October 3, 2009:  This additional rotorcraft is powered by a Bombardier snowmobile engine.  That is a French word from Canada pronounced as BOM-BAR-DE-AY. 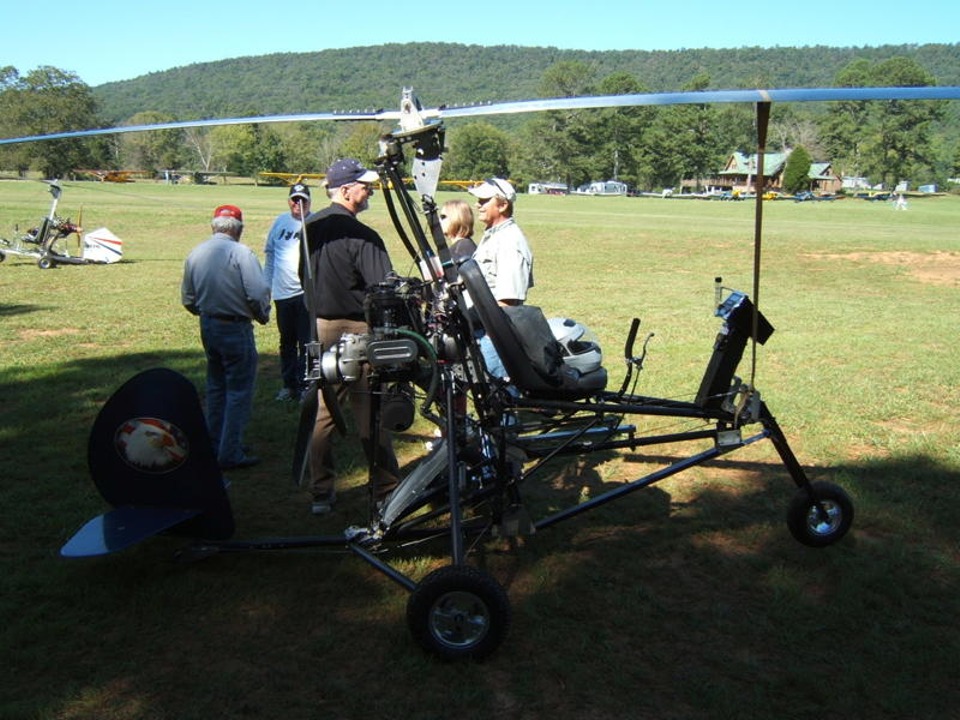 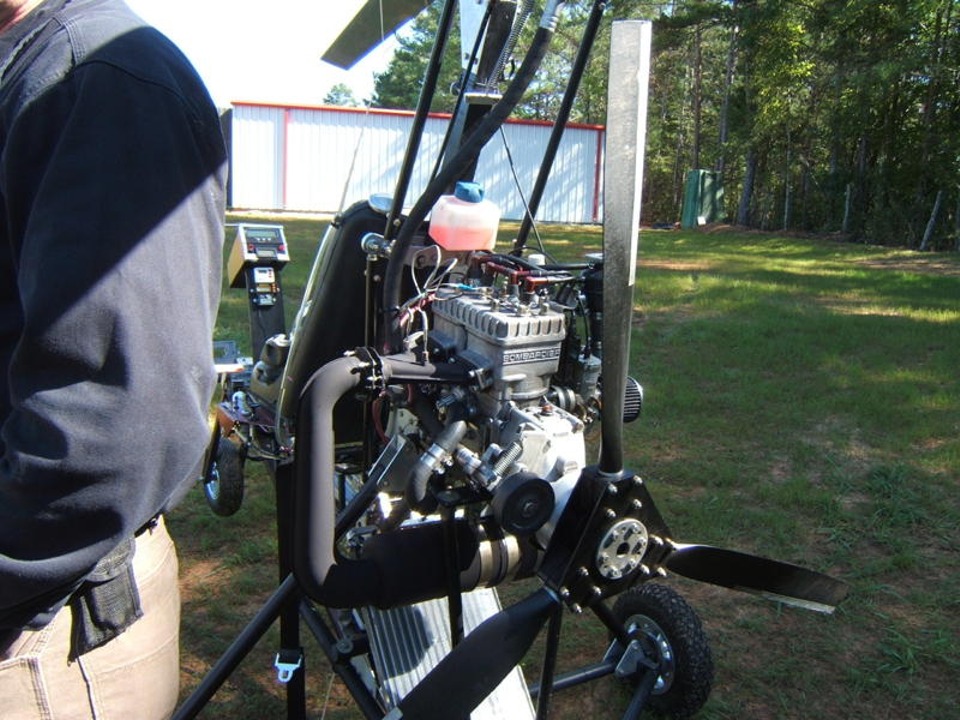 Marty and the guys are watching a few additional arriving airplanes during lunch.  Rich is in the chow line.  He and Marty had some good conversation about their time as military pilots.  Rich flew a lot of time in KC-135 jet tankers for the US Air Force.  Marty flew out of Italy in the 1960's patrolling off the cost of Albania when it was very much a Communist country. 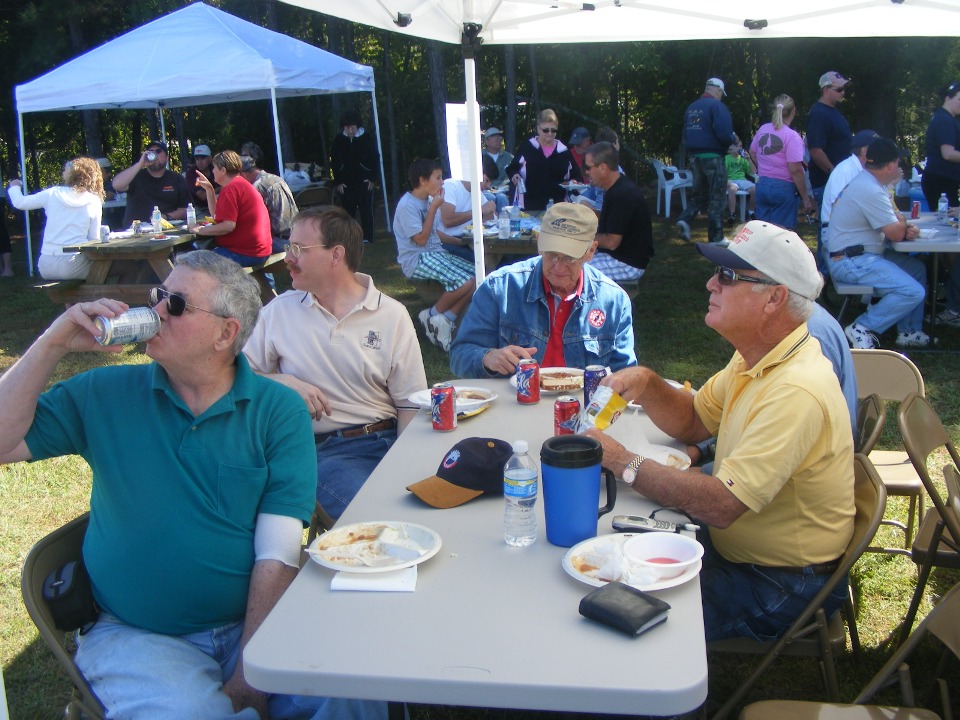 The parking on the west side of the field had about 10 RV's.  There is a blue Husky with Tundra tires over there near the left side of this photo.  A number of light sport and ultra-light airplanes also came.  There were two Beech V-tail Bonanzas in attendance.  Only one of them is in this photo. 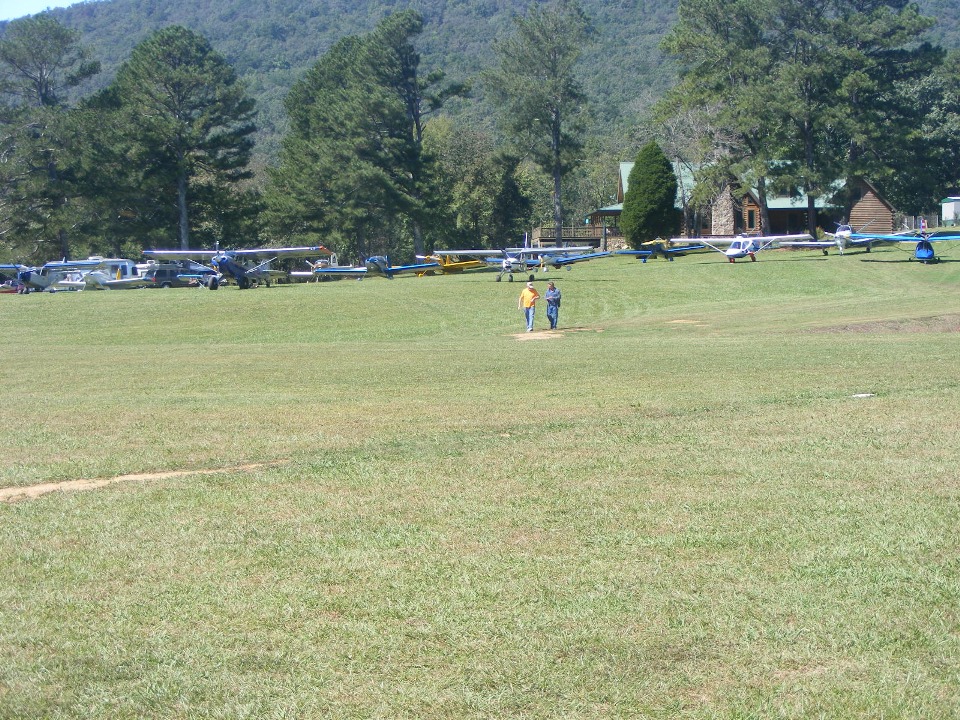 There were a number of Cessna 172's parked near the north end of the field. 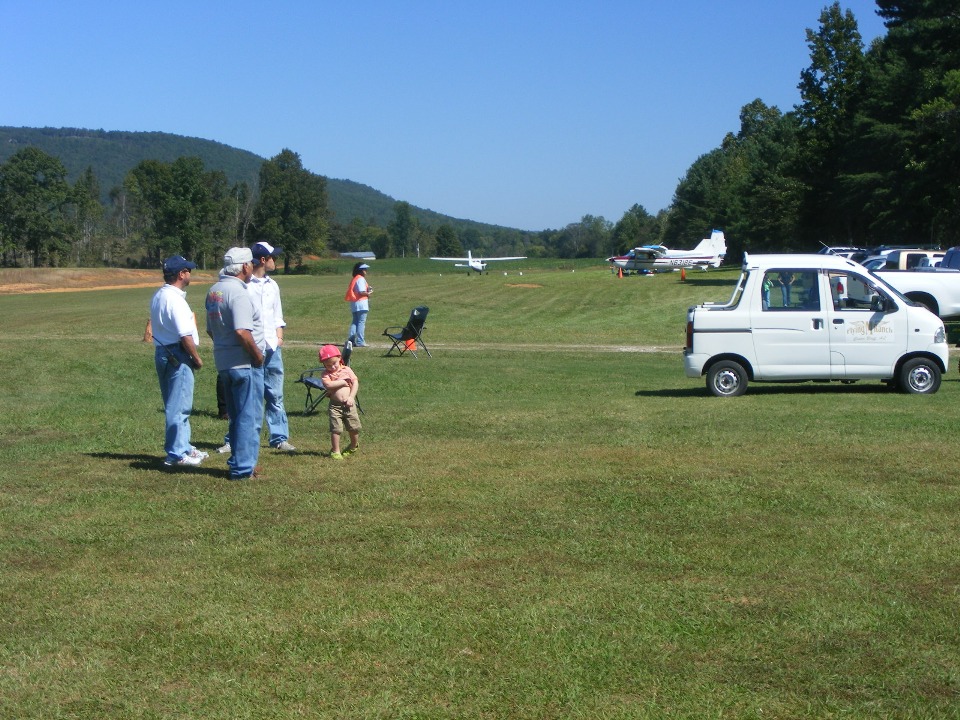 After I finished my lunch I got up to take some photos of the crowd still in the chow line.  Marty and I were first in line because I had already registered my airplane and gave my donation well before lunch time.  The registration table was at the head of the chow line.  John Myers sells hats and tee shirts with his Flying M Ranch logo and information on them.  Those were available at a table at the hangar side door. 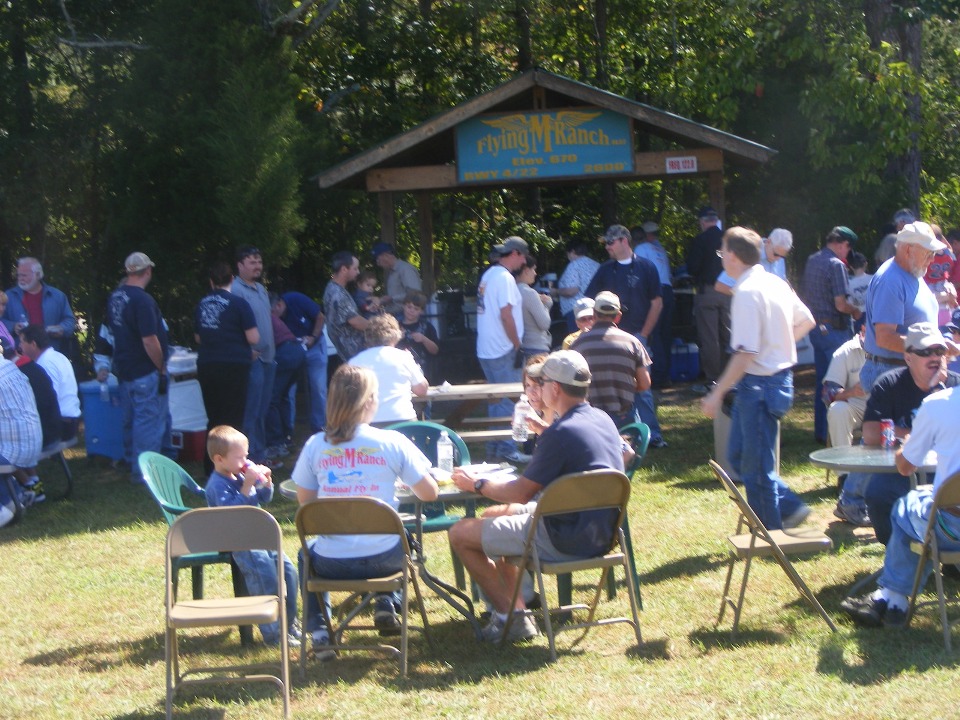 Here is another view of the dining area looking toward the north from in front of John Myers new hangar. 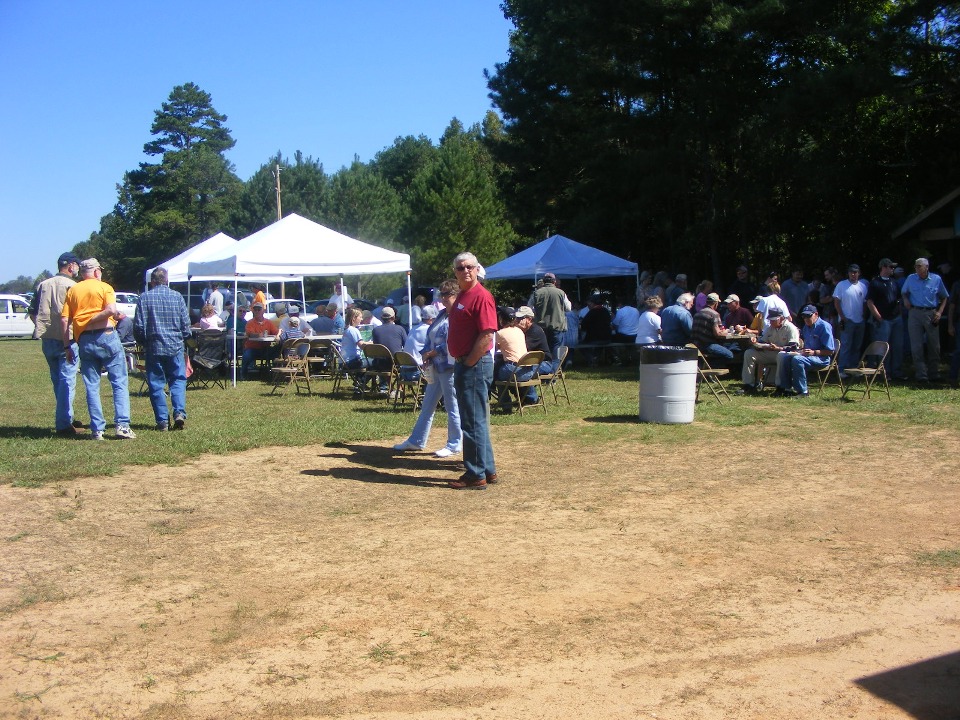 Inside the new hangar is John's RV-8 which I have featured in these pages previously.  The red and white airplane is a Cessna Cardinal. 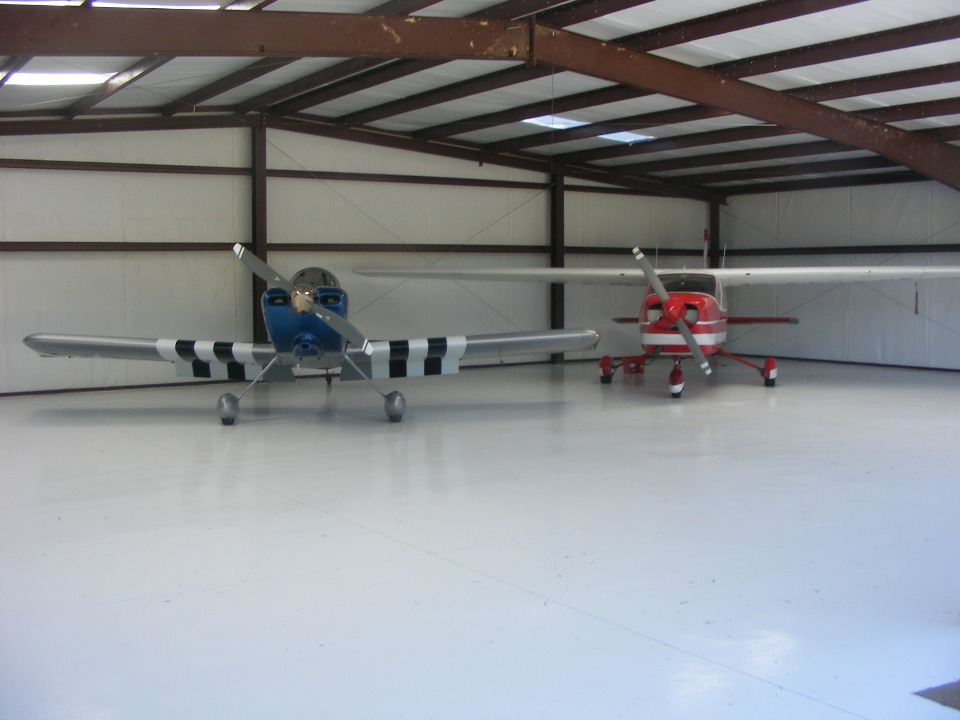 This RV-8 painted like a World War II P-51 Mustang arrived at 11:46 AM Central Time.  He executed a perfect wheel landing. 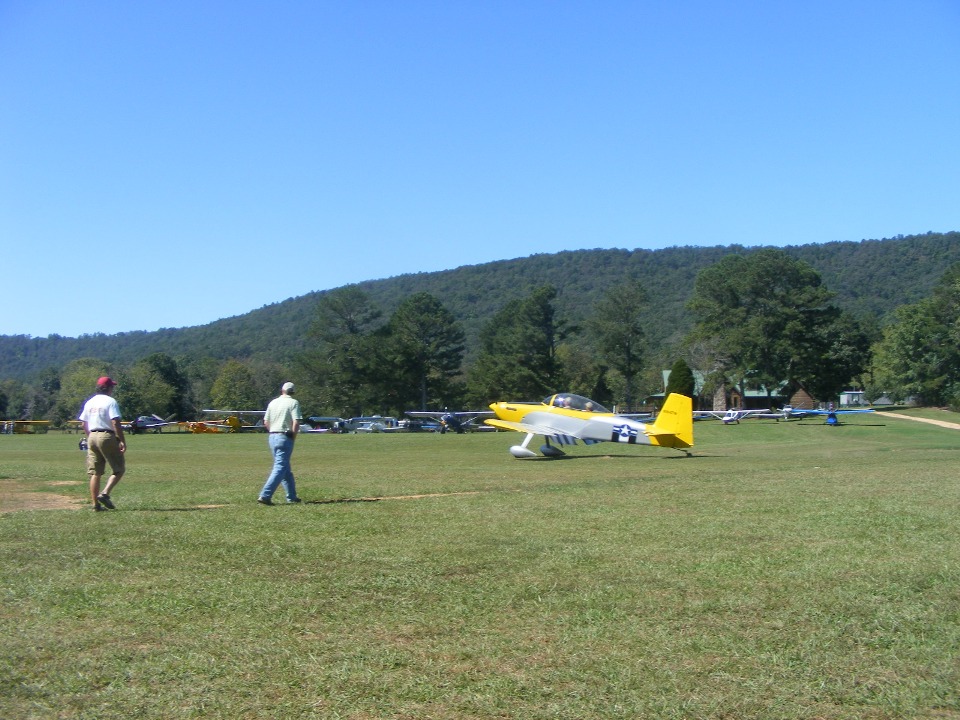 I made sure to thank John Myers for accepting us all to this home field.   That is his home in the background behind my airplane and Wendell's.  The last time I was here, lunch was served at the house with many tables set up on the patio deck and down below where the chow line was located.  I took this photo at 12 noon Central time as Marty and I were preparing to leave.  We are going back to Lawrenceville to pick up some house keys to his father's home in Rutherfordton, NC.  We are going up there so he can check on the house and set the thermostat for winter.  With the weather as good as it is today, it is a good enough excuse to fly some place new for me. 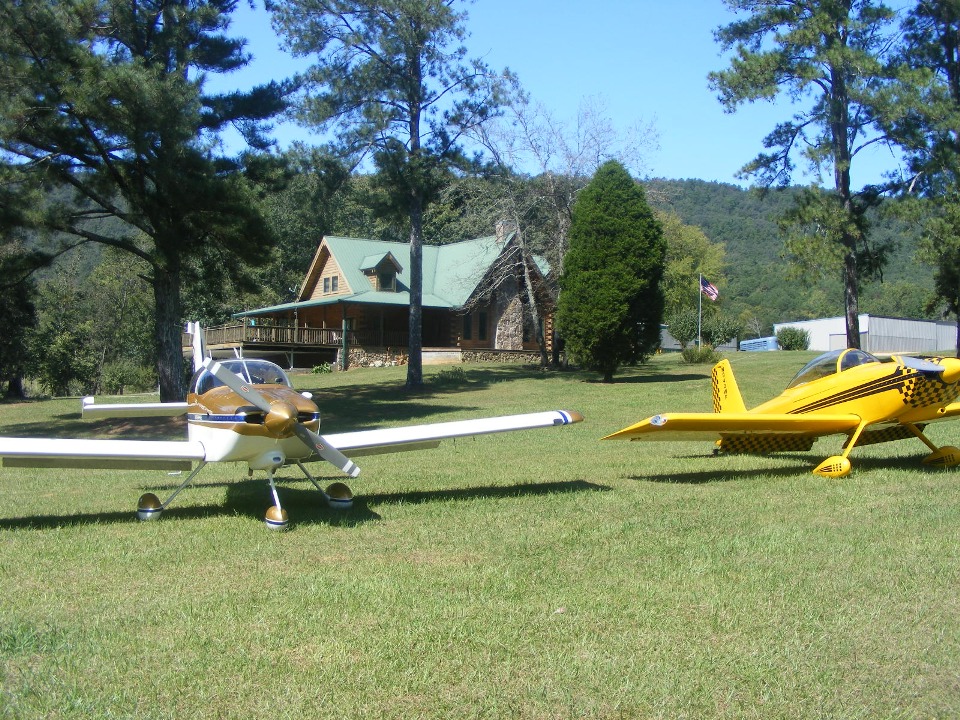