October 3, 2009: When Marty and I were walking across to the west side of the field to leave, he realized his camera was no longer clipped on his belt.  He went back to the lunch area to retrieve it.  He took this picture from the west side of the landing strip of the "P-51" RV-8 as it was taxiing out for an after lunch flight over the field. 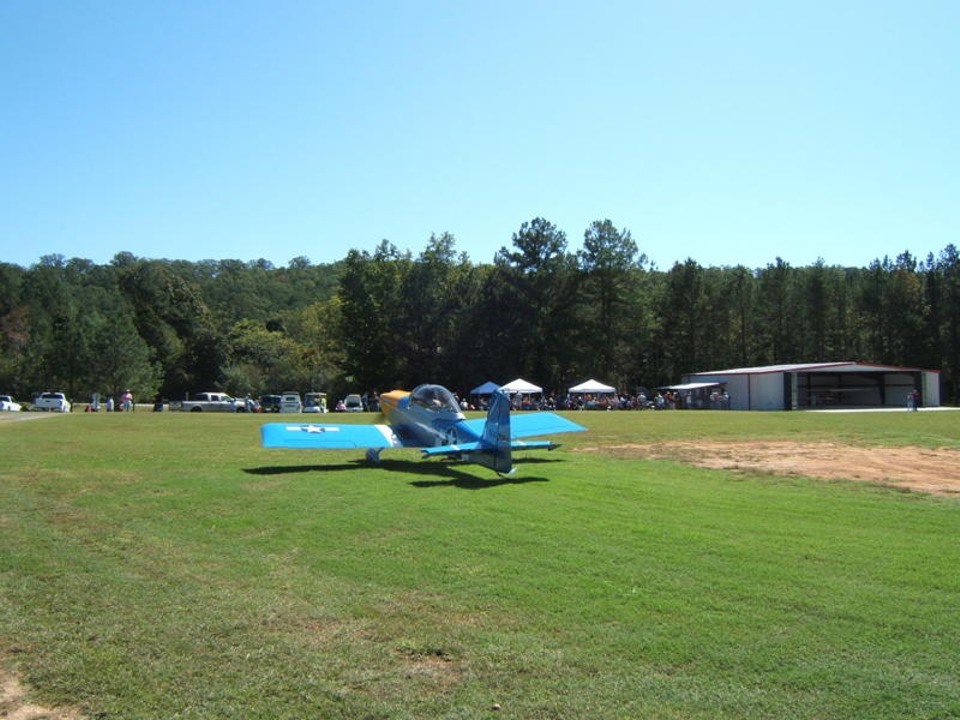 This RV-4 was also to be a part of the lunchtime aerial entertainment. 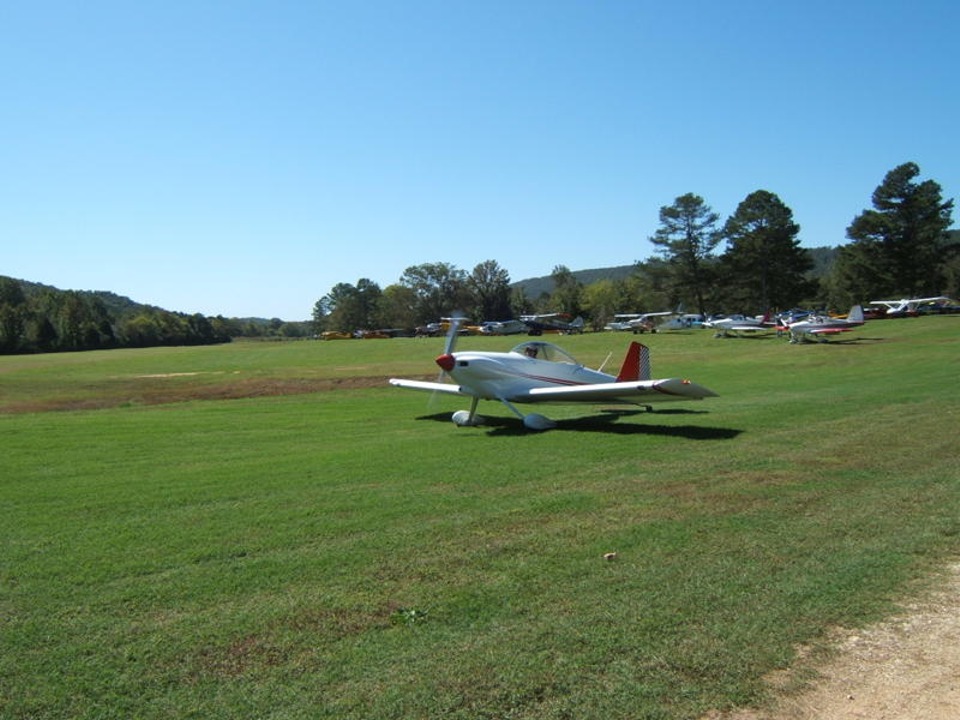 One local steam engine enthusiast brought this trailer with different sizes of old farm machinery engines.  You can see the largest one is chugging along the old-fashioned way as they did before Henry Ford popularized the internal combustion gasoline engine. 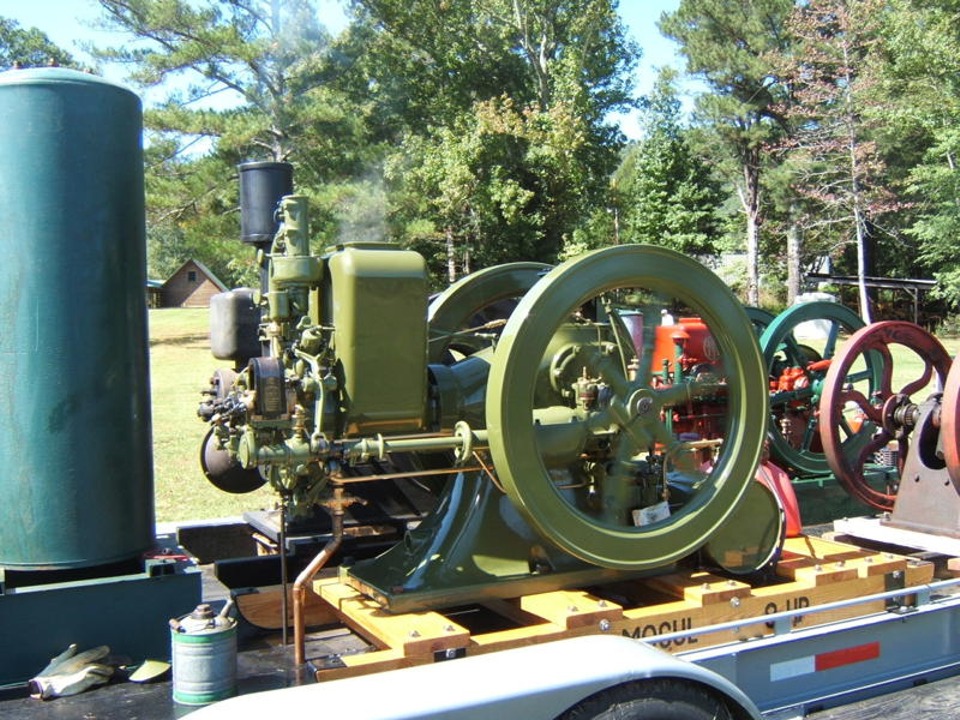 This view looking East puts things in perspective with the location of the dining area tents and the new hangar seen on the previous pages. 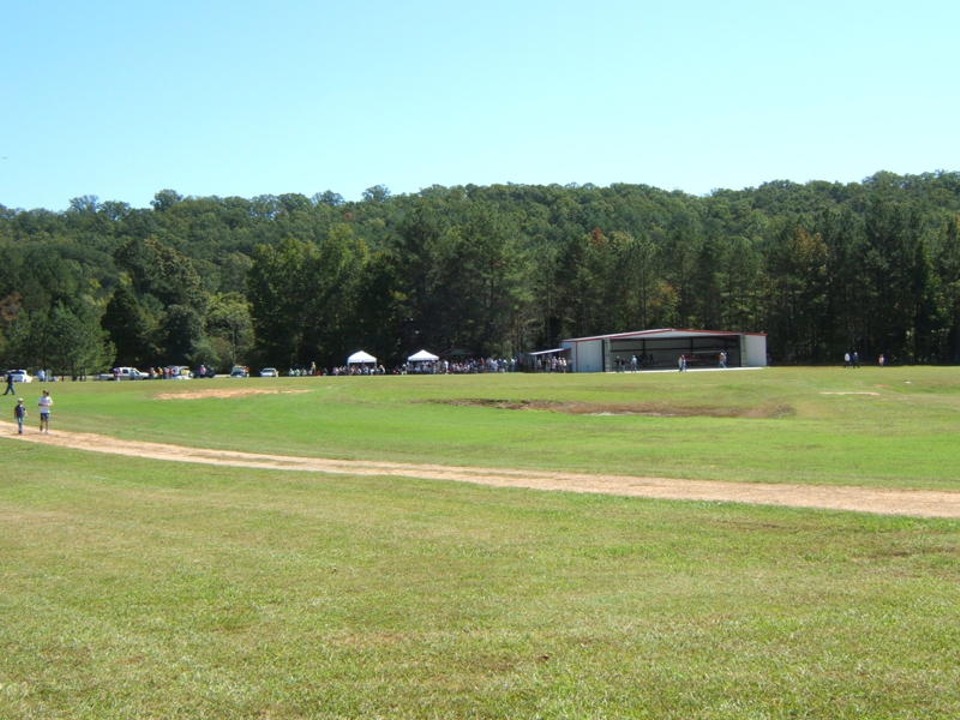 This view shows the back row of airplanes where we parked early this morning.   One of the Beech V-tailed Bonanza airplanes is parked on the end of the row.   Another RV is just beyond the Bonanza.  The maroon color of Rich Nadig's Harmon Rocket almost makes it invisible.  Wendell's yellow RV-8 is next in line with my RV-9A just barely visible before the silver motor home. 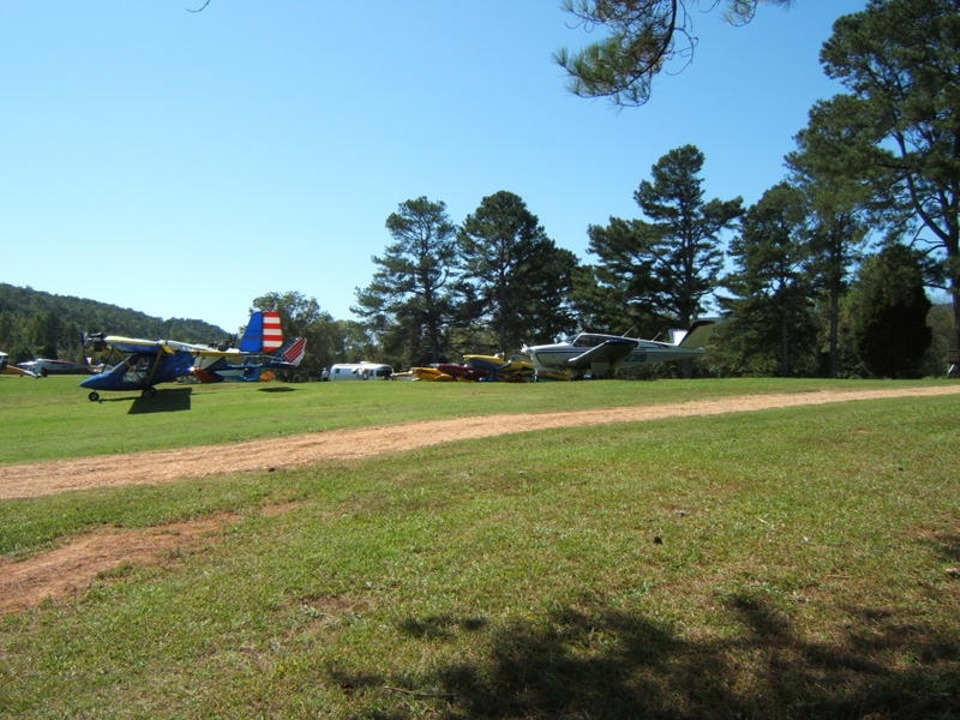 One of the ultra-light airplanes is on the end of the second row with the red, white, and blue tail.  The Rotax engine is mounted up in front of the wing.  The front row shows a couple of RV's on the end, and experimental high-wing, a Cessna tail-dragger, another expermental, and just barely visible on that row as seen in front of the ultra-light, is the other V-tail Bonanza. 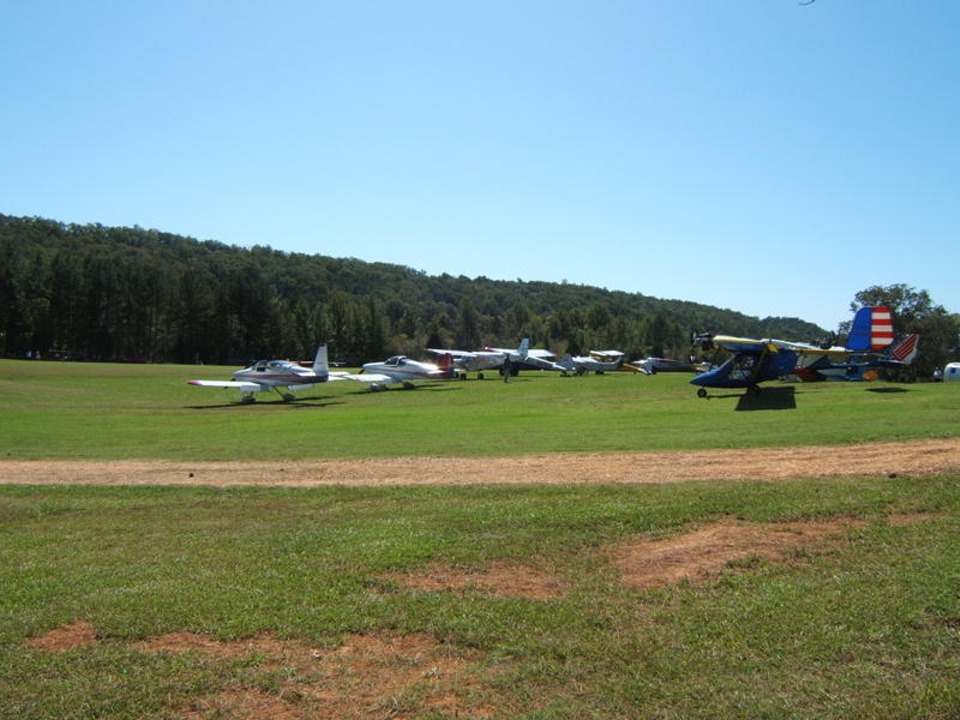 The RV-8 and RV-4 that were parked in front of my airplane were up doing some fly-bys and mild aerobatics for the crowd.  The open space where they were parked made it easy for me to get out for departure. 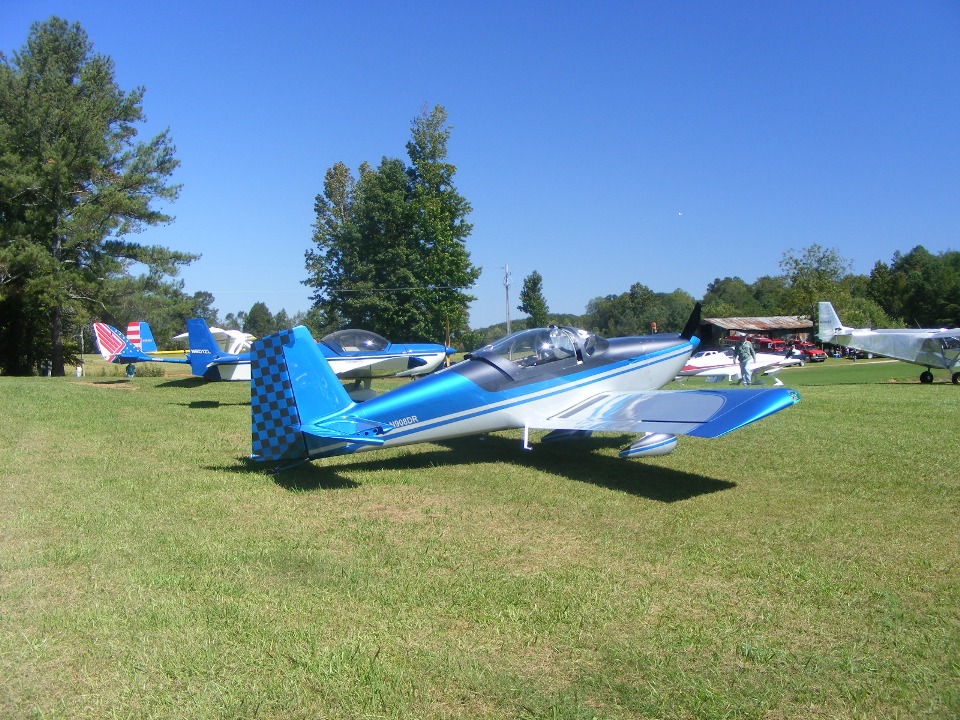 Heading back to Lawrenceville, I climbed to 5,500 MSL again to take advantage of the good tailwinds.  This photo is taken at 1:32 PM as we were crossing the town of Cartersville.  The ground fog has dissipated and we get a good view of the dam at Lake Allatoona.  Interstate highway 75 and US 41 are on this side of the lake.   That is the Etowah River flowing from the dam toward our position, and continuing west to Rome, Georgia. 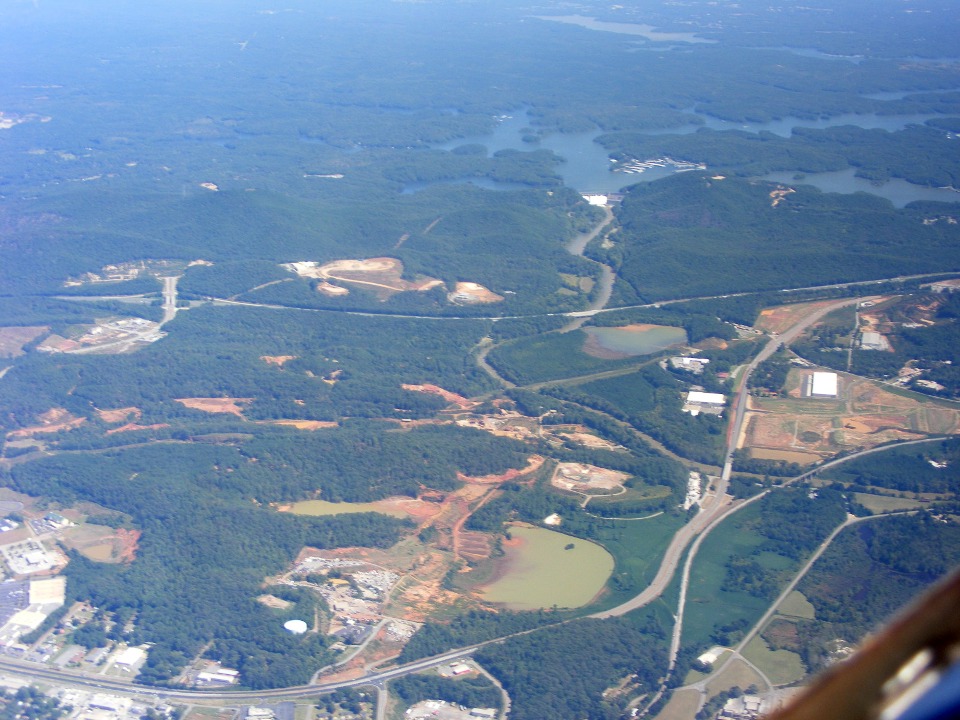 I had Marty flying the airplane as I took a series of photos of Allatoona Dam.   I took this photo about 1 minute later and processed the photo for contrast and balance.  You can see the white water from the flood gates coming over the top of the dam. 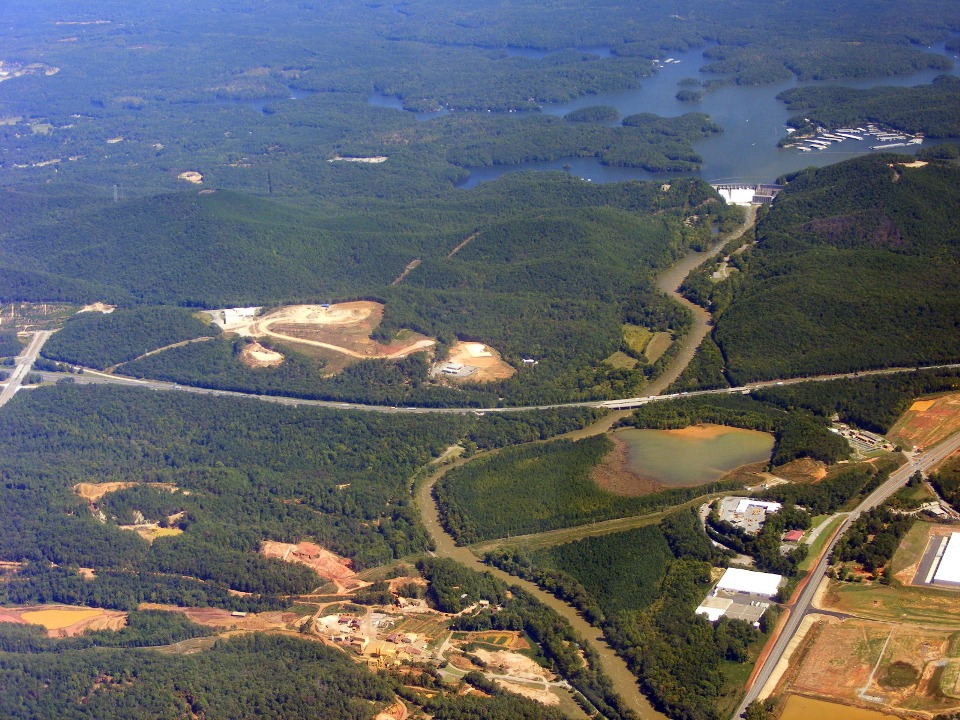 I took this photo less than a minute later with the camera lens zoomed a small amount.  The electric power house is at the bottom right side of the dam adjacent to the flood gates spillway. 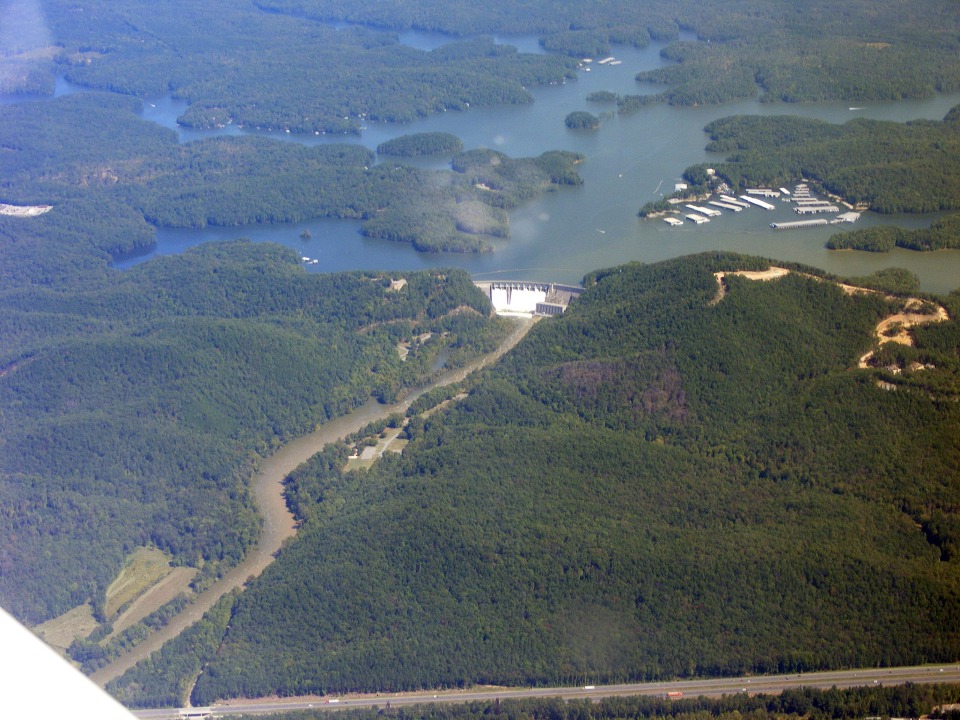 I took this one with the lens set at full zoom and it shows in the lack of sharp focus. 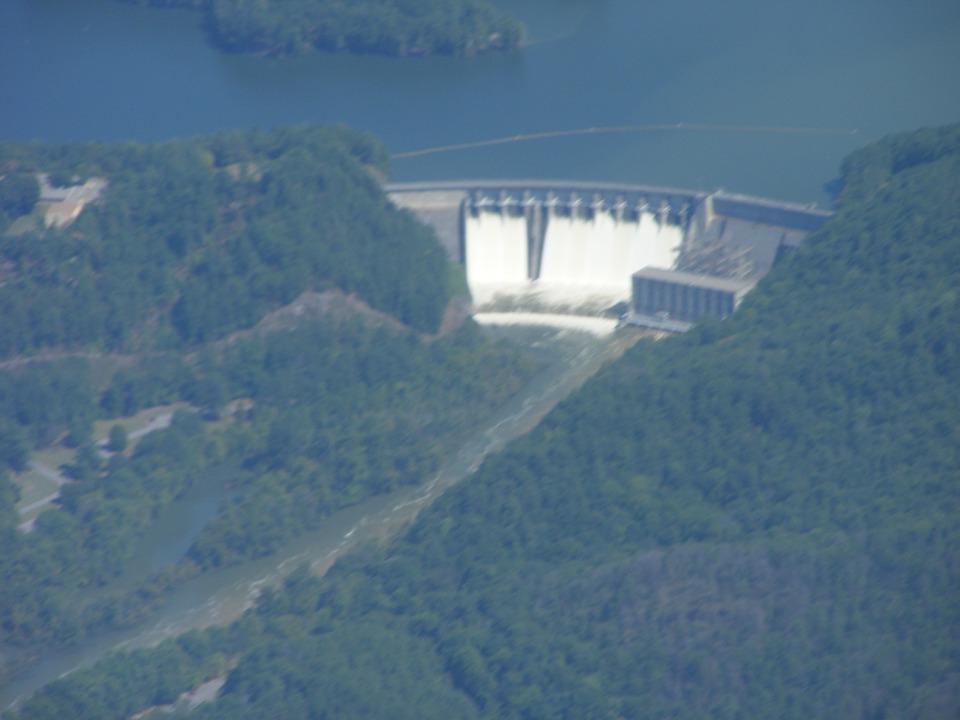