January 1, 2009:  We had a nice long lunch with exchanges of stories about recent events in everyone's lives.  Marshall and Edward exchanged emails and phone numbers since they have some similar interests.  One topic of interest was their choice of phones with enhanced features, etc.  Back at the airport, the required family photos in front of the air terminal were made.  Ian did not want to look up due to the bright sunshine. 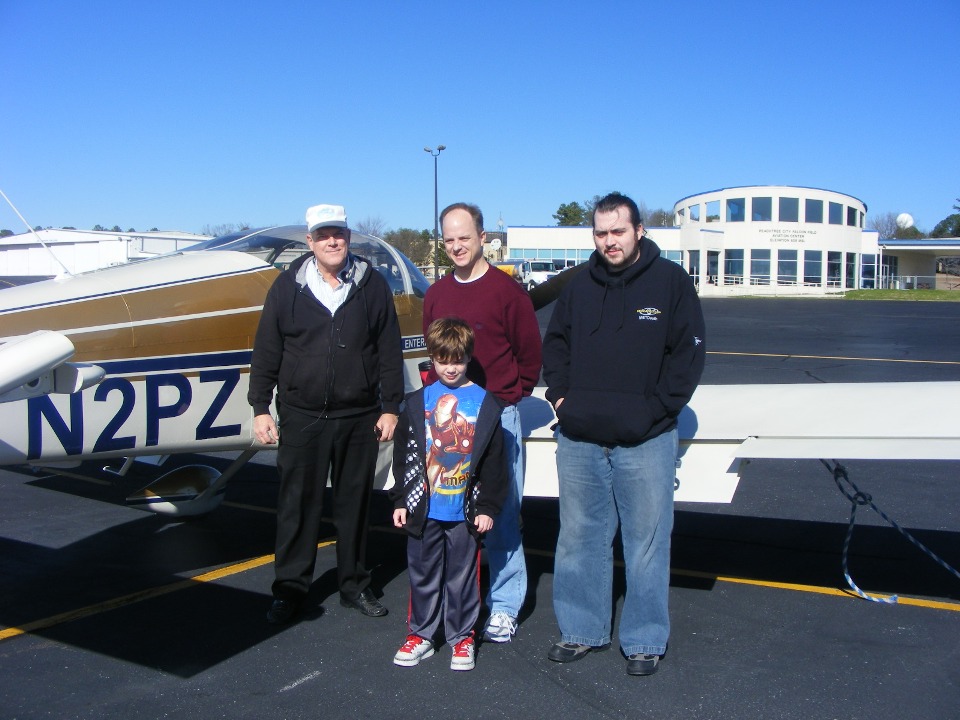 Of course I had to take one more with Edward's wife Julie in this photo. 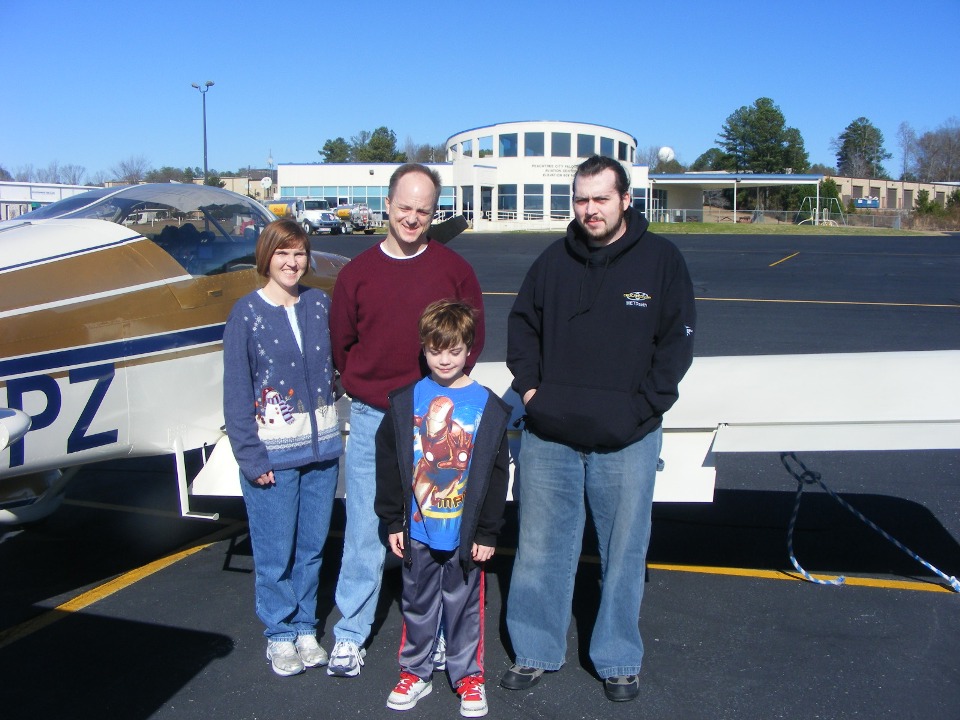 Edward declined my offer for some takeoff and landing practice and we all headed our separate ways.  Marshall was again using my camera to take some additional pictures during the flight back to McCollum Field on the northwest side of Atlanta.   This one is just after takeoff from Falcon Field.  Atlanta's bedroom communities continue to grow and fill in the forested areas around the city. 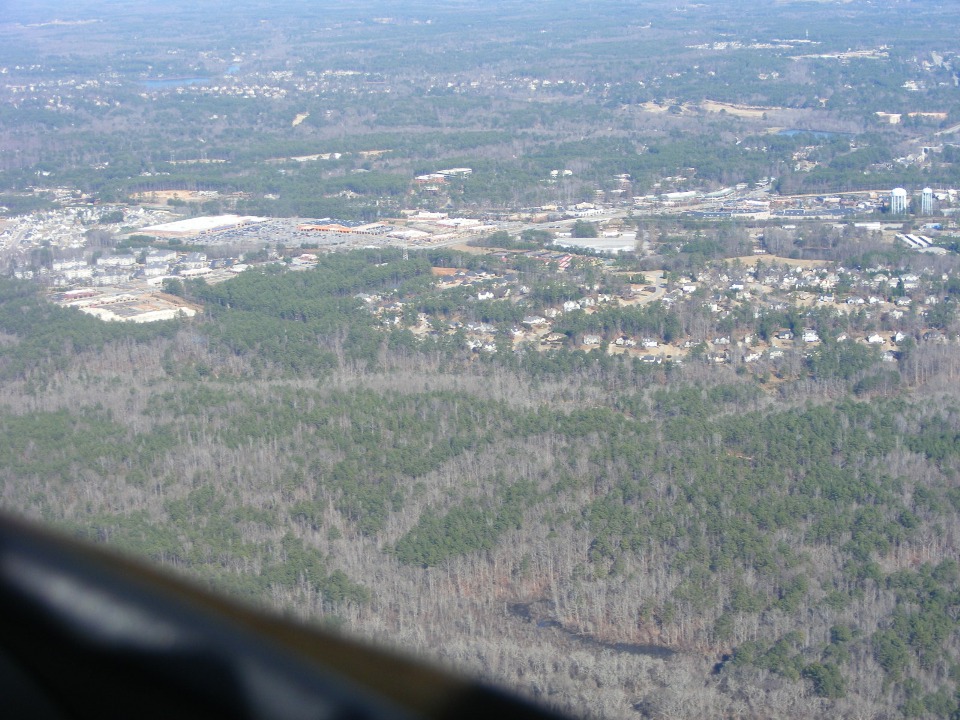 This telephoto shot of the Atlanta skyline has been enhanced for contrast to provide some clarity.  This was taken from an altitude of 3,000 MSL and from a distance of about 20 miles away. 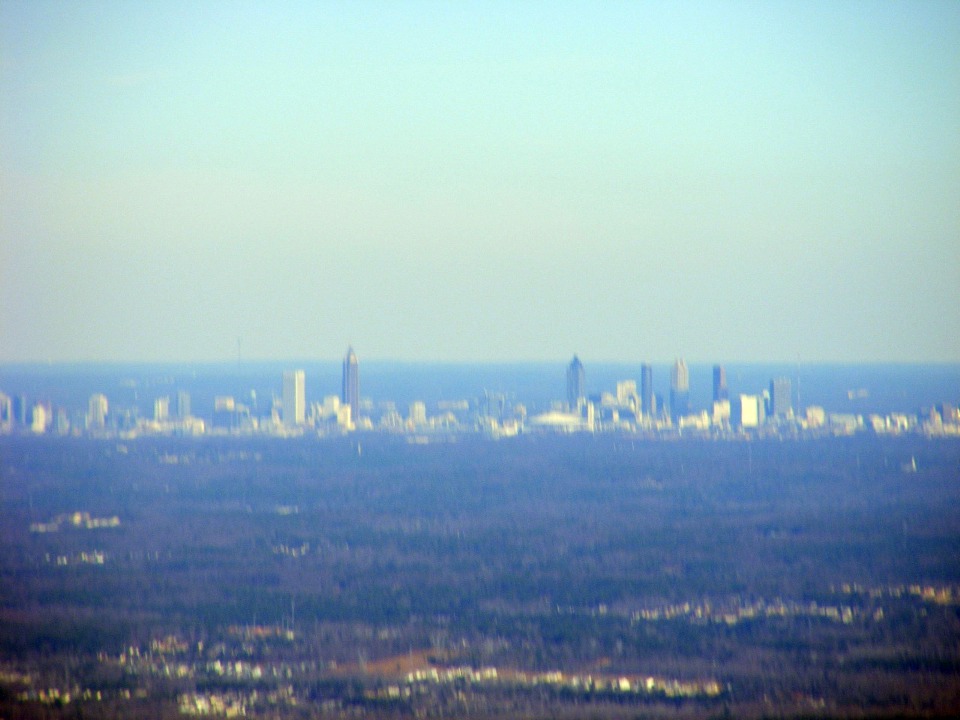 The second stop at McCollum Field was a short one as before.  Marshall and I said our goodbyes and  I had the engine running and headed out with another five minute stop.  The ride home was about checking out my SL-30 NAV/COM radio.  I was happy with the COM features working correctly again during the trip south earlier today.  I had dialed up the ILS/Localizer frequencies at KRYY and KFFC and everything was just fine.  It was not until I headed for home on the last flight segment that I realized the OBS knob on my GI-106 panel mounted indicator was not being decoded by the NAV section of the SL-30 receiver.  I flew over the runway at Calhoun, Georgia to check the unit again on the localizer, then went up to Dalton (KDNN) to fly the ILS approach.  Both needles tracked the ILS just fine, but when I dialed up the Chattanooga VOR, the OBS knob on the GI-106 resolver was still dead as far as the SL-30 was concerned.  I could push the OBS button on the SL-30 and dial up the bearing there with the radio knobs and the corresponding digital display on the radio.  The needle on the GI-106 would also respond to those inputs on the radio.

When I landed back at Folks Field, I sat in the airplane outside the hangar for a while with the engine off checking the setup menus of the SL-30 trying to resolve the issue with the GI-106 to no avail.  Wendell had gone for a flight in his RV-8 with a friend in the back seat.  They returned just as I was finishing unloading the airplane and getting ready to leave for the day.  I did not get a chance to swap radios with Wendell to check out my panel wiring with his SL-30, and my SL-30 in his airplane to see if the problem is internal to MY SL-30. 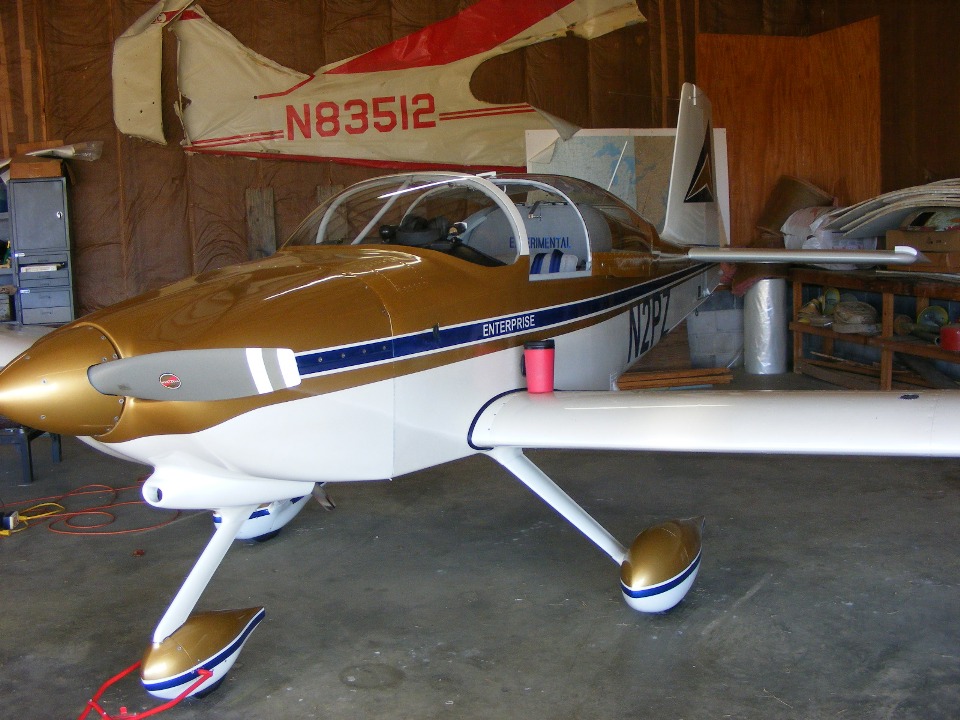 The four flight segments today added a total of 2.6 hours to the Hobbs meter on the Enterprise.

January 2, 2008:  I went over to the airport around noon time today to try Wendell's SL-30 in my airplane to prove that my GI-106 resolver would work with his NAV/COM radio and it did.  At this point I was wondering why my SL-30 unit did not work with the GI-106.  I took it out of the airplane in case I would need to send it back to Garmin AT.  Once more, the radio stack has an empty location. 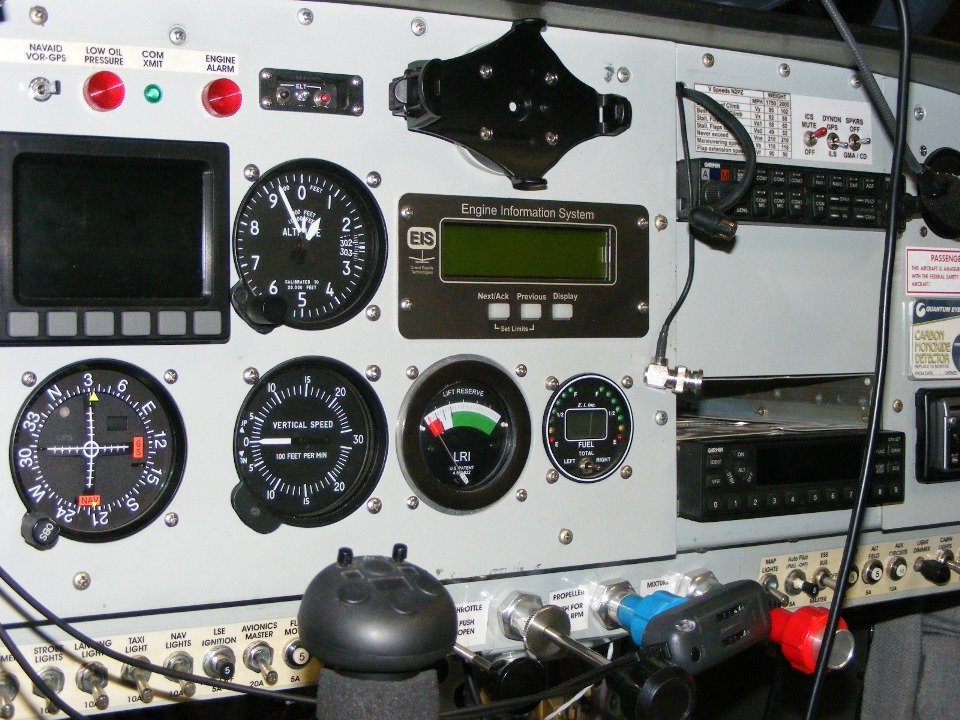 I also took care of a minor maintenance issue with the passenger side storage pocket.  I used some spray contact cement to secure the fabric to the aluminum side wall of the cockpit - again.  I then headed for home with my SL-30 in case I have to send it back for additional service. 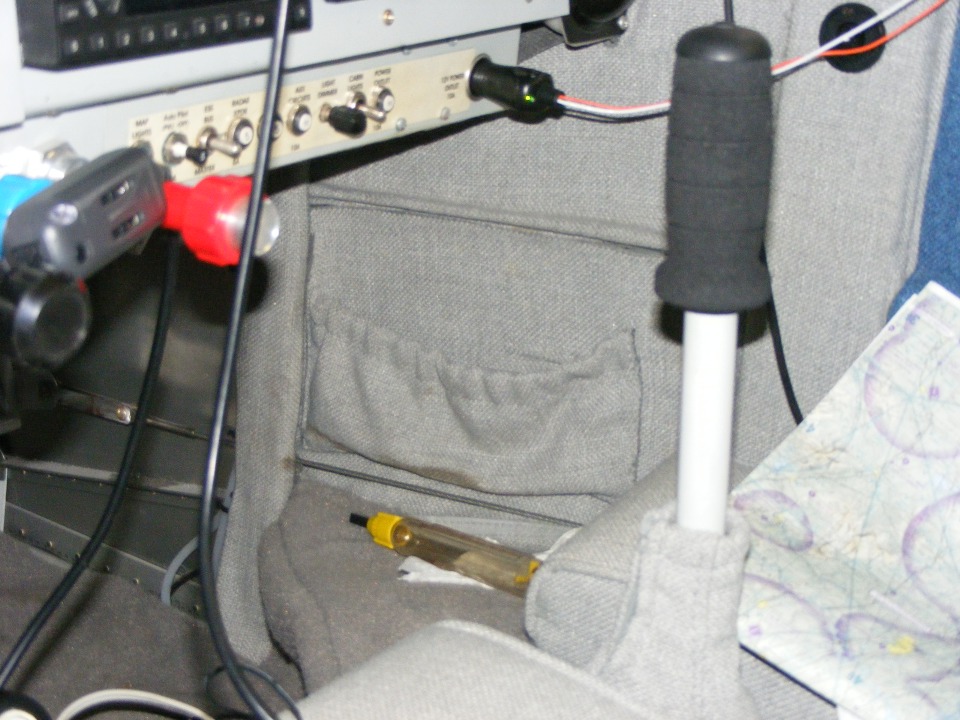 I made a call to the folks at Garmin AT in Oregon when I returned home.  They explained why my GI-106 OBS resolver was not working.  The replacement NAV board has memory on it that needs to be programmed with the data matching my particular GI-106 characteristics.  That memory currently has no data stored in it.  It seems that I needed to run a calibration procedure to match MY GI-106 to my newly-refurbished SL-30.  I had received the installation manual from Pacific Coast Avionics when I originally purchased the radio from Van's way back when.  I had that manual in hand when I was on the phone and verified the setup pages showing the resolver calibration procedure.  I spent some time in the hangar late in the day and got everything squared away with the GI-106.  I also managed to program in many popular COM and NAV frequencies for this region.  It looks like things are going to work much easier for me in the near future.

Speaking of DECLUTTER, I cleared the my cabin of some older prints of towered airports I had downloaded in the past year.  I had the newer ones from my recent flights.  I also brought home some older sectional charts from other regions that are out of date.