October 5, 2008:  Marty continued to take photos as we departed the Tennessee River near the point where the Tennessee, Alabama, and Georgia state lines all come together.  We both commented on the lush green forests that are common in this part of the southeastern USA. 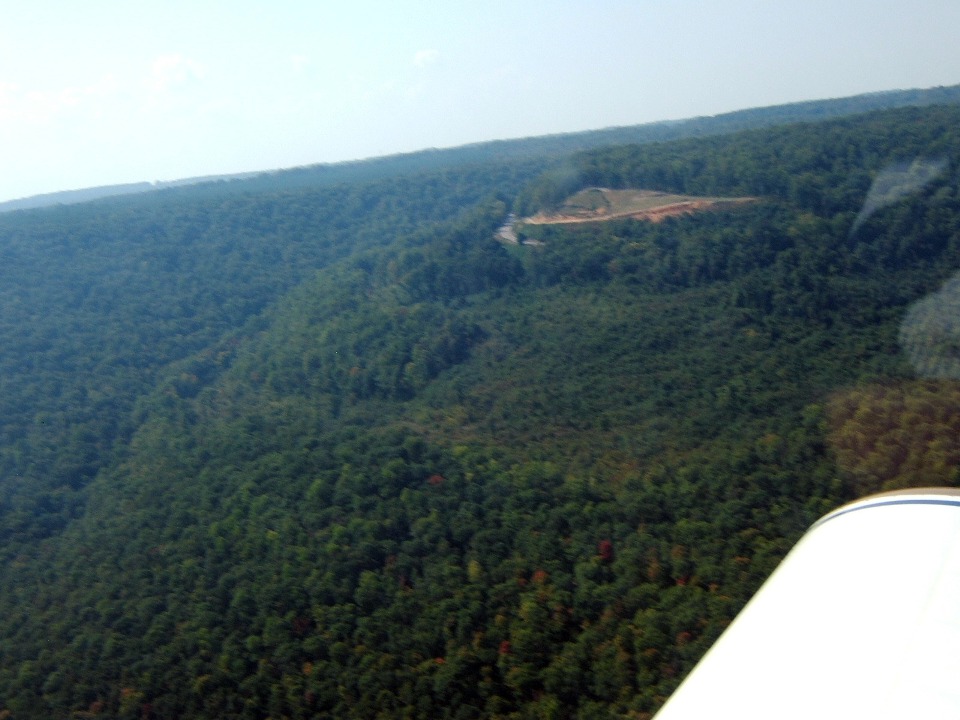 We headed a bit SE near the north end of Sand Mountain in Dade County, Georgia.   My maternal grand parents raised my mother and her two older sisters in this area.   Since we were so close, I thought I would fly over to see what new changes have occurred recently.  The valley beyond this mountain plateau has US 11 and Interstate 59 running SW toward Gadsden and Birmingham, Alabama. 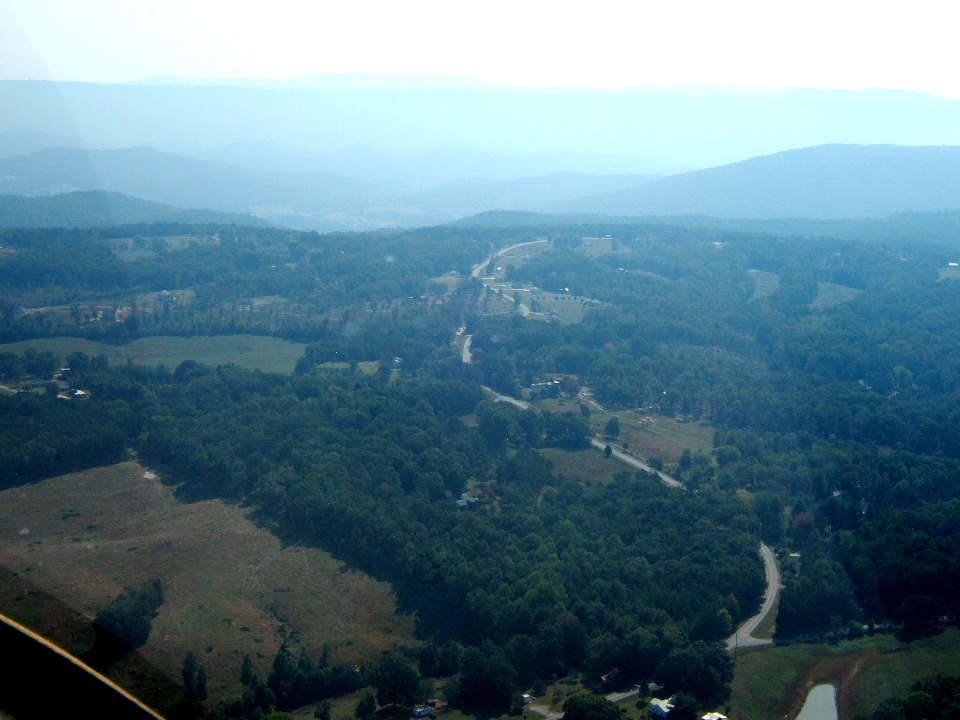 Marty kept snapping photos as I started my bank turn to approach the old home place.  I cannot accept the idea so many folks have built homes up on this part of the mountain.  My childhood memories are from the 1950-1960 era.  A lot can change in 48 years. 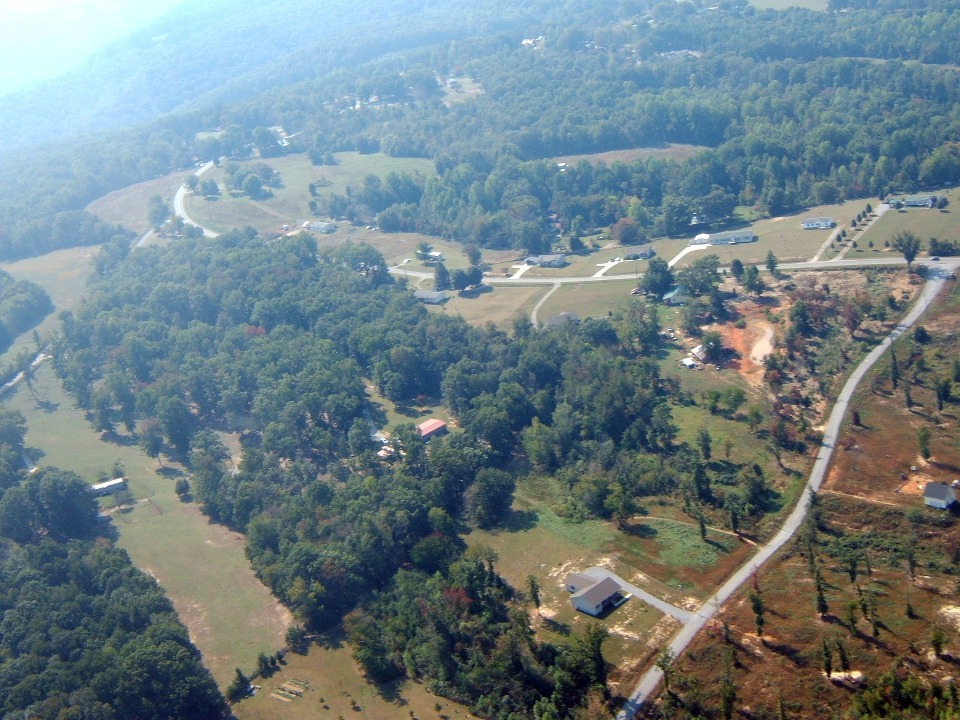 The old place finally comes in to view as I fly above the sloping bluff on the East side of Sand Mountain.  This view shows the flat-top of this mountain plateau that runs for well over 100 miles toward Birmingham. 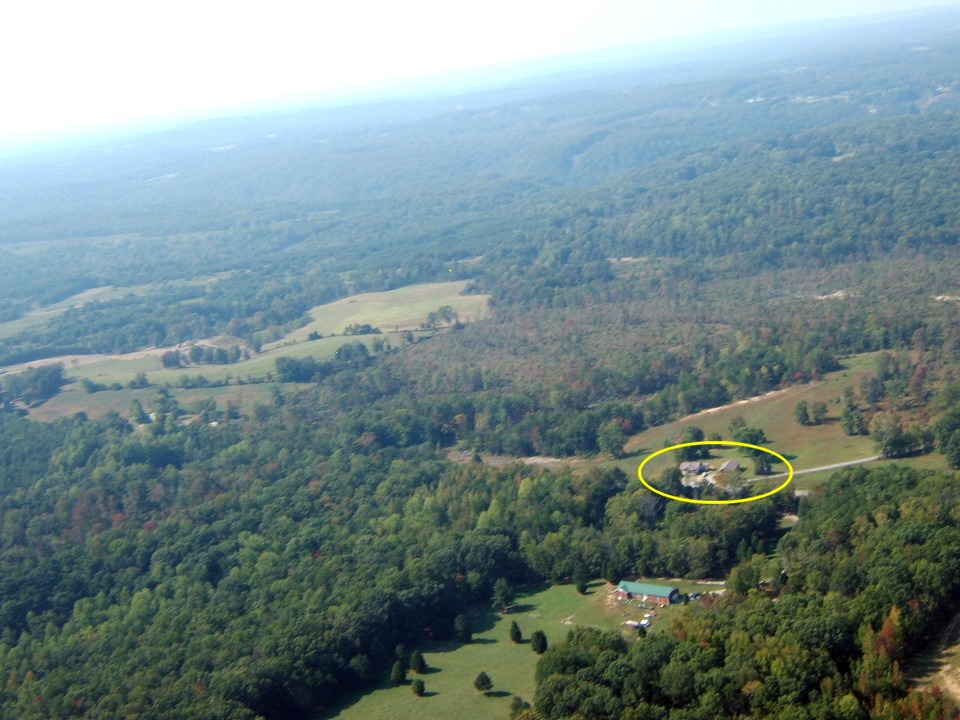 We approached from the direction at the top right edge of the photo.  The Tennessee River is just a few miles up that way. 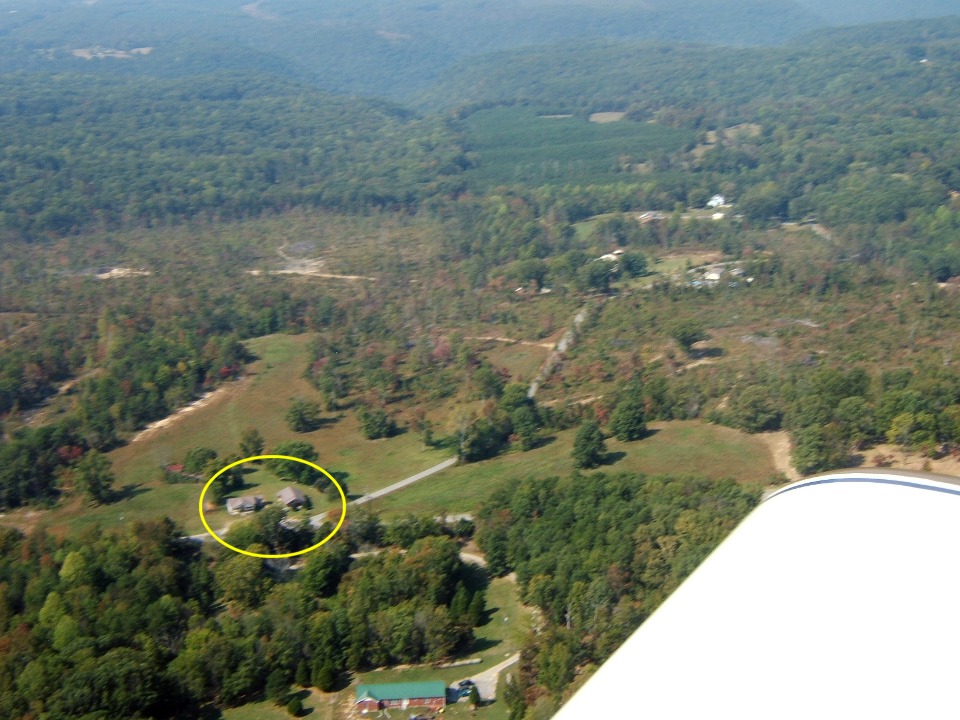 I really need to drive up here in my car soon to see the changes up close.   The two buildings in the circle are on the old home property.  The larger building closer to the route of flight is the "new" country store built in the late 1950's.  That is why there is a large driveway/parking area in front of the buildings.  The other building near the top of the circle was the first building with a large room that was the store on the north side of the structure.  The residence occupied the south side and back of the old building.  My grandparents started selling gasoline from Standard Oil of Kentucky back in 1947, the year I was born.  In those days, most auto fuel contained lead and was available in Regular (93 octane) and Ethyl (100 octane).  The only unleaded fuel of that era was from Amoco - that "white gas" with no color added.  Of course, the earliest prices for gasoline were 26.9 cents for regular and 31.9 cents for premium 100 octane.  My, how things have changed in 48 years. 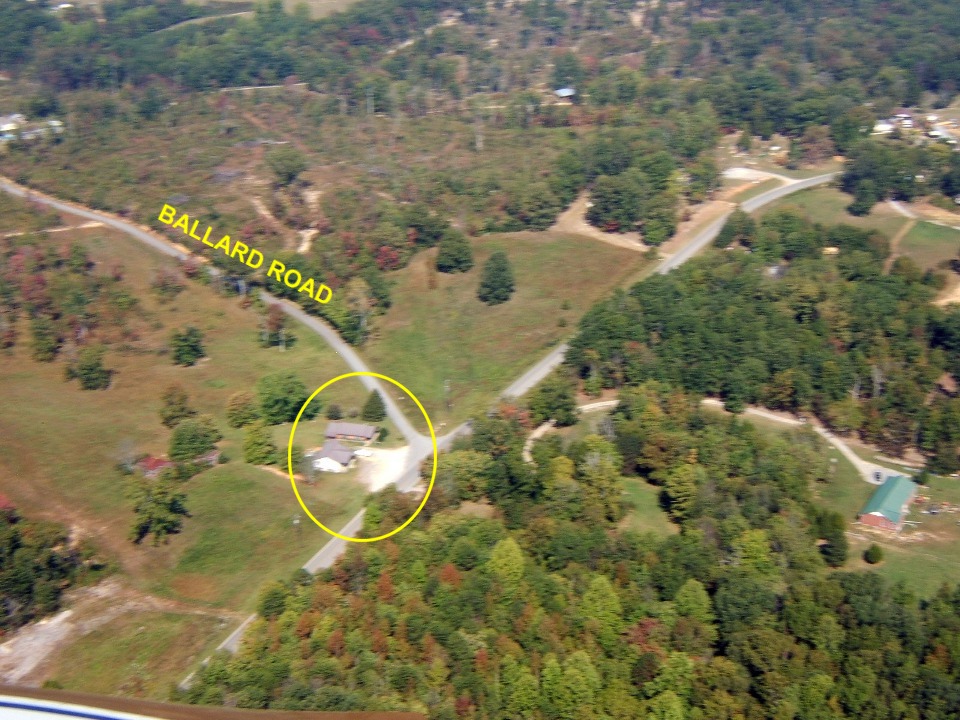 It was time to say goodbye to childhood memories and get on with today's flight.  We retraced our route a few miles NW and back to the Tennessee River near the TAG border point (Tennessee-Alabama-Georgia). 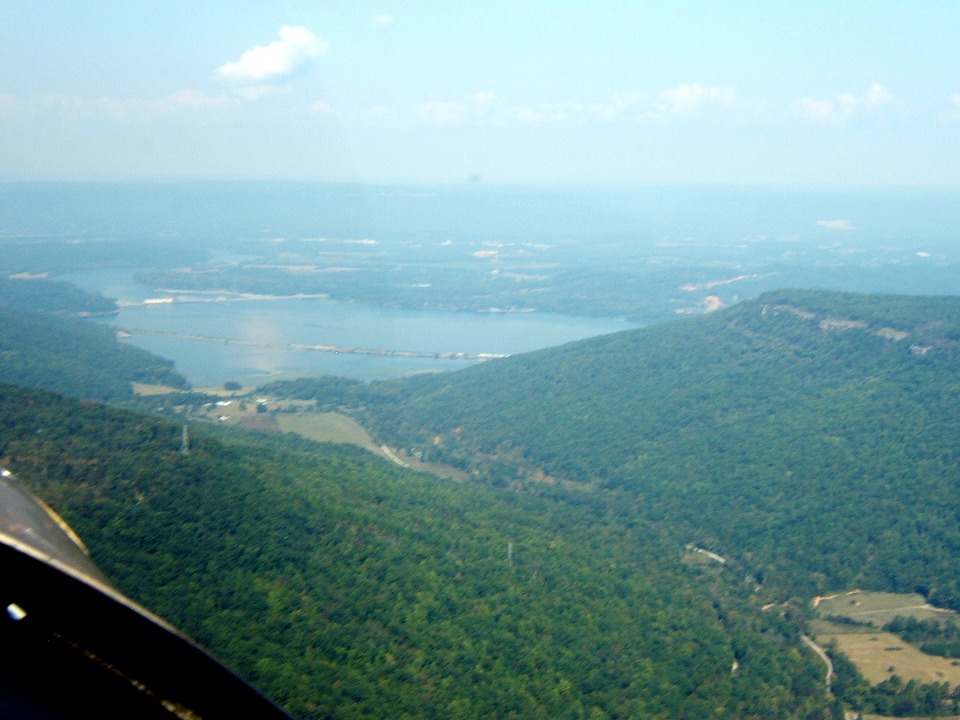 That is the Tennessee River where it turns south near South Pittsburg, TN.   And yes, the local high school team is the "Pirates" in case it matters.   I get the idea it is not in honor of the Pittsburgh Pirates from Pennsylvania, but may refer to river pirates from the 19th century.  But then again, northern tourists stopped by southern deputy sheriffs in the 1950's may have a different definition of "pirate" due to personal experience.  The area is still a speed trap for those folks on the highways.  I love flying at 140-160 MPH with no worries about cops. 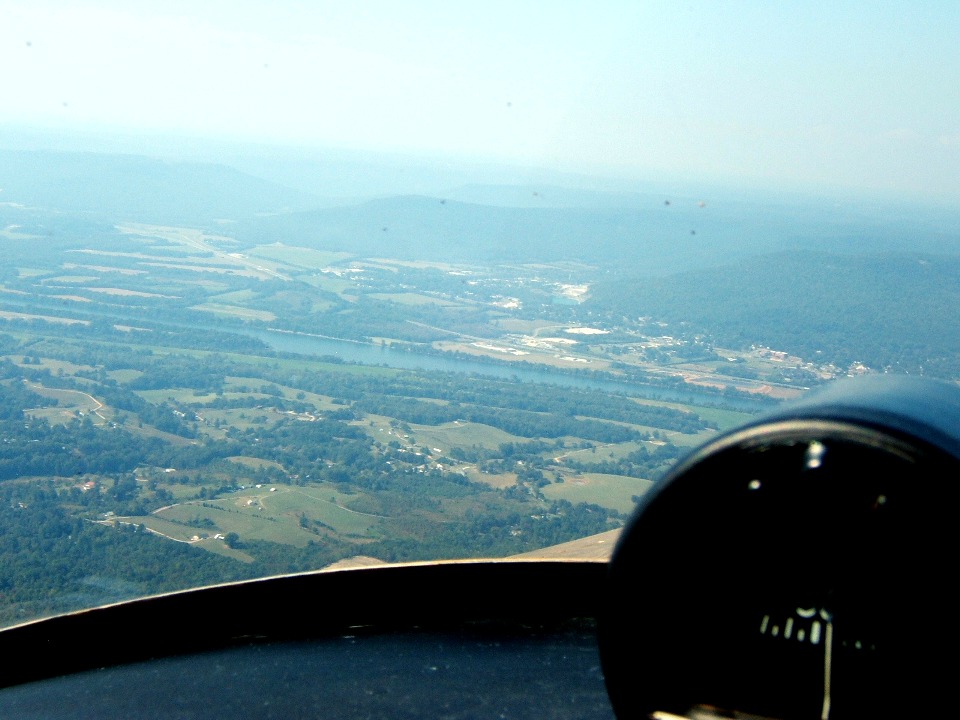