September 16, 2007:  Sunday again after two weeks of business travel on the road -- not really.  But my previous page about Summer 2007 started that way.  It is Sunday again, and I was on a long road trip for the company over the past two weeks, but only for 8 days.  It was a trip where I was making several stops along the way from Chattanooga, Tennessee through Mississippi, Louisiana, Texas, and Arkansas.  I had several stops to make in the Dallas/Fort Worth area including a trade show that ran for three days at the DFW Hyatt Regency Hotel.   I managed to visit several customer facilities during the week, and see my son and his family in Round Rock, Texas over the weekend of September 8-9, 2007.  My return home was late on Thursday, September 13th, just as some much-needed rain began to fall here in the Chattanooga area.  I did not get a chance to visit Doug Reeves on this recent trip to Texas.  I have another DFW business trip planned for October.

When Saturday came, it was time to check on the progress of Wendell's RV-8 canopy work.  I have posted two pictures and text in his web section about that work on his NEW PAGE 62.  As for the other flying news, Wendell flew his Aeronca Champ over to the Moontown Airport (3M5) for their fly-in on Saturday, September 15th.  He had returned before lunch and was waiting in the "airplane factory" when I arrived after lunch.  Since there is some space in the hangar, he has let a friend of his bring his Cessna 172 over to keep it there for a while.   The friend also flew over to Moontown and down to Birmingham, Alabama.  Here are some photos I took as he returned.  I asked Wendell when he would be replacing the old wind sock with the new one he received as a gift from his daughter.  His reply was "when the new RV-8 is ready to fly." 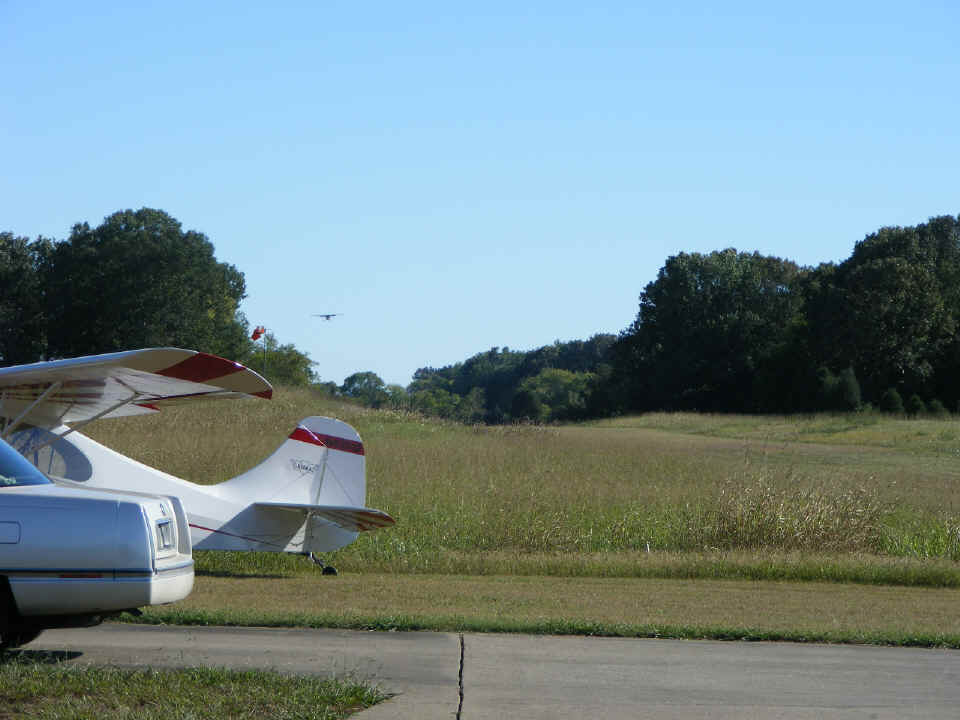 I took both of these landing photos with the camera lens zoomed out a bit. 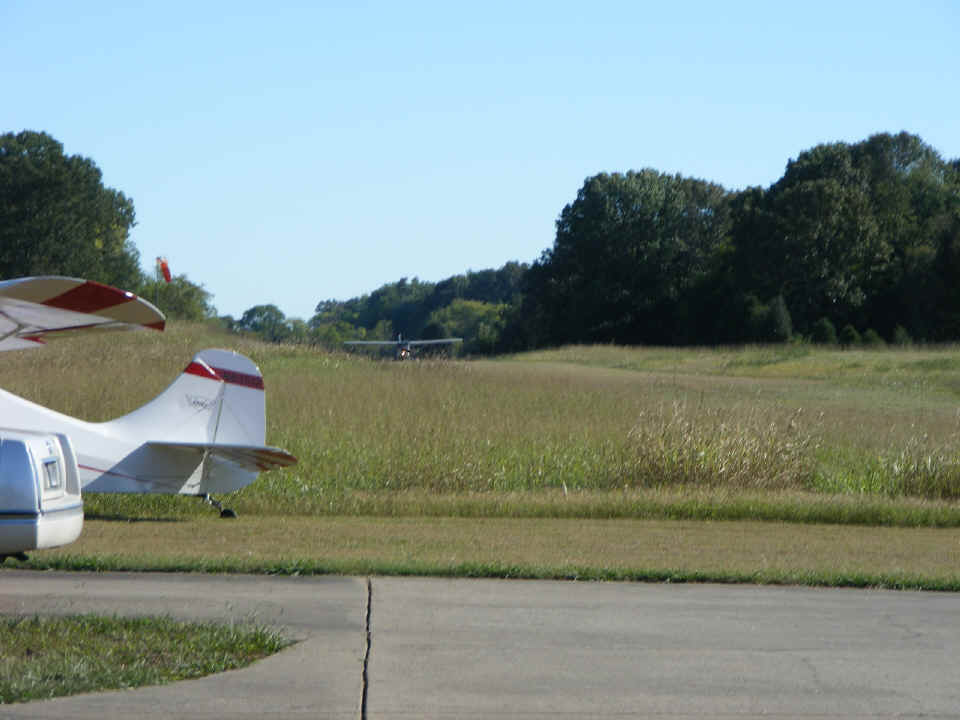 I moved my car out of the way before the 172 was taxied up to the ramp.   There were three guys in the 172 for their trip to Alabama today.  The pilot talked about how the Birmingham ASR radar went out when they were about 30 miles from the airport inbound.  He mentioned there was one small airplane that passed VERY close to them as a result of the ASR radar being out of service. 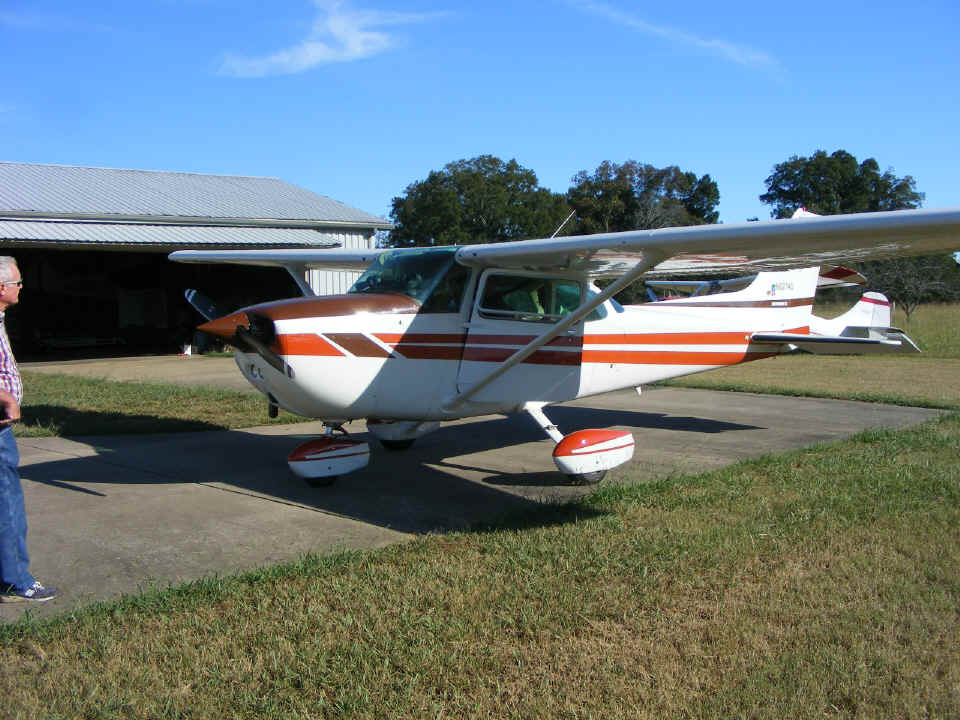 Wendell had several groups of visitors during the afternoon.  One of the groups was my former neighbor and occasional rivet-bucking partner, Ray Johnson.  He brought his wife, baby son, and father to look at the house for sale next door to Wendell's place.  It was the first time that his pilot-father had a chance to see how RV's are built.

September 22, 2007:  Saturday morning was the time to go flying with Wendell to meet a couple of RV-8 builder/pilots.  We started with Jere Rosser in Cartersville, Georgia.  The visibility was less than ideal, but we managed to remain VFR in the hazy conditions.  We crossed the ridges and Dug Gap Mountain just west of Dalton then followed interstate 75 for a while.  That put us in the valley that goes down to Cartersville.  Here is the photo of my airplane parked on the ramp in front of the FBO.  Jere arrived about 10 minutes after I took this photo.  I moved the airplane over to his hangar area to leave more room for transient pilots. 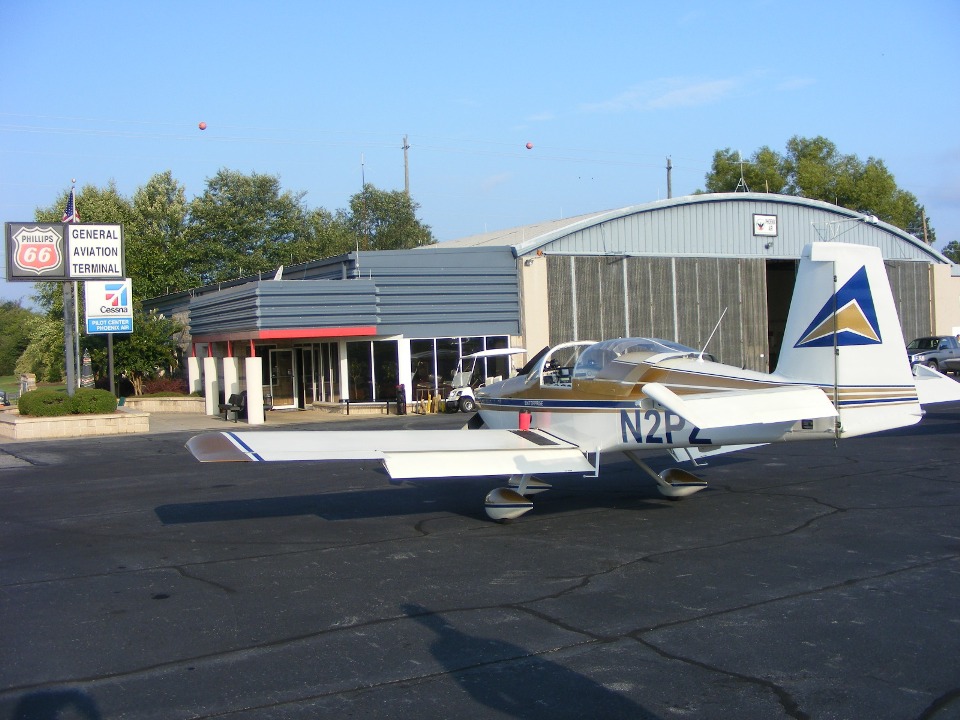 Jere painted this airplane himself.  It was built in his basement at home, about 31 miles by road from the Cartersville Airport.  In case you haven't noticed by now, this plane is named "Tweety Bird III" and the mascot is clearly visible on the wall of the hangar.  This is the third yellow home-built project Jere has completed - all named Tweety Bird.  He has a military aircraft maintenance background and is a licensed A&P mechanic. 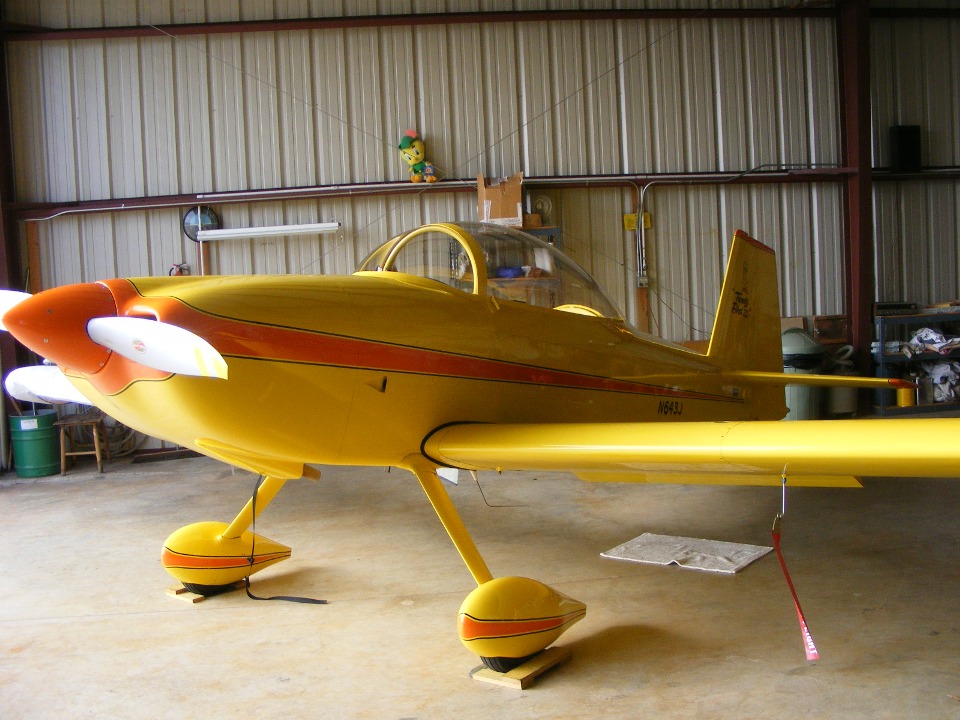 Our primary reason for coming was to see canopy skirt details, but this empennage fairing is one Jere created with aluminum and fiberglass. 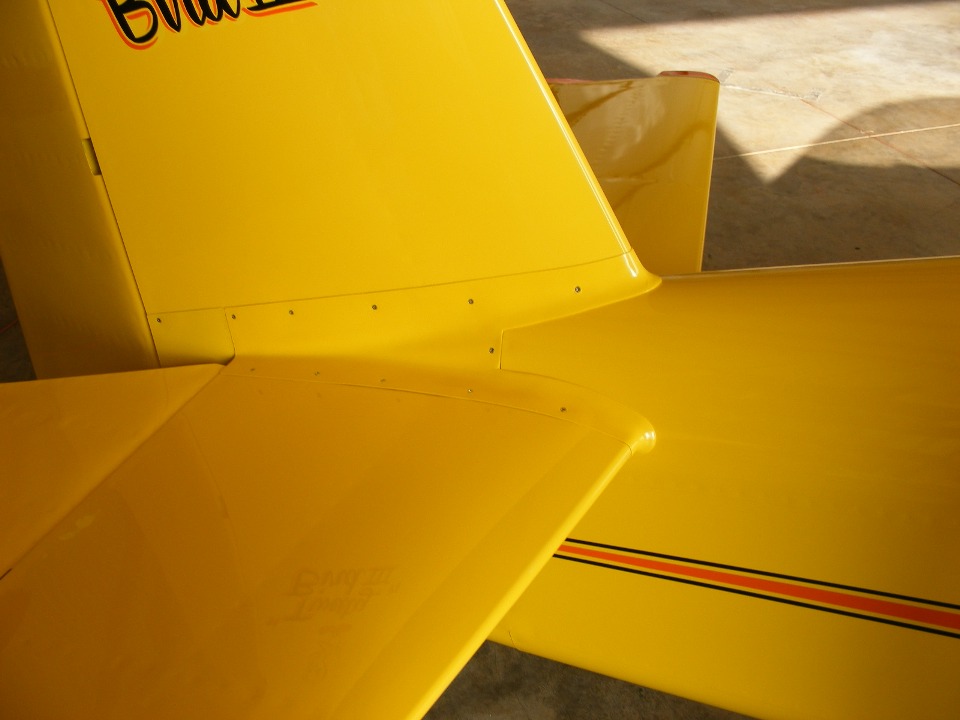 The panel is basic VFR with traditional instruments.  The turn coordinator is electric, so there is no vacuum system aboard.  Notice the lack of any RTV sealant between the roll bar and the windshield.  You can see the spacers that align the windshield with the bubble canopy when it is closed. 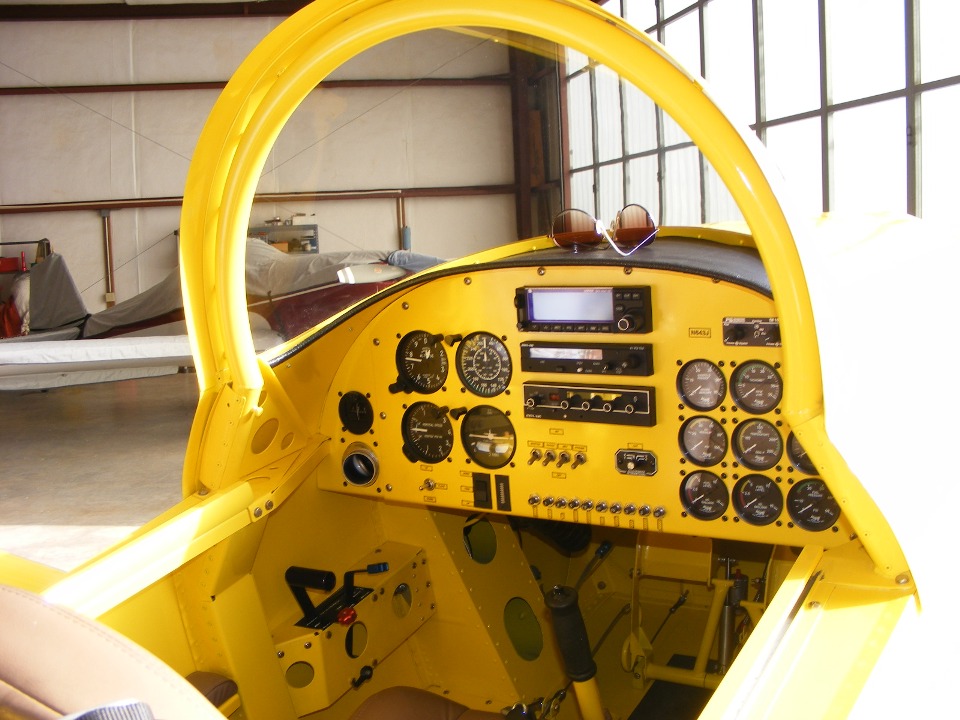 Two items got my attention in the passenger seat area.  The ELT is mounted with its antenna in an accessible, yet out of the way location.  The other important thing is the cover and stick boot in the center floor area.  That is not part of the kit from Van's.  Jere talked about how anything dropped in the back seat would end up in the sub-floor area and was hard to retrieve.  The cover and stick boot put an end to those worries. 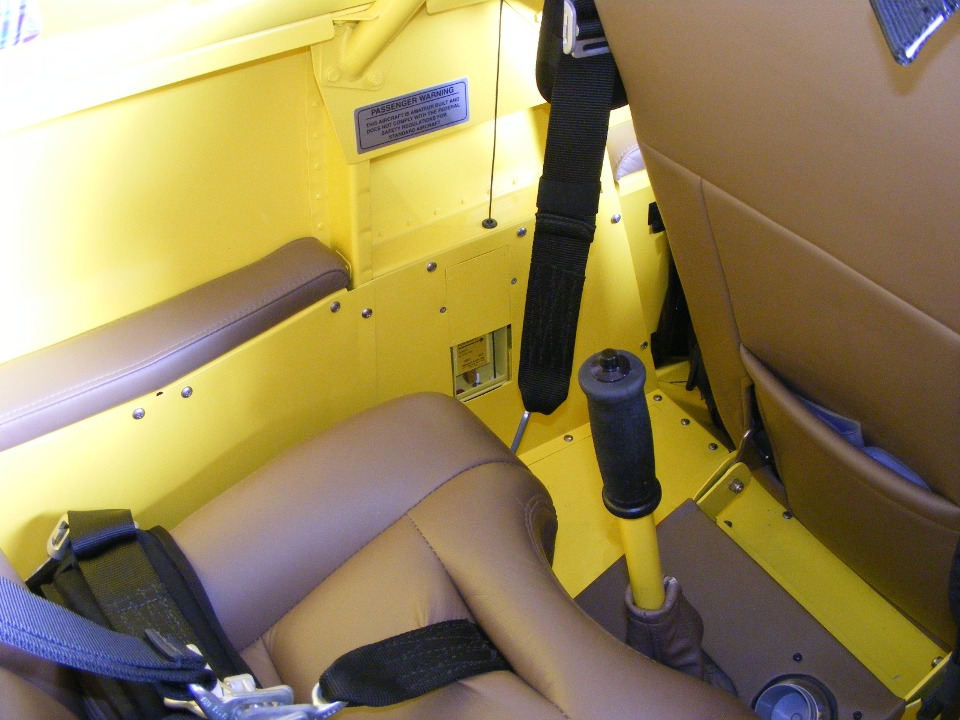 The hangar also has the Cessna tail dragger you see parked next to Jere's RV-8, and an RV-4 is on the other side of the hangar.  Jere also told us of his biggest restoration project, a B-25 Mitchell bomber that is now based in Virginia. 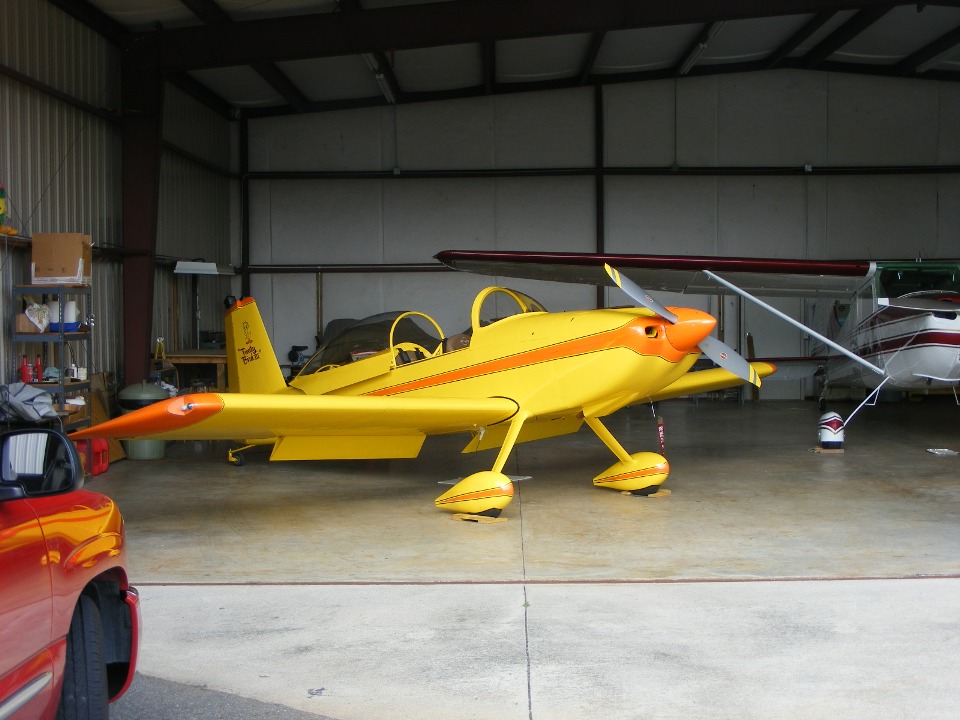 We pulled my RV-9A up the alleyway from the hangars to the taxiway for an engine start there.  Before we could do that, a car pulled up and Jere introduced us to the local designated airworthiness representative (DAR) and a former RV-6 builder/pilot.  He sold it a few years ago and now wishes he had kept it.  He had the usual questions to ask when he saw an airplane that was not based at Cartersville (mine of course).  Wendell took his card and from their discussion, he has probably found the DAR he wants.  We talked about the size of the phase one test area, etc.   The conversation was cut short when a returning Cessna 172 landed and pulled up to enter the ramp we were blocking.  Wendell and I saddled up and said our good-bye's to taxi out for an eastbound departure to Athens, Georgia for our next stop of the day with another RV-8 pilot.