May 20, 2007:  It was around 1:15 PM when I taxied out to the runup area for Fort Pierce runway 9, I noticed my engine running rough and quickly leaned the mixture as my first Florida flight instructor had taught me back in 1991.  The runup proved that the plugs were not fouled and I took off very quickly since the wind was still blowing down the runway around 19 MPH.  Here is the view out the window of the Melbourne Airport when I reached my initial cruise altitude of 8,500 MSL. 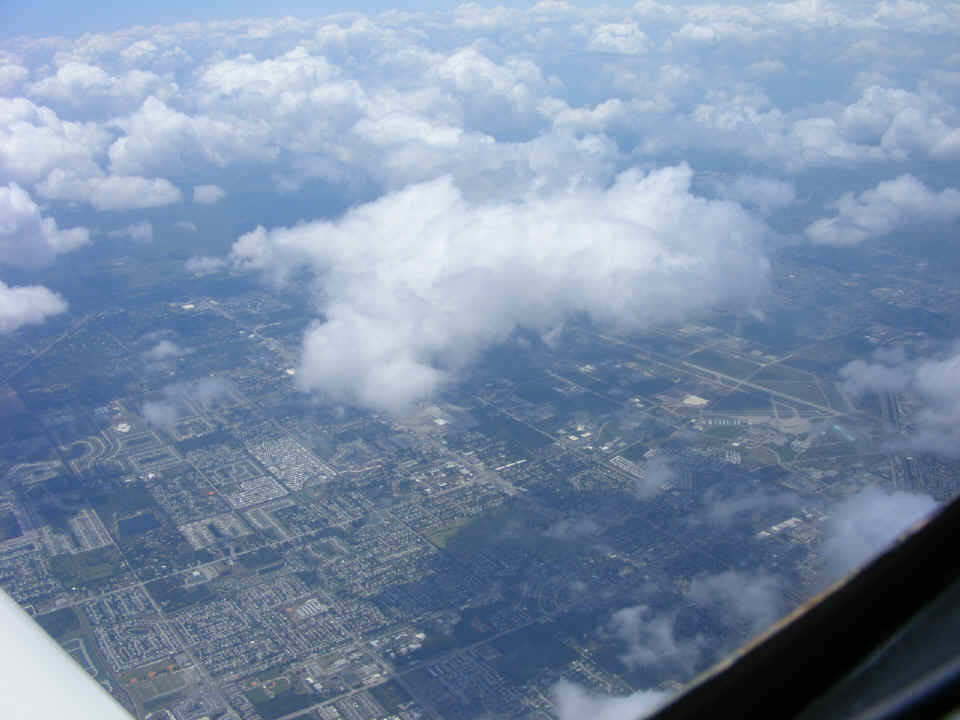 I had a minor electrical problem that caught my attention about 30 minutes into the flight.  I noticed my battery voltage going down to what would be about 11.7 volts.  The first hint came when the autopilot "failed" and no LED lights were visible on it.  I was cruising at 10,500 MSL talking with Orlando Approach when I finally diagnosed the problem as no output from the alternator.  I told approach about it and he asked if I wanted to declare an emergency, probably fearing I might have an in-flight electrical fire.  I let him know that it was not that kind of problem and that I would be turning off all unnecessary electrical equipment, including my transponder.  We agreed that I would descend to get out of "traffic lanes" since I was in the confined space between Kennedy Space Center and the Orlando Class B airspace.  By the time I got handed off to Daytona Approach, the cycling of the electrical equipment had gotten the alternator back in service.  I checked the charging current at over 2.5 amperes as the battery started its recovery to normal operating voltage.  I can see that I need to program the low-voltage alarm on my engine monitor.  The Dynon D-10A has a voltage display in small numbers, but no alarms.

Now that things were back to normal, I settled down and took this photo of the Daytona Speedway and Daytona Beach Airport (KDAB).  I had been flying at 5,500 feet when I was handed off to the Daytona approach controller.  I requested higher and he gave me 7,500 MSL.  I questioned that and he told me they did things "different" here with northbound flying at ODD thousands, southbound at EVEN thousands, etc.  It wasn't long after this that I was alerted to a southbound airplane that passed about a half-mile off my left wing going south.  At that point I was ready to climb to 8,500 MSL no matter what this guy said.  Fortunately, he handed me off to Jacksonville Approach and the first thing I did was request higher and got it. 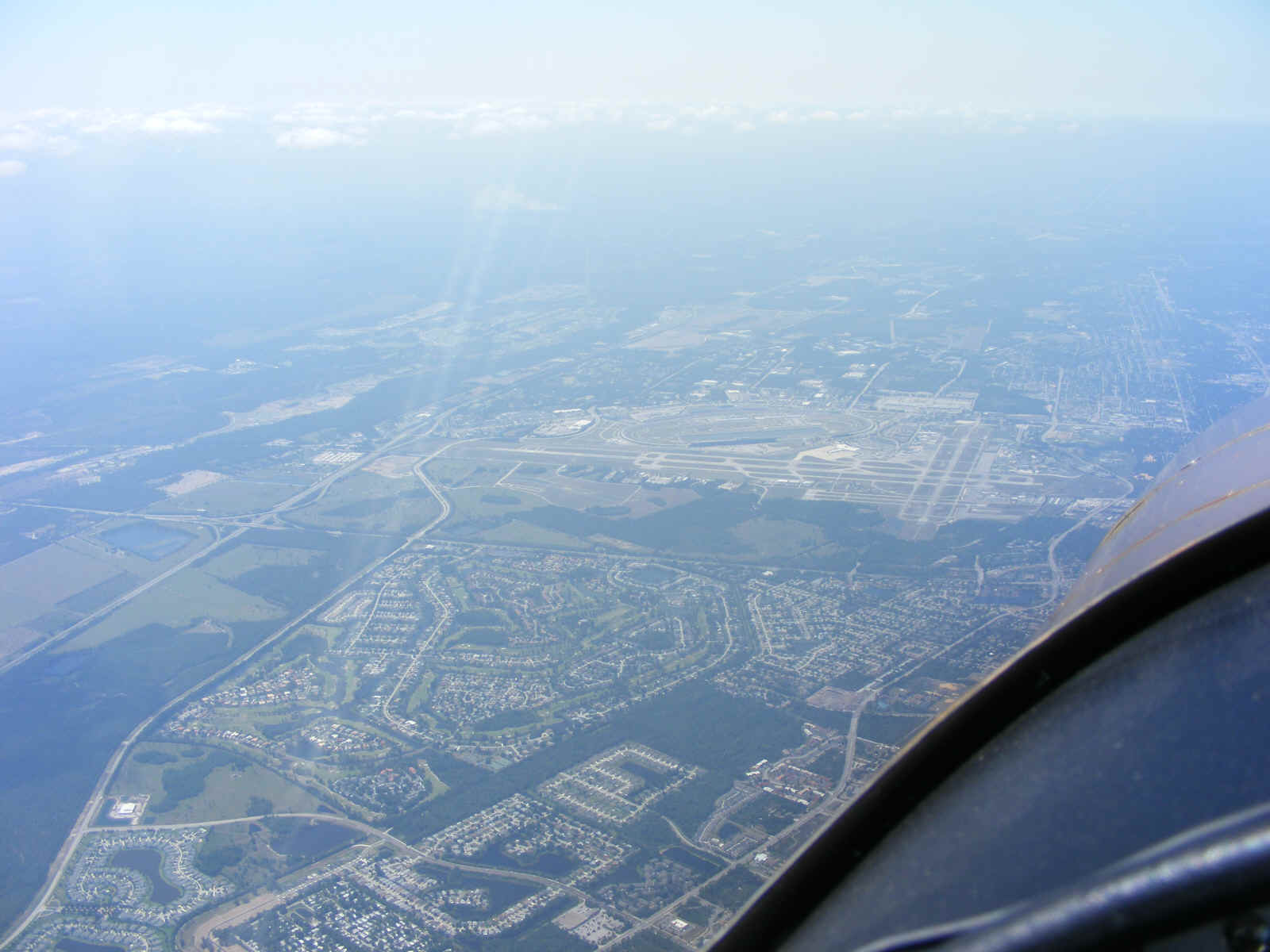 Back at 8,500 MSL, things were looking much better north of the weak frontal area as I approached Jacksonville from the south.  This time I had eliminated Craig VOR from my route and was on a direct heading for Alma, Georgia after passing St. Augustine, Florida. 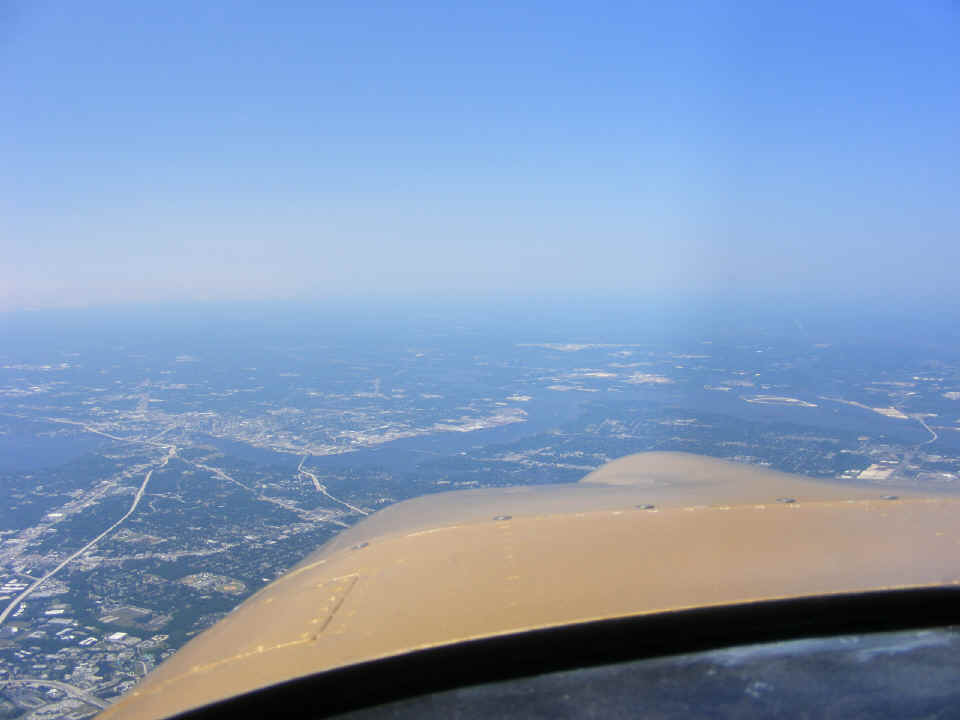 Here is a better view of downtown Jacksonville where US 1, Interstate 95, and US 90 all converge to make their way across the bridges at this part of the Saint John's River.  Interstate 10 begins the westward journey to California just across the largest bridge at the center of the photo.  It runs parallel to US 90 most of the way. 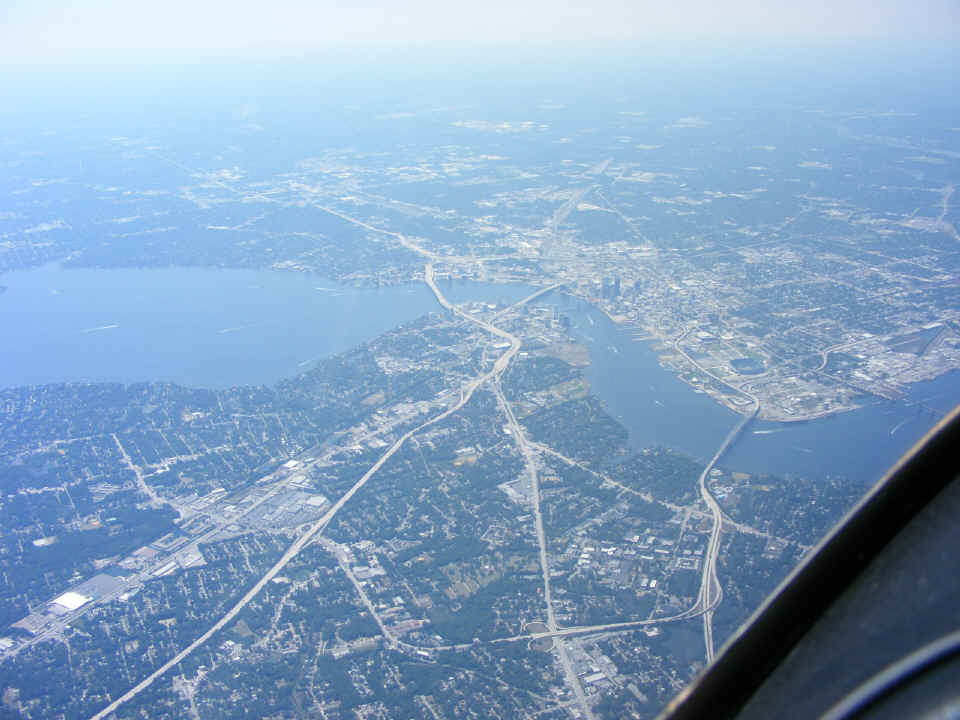 I took this photo as I crossed the Jacksonville Airport.  Since it was directly below me, I could not get a good photo of the airport, but the fires in south Georgia were plainly evident.  The wind patterns had changed significantly since I stopped for fuel at Alma around 9:30 AM this morning.  The time stamp on this photo is 2:56 PM.  I was well into my descent when I got close to Waycross, Georgia.   The town and airport were easily visible at the south edge of the smoke that was blowing across that area.  I got down to 2000 MSL to remain in VFR conditions in the thin smoke.  My last five miles into Alma were at 1200 MSL, pattern altitude.   When I landed and pulled up to the pumps, I noticed that the fuel hose and the gallons indicator were just as I left them earlier in the day.  No one had bought fuel since my 10 AM departure from my southbound trip. 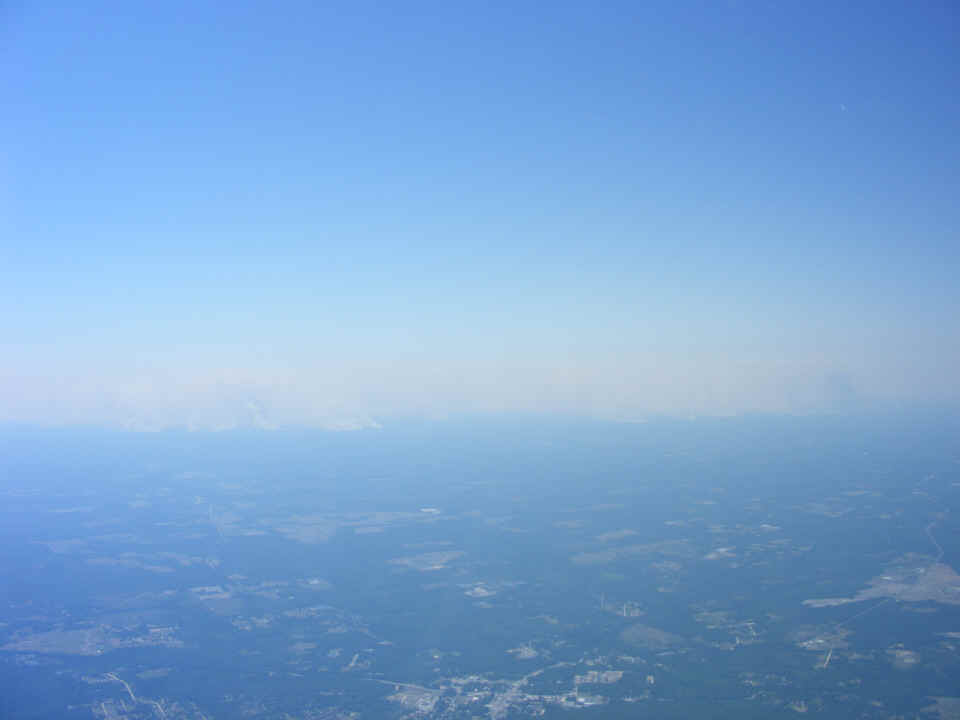 I called Wendell from the ramp at Alma to confirm the weather was still fine at home.  The northbound departure from Alma, Georgia was less of a problem as the smoke north of there was less dense.  I never lost sight of the ground as I climbed to 10,500 MSL for the ride home.  I finally got into smooth air as I climbed through 8000 feet.  The electrical system had no further events and the autopilot was doing a fair job of keeping me on course.  I took this shot for the forum at Van's Air Force to post as an in-flight self portrait.  I really need to wash that Van's Aircraft hat.  I have a second Van's hat that is pristine.  I wear that "new" one at trade shows from time to time. 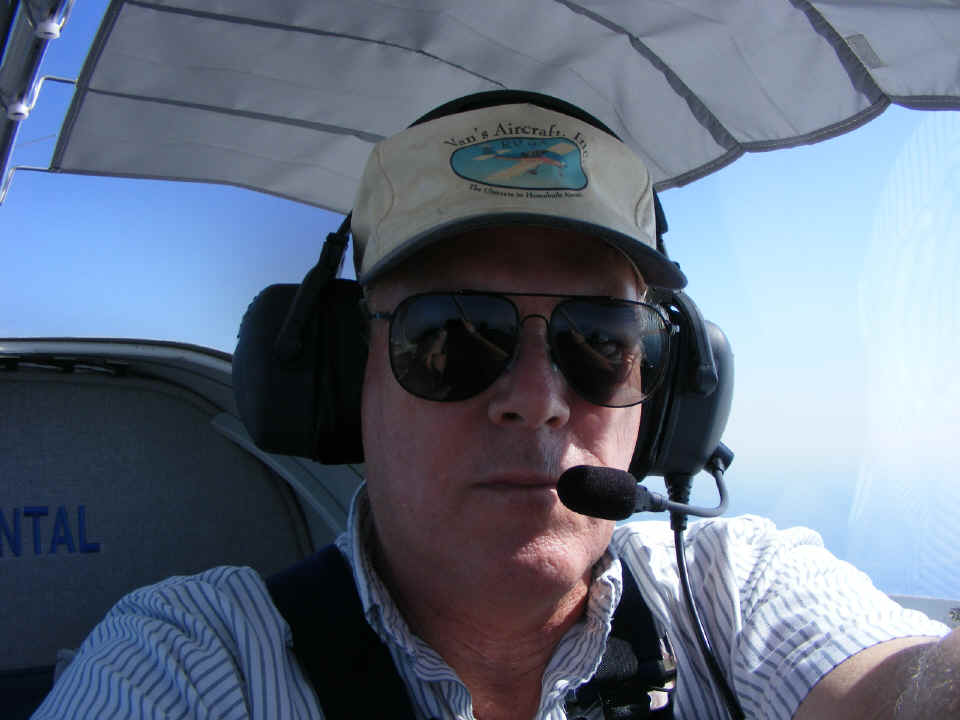 Lake Sinclair is directly under my position above Milledgeville, Georgia with Lake Oconee seen in the distance looking NE from 10,500 MSL.  This is much better traveling this week.  Last week there was a wall of towering cumulus clouds here and thunderstorms ahead.  Needless to say, I did not have time to take any photos last week since I was busy flying the airplane and working with air traffic controllers. 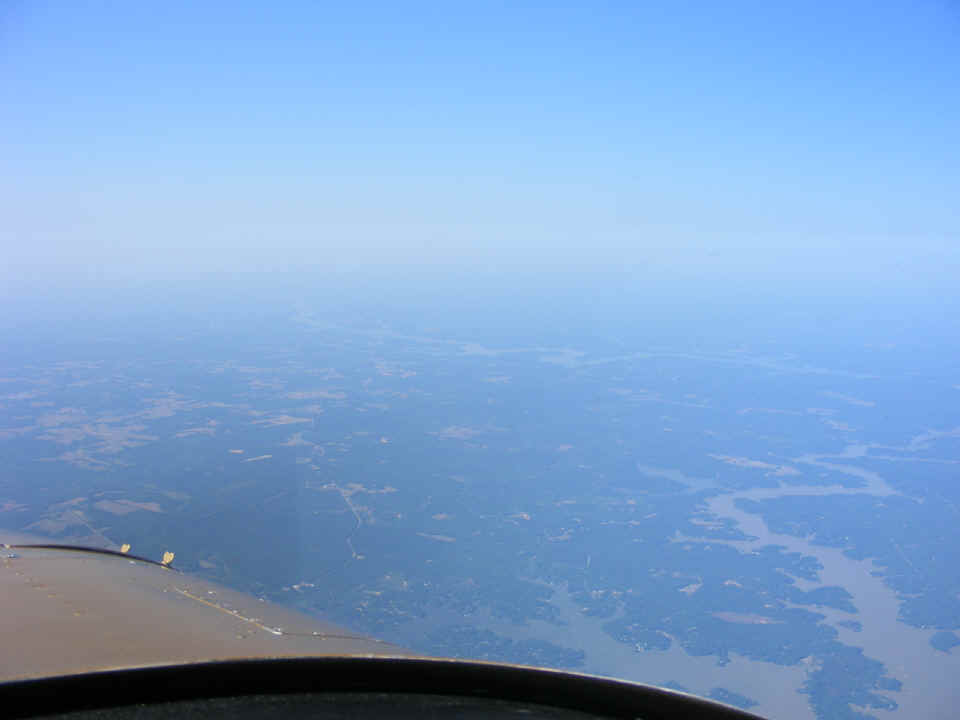 Here is a view of Briscoe Field at Lawrenceville, Georgia (KLZU).  I passed by just outside the Atlanta Class B airspace at 10,500 MSL on the NE side of the Atlanta metro area.  That is Georgia highway 316 winding past the airport.  I did not see a single airliner (up close) this week anywhere along my route today. 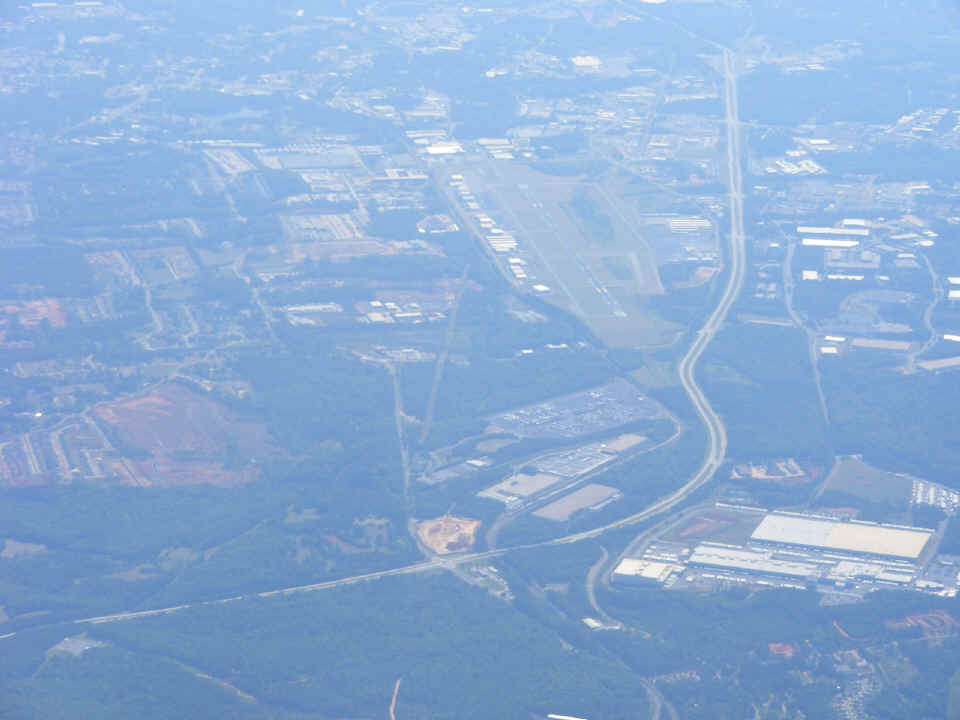 The last in-flight photo of the day shows the Dalton, Georgia airport in the distance during my descent to Folks Field.  I was flying on a heading of 312 degrees and talking to Chattanooga Approach at this point in the flight.  I had been watching the winds aloft all day on the Dynon D-10A.  Except during my takeoff from Fort Pierce, the winds were directly at right angles to my flight path.  I had five takeoffs and landings with one diversion from Baxley to Alma in the morning due to the dense smoke.  It was a good day for flying and having lunch with friends, new and old alike! 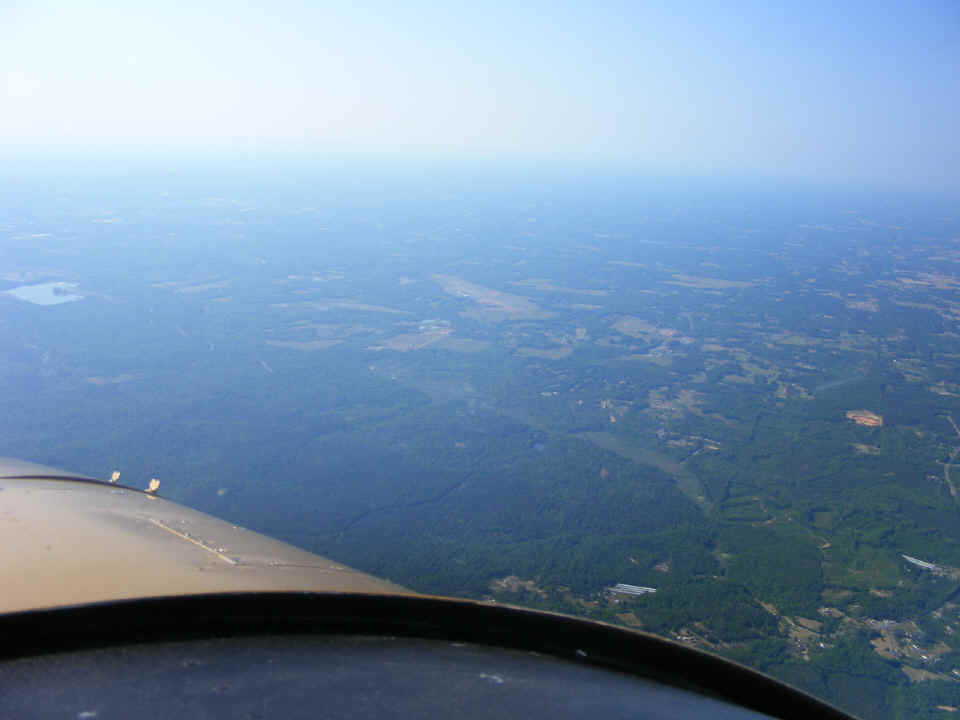 It was 5:48 PM as I landed and taxied up to the hangar.  Wendell did not hear me fly over to check the wind sock which was fairly limp.  From my vantage point a thousand feet up, the Dynon was still reporting a wind from the south at 14 MPH.   The Chattanooga ATIS reported 4 MPH from the south with runway 20 active.  I landed from the south to shorten the time to get to the hangar.  I had hoped to see Wendell before he departed for the evening.  He heard me rev my engine as I turned onto the concrete ramp then shut down to open the hangar door.  He came out to open the door and move his Aeronca Champ out of the way for my airplane to go in the NE corner of the hangar.  I had already stood up but did not get out of the airplane.  I sat back down, closed the canopy, and cranked up to taxi into position in front of the hangar in a north-south position without blowing any grass inside.  The hangar door opens on the west side of the building.

I had turned on my cell phone when I first stopped the engine on the ramp after my landing.  It rang just as I stood up for the second time to finally get out of the airplane.  It was Monte checking to be sure I made it home today without incident.   I put the airplane away and then put the Champ back inside the hangar as I continued talking with him.  I proceeded to give him the verbal story you see posted in these pages.  Since he and I are both in the electronics business, he agreed that I have either a bad switch in the alternator field coil circuit or a loose butt splice in the wire behind the alternator itself.  My annual inspection is due in the next two weeks, so the problem will be found as I tear things apart at the close of my second year of flying "Enterprise" around the country.  The Hobbs meter now stands at 232.0 hours.  Today's five flight segments totalled 1,271 miles, and added 8.6 hours to my log book and the Hobbs meter.  Every flight provides a chance to learn a new skill.  The lesson today was all about dealing with the smoke from forest fires. 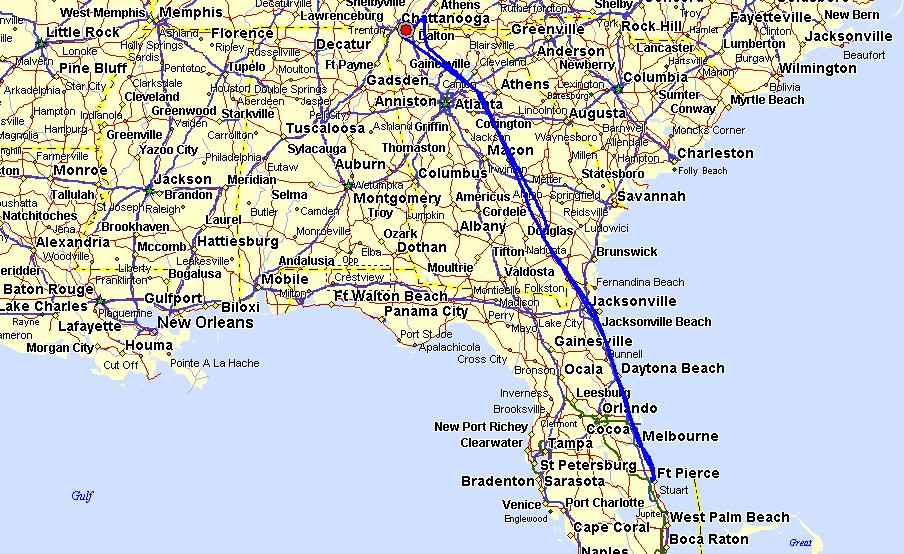