May 20, 2007:  The mission that began last week was completed this week.  The weather was fine, but the smoke from those fires in South Georgia was the biggest factor during the flight.  This first photo is taken as the engine is warming up before the runup and takeoff from my home field.  The grass has really turned a nice shade of green after the limited rain showers last week.   The tracks from the hangar had displaced the dew on the grass coming to the north end of the strip.  The takeoff time was at 7 AM Eastern Time.  My alarm clock went off at 5 AM. 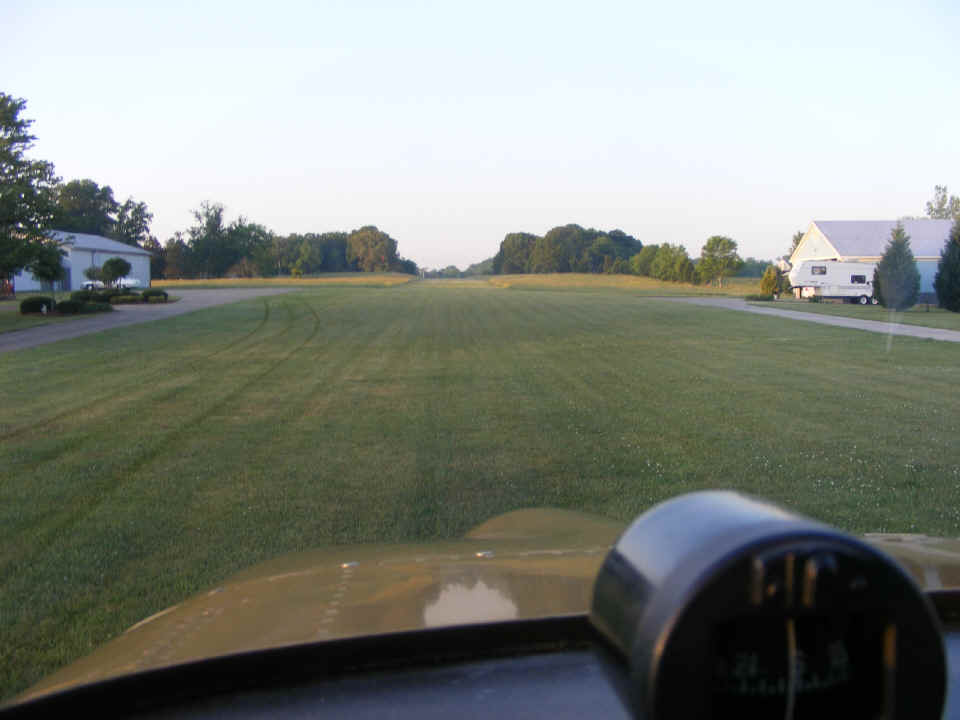 The first stop of the day was at the Cleveland, Tennessee airport, Hardwick Field (KHDI) to pick up my passenger from last Saturday's round trip to Florida.   This airport is not far from the Collegedale Airport, which I called as I flew past, but no one answered from the FBO.  I have never been to Hardwick before this morning's arrival at 7:25 AM.  The ground time here was short, with the usual baggage loading and showing the airplane to the folks who brought my passenger to the airport. 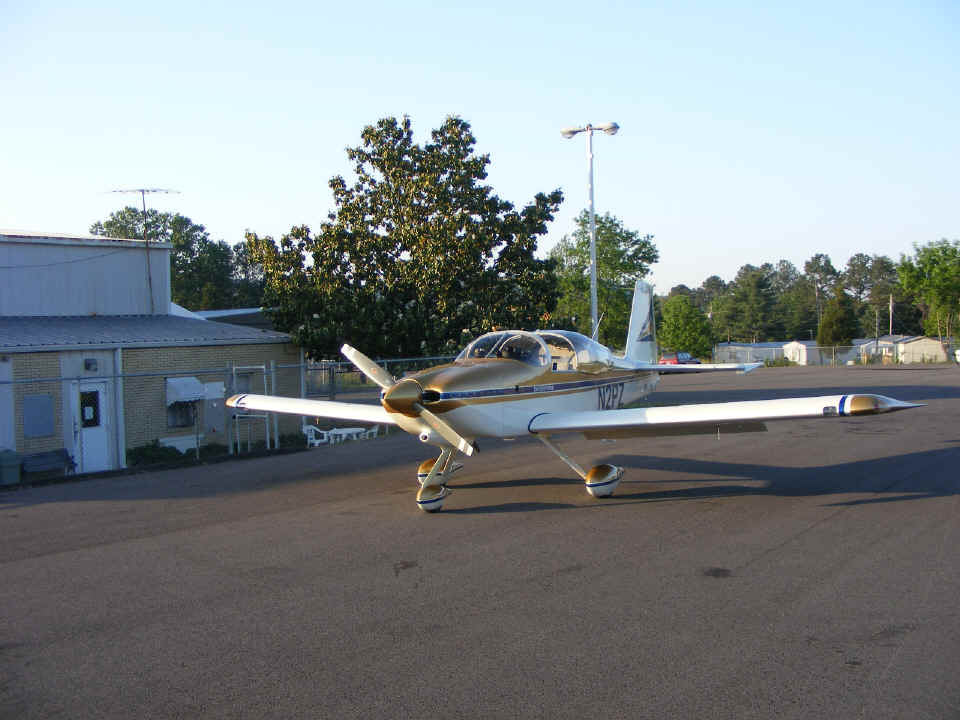 The weather this morning was severe clear across the north Georgia and SE Tennessee area.  The real problems began about 90 minutes later when I looked down toward our intended fuel stop at Baxley, Georgia.  The area was blanketed in smoke and possible ground fog.  At that time of the morning, it was lying close to the ground below about 1000 feet AGL.  It was so thick I could not see the Baxley Airport, but Alma was visible.  Two trips south in two weeks and both times found me diverting to Alma, Georgia for my fuel stops.  The time added to the Hobbs on this flight segment was 2.0 hours.

The stop at Alma was typical except for the haze created by the smoke.  We got back in the air around 10 AM, the same time as last week.  The smoke was not blowing toward Jacksonville this week as seen in this photo looking down at Mayport Naval Air Station and the Saint John's River meeting the Atlantic Ocean. 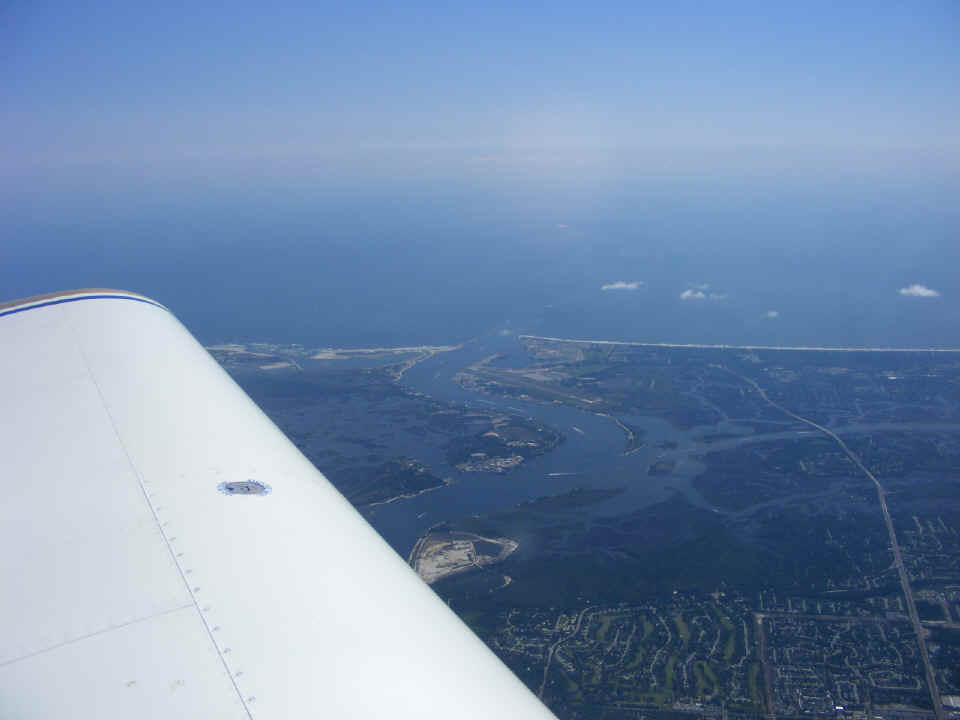 This view is looking forward as we crossed directly over Cecil Field (not seen) and just before our turn to follow Victor 3 and Victor 51 airways.  I was explaining to my passenger how VOR systems worked and showing him the VOR compass rose on the Jacksonville sectional chart. 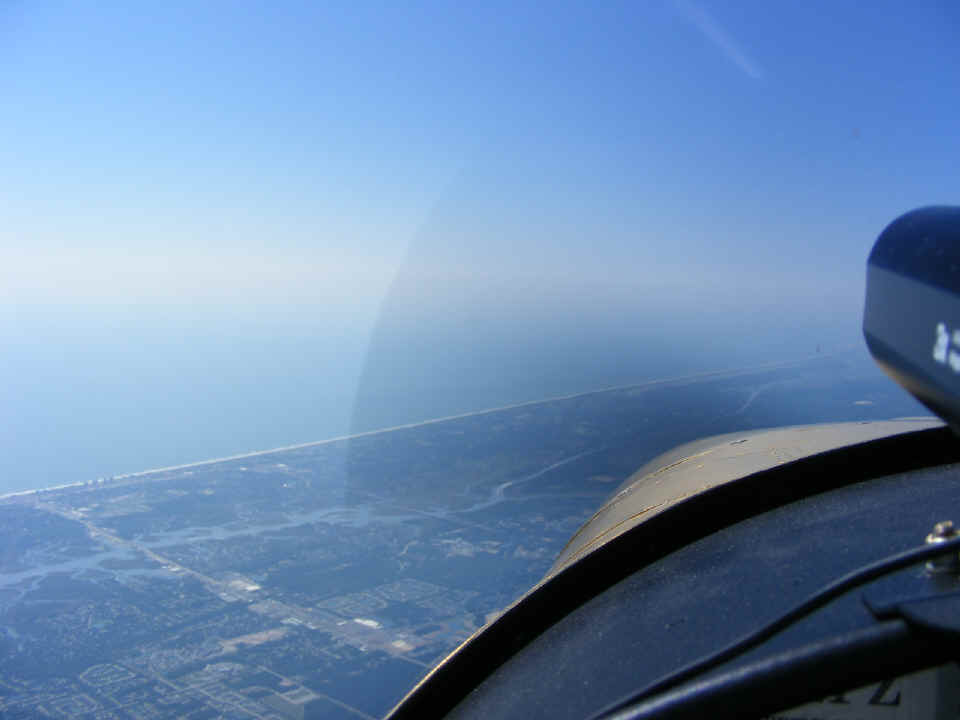 Here is the view looking out the right side, showing the Saint John's River south of Jacksonville.  That bridge across the river is Interstate 295.  I-95 and US 1 run roughly parallel and are visible just over the dashboard ahead of the wing on this side of the river. 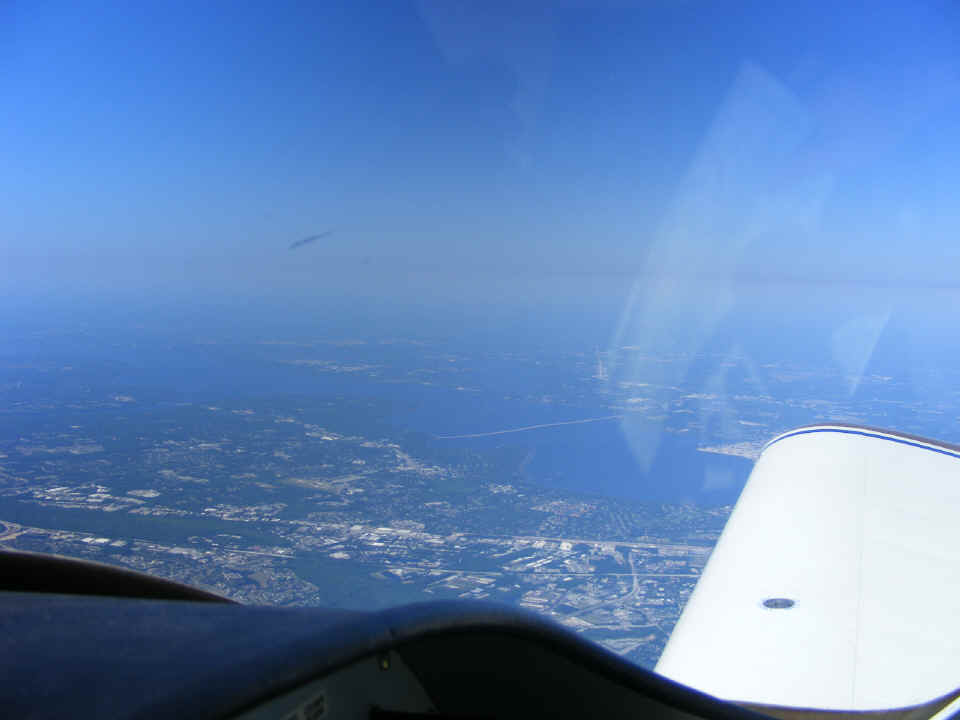 By the time we reached the Daytona Beach area, Terry was getting the hang of navigating by VOR and pilotage, looking out the window and comparing airport diagrams and geography with the sectional chart.  That is the airport at New Smyrna Beach below.   I showed him the chart depiction of the runways at the airport and the nearby inlet from the Atlantic Ocean to convince him it was a simple task.  Remember that his first flight in a light airplane was last week.  That was the first time he had a chance to learn about general aviation flying, navigation, weather, and radio communications in flight. 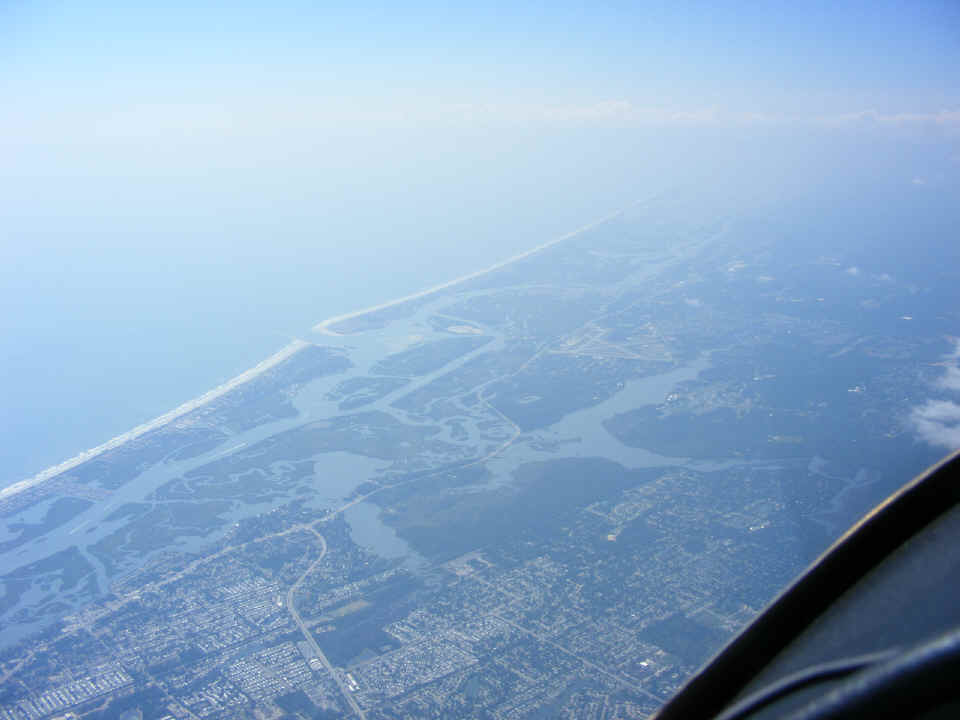 I took this shot immediately after the one posted above while New Smyrna Beach airport was still visible below.  That line of clouds ahead is what really got my interest.  That is the remains of the weather front that played havoc with thunderstorms around Atlanta last Saturday.  The front was very weak at this point.   It was in the area around Titusville and Melbourne, Florida along the Atlantic coast.  If I had not seen it depicted on the weather charts this morning, I would not have given it much thought as we passed over it at our cruising altitude of 8,500 feet MSL. 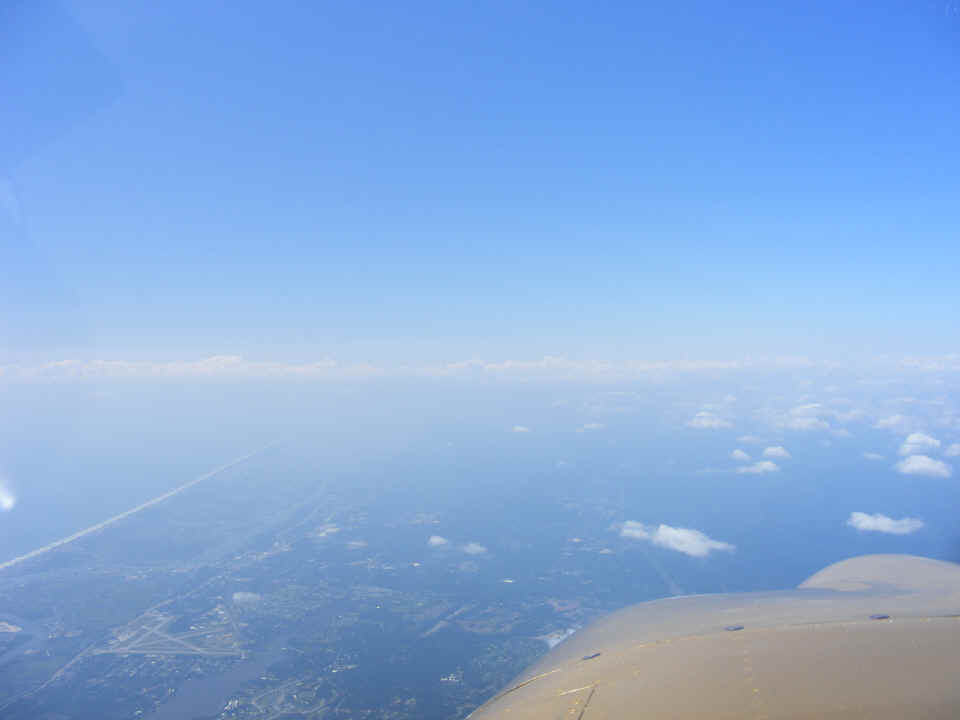 Here is the photo I forgot to take last week.  The Tiki Restaurant is also an FBO office near the center of the ramp at Fort Pierce (KFPR).  The landing was on runway 9 with winds of 19 MPH and gusts to 23.  I confirmed that on final approach as my airspeed was showing the usual 80 MPH with full flaps, while the GPS showed 61 MPH over the ground.  I commented about it to the tower just before touching down.  I managed to make the first turnoff from the runway.  When I called the ground controller, he commented on my Piper Arrow.  I corrected that the paint scheme was from the 1966 Piper Comanche.  I told him it was intended to provide the "Piper connection" when folks see it.  I asked him if he would like to check out this web site about building and flying my RV-9A.  He said yes of course!  My next question was if he was coming to lunch at the Tiki and got a negative response.   Would he like to copy down the web address?  Yes was the reply, so I gave it to him using the ICAO alphabet.  I don't think he got a chance to see this side of the airplane, unless of course, he was still on duty when I departed one hour later. 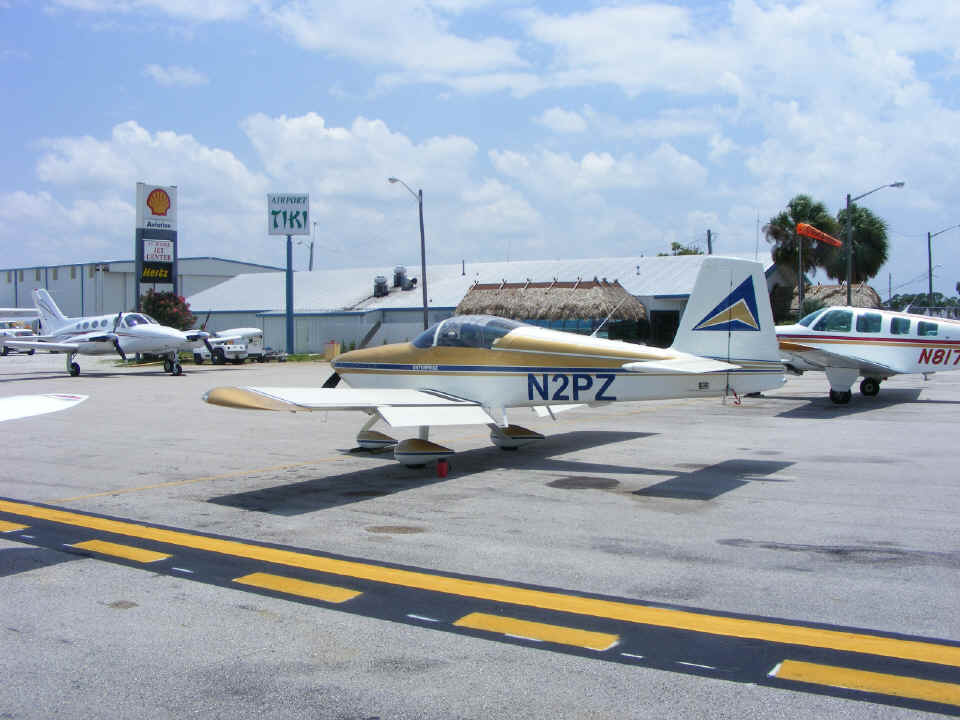 It was 12:05 PM when I parked at the ramp, completing another 2 hour flight segment on the Hobbs meter.  By the way, the restaurant had few open tables today as they were really busy with the Sunday lunch crowd.  My friend Monte came to meet us for lunch and give Terry a ride home from the airport.  I pulled Terry's bags from the plane and got into a conversation with an airline pilot about building my RV-9A.   I gave him one of my web site "business cards" and got things buttoned up before going inside.  With the wind blowing as it was, I made sure the parking brakes were set and the rudder gust locks were also installed.  I took this photo just before my departure pre-flight inspection.  That wing tip at the left of the photo is from a Cirrus SR-22.  A Beech Bonanza in parked on the other side of my airplane.