May 12, 2007:  I called my passenger in Florida just before taking off from Alma to tell him I should arrive at Fort Pierce around 12 noon.  He was at Monte's seafood shop when I called his cell phone.  I took this picture looking East from the Waycross, Georgia area a few minutes after my departure from Alma and climbing to my cruising altitude of 9,500 MSL for the remainder of the trip to Fort Pierce, Florida (KFPR).  Those scattered "cotton ball" clouds were a hint of things to come as my flight path would take me toward the Atlantic coastal route I would fly today. 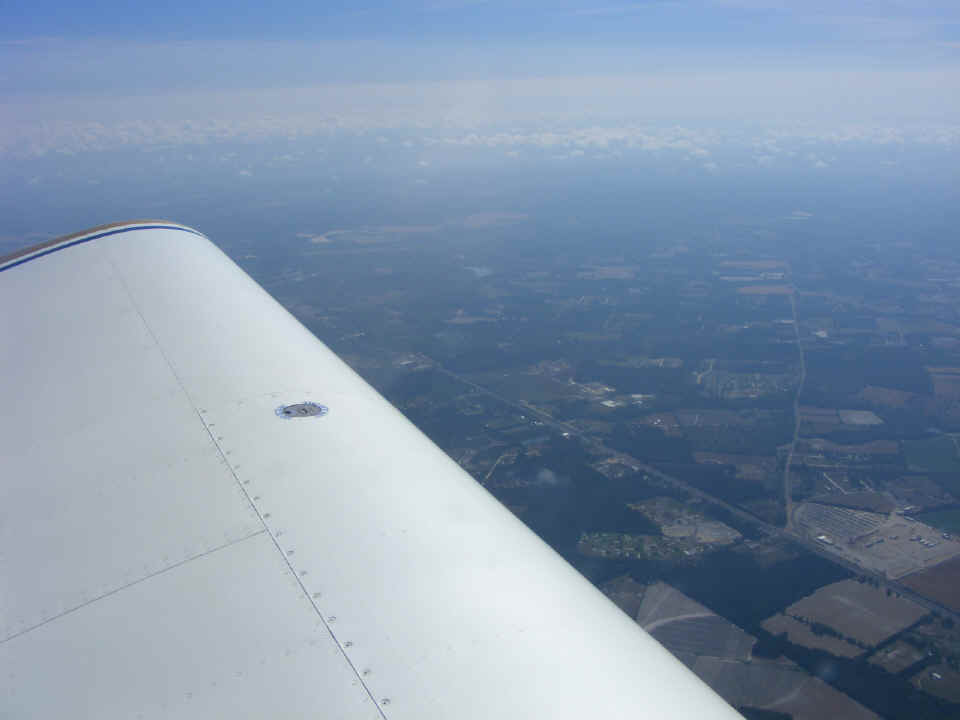 The low clouds became more numerous as I approached the Jacksonville area at 10:40 AM.  They stop at the shoreline with the Atlantic Ocean.  The new linear polarizing filter on the camera is minimizing the reflections off the inside of the canopy.  Only ONE reflection is barely visible near the top of the photo below. 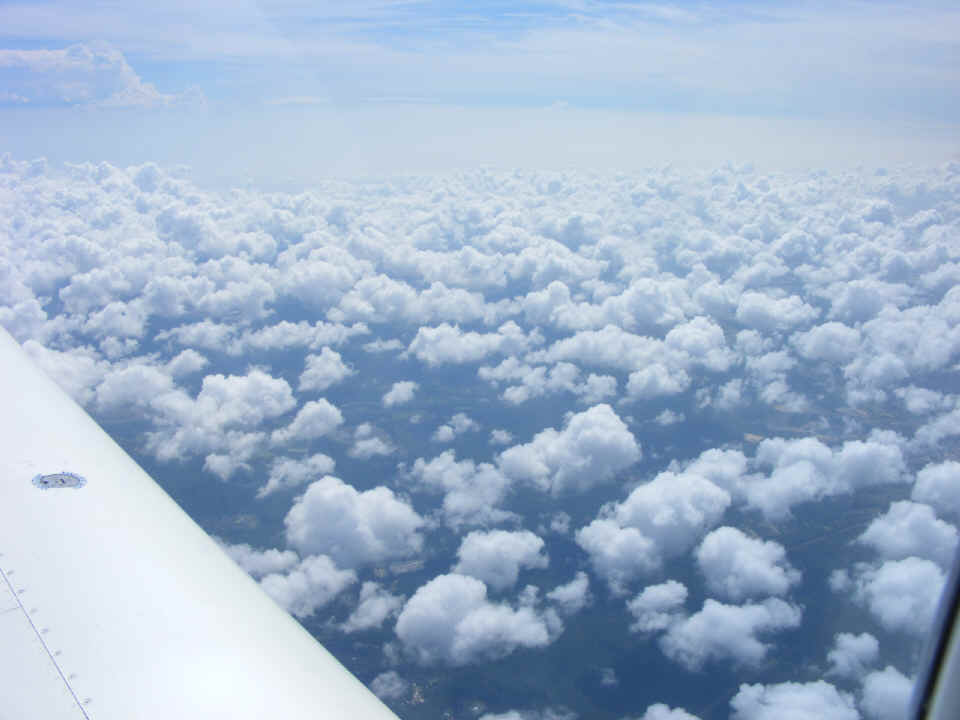 I took this photo immediately after the one above to give a look ahead.   The clouds building from below are typical of the coastal conditions in Florida.   The heating of the day will bring them way up into the atmosphere in the late afternoon. 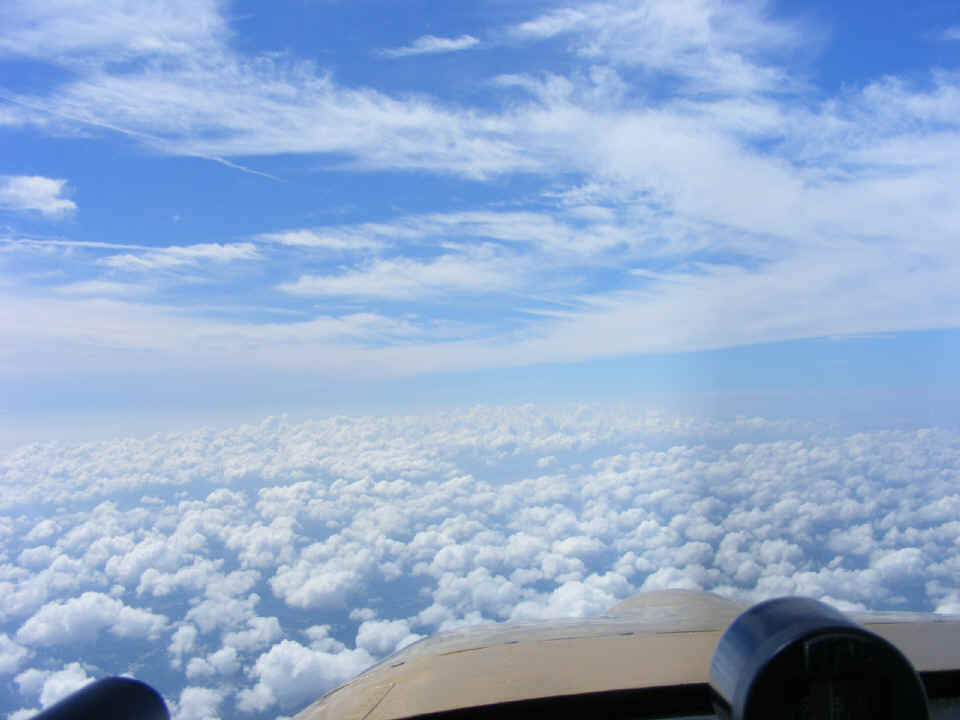 I looked out to the west in this shot taken at 10:41 AM.  That haze on the horizon is the smoke coming from the fires in north Florida and Ware County, Georgia south of Waycross.  I forgot to adjust the filter on the camera to reduce the reflection.   I was thinking about what I was seeing outside and not my photography skills.   There is a little "knob/post" screwed into the polarizing filter.   Every time I put the camera down, it moves the polarization of the filter.  It needs to be removed. This is the coastal area south of Saint Augustine, Florida.  I snapped this image at 11:01 AM.  Notice how much low-hanging fog is over the ocean near the shoreline this late in the morning. The Ormond Beach airport (KOMN) is clearly visible just south of the intersection of US 1 and Interstate 95.  I passed overhead at 11:11 AM. 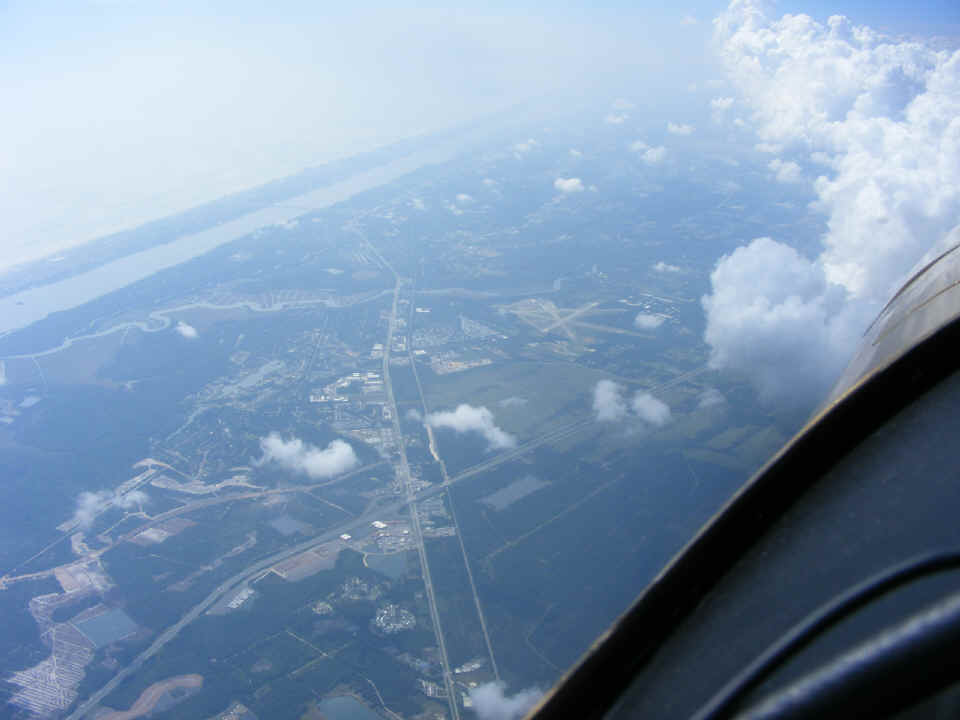 This was the view ahead at 11:32 AM just before I began my descent for Fort Pierce.  What got my attention in this photo was the layer of smoke that was in front of the highest cumulus cloud in this photo.  I looked out to the west and noticed it was the same trail of smoke being blown down from the fires along the Georgia-Florida state line. 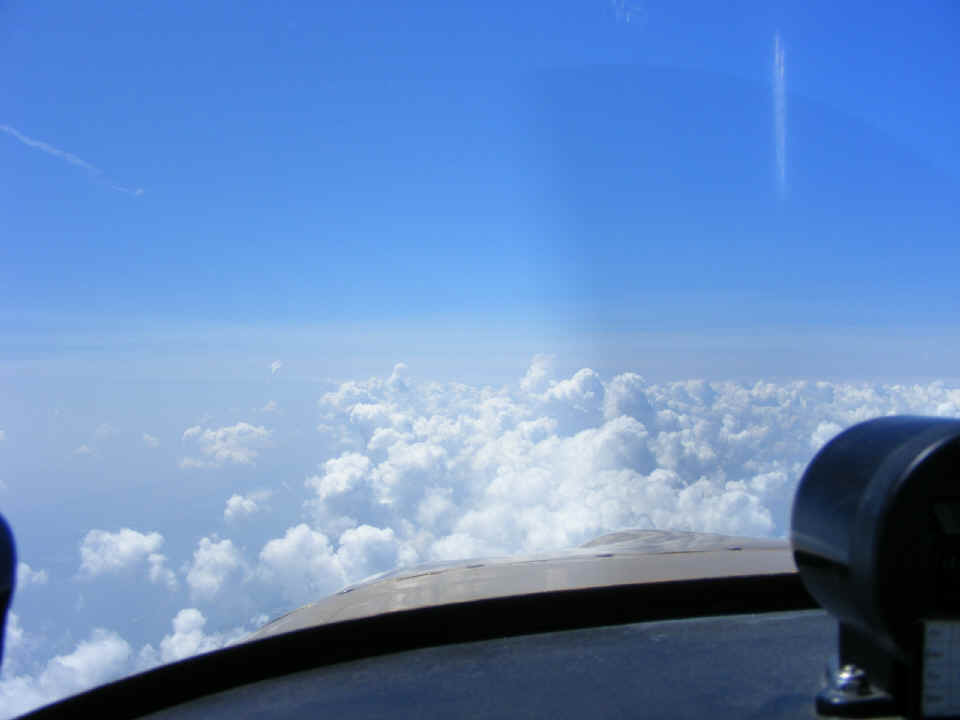 Things started to get busy for me as I began the descent.  I moved to a position just off the beach to be clear of the clouds and headed down to a landing at Fort Pierce right on time at 12 noon.  I met Monte's friend who would be riding back to the Chattanooga area with me this afternoon.  Monte's wife had brought him up from Stuart to the Fort Pierce airport where we could have lunch at the Tiki Restaurant located on the ramp.  I had pulled up next to a Bonanza in a row ahead of a big Gulfstream Jet.  I was concerned about getting lunch and heading back north before the weather could start building up too much in Georgia.

After ordering lunch, I noticed a couple of Lear Jet 35 pilots outside taking a look at my RV-9A.  I took a minute to step outside and talk with them.  Their Lear was being towed over next to my airplane to make way for another big Gulfstream that would be arriving shortly.  The guys were from Rogers, Arkansas.  They would be having lunch inside after their airplane was connected to a generator and the air-conditioning turned on for their client arriving after lunch.  They had some questions about my Dynon D-10A display unit.  When I explained all the features in the Dynon and my Garmin GPS 296, they were jealous.  They indicated that the Lear only had traditional "steam gauges" in the instrument panel.  The new feature of the Dynon HSI page takes information from the GPS and its direct air speed and heading measurements to calculate winds aloft speed and direction.  I used that feature numerous times today.

After lunch, it was time to check the weather online, and things still did not indicate any real problems on the ride home.  Here is a GPS ground track of my arrival and departure from the airport.  The wind changed during the lunch hour.   I landed on runway 27 coming in from the Ocean, and departed on runway 9 toward the ocean.  Interstate 95 (blue) and Florida's Turnpike (green) are not far from the St. Lucie County airport that serves Fort Pierce.  US highway 1 is the double red highway depicted East of the airport on the mainland. 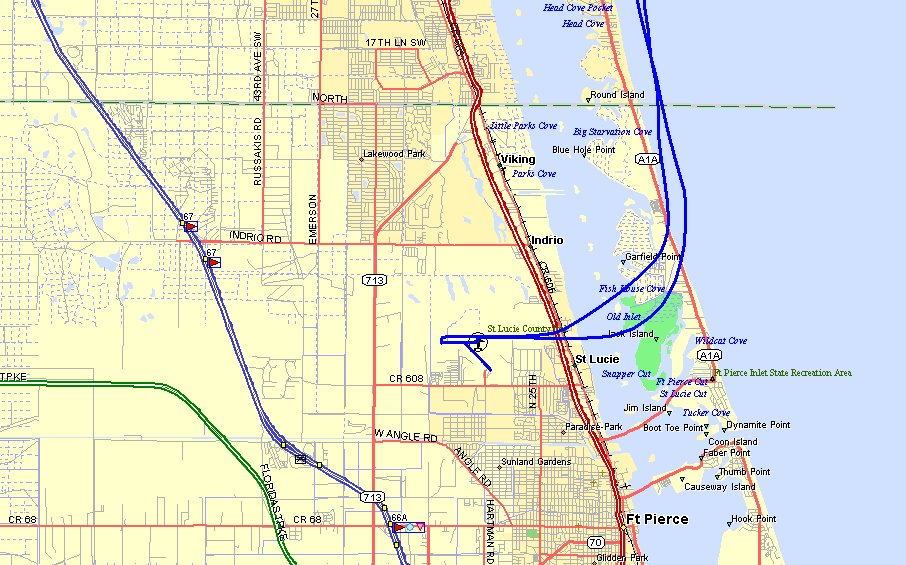 The 2.4-hour flight north from Fort Pierce back to Alma, Georgia was the first general aviation flight for my passenger.  Terry is a veteran of the US Navy and we had good conversation as we headed north reversing my route from the morning flight.   I explained engine operation, flight dynamics of speed, lift, angle-of-attack, VFR rules, etc.  We climbed up to 12,500 MSL along the shoreline heading north toward the Melbourne area.  As before, there were no clouds over the ocean.  We were handed off to Orlando Approach to keep us out of the way of arriving airliners that would cross our flight path near the Daytona Beach area.  A Boeing 737 and an MD-80 would pass overhead at 13,000 MSL several miles in front of us during this part of the flight.   A King Air climbed up with a load of parachute jumpers when we were near Titusville. 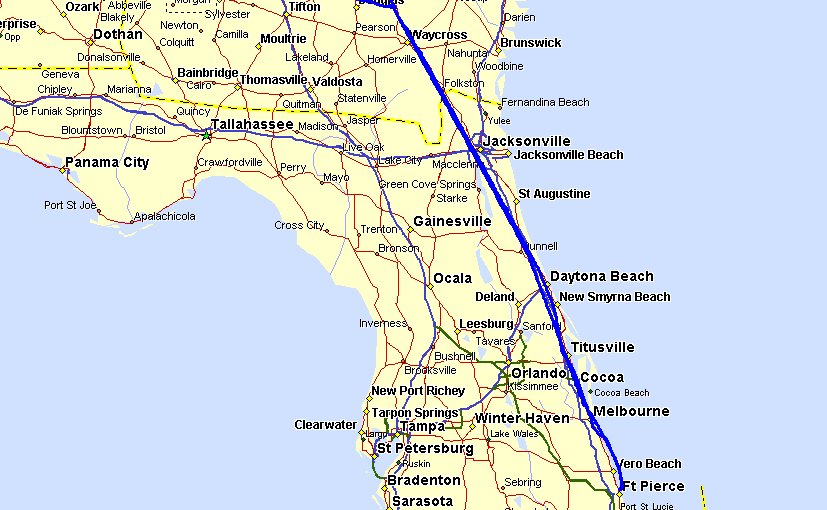