July 25, 2006:  Looking to the north in the Home-Built Camping area, you can see the number of aircraft that arrived as of Tuesday morning.  This is row 310 and it is full to the north end of the lot.  At the right edge of the photo, the planes at the north end of row 311 are just visible. 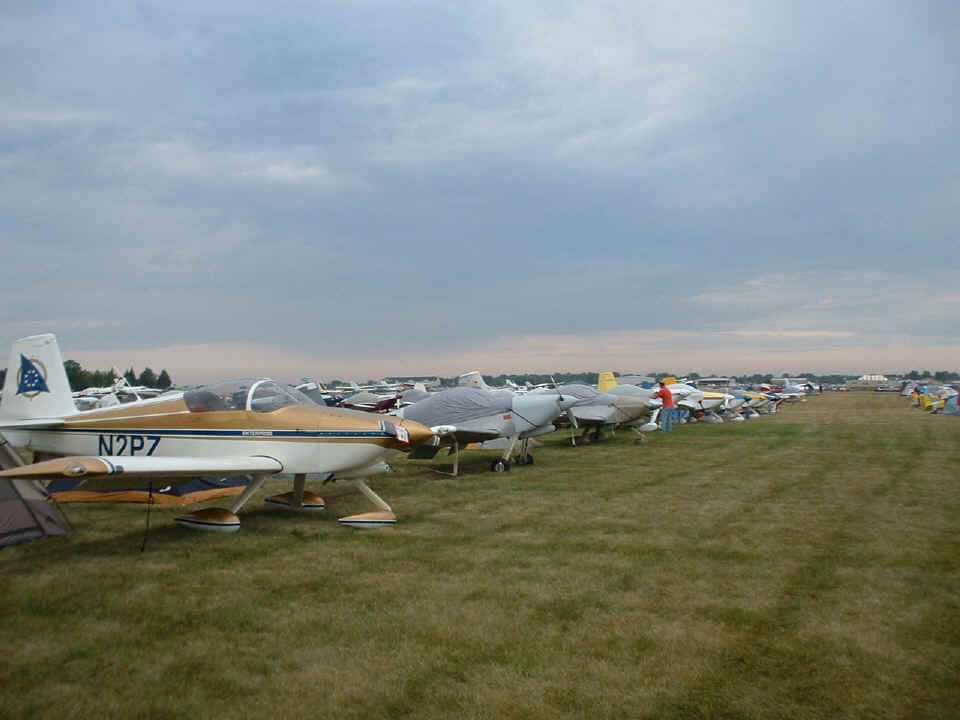 Panning the camera a bit further to the right reveals the yellow tail of the RV-9A that was parked directly in front of my airplane.  That airplane is from Yuma, Arizona and has a small "lipstick" video camera mounted in the vertical stabilizer cap at the top of the tail.  The builder/pilot Rick Smith discovered my dash-mounted video camera and wanted to see what I was using to do my video recording.   I gave him the full tour of the camera setup, and how it is connected and powered.   I gave him the model number of my JVC digital video recorder to allow him to find this year's similar camera from JVC since my model is now obsolete. 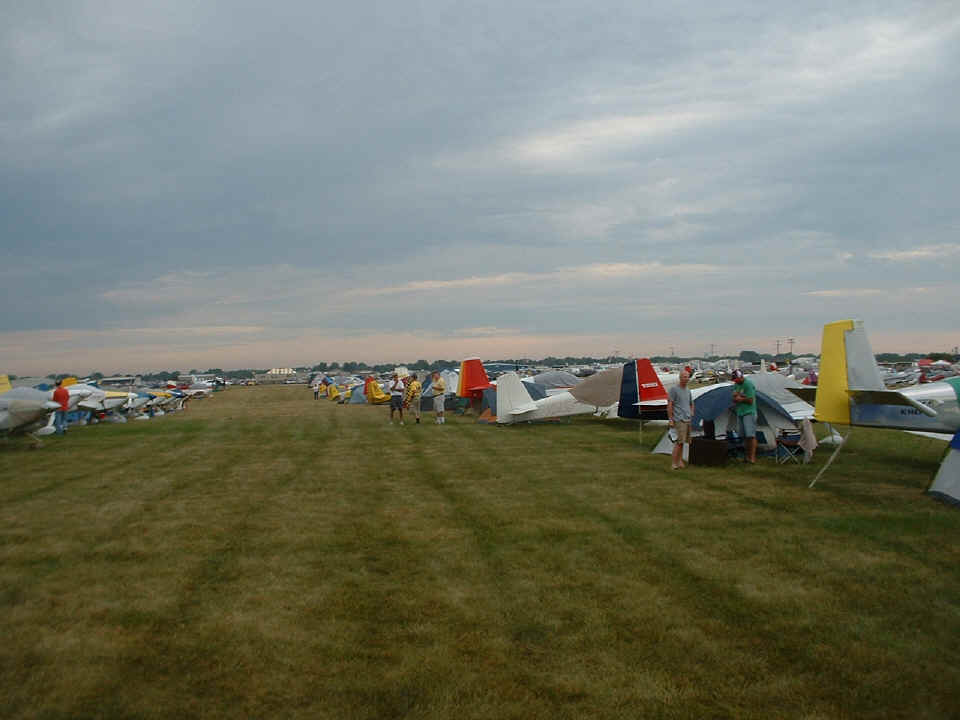 The red tail at the center of the of the photo is from the RV-7A built and flown by Jim Harchanko from Huntsville, Alabama.  He keeps it hangared at the Moontown Airport (3M5), the same airport where my friend David Edgemon keeps his RV-9A.  David did not arrive until Tuesday, the day after I took this photo.  He is planning to stay until the end of the week.

There were already "camper" airplanes parked in row 312, two rows in front of my location.  Beyond that, there were several rows of airplanes that were not campers, but staying in rooms off the field at hotels, the YMCA, the local college dorms, etc.  This photo also shows a sample of the distant rain showers that will visit the area later in the day. 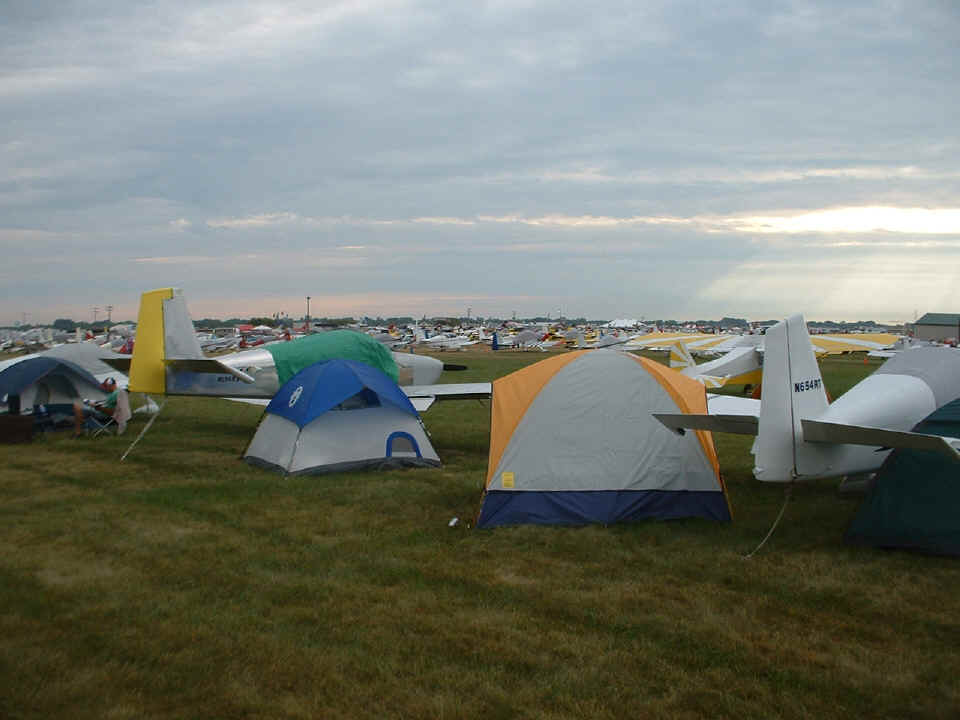 This award-winning RV-8 was parked in a highly-visible location along the road in front of the home-built camping area.  The shower house near my airplane is visible at the right edge of the photo below.  And yes, this kind of photo is what inspired several folks who came by my camp site and mentioned the RED CUP.   I put the cup down when I started to take the photo of the right wing art not thinking about it being in this wide shot. 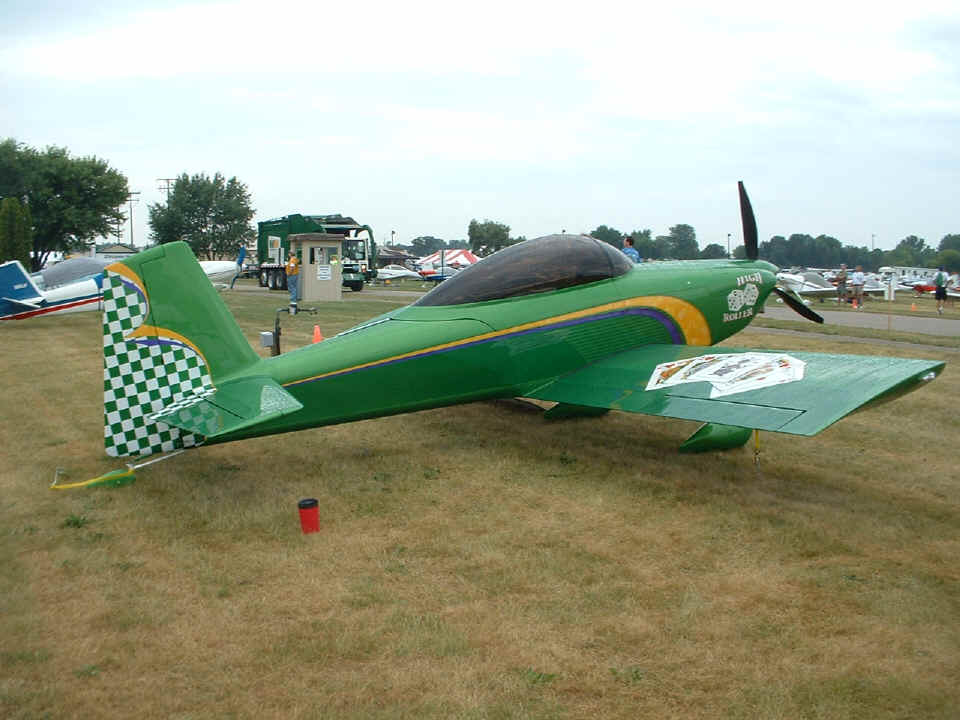 The poker hand on the right side also shows the proof of the "raindrop rhapsody" that occurred overnight to keep me from getting a good night's sleep in my tent.  The fine print on the joker gives the artist credit for his work.  Take notice of the shading around the Joker and the King of Hearts that gives the 3D depth-of-field illusion. 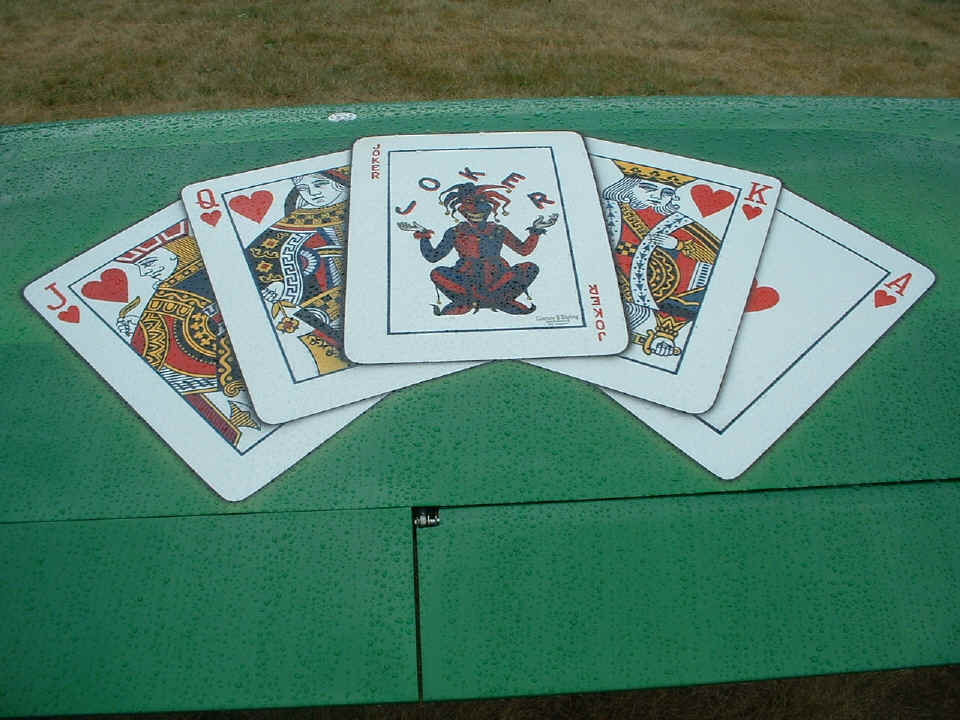 The left wing has a similar poker hand in spades.  The builder/pilot gets credit for his creation on the joker.  I get the feeling he is a graduate from Georgia Tech, although he lives in California.  The Yellow Jacket is the team symbol for Georgia Tech sports teams. 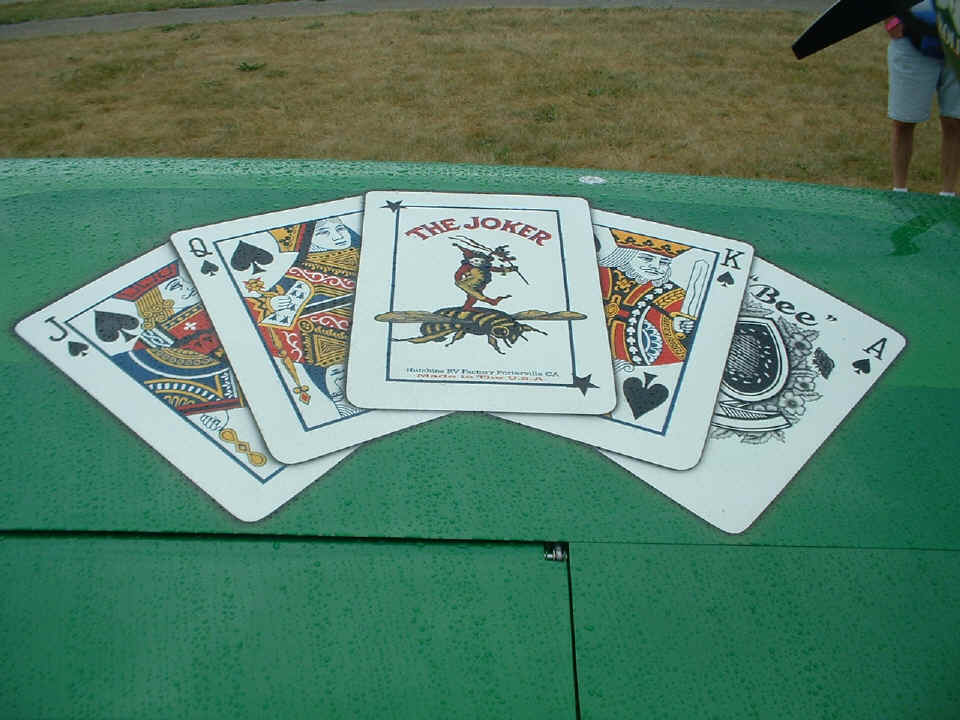 And just in case you did not get the idea on top of the wings, the backs of the playing cards are visible on the bottom of the wings, as seen in this raindrop-covered mirror.  There are errors in this artwork.  Can you tell what is wrong?   Think about what you see here and in the photos above.  I will provide the answer at the bottom of the page just in case you cannot figure it out. 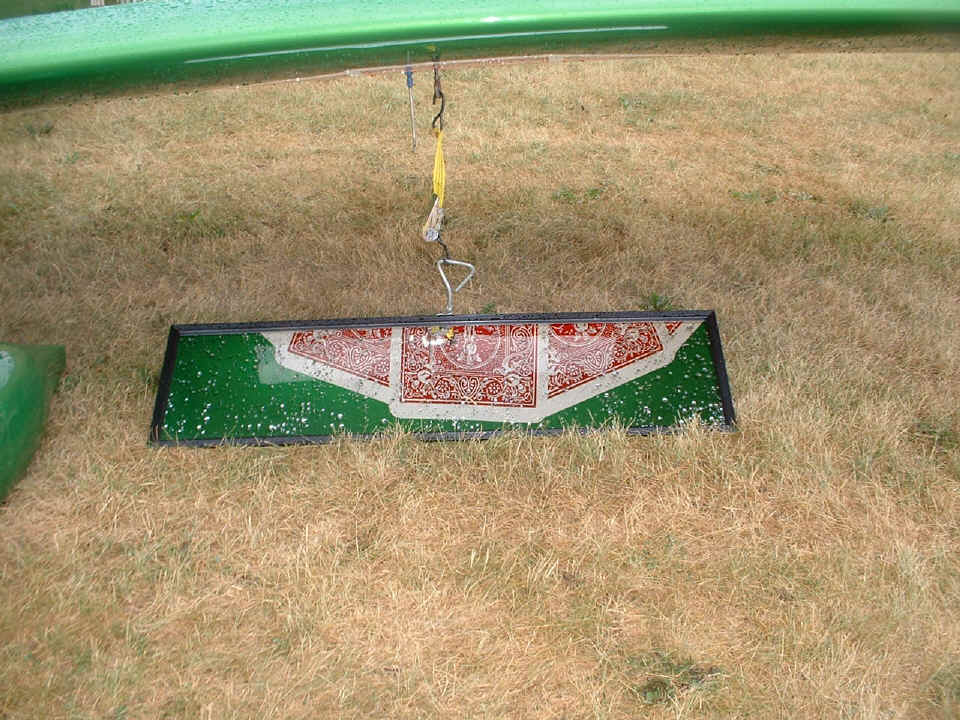 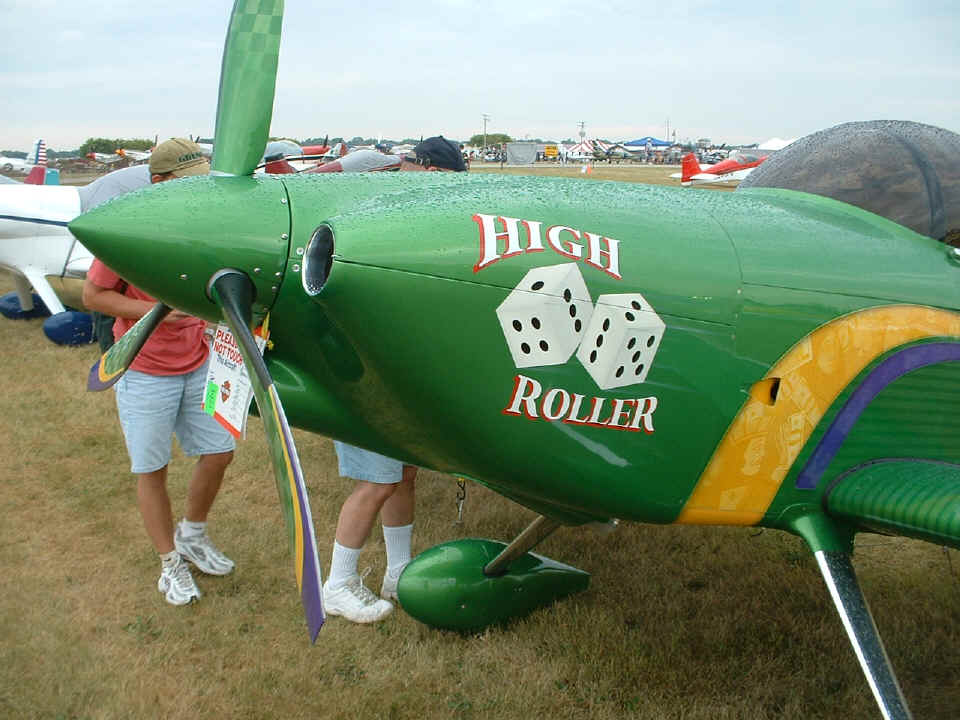 In case you did not discover what is wrong with the artwork on the underside of the wings, I will now reveal the error in the artwork.  When looking at the cards on the TOP of the wing, note that the Joker in the center is always face up and on top of the other four cards.  IF the artwork under the wings is the back side view of the hand of cards on top, then the card in the middle should be partially covered by the others.   The cards at each end of the hand should show their entire back sides, not the card in the middle.