July 25, 2006:  Look at this!  The U.S. Air Force flew in a B1-B supersonic bomber from Ellsworth Air Force Base, South Dakota for display in AeroShell Square.  You can see that Wendell is going over to get a closer look at this BIG sleek airplane.  We had a chance to talk with one of the crew from this airplane and learned quite a lot about the B1-B bomber.  That paper work in Wendell's hip pocket consists of data sheets about various products and a quote for a Dynon D10-A and accessories.  He got a show special on the Dynon unit, and on a kit to convert one of his Dave Clark headphones into a unit with automatic noise reduction circuitry.  Guess who gets to do the electrical work on that project (ME).  I was considering getting one of those ANR kits for my old Peltor headphones.  Now I get a chance to try out the kit in Wendell's headphones. 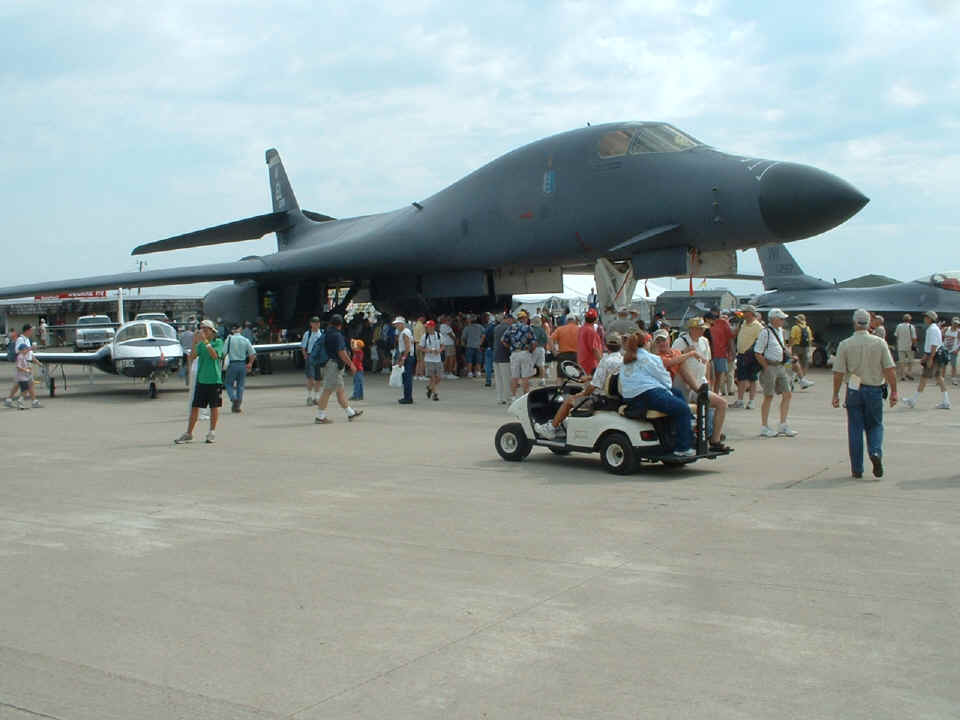 With all the photos that are on pages with the date of July 25th, you can tell that I left my camera behind at my tent on Monday, July 24th.  After lunch we went back to the vendors booths to verify that Wendell's old Dave Clark head set would accept the ANR upgrade.  Then it was off to see the sales manager at Pacific Coast Avionics to get the deal on the Dynon D10-A.  He had to pay by check to get the deal, but Wendell had come with a blank check in his wallet just for such an opportunity.  The guy offered to give us the unit right there, but we declined since the airplane was so fully packed.  UPS shipping was included with any orders placed at the show, so we took the offer of free shipping.

We stopped by the Van's Aircraft booth to find the prototype of the RV-12, a light-sport aircraft that can have the wings removed for trailering to and from the airport as needed.  Wendell just happened to step into my photo as I was taking this photo.  He had been looking at a customer-owned RV-10 with air conditioning installed in it.  That is the RV-10 wing tip at the left edge of the photo. 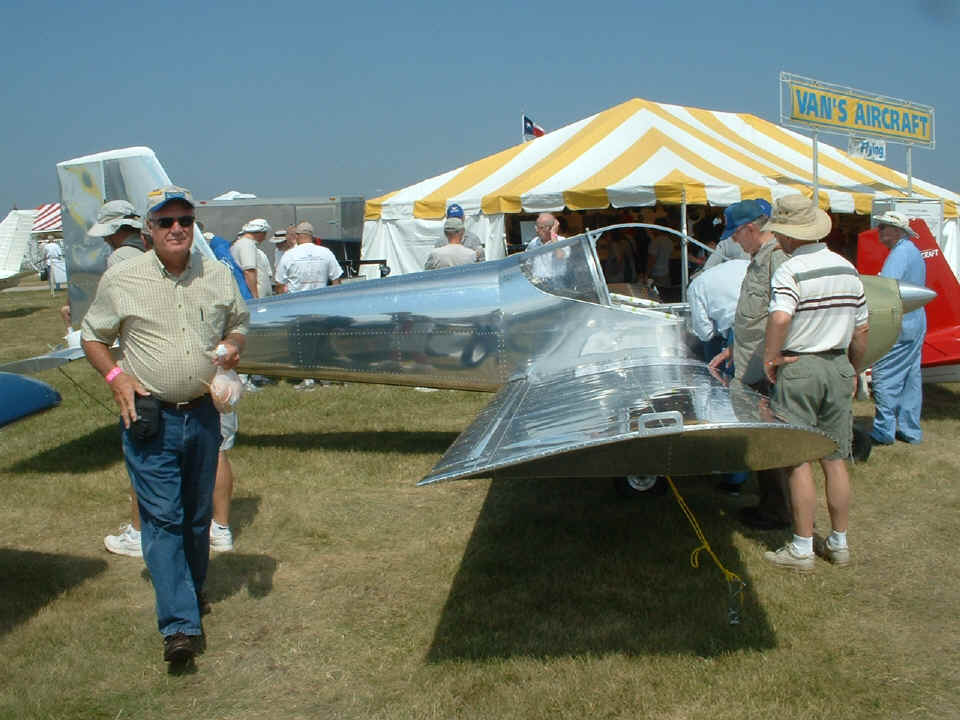 From this camera angle, you can see the RV-12 tail cone is made of fiberglass.   It is a first for Van's airplanes.  The airplane is assembled with pop-rivets only, with no solid rivets in this thing. 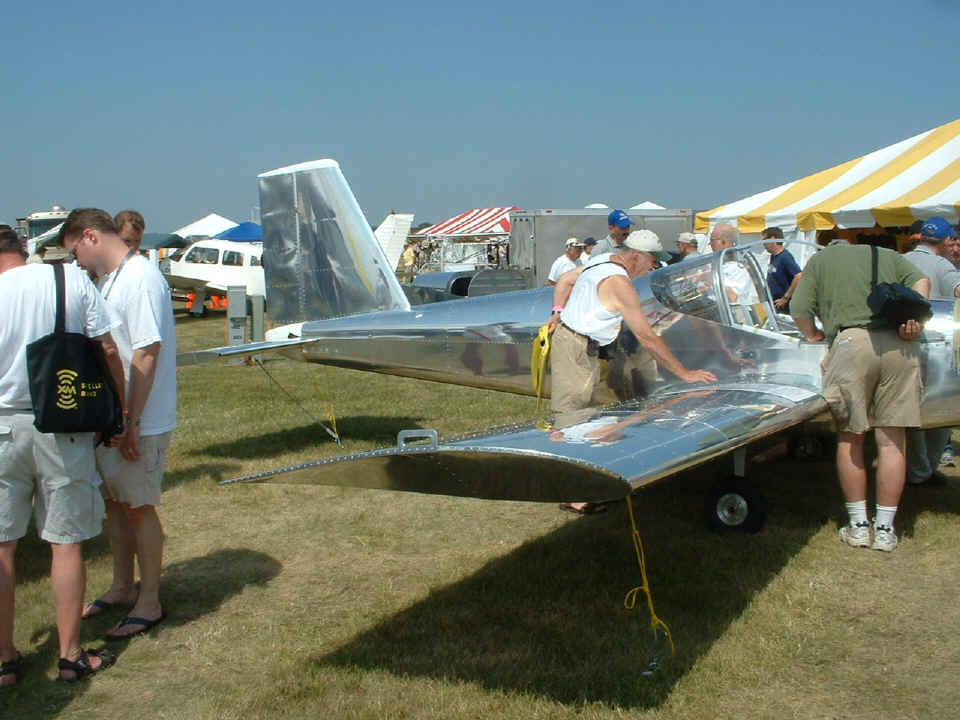 The original blue and yellow RV-9A was also on display.  This is the first one built from a true RV-9A kit.  The first one was built as an RV-9 tail dragger with an 0-290 engine installed in it and was later converted to a nose-wheel model and the engine was upgraded to an O-320.  This one was built originally as a nose-wheel airplane with an O-320 160 HP engine. 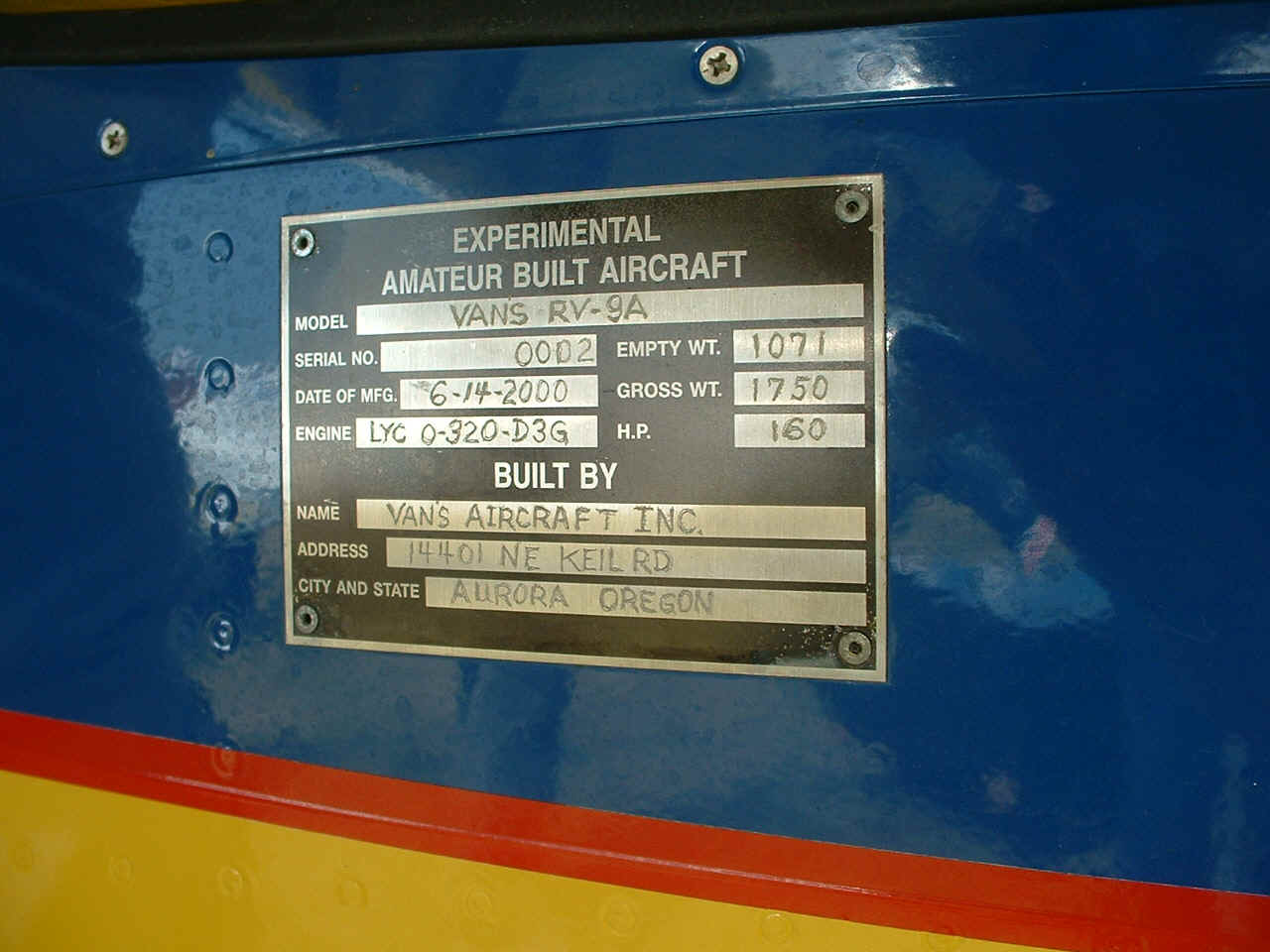 Wendell has already had his photo taken talking to Van with his camera.  I came to the "side door" of the tent later to snap this photo. 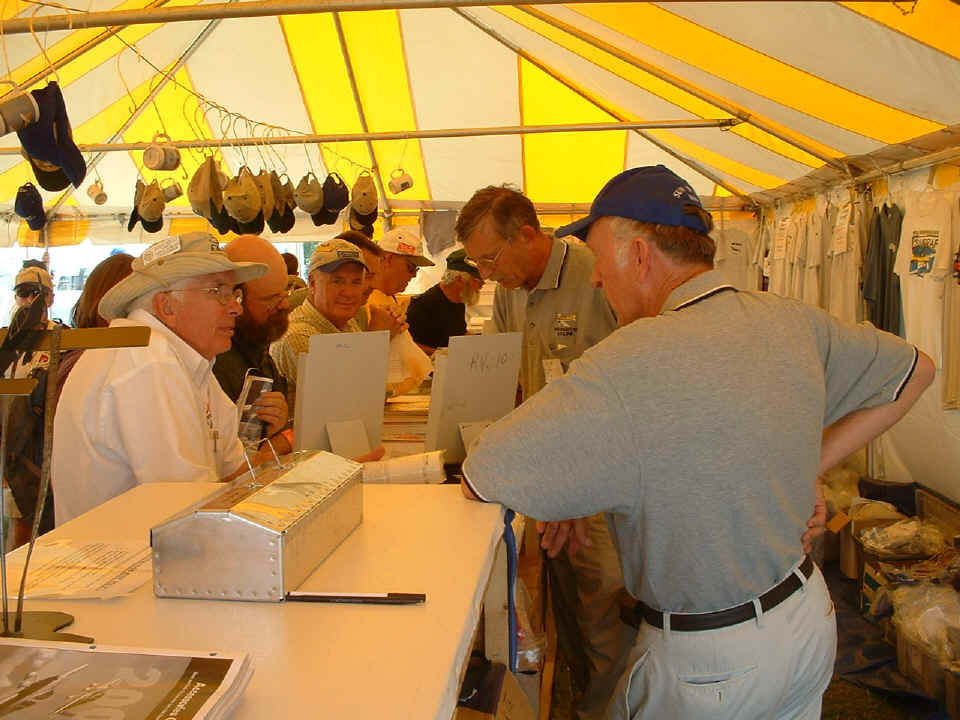 When the day was over, Wendell had placed his order for the Dynon D10-A, and we sat through a video lesson on the Garmin GPS 396 to pick up some additional hints on things we had not yet discovered.  After that class was over, we headed off to join the folks from home for a steak dinner in Appleton, away from the Oshkosh crowds.  Later that evening, it rained again when I was just getting settled on my air mattress in my tent.  That was when I thought of the phrase "rain drop rhapsody" and wanted to share it with you in these pages.

Shortly after I took the photos above, I was walking across the road into the home-built parking and camping areas when David Edgemon was heading toward the area we had just vacated.  He had arrived today from the Moontown airport near Huntsville, Alabama.  When I went to his airplane later in the evening, I discovered he was not camping out that night, but had found some space in a friend's motor home for Tuesday night.

July 26, 2006:  Wednesday presented another overcast sky early in the morning.  Some breaks in the low-hanging clouds occurred and the departures began.  We stopped by the flight service office after breakfast and got the bad news on the weather.  Our short route north would not be duplicated on the way home.  By the time we were packed and ready to go, the low clouds had cleared considerably to a scattered coverage.  There was a large area of storms between Saint Louis to Chicago and across lower Lake Michigan moving in an ENE direction.   The others heading in my direction wanted to tag along when they discovered Wendell had a Garmin 396 aboard the "Enterprise" for the trip home.  The 396 provides near real-time weather radar and other information appropriate to flying in or near bad weather.  The first to join up was Jim Harchanko with his RV-7A, followed quickly by Bob Butler and his RV-6A.  Both are members of TVRVBG in the Huntsville, Alabama area.   Another TVRVBG member, Ed Siegler, had also been considering joining up with us, but changed his mind after getting a weather briefing at the flight service office.   He decided to stay until Thursday, July 27th for his flight home.  The last one to join our flight was Marshall "Jake" Jacobson with his RV-8 heading for Athens, Georgia.   Here is a photo of his RV-8 flying off my left wing.  I had the video camera running, but I also wanted to get this digital camera snapshot for higher resolution than video snapshots provide. 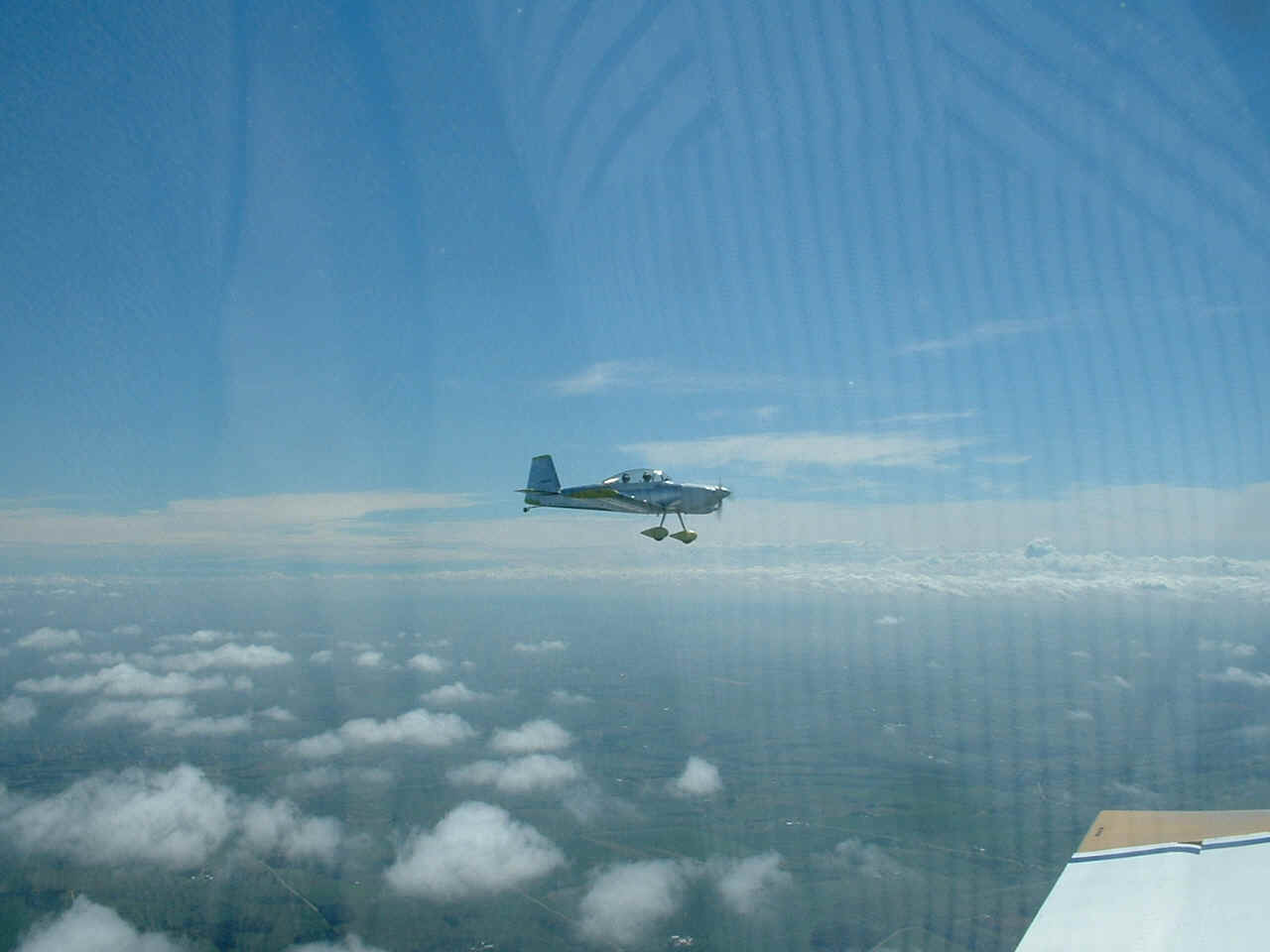 When we began this flight, we were looking at the Chicago area weather hoping to see a break in the rain showers and thunder storms to save us many miles of flying around the west end of the weather.  This photo was taken as we were flying across northern Illinois parallel to the towering weather and clouds you can see off in the distance.  Oddly enough, the winds here did not affect us too much, if at all.   The true airspeed matched the GPS ground speed for most of this flight from KOSH to MO8 near Brookfield, Missouri.  The price of gas there was very good at $3.24 per gallon for 100 low-lead self-service.   The airport was unattended as I had expected.  There is only a porta-potty by the fuel pumps.  Access to the office and the soda machines inside was easy by entering a four-digit code in the door lock.  There were some FREE snacks on top of the drink machines.  It was very hot here in the middle of the country when we stopped for fuel.  And would you believe I did not take a single snapshot on the ramp!

Back in the air again heading across Missouri toward Kentucky and Tennessee, everyone moved at their own pace.  We all stayed on 122.75 MHz and I heard the RV-8 drop into Cape Girardeau, Missouri to add additional grease to his constant speed propeller.  Marshall had mentioned that could happen, and it did.   Since I was the heavy guy with the lowest power, Bob and Jim pulled away at their normal cruising speeds to get home to Alabama as quickly as they could.  There were a number of storms passing their home area, and it turned out that I was talking with them later in the flight providing Nexrad radar information from the GPS 396. 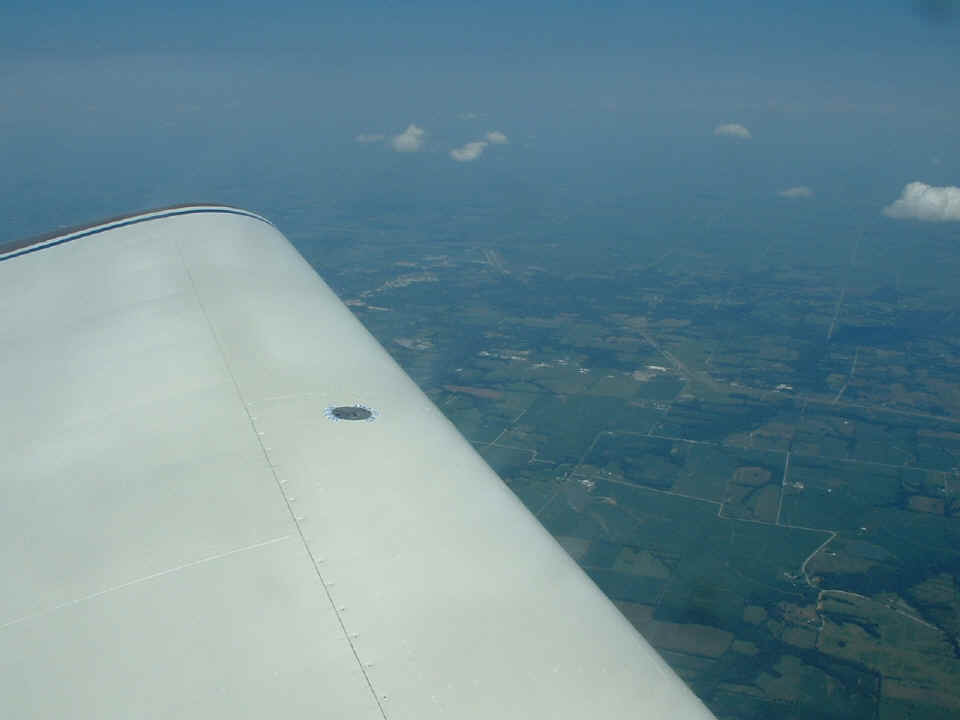 As Bob and Jim pulled farther out in front, I climbed higher to take advantage of any tail winds available up high.  For a while, I picked up 30 MPH, then 20, then 10.  I was able to continue providing them storm cell advisories as they neared their respective airports at Decatur and Moontown in northern Alabama.  You can see the stationary front far off in the distance over southern Tennessee from my high vantage point over Missouri. 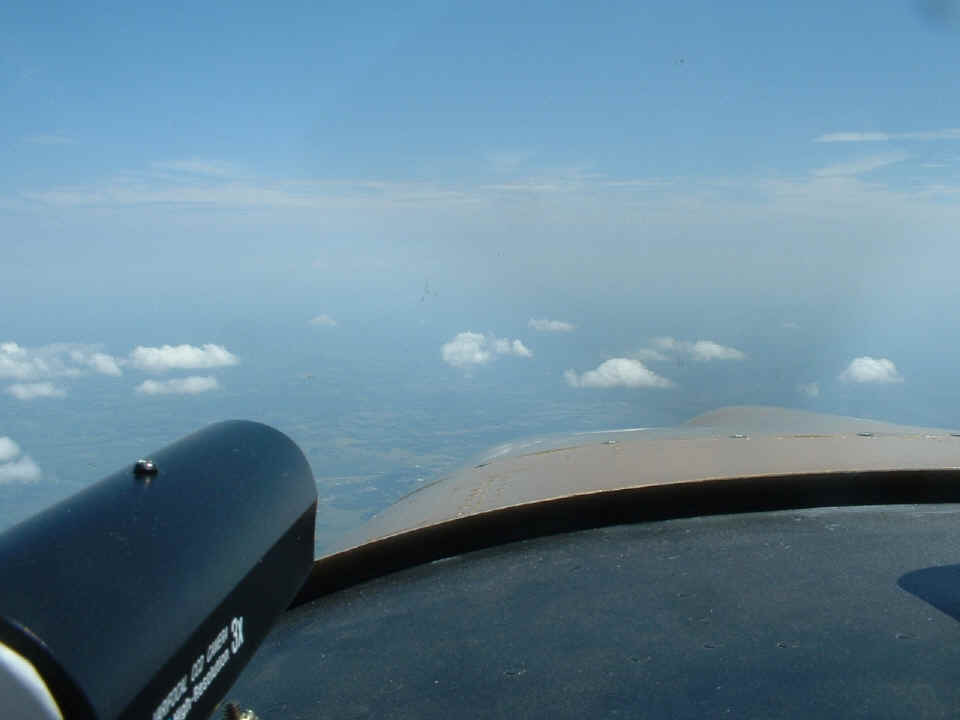 Here is my last photo looking EAST at the Mississippi River with a river tug pushing barges downstream.  That is southern Illinois across the river.  We passed by Saint Louis on the west side and found nothing of the earlier bad weather and sigmets for hazardous weather.  I had considered going down the western portion of Illinois on the EAST side of Saint Louis when we passed north of Peoria, Illinois.   The fuel stop on that route would have been at the airport serving Litchfield, Illinois (3LF).  The GPS 396 depicted some storm cells along that route that were moving away from Peoria and Litchfield, but the group chose to continue to MO8 for the better weather there and the guaranteed lower fuel prices. 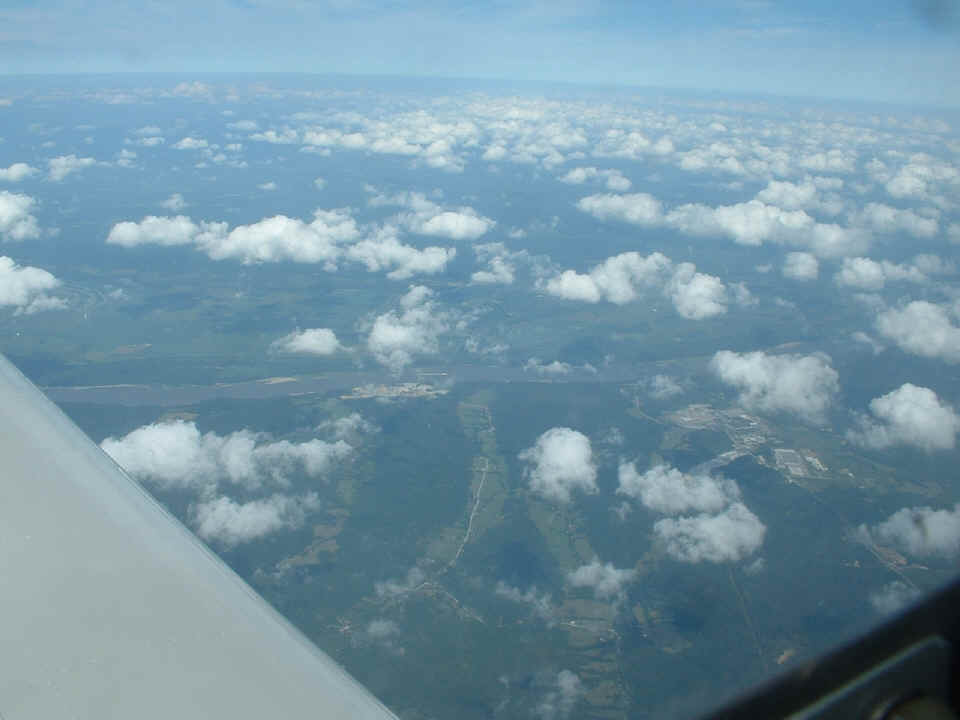 Here is my last photo of the day taken from the Murray, Kentucky area looking ahead along our direct course for home.  We stayed at 13,500 MSL for as long as possible.  We started down when we got to those big clouds near Nashville and Murfreesboro, Tennessee.  We turned a bit in the Nashville area to avoid some towering cumulus clouds that were in the 16,000-foot range.  When I saw a layer that was around 12,000 feet, I realized it was time to begin our descent for Chattanooga under the cloud decks. 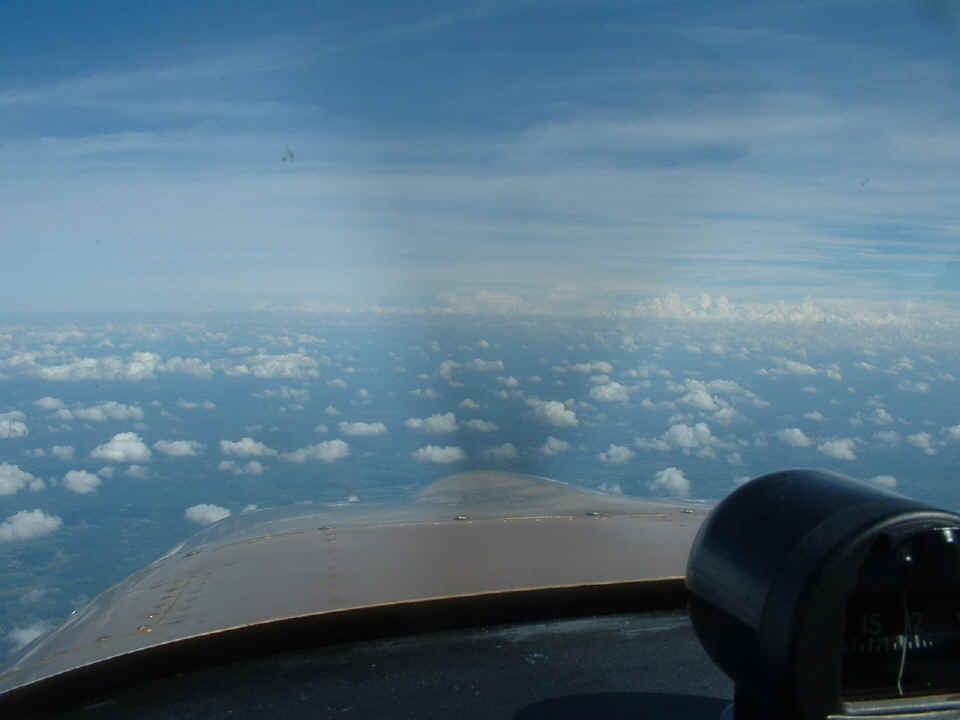 When we got under the lowest cloud layer, we could see the storms we had been spotting on the Garmin GPS 396 XM weather radar for Jim and Bob as they headed into northern Alabama.  Those rain showers had moved closer to our route of flight.  As I approached Lookout Mountain from the northwest, some of the rain showers were off to our right side no more than three to five miles.  I did see a few rain drops hit the windshield, but only a few.  We passed over the mountain and remained outside the Chattanooga class-C 10-mile ring.   The wind was reported at 270 degrees from Chattanooga ATIS.  We decided to make the approach to Folks Field from the south since we would not have to cross the wires at the north end of the field.  Remember my long takeoff roll when we left home last Sunday?  It was back in the landing roll since the airplane still had a heavy load.   We did get home with less fuel than we had at the first takeoff, but I could not tell if that made any difference in the ground roll to a stop.  I normally land solo with my stop easily made at or before reaching the hangar from the southern approach.   This time, we rolled to a stop by the house.  Wendell seemed to think we had a bit of a tail wind instead of 90-degree crosswind during the landing.  The time was 6:20 PM Eastern time when I turned off the engine on the ramp.  The total Hobb's meter time for today was 6.3 hours from engine start at the campground, taxi to runway 18R at KOSH, and the two flights to make it home.  The total Hobbs time for the week is 11.3 hours, which brings the time on the airplane to 200.9 hours.

As for the remote video camera, it kept getting unplugged in the temporary tangle of wires below Wendell's legs.  That tells me it is time to consider a more permanent wiring situation in the near future.  The video tests and my first real video are history.  It is time to finish the installation of the video system to a more permanent condition.