June 24, 2006:  The first day of the Rocky Mountain Regional Fly-In was Saturday, June 24th.  When I woke up in my motel near I-70 and Airport Road (to DIA, not FTG), the weather outside was solid overcast, and hanging low over the area.  I was glad I was not among those nearby pilots planning to fly to the Front Range Airport.  I grabbed a quick bite to eat at the motel and headed for the airport to get my airplane out for the 1.3-mile ground taxi to the fly-in event site.  I later discovered that the airport "West Ramp" was where the large majority of hangars are located, along with the FBO and self-service fuel pump.  The "East Ramp" has a fire station on it, some T-hangars, and a large area for camping and the RMRFI event area.  The photo below was actually taken on Sunday morning as I was preparing to depart.  I wanted to insert it here to show the view from the Eastern edge of the "West Ramp" looking East, beyond the control tower at the event site about one mile from my camera location. 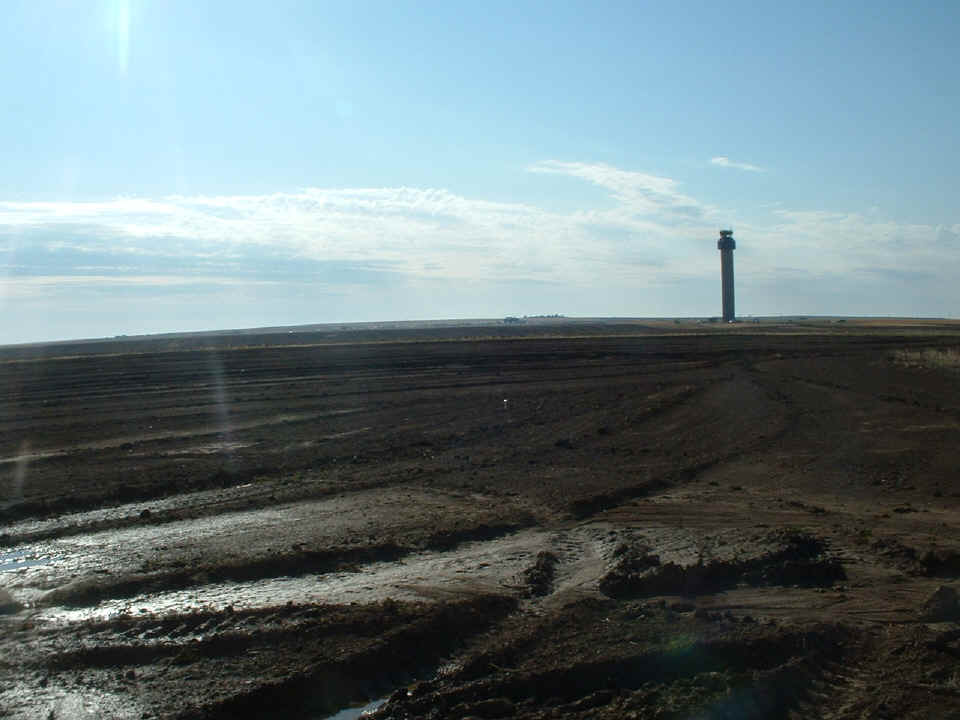 In case you are having a hard time finding the Fly-In site,  it is in the center of the picture, just below the horizon.  This snapshot gives the real impression of the open prairie of the Great Plains expanding to the East from the Rocky Mountains.  That tall control tower is easily visible from Interstate Highway 70 which is 3.3 miles south of the field.  The map below shows that distance, but some of the details are incorrect.  For instance, the red line that is North Manila Road runs parallel to the north/south runway and ends at the intersection of the road that is just below the airport symbol.  That East/West road also ends at the intersection with Manila Road.  The RMRFI was held in the area just North and East of the N/S runway on the East Ramp.  The photo above was taken at the end of the green line in the map below.

When I arrived at the entry to the event area, one of the ground crew asked if I wanted my airplane judged.  I noticed some other arriving aircraft were being parked adjacent to the taxiway that parallels the North-South runway near the site.   I said yes to the judging and was directed into the parking area at the event site.   My parking spot ended up being the last one on the north end of the line with the airplane facing East.

When I got parked, I started to clean the airplane and began talking to many people coming by to ask questions.  I took over two hours to complete my cleaning with all those folks coming up to ask questions about the construction of the airplane, the video camera installation, engine power, cruise speeds, fuel consumption, range, etc.   I took a break for some late lunch and realized only when the air show was over at 3 PM, that I had not taken a single picture on the flight line.  I had a chance to speak with the reps from Van's Aircraft when I was down by the food vendors.

I packed up my easy chair that I had been using under the horizontal stabilizer to stay out of the sun.  I love the fact that the RV-9A sits so tall on the landing gear!  I taxied the airplane back to the hangar and put it away for the night.   The next thing to do was find the location of the Saturday night banquet since I had bought a ticket for it earlier in the day.  These were some of the early to arrive flyers of EAA chapter 43. 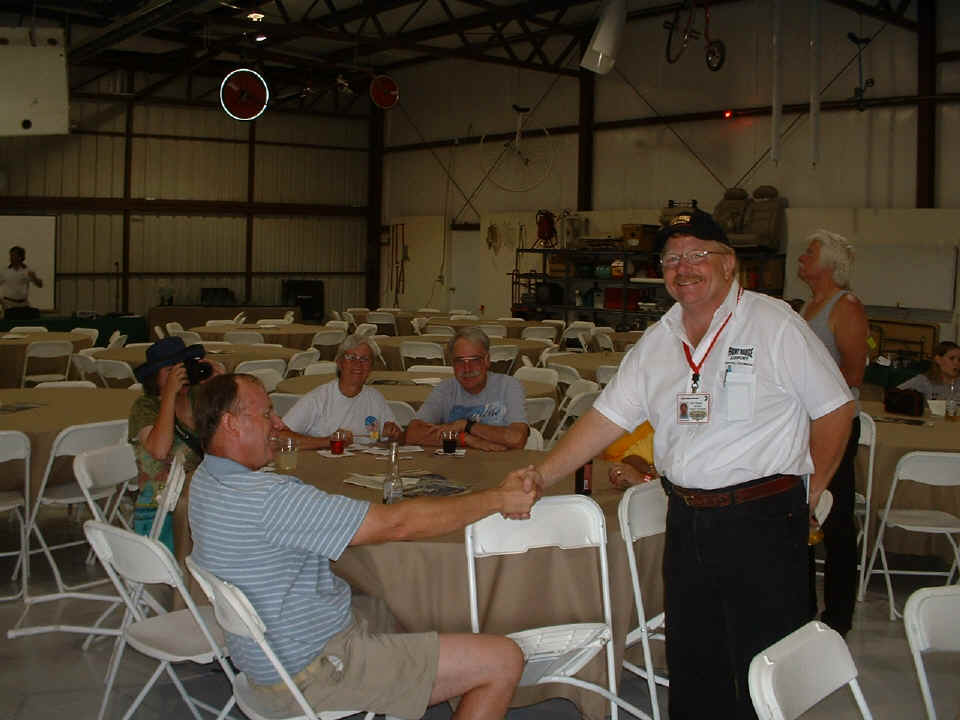 The catering was first class with appetizers promptly at 5 PM.  Beer and wine were also available at the bar.  By now you may have noticed the collection of classic bicycles and motorized bicycles around the facility. 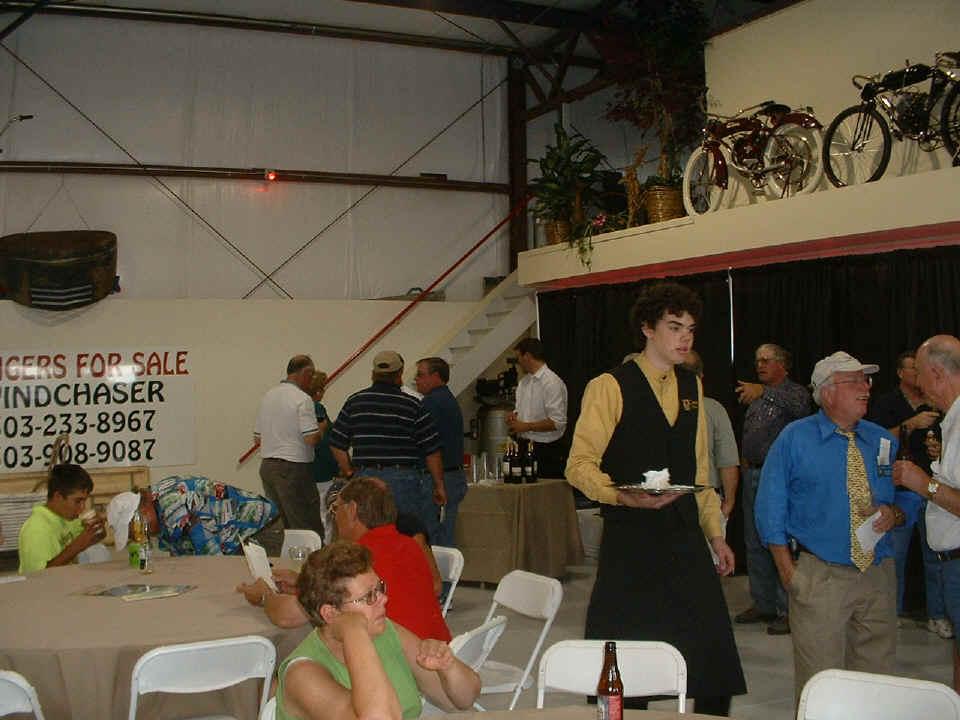 June 25, 2006:  Sunday morning came and it was time to pack the airplane for the trip home.  I got to the hangar at almost the same time as Scott McMillan arrived to get his airplane out before the beginning of day 2 of the RMRFI.  As usual, I was about an hour later than I expected by the time the plane was loaded and ready to go.  I had to be sure that I was rested from yesterday's activities before beginning a long flight home.  Scott had already secured the hangar and taxied his Yak away before I finished loading the airplane from the rental car.   I left the car here and taxied the airplane back to the FBO to turn in the keys and mileage numbers for the car.  The receipt for the rental car was time stamped at 7:41 AM Mountain Time / 9:41 AM Eastern.  My FBO ramp departure time would be about 9:45 AM Eastern time from the Front Range Airport.  The ramp guys would pick up the car at the hangar. 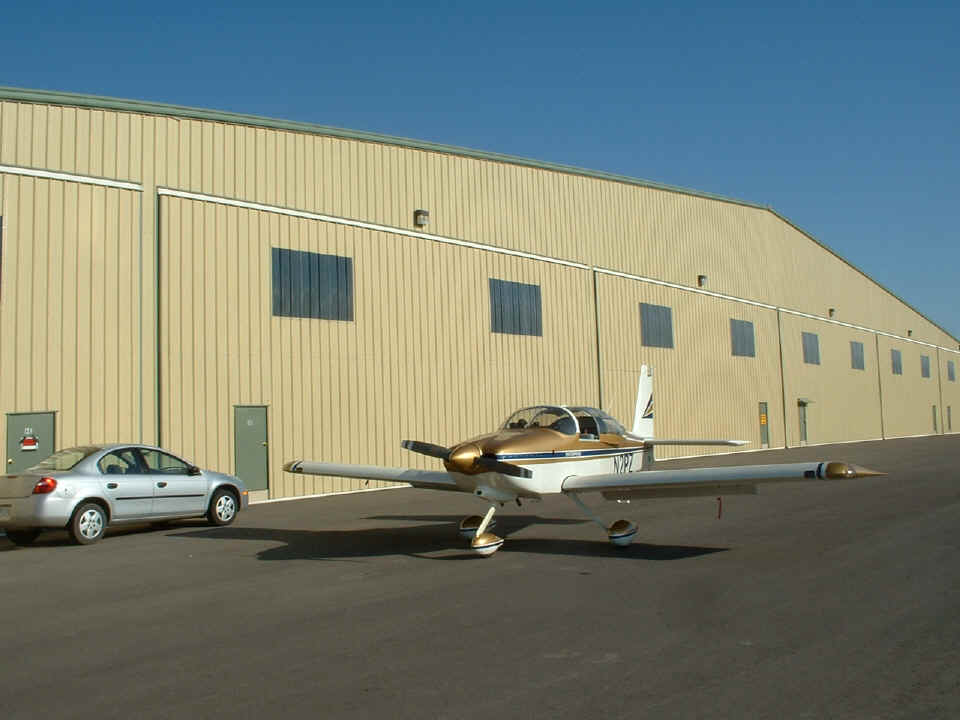 Here is a video "snap shot" showing some of the cloud cover around 12,500 as I was passing by at 13,500 headed East.  This is located in the western end of Kansas 'somewhere' out there.  There were a few patchy cloud formations before things opened up for a while. 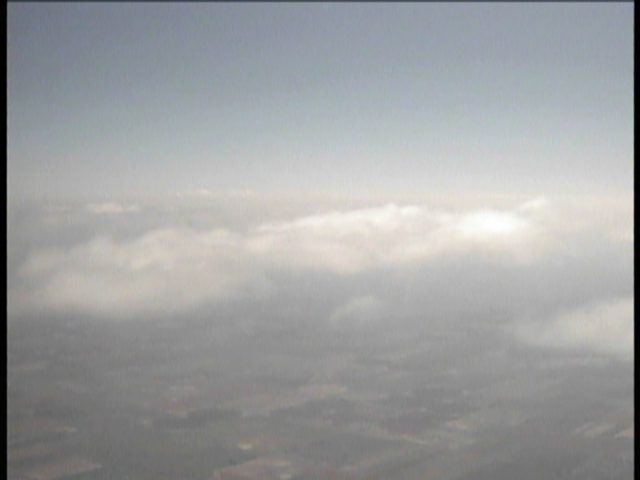 The time stamp on this photo is 10:54 AM Eastern Time.  That is Hoxie, Kansas out there behind the aileron about EIGHT miles north of my course line as seen from 13,500 MSL.  It measured about 218 miles from the Front Range Airport on my digital map program.  Any way you slice it, I had a 30 MPH tail wind helping me get a good start on my trip toward home. 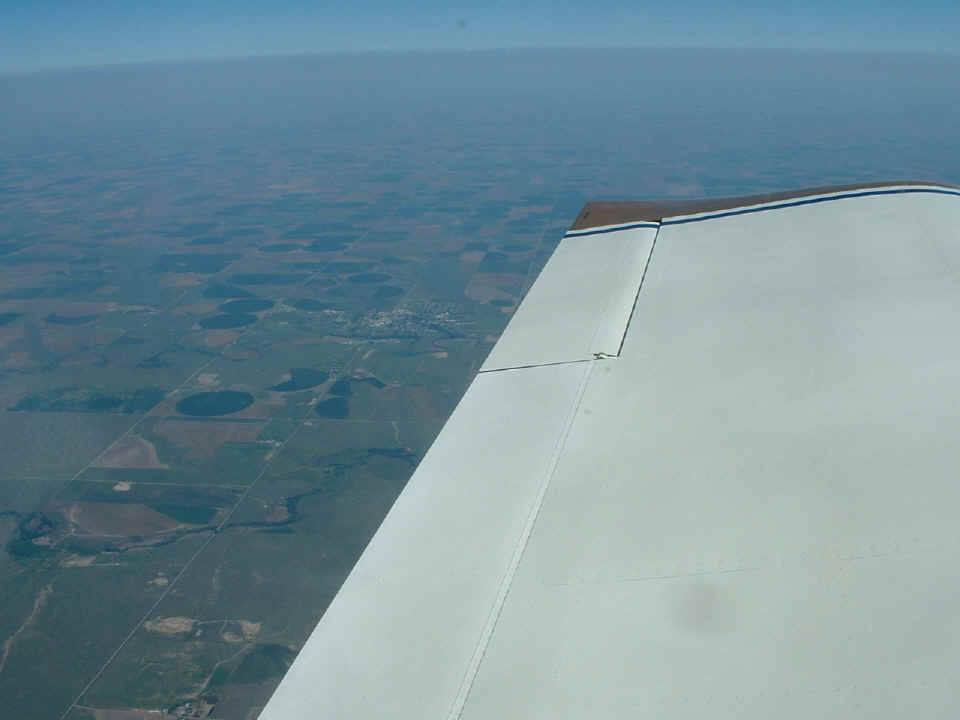 My morning flight was interrupted with an unplanned comfort stop at Russell, Kansas (KRSL).  I made a rapid descent at 2,000 feet per minute and still managed NOT to shock cool the engine.  This is a shot from the video approaching the airport from the west.  Interstate 70 is the super highway at the right side of the photo, just south of the airport. 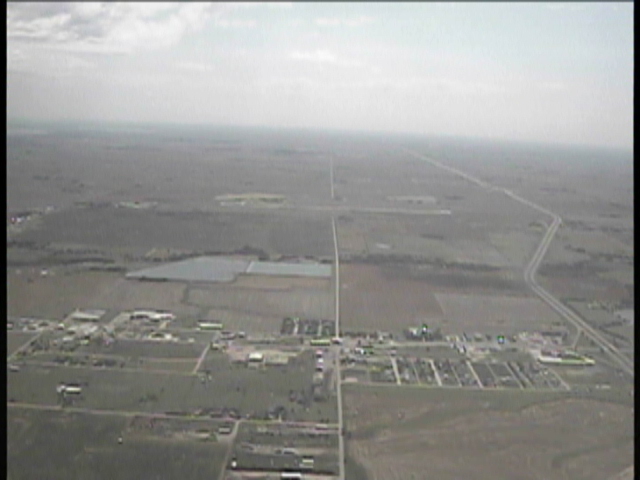 Here is the final approach to runway 35.  There is only one car visible on I-70 as I passed over to line up with the runway.  I was the only airplane around the area. 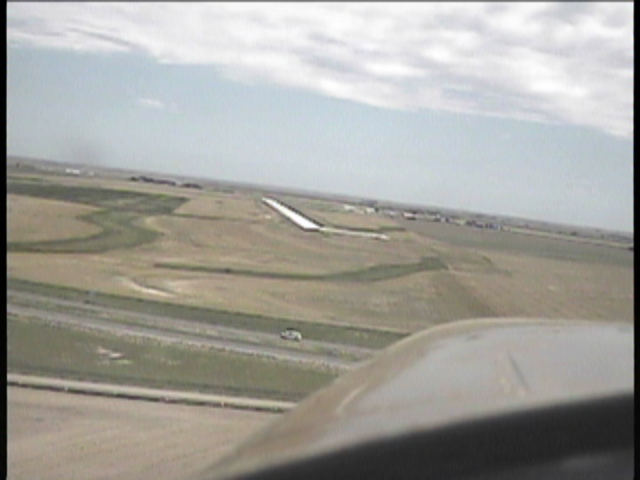 Over the numbers and reaching for the touchdown zone at KRSL.  No, I am not banked, I just did not have the video camera level with the horizon.  There was a slight cross wind, but not that much.  I really have to put some tape markers on the back of the camera to indicate proper horizontal alignment without staring at the small video monitor on the digital video camcorder. 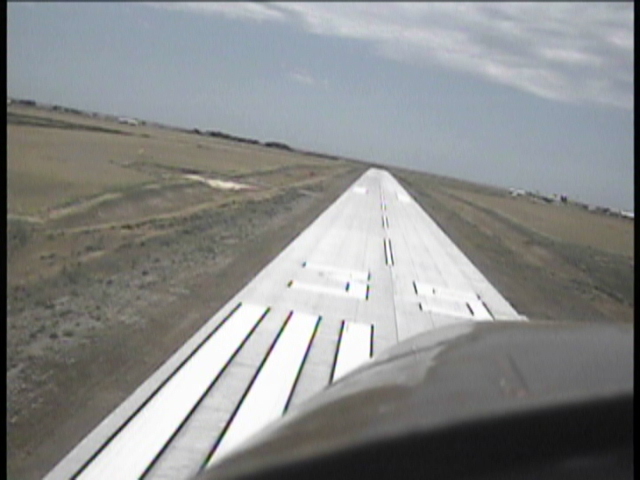 Here is a video frame right before I shut down the camera system.  The airport attendant just pulled up and got out of his car.  The engine was still running as it was in all these "video snap shots".  All I did was to select frames that did not have a propeller blade visible. 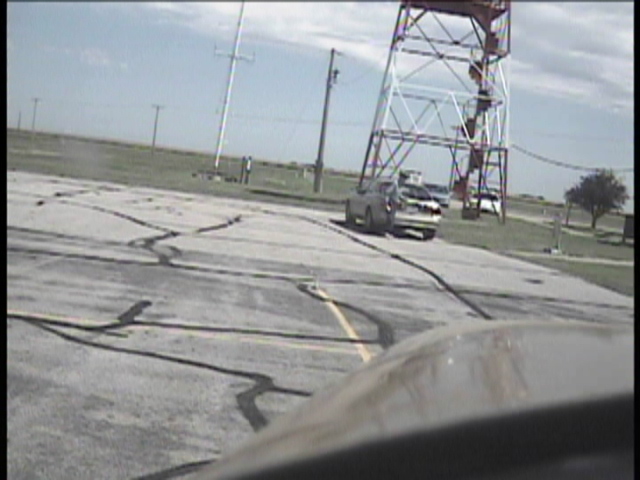 This photo was taken at 11:37 AM just before my departure.   I managed to take a video of the approach and landing to the airport here.   They have a new grooved concrete runway that is perfectly smooth.  The old WWII Army Air Corps veteran working there told me the ramp was going to be rebuilt this summer to match the runway.  By the way, this is the home town of the former Senator from Kansas and Presidential candidate, Bob Dole, also a WWII veteran. 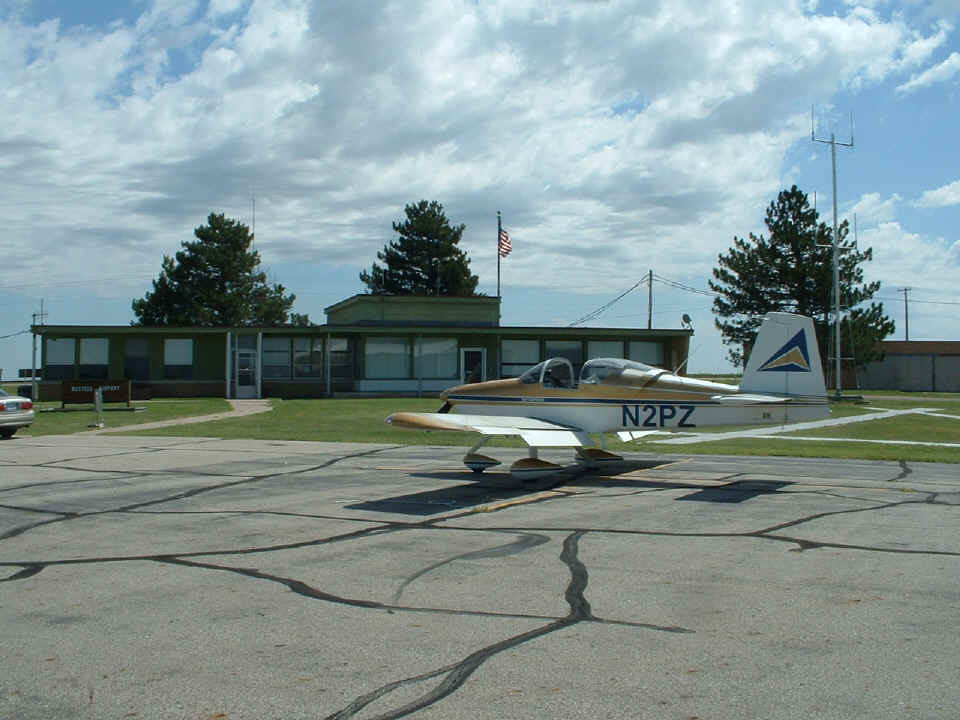 Since the runway was a mile long, and the wind was blowing straight down the runway to beat the band, I taxied down half of it, turned around and made a takeoff from mid-field.  There were no taxiways here, but that runway was the smoothest I have ever used!  I have video of the takeoff and departure from here.  When I have a chance to collect snapshots from the video, I will fill in the gaps in digital camera coverage.