December 30, 2005: I followed the Victor-3 airway between the restricted airspace over the Kennedy Space Center and the Orlando Class-B area.  This is the equivalent of following US 1 or I-95 down the Florida East Coast.   This wide shot shows all of the area East of Titusville which includes the space center and the Merritt Island National Wildlife Refuge. 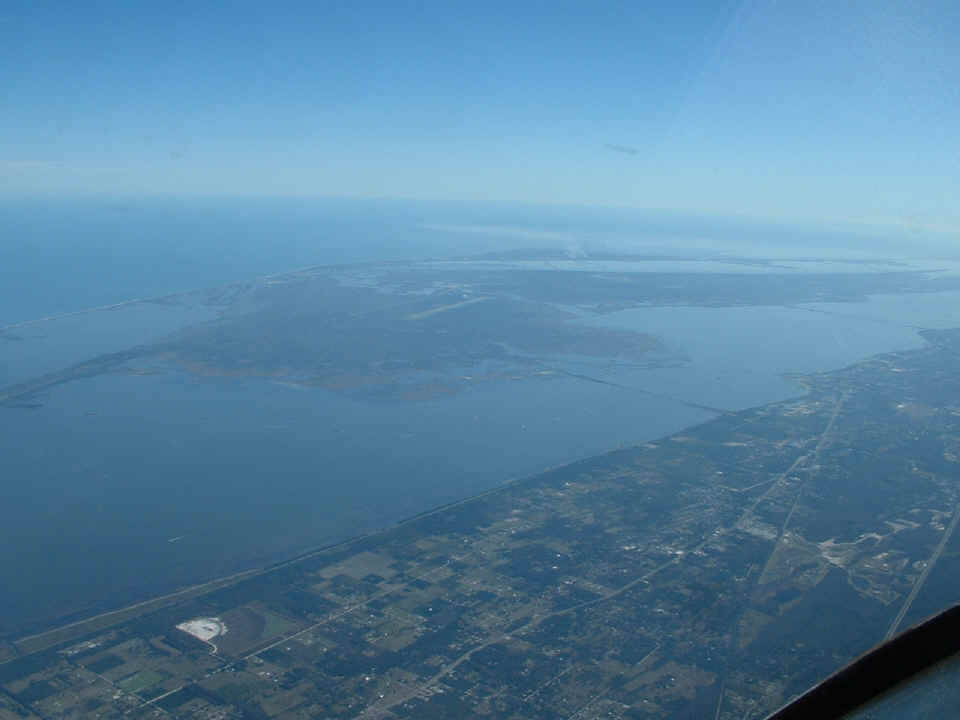 This closer view shows the 15,000-foot long Shuttle Landing Strip, the Vertical Assembly Building (VAB) and launch pads 39A & 39B where the Space Shuttles blast off into space. 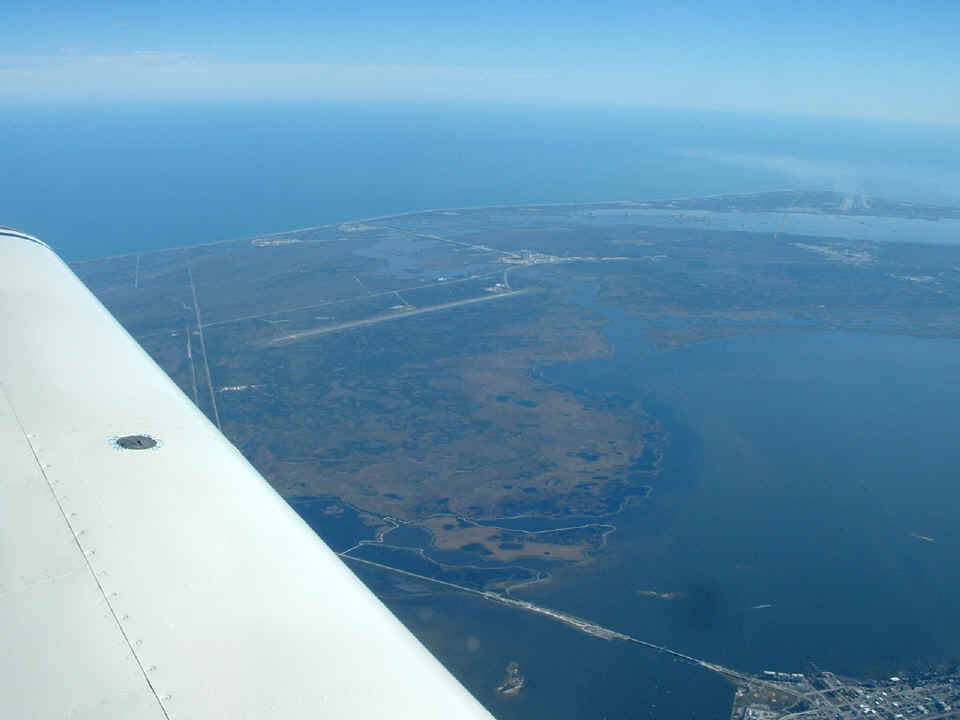 Space Coast Regional Airport (KTIX) is just off the nose of the airplane in the photo below.  At this point along the coast, the Intracoastal Waterway is known as the Indian River.  The spots on the windshield are reflections of the rivets across the dash board top skin. 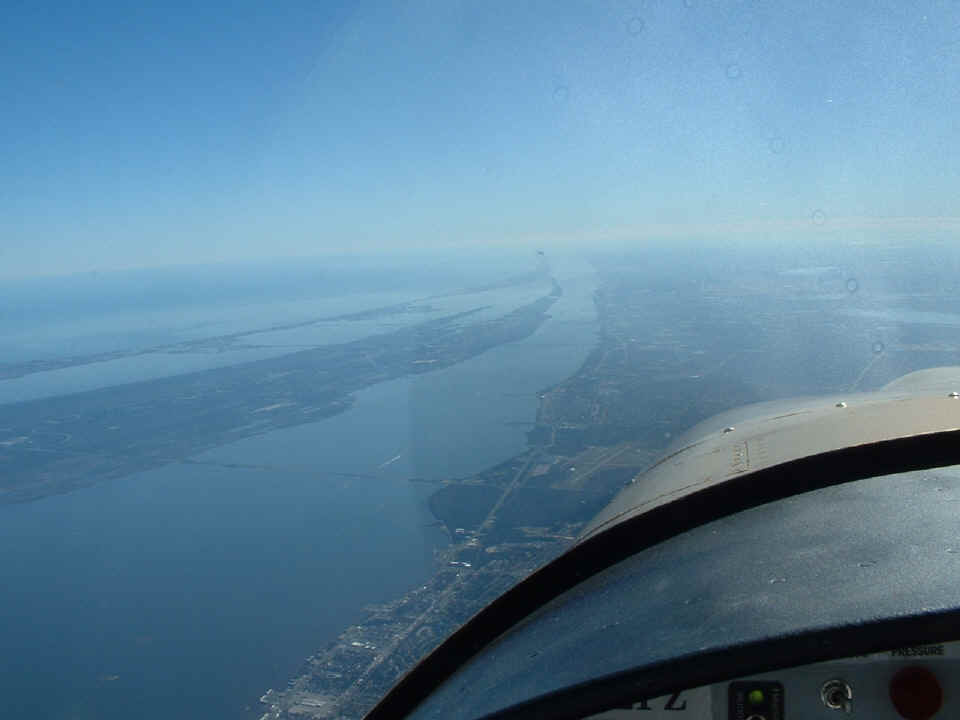 Here is a closer look at the Shuttle landing facility, VAB, and launch pads 39A & B.  The runway is about 10 miles away from my airplane.  The two launching pads are about 14 miles away.  As for trivia about the vertical assembly building:   Imagine if you could cut the Empire State Building in half, set the top half next to the bottom half, then do that three more times.  You could put FOUR complete Empire State Buildings inside the VAB, close the doors, and not know they were inside!   This is Florida where the humidity is usually high and air-conditioning is common.   When the doors of the VAB are closed and the air-conditioning is turned on, clouds can form and it can rain INSIDE the building! 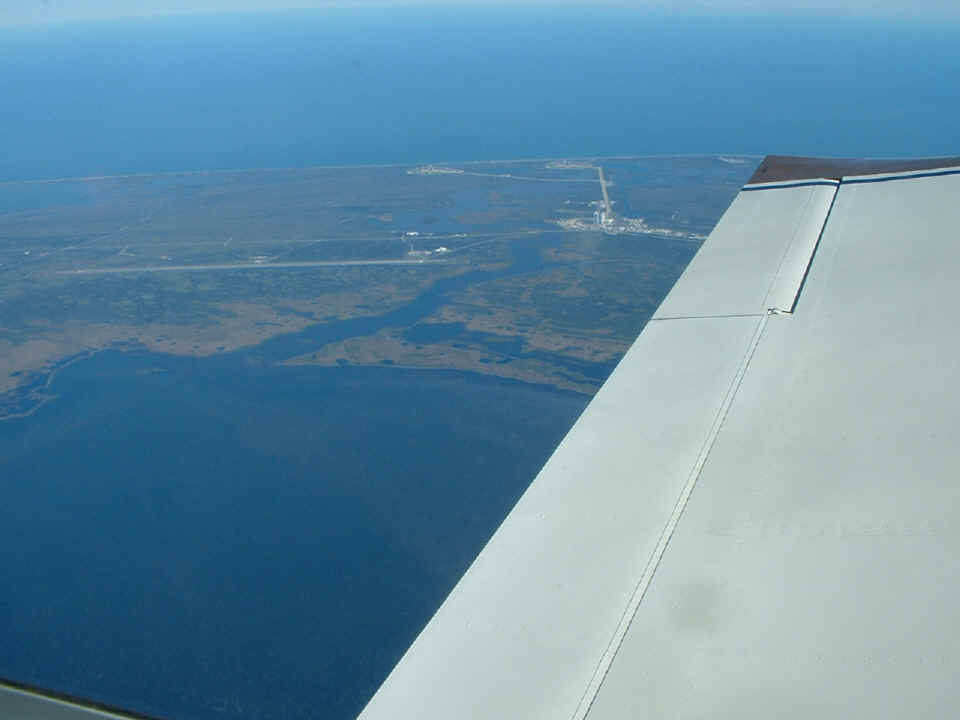 Let's not forget that the land you see here jutting out into the Atlantic Ocean is Cape Canaveral.  It contains additional launch pads and the Cape Canaveral Air Force Station with it's landing strip.  The cape is 17 miles from my location over the mainland.  The town you see at the right side of this photo on the barrier island is Cocoa Beach, Florida.  The water on this side of the cape is known as the Banana River.  Merritt Island is closer to the airplane.  The water you see at the very bottom of the picture is still the Indian River. 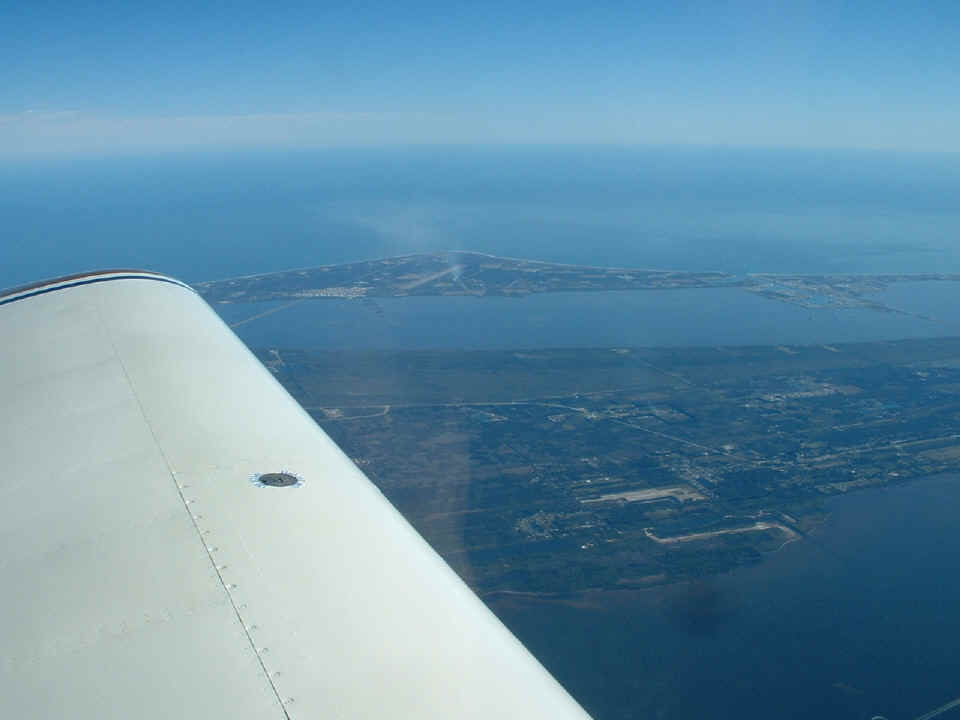 Looking south down the Indian River reveals the boat traffic that is common here.  The Banana River flows into the Indian River at the south end point of Merritt Island.  The Melbourne Airport is visible at the right side of the photo in the distance.  An interesting headline appeared in the local newpaper on the day of the first manned moon landing in 1969.  The biggest headline on the front page read "A CITY IS BORN" with a second headline of "MAN LANDS ON MOON".   It seems that the towns of Eau Gallie and Melbourne MERGED on that day.  That area where you see the first causeway is called Eau Gallie to this day.  The locals say "O Golly", while other folks may call it "O Galley".  The second causeway you see is US 92 heading out to Melbourne Beach and the coastal highway A1A.  US highway 1 hugs the shore of the Indian River on the mainland side of the Indian River. 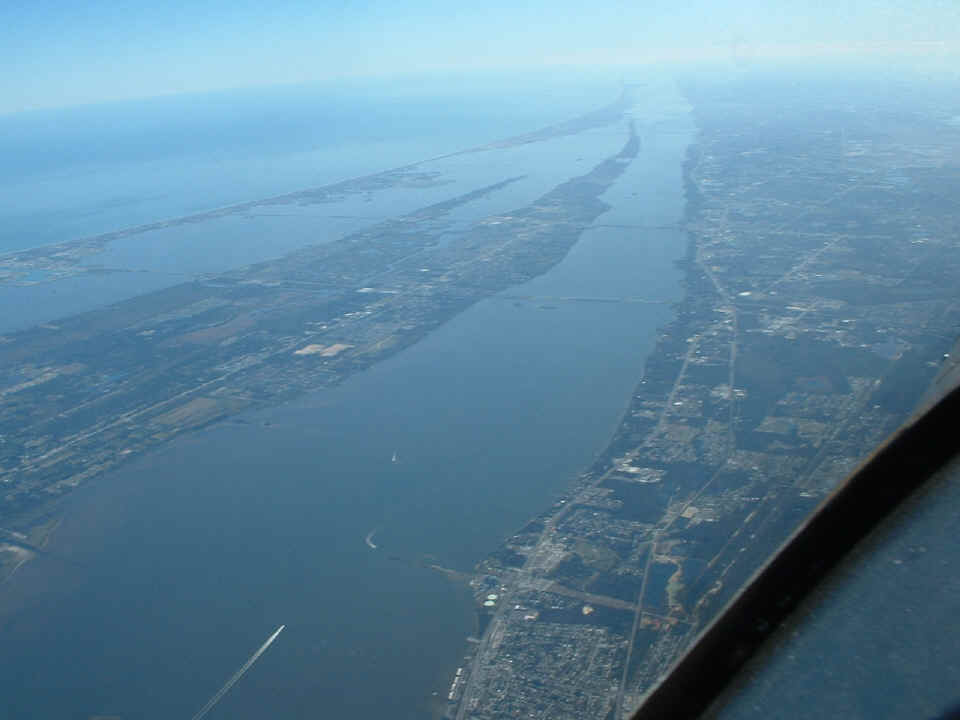 The view off the right wing includes the Orlando International Airport (KMCO) 35 miles from my location.  Look just ahead of my wing and you will see two highways converging.  The highway coming from the bottom of the photo heading off into the distance beyond my wing tip is the "BEE LINE HIGHWAY", a toll road that runs directly to the Orlando Airport which appears as a white area out there just left of the roadway where it blends with the surrounding area.  The seam of the wing skins above my wing spar points directly toward the airport.  Before it was a public airport, OIA was McCoy Air Force Base.  That is why it has the code KMCO. 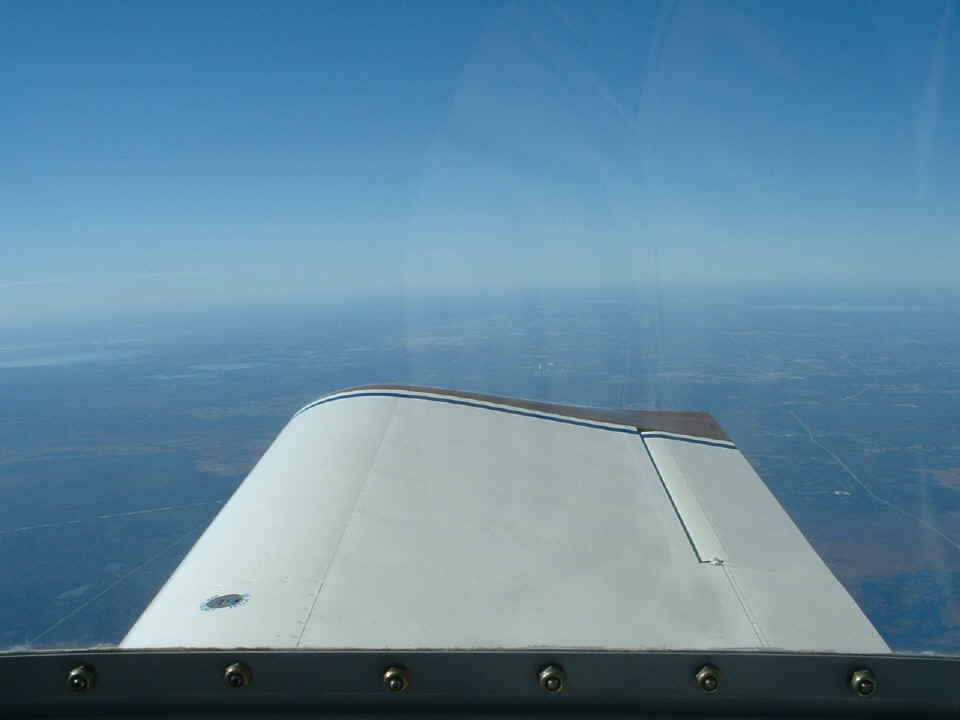 Patrick Air Force Base sits on the barrier island opposite Eau Gallie and near the towns of Satellite Beach and Melbourne Beach.  That is Pineda Causeway (state route 404) crossing Merritt Island where it is very narrow to the barrier island just south of the air base. 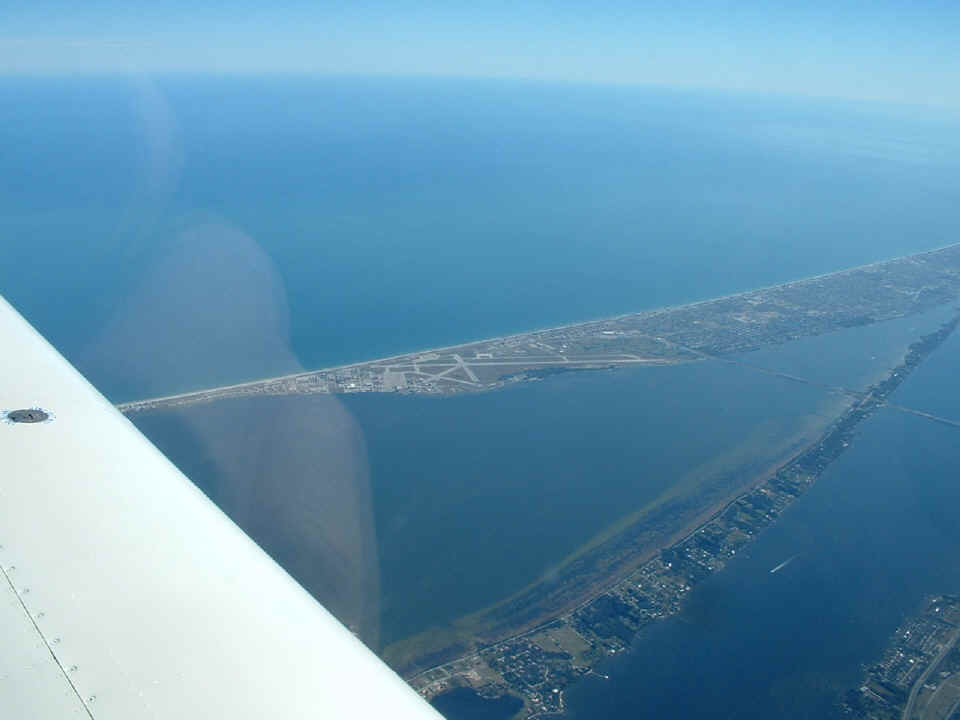