December 30, 2005: The Melbourne, Florida Airport (KMLB) is the focus of this photo.   When I first saw all the haze on the horizon as I passed Saint Augustine, I called Gainesville Flight Service to confirm the weather down south would remain clear as I had seen in the forecast.  This photo shows plenty of hazy conditions toward the southern coastal counties. 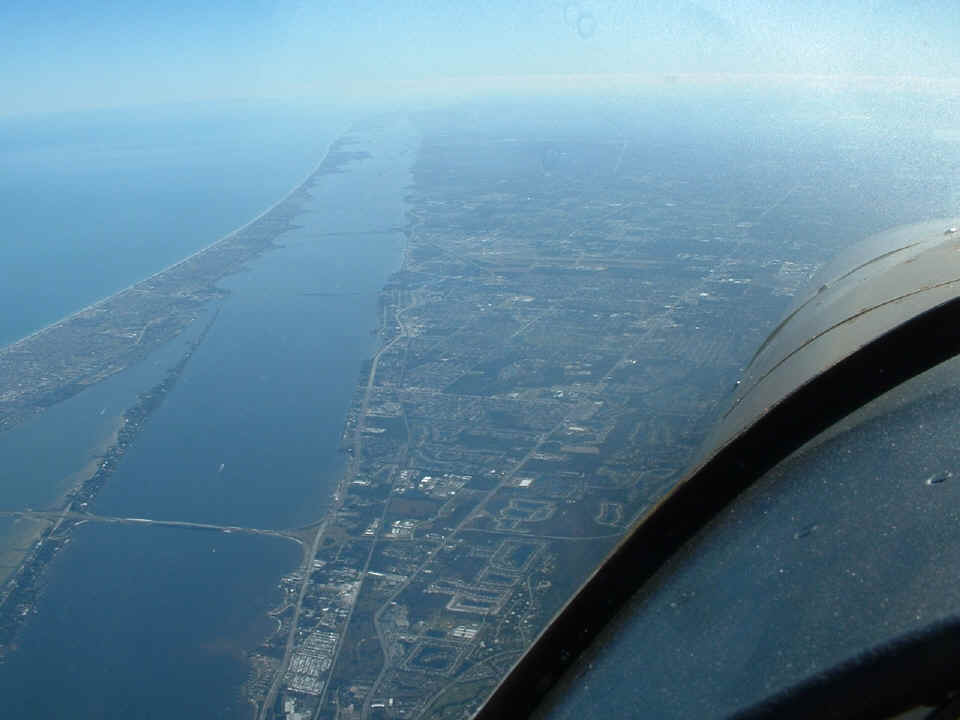 Vero Beach Airport (KVRB) is the next airport south of Melbourne with a control tower.  This is the home of the NEW PIPER Aircraft Corporation, and the home of the Los Angeles Dodgers baseball team for spring training each year.  The next airport south of this one is Saint Lucie County International Airport (KFPR) near Fort Pierce, Florida.  There is a U.S. Customs port-of-entry there for fliers returning from the Bahamas. 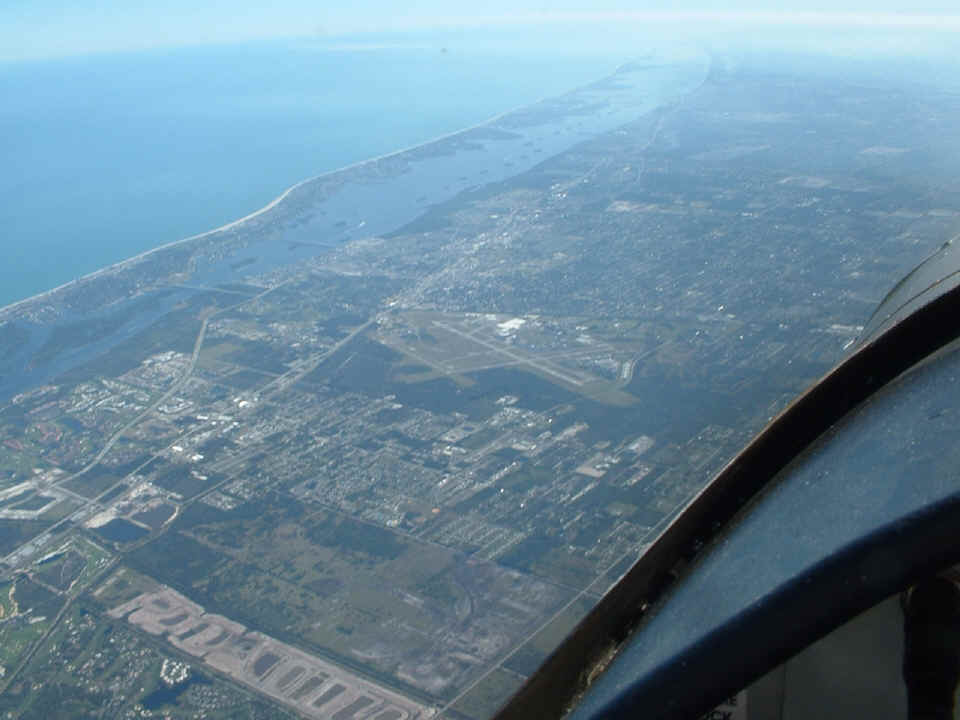 My friend Monte Errington met me at the Stuart Airport (KSUA) and we flew across Lake Okeechobee to the airport at La Belle, Florida (X14) to get fuel at the lowest price in South Florida.  I had flown about 700 miles from Collegedale to Stuart to La Belle and used only 27 gallons of fuel.  The favorable tail winds from the early part of my flight over Georgia gave me a fuel economy of 25.9 miles per gallon of fuel burned.  Monte was surprised by the take off behind the Hartzell constant speed propeller.  He had recently flown in a Cessna with a fixed pitch prop which does not produce full power during the early takeoff roll until the engine RPM can come up to near the red line.  With the constant speed prop, the engine comes up to full power very quickly at low propeller pitch and gets adjusted to cruise pitch after climb out from the airport. 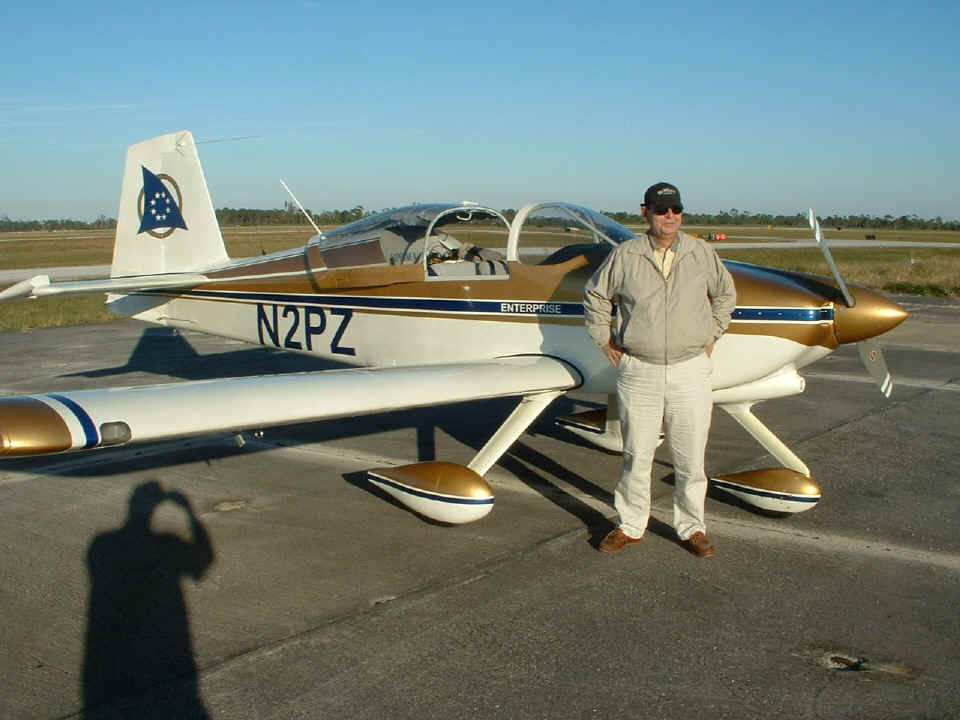 The control tower at Stuart is north of all three runways.  I am parked on the ramp near the county administration building for this photo. 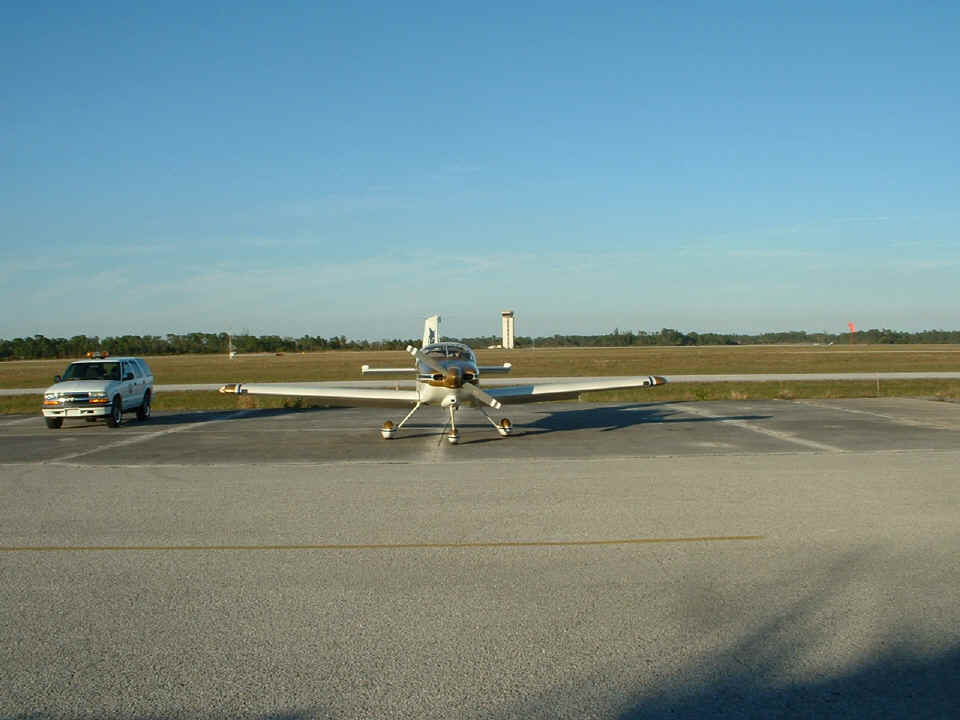 Looking toward the southeast, there are two FBO's at Stuart, both charging high ramp fees without a fuel purchase, which is also over-priced. 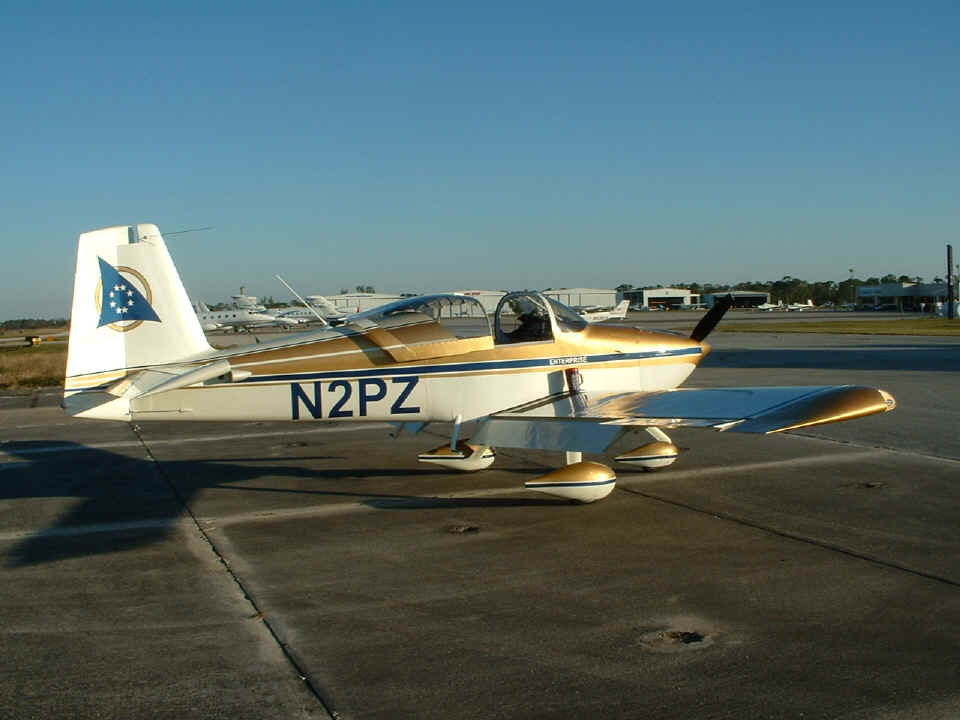 After dropping Monte off back at Stuart, I flew down to the Lantana Airport (KLNA) just south of Palm Beach International Airport.  Along the way, I circled over the Jupiter Inlet and the home of Quality RF Services, Inc.  I had a couple of friends outside waving as I flew overhead with two and a half circuits at 1000 feet MSL.  After that, I headed for the Palm Beach VOR at 2,500 feet MSL while talking with the PBI approach controller.  After crossing the airport runways at PBI, I was cleared for descent to pattern altitude for Lantana and the airport where my flight training began in October 1991.  Here is "Enterprise" parked on the ramp in the transient parking area.  The tie-down fee is only $3.50 per night!  As you can see, sunset is rapidly approaching as I took this photo. 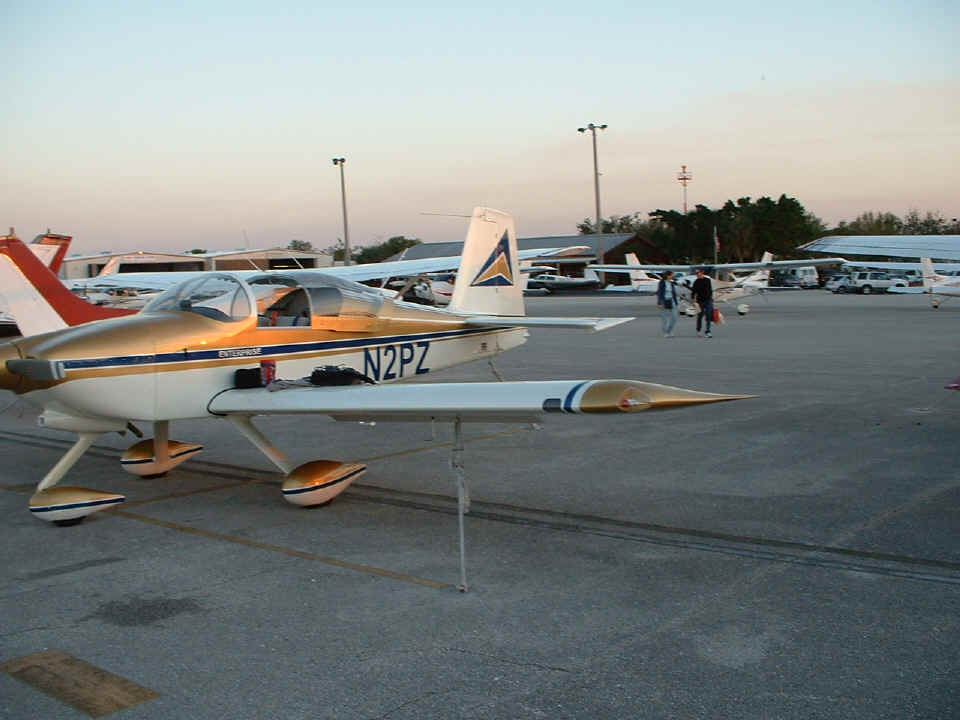 This last shot of the day shows my old flight school in the background - - Kemper Aviation.  They are located in the building behind the Philips 66 sign where the yellow FLIGHT SCHOOL sign is over the door to the office. 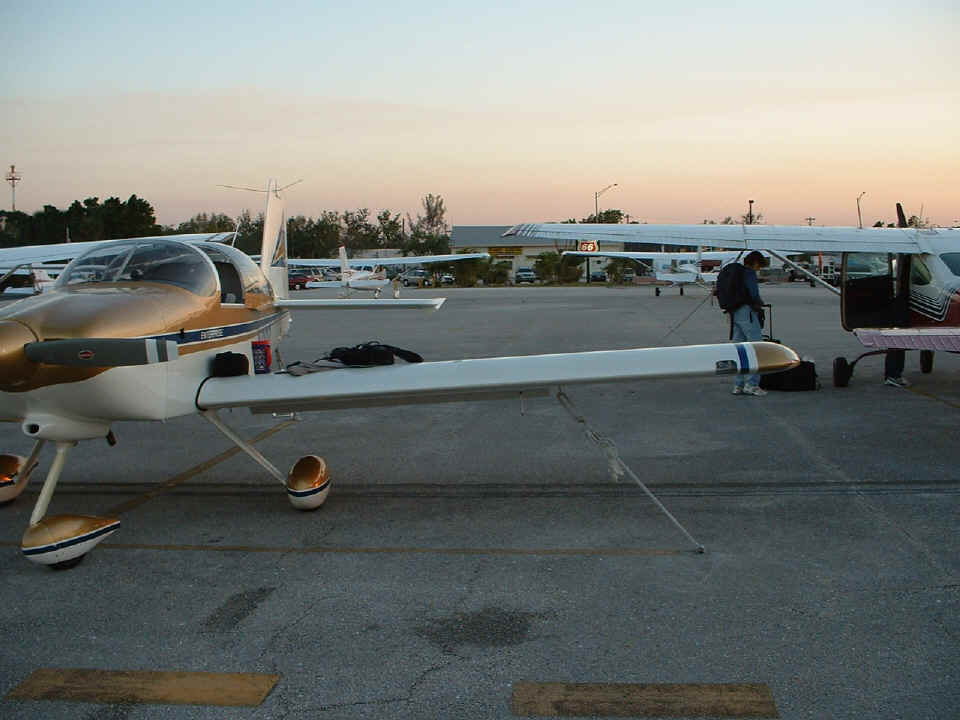 The total flight time from the Collegedale Airport to Stuart was 3.6 hours on the Hobbs meter.  Another 0.5 hours took me from Stuart to Lantana.  The flights from Stuart to La Belle and back to Stuart with Monte aboard took a total of 1.5 hours.   I finally got Monte to take the stick for part of the flight from La Belle back to Stuart.  He could not believe how sensitive the controls were to his inputs.   Monte flew a Stearman in his younger days, but is just starting to get back into flying in the past year.  He suffered from cataracts for many years.  His recent eye surgeries have put the color back in his life and his desire to fly again, now that his vision is restored.

January 2, 2006:  I have been doing some "local" cross-country flying down in South Florida with friends.   Today it is with Eddy Fernandez, who is listed in my OTHER RV section of this web site.  Eddy came up to the Lantana Airport to meet me for a short flight today.  He also invited Fabian Lefler and his son Burt to stop by and see the airplane.  Fabian lives about five miles from the Lantana Airport and is the owner of Affordable Panels, a company that produces modular instrument panels and other components for experimental airplanes.   Eddy (in the cap and sunglasses) and I took off shortly after this photo was taken for a short ride up to a private grass strip called Treasure Coast Airpark (FL37) about 50 miles north of the Lantana Airport.  We went there to meet another RV-9A builder and pilot, Bernie Kerr.   You can see the 10 photos of that visit in the OTHER RV section on a new page created for Bernie. 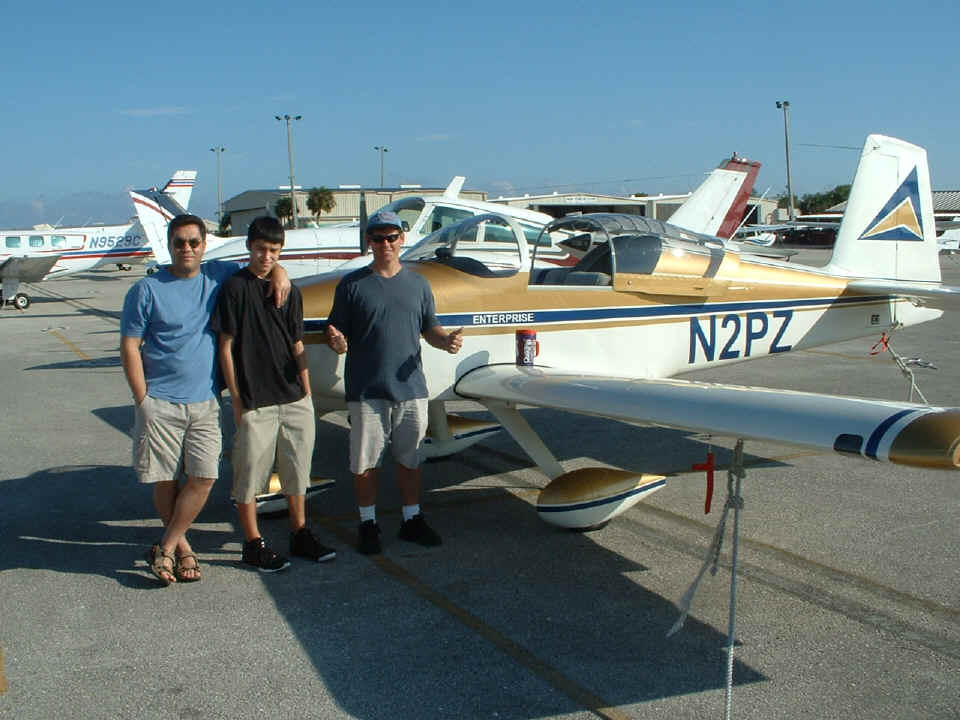 January 3, 2006:  The weather in South Florida is miserable today for flying, so I am updating this web site via dialup internet access.  The winds aloft are in the 25-knot to 50-knot range against me!  The weather for tomorrow is looking much better with lower headwinds.  I may be flying low to avoid them and to do some sight seeing on the way north.  I will let you know what happens when I get home tomorrow night and get a chance to post updates to this web site.