November 13, 2005:  This day started out with another pilot being introduced to the "RV Grin" from flying a Van's Aircraft.   It all started on Saturday at the party at my friend's house.  Some of the guests were also RC model pilots as I was when I first met our host, Don Muddiman.   One of the other guests is a student airplane pilot as well as being an RC-airplane builder/pilot.  I had been working on my computer as the party began.   When my friend introduced me to Darren, he mentioned that I built an airplane.   Since I had the computer open, I let him see some of the details of building the airplane and gave him one of my airplane business cards with the web site link on it.   About mid-way through the party, Darren announced that he had to get home early and departed.  It was not until the next morning when he arrived at the airport to see N2PZ that he mentioned why he wanted to leave the party early.  He had gone home to browse this web site for about an hour and a half.  His wife looked over his shoulder during that time and asked what he was doing and realized his life had made a new turn - - building a full-sized airplane instead of an RC model.

Here are a few pictures taken at the Kissimmee Airport as I packed up for departure.  The photo below shows Don Muddiman, the guy who taught me how to fly radio-controlled airplanes back in 1978.   He is the best aerobatic RC-pilot I have ever known.  He gets invitations to various RC fly-ins to entertain the crowd and the participants with his aerial feats with his RC-airplane. 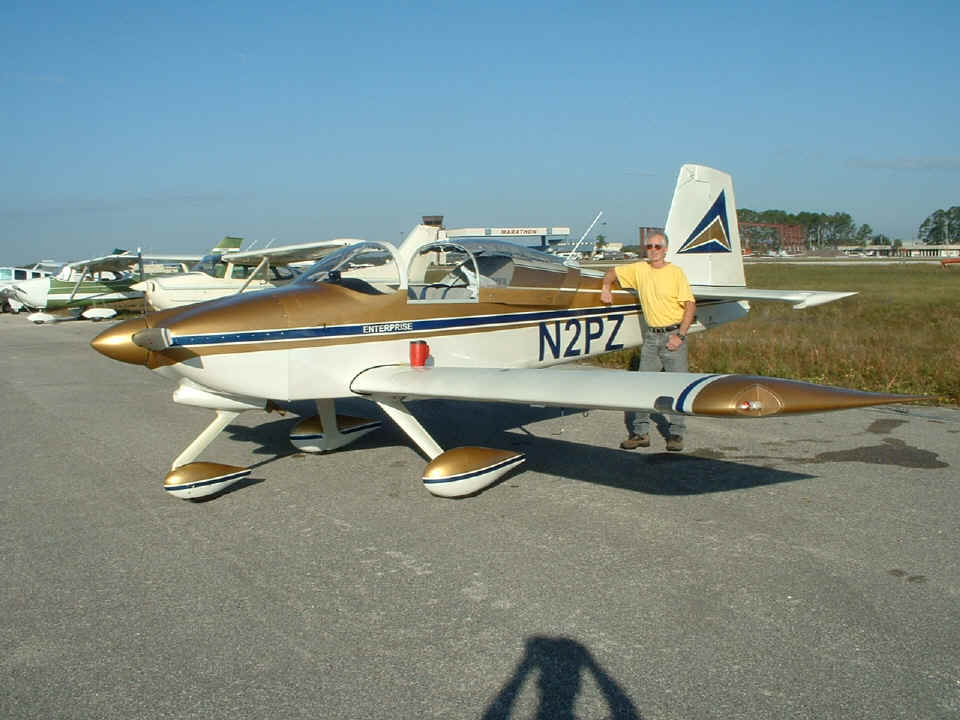 Darren also posed for me to show him with my airplane.  I loaned him my other baseball cap for the flight.  There is some new construction in the background at the Kissimmee Airport. 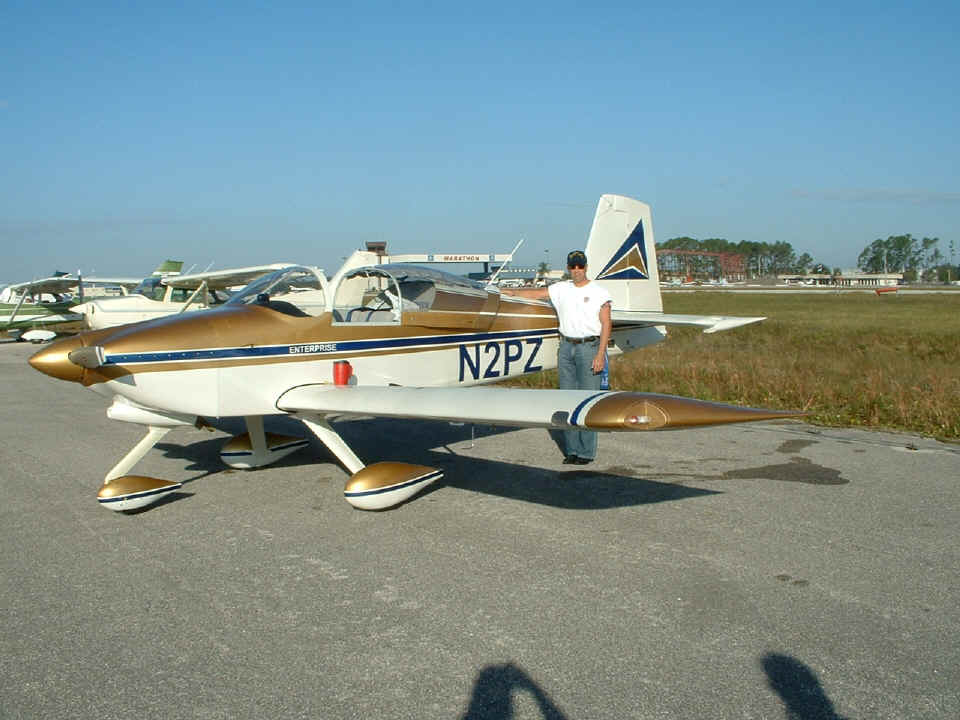 Don insisted that I be in the next photo with Darren. 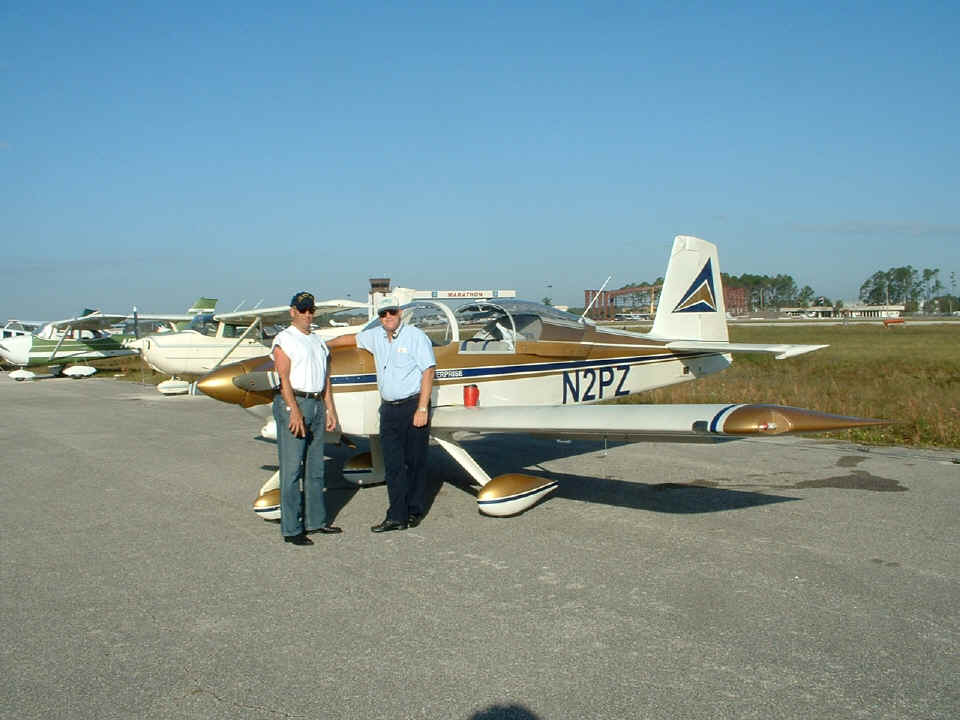 Don wanted to get this picture just before engine start on my demo flight with Darren. 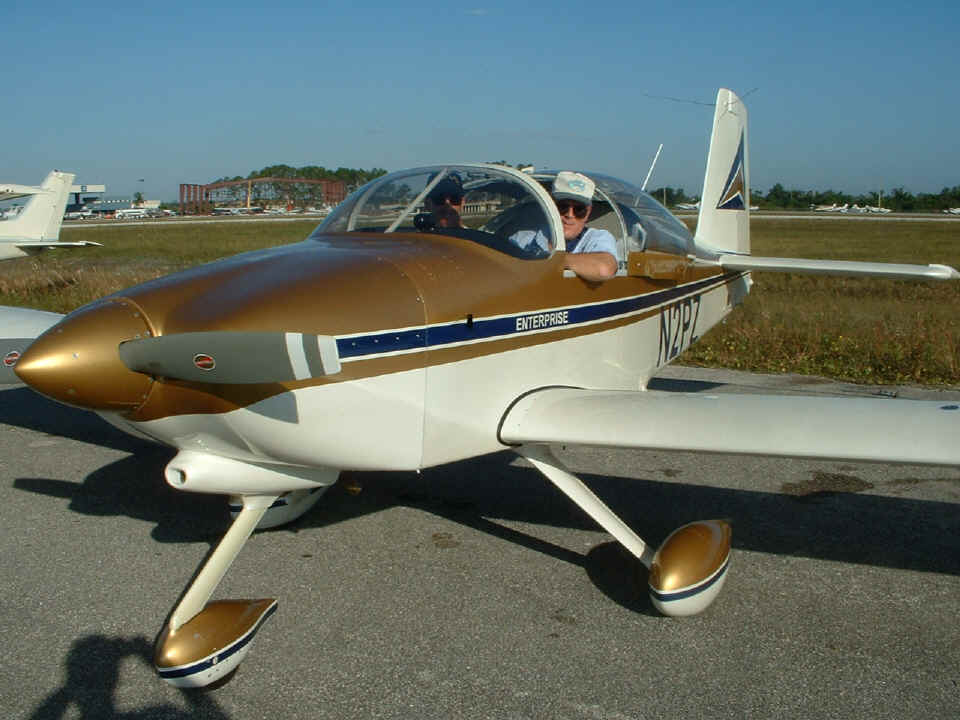 Here is a map of the ground track from the demo flight with Darren in the area west of the Kissimmee Airport.  Due to the TFR over Walt Disney World, the approach and departure from the airport is well to the south of the theme park area.   Orlando's Class B airspace ends at US 27 and a practice area for student pilots is out there.  After we were west of US 27, I had Darren to climb the airplane while I was explaining to him how the engine monitor dictates power settings, RPM via propeller control, and manifold pressure via the throttle.  It was his first ride in anything other than Cessna training aircraft.  He quickly began to see the relationship in climb angle, airspeed, and engine operating temperatures.  When we reached 6,500 feet MSL and leveled off just East of Eva in the map below, he had a chance to see what smooth air was all about.  The airplane reached the normal cruising speed of 180 MPH true airspeed at that altitude when the engine was set to 2,300 RPM and 23 inches of manifold pressure. 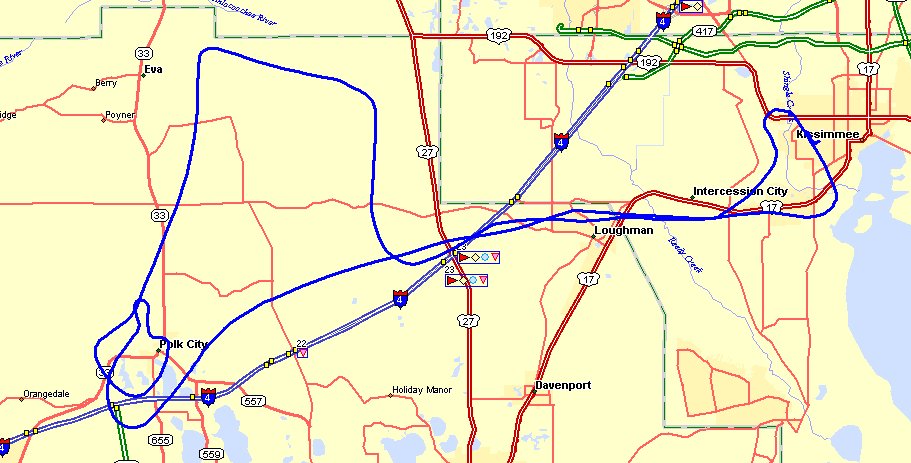 When we got down to the Polk City area, I slowed the airspeed down under 80 MPH and we flew a couple of clean stalls, then a couple with full flaps extended.  After those were done.  I made a rapid circling decent and we flew down the long grass strip at the Kermit Weeks Air Museum adjacent to Interstate highway 4.  We were doing just over 190 MPH at 500 feet above the runway.  He had now seen the RV-9A go through its full range of flight performance. 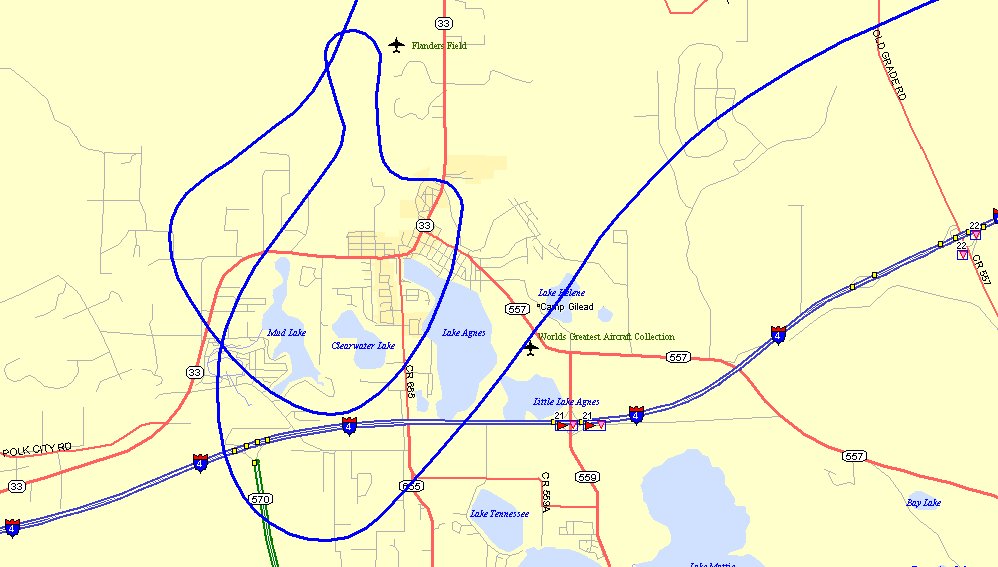 After Darren and I said our good-byes back at Kissimmee Aviation, I headed for home with a 9:50 AM departure from KISM.   I contacted Orlando Class B controllers when I cleared the Kissimmee Class D airspace and climbed out on course toward Ocala.  The photo below is taken just south of Leesburg, Florida from 10,500 feet MSL.  The highway running from the left-center of the photo toward the top is the Florida Turnpike.  US 27 is the highway running from the bottom left corner to the right side center of the picture.  There has been considerable growth in this area in the past ten years.  A new interchange has been added to the turnpike as a result of the growth.  The lake at the far right edge of the photo is Lake Harris just south of Leesburg.  This is the view on the LEFT side of the airplane. 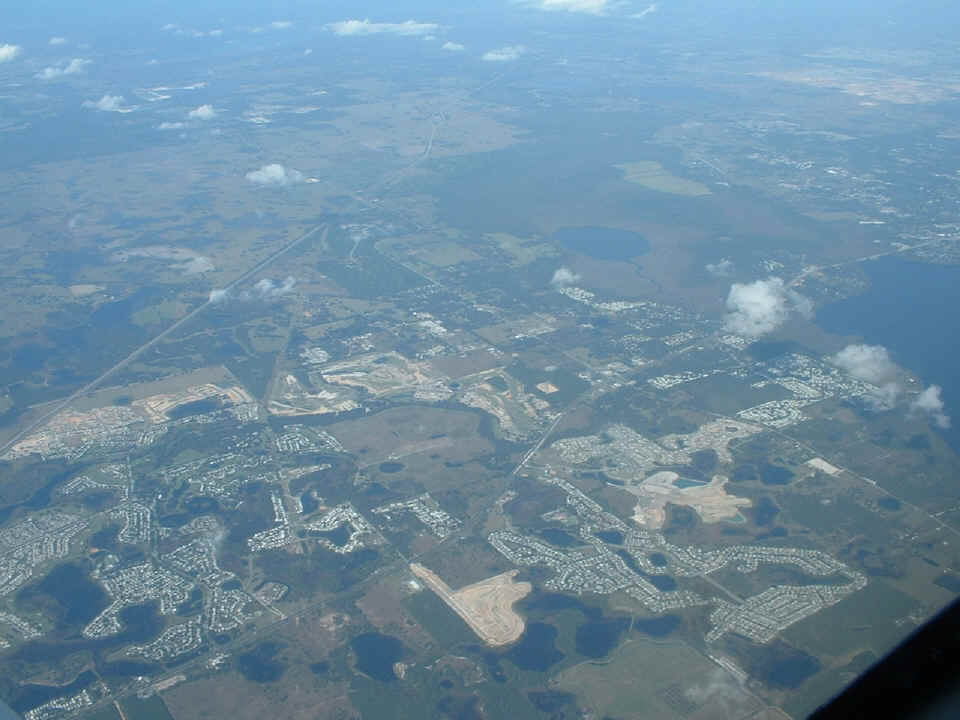 Looking out the RIGHT side reveals this view with the eastern half of Lake Harris under the airplane.  US 441 is the highway seen from the left center of the photo at the north shore of Lake Harris.  Lake Eustis is the lake near the center of the photo with the town of Tavares on the southern shore of Lake Eustis.  The highway that meets US 441 at Tavares is Florida route 19 coming from the south under my wing.   The lake at the right side of the photo is Lake Dora.  The other interesting thing about this photo is the cloud cover over the eastern half of the Florida peninsula.   That cloud cover is similar to what I had seen covering Florida on my trip south this past Friday. 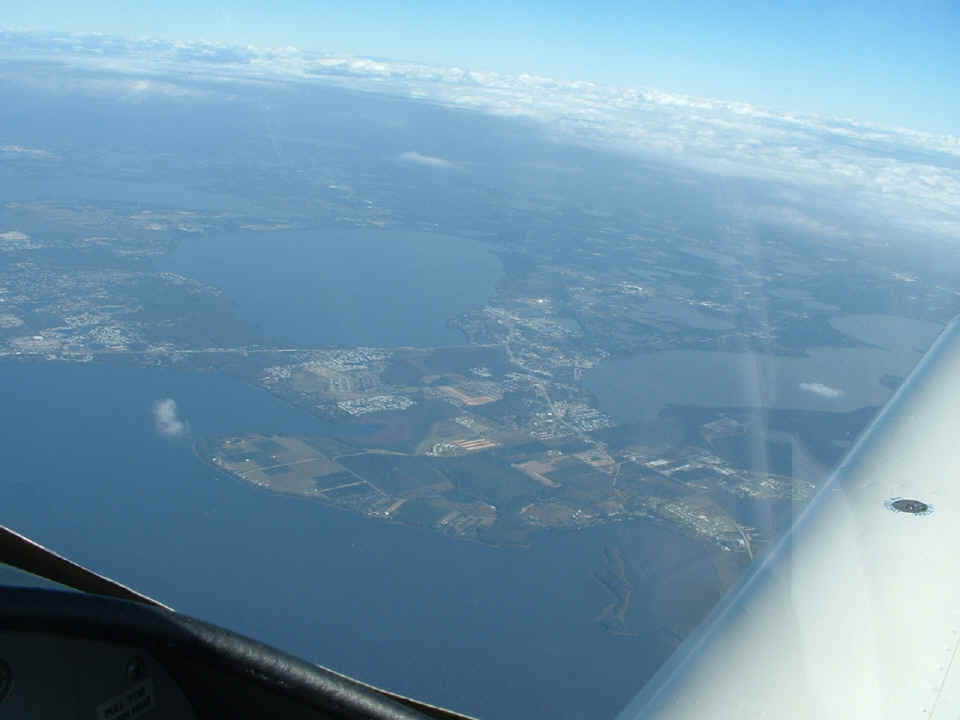 It was at about the same time that I took this photo that I was alerted to two inbound airliners to the Orlando area.  An MD-90 and a Boeing 767 were heading southeast at 11,000 feet MSL as I headed northwest at 10,500 on a parallel course about five miles from both of them.  I have more about the trip home on the next page.