October 30, 2005:  The second day of the air show was not much different from yesterday.  I did remember to pack a lunch today.   You can find plenty of pictures of the the Blue Angels on the web, so I did not try to capture them in flight here.  That line of porta-potties in the background is just across taxiway Charlie.  From the other side of those to a point near the main runway, there are food vendors, and plenty of spectators lined up to see the various air show performers. 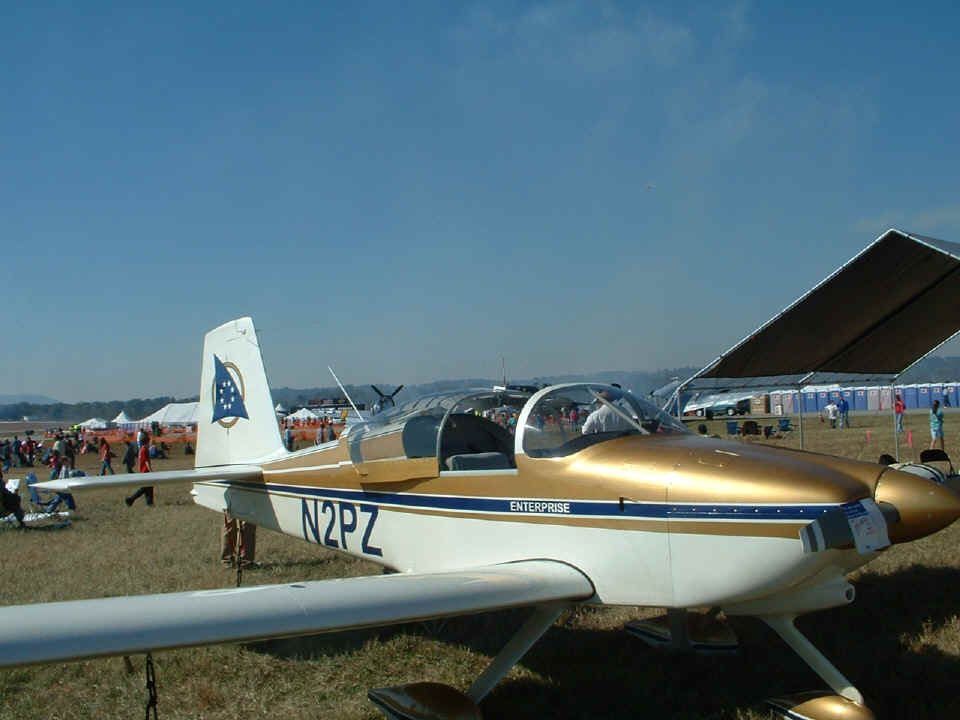 At the end of the air show, the crowd was heading for the exits and the EAA chapter 150 group was dismantling the booth and preparing for departure from the air show grounds.  The guy in the green shirt and suspenders is chapter President Steve Balding. 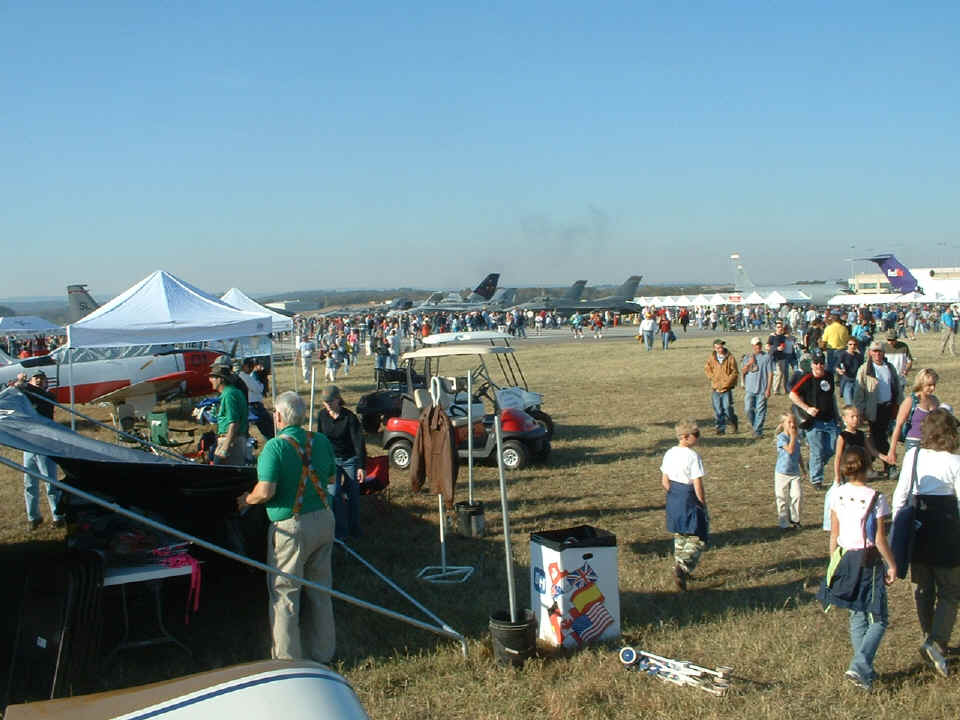 I was standing on my right wing walk taking these pictures as the crowd was moving to the shuttle bus parking area south of my location. 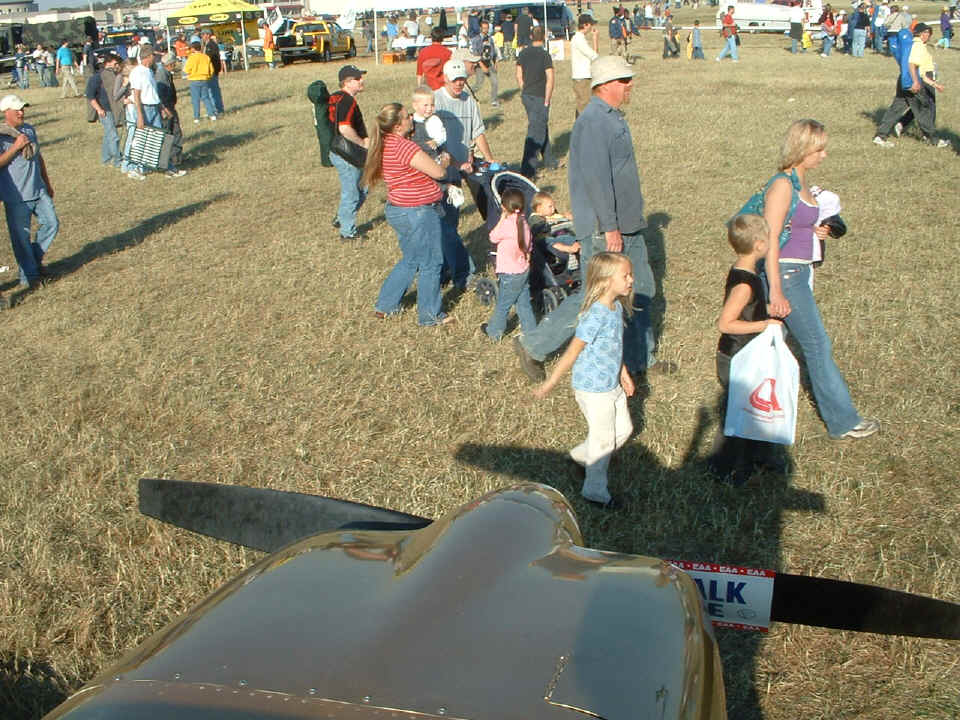 The shuttle buses are visible in the distance beyond the crowd and the two Civil Air Patrol airplanes which were parked next to my airplane. 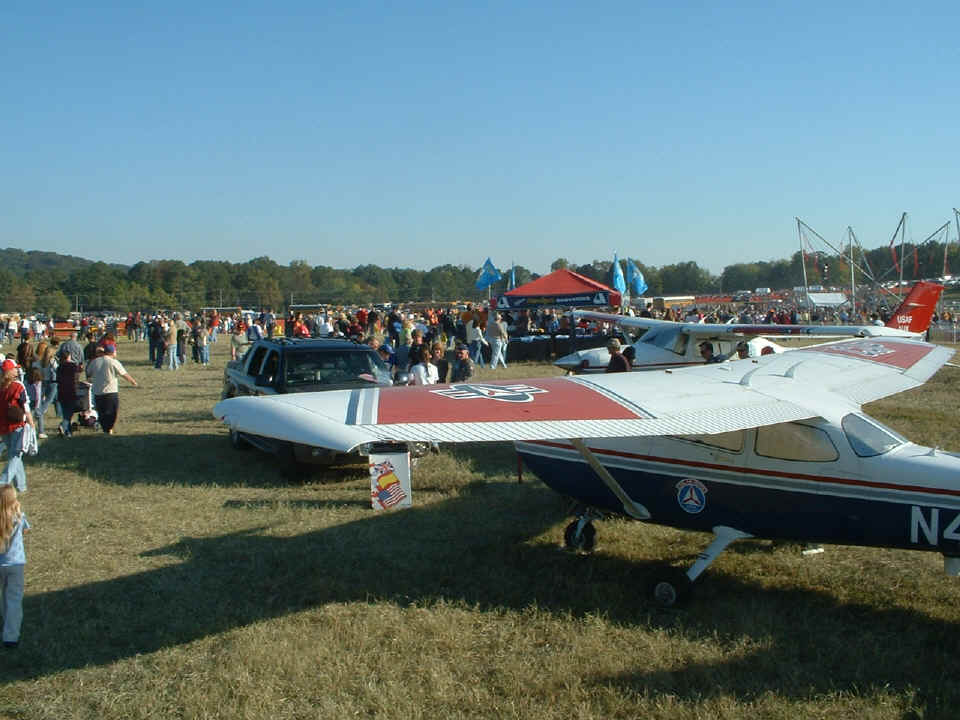 A playground for children was also setup to keep some of them busy who were not especially interested in airplanes and helicopters. 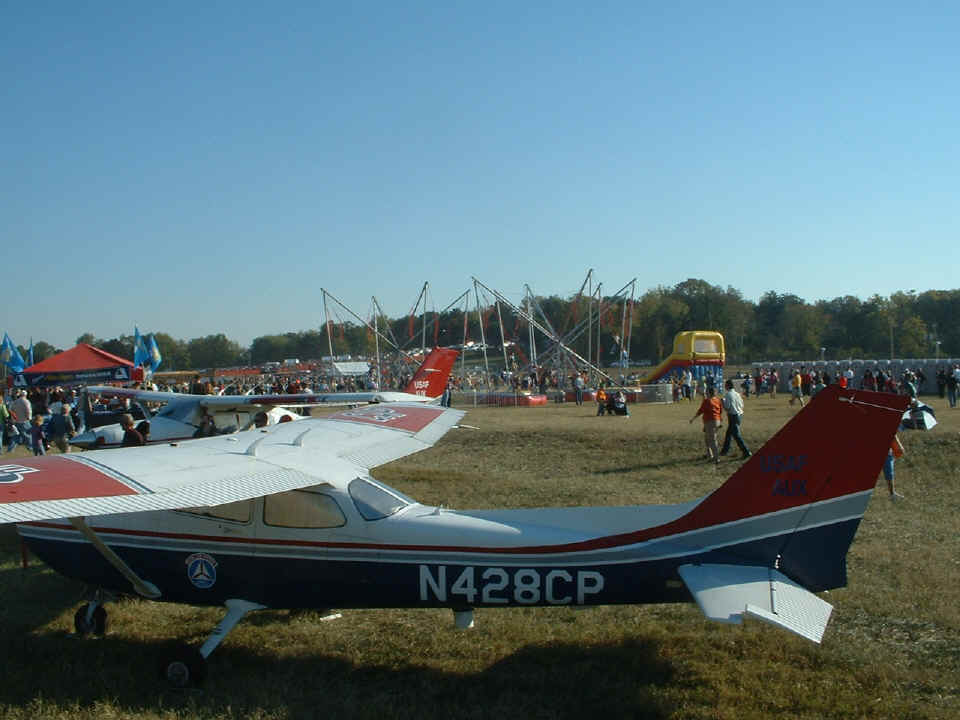 EAA Chapter 150 members get the canvas roof of the "tent" folded and ready for transport.  The war birds and the twin Beech are also getting prepared for departure.  No planes will be allowed to start engines and taxi away from the show area until after 4:30 PM. 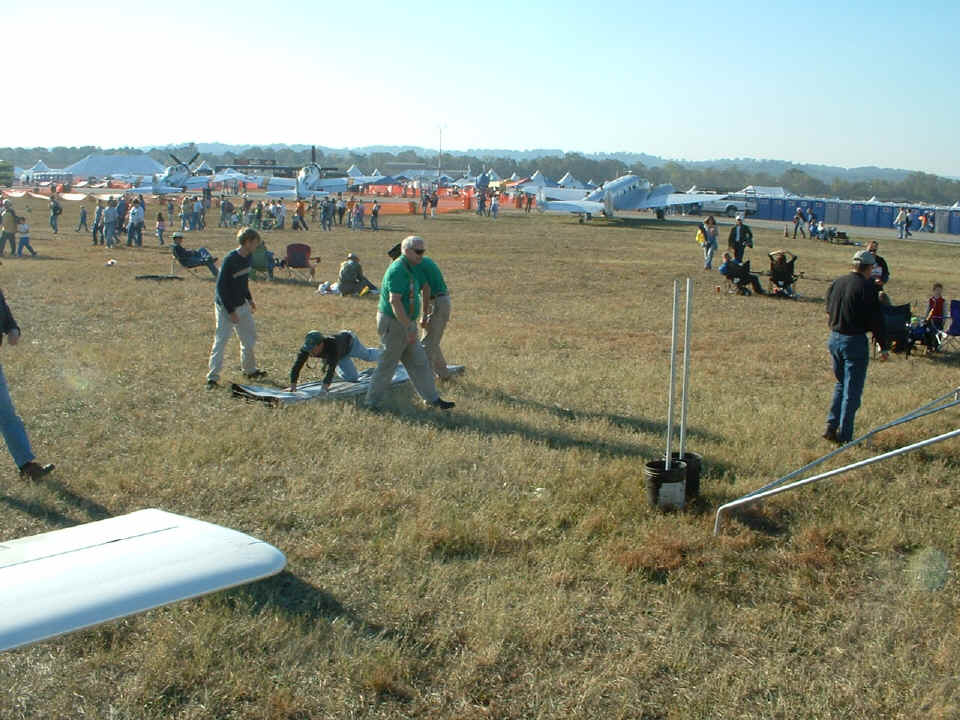 The tubing sections and joints from the overhead frame of the "tent" are ready for disassembly. 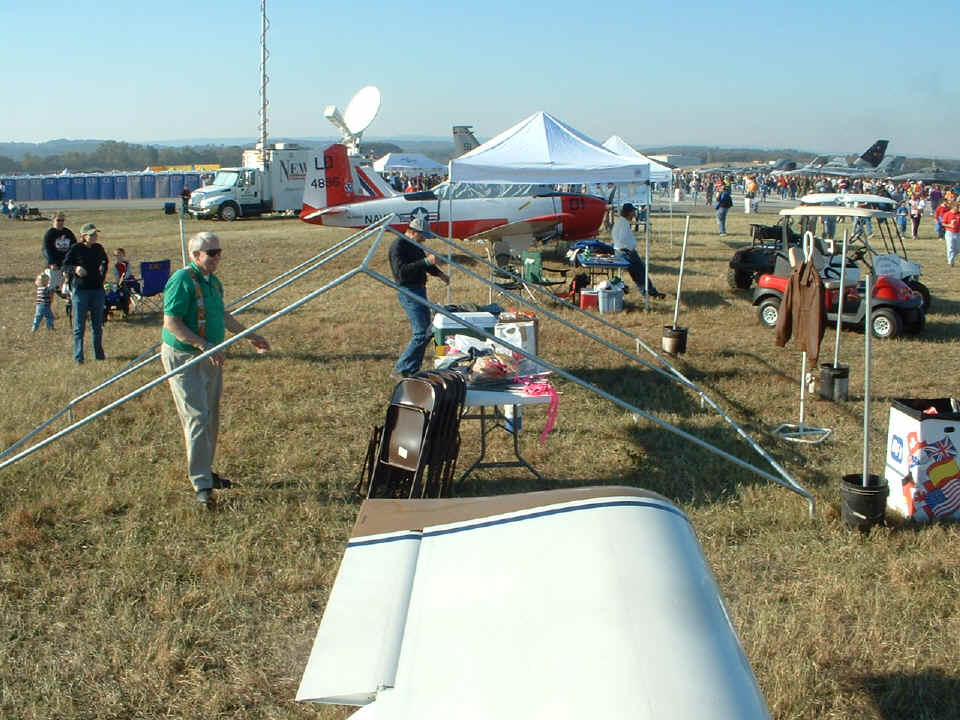 The last young visitor of the day to stop by with his dad wanted to get his picture taken and posted here.  His dad is a recently retired airline pilot and may be looking for a new hobby.  He has been flying Airbus A340 air liners and was not sure he could fly a small airplane any more.  I reassured him that RV's are flown by a number of airline pilots and military pilots, both active and retired. 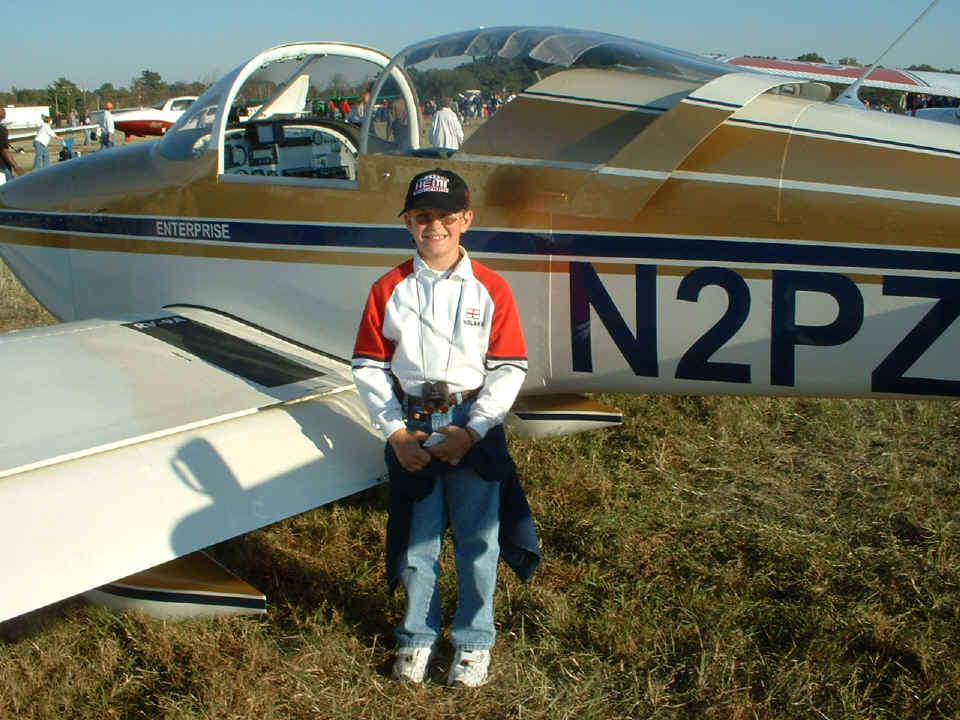 Right after this picture was taken, I pulled up my anchors, put them away inside the airplane, and prepared for departure after the Air Show was closed and most spectators had departed the site.  The ground crew from TacAir were walking the airplanes out with engines running as 5 PM approached.  I was lucky enough to get out and on my way home with time to spare before sundown.  Since this was the FIRST DAY of Eastern STANDARD Time, sundown would occur before 6 PM today.  Enterprise is back at home at Folks Field with another 0.3 hours added to the Hobbs meter for a total of 124.6 hours.  I had time to clean off the bugs from the wings and tail.  I will clean the plexiglass windshield and canopy tomorrow.  It is time to finish working on the brake lines at the master cylinders to eliminate the brake fluid seepage.

November 2, 2005: I went out to the hangar today and cleaned up the brake fluid seepage on the bottom of the master cylinders.  I checked the brake line connectors to the right-angle fittings and they are secured.  The problem is as I thought, the right-angle fittings on the bottom of the cylinders need to be turned another 360 degrees if possible.  They have pipe threads and they seal by compression during the tightening of the connectors.  Doing that may not be easy or even possible.  It is a job that will require me to remove the carpet and the foam pads from the front floor boards of the airplane.  I talked with David Edgemon about this last night and he confirms he is having the same problem, along with some other RV-builders/owners.

I also called Van's Aircraft technical helpline to discuss the issue and was reminded that the sealing compound on the pipe threads is really just there to lubricate the threads when they are being tightened (crushed).

Oh, there is some good news to report!  I have been checking on AVGAS prices online and find that some airports are showing lower prices in Texas and Florida at selected locations.  There may be a trip down to Florida on my schedule in the coming weeks.  A friend in the Orlando area has invited me down for a weekend party and I may just take him up on it.

I also got an email late this evening from the EAA 150 chapter president about a local boy scout group that wants to fly in the Young Eagles program.  It sounds like I will get a chance to give the forces of flight lecture again, and provide some stick time for more young people.  I will keep you posted when my next Young Eagles flying day approaches.