October 15, 2005:  More photos from the social hour and banquet at LOE5.  A few of these folks are from the Dallas-Fort Worth area and were part of "Crash Flight" with Doug Reeves leading.   "Crash" is the handle they have hung on Doug. 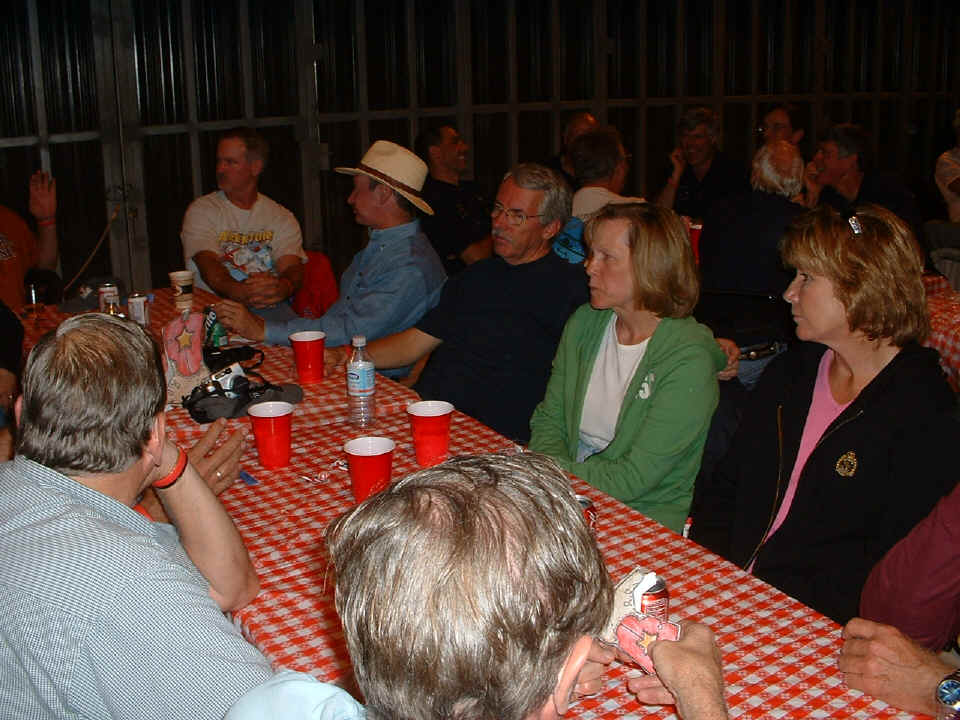 By the time I took this shot, you can tell folks are fully engaged in conversations and having a good time sharing flying stories. 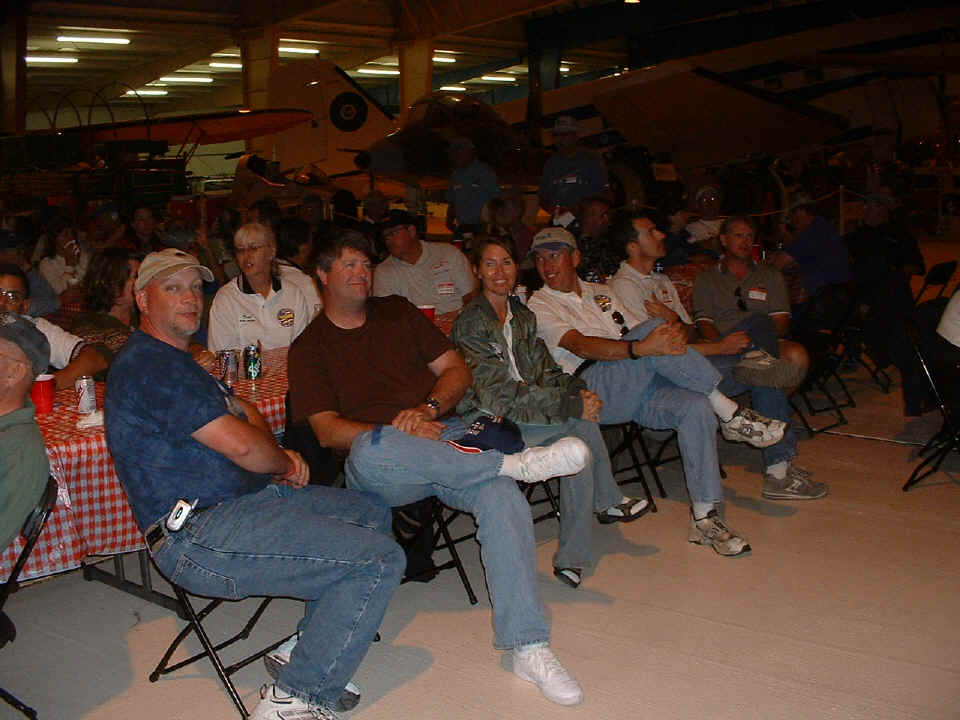 By the smile on Gary P. Zilik's face, the conversation is either good, or he is smiling for the camera.  Gary is from Colorado and flies an RV-6A with the registration number N99PZ.  If he and I were to be flying in the same area, the controllers would have to be careful on the radio since both our call signs would end with the words "PAPA ZULU" for each radio transmission. 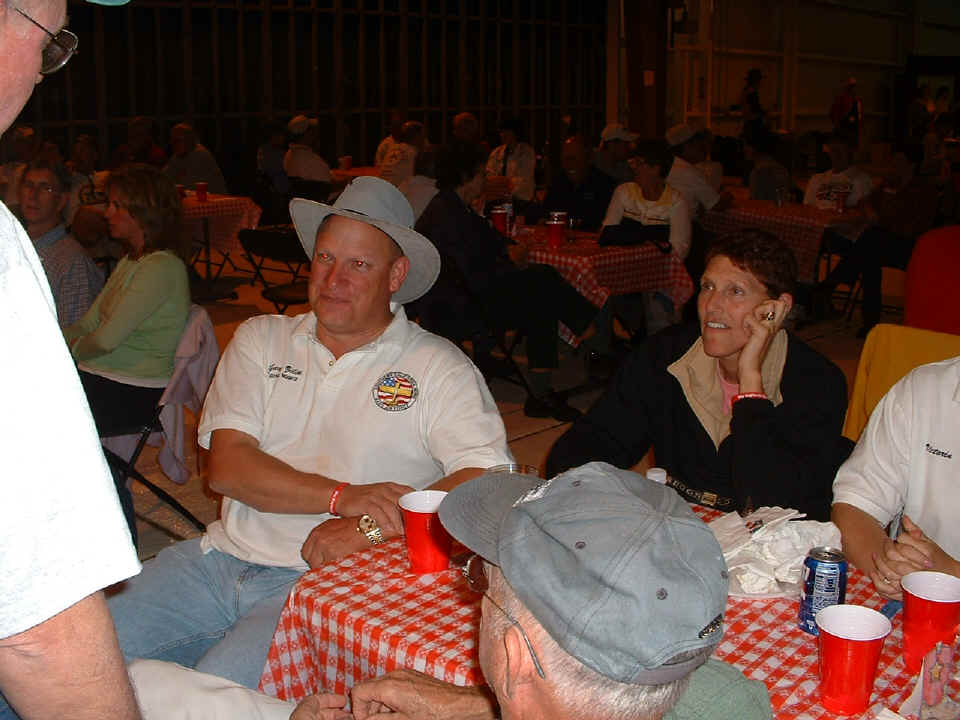 Paul and Victoria Rosales strike a pose for the camera without hesitation! 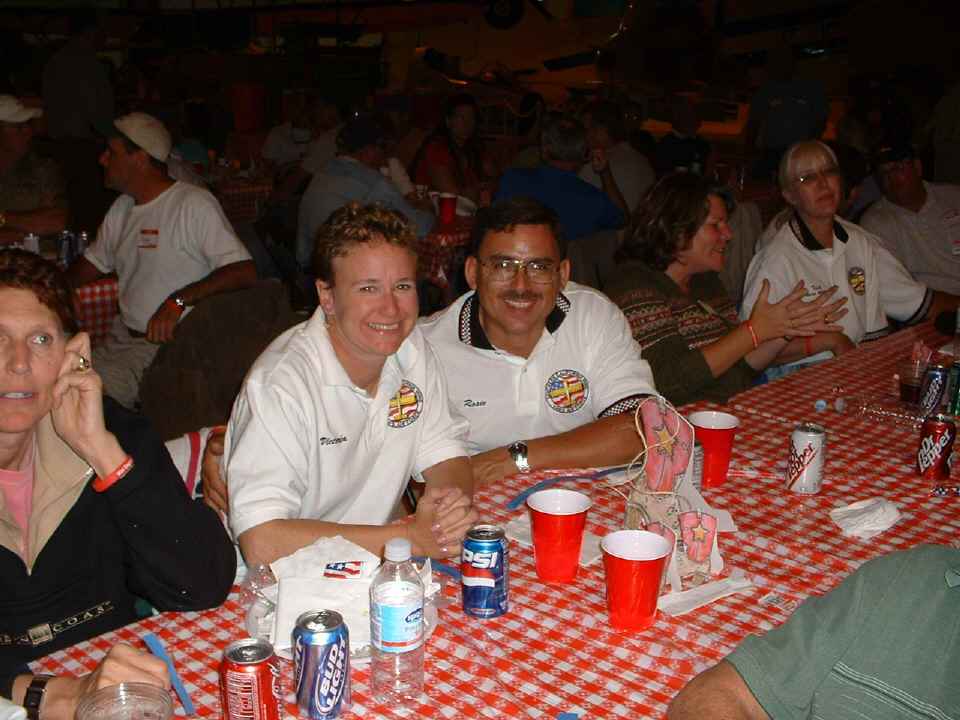 From my location near the back, this photo shows the approximate size of the crowd.  There were 116 RV-airplanes registered for the LOE5 fly-in and around 200 attendees for this event. 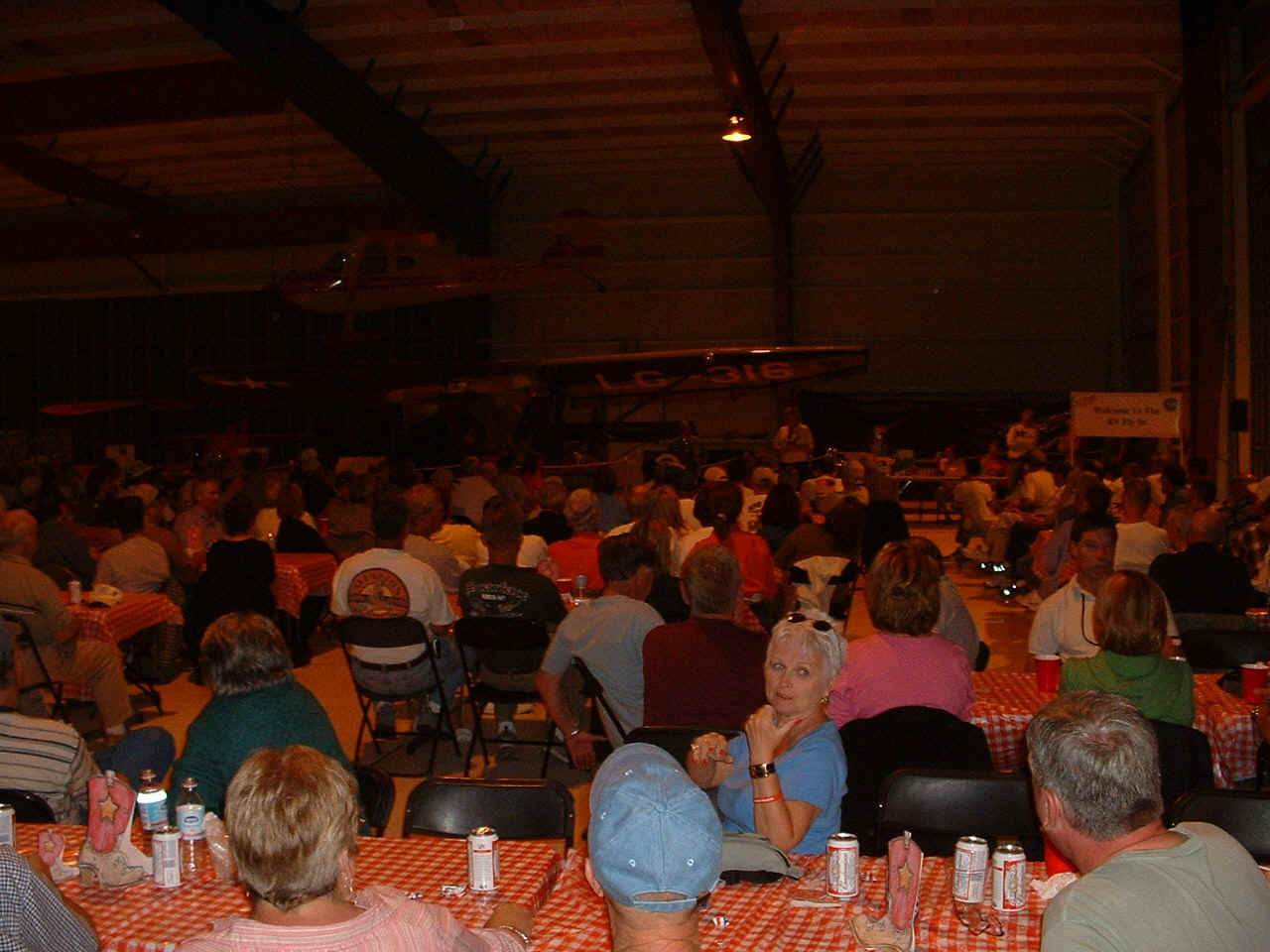 Right after the photo above was taken, dinner was served and the banquet got started.  After that, the organizers of the event were recognized for their contributions and it was announced the event would be held at Dona Ana airport again next year.  Larry Pardue has posted his photos and a story about his experience at LOE5.  I was cleaning up my airplane on Saturday when he came by as one of the judges.  I did not know at that time that he was one of the judges.

October 16, 2005:  A number of us stayed at the Microtel West near Interstate 10 exit number 8 on the frontage road.  I had just packed my bags into the Jeep rental car I had and snapped this photo before heading to the Dona Ana Airport.  The weather was beautiful in the Rio Grande Valley this Sunday morning. 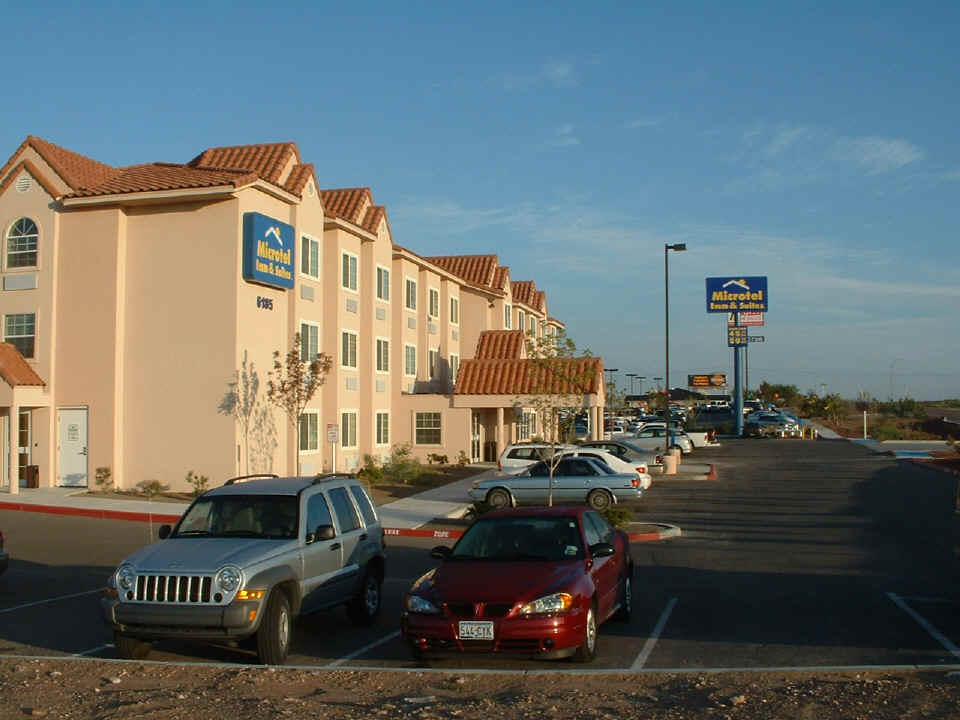 The airport hangars are just visible along with a row of buildings at the adjacent business park just north of the US-Mexican border.  They appear as the little "white streak" at the center of the photo on the horizon about seven miles from this camera location on the new Pete Domenici state highway going from Interstate 10 to the border crossing.  On the Texas side of the state line, it is known as state route 178.  As the road crosses into New Mexico, it becomes state route 136.  It only has the Pete Domenici Memorial Highway designation on the New Mexico side. 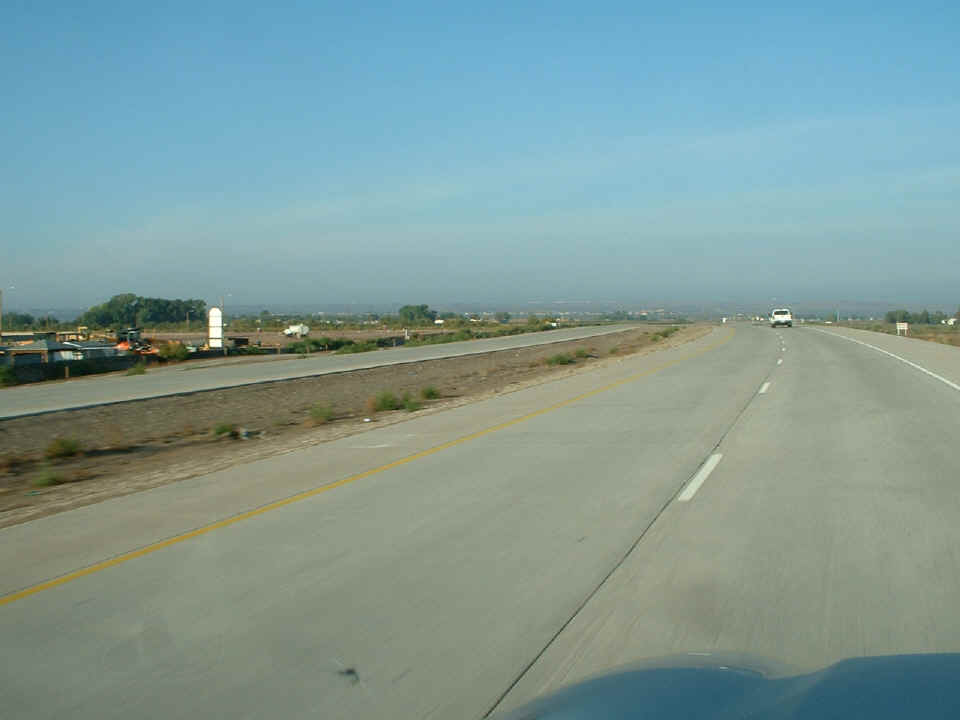 A layer of clouds hung low across the valley just East of Anthony Gap and the Franklin Mountains.  I could hear reports from other pilots on 122.75 MHz saying the clouds dissipated a few miles to the East.  It sure made an interesting photo of these volcanic peaks just to the north of US 62.  I remember seeing them from the highway when I drove out this way in 1978 and again a few years later. 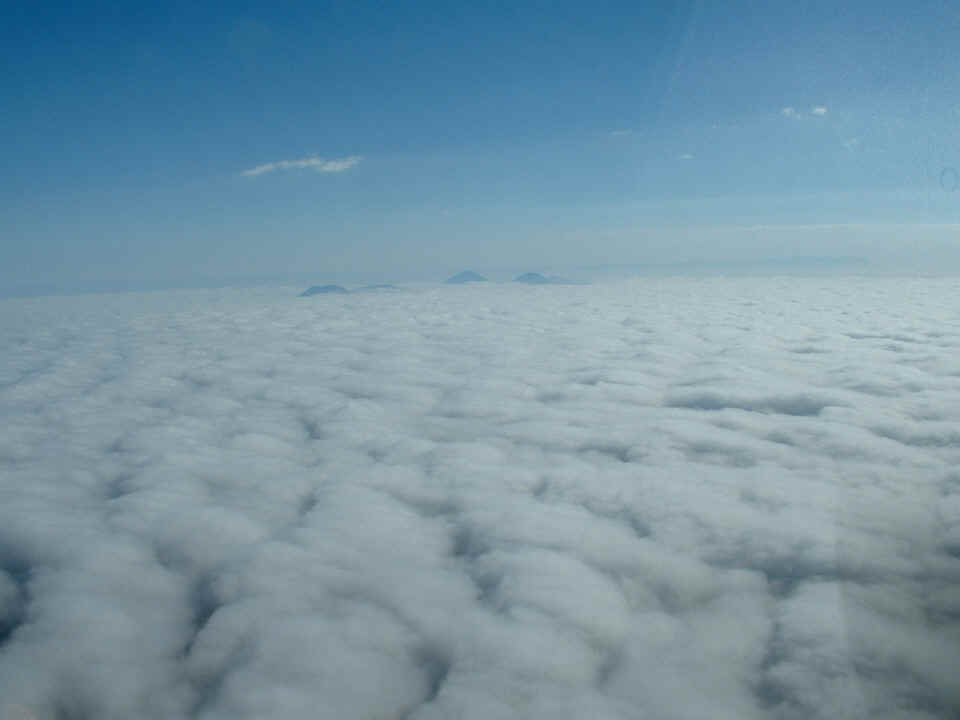