September 10, 2005:  This Saturday morning was after the first Friday afternoon and evening parties that were a part of my 40-year high school reunion weekend.   While some of my old classmates were out playing GOLF on Saturday, I took to the air and flew over the golf course to see where they were spending their morning.  I had three flights today.  The first one began at Folks Field and departed to the southeast to circle the Fields Ferry Golf Club where my friends were riding the golf carts and chasing the little white dimpled balls around the 18-hole course.  I continued up to my cousin's house and circled there a couple of times just west of Chatsworth, GA.  After that I flew over Dalton to take a picture of the downtown area today to compare with an old 1932 post card that is part of my collection.

Here is the view of the golf course looking south over my shoulder. 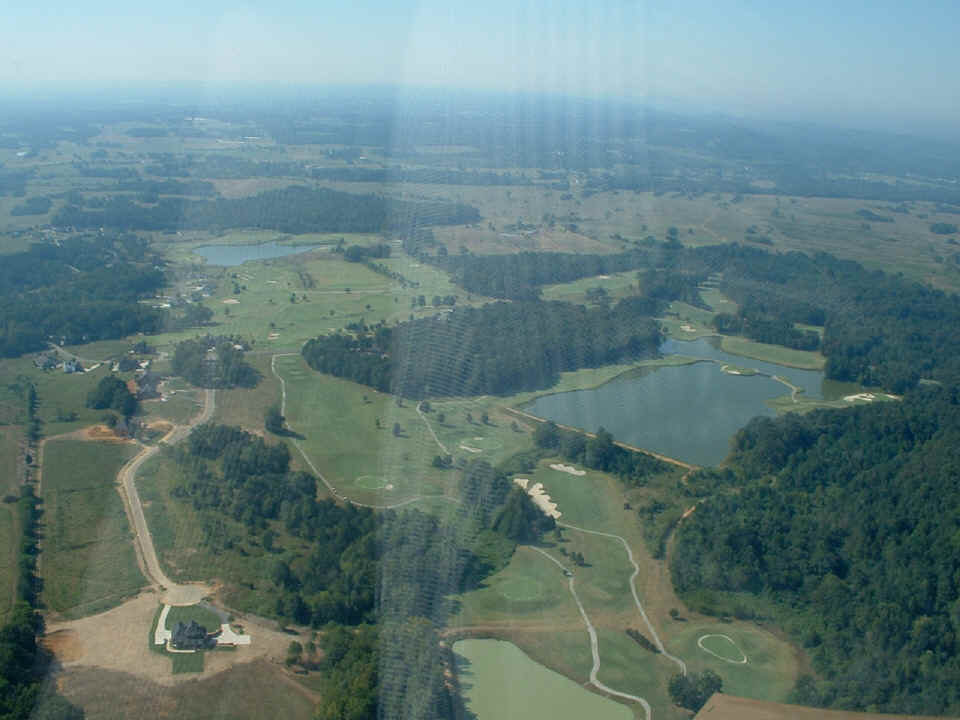 The photo below shows downtown Dalton in 2005 looking north.  The OLD US 41 highway (Thornton Avenue) is at the far left side of this picture just off the wing tip.  Those two bridges cross the railroad tracks that run through the middle of town.  Norfork Southern and CSX railroads interchange here in Dalton.  Norfolk Southern was just Southern Railway when I was a boy growing up here.  The line operated by CSX has been known as Louisville and Nashville Railroad (L&N) and Nashville, Chattanooga, and St. Louis ("N.C.& Saint L") before that.  The tracks and right of way used by CSX (and the others before) are actually owned by the State of Georgia and was originally built before the Civil War as the Western and Atlantic Railroad.  This was the route taken by the Union soldiers who stole the locomotive "General" in 1862 on an sabotage raid into the Confederacy known as "The Andrews Raid" or "The Great Locomotive Chase". 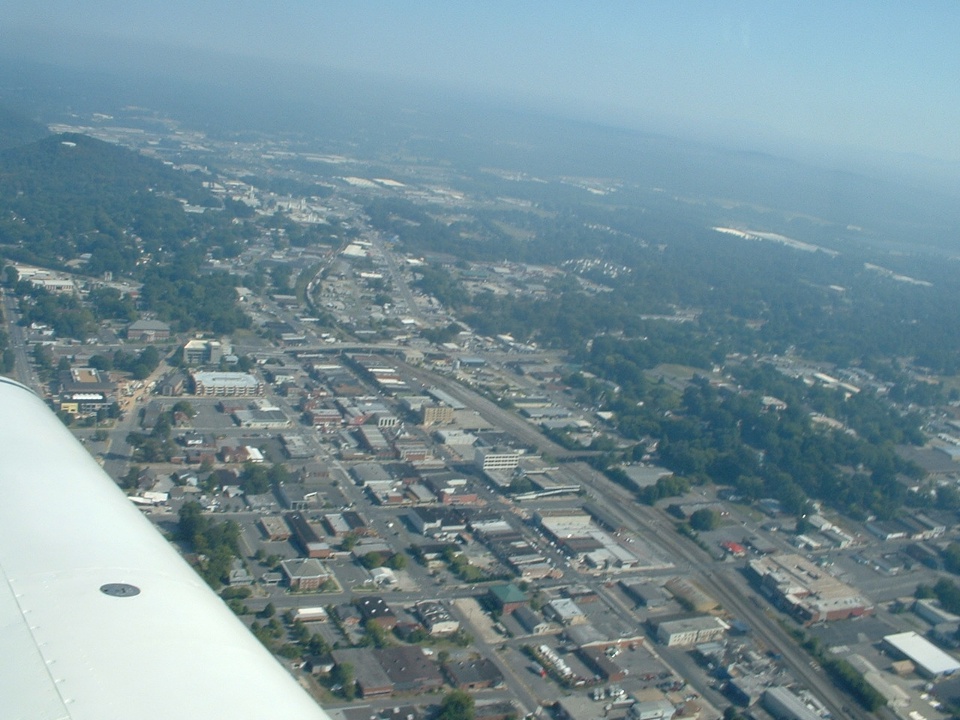 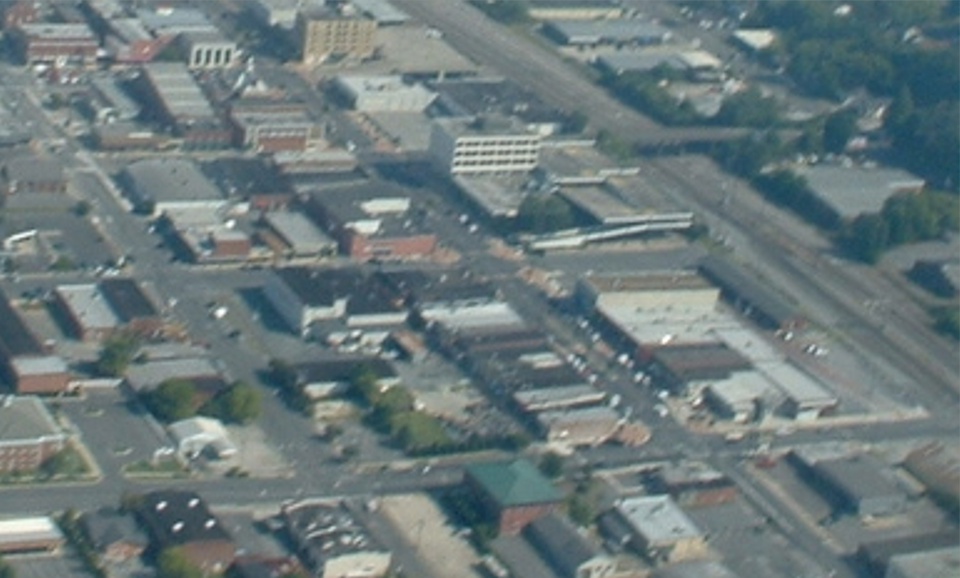 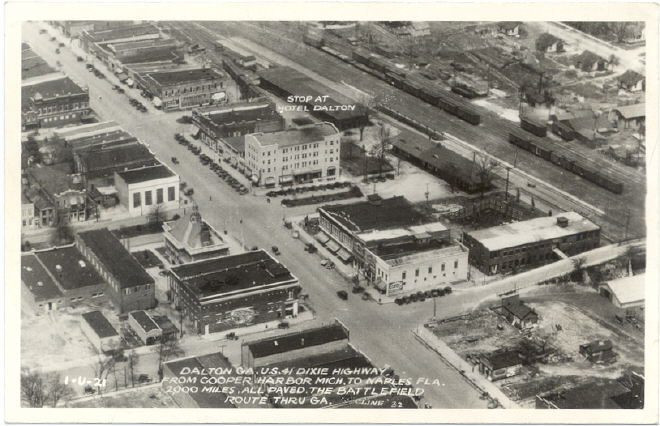 When the photo for the post card was taken in 1932, I would bet the airplane was much lower than the 1000 feet AGL that I was flying when I took my color pictures above.   I would bet the photographer Cline was shooting out of an open cockpit biplane flying at around 50 or 60 MPH instead of the 120 MPH during my pass over downtown Dalton.

After flying over Dalton, I headed for my home field, then heard a friend on the radio flying near the Collegedale Airport.  I diverted to Collegedale in order to meet him after his flight.  The old friend is Ray Johnson (shown on page 42), a former neighbor who helped me buck some rivets during the construction of Enterprise.  I had promised him a ride and today would be the day.  In my second flight of the day, I took Ray up to the practice area East of Collegedale, then back over my home base near Chickamauga, Georgia shown in the photo below. 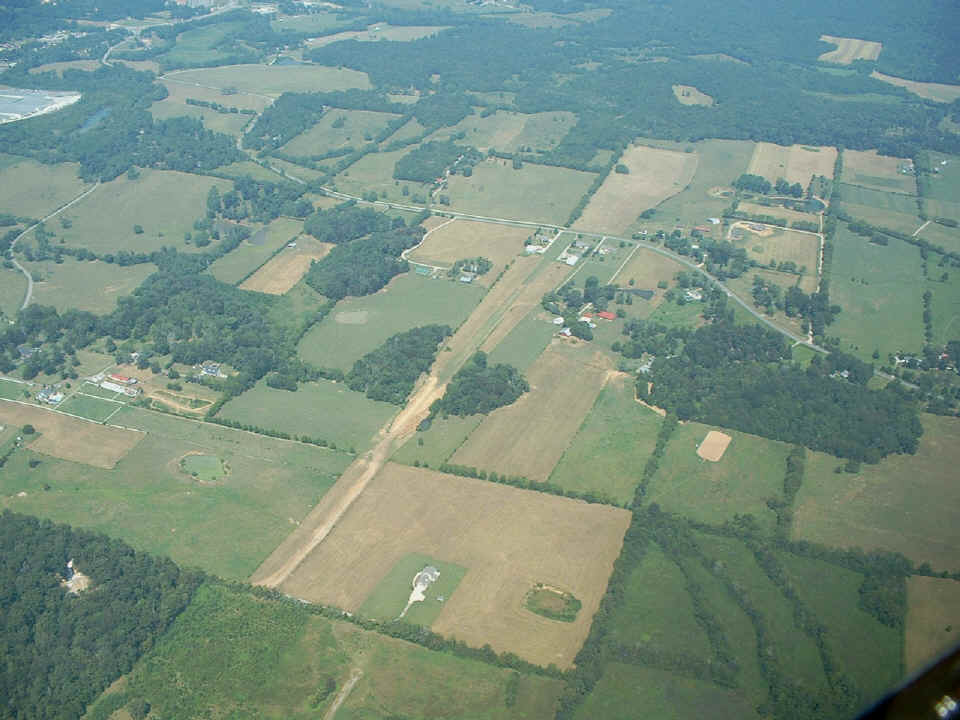 The hangars are near the north end of the field near the paved road and the homes.   There is 2000 feet of grass-covered runway from between the trees and the road at the north end.  There is another 540 feet of runway that is being improved by a local builder who wanted to give away some fill dirt and rocks from a sub-division that is just out of the picture from the bottom left corner.  The runway is aligned along 10 degrees and 190 degrees magnetic bearings.  My photo is taken from just southeast of the field.  I had Ray flying the airplane as I took this photo.

I gave Ray a chance to get the feel of the airplane when climbing at the beginning of the flight, at 180 MPH cruise, and a chance to do some power-off stalls in the descent from 8,500 MSL.  We did a fly-by at Folks Field after taking the photo above and before going up to MORRT Intersection to test my 75 MHz marker beacon receiver.   I was already in contact with Chattanooga Approach and there was no problem with the test as far as they were concerned.  They were landing from the north and departing to the south at the time I flew over MORRT, the middle marker location on the ILS approach for runway 2 at Chattanooga (KCHA).  I stayed down low in case they had any departing traffic.  MORRT is five miles south of the Chattanooga Airport.

After taking Ray back to Collegedale to get his car, I topped off the fuel tanks and made the short flight back to Folks Field.  ( October 19, 2005: Ray emailed me some pictures he took that day and I have posted them on PAGE 169A. )  The three flight segments for today totalled 2.0 hours of Hobbs time on the airplane, which now has 94.3 hours on the Hobbs meter.  Two of the three landings were at the Collegedale Airport.  The turf landing back at Folks Field was a "greaser" from the south touching down on the grass just beyond the fill dirt.  I usually stop right before reaching the hangar in the warm weather of summer.

September 13, 2005:  I took out the main instrument panel this morning and removed the Navaid Devices wing leveler controller.  When I got over to their shop in North Chattanooga, Horace opened the case and quickly discovered the gyro motor had died.  It did not take long to put in a replacement gyro and get it balanced.  He has 10 years of experience with this design and had it working in short order.  I got a chance to put it back in my panel after lunch and it started up and centered the LED bar graph as it should.  I will get a chance to try it out this coming Saturday, September 17th when I fly up to the RV fly-in at Lebanon, Tennessee (M54).

I also had time to check out the intermittent fuel sender from the right wing tank.  It appears that my center conductor was not secured in that BNC connector that I put on the wires from the EI unit.  I had peeled back the wing root fairing and saw the wire was holding the BNC center pin a little bit back from its proper position inside the male connector.   After re-shaping the wires, I plugged the BNC male connector onto the female connector on the end of the fuel tank, then checked for proper operation of the gauge.  After that, I put on a liberal coating of clear RTV silicone to secure the wires to the male BNC connector and let it cure overnight.  The BNC connector has some of the paint overspray on it from the paint shop.  The black wire is soldered to ground.  The white wire is soldered to the gold plated center pin inside the connector.  The miniature circuit board that performs the capacitance-to-voltage conversion for the fuel gauge is sealed inside the heat shrink at the end of the black and white wires coming from the BNC connector.  The RED, WHITE, and BLACK wires go inside to the fuel gauge on the instrument panel. 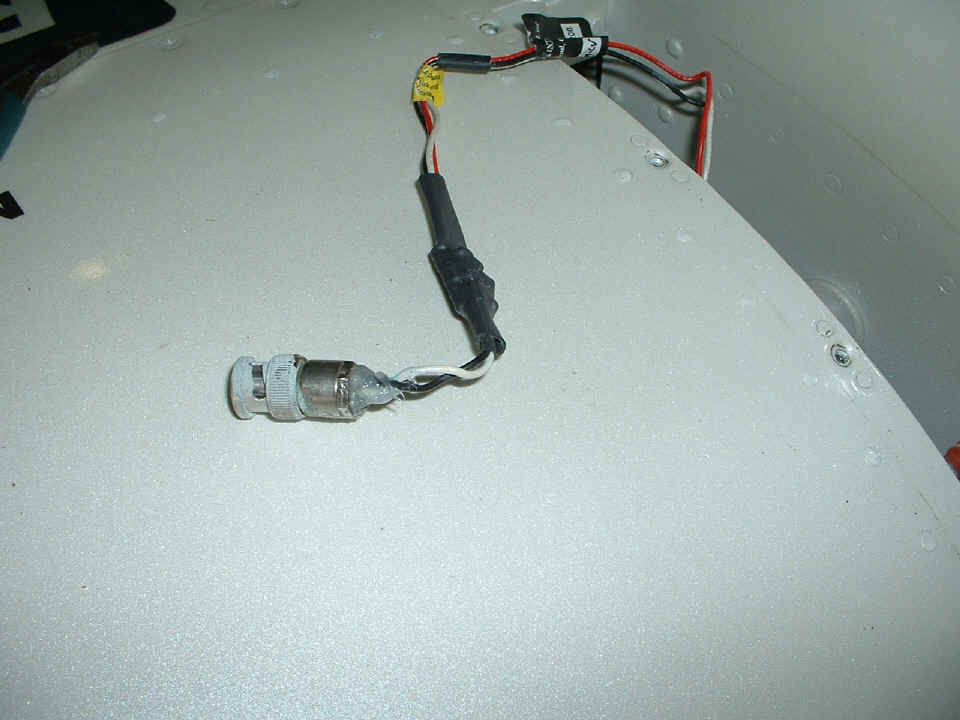 With the camera this close to the fuel tank, the PEARL WHITE paint shows the pearl effect.  The "sparkle" you see is beneath the top layer of clear coat finish of the paint job.  A high school classmate of mine whose husband works for a Cadillac dealer has advised me that this color of white is known as "White Diamond".  After seeing the photo above, I can see why they gave it that name.   Thank you Dianne for the trivia update!.

September 14, 2005:  I got Wendell started preparing the stiffeners for the rudder this morning, then went next door to the hangar to finish the fuel tank sensor connection and put back the wing root fairing on the right side of the fuselage.  After I took the BNC connector photo above and connected it to the fuel tank, I got into the airplane and turned on the Avionics Master switch and noticed that my Dynon D-10A did not come on automatically.  When I pushed the Dynon power button, the internal battery powered it up and prompted me with a message about OAT Sensor NOT FOUND.  That told me that I forgot to plug in the D-sub connector on the back of the Dynon unit yesterday.  Out came all the panel screws, and on went the connector -- then all was well again!  I spent most of the day working with Wendell to develop his metal working skills on the rudder.

CLICK HERE for Ray Johnson photos on PAGE 169A.