September 5, 2005:  This is Labor Day 2005 and I headed out from Georgetown Airport (KGTU) for points East.  My son took this picture with my camera after the airplane was packed and ready for departure. 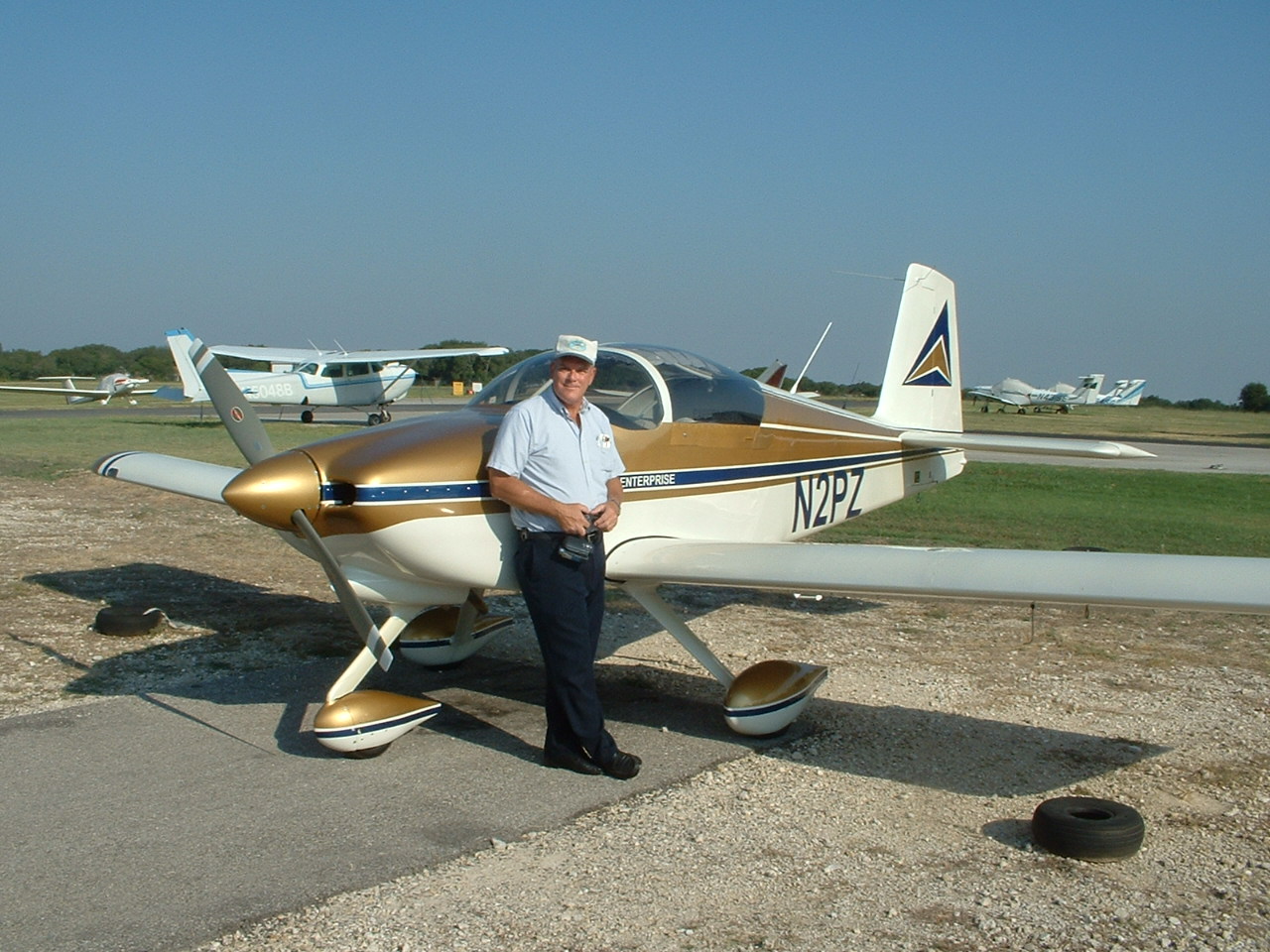 In the first leg of the trip to Carthage, Texas for a planned fuel stop, I noticed this Texas oil field and snapped this picture.  I also found that the headwinds varied from 10 to 20 MPH depending on the altitude I chose.  At one point, my GPS ground speed was down to 150 MPH, while my true airspeed was 172 MPH.  This leg of my flight added 1.7 hours to the Hobbs meter. 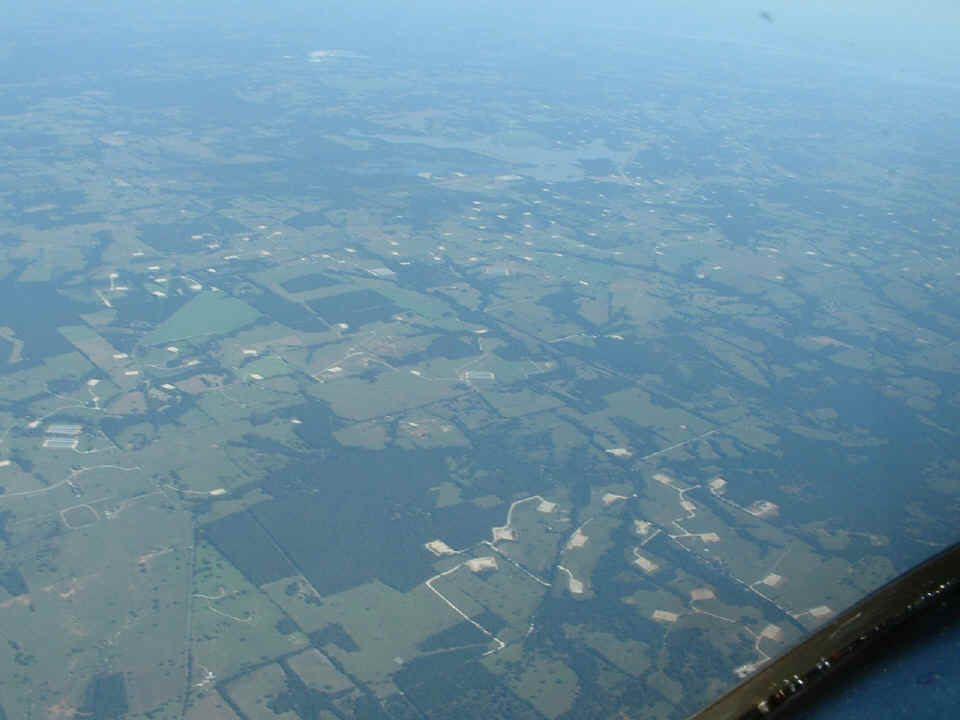 After fueling, I towed "Enterprise" over to a nearby hangar to visit with James Swilley.  He gave me his card when I stopped by for fuel on Saturday, September 3rd.  I thought the sentiment at the bottom of the card was "different" and in a way made some sense!  And before you ask, his "escort service" is escort VEHICLES for truckers to move permitted wide loads across the country. 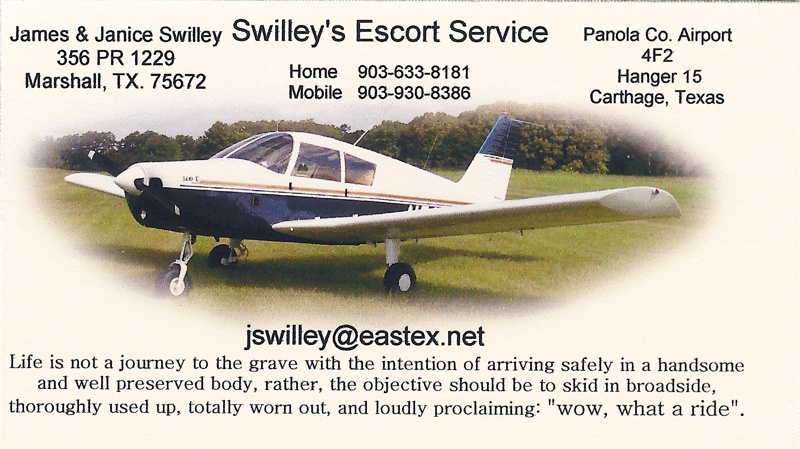 I got out my computer and edited the names on PAGE 166 for the four guys who came out to look at my airplane when I stopped here for fuel this past Saturday.  James told me that Harold Campbell is building an RV-8.  I asked him to call Harold to see if he would come out to the airport, open his hangar and let me take some pictures of his project.  Harold said YES and would be at the airport in 15 minutes.  Those photos are on a new page in my OTHER RV section of this web site. 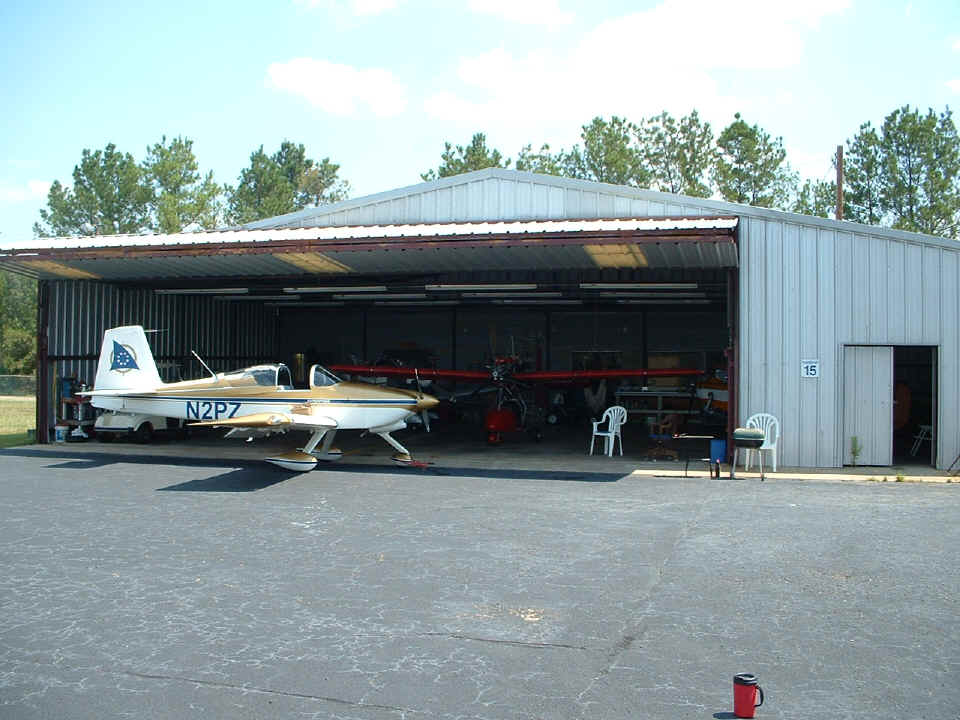 I did not notice the RED CUP in this photo when I snapped it.  I was making sure the hangar number was visible when I was looking through the camera view finder.   That NEW RED cup has been with me since just after the week of 9/11/2001.  I accidentally left my previous RED CUP behind at the Thrifty Car Rental return counter when I was heading home from Boston via the Hartford Airport on September 14, 2001.

This is the shot I snapped of the flight line just as I finished my engine run-up before takeoff from the Panola County Airport in Carthage, Texas.  The fuel pumps seen on PAGE 166 are out of sight beyond the beacon tower near the FBO, the low white building to the left of the hangars. 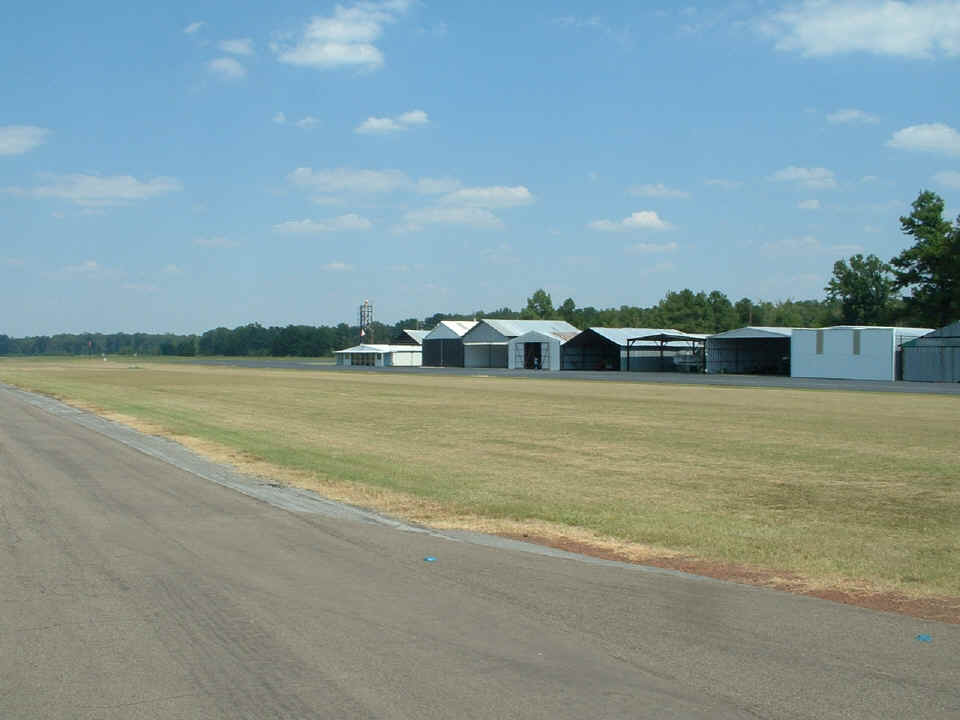 I climbed out of Carthage and past the Shreveport, Louisiana area Class-C airspace.  When I finally got into Memphis Center airspace, I found out the Columbus, Mississippi MOA's were cold on this Labor Day Holiday.  That made my flight a bit easier not having to worry about the USAF pilots out on training flights.  I continued to have some headwinds and dodged some cumulus cloud build-ups on this three-hour segment of today's flight.  After the three hours of flying, I landed at Lawrence County Airport near Courtland, Alabama.  I arrived about 10 minutes after the FBO closed at 4 PM Central Time.  There was no one around when I started to pump fuel from the self-serve system.  I was pleasantly surprised to find the fuel priced 10 cents less than what I had seen posted on AIRNAV.COM at $3.00 per gallon instead of $3.10. 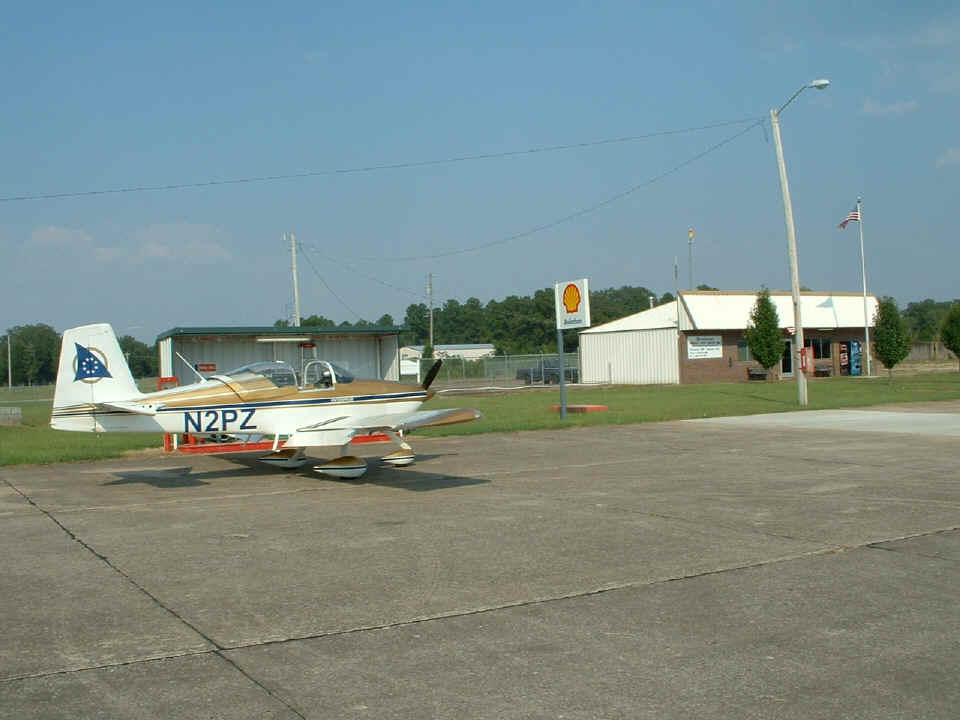 After takeoff from Courtland, this TVA facility came into view on the banks of the Tennessee River just west of Decatur, Alabama.  It is the Brown's Ferry nuclear power plant providing additional electricity to the area. 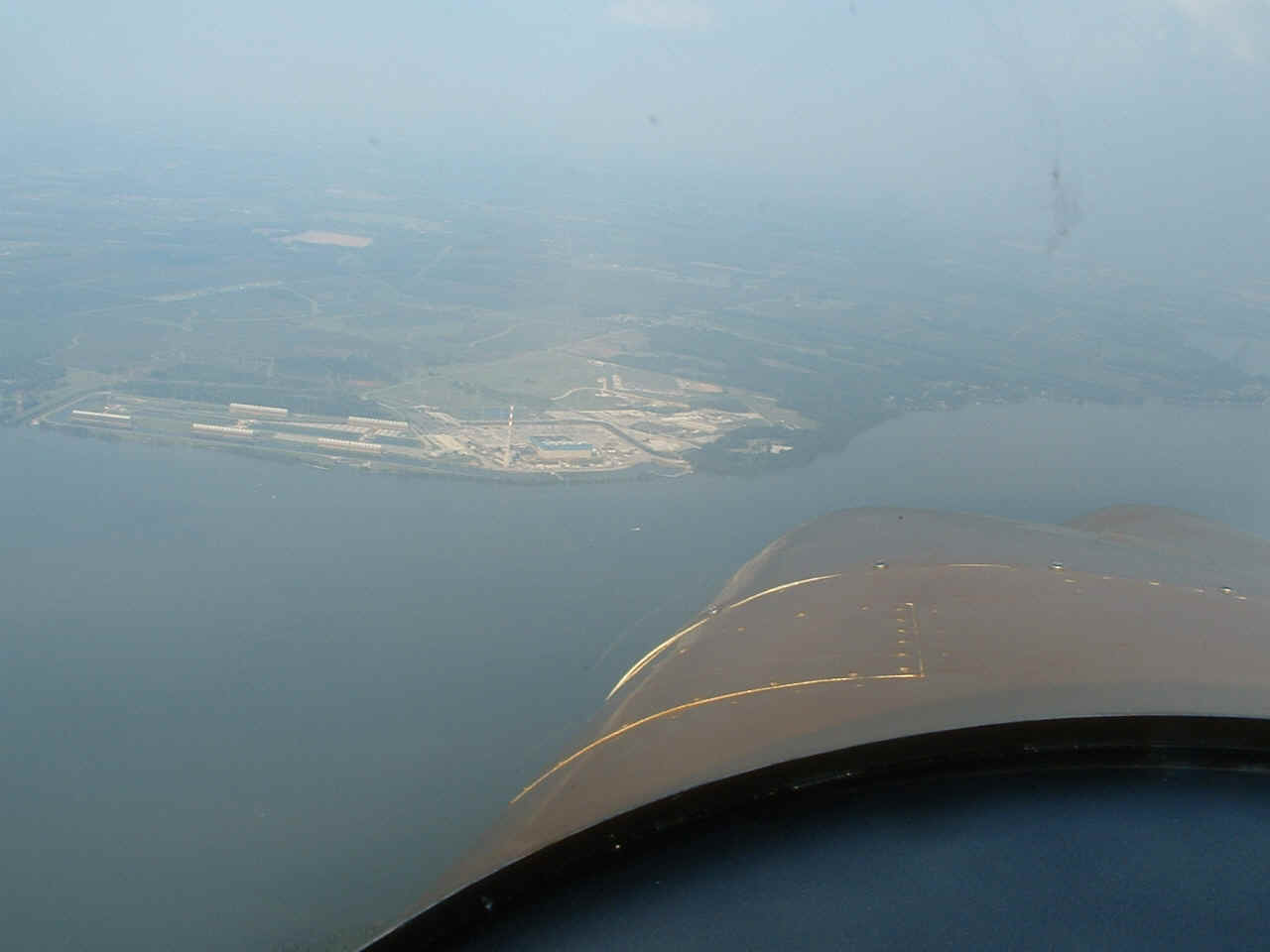 I continued East into the Huntsville Class-C airspace only to have to divert around rain showers along the north side of the 10-mile ring.  After turning the corner on that shower, I turned back to the right to get past another one.  By the time I got over the Moontown Airport (3M5), I could see clear skies ahead and turned direct for my home base at Folks Field.  It was 6:30 PM when I got the airplane put away with 92.3 hours on the Hobbs meter as the hangar door came down on a successful weekend trip to Texas!

September 6, 2005:  I had a "normal" day again helping Wendell work on his RV-8 empennage.  I have posted a few more pictures in his section about him learning to dimple the skins.  He also learned how to use the Scotchbrite wheel on the edges of the skins.  I cleaned the bugs off my airplane and polished the windshield inside and out.  I also put back the front side panel with a small pocket attached using contact cement.  It was coming loose when I was in Texas.

I also updated the Anti-Virus software on this computer and spent some time updating the web site.  I have to contact my web server company to get them to find out why my hit counters are going ballistic.  One click of the refresh key can add from 10 to 150 counts to the home page and the other pages that have counters.

September 7, 2005: I spent some time this morning cleaning up the HIT COUNTER issue with the web site.  I re-installed the Front Page Extensions on the server and the counters all settled down to normal 1-to-1 operation for now.  I will keep watching them to see what happens in the coming days and weeks.

I need to take out my Nav-Aid controller for service.  I noticed the turn coordinator LED bar graph is having trouble.  The wing leveler worked like it always does, but the bar graph does not move in turns.

I have downloaded the GPS track from my GPS.  The total mileage traveled in my trip to Texas and back is over 1,818 miles.  The trip West put 5.2 flight hours on the Hobbs meter and 5.7 hours coming East.