July 31, 2005:  Dale wanted one more picture using his camera to show off his Mercedes-Benz beside the airplane at Sky Manor Airport.   The airplane is now fully packed again with only the pilot seat empty for the ride back to Tennessee. 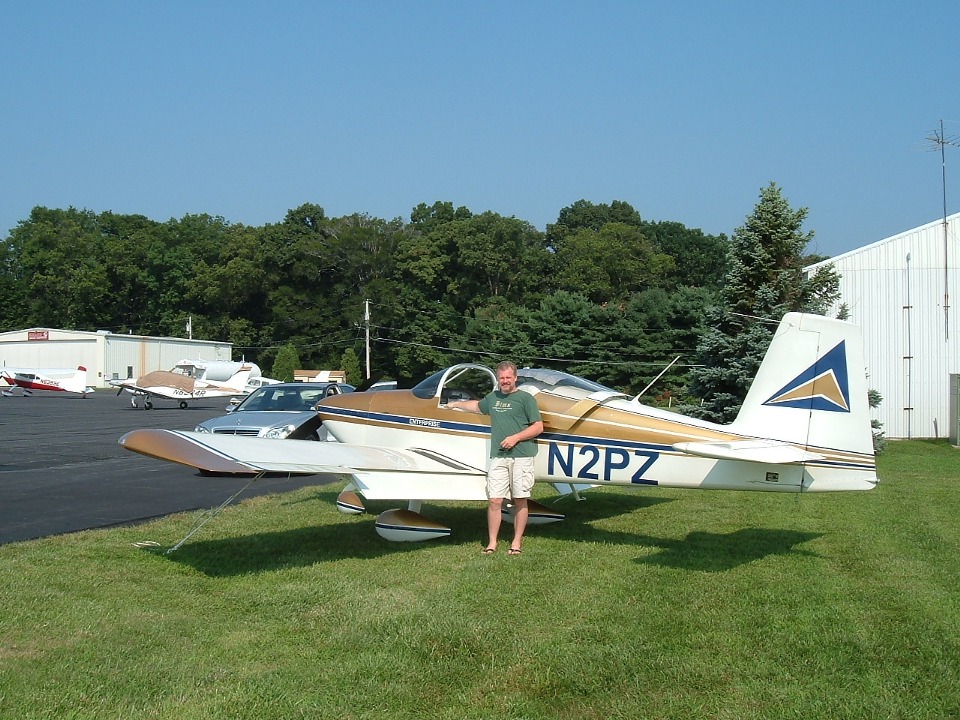 He managed to get this one shot as I was taking off for York, Pennsylvania to have lunch with my son, his wife, and my grand daughter.  I kept the airplane down low after getting in the air to give Dale a closer view of the plane in flight for this photo.  Look for the airplane in front of the trees just above the runway.  Dale was standing in front of the Sky Manor Restaurant when he took this photo.  The runway here is under 2500 feet in length and I was taking off uphill on this departure.  I was airborne in less than 600 feet with my full load of fuel and all my Oshkosh camping gear, clothes, and of course the computer bag and box of charts on the passenger seat beside me. 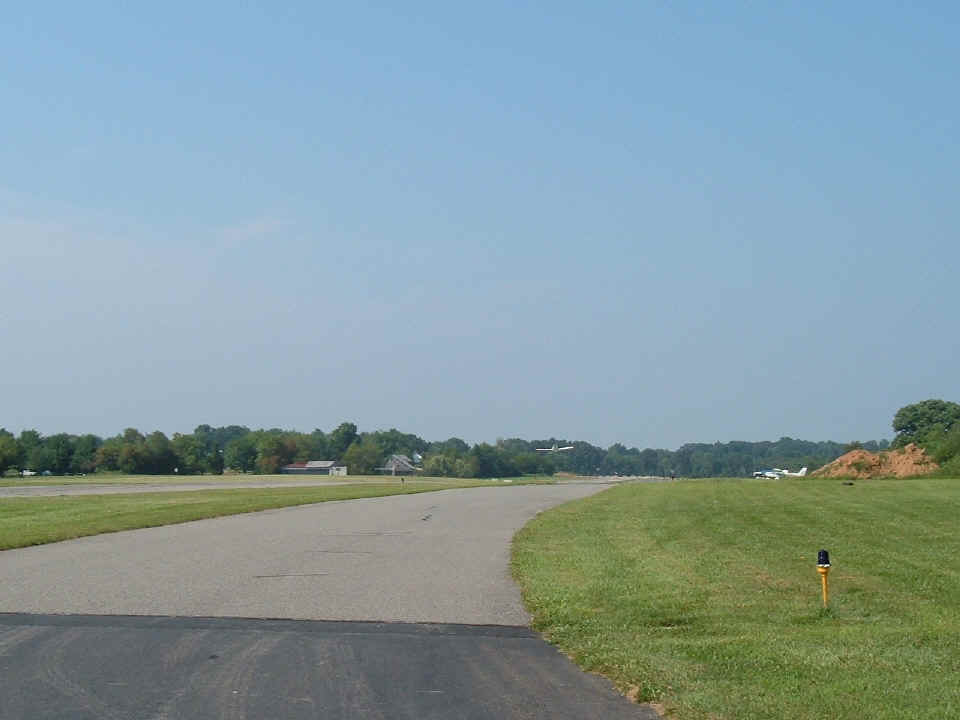 The 109-mile flight to York, PA took less than an hour.  I was surprised to find a good restaurant in the airport terminal building.  York is not a place with scheduled air-carrier service since it is so close to Harrisburg, PA.  I finally got out my camera when we sat down in the restaurant.  Katie was taking in all the action around us.  Mom Christine is telling the folks at the next table that Katie is now 19 months old. 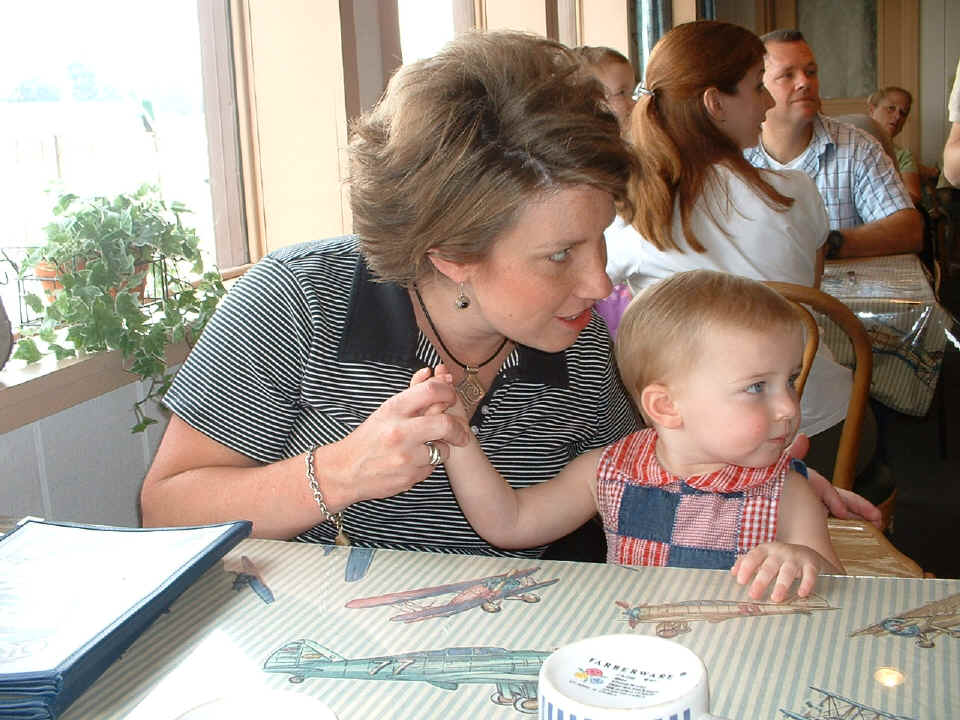 She is building her vocabulary and responded immediately when Dad Jason asked her to smile for this picture. 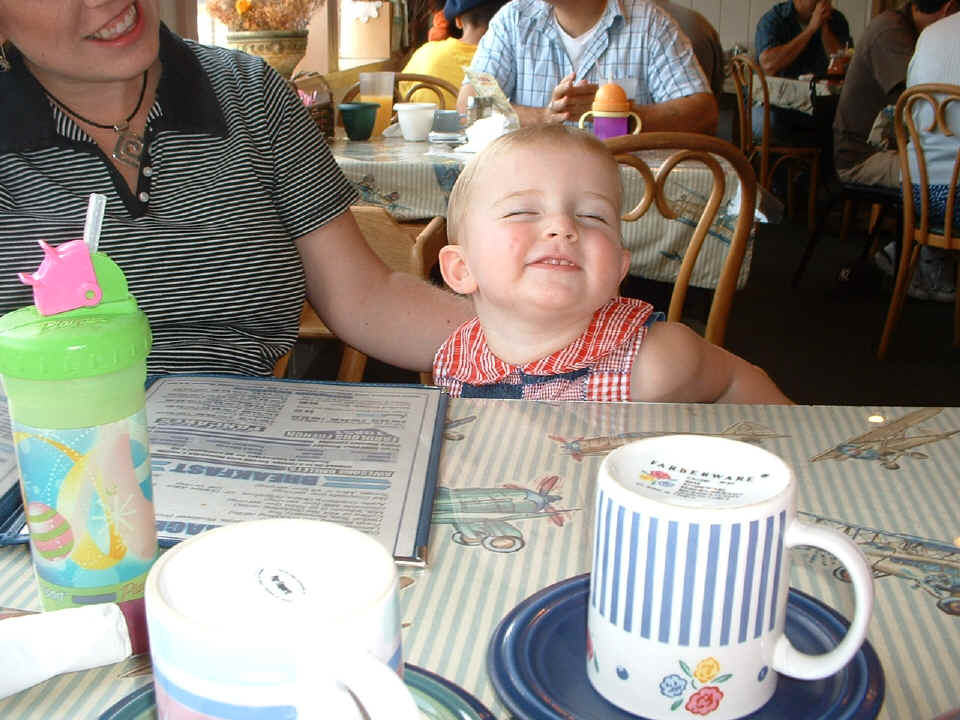 After our meal it was out to the flight line just outside the restaurant window to see Grand Dad's airplane.  Katie had a chance to stand on the wing walk on the pilot's side for a look inside.  Jason kept a hand on her while she held onto the canopy slide rail and looked inside at "all the stuff" in the panel.  A new baby sister will be born by C-section on August 8th unless she has other ideas of coming sooner as Katie did on February 26, 2004. Chris wanted me to get into the picture with my son Jason and Katie. After lunch it was back in the air and westbound toward Cincinnati.  There was a big weather front with storms along the Appalachian Mountain Range down in Virginia.   I kept an eye on those towering cumulus clouds and monitored flight watch as I headed west toward two possible locations to refuel near Cincinnati.  As the clouds in front of me got lower and lower heading west, I finally decided the fuel on board would get me home to the Chattanooga area with safe reserves or to an alternate if the weather front cut me off before getting home. 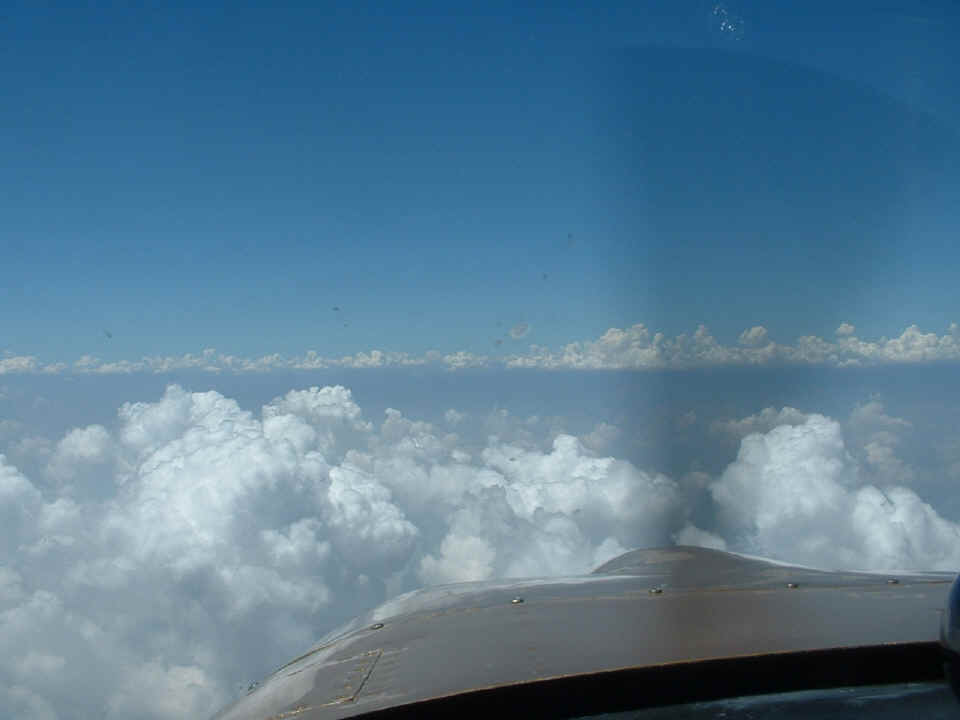 The Garmin 296 told me how far away home was at any time and the fuel I would need to get there.  Cruising at 12,500 MSL minimized the fuel burn rate to around SIX gallons per hour and gave me an acceptable forward speed.  The Dynon is set up in KNOTS and is showing 143 knots true airspeed.  The true airspeed dial on my passive airspeed indicator is set up in MPH, and the GPS 296 is currently set for MPH also.   The ground speed is reading 157 MPH in this photo as I am heading west over the western part of Maryland.  That amounts to about a 10 MPH headwind at this altitude.   At this point in the flight my next stop is still near Cincinnati, but that will change later as the weather to my south improves.