July 28, 2005:  I managed to get those night photos last night when AeroShell Square was relatively empty.  Right after I finished my photos, a "Theater in the Woods" meeting let out and there were many more people there.  My timing was lucky again.  You can compare these first two "time exposure" photos of the Global Flyer to see that my camera was using a very long shutter speed.  Notice the two folks that are blurred in the first of these two photos using available lighting.  I used a very small tripod with my digital camera and tripod sitting on the roof of a Ford display car parked nearby.  You can see the reflection of the airplane on the waxed roof of the car at the bottom of the photo. 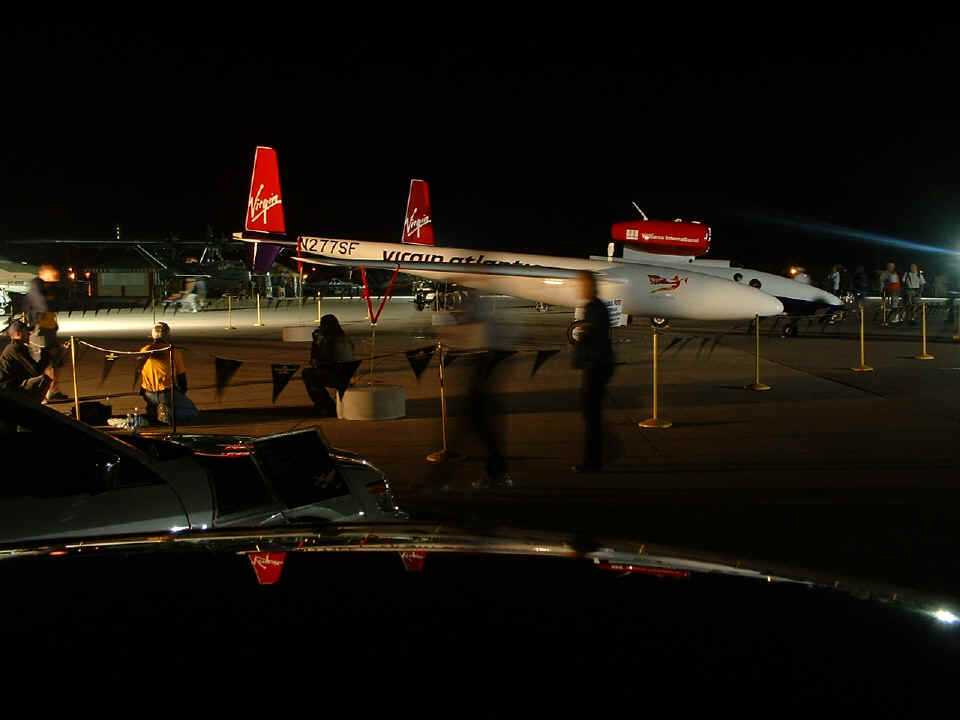 This second photo shows no people walking by and blurring across the picture. 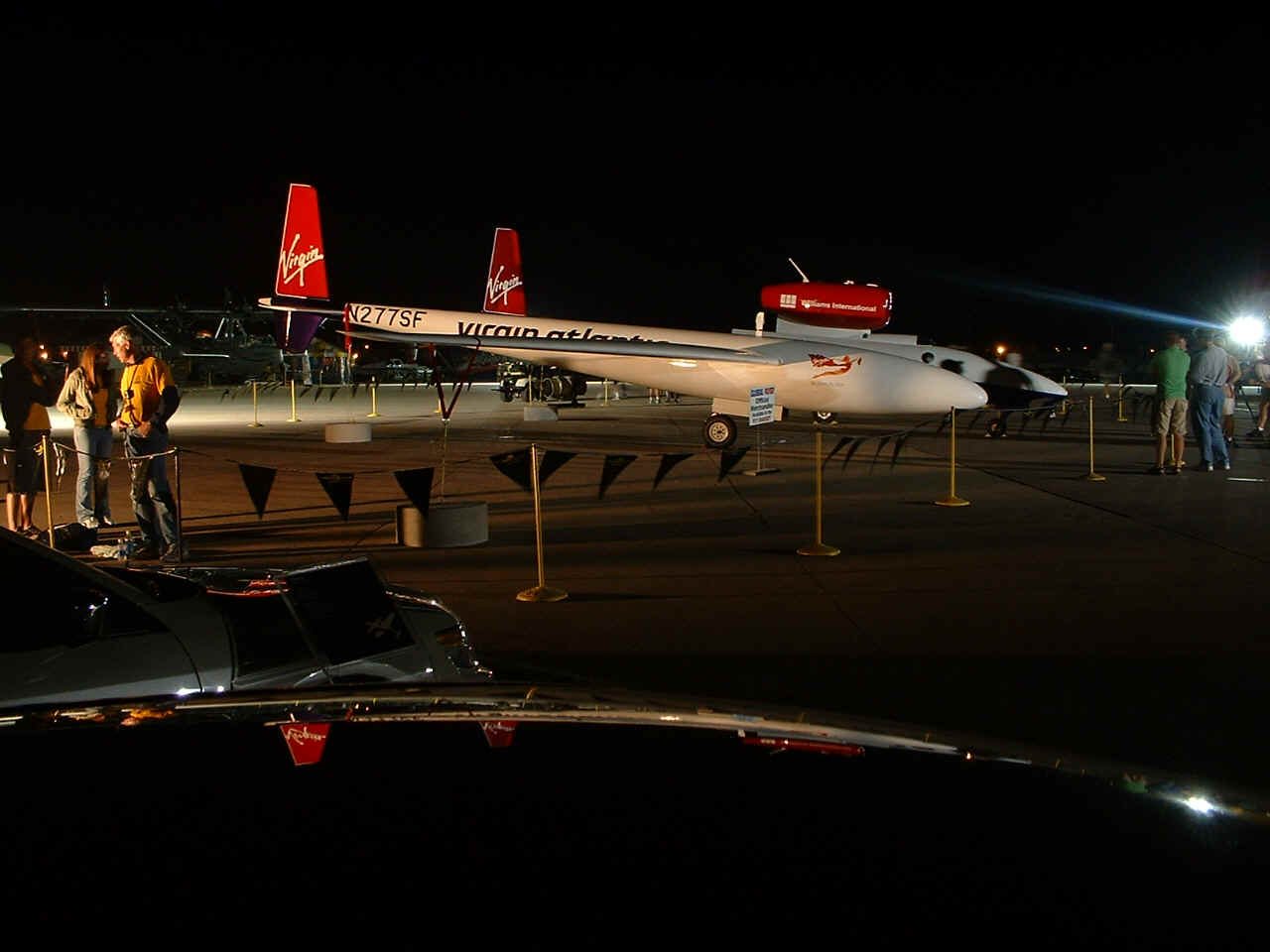 Here is a flash photo of the cabin area where the pilot flies this very unusual airplane.  The round dark circle is the hatch for pilot entry and exit. 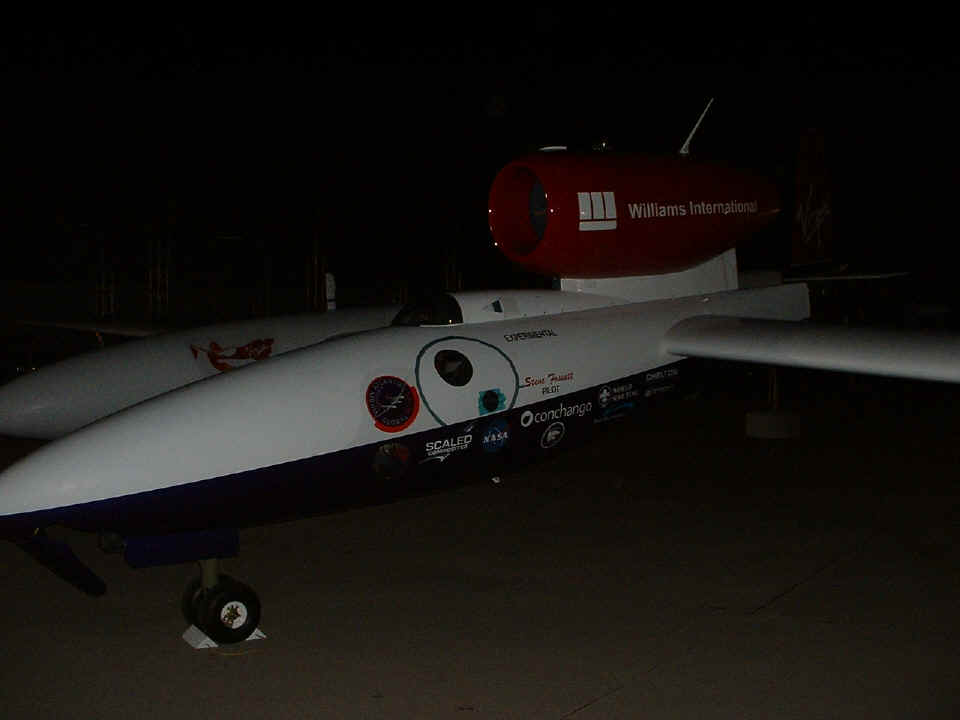 Here is the "nose art" on the LEFT fuel boom of the aircraft. 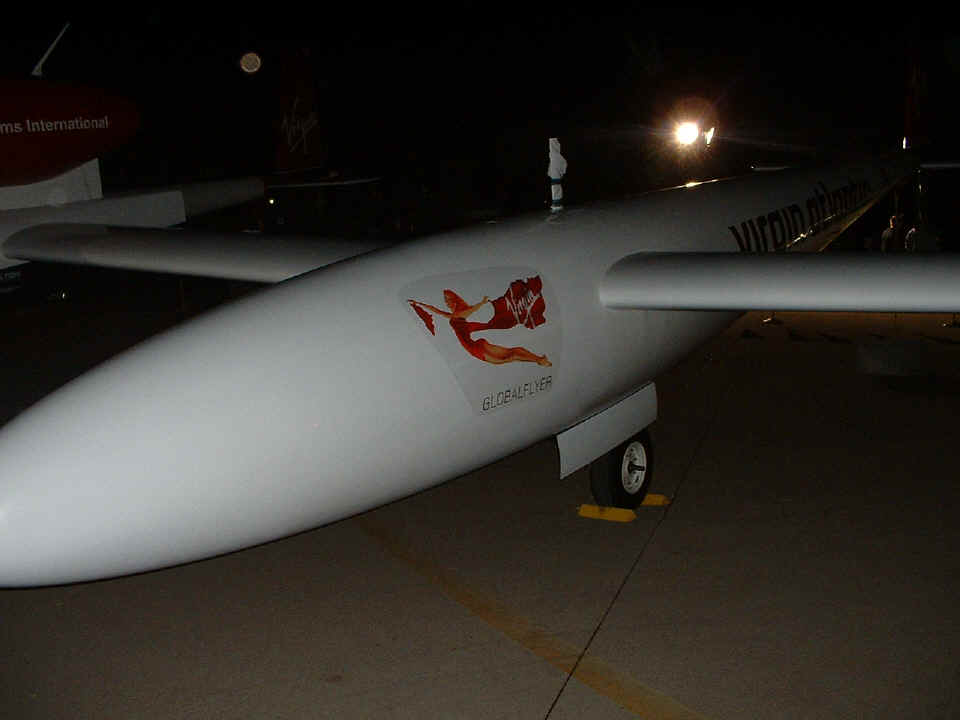 And sitting on the south side of the square is another Burt Rutan purpose-built pair of airplanes.  The "White Knight" mother ship carries "Space Ship One" below the cabin to heights of 40,000 feet for an air-launch into sub-orbital space flight.  The next stop for these two is the Air and Space Museum near Dulles Airport, Virginia.  Space Ship One will become the newest exhibit there.  The "White Knight" has more work to do before it takes its place in that same museum sometime in the future. 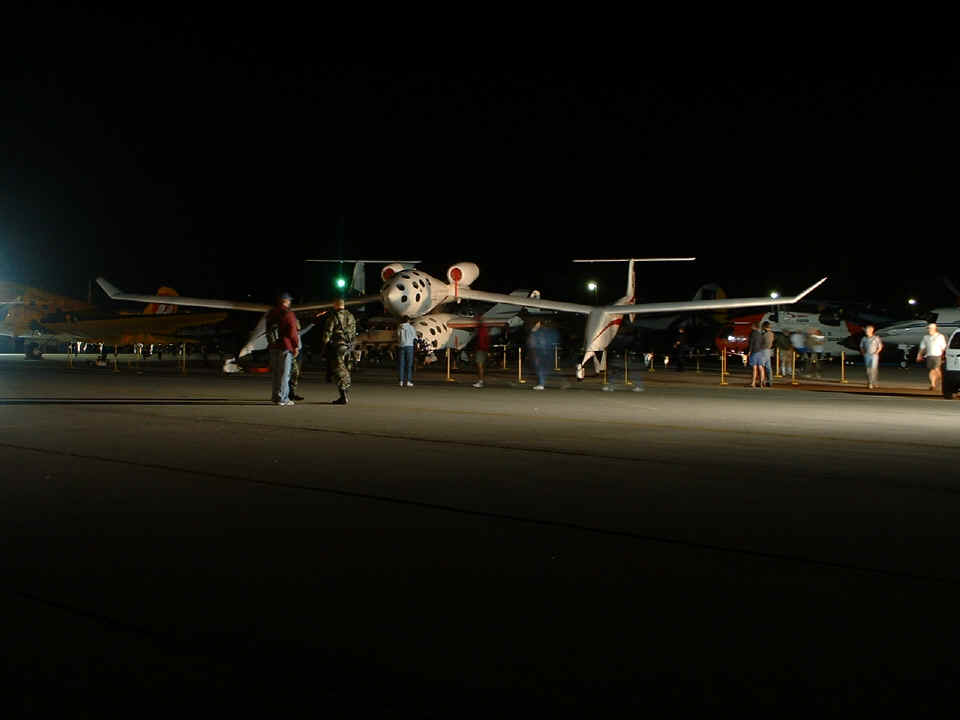 I have had my weather briefing from the Flight Service Station and will be departing Oshkosh shortly.  Today the flight is up to the upper peninsula of Michigan and over to see my older cousin at Brule, Wisconsin.  Tomorrow, the over 1000-mile flight will take me across Michigan, Ohio, Pennsylvania, and to Pittstown, New Jersey.   One fuel stop in Alliance, Ohio will be the mandatory break.  I am sure there may be others as time and personal needs require.  There is no internet access for me in Brule, so you won't hear from me or see any more pictures until I get to my destination in New Jersey.

I almost forgot:  A tip of the hat to the three airplanes that arrived late yesterday from TVRVBG - Sam Buchanan, Bob Butler, and Jim Harchenko are the pilots.

July 28, 2005 UPDATE:   This additional posting for July 28th is made on August 3rd(while I am back at home) to include my pictures taken during my departure from Oshkosh.  I took this one as I taxied past AeroShell Square heading for a departure on runway 36.  I did not look through the viewfinder on this one.  I pointed the camera in the right direction and quickly snapped the shutter. 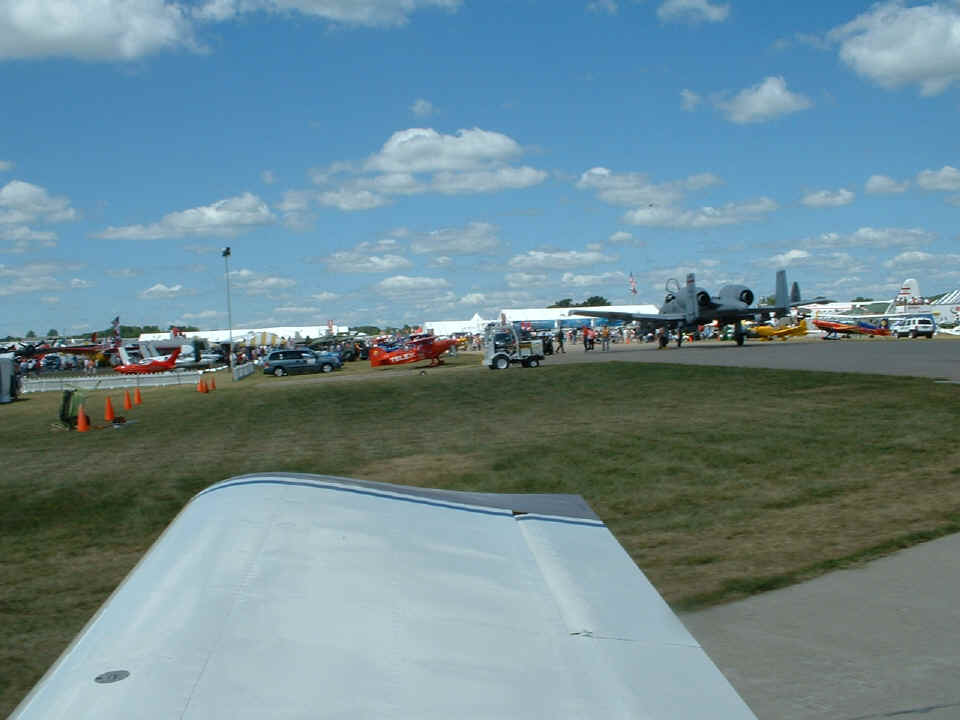 This is the most Ford Tri-Motor airplanes I have seen in one place.  I did notice right after I took this photo that one of them was from Grand Canyon Airways. 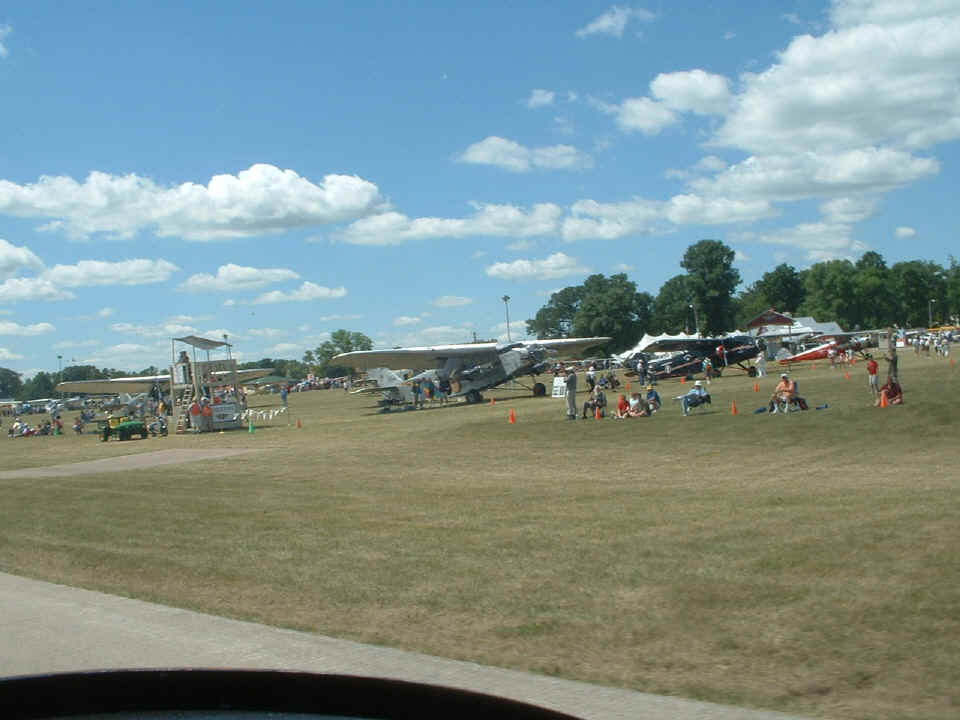 Several other airplanes were ahead of me as I taxied south to the end of runway 36.  There were flagmen at every intersection along the taxiway.  As I neared the end of the taxiway, one of the men held up a paper and I was not sure what it was all about.  He motioned for me to stop and that was when I realized he was holding up a copy of the AirVenture NOTAM.  I held up my copy which was on my lap and he waved me toward the runway.  There was an air traffic controller talking on the radio to tell each airplane where to taxi into position on the runway for takeoff.  The RED RV in front of me was called "RED RV" by the controller since his numbers were only three inches high.  When I got to the end of the runway, I received my proper call sign from the controller:  "NOVEMBER TWO PAPA ZULU, cleared for take off!"  Those 12-inch numbers were a good choice. 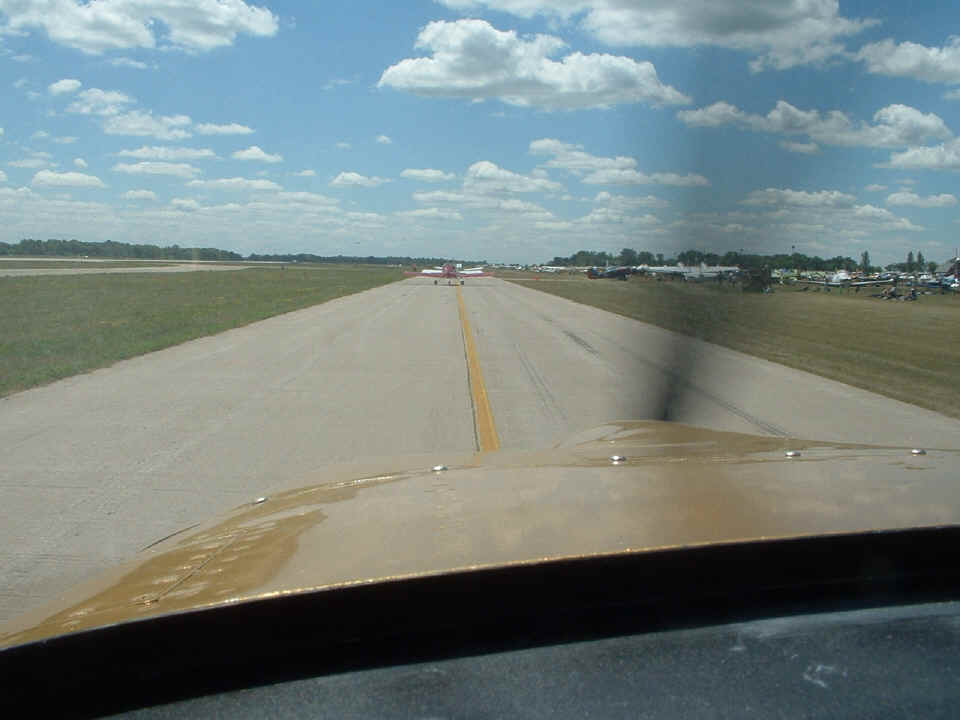