July 28, 2005 UPDATE:  I took off on runway 36 climbing to 1000 feet by the time I reached the tower.  I turned to a heading of 150 degrees and headed out of the Class D airspace before turning to my departure course to the North.  Here is the picture I got of the airport as I climbed to my cruising altitude.  The fabric from my seat is reflected on the inside of the plexiglass canopy.  This picture is taken from a position North-Northeast of the airport from about seven miles out. 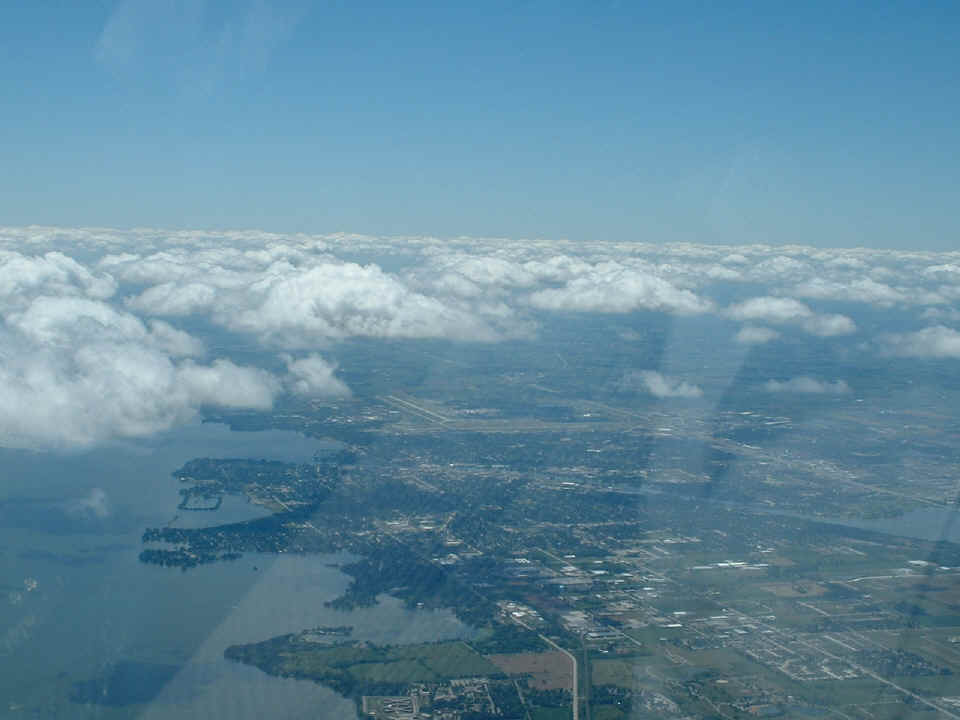 I flew up to Iron Mountain, Michigan (KIMT) to refuel where Kubick Aviation has a self-service fuel pump with 100LL priced at $2.79 per gallon.  Chad Kubick was there when I pulled up to the fuel pump.  We talked a bit about AirVenture and he was about to close up and head home, then drive down to OSH in his motor home to see the show for the weekend.  I mentioned my flight plan for Friday to New Jersey and he pointed out a good crossing point near the upper end of Lake Michigan. After filling N2PZ with fuel, I continued flying northward dodging a line of rain showers in the U.P. of Michigan and got to a point on US 41 between Michigamme and Nestoria, Michigan.  That is Ruth Lake at the bottom of the photo adjacent to US 41 on the north side of the highway.   At this point in its route, US 41 is going in an East/West direction.  The little village of Nestoria is at the bend in the highway near the center of the picture. 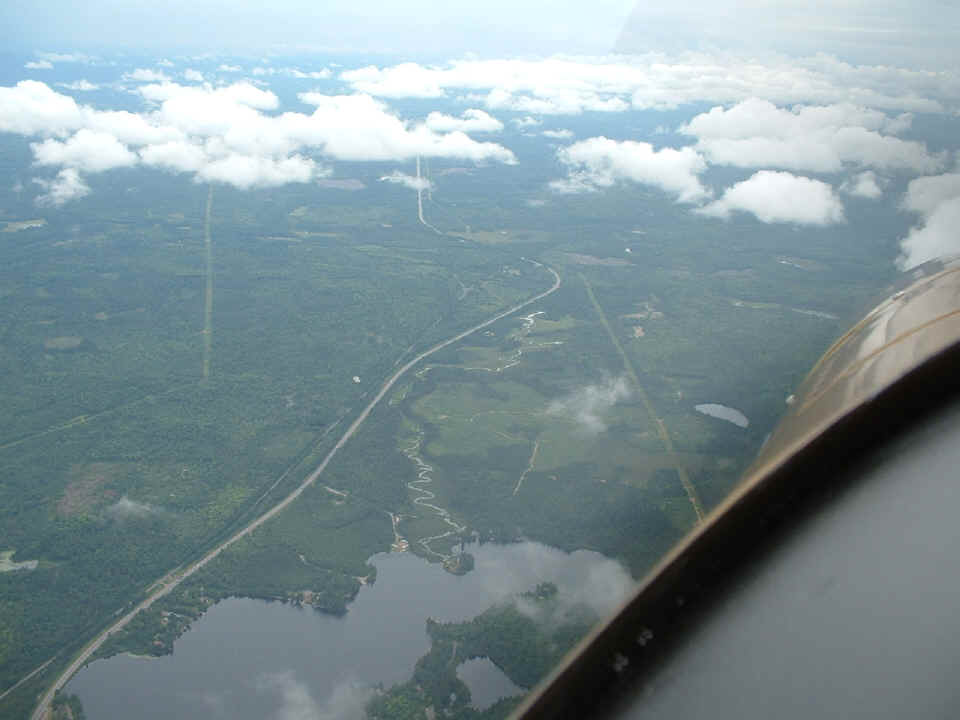 This photo is looking west at Houghton, Michigan in the distance on the south side of the Portage River.  US 41 is hugging the shoreline of the river on the south (left) side.  That sand bar in the lower right quadrant is known as Grosse Point. 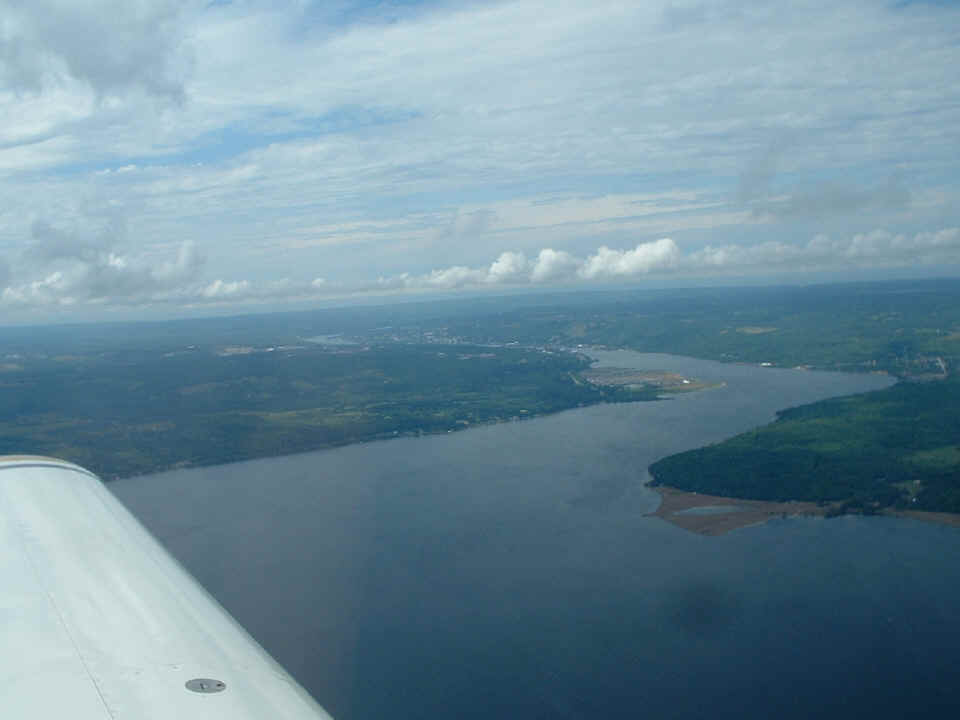 This is the airport that serves Houghton and the surrounding area. 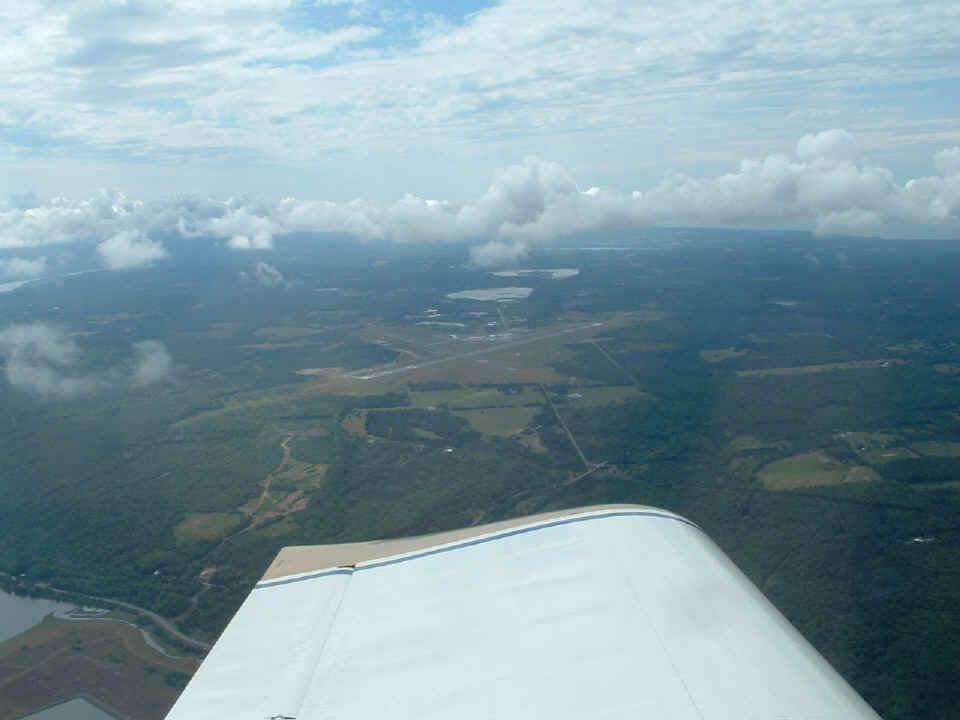 This is the view of the northernmost point of the Michigan "mainland" of the upper peninsula (U.P.) area.  The ski resort is closed for the summer, but the water sports on the lake next to it should keep folks coming in the warmer weather, like now. 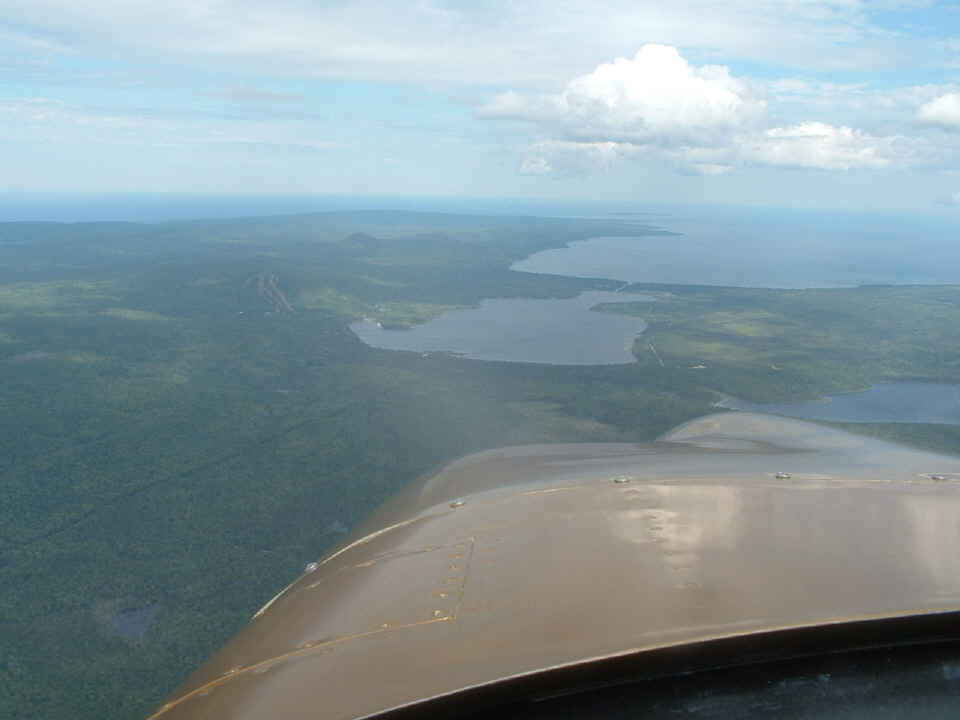 This ski resort is located at Mount Bohemia, which stands 1465 feet above sea level. 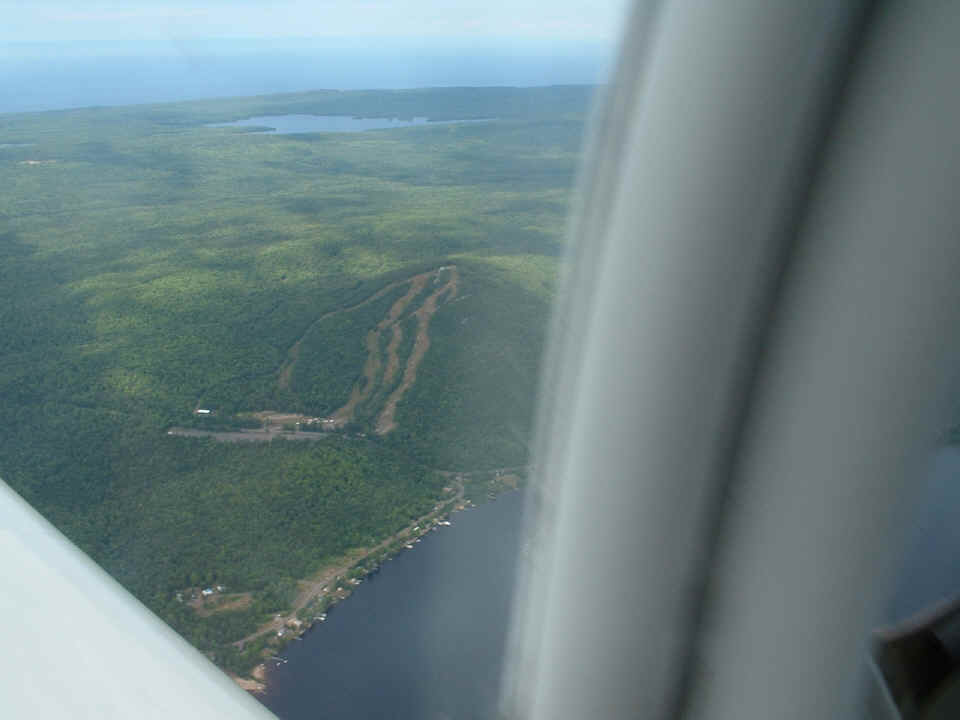 Here is what I came to see, the north end of US 41 at Old Fort Wilkins just East of Copper Harbor, Michigan.  There is one car parked in front of the sign I photographed last year.  There is a little circle around the sign where the highway begins/ends and the stripes are painted on the pavement. 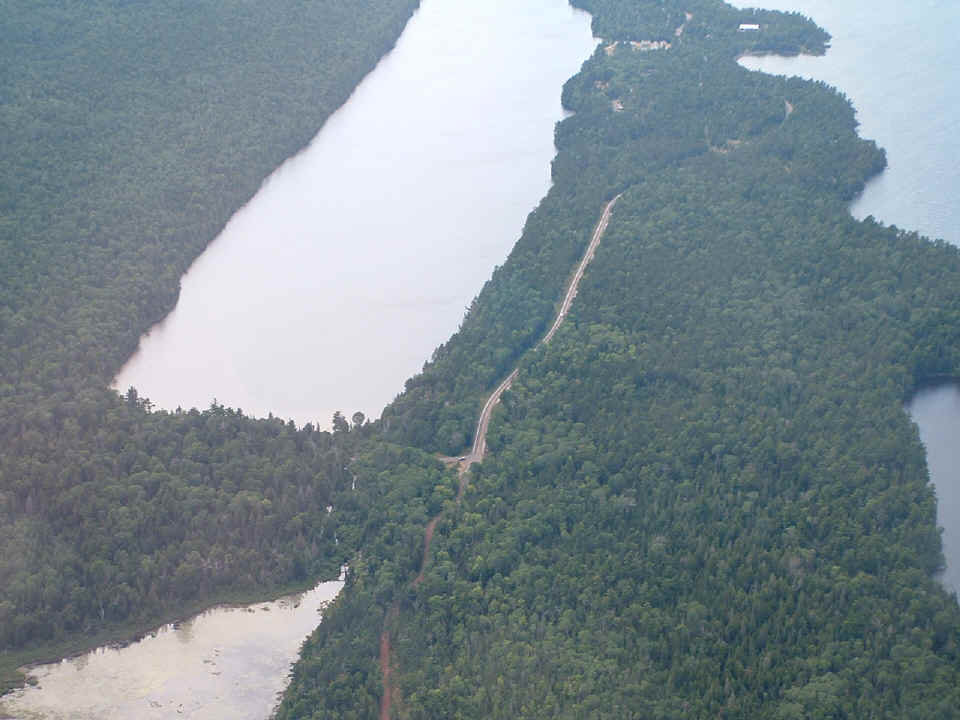 Here is a view of the town of Copper Harbor.  That is US 41 coming in at the left of the photo and turning south and disappearing toward the upper right corner of the photo.  Miami is another 1989 miles to the south.  Michigan route 26 begins/ends at the intersection and exits the photo at the right side to continue along the shoreline of Lake Superior.  I drove down route 26 last year. 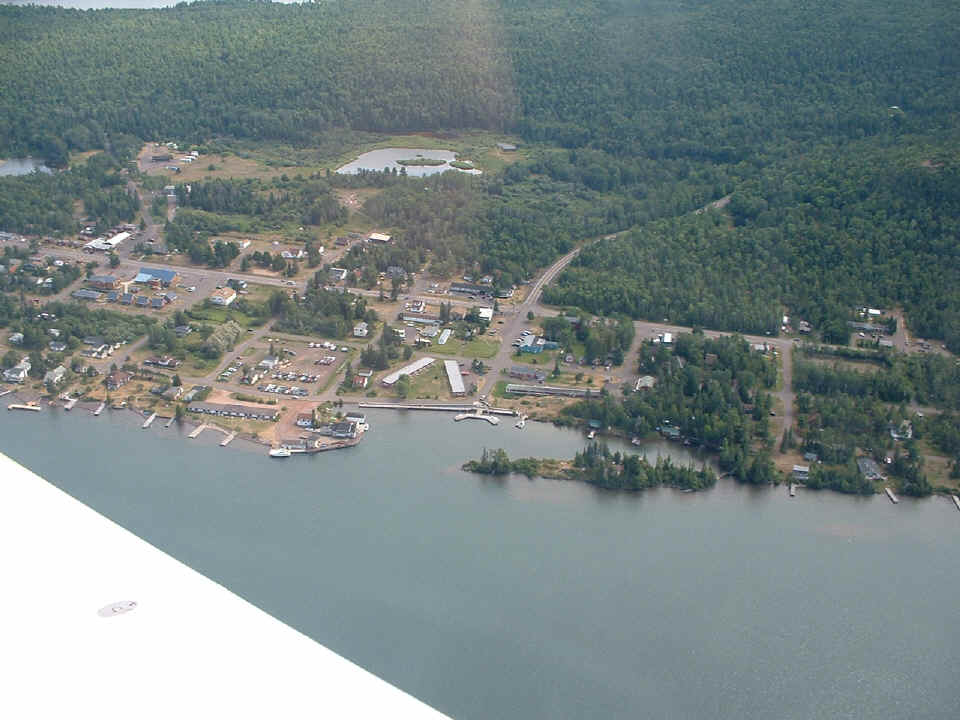