April 15, 2005:  We had another gorgeous day with a cool wind out of the north.  The high was about 76F today, but the breeze made it feel almost like air conditioning.  I drilled out the holes that were left open when I riveted the RIGHT wing together.  I put a #8 screw through the holes and matched a platenut to the screw, then drilled the new rivet holes to secure the platenuts on the rib at the wing root.  The object here is to get the wing root fairing ready to go on the wing.  I want to do all the stuff that is going to generate metal filings and fiberglass dust while I am still in the garage, not in the hangar with four other airplanes.  This is the top side of the wing in this first photo.  The molex connectors for the landing light and wing tip marker light are visible on the left side of the photo with the wing spar behind them. 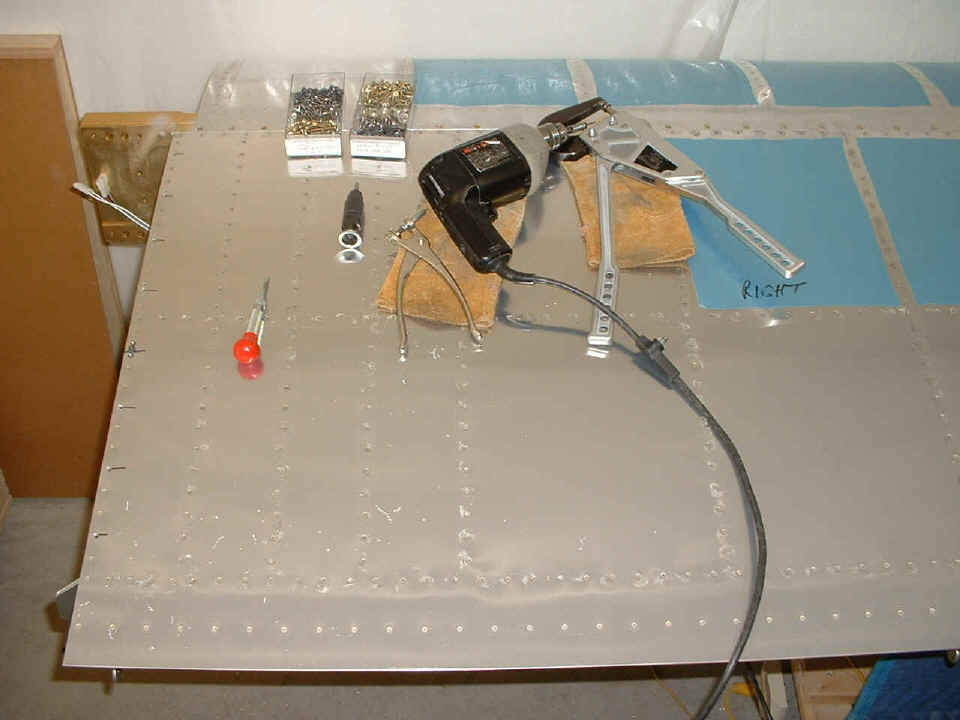 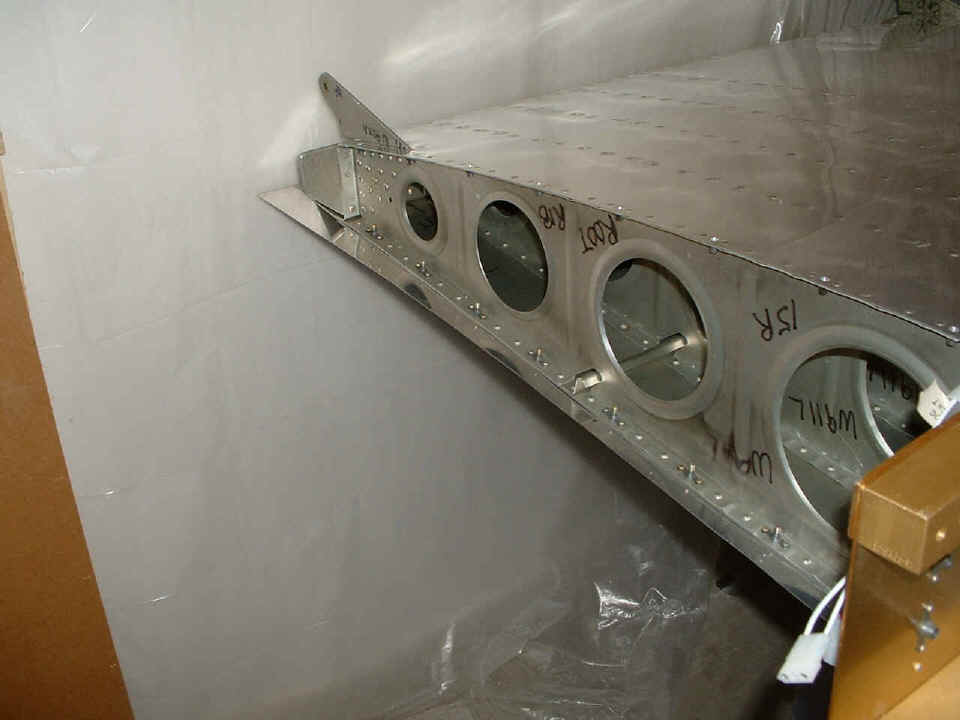 Here is the last picture of the day, showing the wing fairing wrapped around the leading edge of the fuel tank to check the alignment with the screw on the bottom of the spar.  I held the fairing off to the side slightly to show the screw that will eventually be going through that skin when I enlarge the pilot hole to accept the #8 screw, then dimple the fairing.  That other pilot hole near the fuel drain plug is one of many that go around the edge of the fuel tank.  They point the way to drill holes for more #8 platenuts to completely secure the wing root fairing in position. 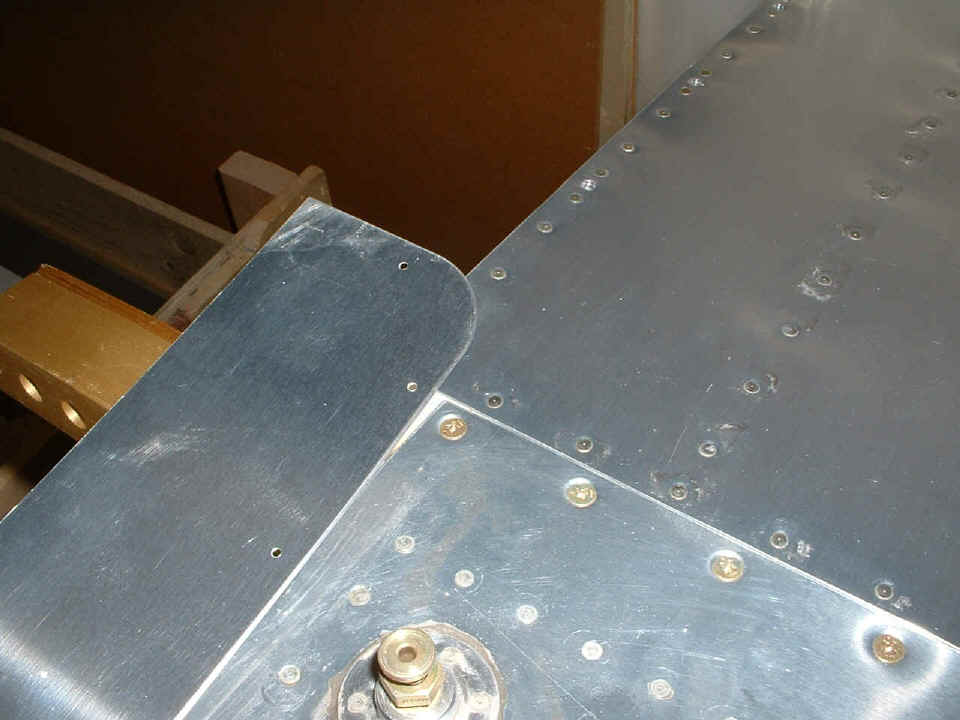 Add 2.7 hours to the log book on this Friday, when errands and chores took some my time today.

April 16, 2005:  I drilled, deburred, and dimpled the first two holes near the end of the RIGHT wing fairing.   I then secured the fairing on the under side of the wing at the spar and the first hole in the rib behind the spar.  I then drilled all the other holes around the edge of the fuel tank to accept the #8 screws. 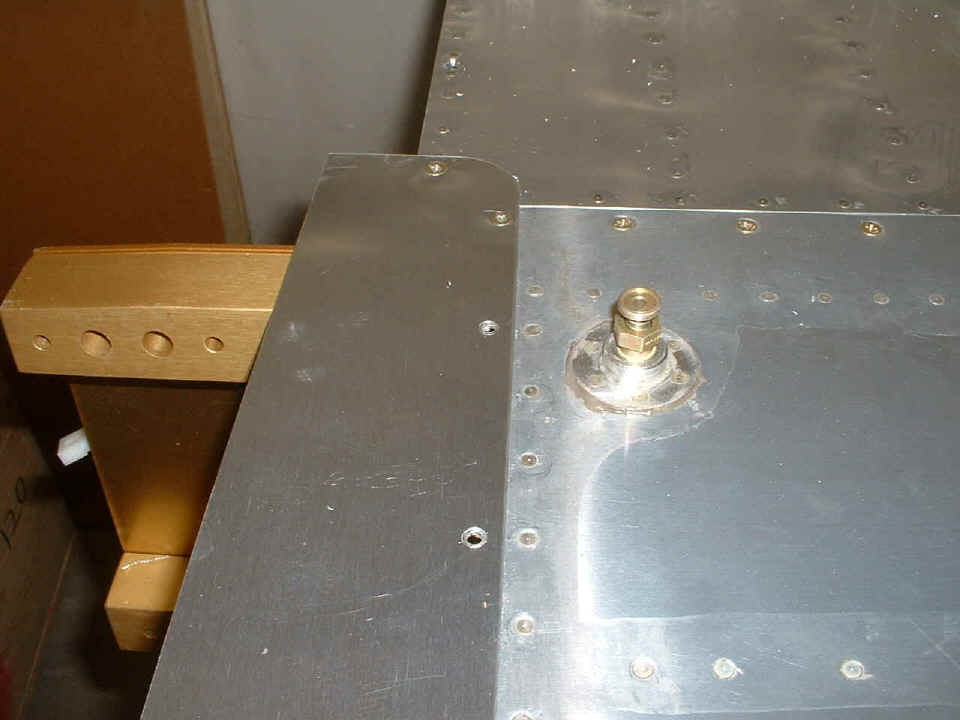 Next came the realization that the excess tank sealant will need to be removed where the platenuts are being installed.  Van's manual talks about trimming away the edge of the wing fairing to clear the side of the fuselage as needed.  That will have to wait until I get the wings bolted to the fuselage at the airport.  Since putting these platenuts on has to be done with the wings OFF the fuselage...well, you know why I am doing this now. 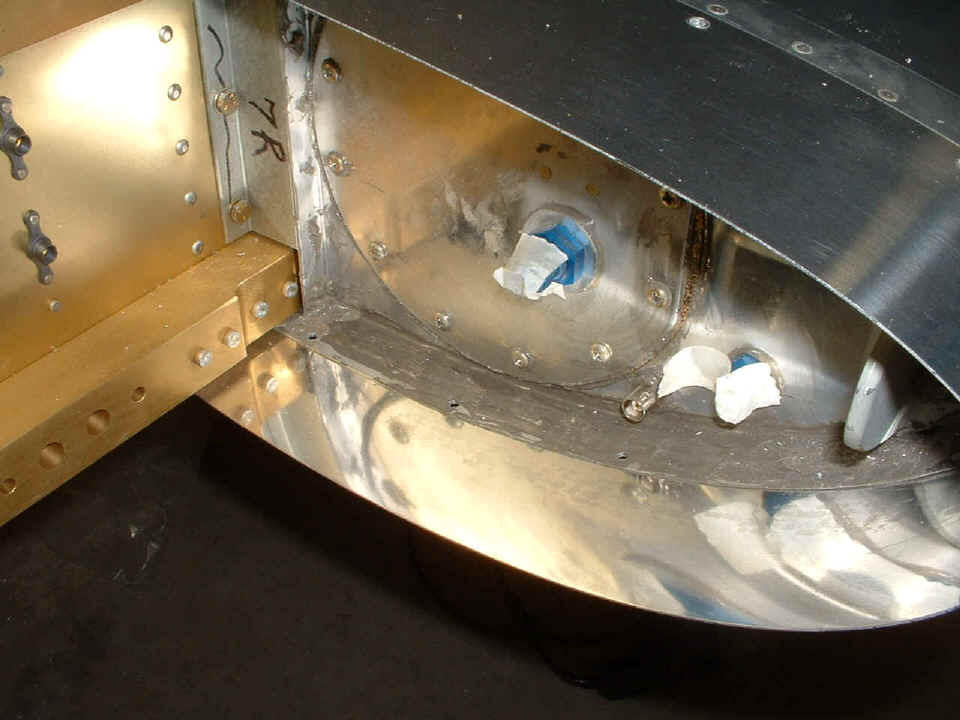 The other thing I realized when I put the platenut in position near the wing spar:  I don't have room to rivet it in place.  That means I get to take the fuel tank off the wing. 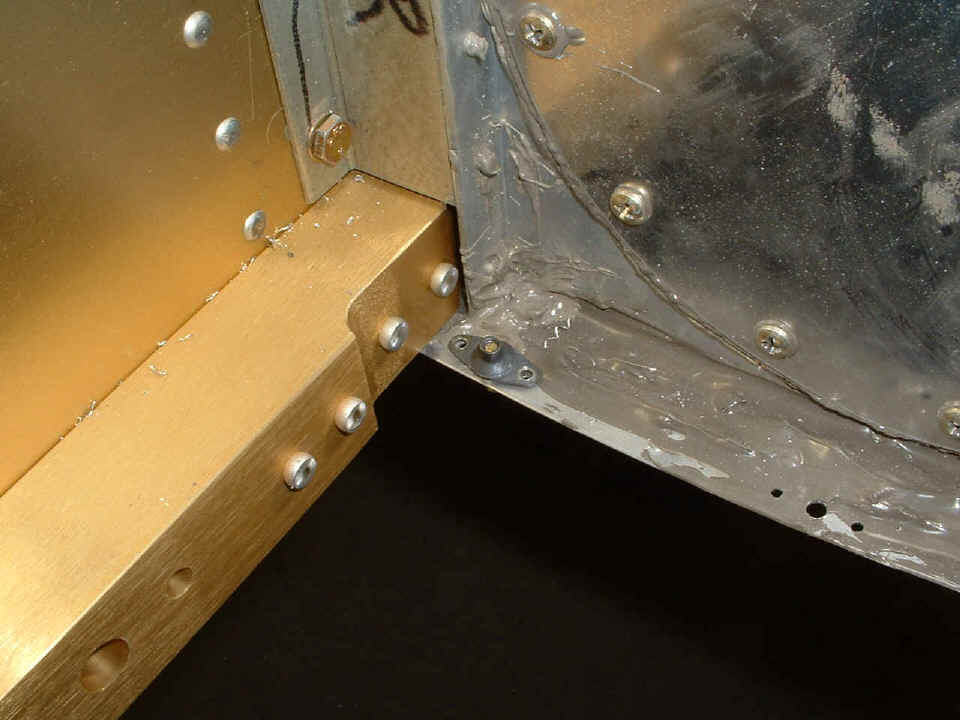 Here is the finished wing root fairing for the RIGHT wing, fully dimpled and ready for priming on the inside.  There is certainly no doubt where the chord line of the wing is located on this thing. 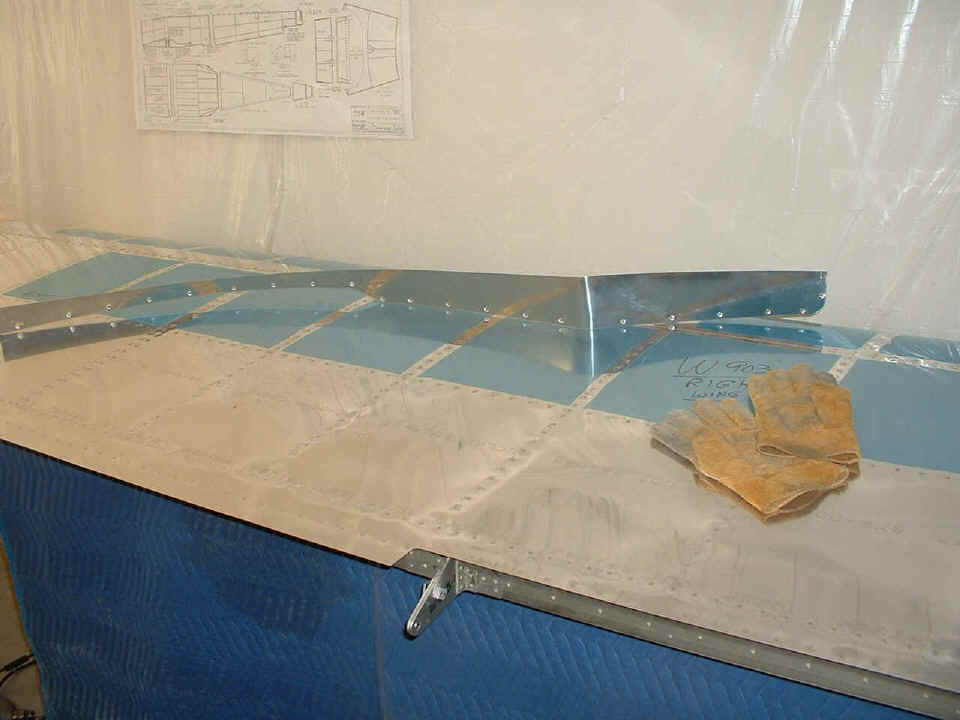 Next task, remove the fuel tank, then put the right wing back on the cart to make way for the LEFT wing on the work table. 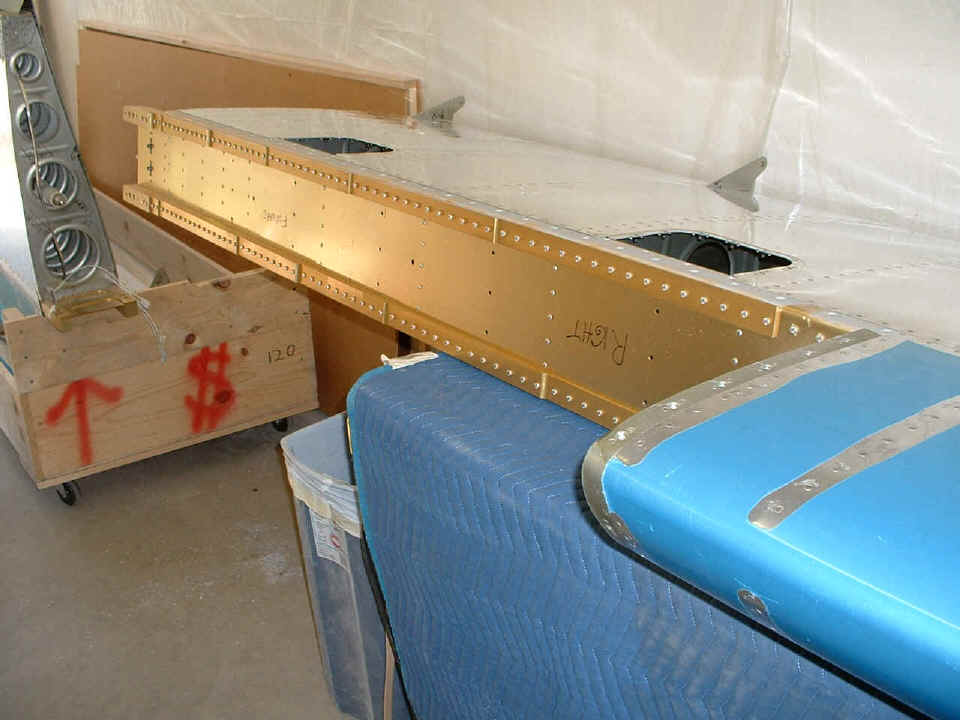