March 10, 2005:  The outside temperature is about 50-degrees Farenheit this afternoon.  While I hoped the temperature would be higher, I put some white silicone RTV into the gap between the windshield and the roll bar. 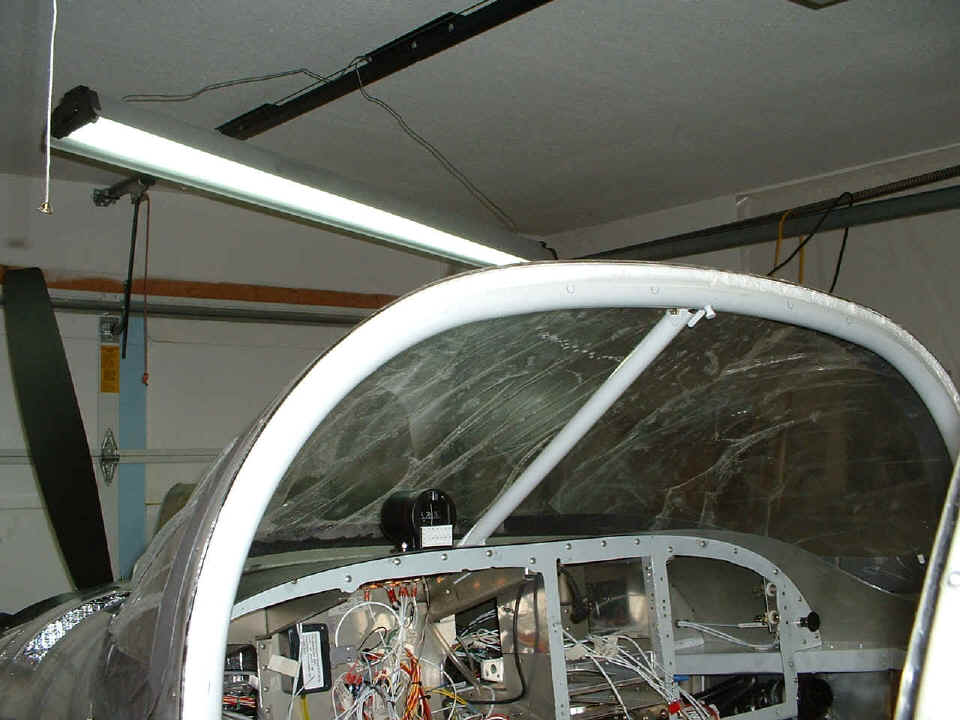 Then I cut some fiberglass cloth strips for use around the windshield and placed them near the "work area" to be reinforced. 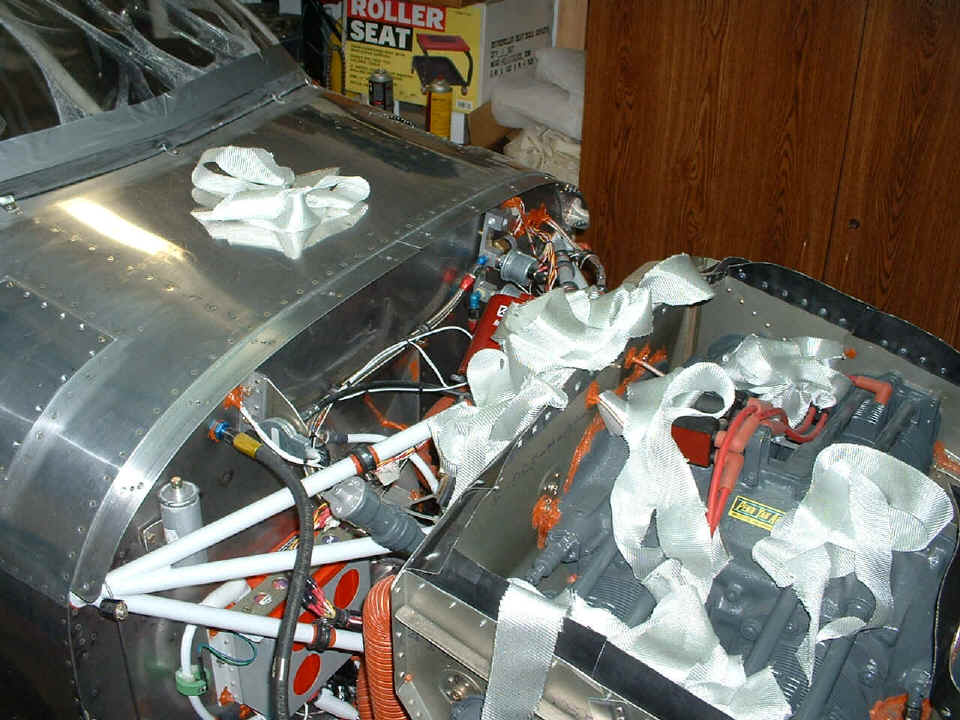 Next, I cut the wider strips of "Peel Ply" Dacron cloth to be applied to the top of the fiberglass layers to keep the top surface smooth.  The round razor "pizza cutter" which works so well on the fiberglass, does absolutely nothing on the Dacron.  This stuff is a fine weave fabric.  I drew a line on it with my Sharpie pen and got out the scissors to cut that stuff.  Now if I only had a bit warmer weather to open the garage door for ventilation. 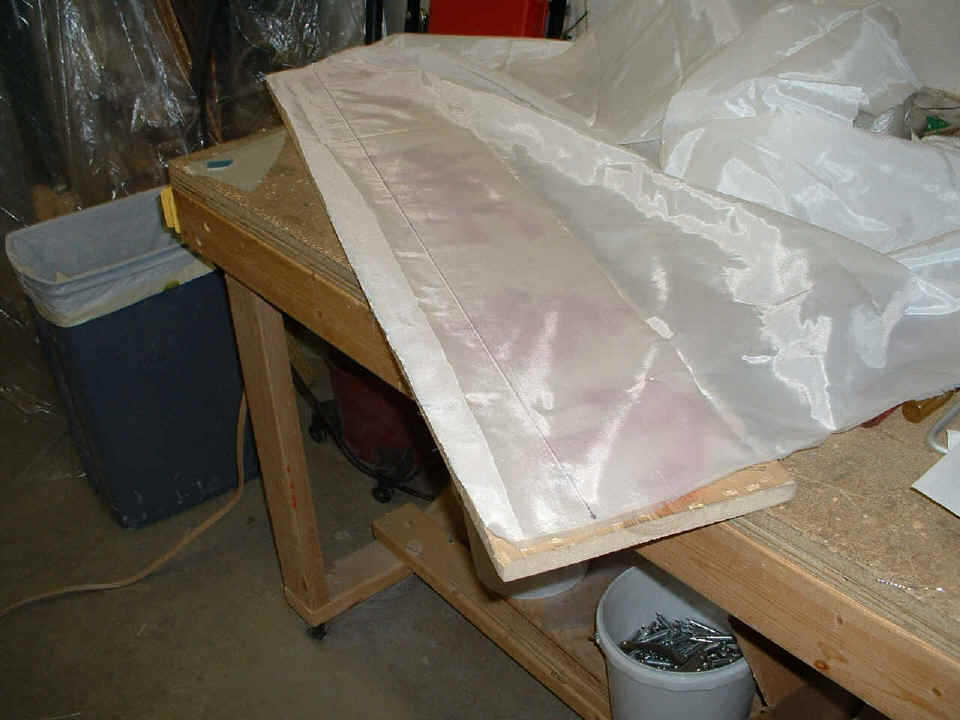 I also went snooping around in my old model airplane boxes looking for a flexible sanding block I used years ago on the models.  I found it and will be putting it to good use when the epoxy and glass are cured.

EVENING SESSION on March 10, 2005:   After working a bit on my commercial web files later in the afternoon (I needed to sit down for a while), I went back to the garage and threw open the door and made my move on the windshield fiberglass work.  I remembered something from my past years in the 1980's working at a factory that made fiberglass satellite antennas.  Lower temperatures slow down the curing of epoxy resins.  Since I had chosen a slow-curing mixture, I ended up with extra time to get the layers of glass on the windshield.   The temperature in the garage with the door open was between 55 and 60 degrees F.   This was the beginning of what would be a three-hour session. 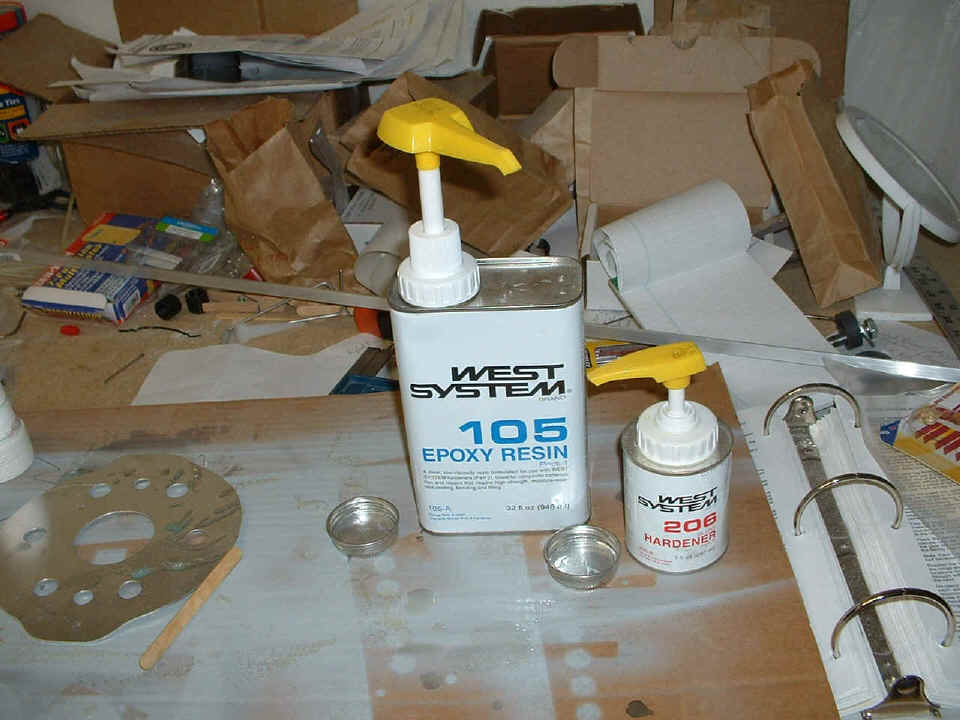 I did not stop to take any pictures when I was putting on the three-plus layers of glass and epoxy.  This shot is taken after all the work is done and the "Peel Ply" Dacron is in place over the top of the glass and epoxy. 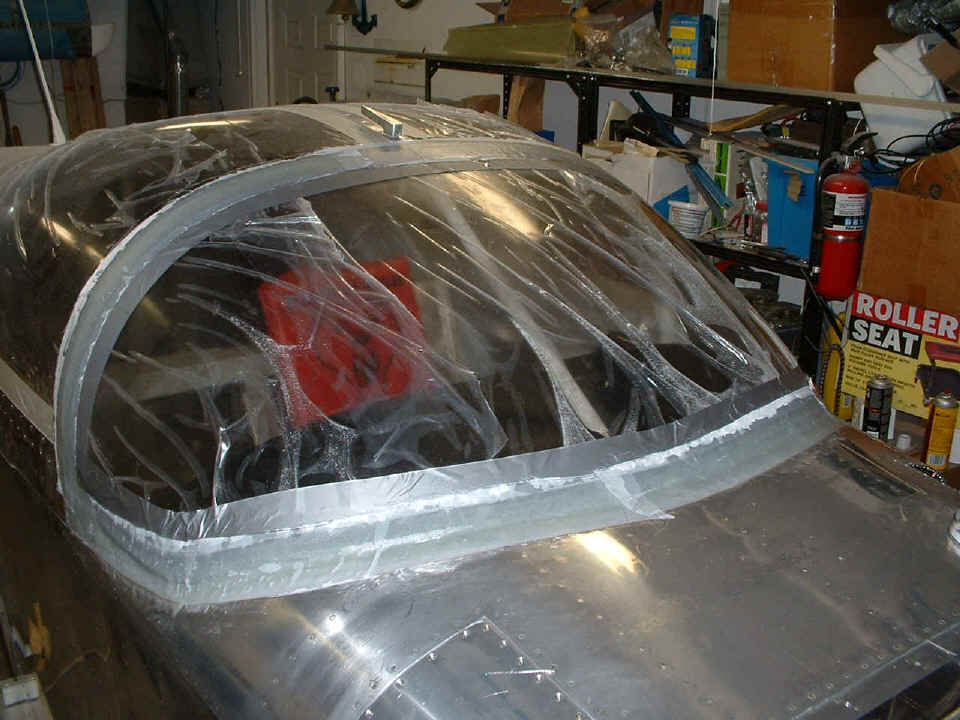 I even took a minute to put some additional epoxy on the sanded layer of glass at the mouth of the carburetor air intake. 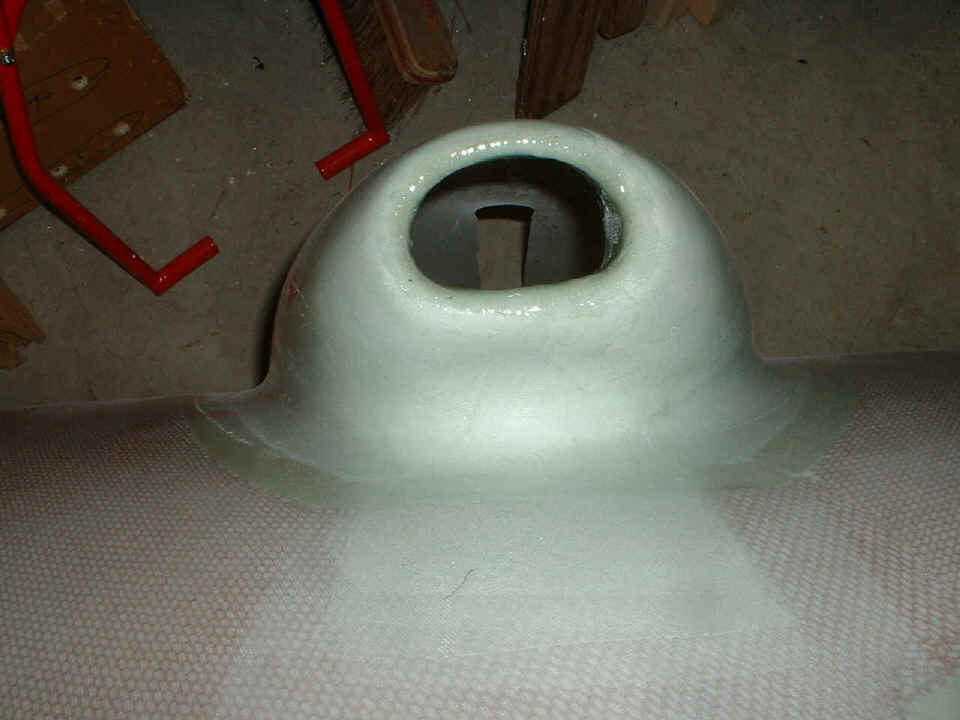 This is a close-up shot of the "peel ply" Dacron on the left corner of the windshield.  Notice how the epoxy is not visible in the Dacron when it overlaps the other pieces of Dacron fabric, only when the Dacron is in contact with the fiberglass layers. 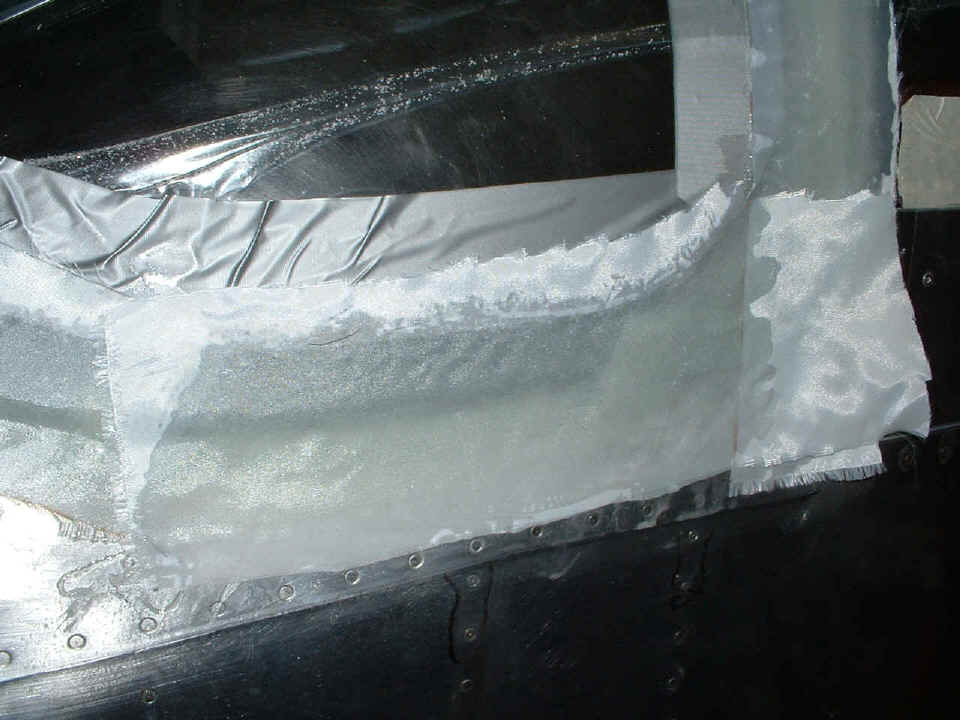 This is the same shot on the other side of the windshield with the canopy overlap layers featured.  When everything is completely cured, the Dacron will be peeled away from the fiberglass, leaving a smoother surface than would have resulted if the Dacron had not been used.  At least that is what Ken Scott told me when I called him on Van's help line the other day.  The idea is that a reduced amount of sanding is needed before I do the next fiberglass session to put on another three layers of glass and epoxy. 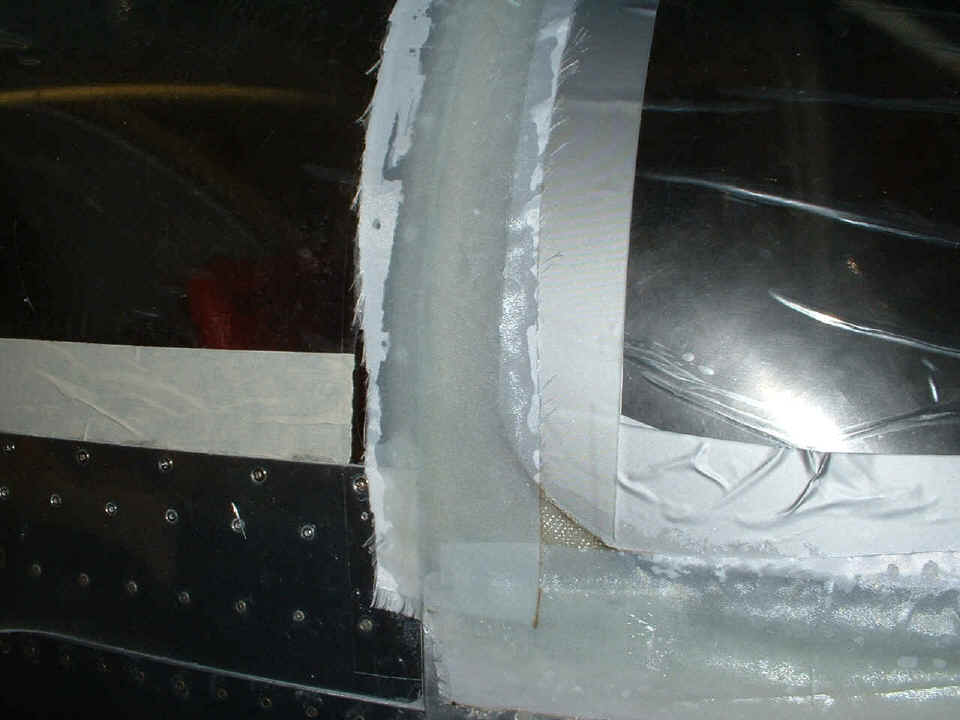 WOW!  Another milestone day and a page filled with eight new pictures!  The deed I feared has come and gone, and now I wait the extended time for the stuff to cure in the lower temperature of the garage.  It is still around 60 degrees out there, and it will probably go down to around 50 degrees by morning.  I am going to give this stuff a couple of days to cure before I go at it again.  Besides, the wheel pants are just aching to get on the airplane next.  I will keep you posted on that in the next session.