March 8, 2005:  This was a day for catch up chores and a visiting pilot wanting to learn about Van's RV-9A.  The visitor was Wendell Folks, a pilot who lives near the Chickamauga National Battlefield Park across the state line in Georgia.  Wendell has a 2500-foot grass strip behind his house, a Cessna 182, and an Aeronca-7AC Champ that was featured on the cover of the EAA September 1996 issue of Sport Aviation.  He was at the Collegedale Airport the other day talking with Rich Nadig, who gave him my number and web site URL.  It was a good way to spend the afternoon cleaning up the garage for the visit, and reviewing all that I have done over the past 28 months.  Wendell is ready to begin the project and asked if I would mentor him as he gets started.  What can I say?  Pay it forward applies here.  Plus he asked me to go flying with him soon.  This is how friendships begin - with common interests.

While Wendell was here, I asked him to help me twist the prop again to verify the clearance of the blades from the spinner cone and the filler plates.  I discovered the filler plates need a little more trimming on the Scotchbrite wheel.   That will come tomorrow afternoon in my next session.

And if that was not enough, I went by the Collegedale Airport and spoke to the airport manager about hangar space.  He indicated there will be space for me there in a larger hangar as one of several airplanes in there.  Things are looking up!  I will be back tomorrow with some pix of the next tasks accomplished on the airplane.

March 9, 2005:  Wednesday!  I worked on some commercial web site files this morning and after lunch the focus turned to the airplane project when the temperature in the garage reached the high-60's.  I had a short visit from local RV-8 builder Larry Champion before he headed back to his office.  He wanted to see the project personally, not just on the web.  He helped me twist the prop after I trimmed the filler plates using the Scotchbrite wheel on the bench grinder.  Both the plates needed one more dimensional tweak at one place near the aft spinner bulkhead.  After he left, my focus turned to the fiberglass gear leg fairings. 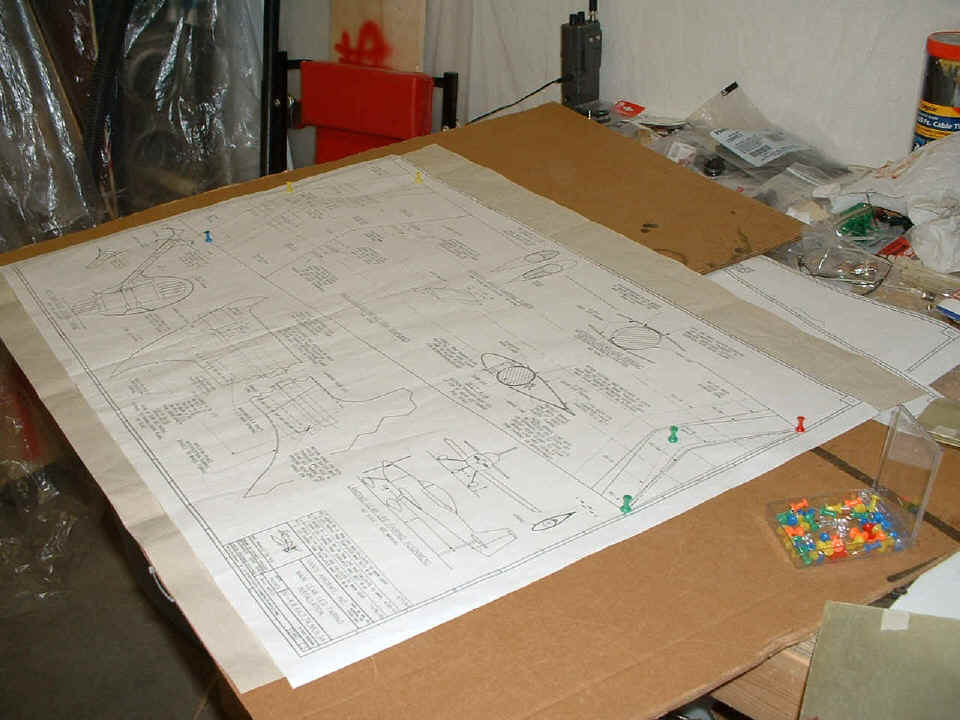 The first step was to create a template from the large drawing C2.  I put a large plain piece of paper behind the print on a piece of corrugated card board and used push-pins at the key points on the drawing that also went through the plain paper underneath.  Both the cardboard and the paper were received as packing material with the airplane kit.  Think about how you can use that stuff before you give it to the garbage man.  Right now, I can see ONE more aluminum priming session coming to a driveway near me using that paper to catch the overspray.

Next is connect the pin holes with a ball point pen and a straight edge to finish the template.  It will be used to cut the fiberglass gear leg fairings to the correct size. 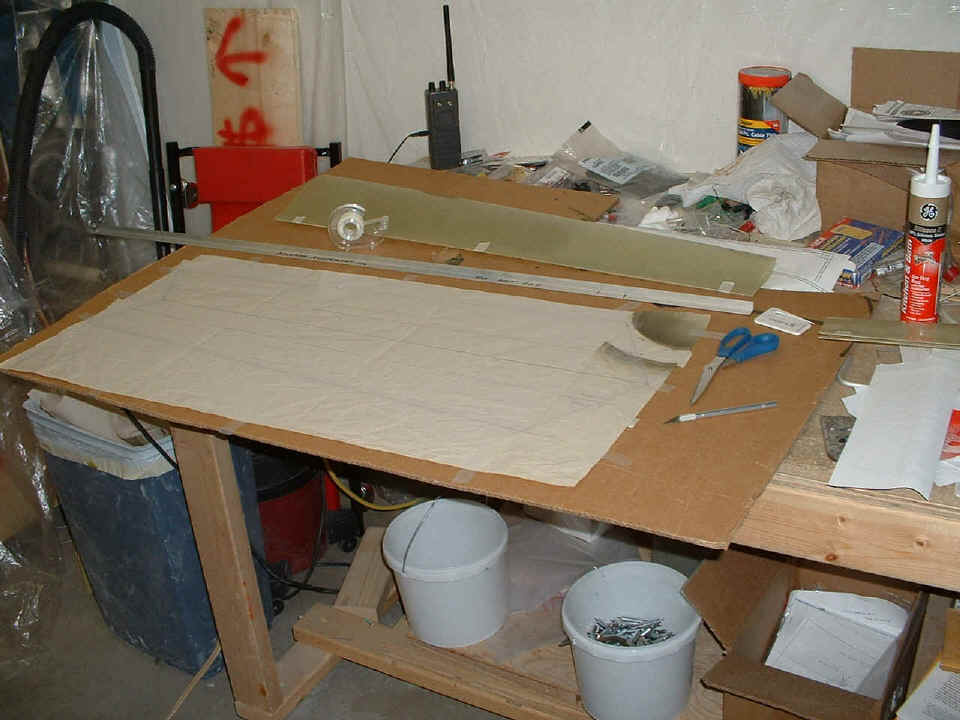 Since the paper used was light weight, I reinforced all the borders with clear Scotch tape before cutting out the template.  The push pins also helped to keep the straight edge in the correct position when cutting the paper template with an Exacto knife.  With the clear tape on all the cut lines, there was no tearing of the paper as the blade tracked its outlines. 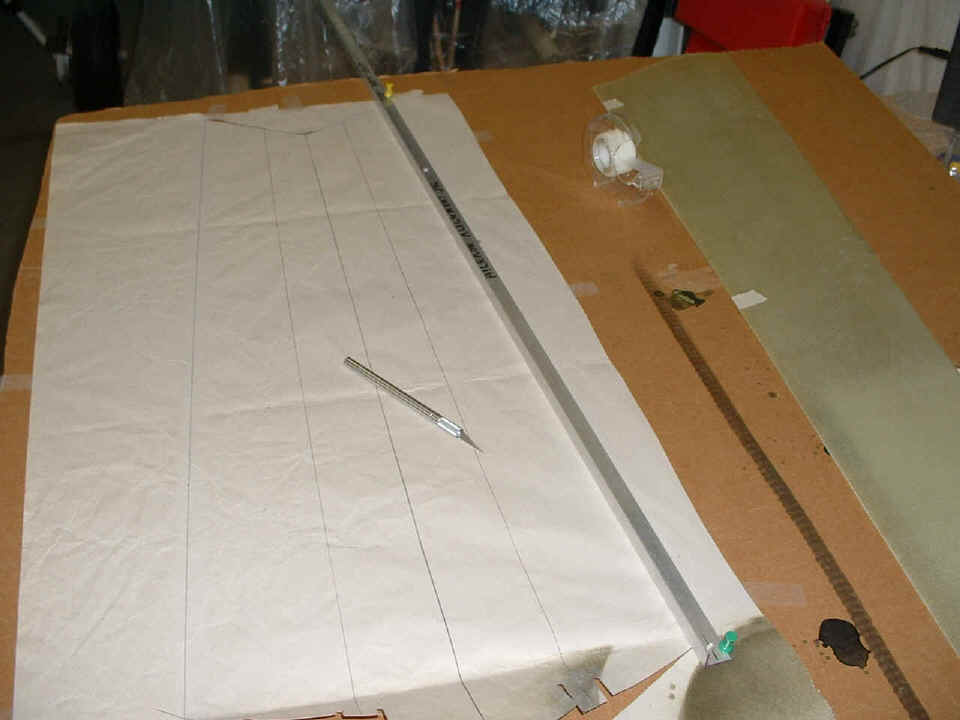 Here is the template, ready for use on the main gear leg fiberglass fairings from the kit.  The centerline is used as a guide to where the template gets taped onto the fiberglass. 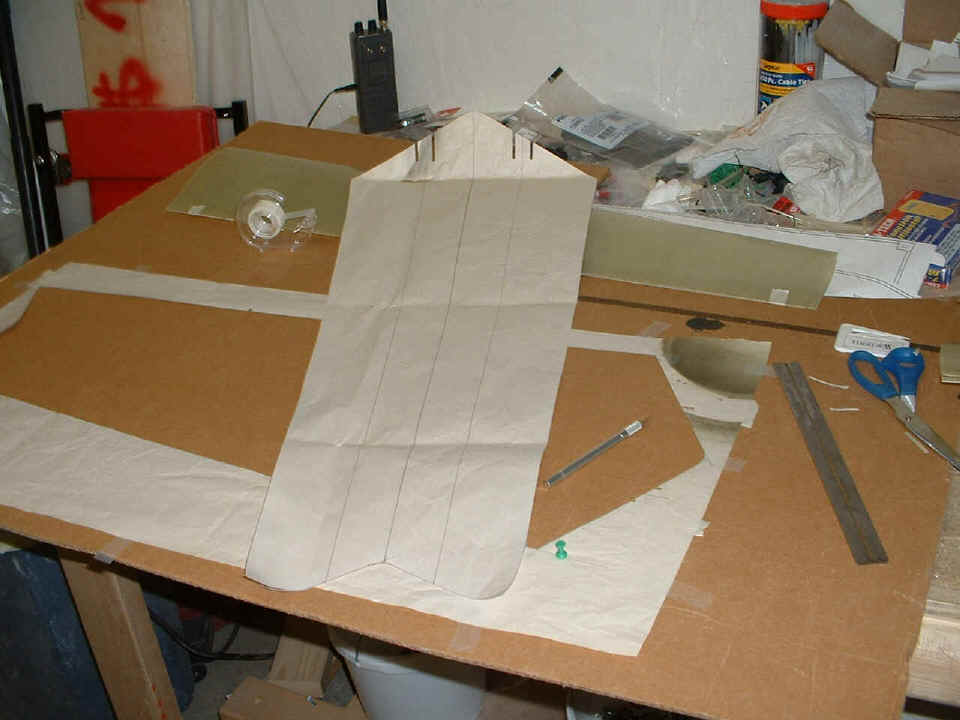 Masking tape was added to to the fiberglass fairing before the template was put on.  That insures proper alignment (no twist of the fiberglass) before tracing the trim lines from the template.  The notches will have a hose clamp to secure the fairing to the steel gear leg at the fuselage end. 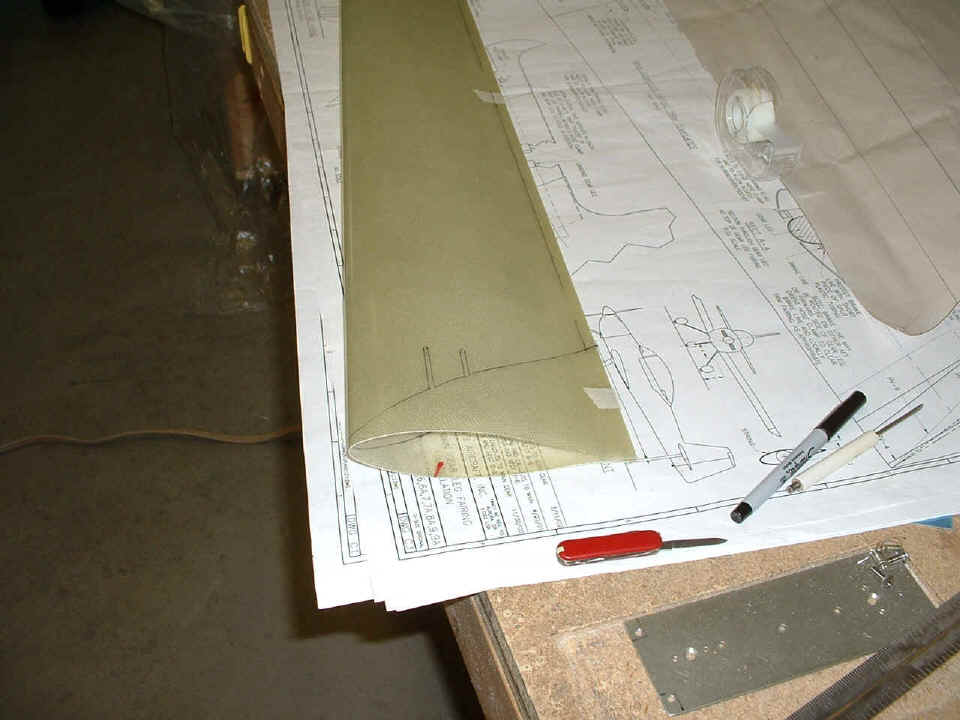 The tin snips came next to cut "way outside the lines" since the snips fracture the glass fibers and the epoxy resin. 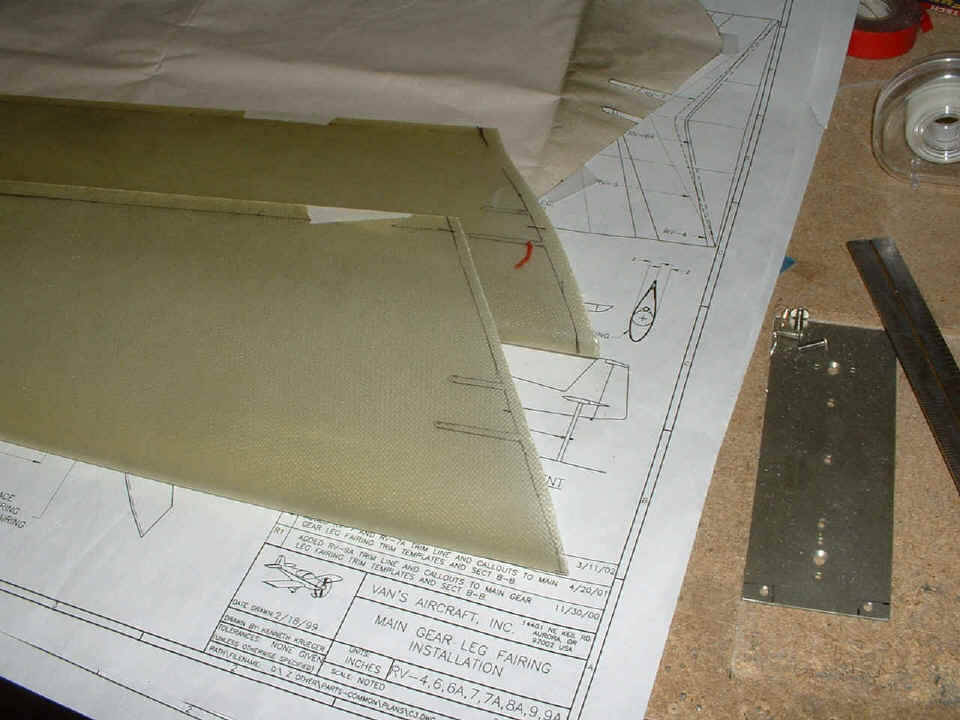 The Dremel sanding drum makes short work of the excess fiberglass.  I tried the fairings on the main landing gear legs for size and realized I made RV-9 fairings, instead of RV-9A gear leg fairings.  Since the main landing gear legs are shorter on the RV-9A, the fairings had to be shorter.  I considered the first try a good practice and quickly cut the template down to the correct size and repeated the process. 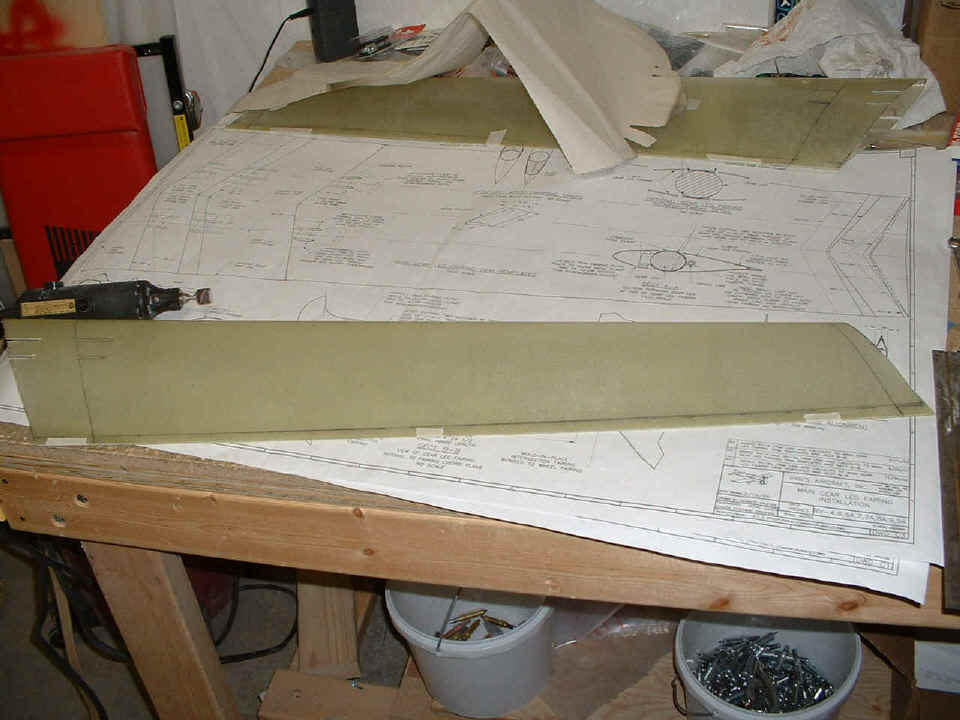 Here is the first fairing on the gear leg to discover just how much I needed to reshape the brake line for clearance. 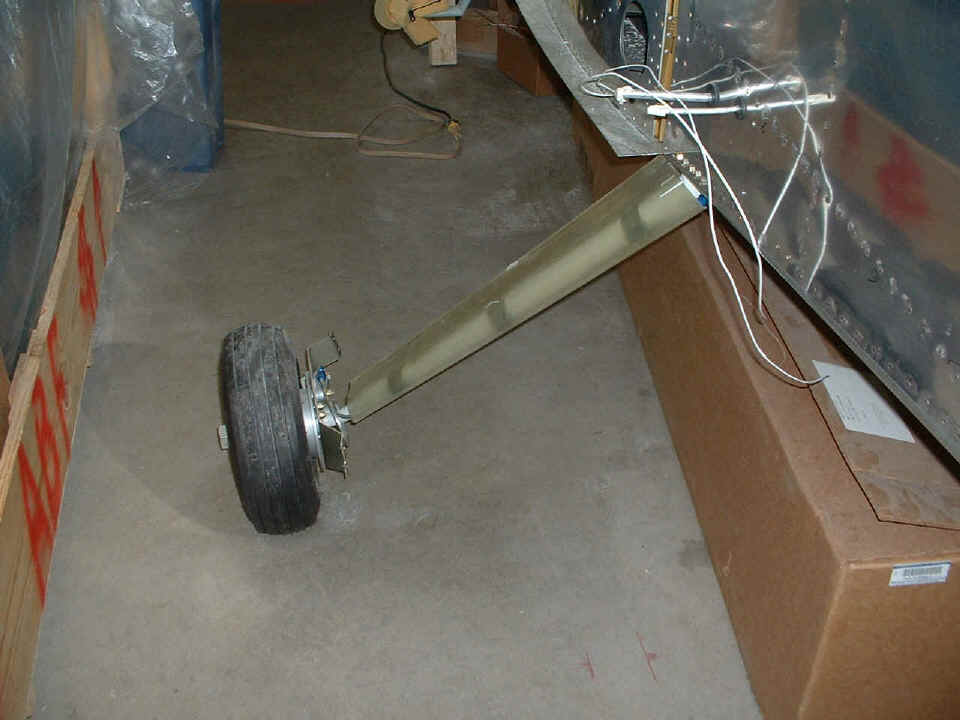 The second fairing  went on the LEFT gear leg and I got out the intersection fairings from Fairings-Etc. to try one on for size.  I won't be able to attach the upper gear leg intersection fairings until the wings are attached.  This quick fit confirmed that I do not need to trim the aft edge of the gear leg fairings, just the lower end to clear the wheel pants.  Yes, I got out the wheel pants and took a look at them, but since they need some trimming before they will clear the tires, I figured that was a good place to stop for the night.  More tomorrow! 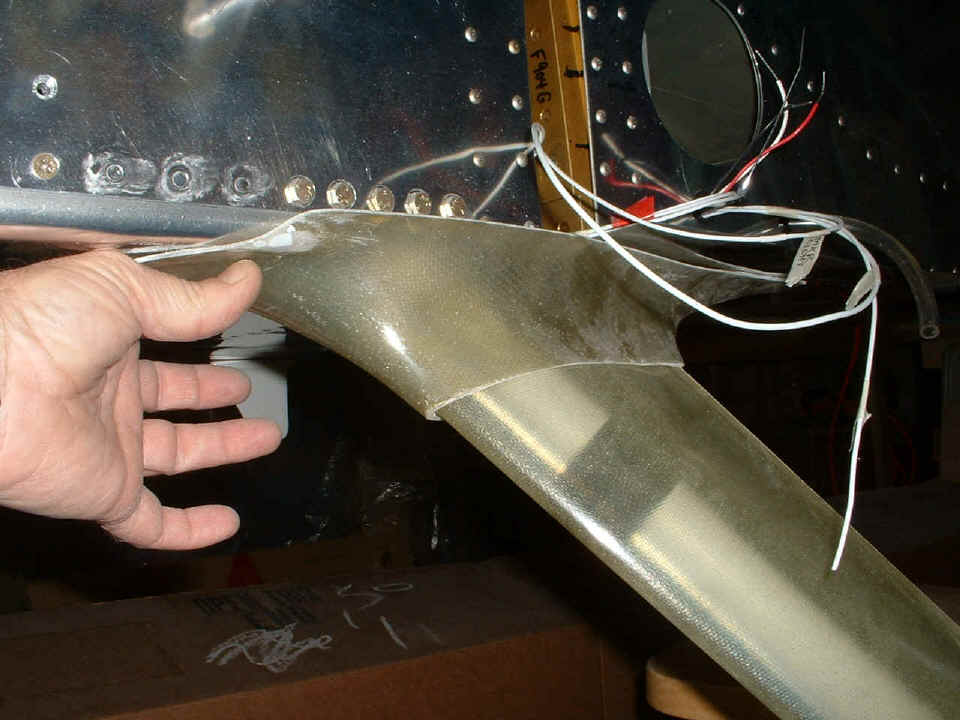 Nine pictures today, all about gear leg fairings, etc.  Although I did a few minutes work getting the final trim on the prop filler plates, I did not think we needed another picture similar to the one on page 100 under the March 7th heading.   And yes, I keep putting off the fiberglass work on the windshield hoping for better temperatures needed to open the garage door for ventilation.  Let's see what happens tomorrow on page 102.