January 5, 2005:  Continuing the work this evening, I drilled the holes for the individual avionics circuit breakers.  I put angles and side plates on the RIGHT panel to mount the CD/Tape player unit securely.   The big round hole is the location of the Hobbs meter.  I think there is still room enough there to put in an XM satellite radio if the mood strikes me. 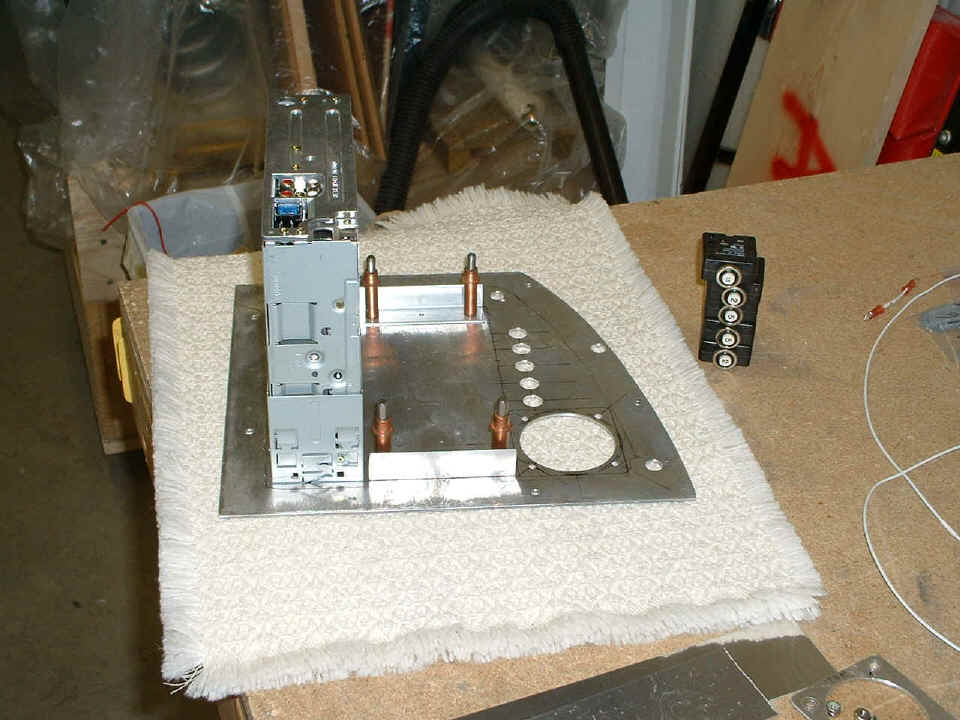 Here is the finished audio project with a deburring tool under the chassis to prop the right panel up into something resembling normal position.  Both side plates are riveted to the side of the two angles shown clecoed in postion in the above photo.   The bottom of each side plate is riveted to an 0.062" aluminum angle on each side of the radio chassis, and a brace plate runs across the bottom between the angles. 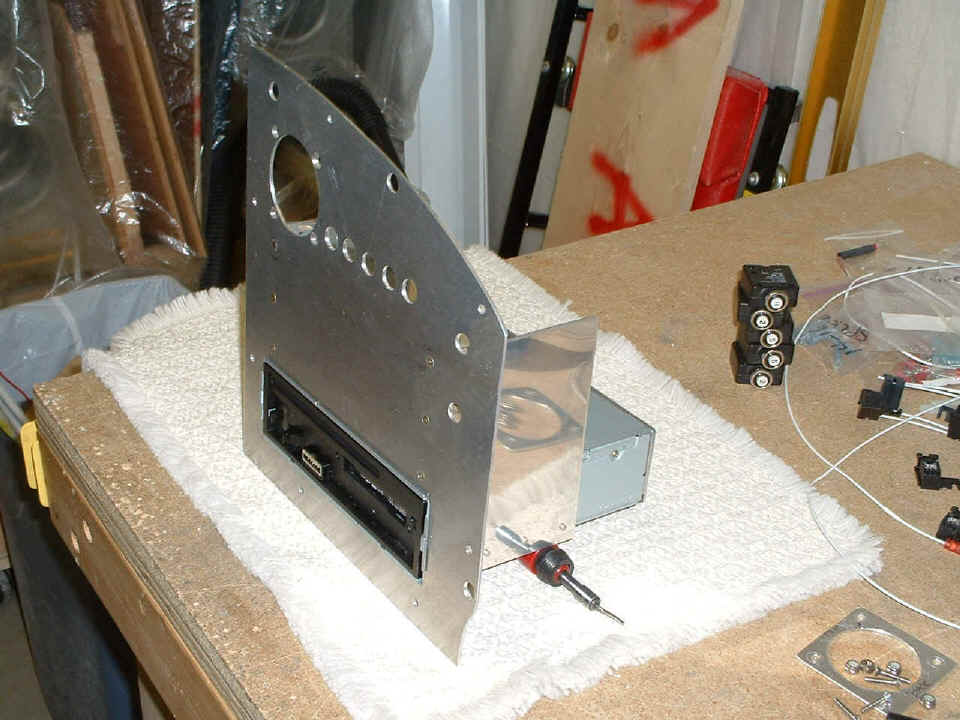 The next time you see this thing, it will be painted pewter gray with everything in its proper place.

Janurary 6, 2005:  The focus this evening was on the Light Speed Engineering solid-state ignition module.  I ran the shielded power cables to the battery via the pullable circuit breaker that was also moved to the LEFT switch panel.  I called Light Speed to verify something that was confusing about their optional "P-lead" wiring and where ground connections should be made.   I was assured that the "P-lead" function on their 15-pin D-sub connector would turn OFF the LSE module when I use the key switch to test the MAG and the solid-state ignition on engine runup.  You can see I have changed the switch labels AGAIN.  At least this time, I did not have to repaint the switch panel. 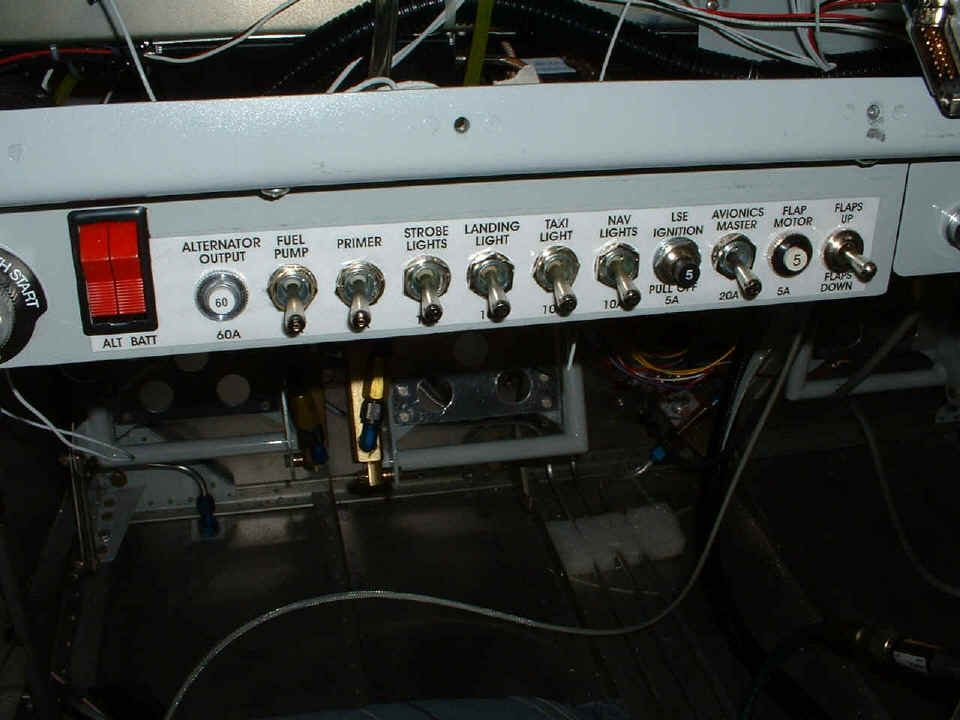 Here is one end of the LSE module with both D-sub connectors visible and the yellow plastic manifold pressure line connected.  The connector on the left has the shielded white power cables and the gray crank angle sensor cable going into it.  The connector on the right is the one with the "P-Lead" that connects to the starter switch on the LEFT switch panel.  The two beige coax wires come from the other end of the LSE module and run to the high-voltage coils on top of the engine.  I will be connecting those soon.  The LSE module is secured to a mounting plate with screws and can be removed for service if needed. 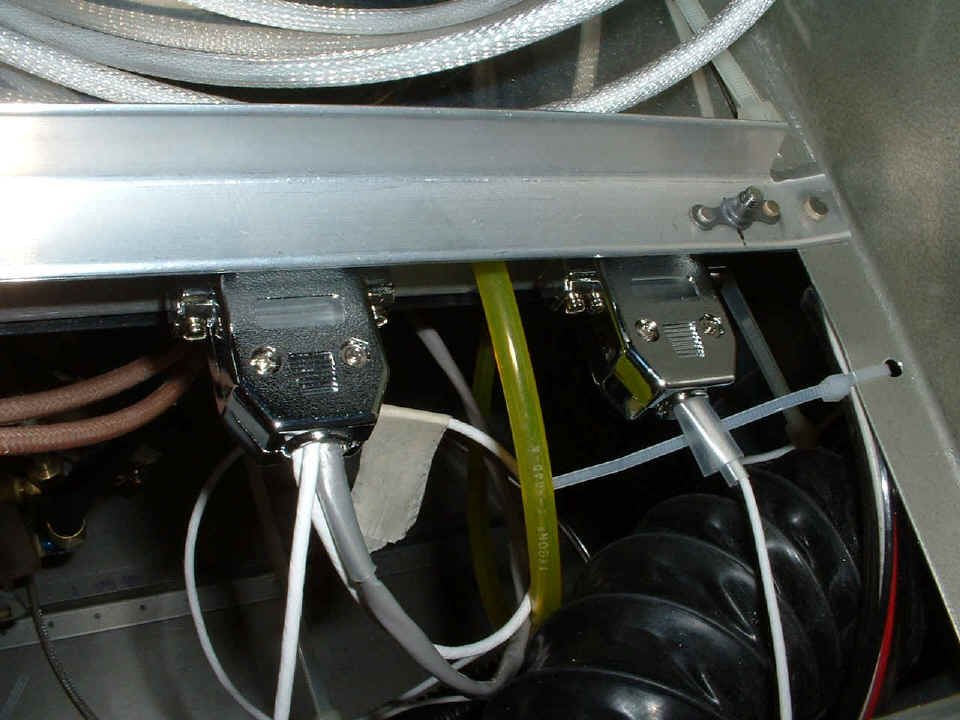 While I was working on the starter switch, I put the MAG "P-Lead" on the switch and routed the wire through the firewall to be connected to the magneto in the next work session.  You may see some masking tape on wires here and there.   Those are my labels reminding me what the wire is and where it is going.  The one in the photo above has the writing on the other side.

I also painted the right main instrument panel that I worked on yesterday.   It is still drying in the garage and won't get anything put into it for at least another day, probably on Sunday when the paint is good and hard.

The US mail delivered my box from Van's with the replacement GLASS red lens for the Whelen LEFT marker light.  The stainless steel pitot tube was also in the box and is much more substantial than the one I had made from soft aluminum tubing per the plans.   It came with a RED pitot cover to keep bugs out when tied down or in a hangar -- to be removed before flight of course!

January 7, 2005:  I put the LED lights up in the top of the baggage area.  You can see that I have added a 1/4" rubber grommet in a 3/8" hole I enlarged with my unibit.  I put a screw in an existing hole where the two bulkhead halves are joined to act as a ground point for the negative leads from the two LED strings.  I taped the positive wire down the back side of the aluminum angle that is part of the F-728 bellcrank channel.  I turned off all the lights in the garage and checked out the available light from the six LED's.  It looks like this is a good idea.  I could add more on the bottom of the seat back bulkhead and may do so as the project progresses.  Each string of THREE series-wired white LED's needs around 65 mA of current from the 12-volt system. 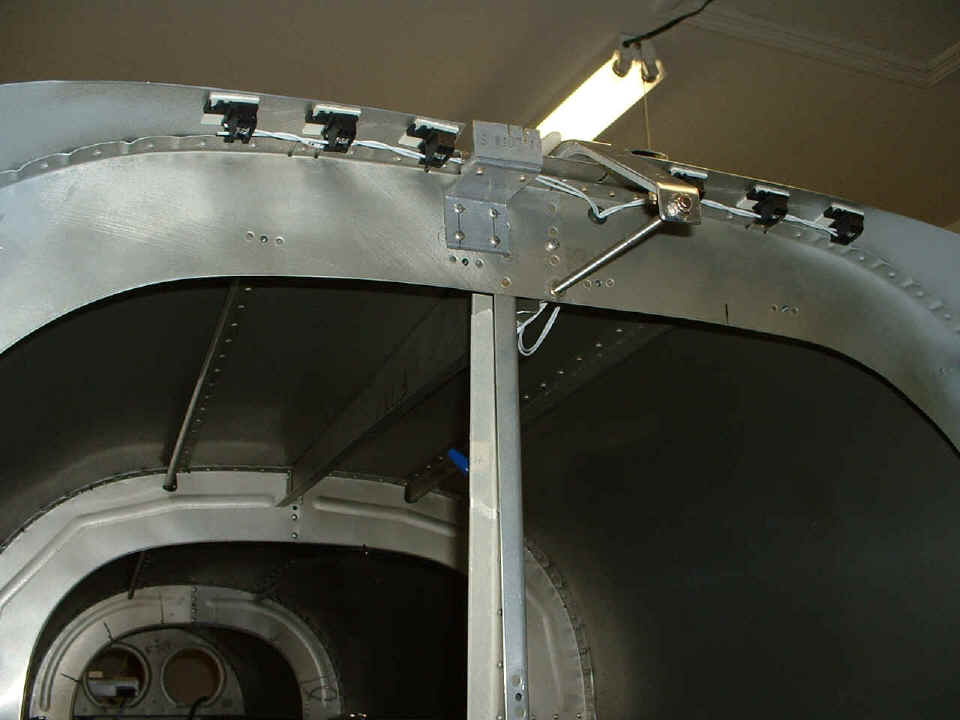 I put the Whelen strobe power supply on the back of the F-651 lower baggage bulkhead and wired its power plug into the airplane.  I took this picture while my soldering iron was heating up.  The black wire is crimped and soldered to the ground lug that I later secured to the F-728 bellcrank channel at the nut that holds the elevator bellcrank in place. 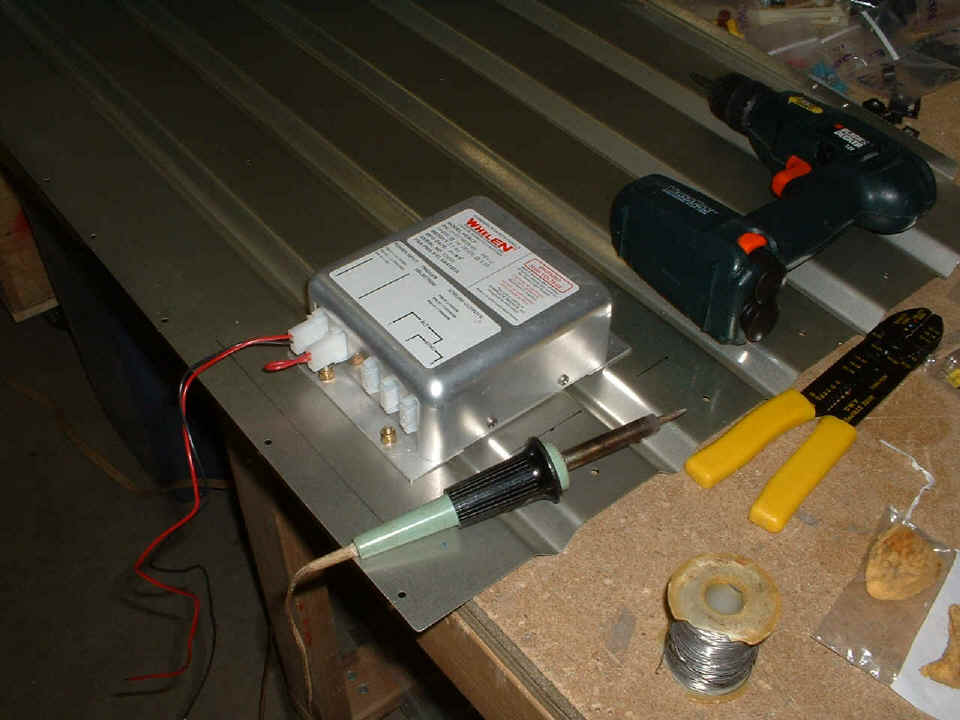 January 8, 2005:  This was a Saturday and a day to work a couple of sessions on the airplane.  As I said a few days ago, this panel would be all dressed up for its next picture.  I still see the possibility of a few more breakers here, but that will be determined later.  Once I got this panel installed, it was time to start the wiring harness using the Molex connectors I bought recently.  In case you may have forgotten, that round black knob at the far right edge of the photo is the cabin heat door control.  I suppose it is time to put a label there. 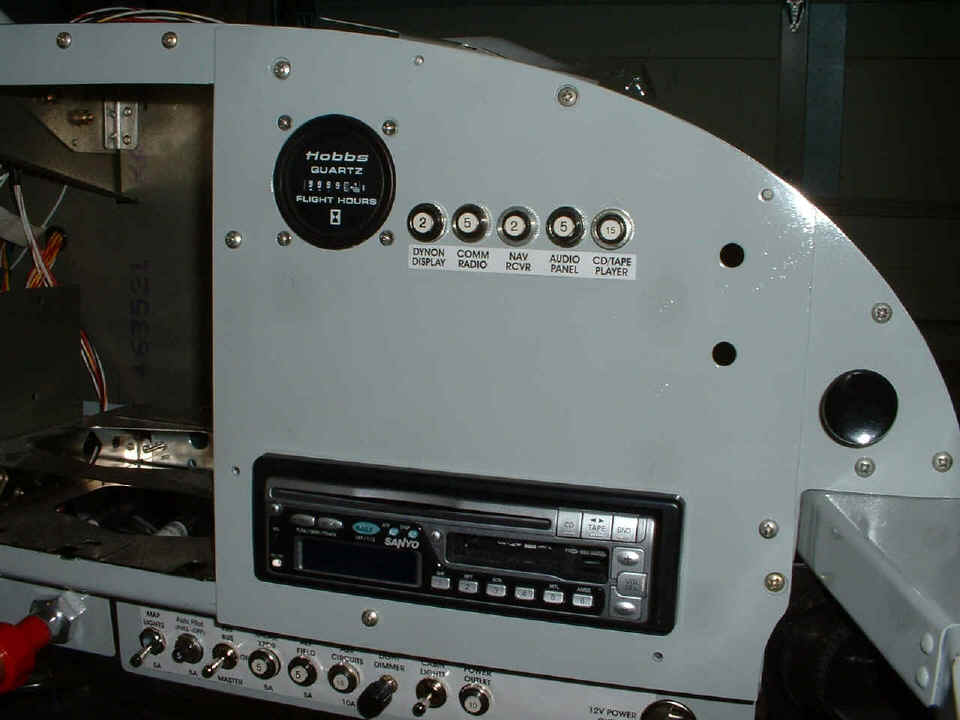 Here is the view behind the panel shown above.  I wired the male Molex connector and harness to the breakers and the CD/Tape player while the panel was on the bench.  I put the panel in the plane and started to wire the connections I could make today.  This pad has more notes on it at the end of the day as I write this to share with all of you.  At the time I had taken this photo, there were only five wires connected on the airplane side of the wiring harness.  When the COM/NAV radio and audio panel arrive, I will be able to complete the connections. 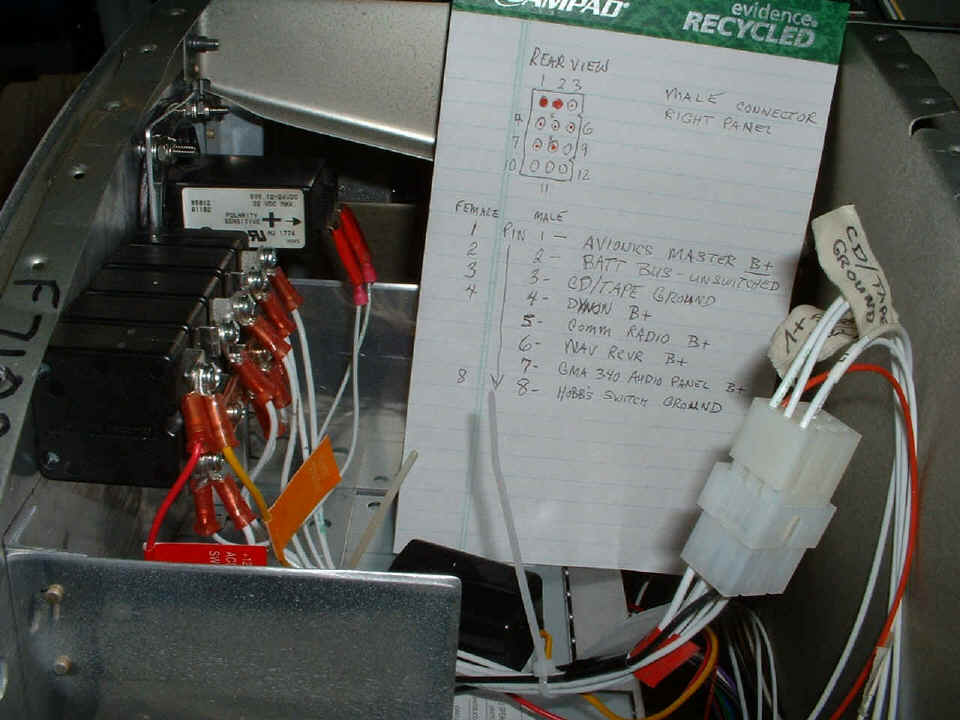 I powered up the CD/Tape player, but have not hooked up the headphones to the line outputs.  The speaker connections will never be used.  I also wired up the Hobbs meter.  It currently has 9999.9 hours on it, ready to roll over when I get to the airport before the first engine start.  Since I could not wire up things that are not on hand, I started to wire up sensors to the Grand Rapids Technologies Engine Information System.  Those pictures begin on the next page.