December 25, 2004:  Christmas Day!  I had dinner with my sister and her clan on the 23rd, so today was my day off to do you know what!!  I put in 6.3 hours today and there were some symbolic milestones.  I took off the cowl and put it away in the kitchen behind my table that is rarely used for eating.  Living solo, the TV tray is the dining table here.

I vacuumed aluminum shavings off the engine as a result of recent cooling baffle work.  I then started to tick off some items on my "hit list" of things that I have been putting off while finishing up the cooling baffles.  The first thing I wanted to fix was the vertical position of the fuel flow sensor on the firewall.  To do that, I needed to make a couple of spacers to fit the 1/4x20 stainless steel bolts that secure the sensor.  This is one of the spacers chucked into the drill press to mill the ends square and smooth on a flat file clamped to the drill press table. 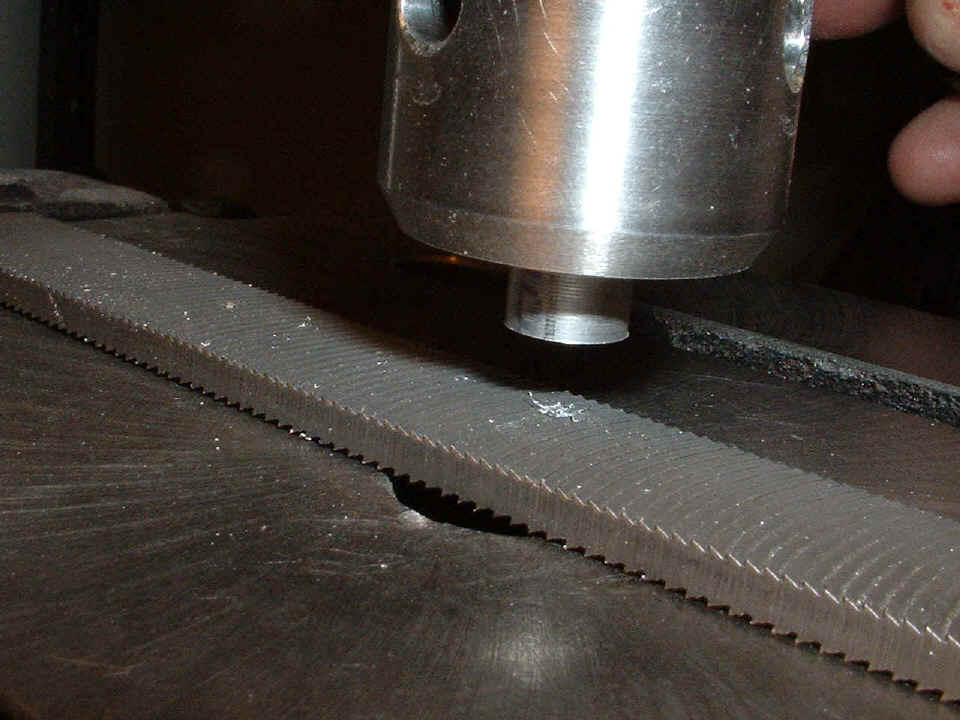 This view shows the finished spacers and a better view of how I held the file in place on the drill press.  The 6061-T6 aluminum tube used to make the spacers is part of the kit from Van's.  I seem to have plenty of it left over for now. 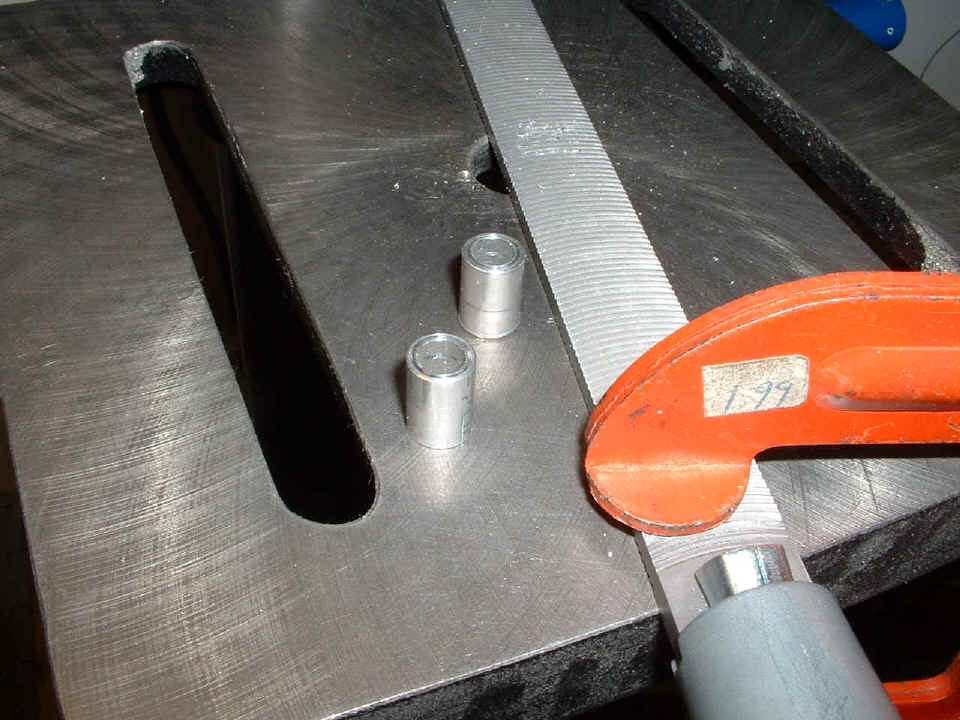 Here is where those spacers went, under the fuel flow sensor, on the top side of the angle, mounted on the firewall. 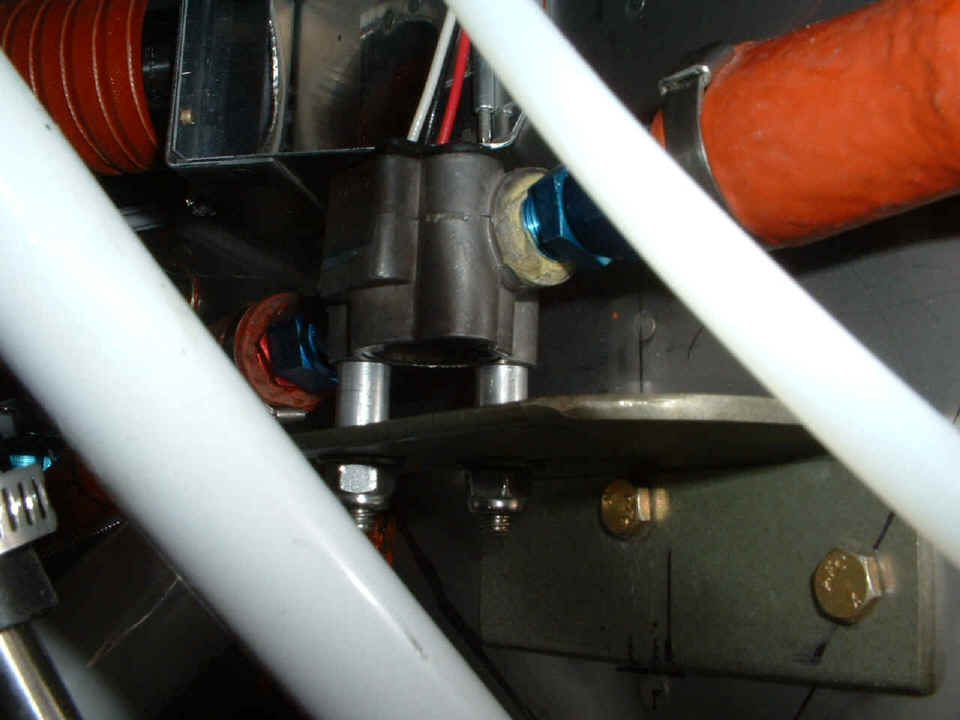 This view should show why I wanted it raised.  The fuel line coming from the gascolator to the sensor was hard against the nose gear leg socket.  The fuel line is now centered between the throttle cable and the carb heat control cable.   Looking at this photo, it just occurred to me that I may need to put an aluminum plate on the bottom of the cabin heat door assembly to make sure the waste heat is blown away from the fuel flow sensor.  The alternative is to mount the sensor inside the cabin if space is available. 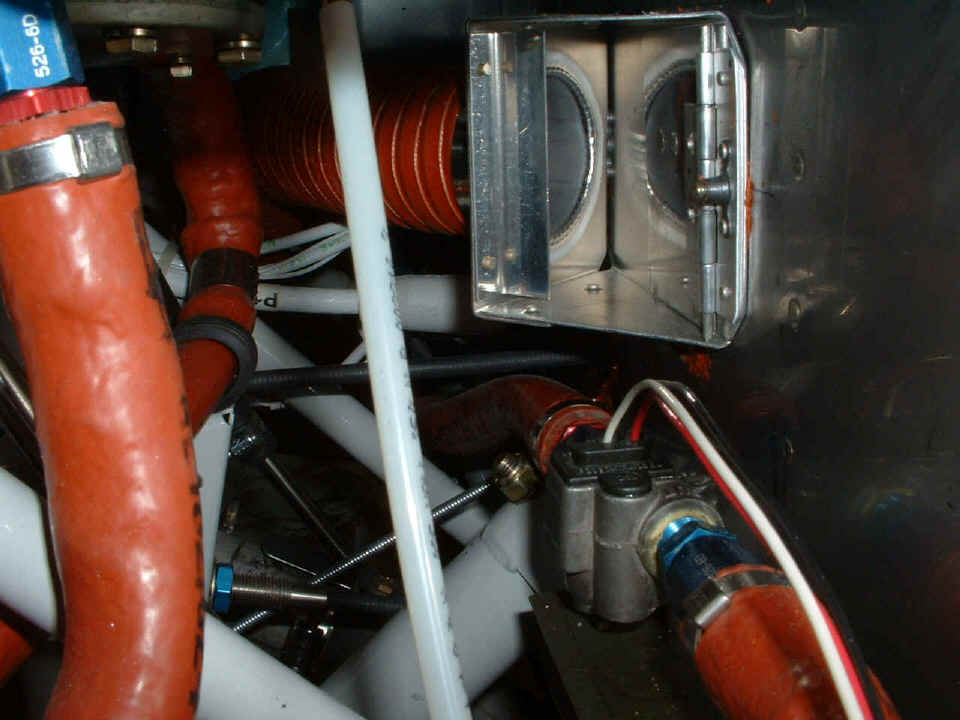 After finishing the fuel sensor changes, I turned my attention inside the cabin and began the wiring process.  With the instruments out of the way, it is fairly easy to start running light wires.  I have skipped the fuel pump and primer for now.   I also cut the copper buss bar from the master circuit before it reached the avionics master switch breaker.  I decided I would wire it directly to the battery on the hot side of the master solenoid.  That change will provide power from the battery to the radios if I have to cut the master switch for any reason.  I realized that the GREEN LED on the panel will now be wired to the Avionics Master switch as a reminder during shut down at the end of each flight.  When I put in the fuseable link on that new cable from the battery, it will also be connected to some of the breakers on the right panel for solid-state ignition, etc. 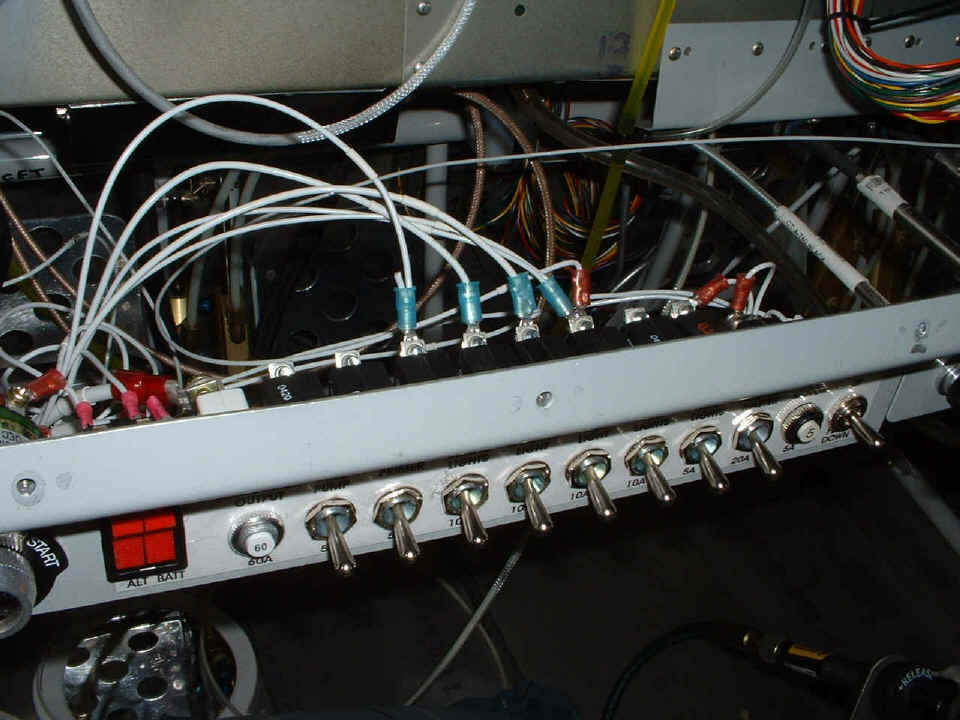 I put the F982 center cabin cover in place a bit prematurely as it turns out.   It fits, almost.  There is some minor trimming needed to clear the cabin heat control cable.  I have a wire or two that needs to be added to the bundle running under there.  Right now, wires for power to the strobe light power supply, the landing and taxi lights, and nav lights are all in place.  And I connected the elevator trim cable to the control knob! 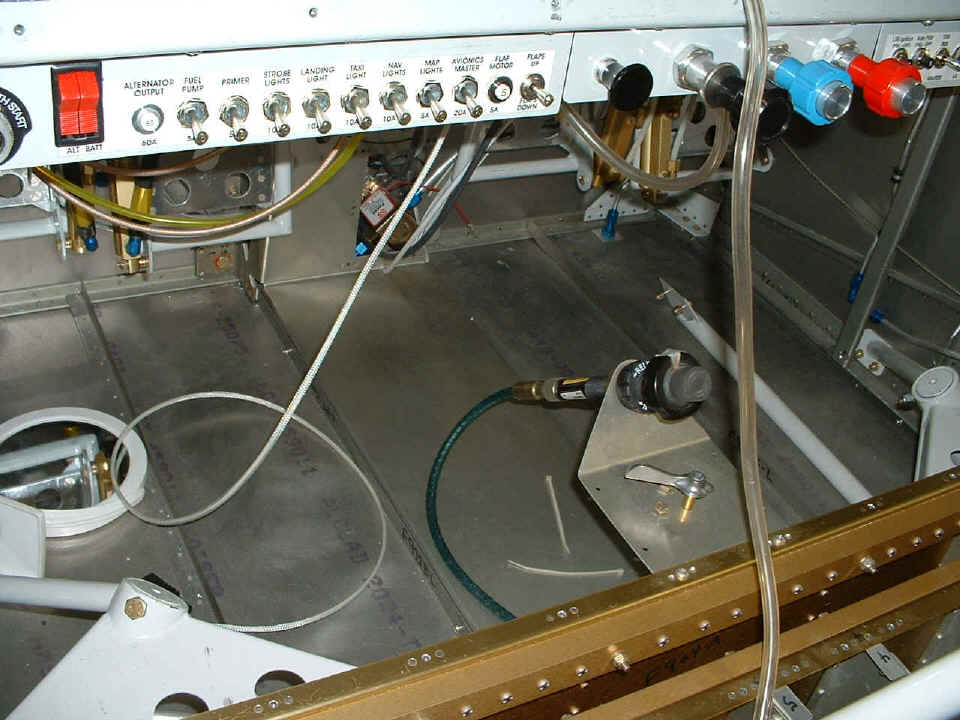 The wires hanging out on the left side will attach to the landing light and the nav light in the wing.  The third wire is the wire going to the white light in the tail.  Splicing it here saved me from adding another wire to the flexible conduit behind the instrument panel.  There are also wires hanging out of the right side of the fuselage to go into that wing.  When I was looking at them, I realized that I have some additional access holes to drill through the main wing spar carry-through for passage of the two pitot pressure lines for the Lift Reserve Indicator.  I also have to drill an access hole for the main pitot tube on the LEFT side.  I removed the wooden spacer blocks from the wing spar carry-through assembly. 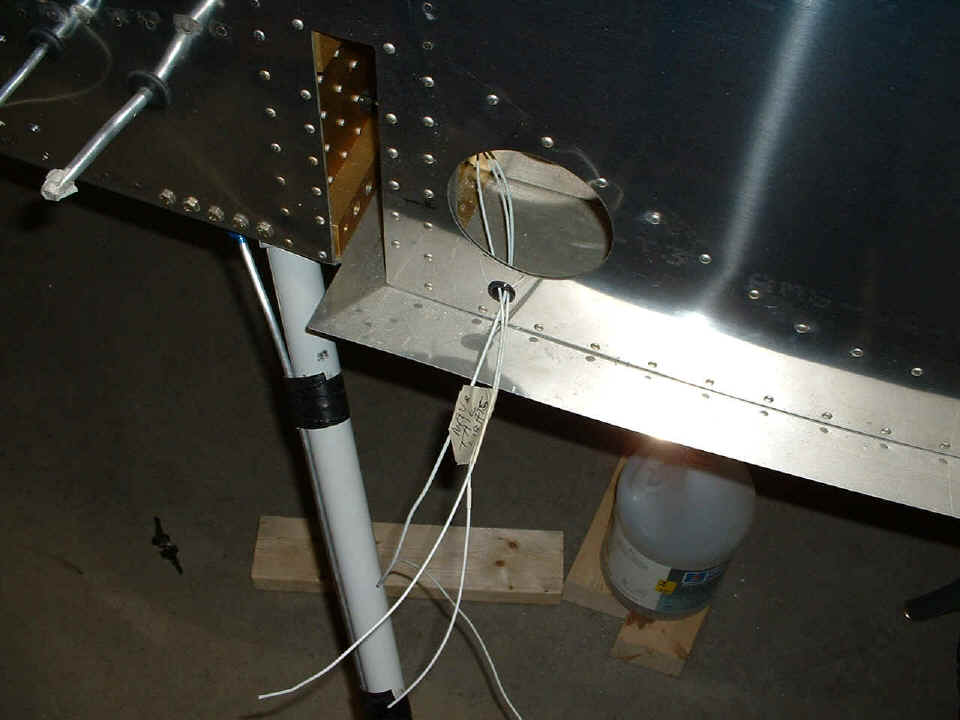 I also routed the serial cable from the Dynon harness to the aft deck location where the remote compass sensor will be mounted.  As part of the wiring in the tail cone, I put the wire in going to the white tail light while I was inside the fuselage tail cone. 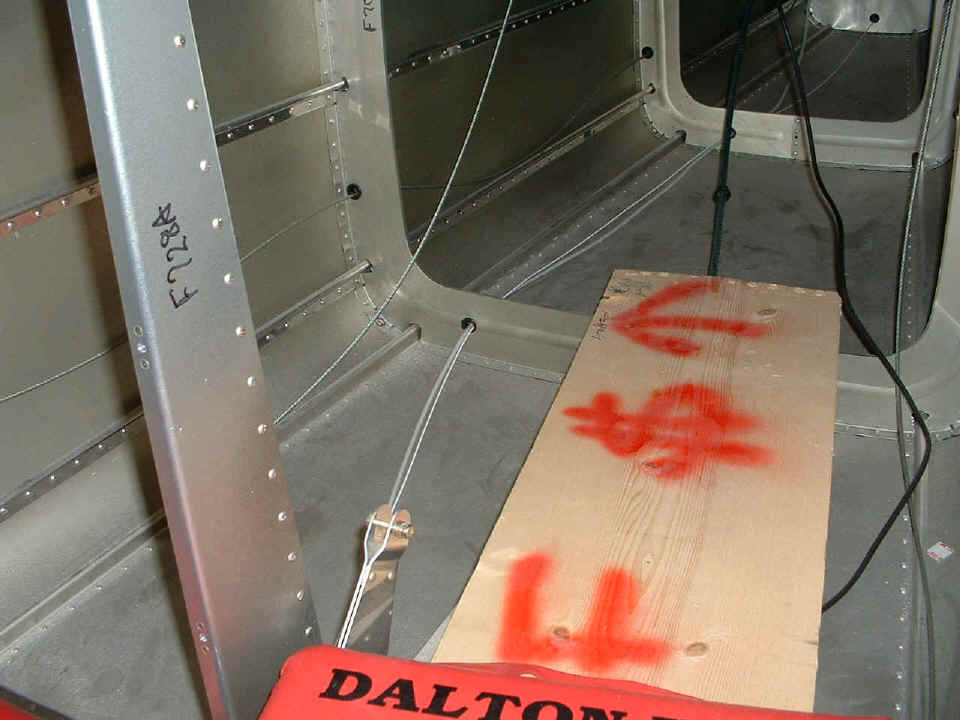 The Christmas present to me today was to get started on the wiring and get away from the engine details for a while.  Getting in the aft section is still a contortionist movement for my large-bone-structured body.  One of these days, I will have a visitor over and get a photo of me getting in the area you see above.