November 18, 2004:  This may be another milestone day, I think...   I won't know until I am absolutely sure there are no more aluminum parts that need to be spray primed.  I looked around the shop and could not find anything else aluminum that would become a permanent part of the airplane.   Looking at this photo, you can see the whole pile of stuff that got sprayed green this afternoon. 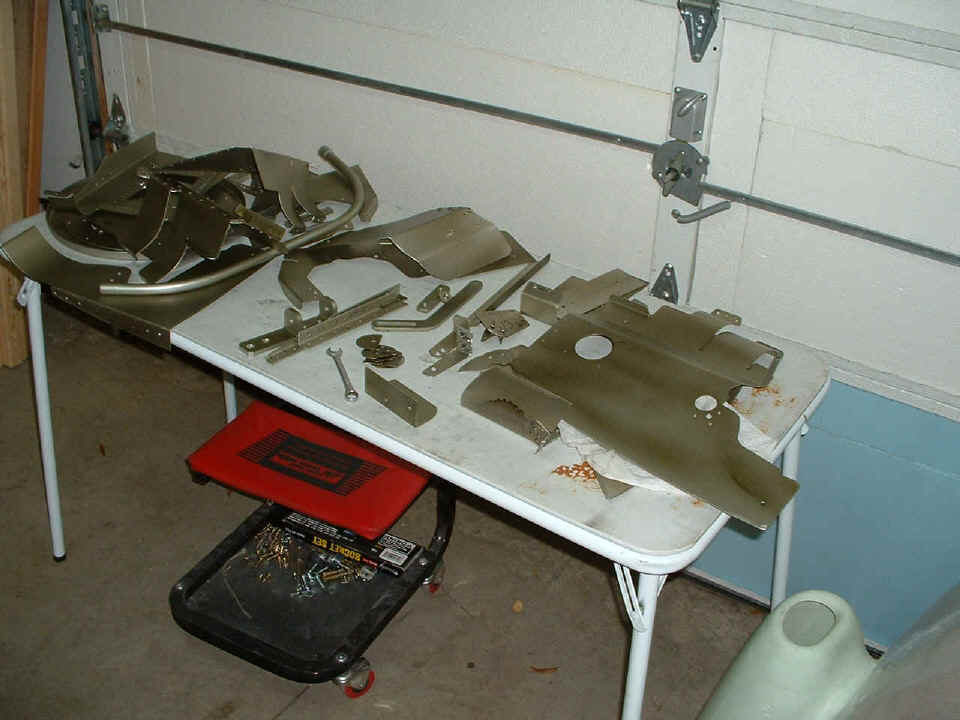 The evening was spent riveting this stuff together.  Most of it is baffle components for engine cooling except for this assembly.  This is the brace that secures the bottom of the fiberglass cowl between the firewall and the lower engine mount area right behind the nose gear leg.  We last saw this piece on PAGE 62.  The two flat head screws hold the bottom plate up against the rest of the assembly with the fiber glass cowl captured in between the plates and spacer. 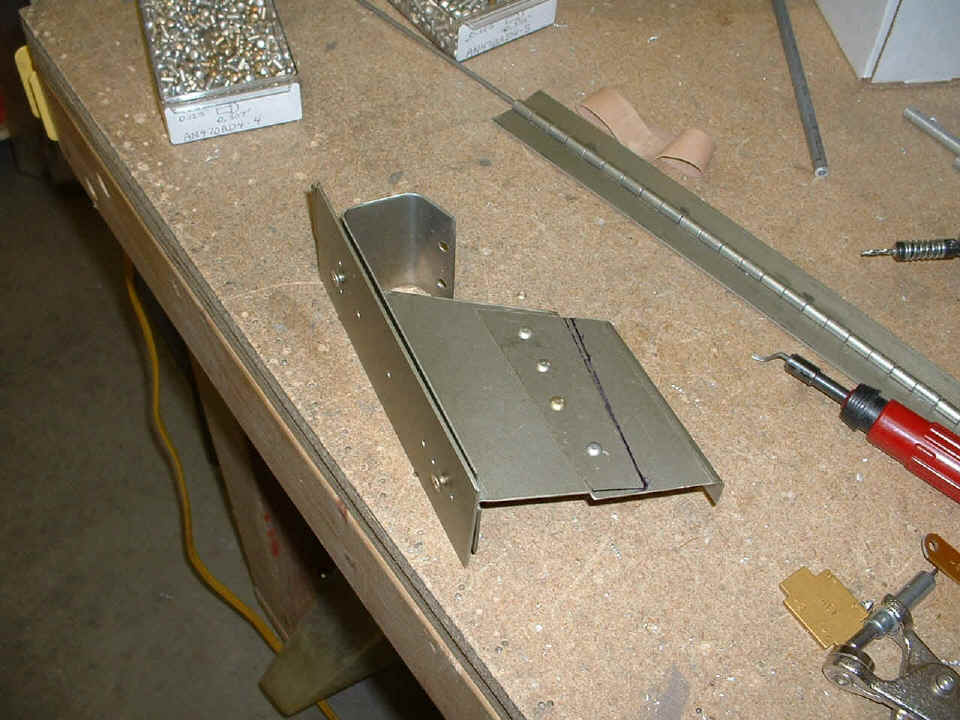 The aft left baffle and oil cooler mounting plate riveted together without any real grief.  I used my rivet squeezer as much a possible, then got out my rivet gun to hit the rivets the squeezer could not reach.  I even put a rivet to nowhere in one of the extra holes left over from an earlier erroneous mounting of the oil cooler.   The other holes will get used or covered when the flexible air seal material is added later. 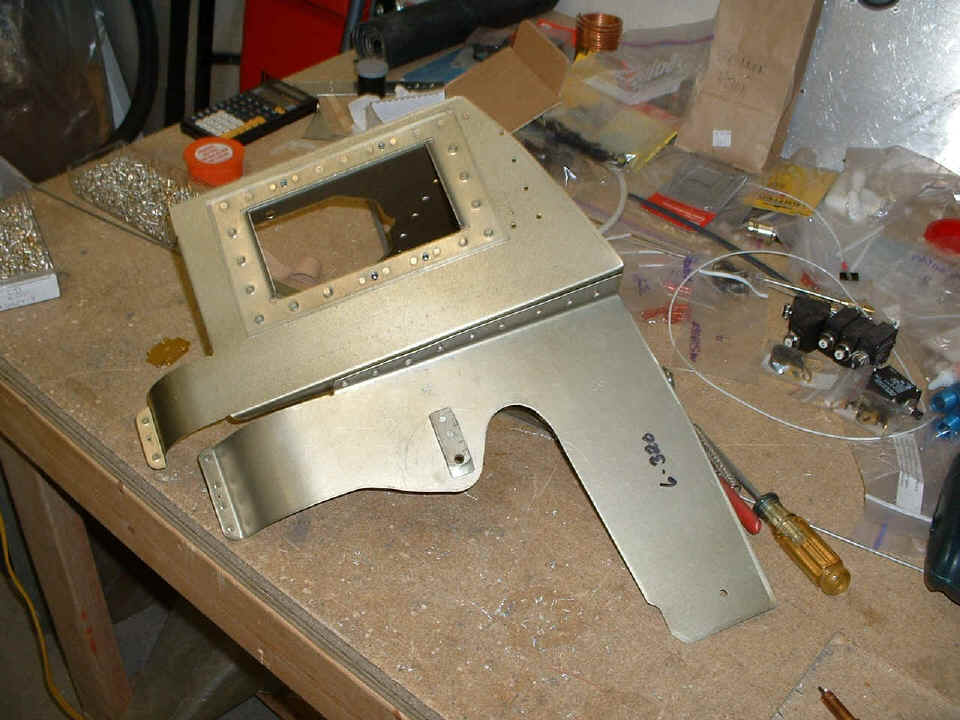 Next stop for that assembly was another check to see that it would still go on the engine easily before trying to secure it and add the RED high-temperature RTV to seal the cracks.  This photo shows the absence of the sensor wires for CHT/EGT.  I marked the ones that I had already connected and pulled them back through the firewall.   I did this since I had discovered that I would have to re-route some of them now that I have the baffles in place and see where things should go. 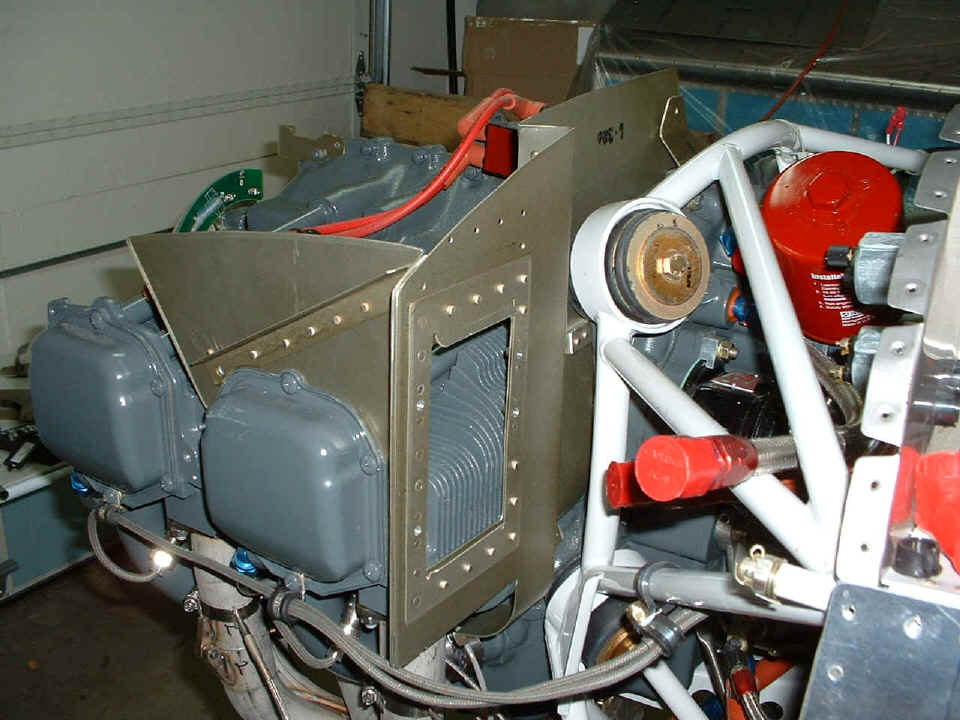 Things are moving right along when you get to the propeller back plate to mount the fiberglass spinner cone.  All 22 rivets are now in place to secure the doubler to the main back plate/flange.  And yes, every rivet was easy to squeeze. 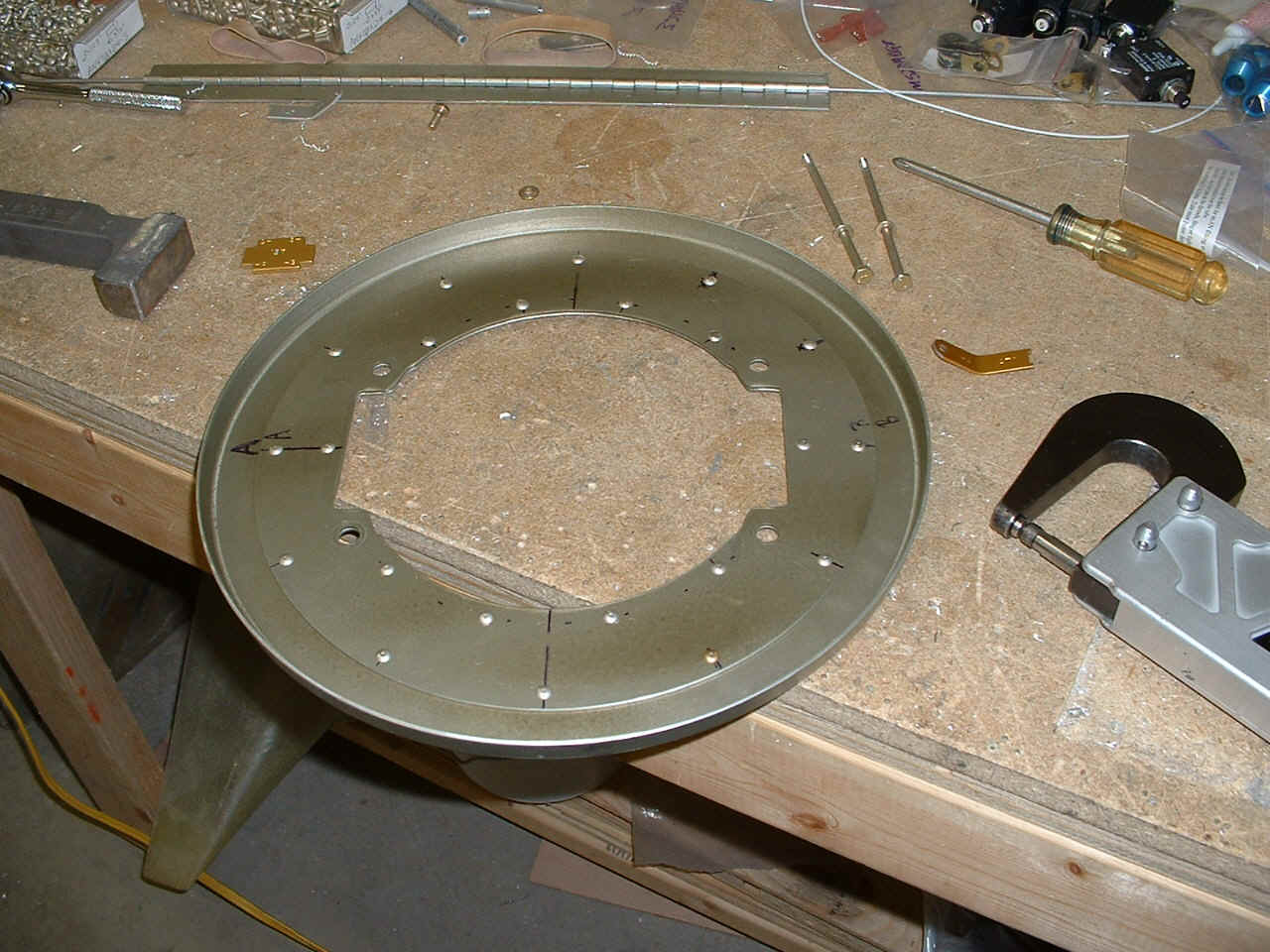 The last photo for tonight is the milestone photo showing the baffles going on for the "last time" if I have done my chores correctly.   I have to drill some access holes to bring the ignition trigger cables through to reach the solid-state high-voltage modules on top of the engine.  That will happen in the next few days as the emphasis will start to go back toward the wiring and other things away from the engine. 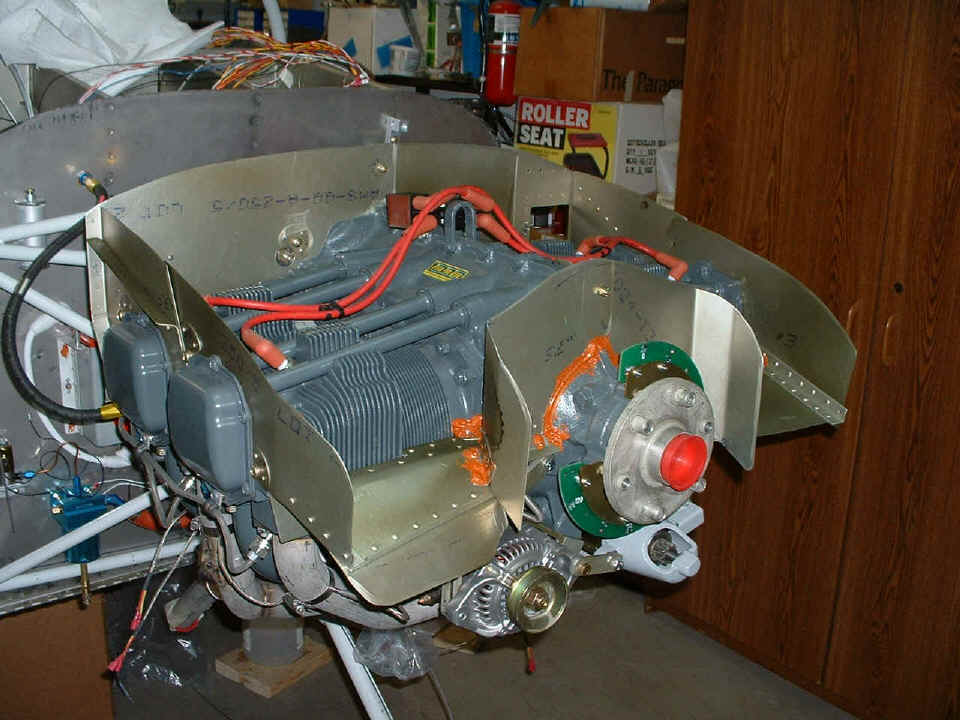 Speaking of other things, I received a package of precision molded fiberglass gear leg intersection fairings from Fairings-Etc.   The good work done by Bob Snedaker is much better than my meager fiberglass skills.   It will save me some time when I am ready to put the wheel pants on and get things streamlined for top speed.  That's ALL Folks!  (for tonight anyway)

November 19, 2004:  There is a milestone, the oil filler tube and dipstick are now mounted and secured with safety wire.  You can also see that I have started to seal the screen wire gap in the air duct mounting tube on the aft wall behind cylinder number 3. 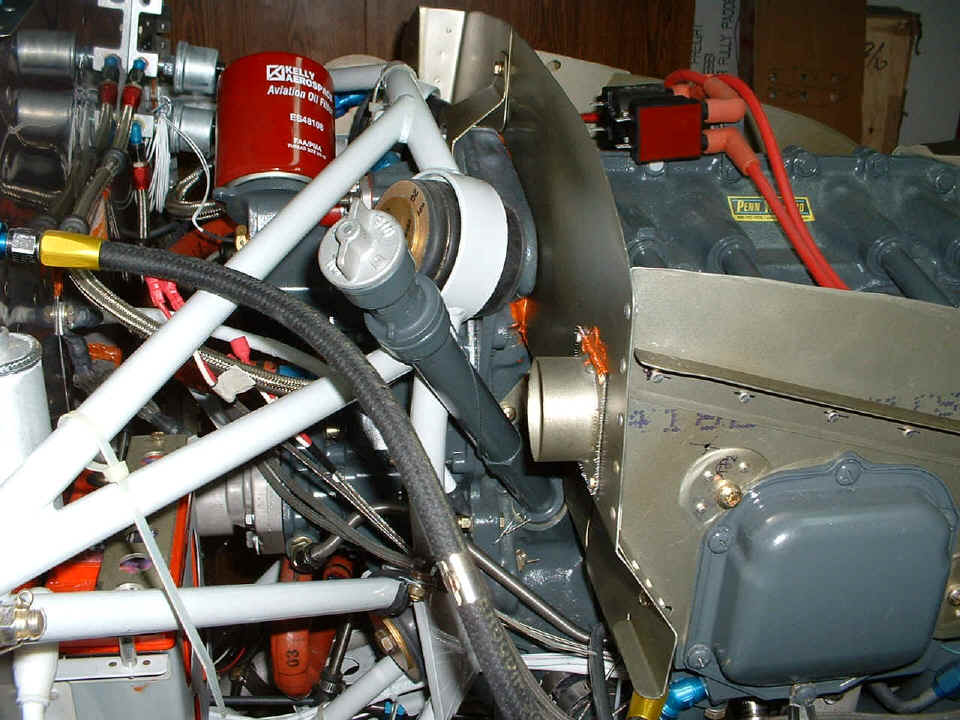 Here is the oil cooler on the other side of the engine mounted to the baffle behind cylinder number 4.  The oil lines are secured to it and I have put the RED RTV in the corners to close some air leaks there. 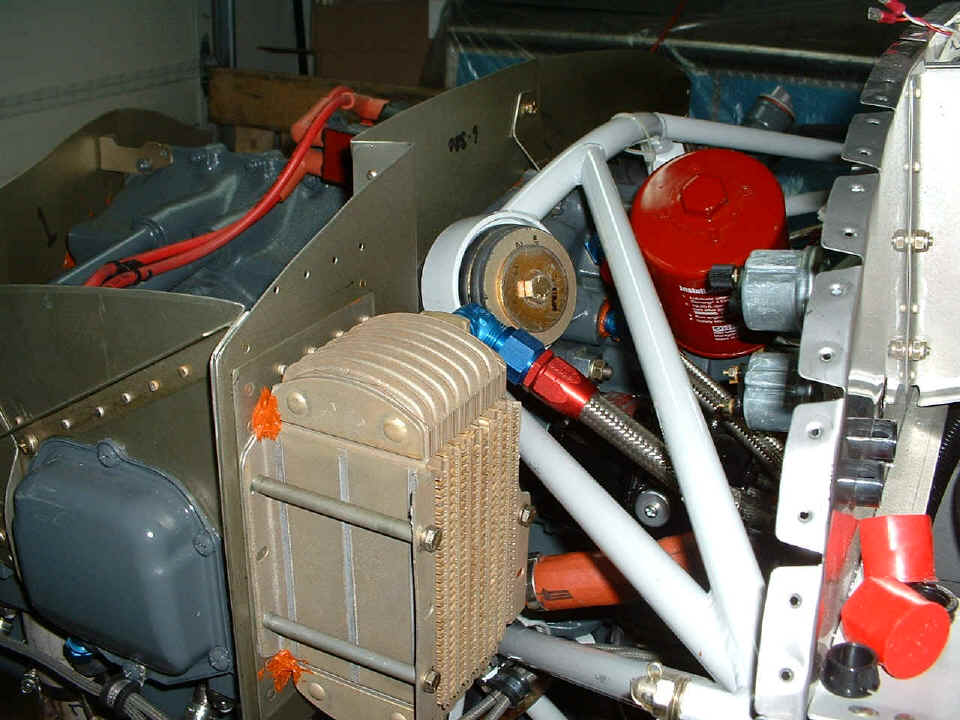 The last photo for today is the view looking across the engine from the LEFT side baffles showing the RED RTV that has been "slathered" on  the various cracks between the baffles fore and aft to seal around the crank case.  I am running out of the stuff and will have to pick up another tube when I go to buy the alternator drive belt tomorrow. 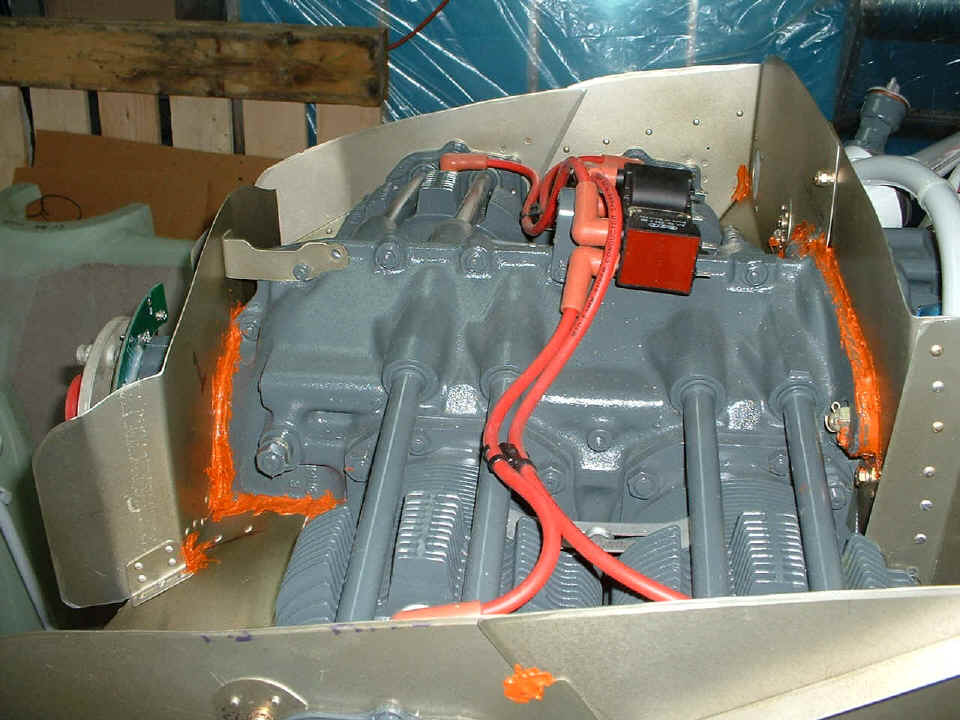 Nine pictures on this page is enough for you guys using dial-up internet access, so let's move on to page 67.