September 9, 2004:  This was the day the Hartzell constant speed propeller was delivered by Roadway Express.  It arrived about one week ahead of when I was expecting it.  YEA!!! 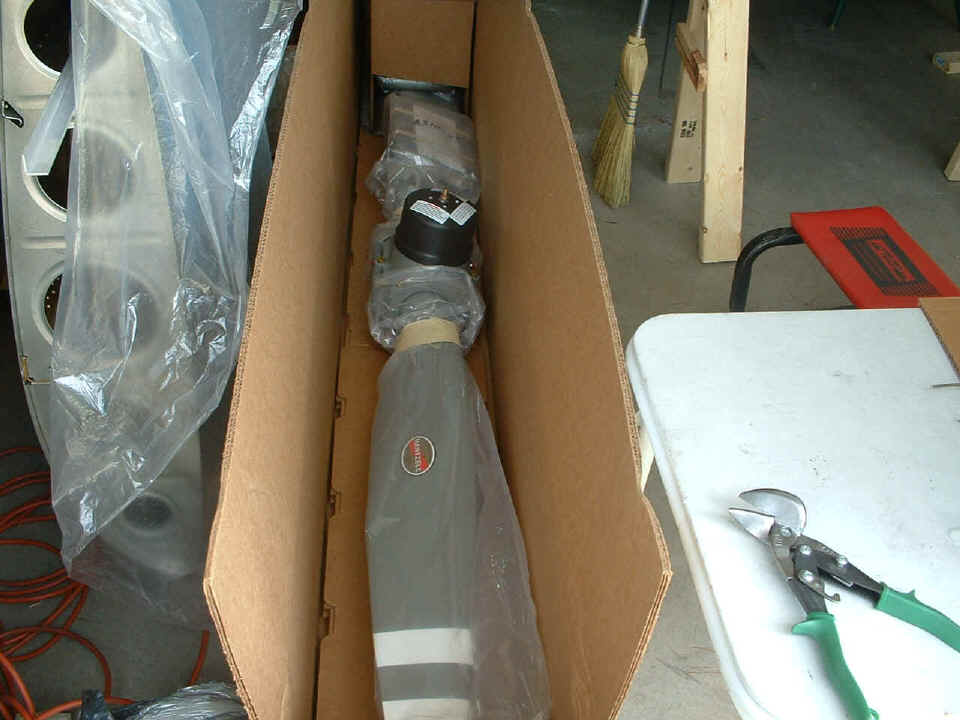 The other big deal today was to use the good weather for a parts priming session.  You've seen those pictures before, paper on the driveway, air hose, HVLP spray gun, green stuff, etc.  Let's cut to the chase.  I took all those primed parts and put them where they needed to be.  Take a look as all the hinges are in place on the lower firewall, the engine mount is bolted to the firewall, and the nose wheel is now in place. 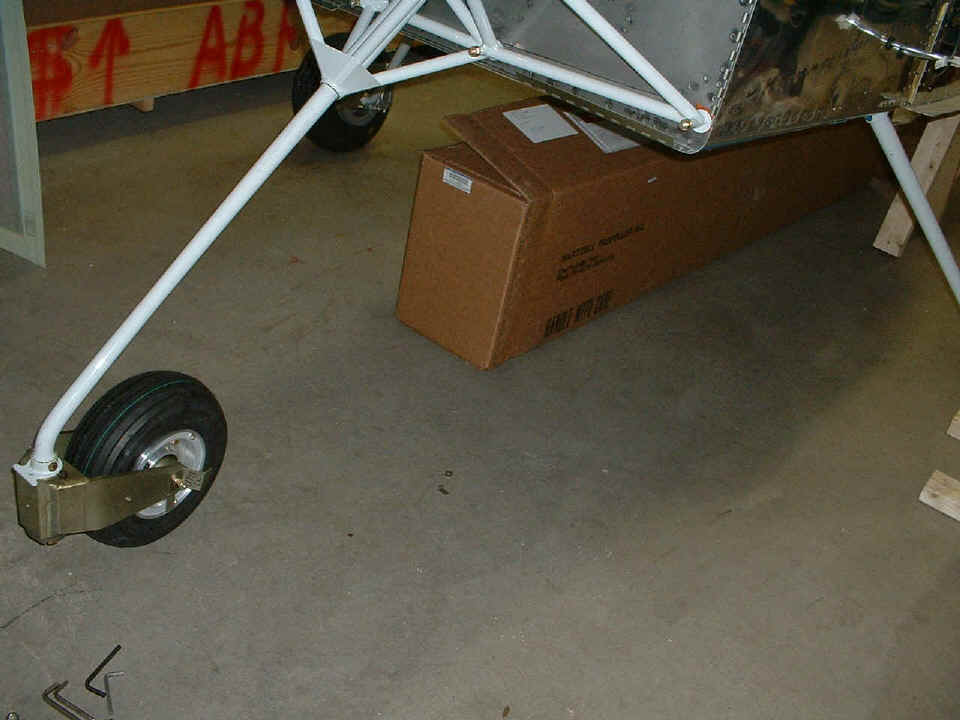 The milestones for today:  the prop arrived, and all THREE wheels are on the floor without any support from any saw horses!!!  And tomorrow is ENGINE DAY!!!!

September 10, 2004:  It is indeed ENGINE DAY!   I spent some time this morning doing some minor details before the engine was ready for pickup at the local FedEx Freight terminal.  I added platenuts to the brackets that hold the wheel pants to the nose wheel assembly.  Rich Nadig came by with his truck and trailer to transport the engine to my place.  He also loaned me his engine hoist for a couple of days.  And there is the famous RED cup again.  Rich is really putting some facial effort into the placement of the skid. 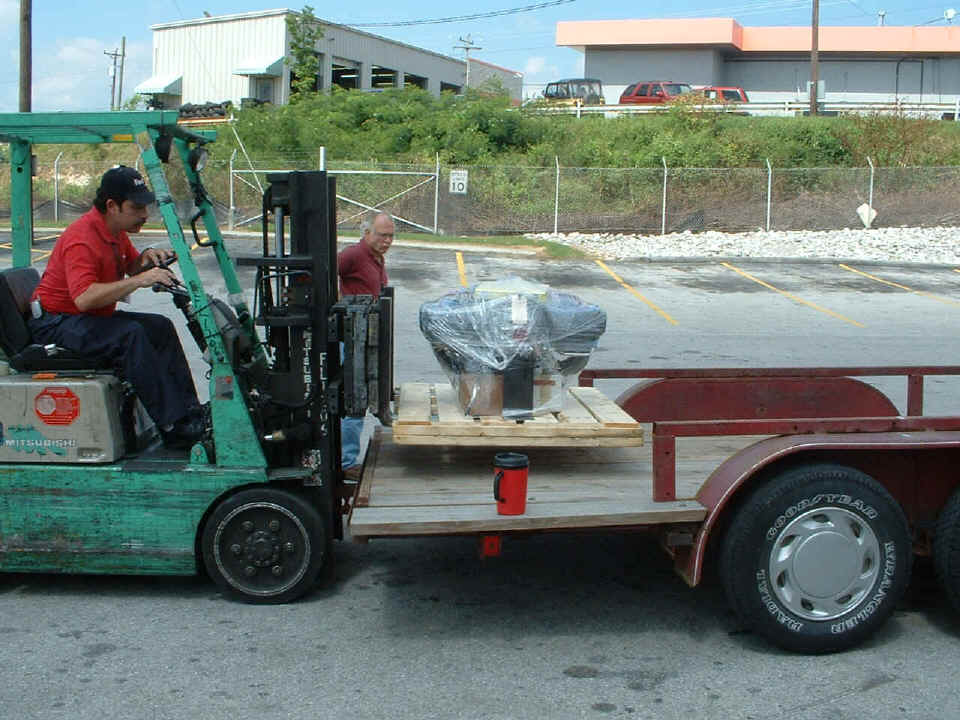 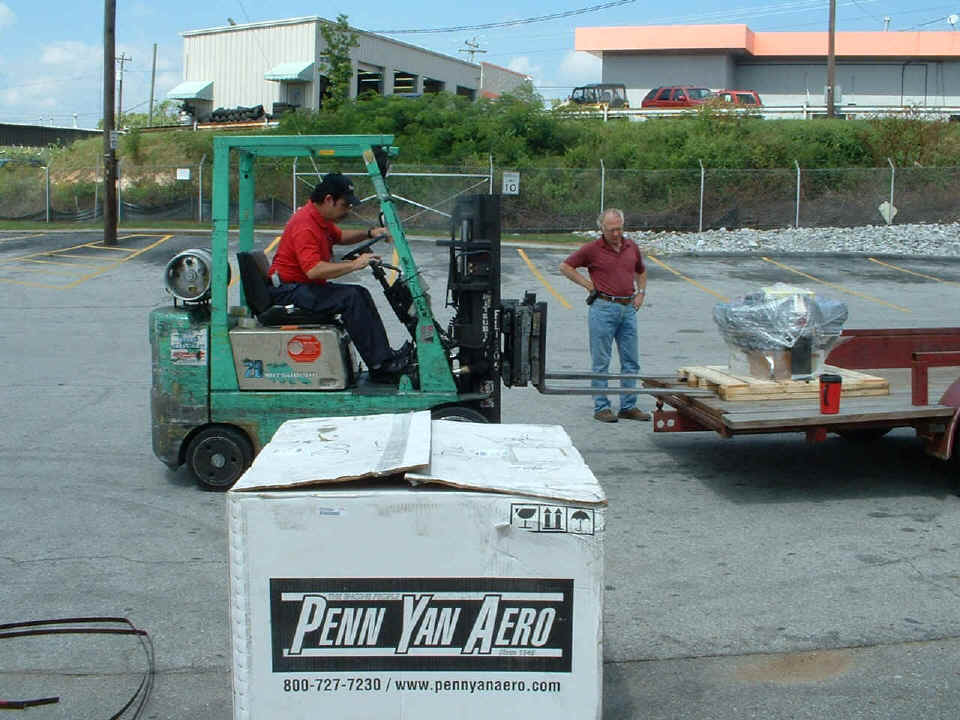 That's right, push it along with the forks just a bit further toward the fenders.   We lashed it down right after this photo was taken.  And of course, the covering box had to be photographed for Derick and the guys at Penn Yan Aero!

This shot shows some of the things done today before hanging the engine on the mount tomorrow.  I put on the oil ports to and from the oil cooler, the oil pressure fitting (with a red cap over it for now), the manifold pressure tap on cylinder number three, and the cover over the vacuum pump mounting location.   That gold fitting just below the oil filter at the left edge of the picture is the oil temperature probe. 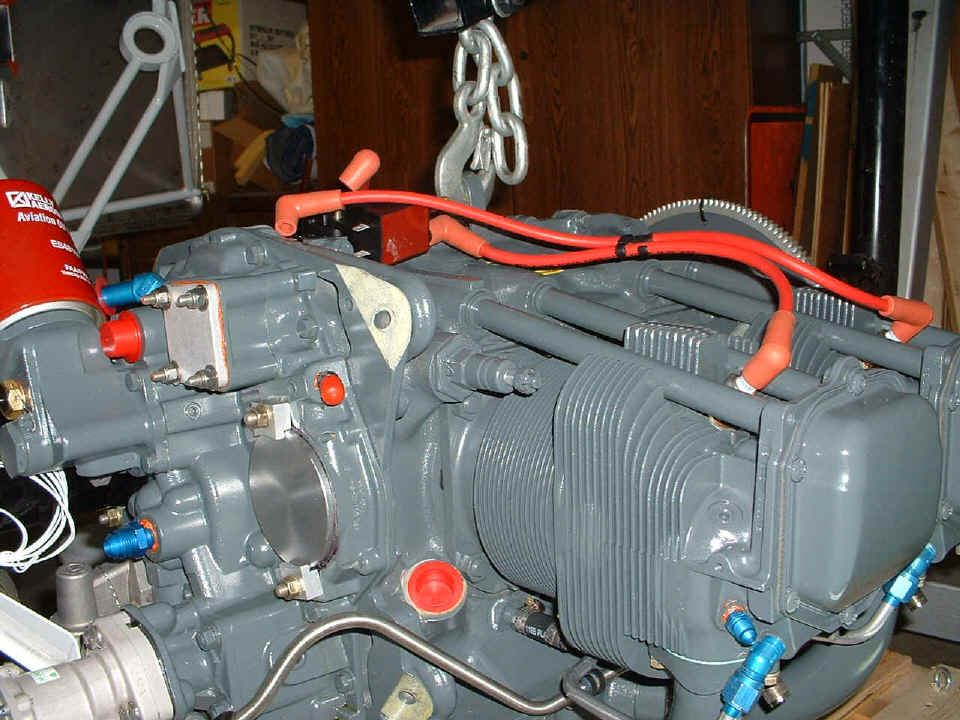 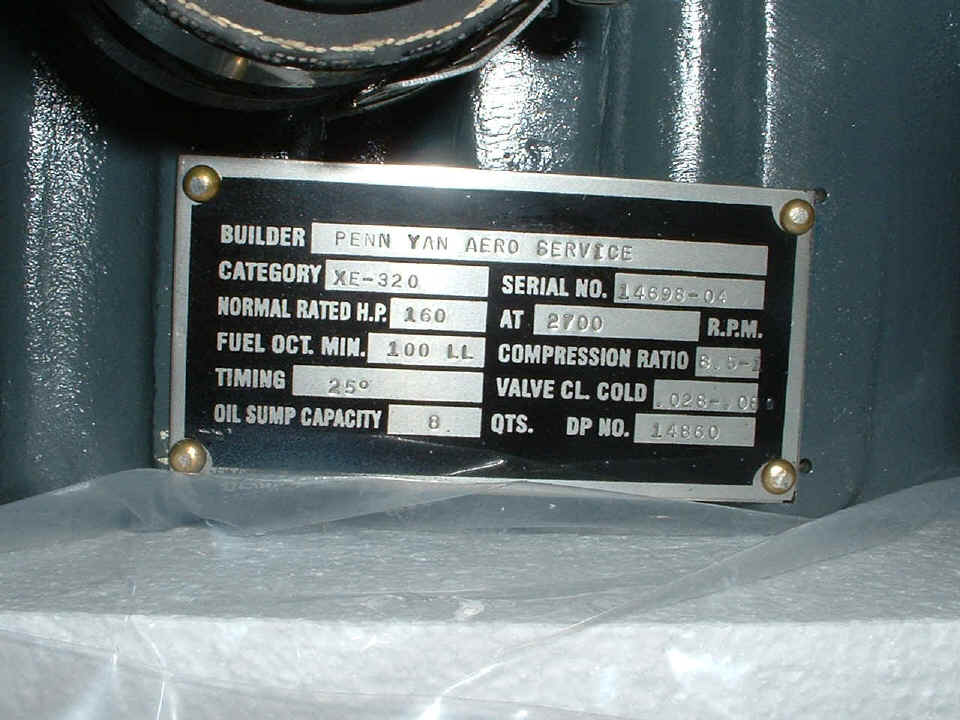 I also put the prop governor on the accessory case.  It shows up better in this photo.  As you can see, there is one black magneto and one electronic ignition which fires the automotive style spark plugs on the top side of the cylinders. 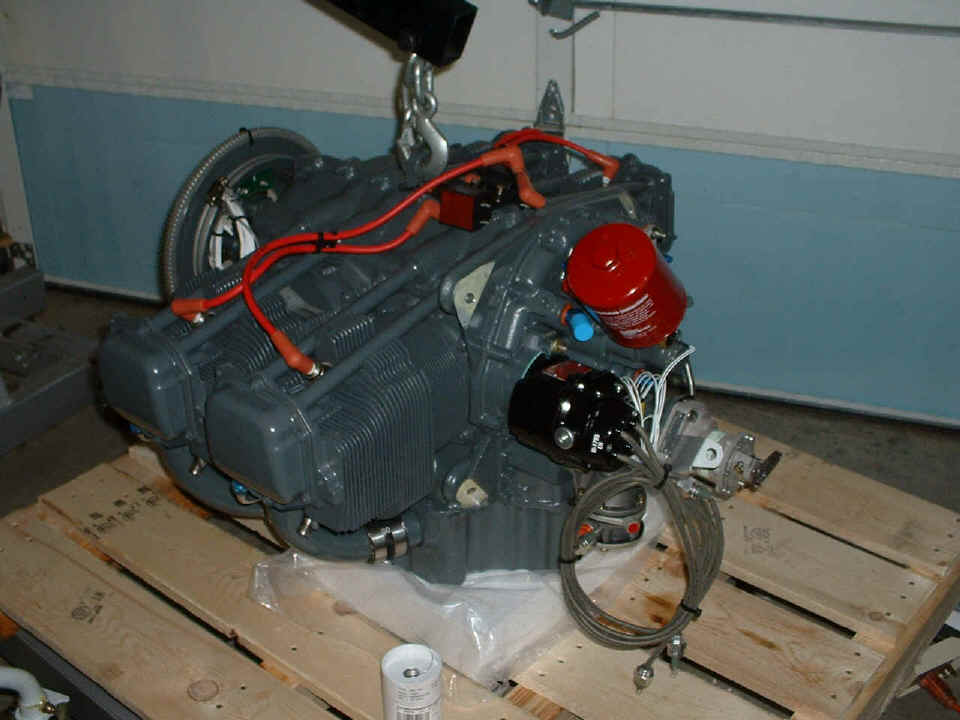 The oil pressure sensor is now installed along with the pressure line from the engine mounted along the firewall.  I have to mount some fuel lines to the gas colator before I hang the engine tomorrow. 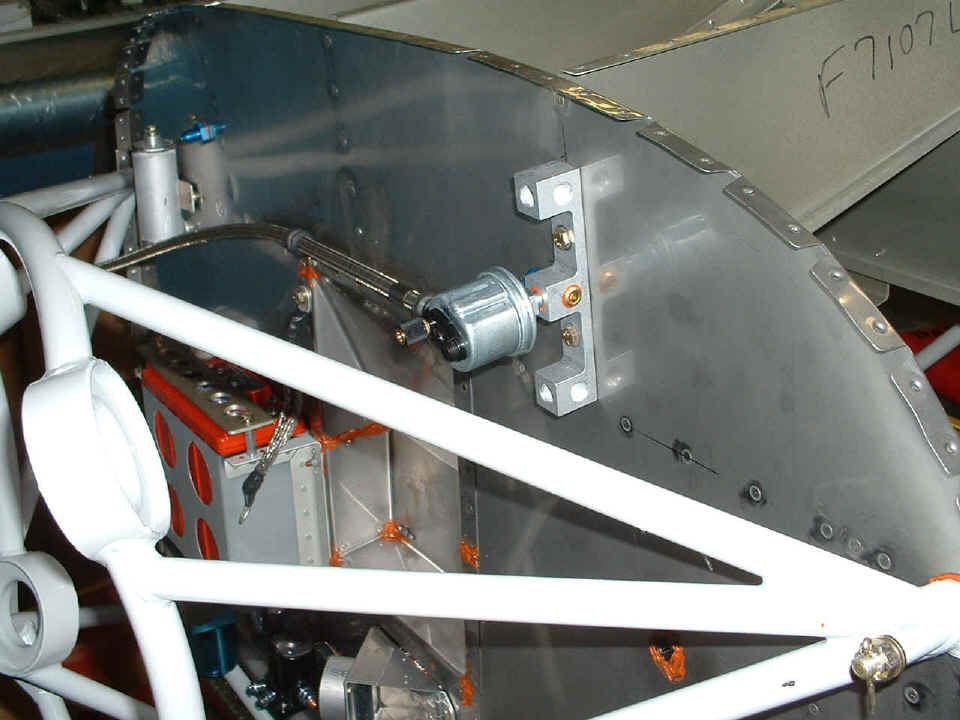 And I had one other delivery this morning via UPS, this engine monitor from Grand Rapids Technology.  It comes with exhaust gas temperature (EGT) probes, cylinder head temperature probes, oil pressure, RPM, fuel flow, voltage, etc.  You can read all about it at the link above.  The U.S. quarter will give you an idea of the small size of this thing.  Watch for it to go into the instrument panel in a future session. 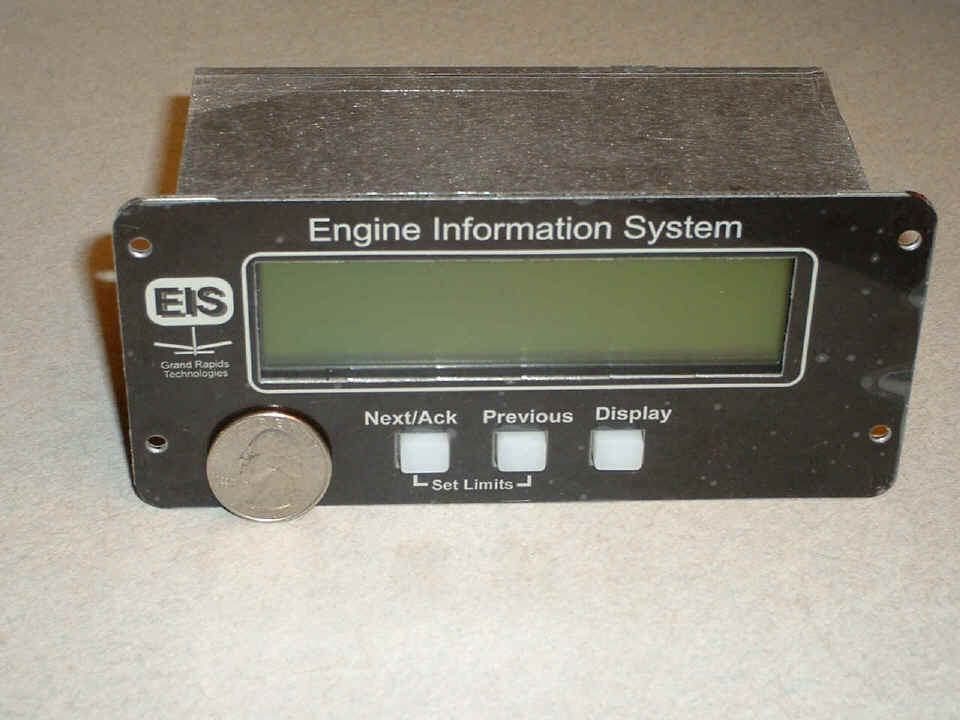