July 27, 2010:  We were near the Wisconsin - Illinois state line when Edward took this photo of a wind-powered electric generator array under construction.  There are no blades attached to the towers at this time of the construction. 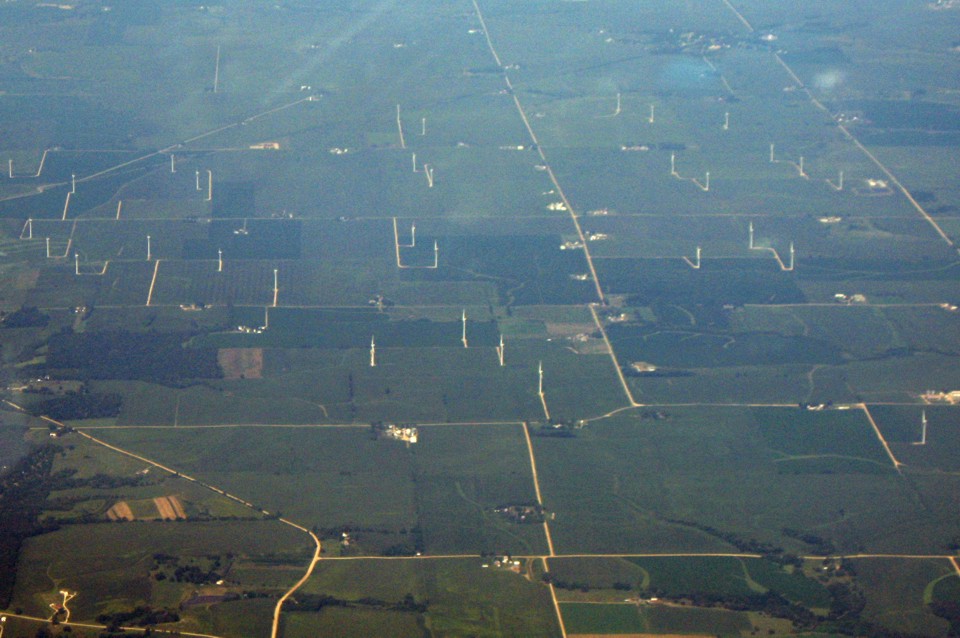 We were cruising at 10,500 MSL at the top of the haze with clear air above as we cut across part of Illinois heading for the Quad Cities on our way to the fuel stop at Moberly, Missouri. 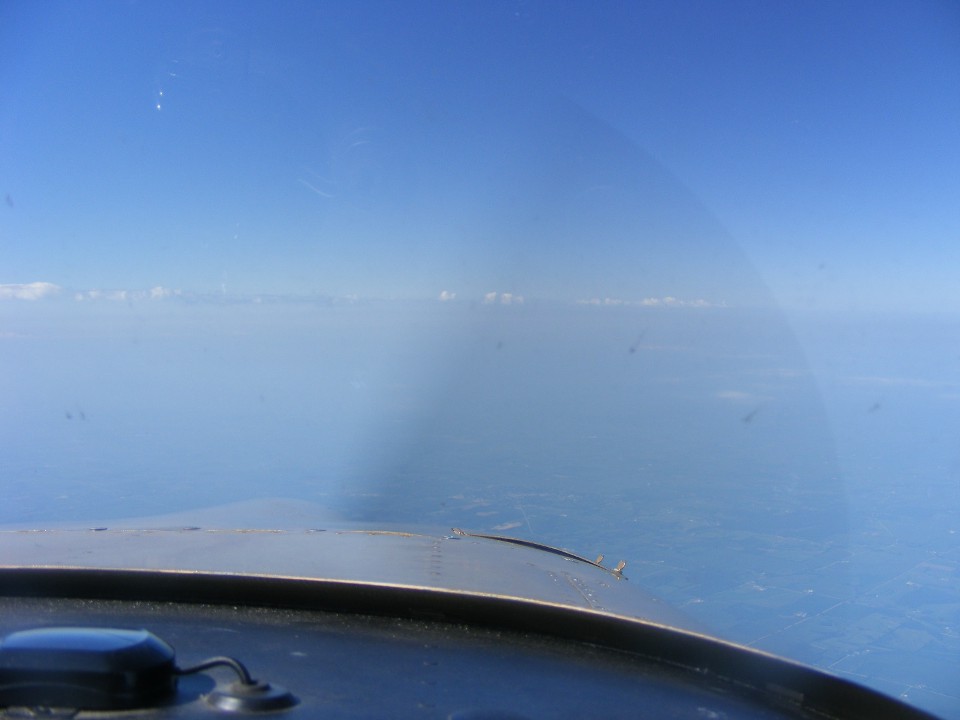 Here is the GPS ground track for the flight from Oshkosh to Moberly, Missouri.   We crossed the Mississippi River three times today.

Here is the first crossing of the Mississippi River just north of Fulton, Illinois and Clinton, Iowa.  Lock and Dam number 13 is located on the left bank of the river here. 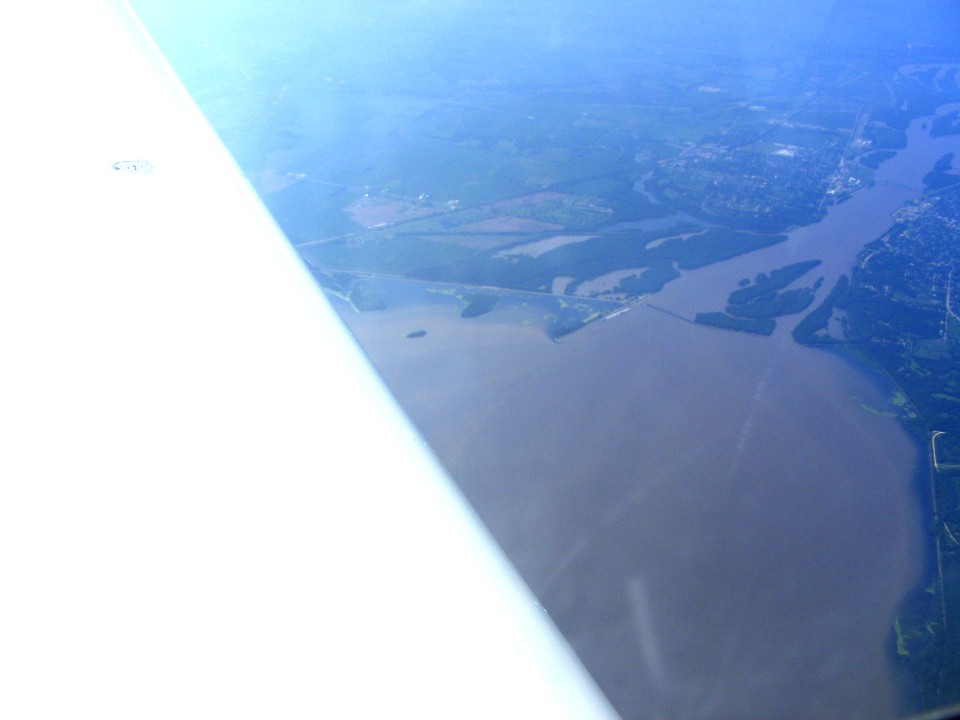 This is the curve in the river to the west seen south of Clinton, Iowa.   The largest "island" in the river is Beaver Island in Iowa.  The bridge connecting the two towns carries US 30, aka "The Lincoln Highway" across across the Mississippi River.  The Lincoln Highway originally ran from New York City down near Philadelphia where US 30 takes up the original route across Pennsylvania and westward.  Much of the Lincoln Highway is now followed by US 30.  The Lincoln Highway separates from US 30 in Wyoming where Interstate 80 follows near some of the old highway through Utah, Nevada, and eventually to San Francisco.  The western end of US 30 is located at Astoria, Oregon at the US 101 bridge crossing from Oregon into the state of Washington. 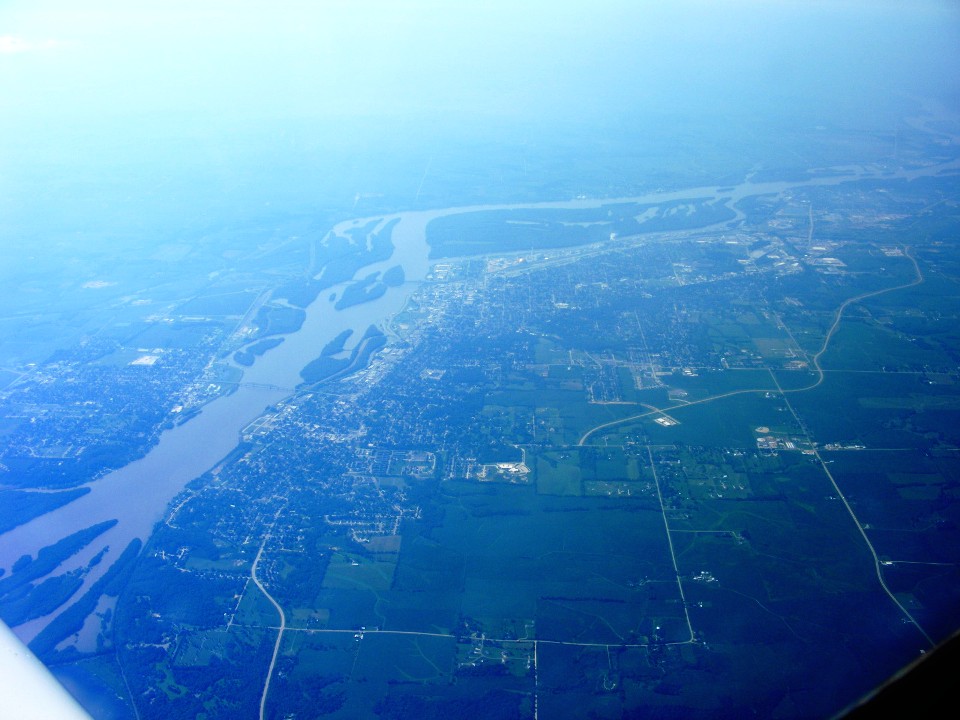 Edward snapped this view of the Davenport, Iowa Airport just before we crossed the Mississippi River for the second time.  We were much lower than 10,500 MSL when we flew north across this area on Sunday morning heading for Dubuque, Iowa.  The right tip of the horizontal stabilizer is visible with the elevator perfectly in trail at this cruising speed, altitude, and weight of the airplane. 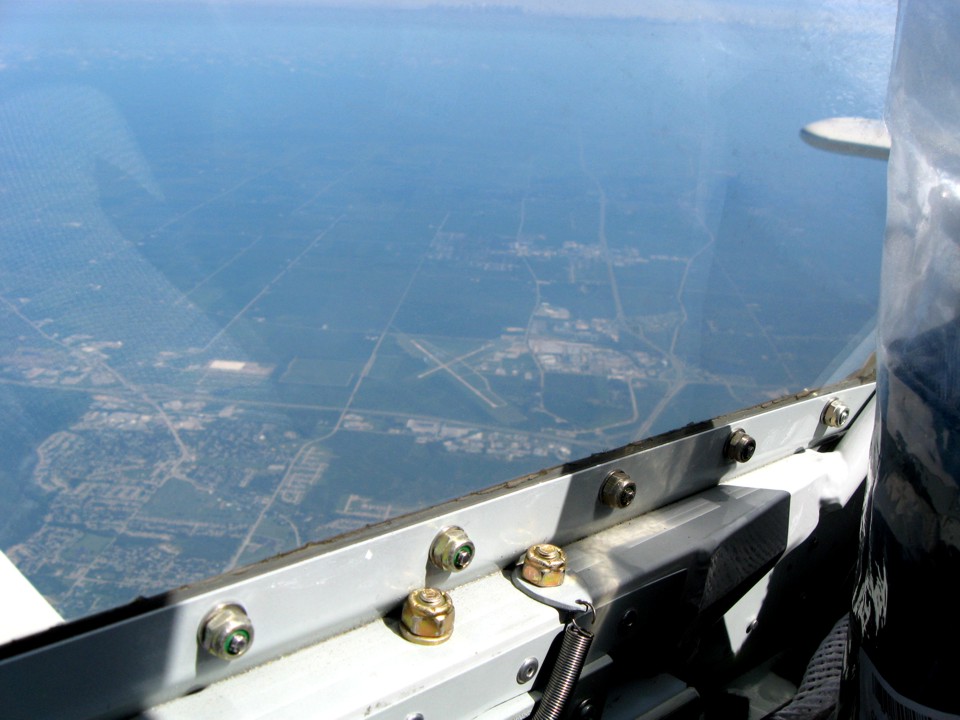 We crossed from Illinois back over Iowa just north of Keithsburg, Illinois.   Huron Island below and the bend in the river is just south Keithsburg.  The cloud formation here is subject to the effects of the water temperature of the river. 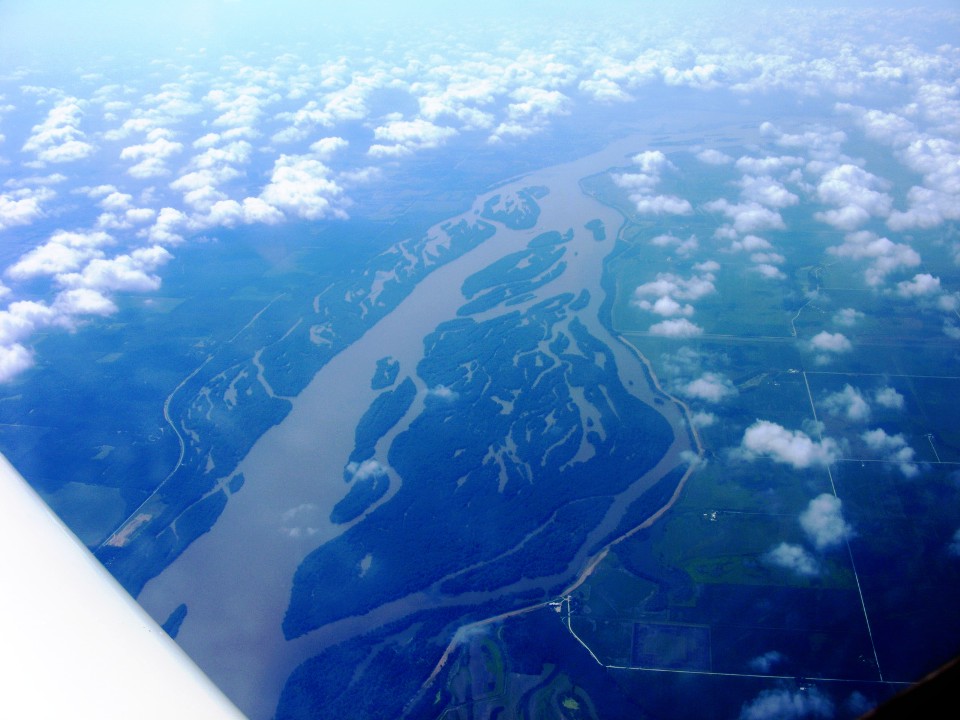 Here is the view ahead toward Burlington, Iowa.  We will not cross the river again today. 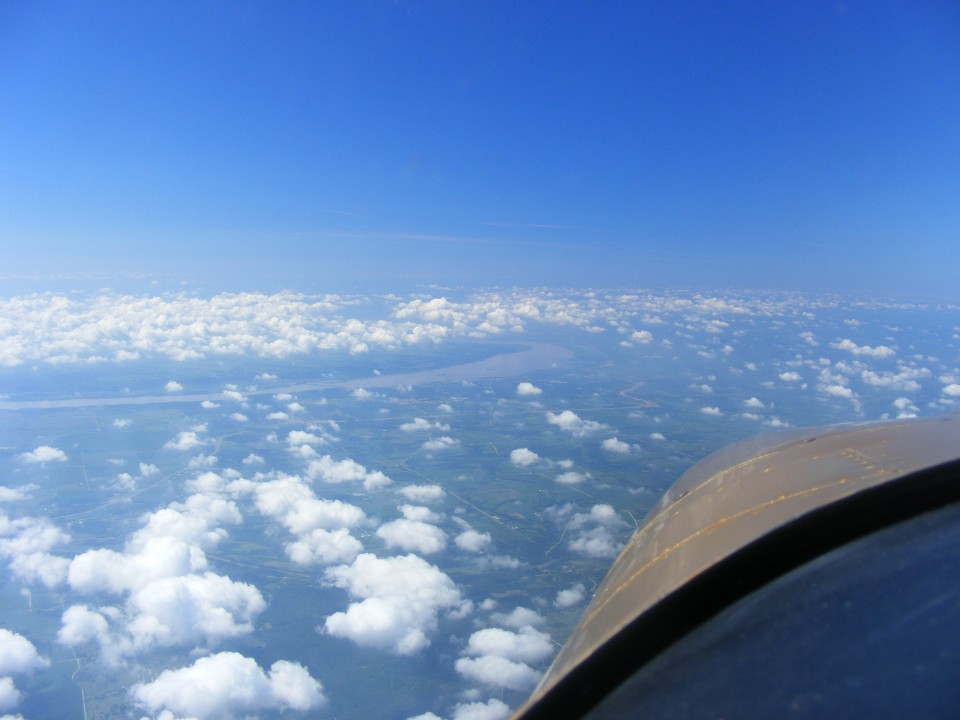 It was hot on the ground when we reached the Omar Bradley Airport at Moberly, Missouri.  The airplane got fuel and so did we.  The airport loaner car was a former police car and in "like new" condition, without all the lights, siren, markings, etc.  We wanted something normal so we went into town and stopped at Burger King.  We left our cameras in the airplane and failed to take the usual pictures at the airport upon our return from town.

The next leg of the trip today was planned for Henderson, Texas and the cheap AVGAS there, but mother nature had other ideas.  The GPS ground track tells part of the story.  The Rusk County Airport is located south of Longview, Texas.  You can see how weather started our diversion to the west as we flew over Arkansas.

Here is what we started seeing as we climbed above the first cloud layer about 20 miles south of Moberly.  The clouds here are just the normal build up from daytime heating. 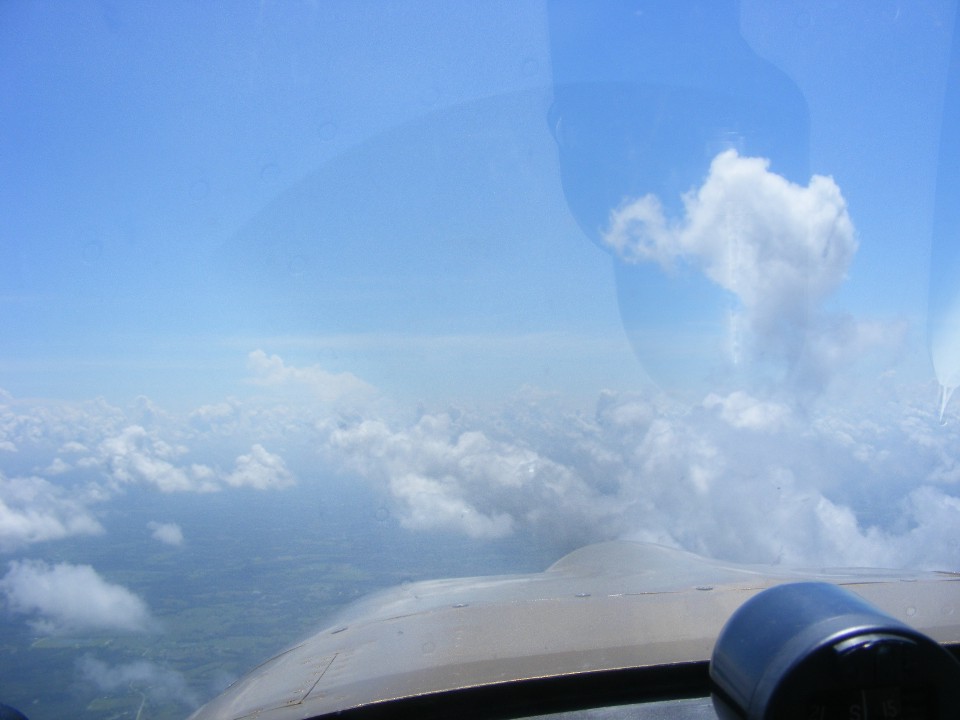 By 2 PM Central Time, clouds are starting to build up north of Eldon, Missouri.   The clouds are not as high on our course to the south as we climb toward our cruising altitude. 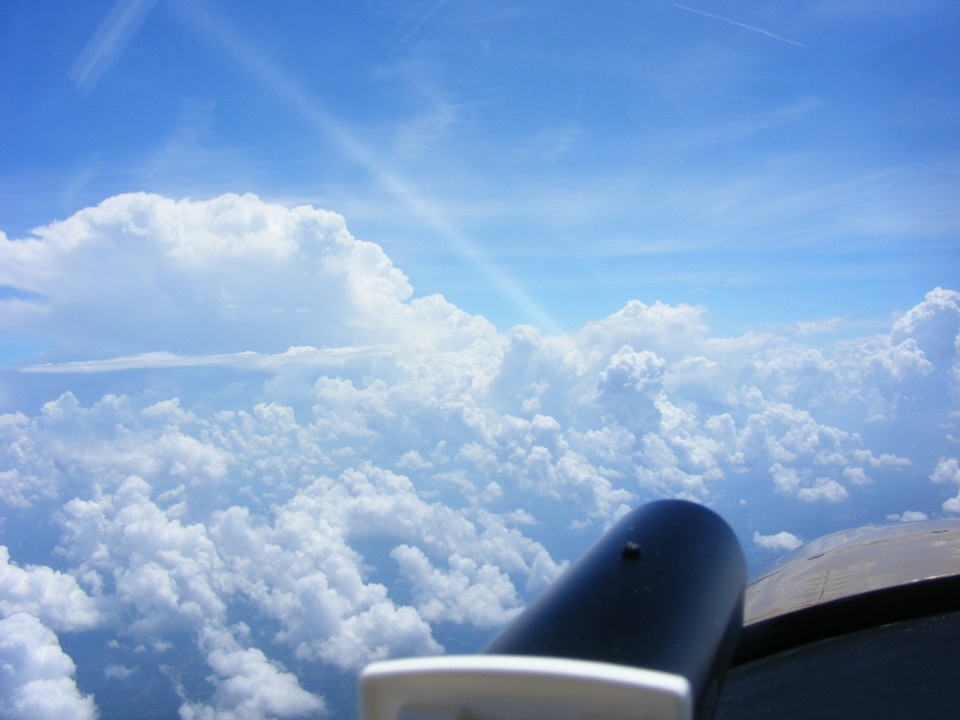 There is one thunderstorm off to the right of our course building up and being blown off at the top.  We won't be going near it on our heading. 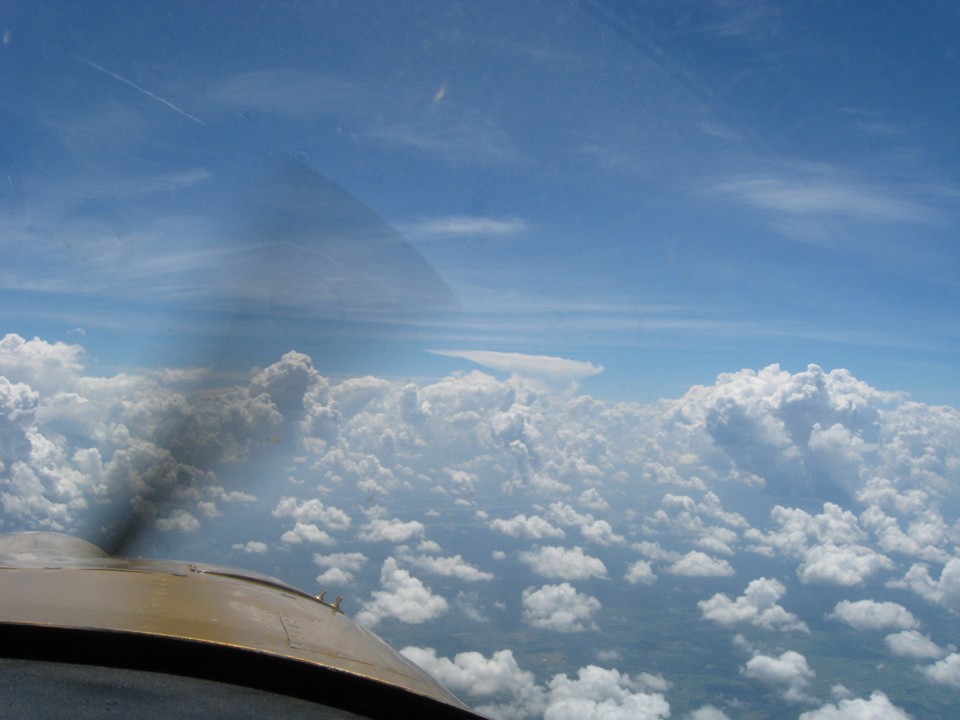