July 27, 2010:  We had only Sunday and Monday to be at AirVenture, so when Tuesday morning came, the breakfast trip down to the Warbird Cafe started our process at 6:30 AM when they opened.  Both RED CUPS were filled with ICE and water before we left the restaurant.  We then stopped by Homebuilders Headquarters to "check out" and reclaim part of our deposit for camping fees.   There is a three-day minimum camping fee.  Due to the wet conditions keeping us out on Saturday, we were only here TWO nights.  The AirVenture annual glass mugs were still not in stock for 2010.  I guess I will have to be content with the mugs from 2005 and 2006 in my trophy case.

We went back to the airplane and started clearing out the tent and preparing the airplane for reloading all the stuff.  I used the leather chamois cloth to clear all the dew from the airplane before I started "load testing" the wings before packing. 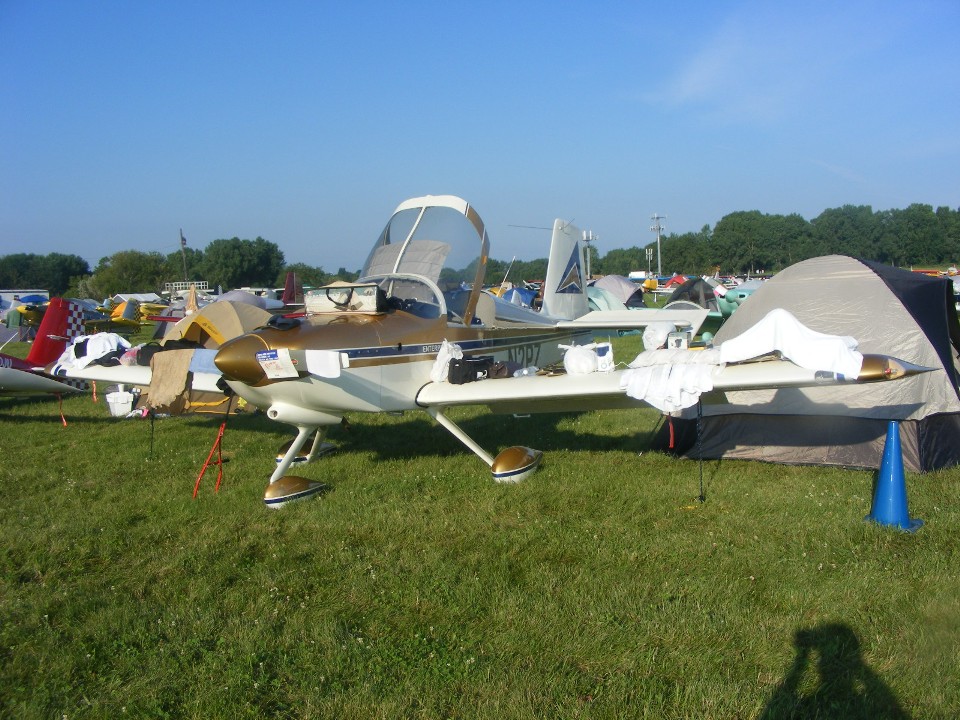 We dried off the dew from the tent before putting it back in its bag.   When everything that was on the wings was inside the airplane, it was time to pull the "Enterprise" out into the taxi lane between the rows of airplanes and tents, pointing it at a right angle to the other airplanes and tents.  It is not polite to crank up from where you were tied down, since you will probably blow away your neighbor's tent.  Our empty camping space is now ready for the next arrival to AirVenture. 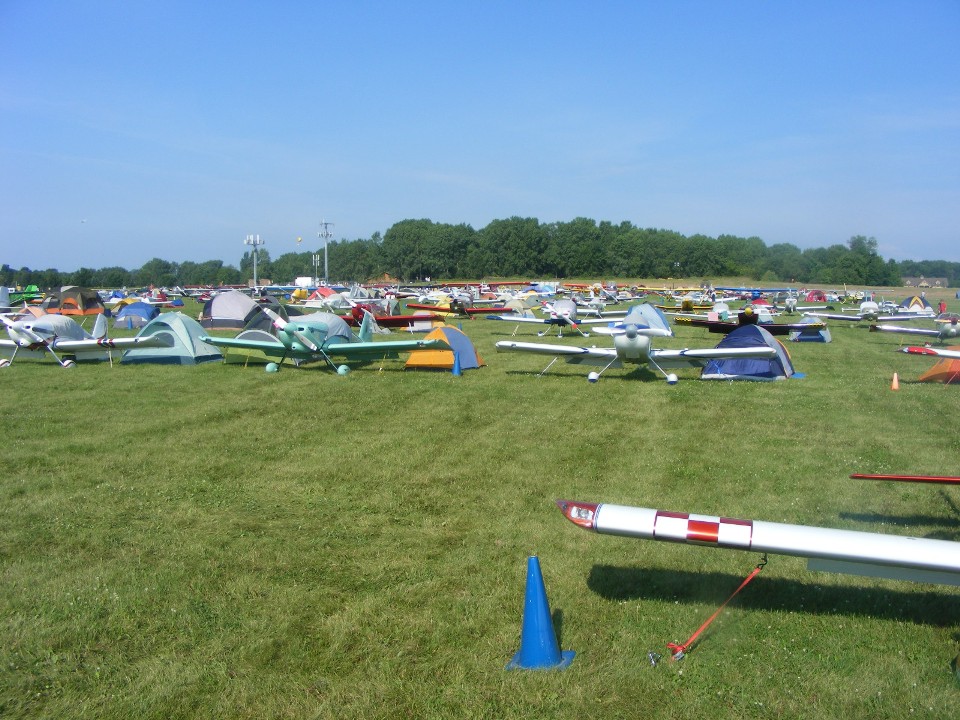 I stood up on the wing to take this next photo looking to the northwest.   There were a few more empty spaces than I noticed last night. 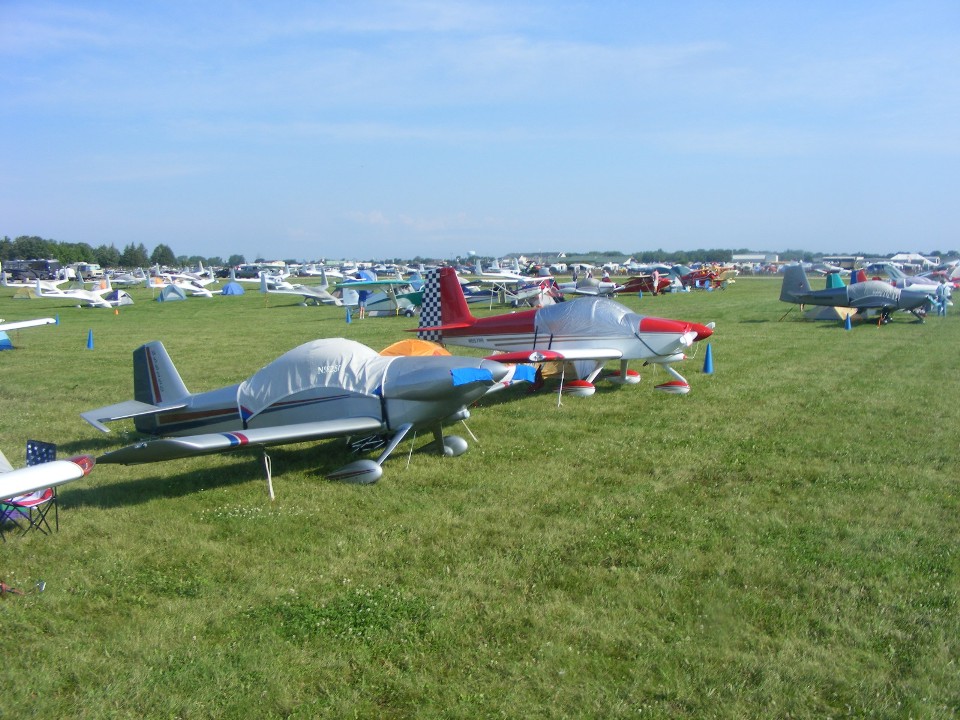 I took this last photo with my camera at 9:44 AM Eastern Time, 8:44 Central, again standing on the wing to get a good view of the camping and parking area to the East.   I put the camera beside my seat and got strapped in for departure. 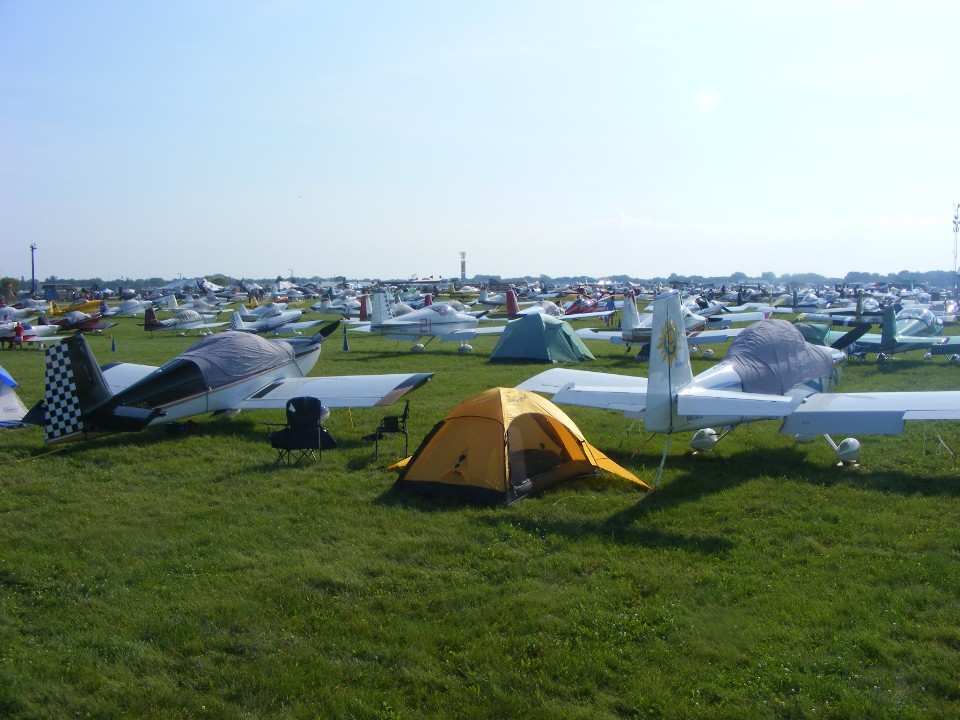 I received a few emails from Bill Boyd in 2011 with the next three photos as we were departing the campground.  The engine is idling as we await an escort vehicle to get us out to the taxiway and line up for departure. 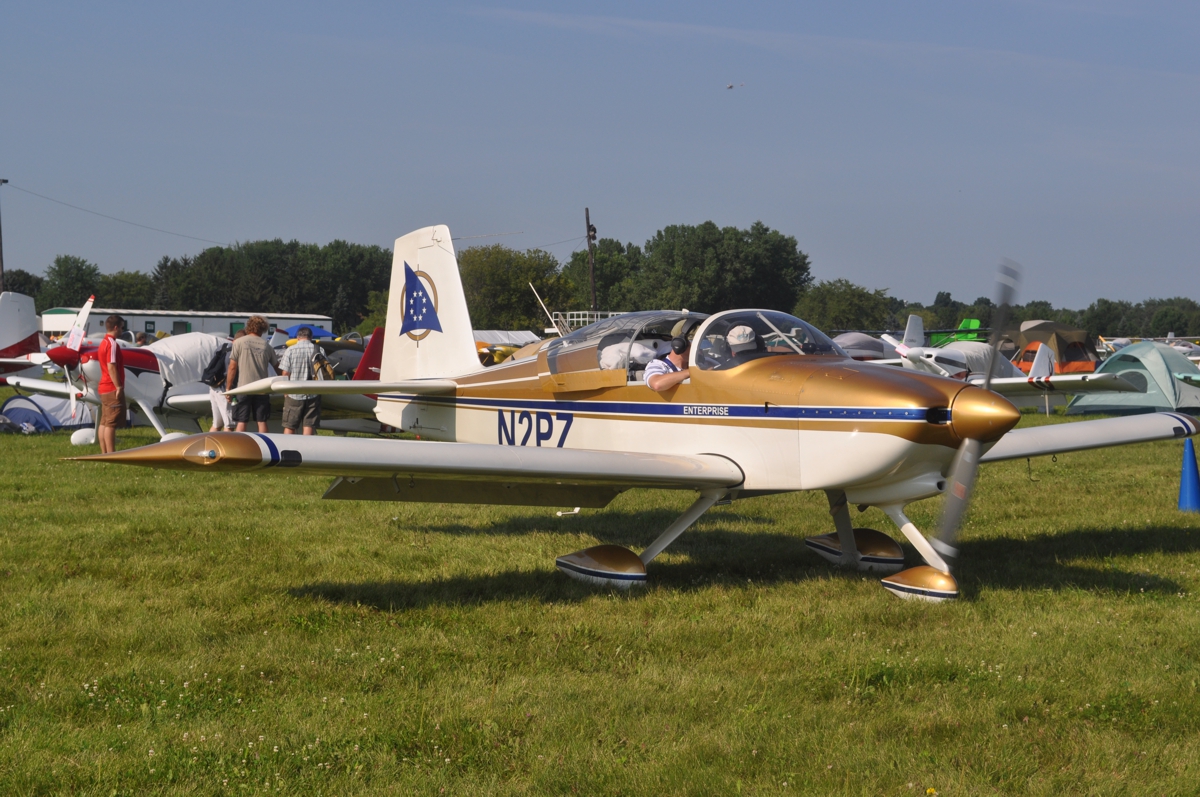 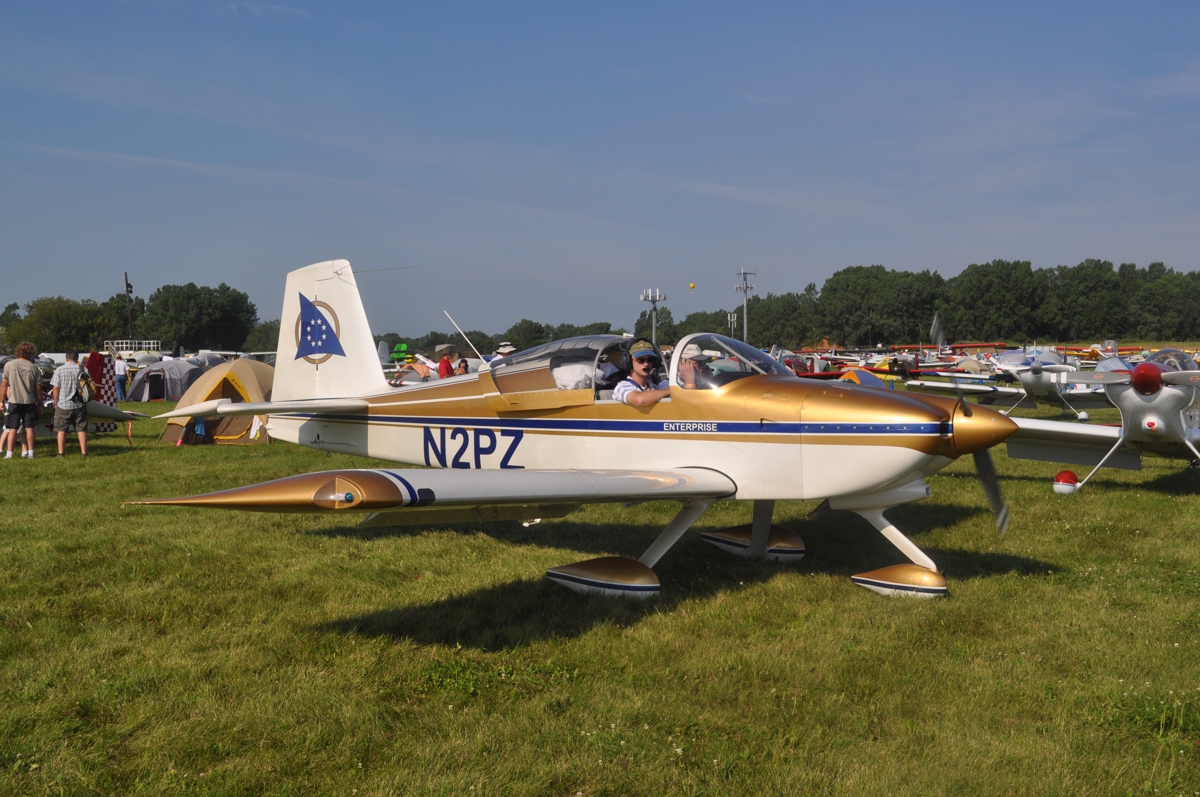 I had my video camera running right after engine start and activated the next route I had stored in GPS memory.  By the time I had finished, one of the plane handlers on a motor cycle came down our row and I showed him my VFR sign, then placed it in the left side of the windshield out of the way of the video camera.  I gave him the wind-up sign with my right hand and he understood I was ready to go.  He escorted us out to the north end of the camping area and on to the taxiway EAST toward runway 18 RIGHT. 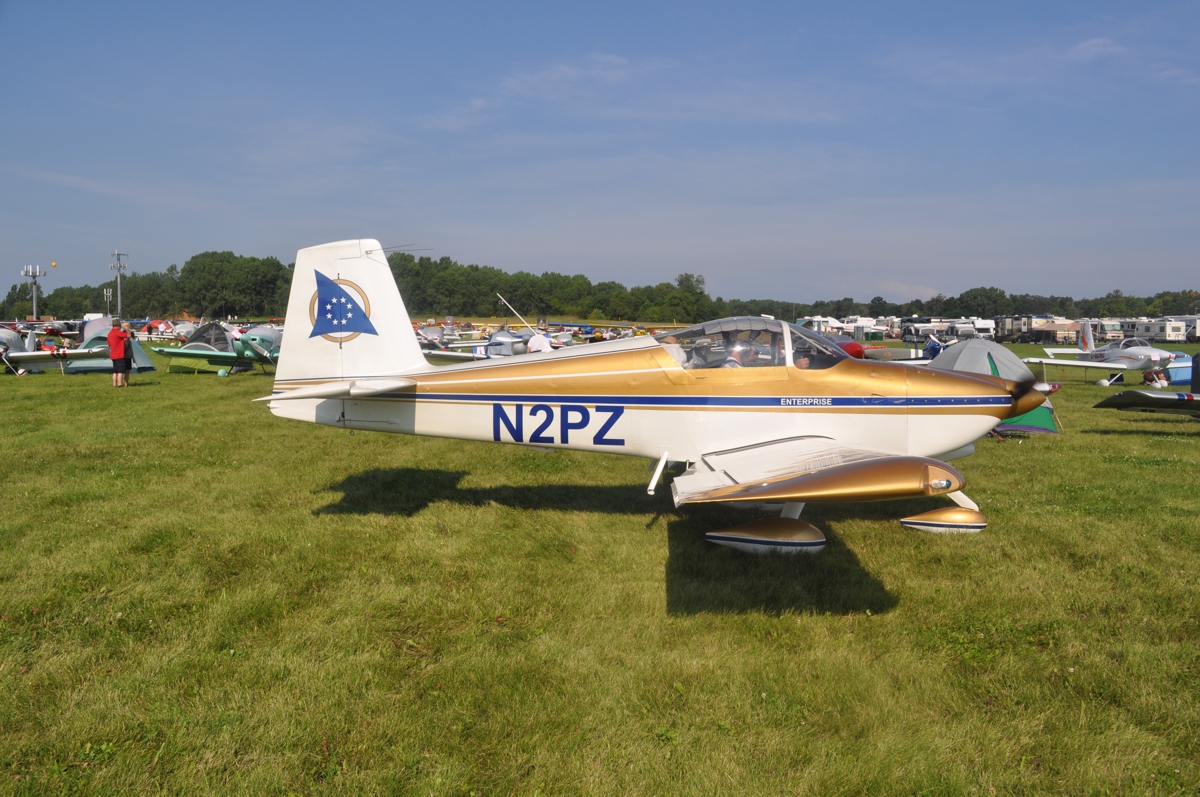 We were handed off to a flagman who saw my VFR sign and put us on this route you see below to runway 18 RIGHT for a southbound departure.  I asked Edward if there was anyone behind us since I was ready to do the engine run up test of the ignition systems.  We had the canopy open slightly, so he stuck his camera up above the canopy, pointed it backwards, and took this photo.   Notice that virtually all of the airplanes that were parked along the taxiway are now gone, as in moved to the "North 40" camping area adjacent to runway 9 and 27.   Edward took this photo at 9:04 Central Time. 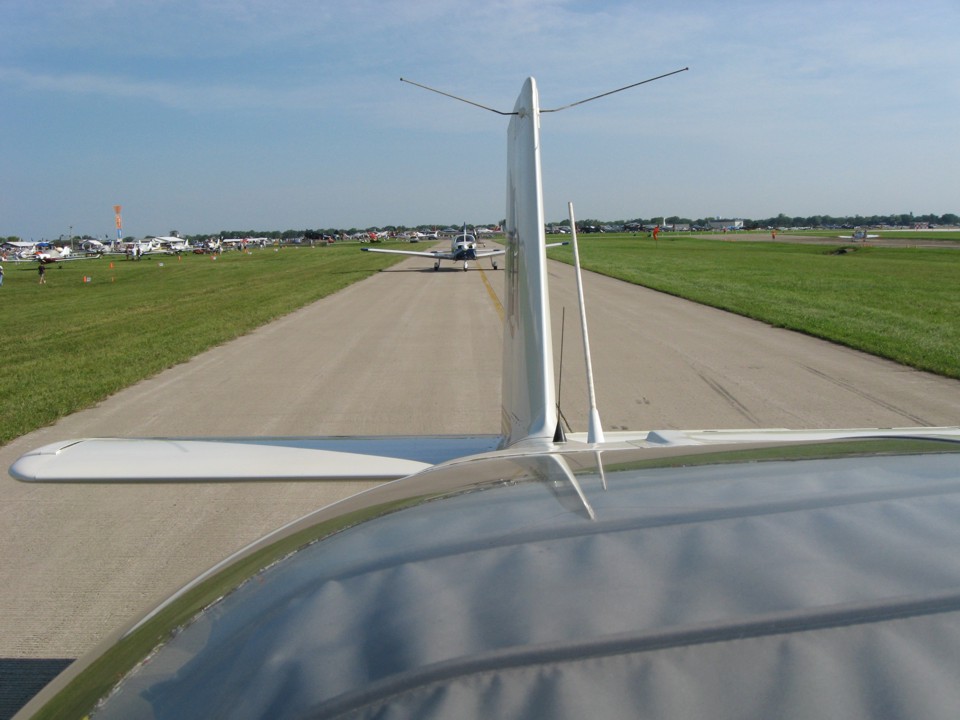 He wanted to get a view of the "show plane" parking area and the control tower from our location on the taxiway. 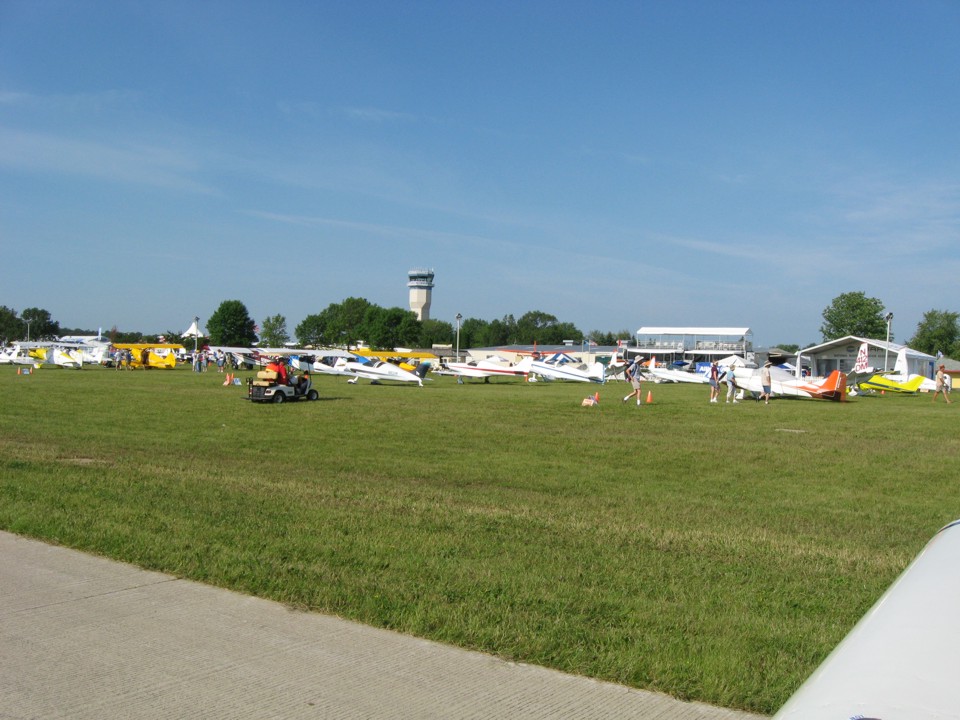 I cropped this photo from the wider view above. 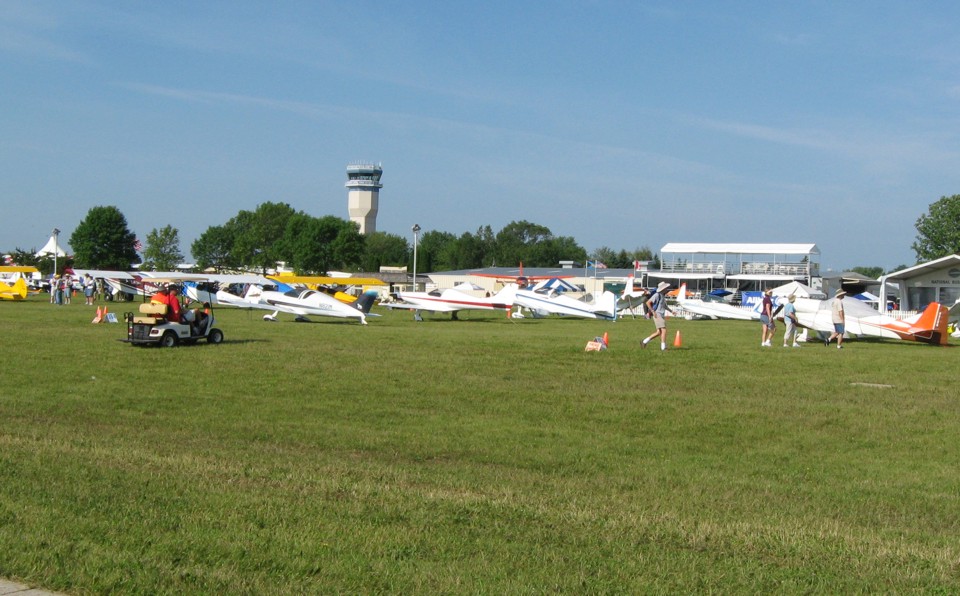 We had pulled up behind the yellow and white Van's Aircraft RV-10 demonstrator N410RV.  I snapped this photo as an airplane is turning final to land on runway 18 RIGHT south of the displaced threshold.  That red and white RV-7 waiting for clearance to enter the runway is Mike Seager in the company RV-7.  N137RV is used for tail dragger transition training for any Van's Aircraft builders who want to train with Mike.  Today as every day of the AirVenture show, the mission for Mike is introductory flights for prospective buyers. 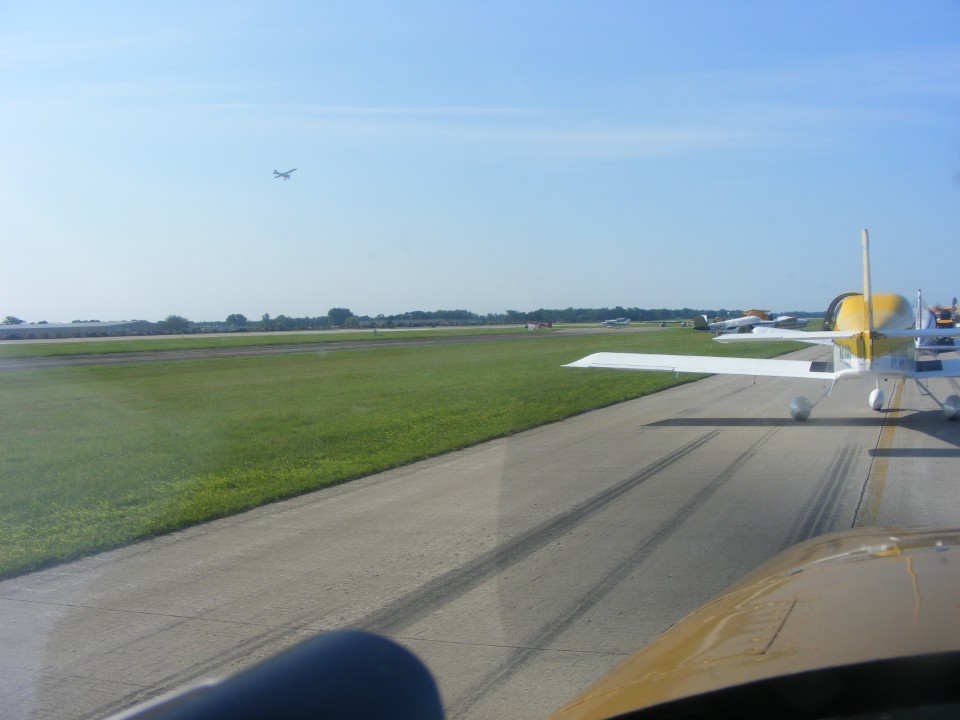 Mike Seager was cleared on to the runway from the head of the line as we pulled up to the location you see here.  You can see his airplane at the left edge of this photo already on the runway, ready to "line up and wait" for takeoff clearance from the tower. 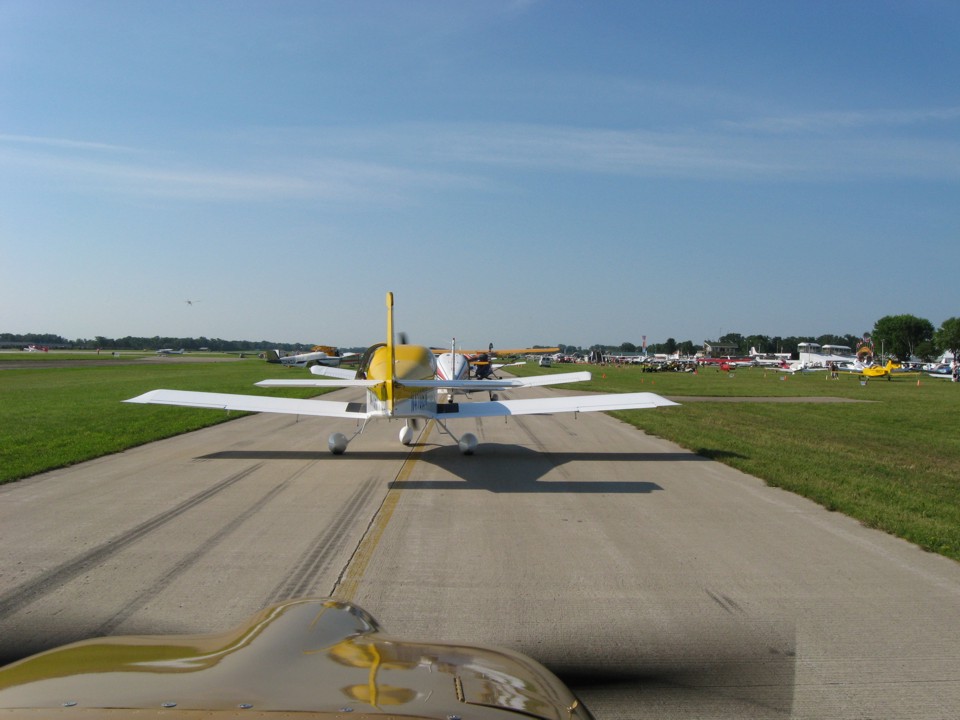 Edward snapped this zoomed photo of the new control tower. 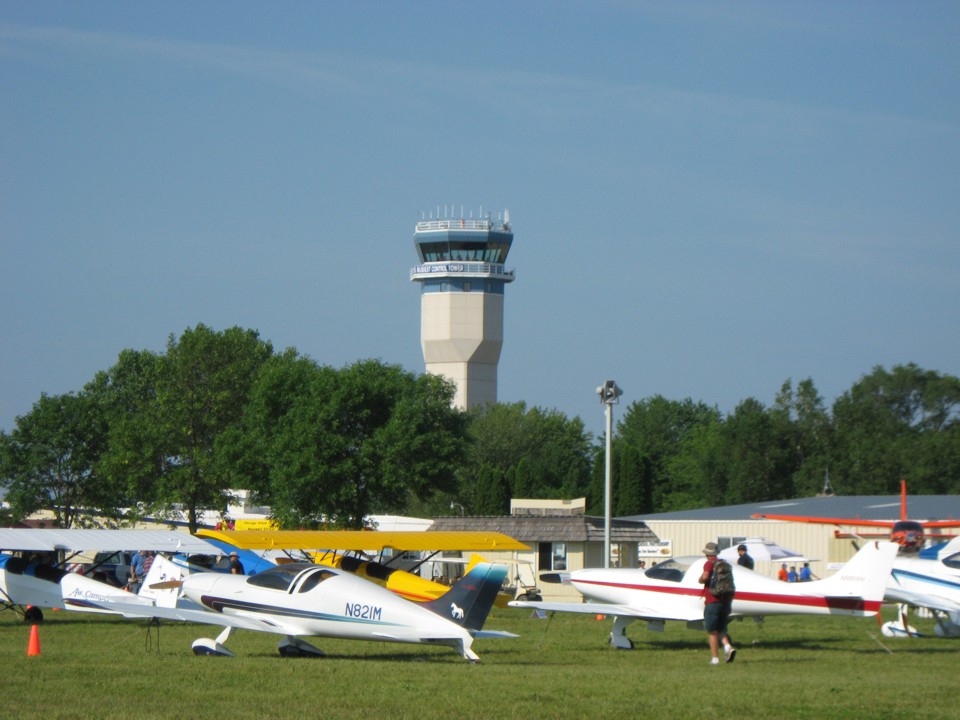 I got my own shot of the tower with zoom activated.  This was cropped from a wider view.  It is not that bad considering it is a hand-held shot with the engine running, etc.  When it was our turn for clearance on to the runway, the controller called us "RV PAPA ZULU" since our 12-inch numbers are clearly visible. 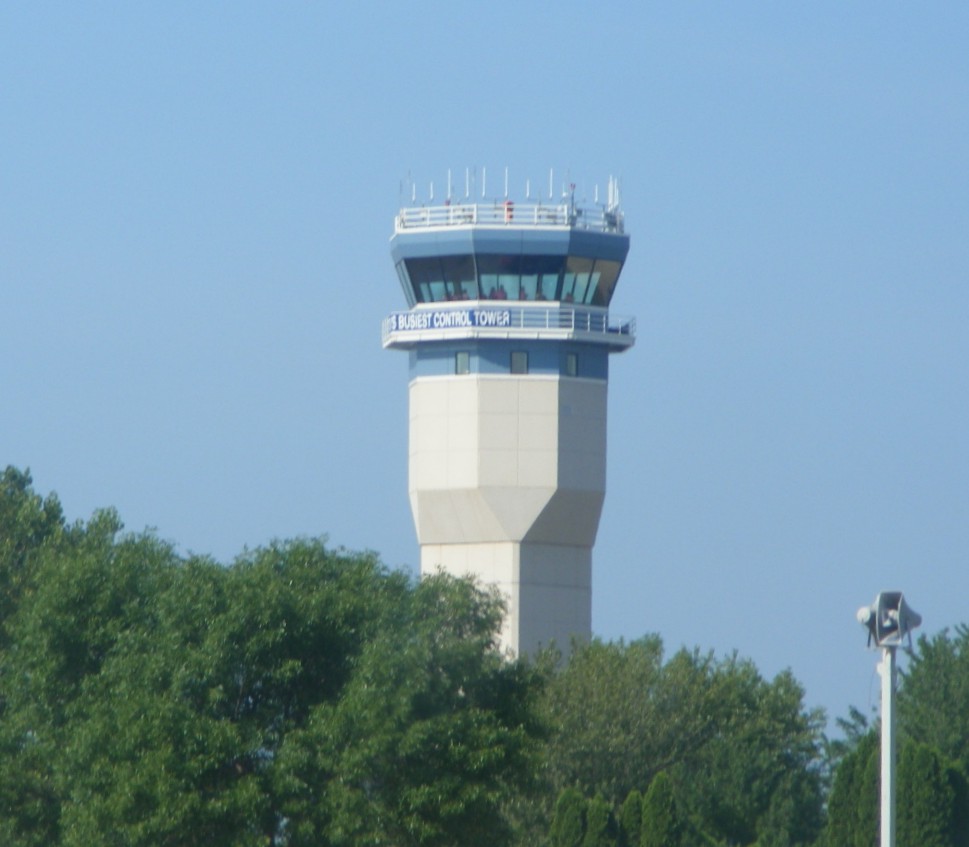 The video camera was recording everything about the takeoff and departure, including our climb to 1300 MSL and cruising south out of the Oshkosh Class D air space.   The video continued recording until the GPS course was corrected and the autopilot was engaged for lunch and a fuel stop at Moberly, Missouri (KMBY).   Edward took this photo at 9:21 AM Central Time showing how soggy the ground is in this area south of the airport.  That golf course down there has water hazards, but look at the field to the right of the golf course, just ahead of the wing.  You can see another soaked field in the bottom left corner of the photo. 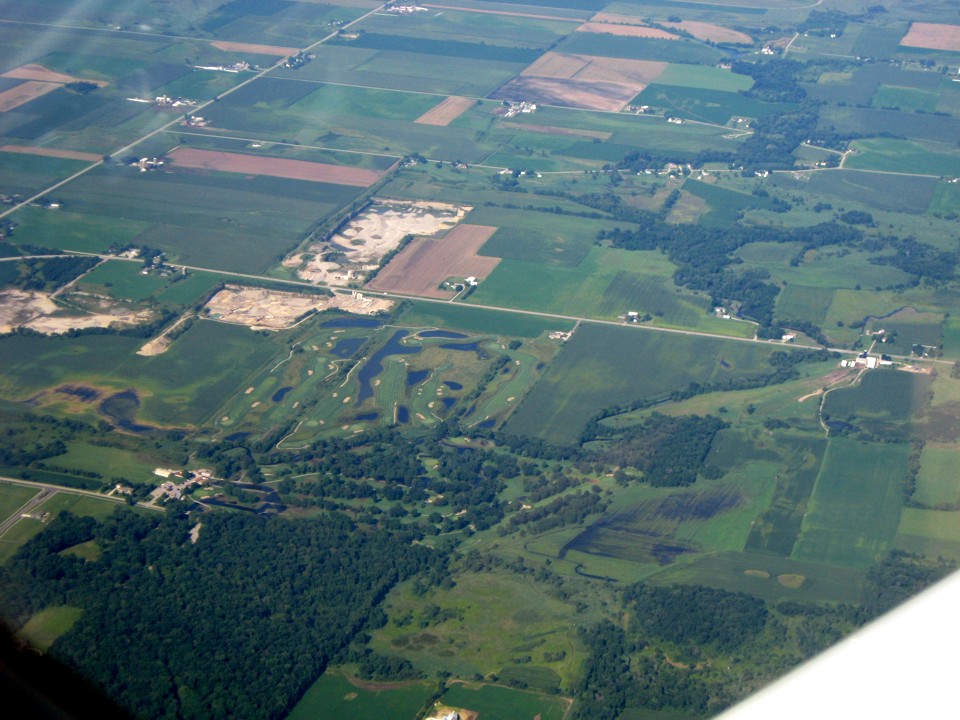