July 26, 2010: Edward took this photo as we started back to our camping site.  One air show performer had just performed a loop at show center and was flying down the runway on the deck northbound.  I am pretty sure he was more interested in the airplane in the foreground which has a big six-cylinder engine up front and retractable landing gear for high-speed cruising. 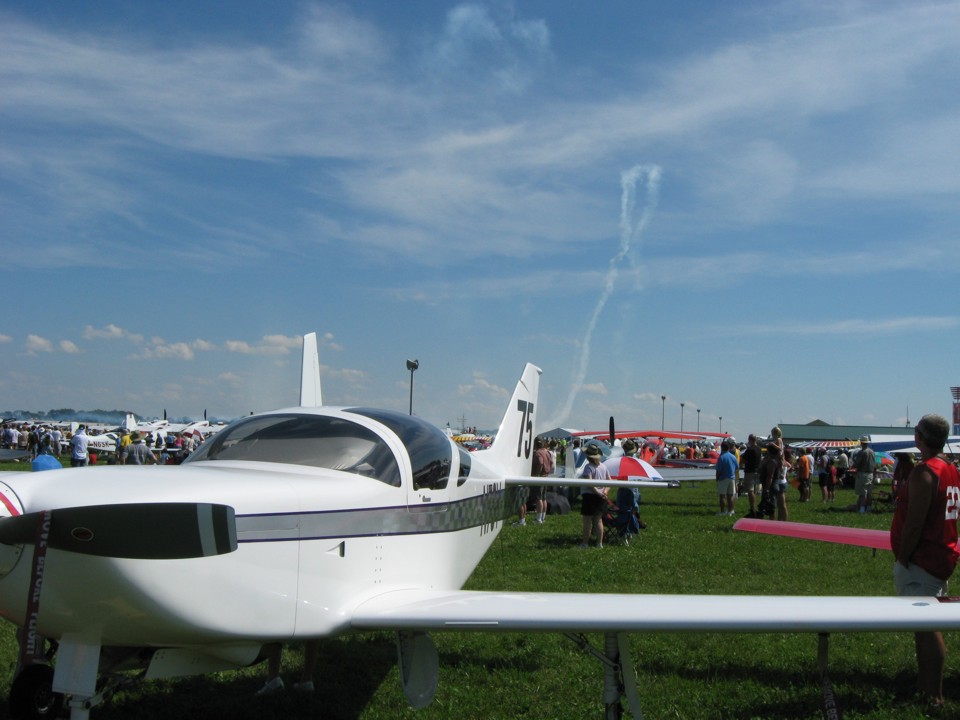 This Burt Rutan designed Vari-Eze from California also got Ed's attention.   Since this is his first AirVenture, he was not completely aware of how the "birds of a feather, flock together" at this event. 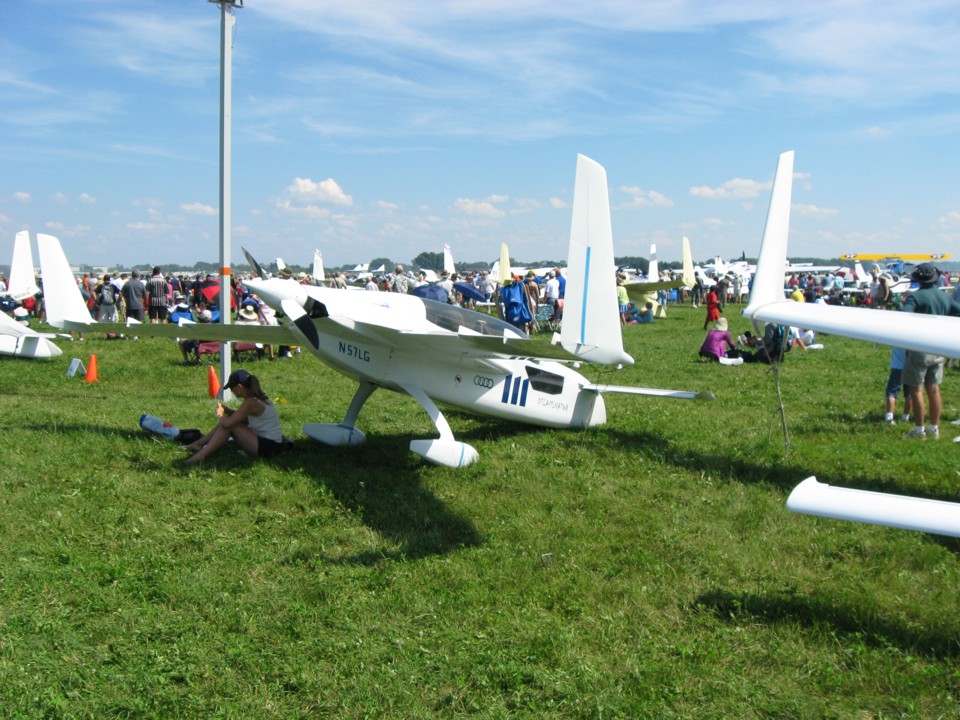 The Questair airplane N94Y also has a big engine, retractable landing gear, and plenty of speed.  All the airplanes in this group share similar features, although they are different makes and models.  That yellow DC-3 with the BIG SMILE is one of the three seen earlier. 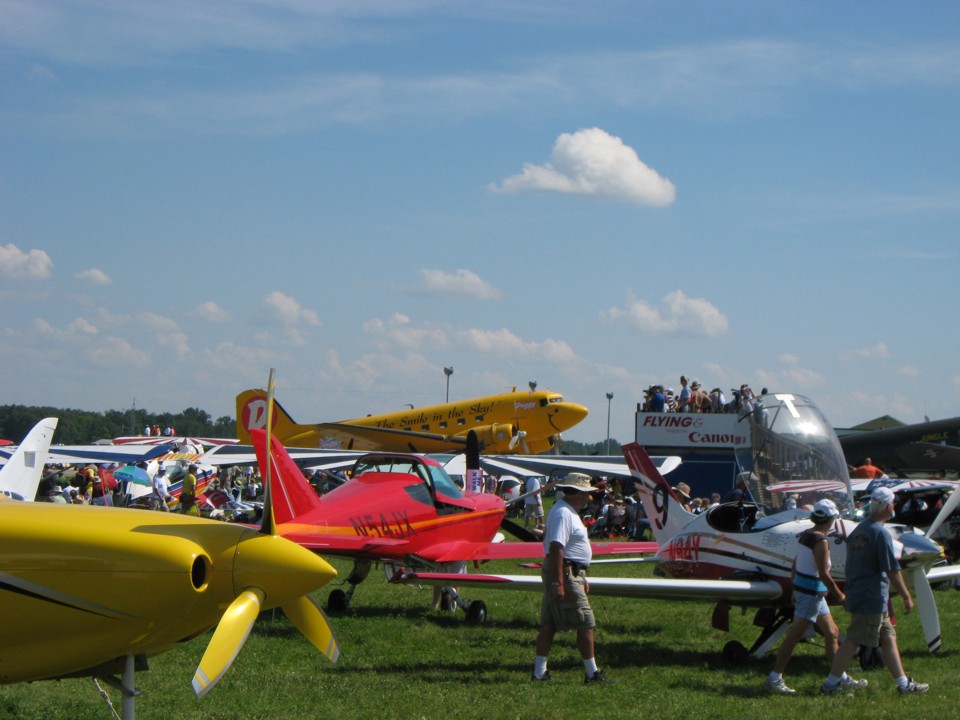 We went down to the camp site, got out the lawn chairs to sit in the shade of my horizontal stabilizer, and listened to the AIR BOSS on the scanner as he coordinated all the airplanes taking part in the air show.   It was hot up on the ramp in that large crowd of people.  Edward got out his video camera and took some videos of the various air show performers.  A couple of builders stopped by to introduce themselves and ask questions about certain parts of the construction of my RV-9A that apply to their project.  Most of these folks stop by with a friendly attitude and ask intelligent questions, but they never seem to follow up after going home with an email to tell me how they are doing with their construction.

After the air show was over we could hear the Chicago concert on AeroShell Square.  We went to a nearby restaurant and had dinner before returning to the airplane camp site.  As the sun got lower near the horizon, the nightly social hour became evident.  Think of this as sitting on your front porch and waving to your neighbors walking by.  Marshall Jacobson and his son were parked on the row behind us and a bit closer to the showers and "other" facilities.  The paint job is from Glo Customs at Roanoke Airport (52F) north of Fort Worth, Texas.  The airplane is based at the Athens, Georgia airport and has been photographed when I visited him back on September 22, 2007 at his hangar. 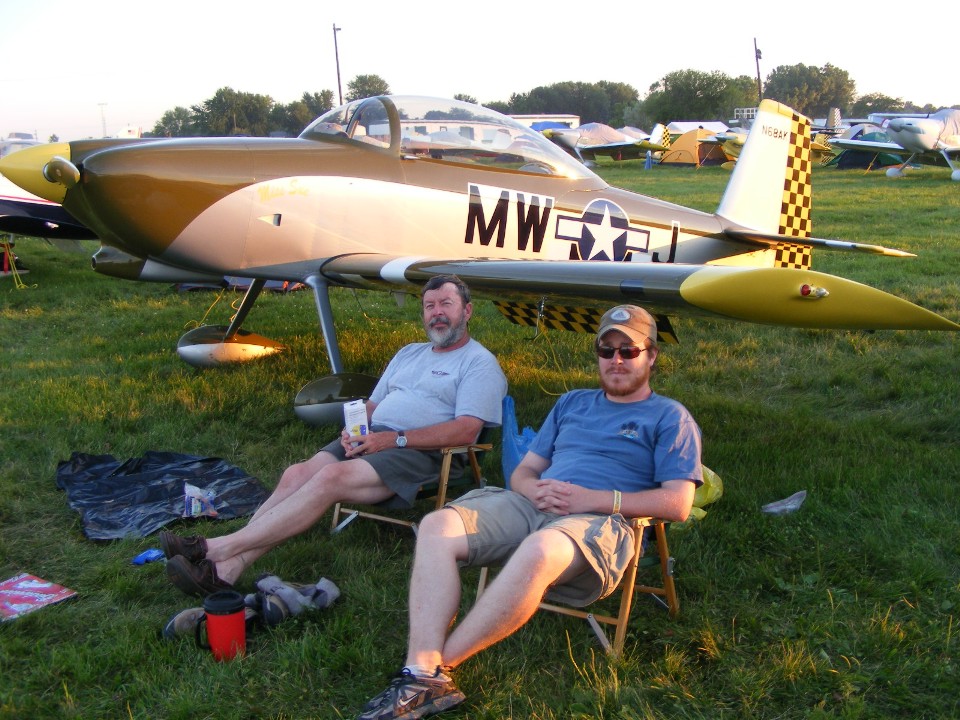 Edward is enjoying the social hour and the tall tales of other pilots.  As you can see, home built camping is more fully populated by late Tuesday afternoon.  Quite a few airplanes came in today while we were "out and about" on the grounds all day seeing the exhibits and other airplanes. 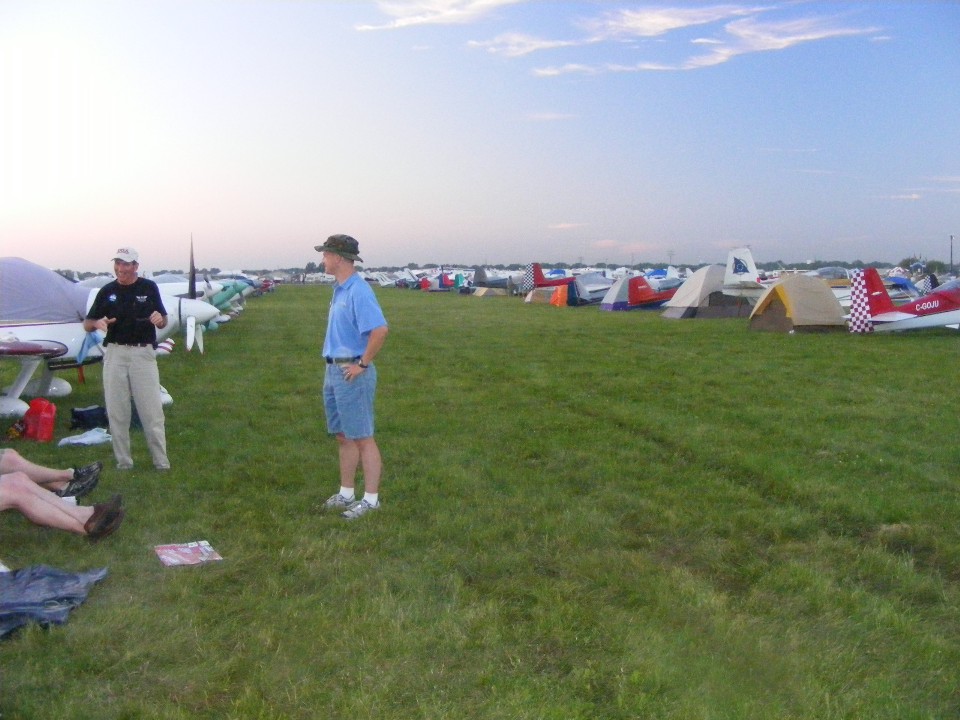 A view to the northwest corner of the camping area shows there are very few empty spaces.  The glow of the setting sun caused this photo to be under exposed.   Take notice of the reflected light from my camera flash being reflected off the wing, and a second time off the side of the fuselage. 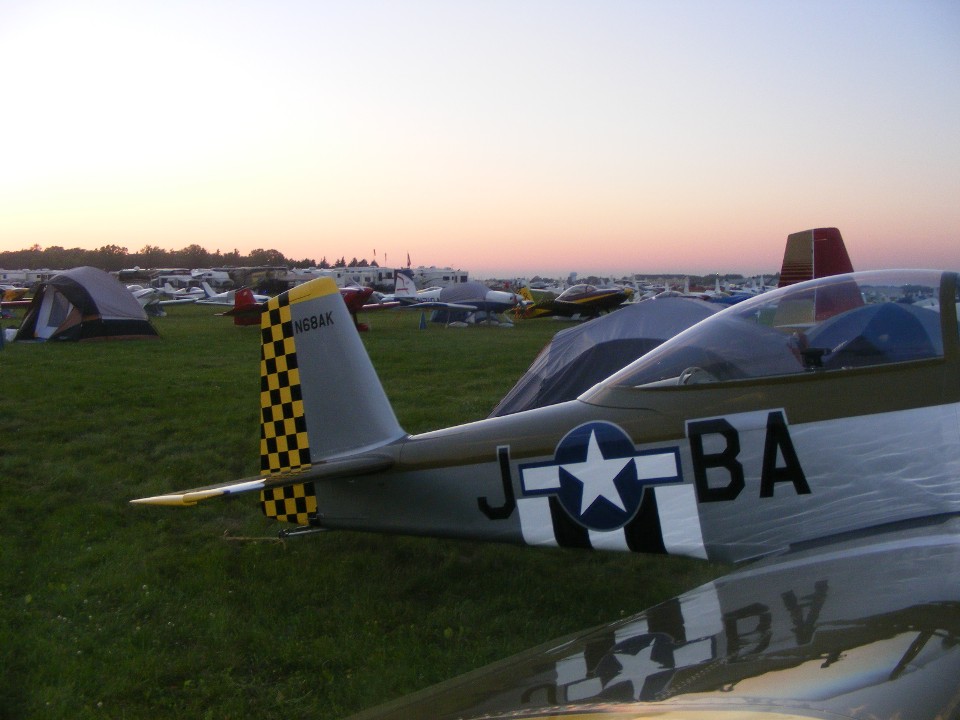 I turned my camera northeast and the exposure was automatically adjusted to show better contrast. 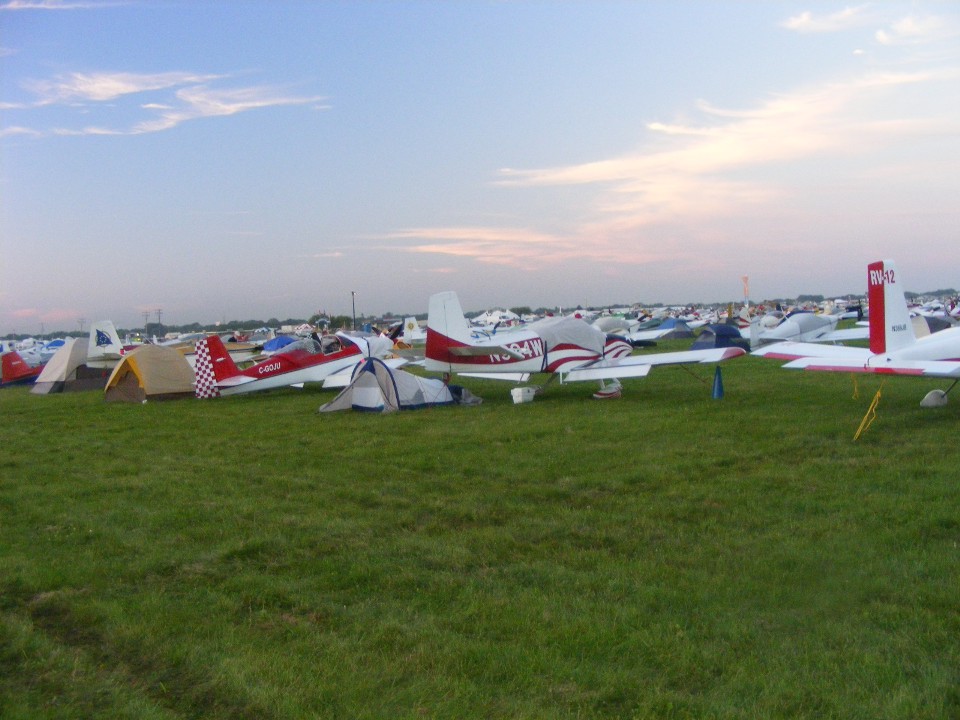 I snapped this out of focus photo at 8:36 PM Central Time of the Bell 47 helicopter makes a sunset sightseeing flight west of the camping areas.   It is just about time to get a shower and turn-in to avoid the mosquitoes.  The flight back to Texas tomorrow will be a long one. 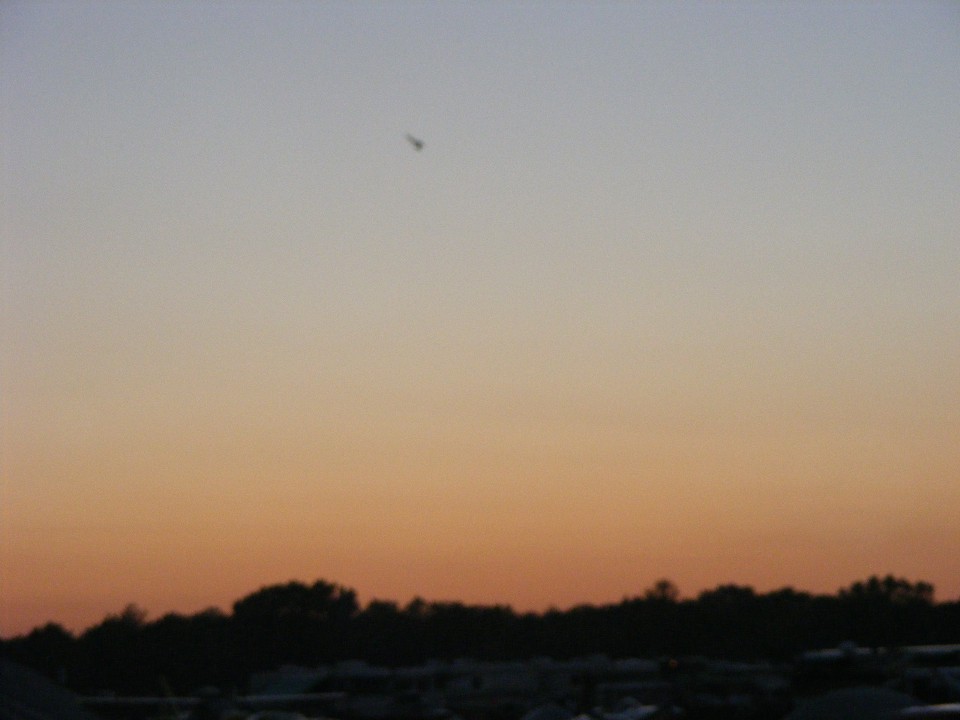