July 26, 2010: I also had the chance to explain the secrets learned from the German ME-262 jet fighter that were incorporated into the F-86 fighters used in the Korean War in the 1950's.  This was the first jet with leading edge slats to allow tight turns in a dog fight with MIG-15s.  The full flying horizontal stabilizer was also part of the secret magic of this airplane.  There is one of these in the USAF Museum at Wright-Patterson Air Force Base.  That particular F-86 in the main building has no aluminum skin on it, revealing all its inner working parts. 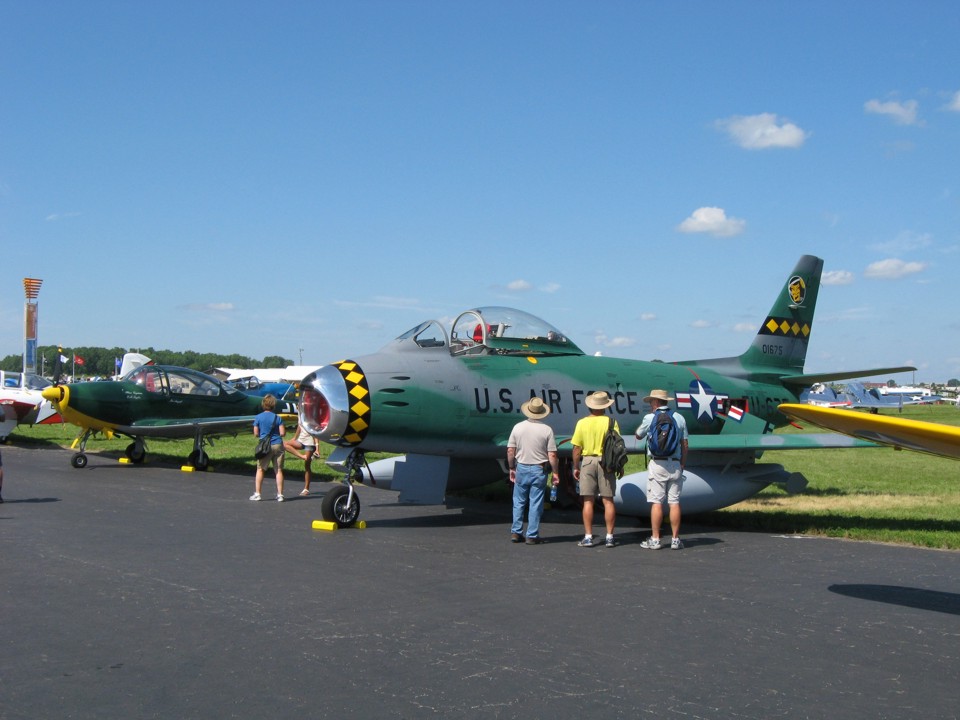 Speaking of German airplanes, here is a Focke-Wulf FW-149D civilian family airplane built in 1957.  A similar airplane built in the USA was the Navion.   Both of them have a large sliding canopy.  You can learn more about the Navion via this web page:
http://www.pilotfriend.com/aircraft%20performance/Navion.htm   My RV-9A has similar cruising speeds as the Navion, 160 MPH. 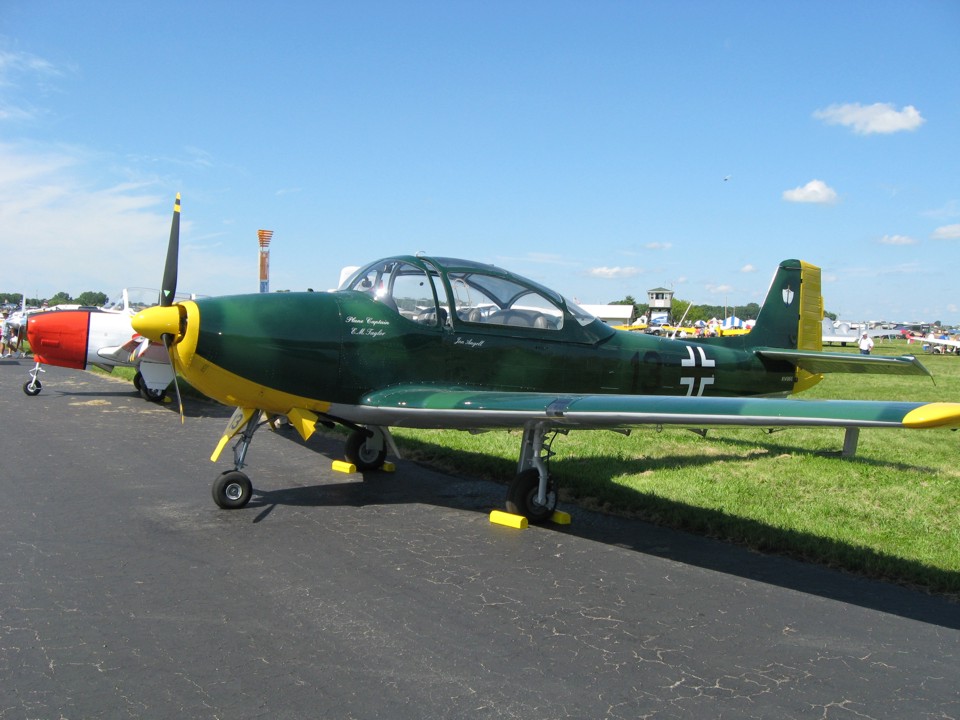 Here is the basic information on the propeller card.  You can see this one is based in Florida.  You can learn more about the history of this type airplane via this web site:  http://www.fwp149d.com/FwP-149D/fwp-149d.htm 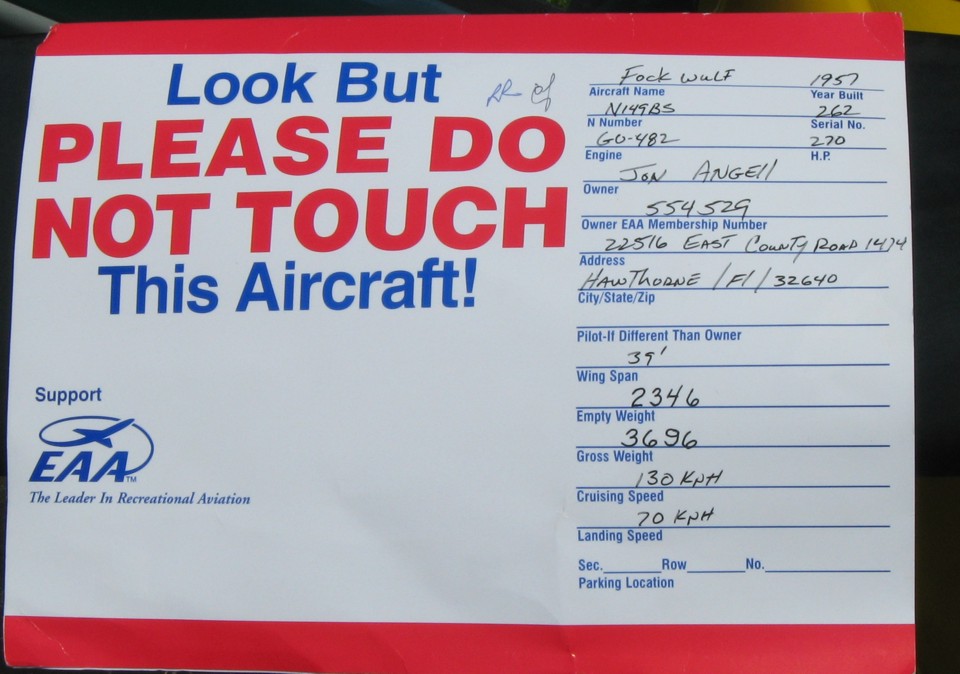 This is the military version of the Cessna 337 with one engine in the front and one in the rear of the fuselage.  Look at the shadow on the pavement for more details of the rear engine and the twin tail booms to the horizontal stabilizer and the twin rudders. 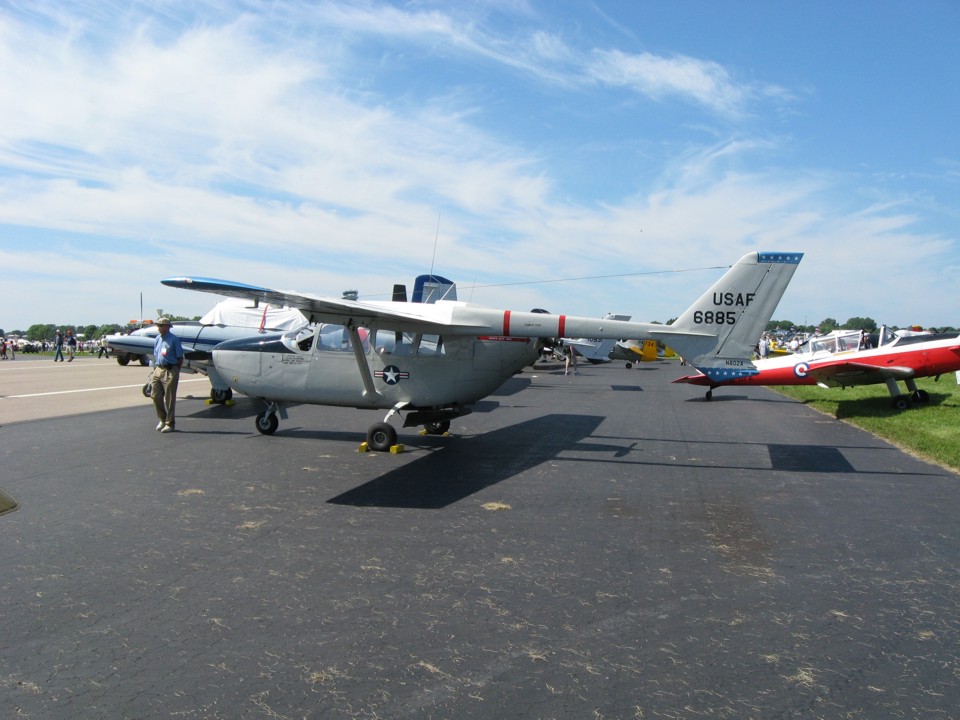 You can see this airplane is known as an O-2A by the US Air Force.  They were flown in Viet Nam as forward observers to mark enemy locations for attacks by fighter bombers.  You can see the civilian owner has a sense of humor with the bullet hole stickers on the side. 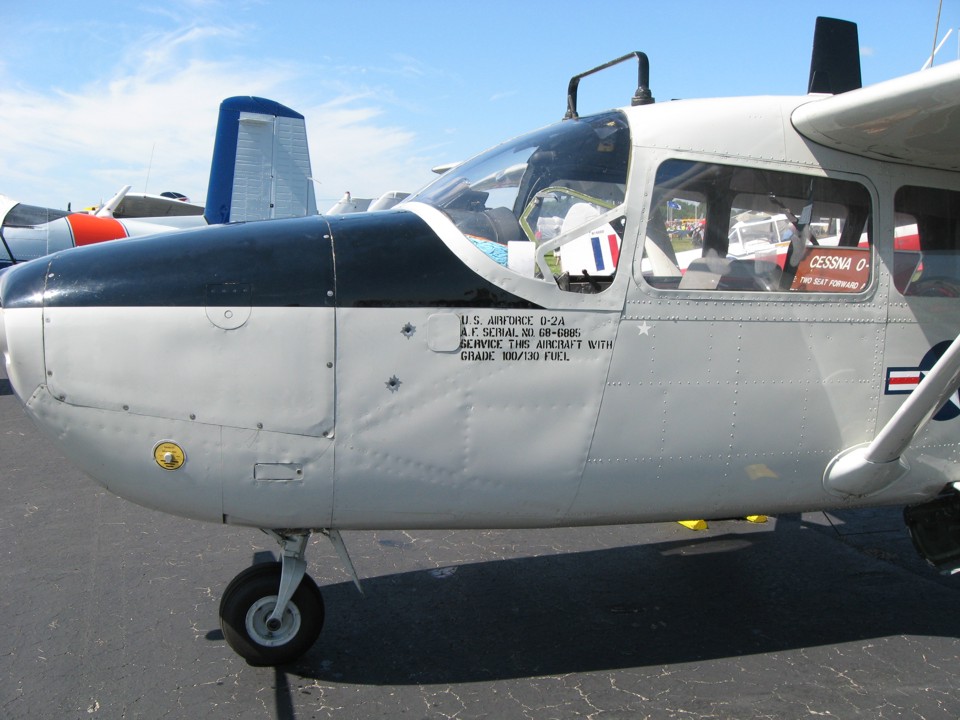 This Corsair has a white radar pod on the right wing.  For those of you who do not know how this airplane got its "bent wings", it has to do with the engine and the propeller producing so much power and being so heavy.  If the wings had bee straight, the landing gear would have been too long and not very strong to support the weight of the airplane with a full load of bombs, rockets, ammo, fuel, etc.  This is not the same airplane seen on a previous page.  Notice the engine cowl on this airplane does not have a white checker board pattern on it. 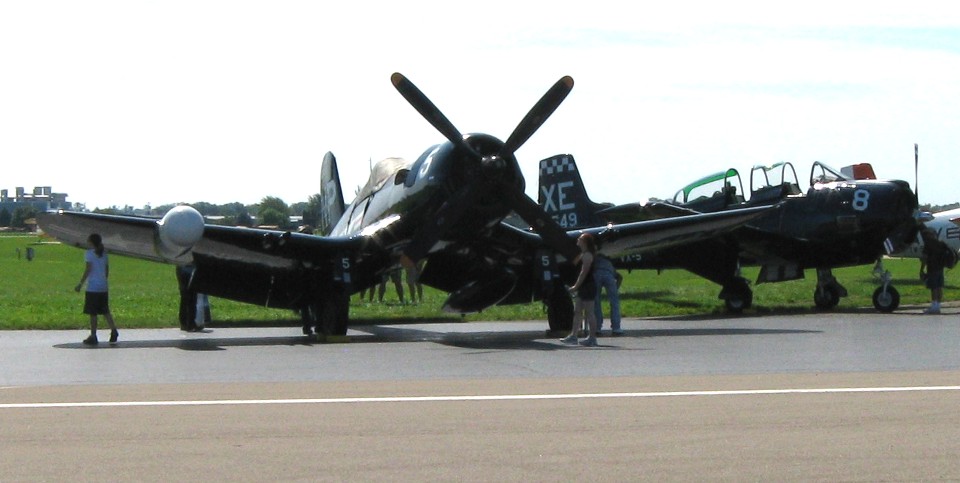 We moved out of the Warbird area and up the road where the commercial exhibits are located on the south side of the taxiway I used to get to home built camping.   These people are looking at the Van's Aircraft RV-12, a light-sport airplane kit.   The yellow wing and the propeller at the right front of this photo is from the factory RV-9A serial number 2, similar to my airplane.  This is a good example of the muddy conditions that earned the name "SLOSHKOSH" for the opening days of AirVenture 2010. We walked up this road on Sunday afternoon with a lot fewer people on it.   The vendors were still setting up their exhibit areas on Sunday.  The view is looking south. 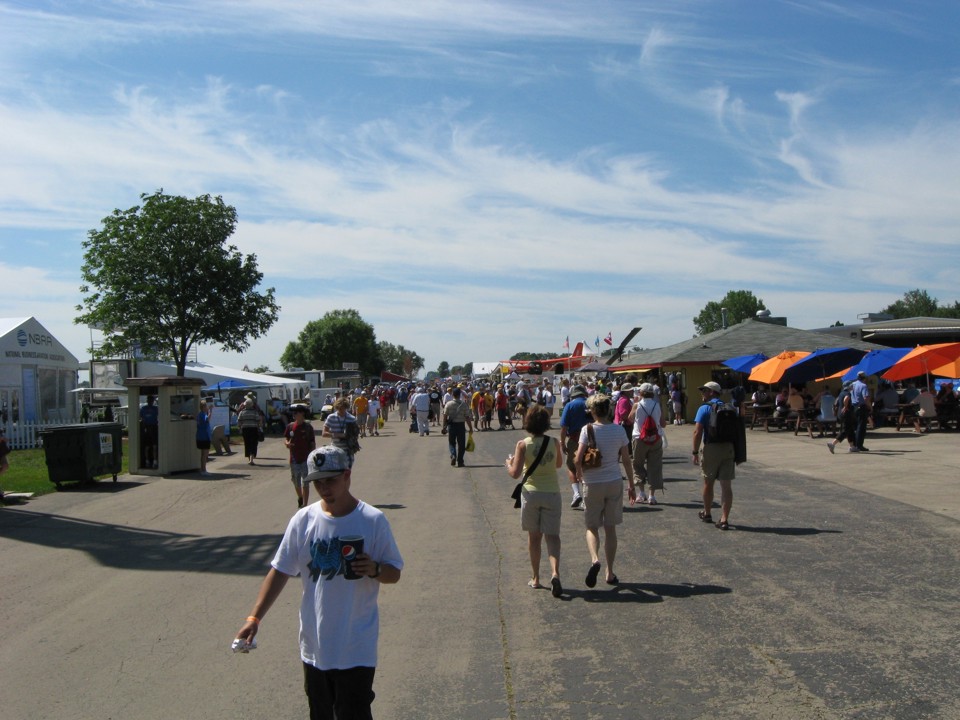 Would you believe an electric helicopter?  There is no gas engine on this one.  The battery locations are evident as needed to maintain weight and balance conditions for stable flight. This drone was on display along with its launcher outside the Federal Pavillion.  Look under the fuselage just in front of the wings and you will see the camera that keeps an eye on the battlefield or the US border.  It has the traditional green and red wing tip anti-collision lights for night flying. Here is a good look at the engine.  It is a Wankel rotary engine burning fuel, not electrons like that helicopter seen above. This view shows some additional details, like the radar transponder antenna (vertical rod with ball on top), a clear stobe light on top, a black GPS antenna, and an air scoop to keep the payload bay instruments cool just in front of the engine.