July 26, 2010: We walked over to the Warbird area to the north of the commercial exhibit area.  Here is the Lockheed P-38 Lightning "Glacier Girl" again, last seen in these web pages from my 2005 Oshkosh trip. 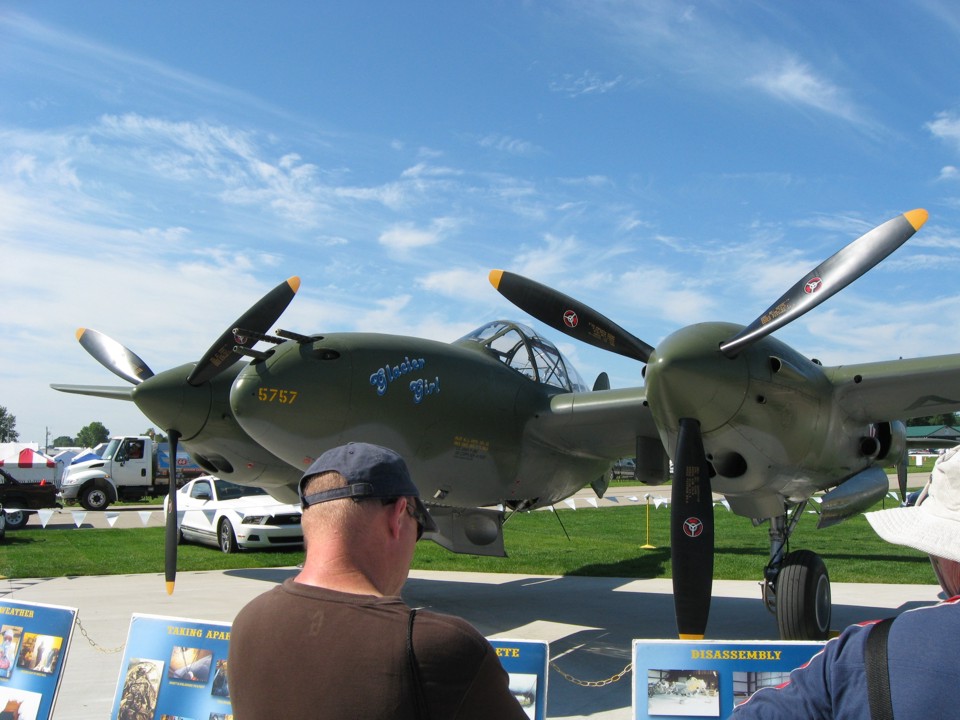 Sitting next to Glacier Girl is this immaculate B-25, Panchito!  Take note of the non-reflective green paint on the engine cowlings and in front of the wind shield for glare reduction for the pilots.  Edward took this photo as you can see by my straw hat on the left side of the picture. 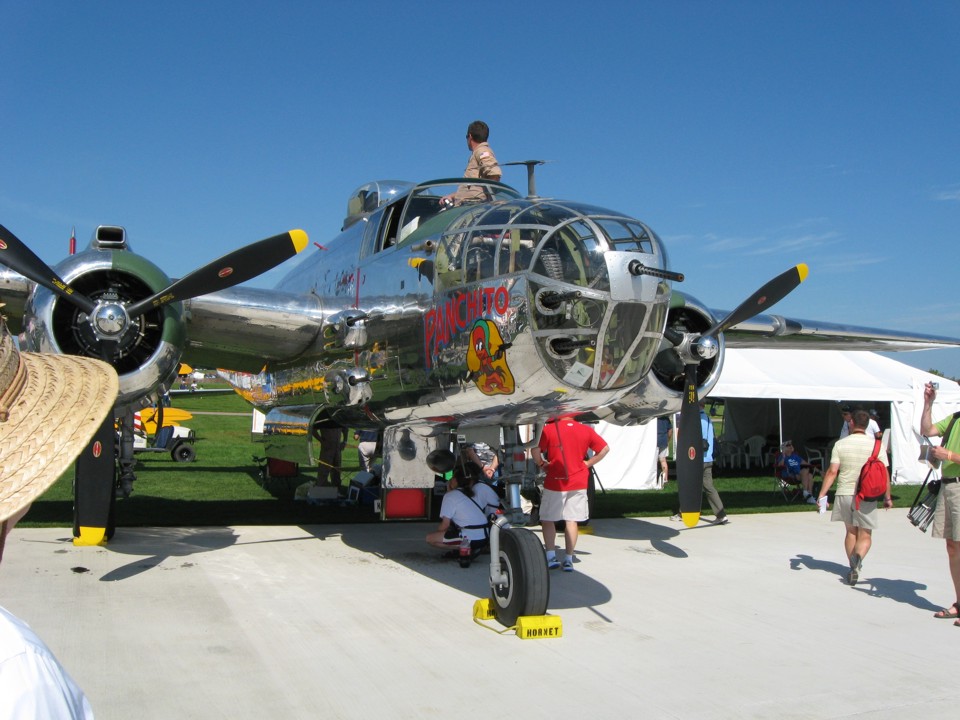 Edward captured an image of himself taking this photo.  He can be seen in the reflection from the polished aluminum skin of the fuselage at the bottom left corner of the picture. 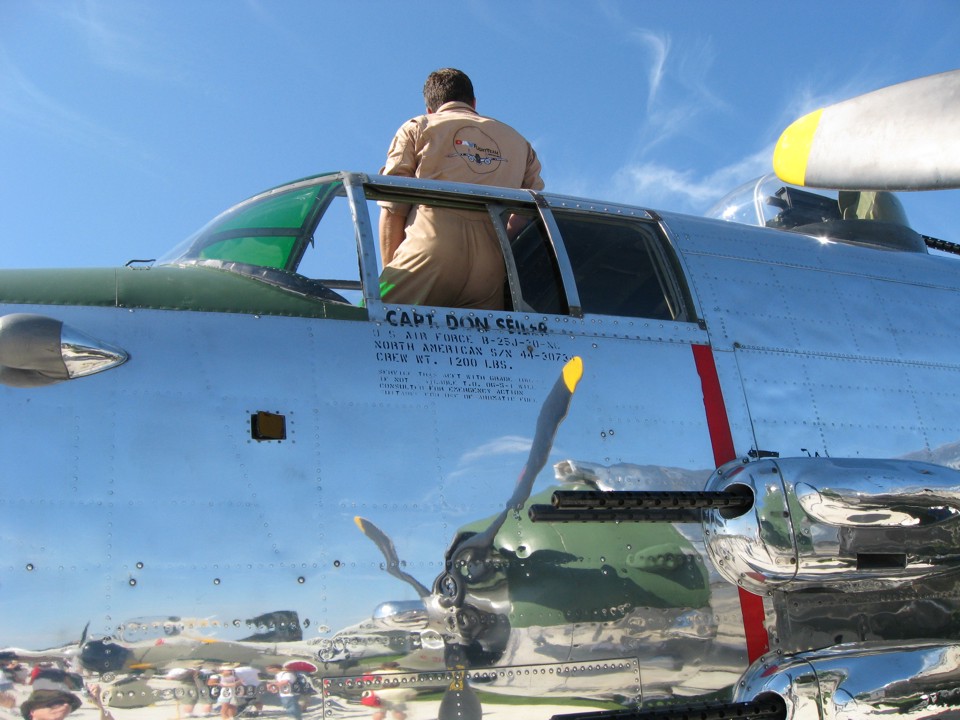 Here is my photo showing the nose area in a wider view.  I wondered about the "pilot" who is obviously up there since he resembles Tom Cruise. 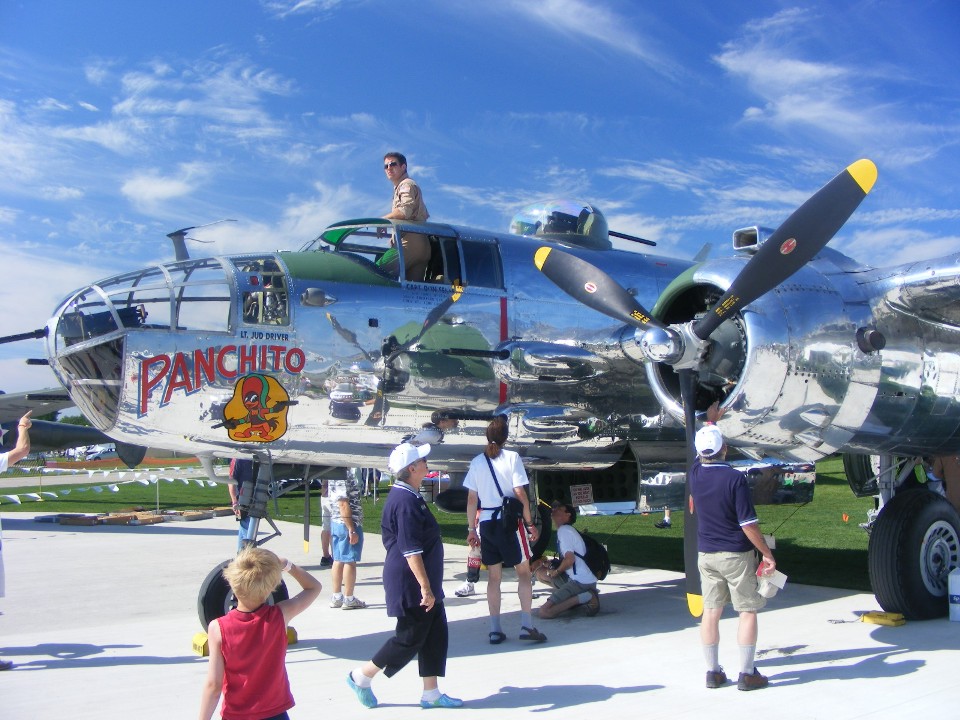 I was surprised to see two P-51 Mustangs with the name OLD CROW on the nose.   I did some online research and realized the triple-ace Bud Anderson flew both versions of the P-51 with these two paint schemes during World War II.  You can learn more about Bud and his P-51 airplane at this web site:   http://www.cebudanderson.com/ 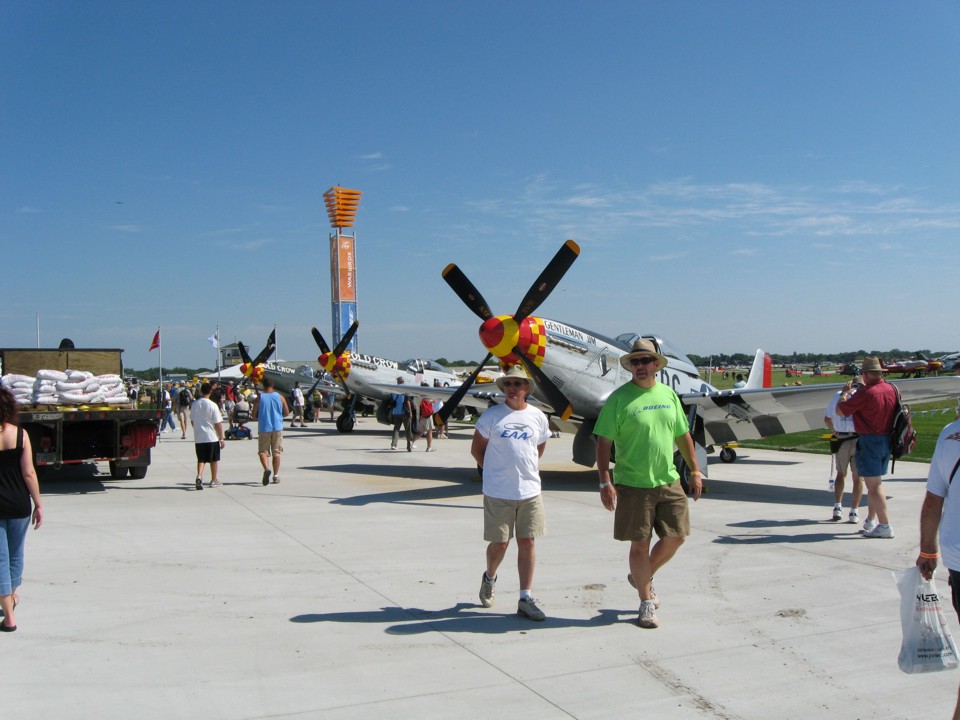 These two Viet Nam war jet veterans are not the only jets in the warbird area. 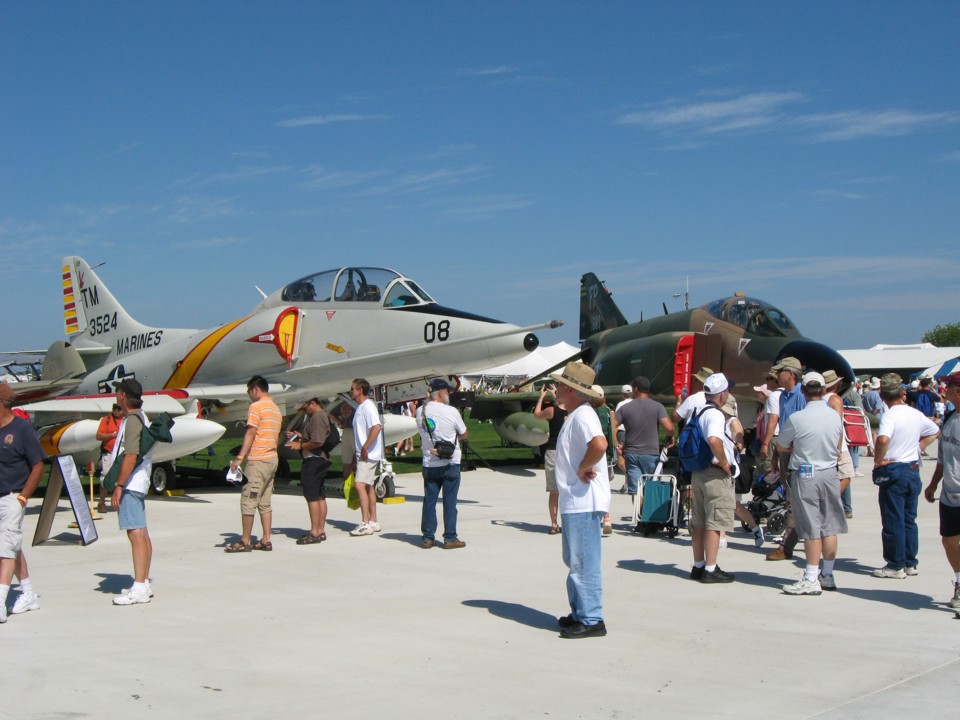 The Japanese called the Corsair "Whistling Death" since US Marine pilots used it effectively in ground attacks in the Pacific theater of operations.   The production variants had different power plant and prop combinations.  Some had three-blade props without the lower cowl scoops.  This one has a four-blade prop and the scoops I mentioned. 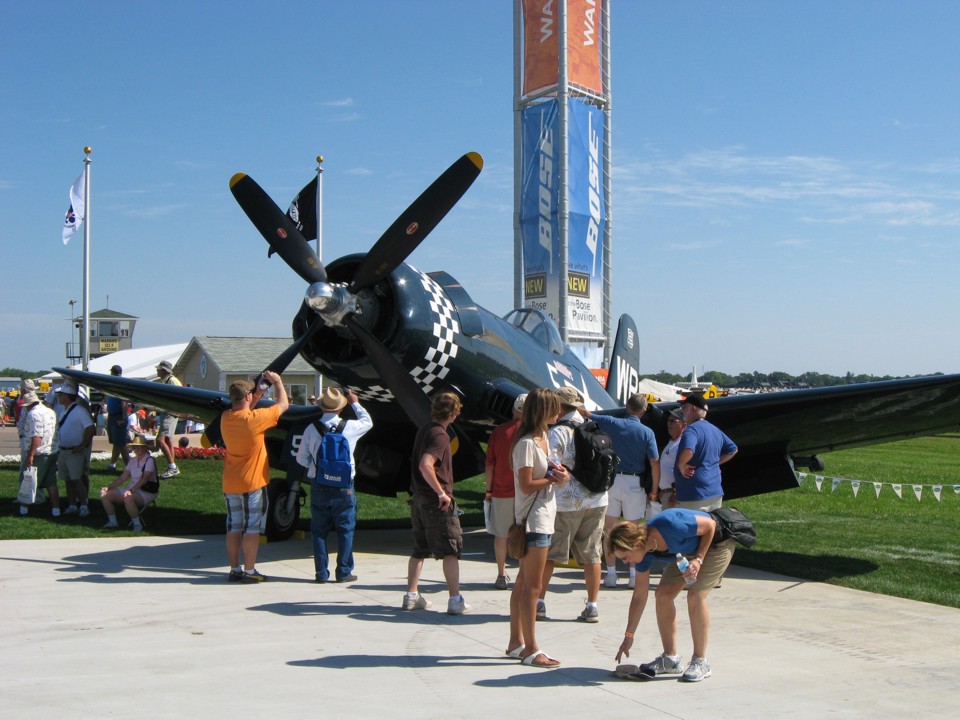 We noticed they were giving away hats to salute veterans in the house behind this Corsair.  Edward and I signed up and got the hats.  I served in the US Army in Korea in 1969, when about 50 Americans were killed by the enemy.  Only 33 of those made the news when the North Koreans shot down one of our surveillance airplanes 13 miles off the coast of North Korea.  Edward was in the first Gulf War with the US Air Force in Saudi Arabia.  The base where he worked was hit by Scud missiles.  While we were standing in line, Edward took this photo of the EAA B-17 "Aluminum Overcast" as it flew over giving expensive rides for those who signed up. 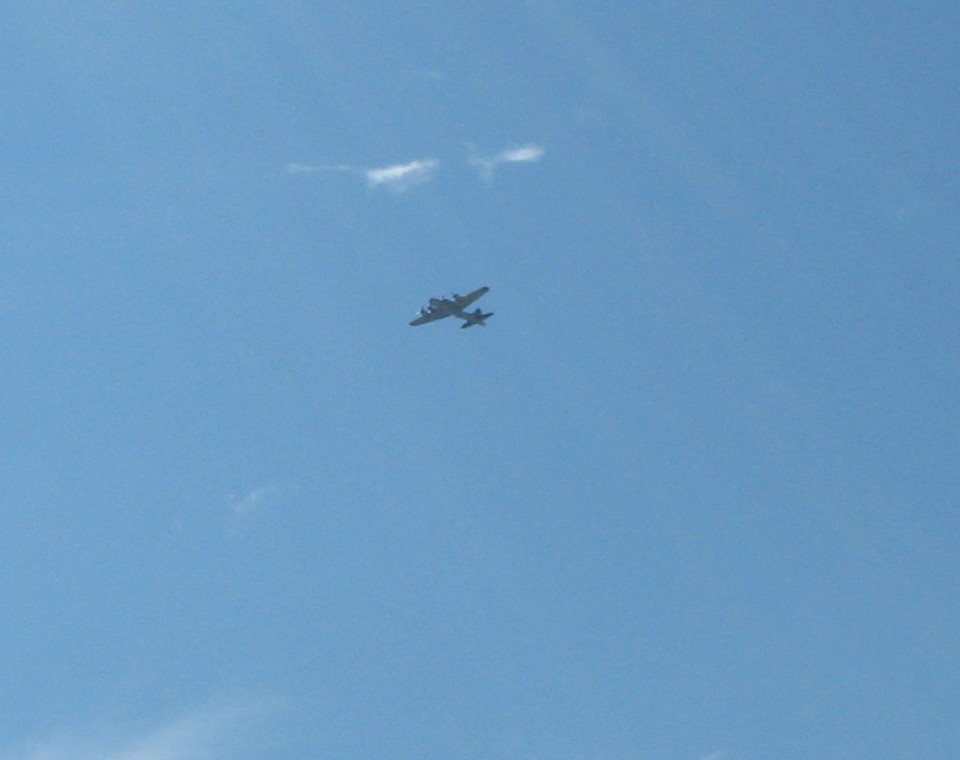 Warbird trainers from the Eastern Block countries are available at a reasonable price.  I have seen a couple of them at the Moontown Airport near Huntsville, Alabama. 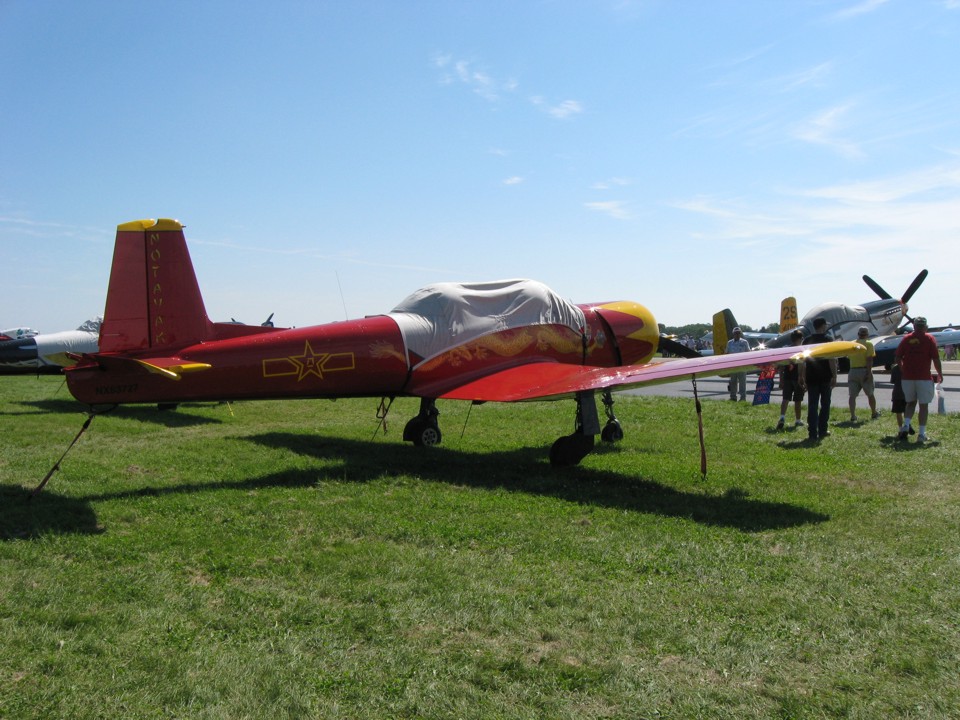 Here is another one.  Take a look at the propeller since this engine rotates the opposite direction from most airplanes.  The cooling vanes at the intake to the cowling are closed in this photo.  This is a Russian design.  Those vanes are closed until the engine warms up in winter flights. 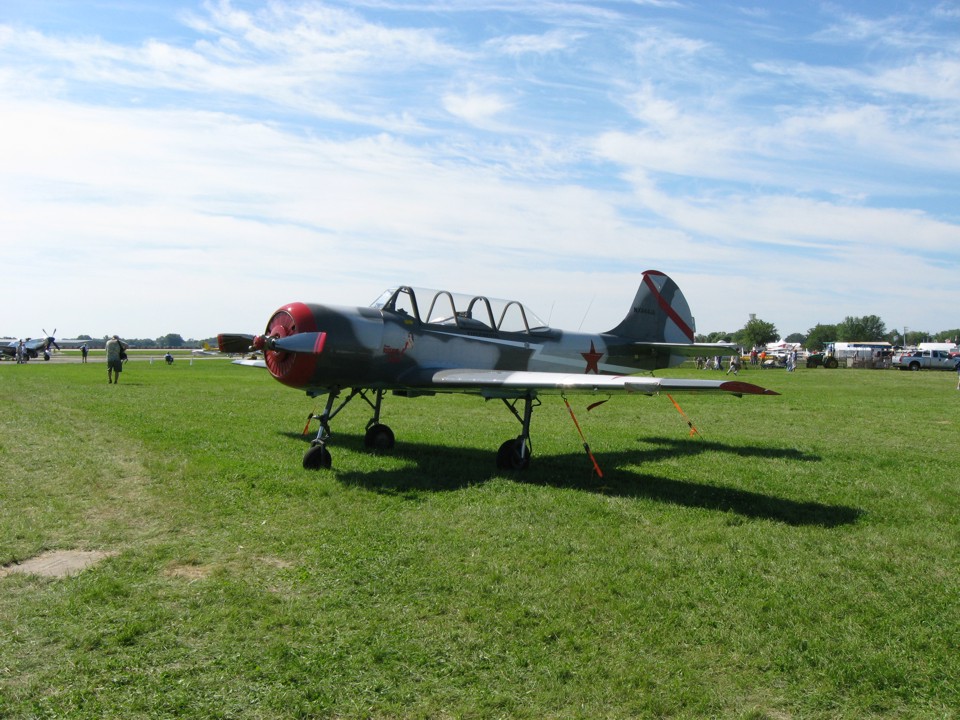