July 26, 2010: As we walked over to the north end of the exhibit area, we passed by home built parking behind the row of exhibit tents and trailers.  This electric motor glider was being demonstrated.  I noticed the motor pod was being lowered as we approached.  The motor is stowed in the fuselage behind the man seen standing behind the wing.  It is hard to see the horizontal stablizer from this side view. 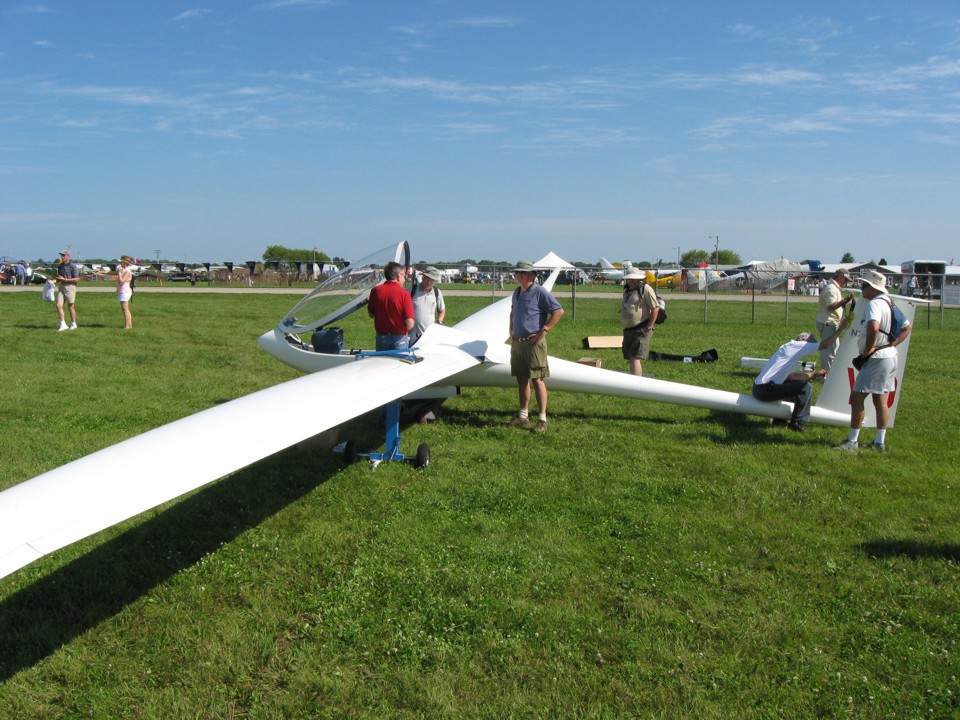 Here is a photo taken later showing the engine pod in the raised position, ready for takeoff.  The T-Tail horizontal stablizer is visible here. 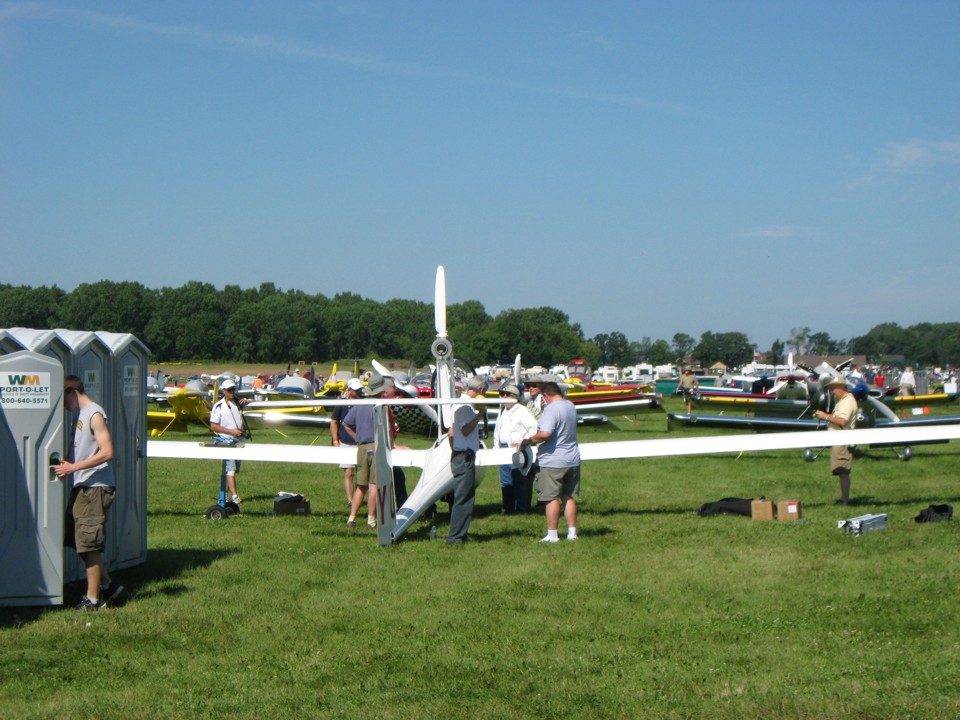 Edward took this photo of this very sharp looking RV-4.  The taxiway from runway 18/36 to home built camping is seen in the background.  Warbird parking is on the other side of that taxiway. 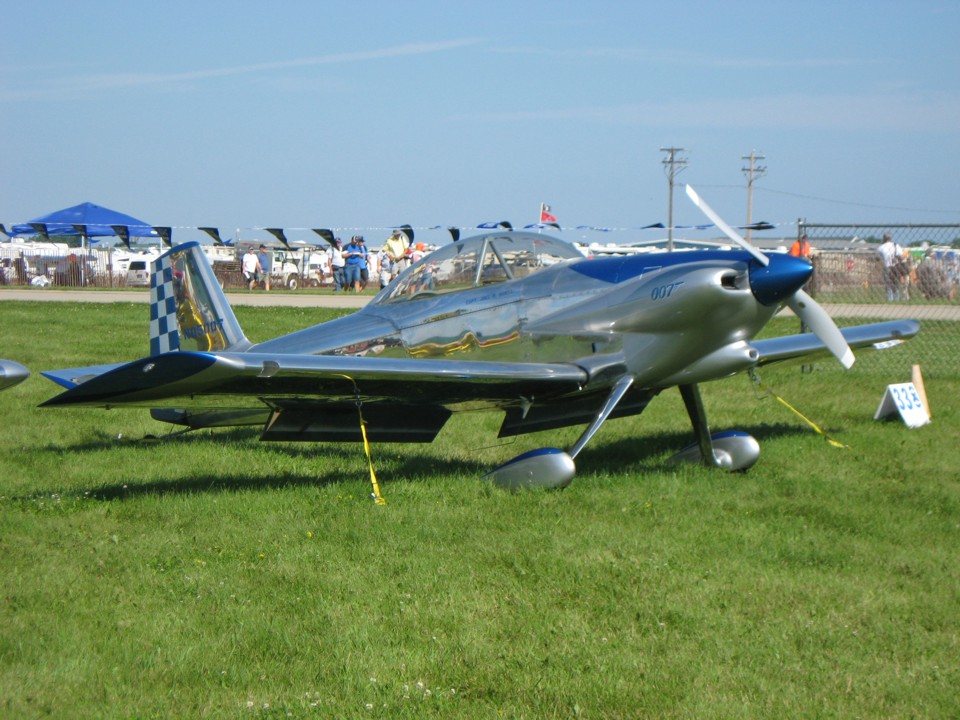 Edward is learning the difference between the RV-4 and its CNC-designed bigger brother, the RV-8 as seen here painted to resemble a P-51. 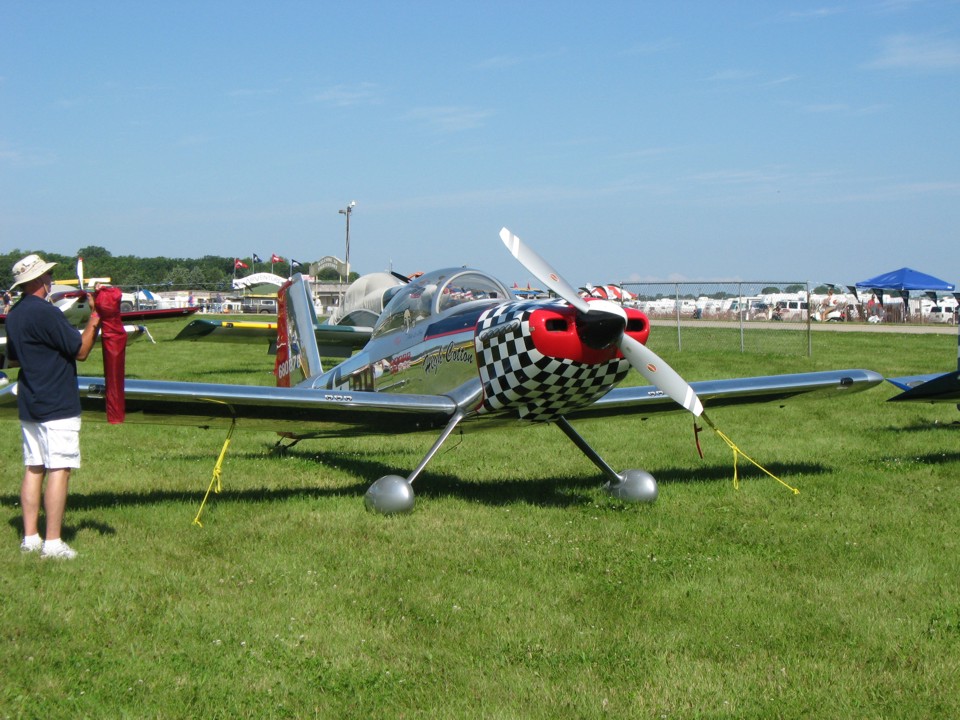 Danny King is here from the Fort Worth, Texas area with "Beautiful Doll."  This parking area is a bit higher than where we are standing to take this series of photos. 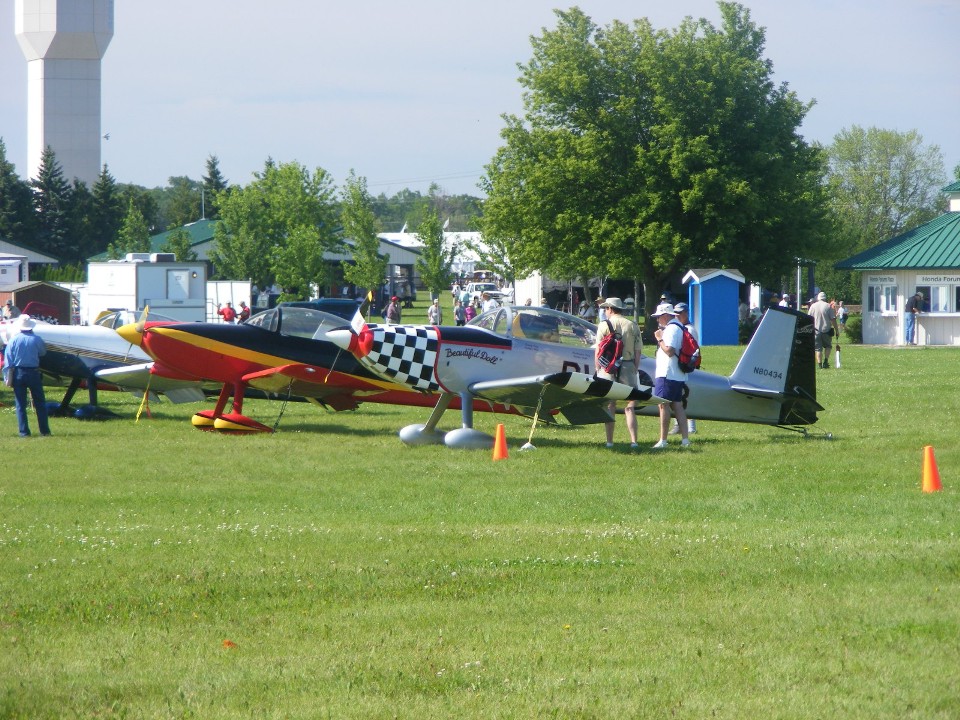 Looking at this photo, it is easy to see where the wet areas are still not ready to accept parked airplanes.  The higher ground is back toward the road that runs in front of home built camping and Fighter Town across the taxiway we came in on yesterday. 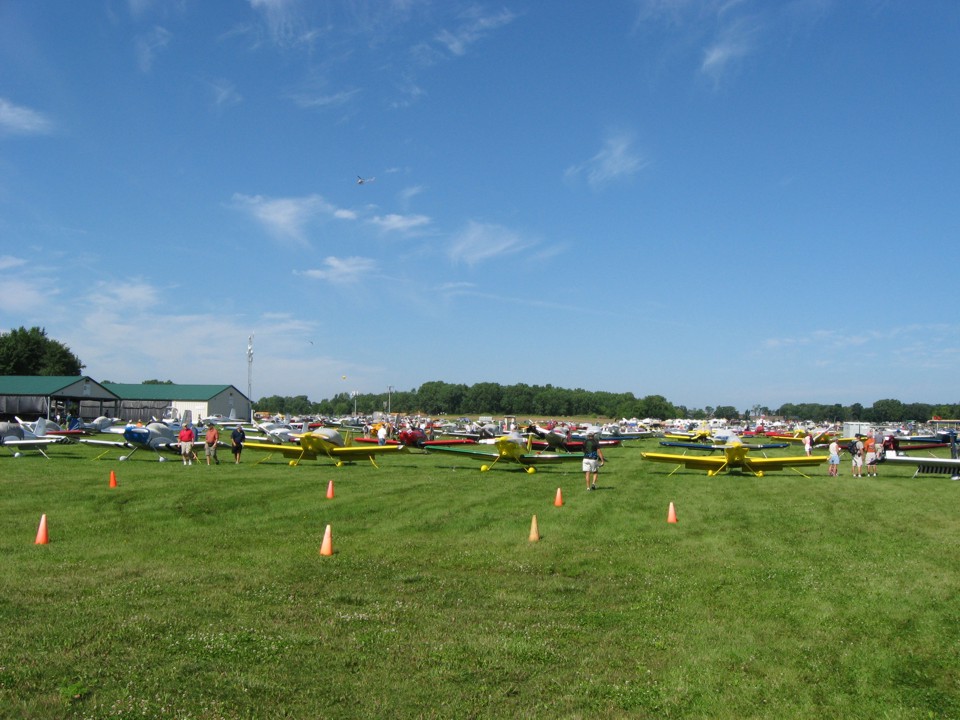 This smaller replica P-51 uses a V-6 automotive engine with a pair of exhaust stacks from each engine cylinder to simulate the six exhaust stacks on each side of the original Rolls-Royce Merlin V-12 engines in the real P-51 Mustangs.  http://www.titanaircraft.com/ 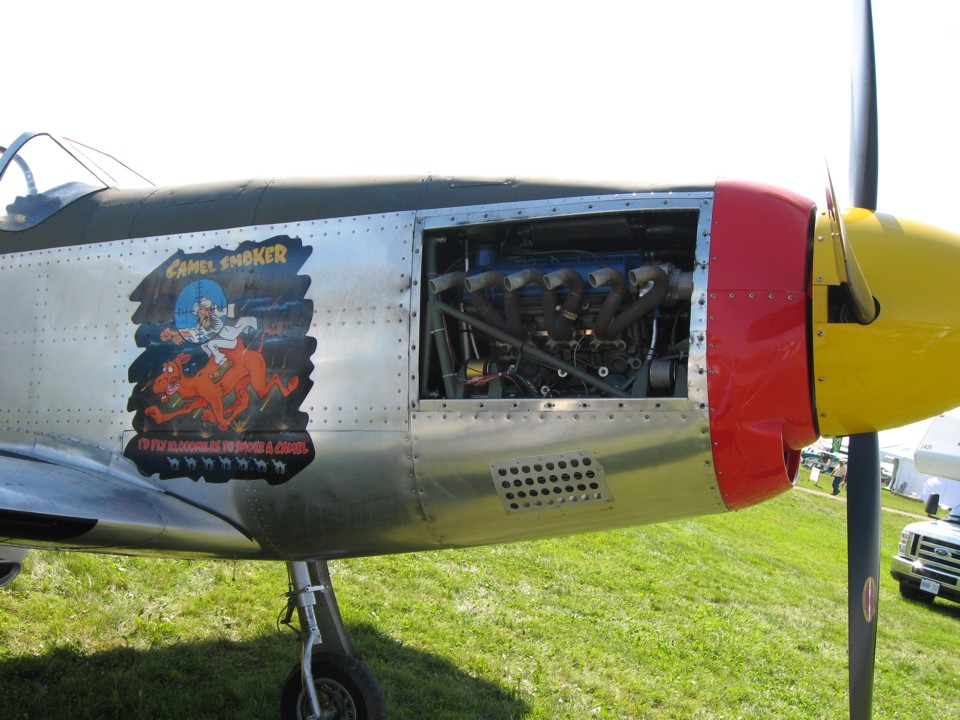 These are sharp looking replicas from Titan Aircraft.  They call them T-51 three-quarter scale replicas.  This one has a more powerful automotive engine and a higher cruising speed.  The landing gear is retractable. 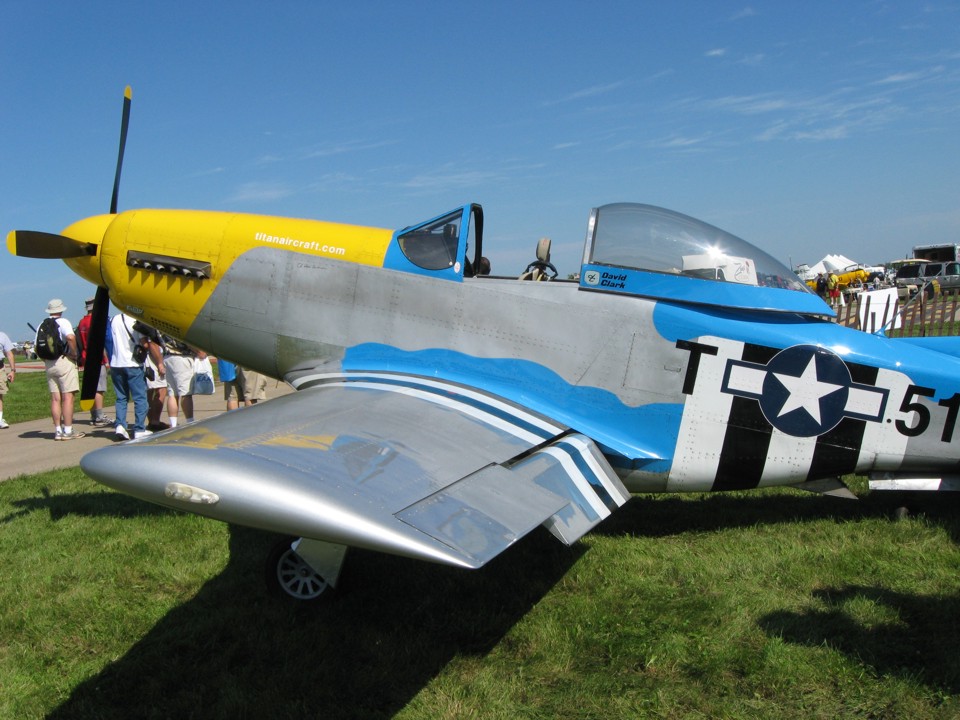 Up closer to the flight line, this Backcountry bush flyer kit plane is equipped with very large tundra tires. 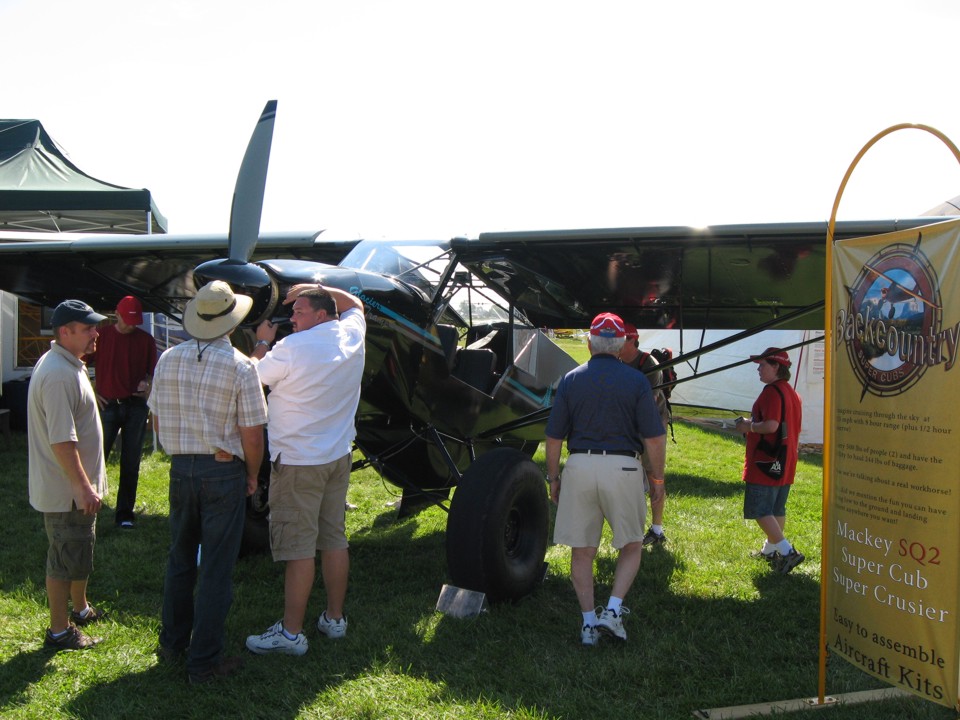 How many of you have seen the James Bond movie where he flies away in a micro jet?  The airplane in the movie was a Jim Bede designed BD-5J jet similar to this one and flown in the movie by air show pilot Corky Fornov. 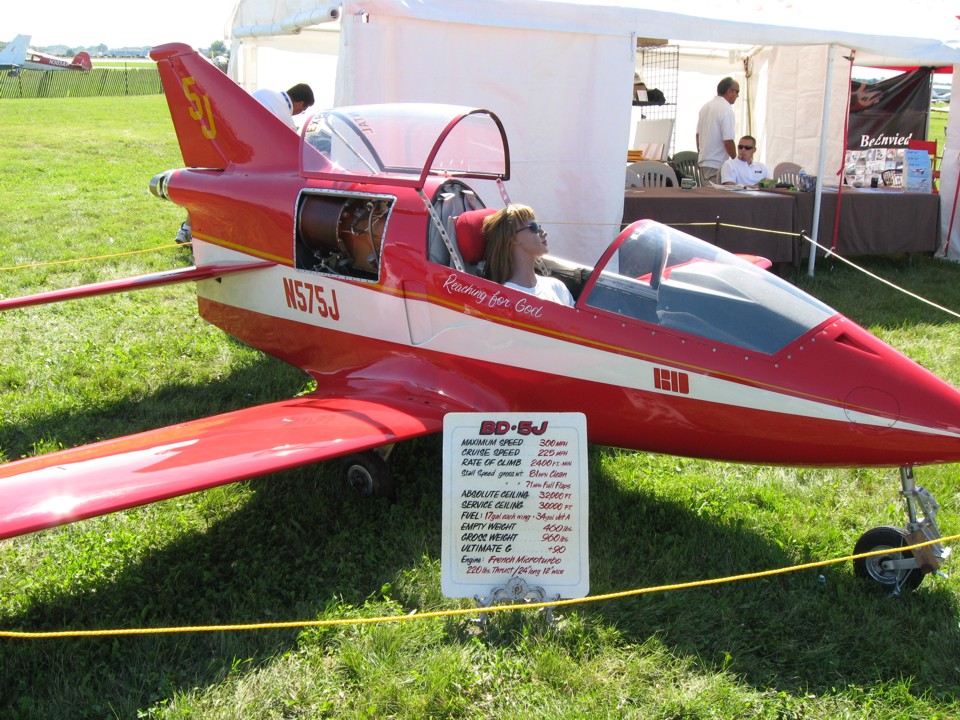