July 26, 2010: Edward is getting the most from the photos from his first Oshkosh AirVenture experience.  He snapped this sunrise telephoto image looking across the field of parked home-built airplanes.  The majority of them are Van's Aircraft designs.

Here is a wide shot of that same scene above.  The time stamp on this photo is 5:39 AM Central Time.  The airport will open at 6 AM. 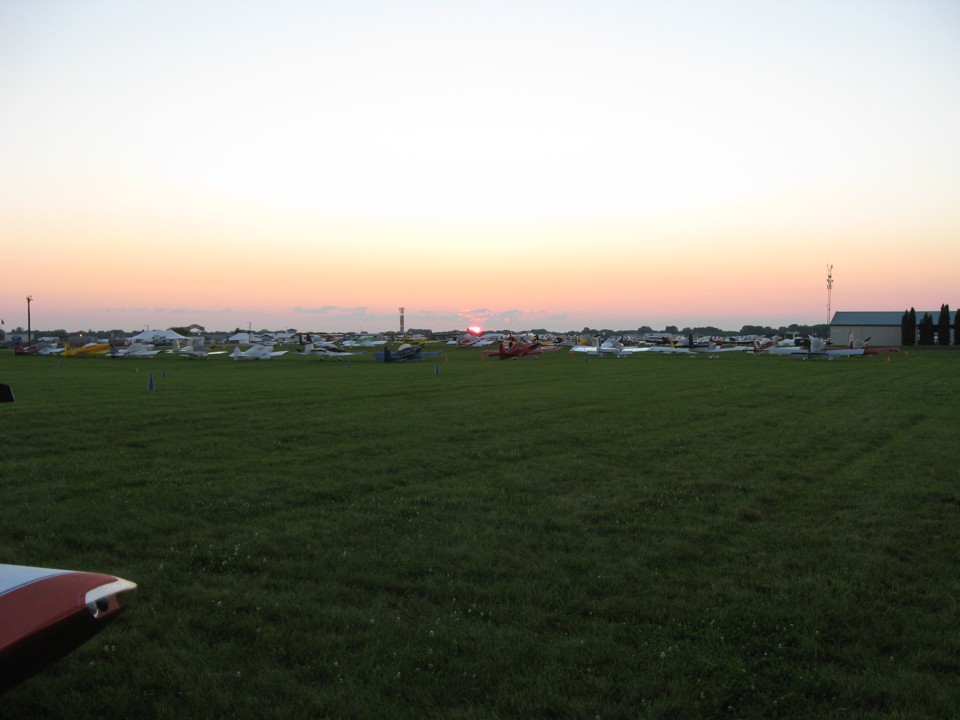 We quickly discovered the restaurant near our camp site did not open until 7 AM, so we headed down to the Warbird Cafe that opens at 6:30 AM to get a good start to our day.  After we had our meal, we walked back to the camp site to get ready for the day's activities.  My dental hygienist would be proud of me for bringing my WaterPik with me on this trip.

By the time we headed out past the front row of parked RV's, it was 9:41 AM as we passed this fuel-injected RV-8 with a US Navy-inspired paint scheme.  The airplane is built by Donald McNamara from Elkhart, Indiana.  It has been flying since July 2009.  (You may have noticed my son Edward has his own Aladdin RED CUP, also filled with ice water from the restaurant.) 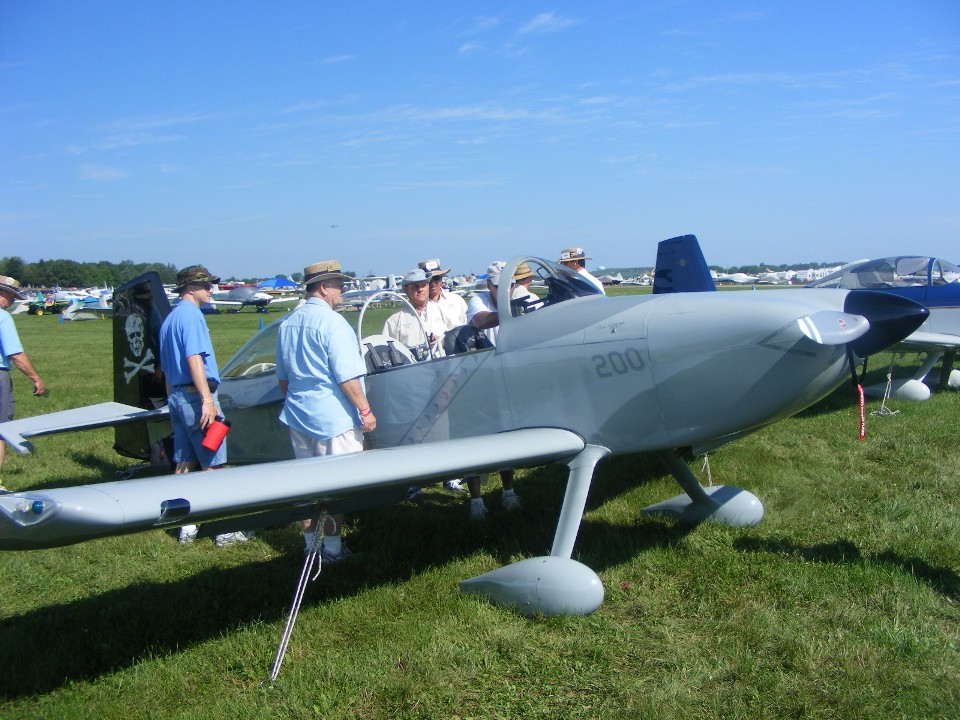 Here is the F-14 Tomcat from the USS Nimitz that inspired the paint scheme above. 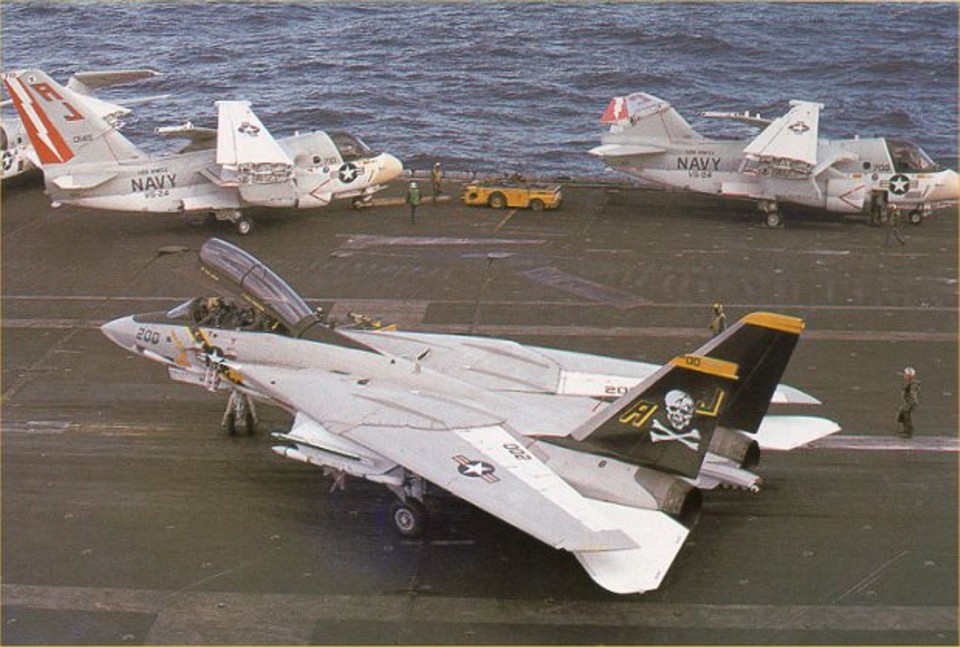 The paint schemes were "toned down" in 1984 as you can see by this photo of the same airplane.  You can read the story of these famous airplanes via this web page:  http://www.almansur.com/jollyrogers/jollytomcats.htm 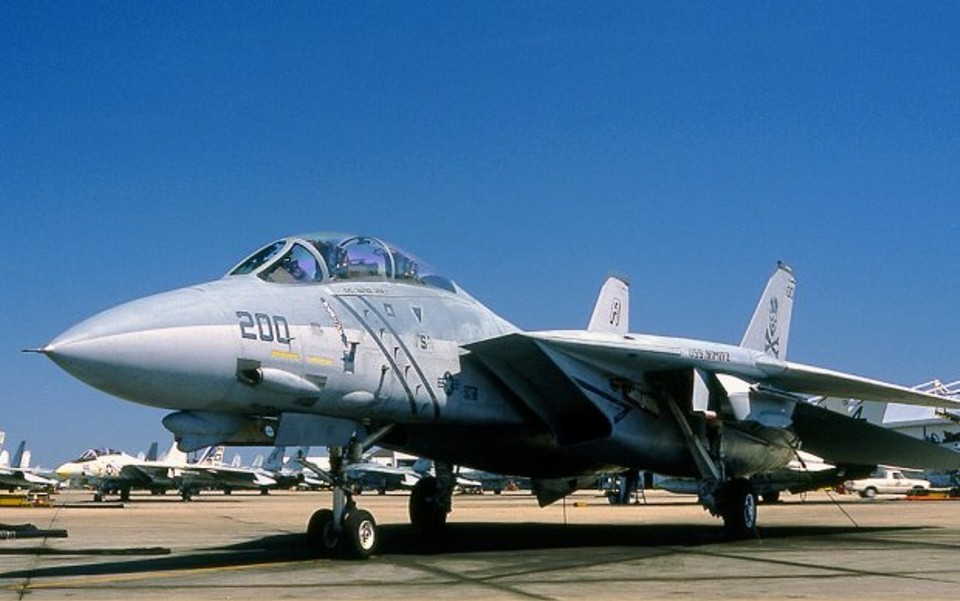 I wanted to find out who the builder was on this RV-8A.  I did my usual Google search and found the answer in my favorite RV web site, Van's Air Force, operated by Doug Reeves out of 52F.  The photos below are posted in the RV-8 section of the Van's Air Force Forums.  The airplane was painted in April 2010 by Grady of Glo Customs, located at the Roanoke, Texas airport (52F).  I flew out to LOE5 in October 2005 taking one of their friends along with me in my RV-9A.  Danny King is flying the airplane here with Doug Reeves doing the photography while Randy Richmond flew the chase plane along side "Smokey". 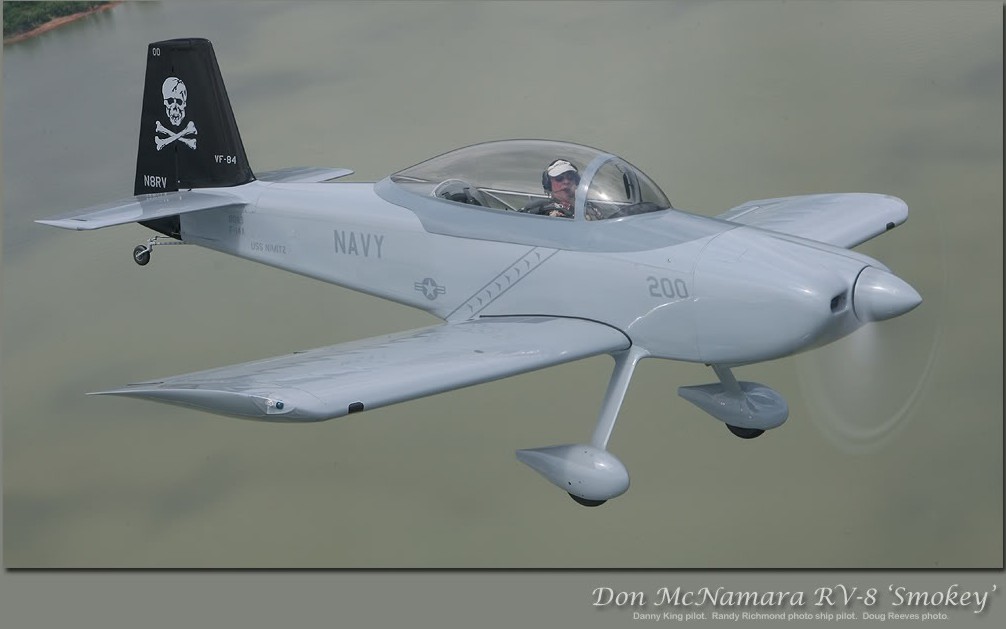 These photos were taken at 52F when N8RV was fresh out of the paint shop. 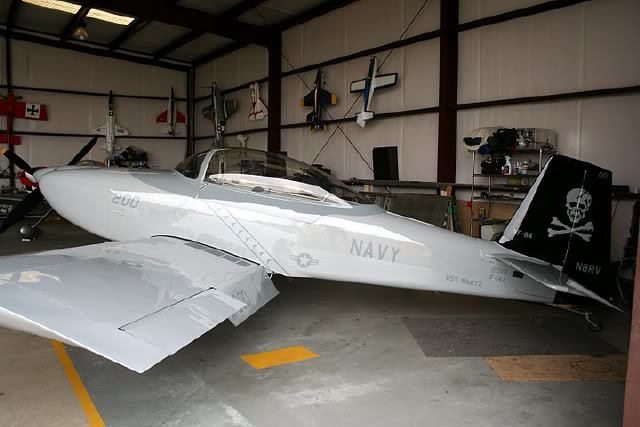 That is Danny King's RV-8 in the hangar along with some smaller wings on the wall.  Danny's RV-8 paint scheme was inspired by the full-sized P-51 known as "Big Beautiful Doll". 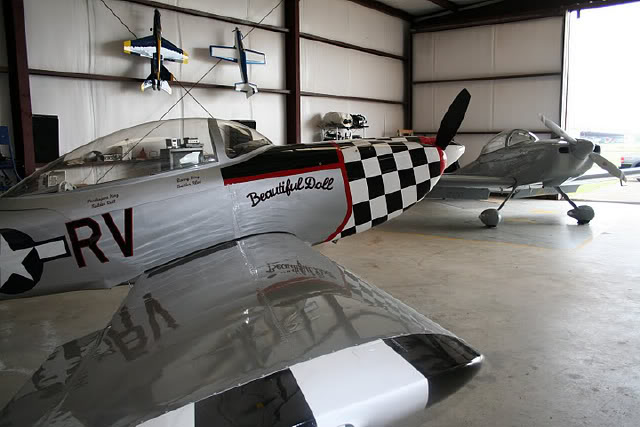 There is a heads up display in this RV-8. 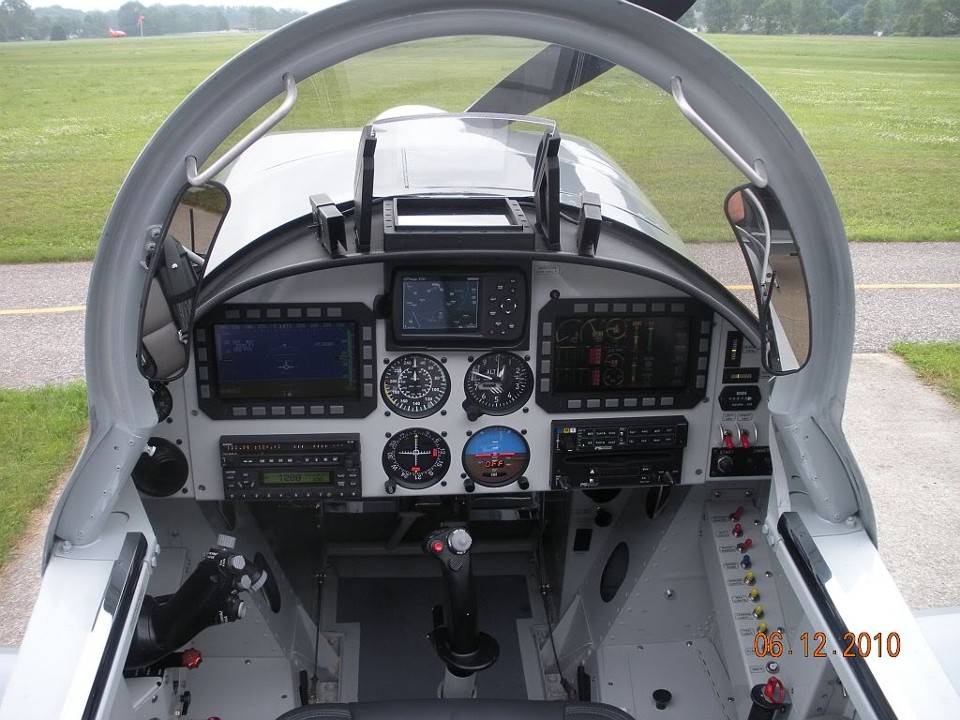 Donald crafted this mock-up panel to add to the fighter style instrument panel when it is on display at a fly-in.  F-16 fighter pilots will recognize the equipment represented by this thing. 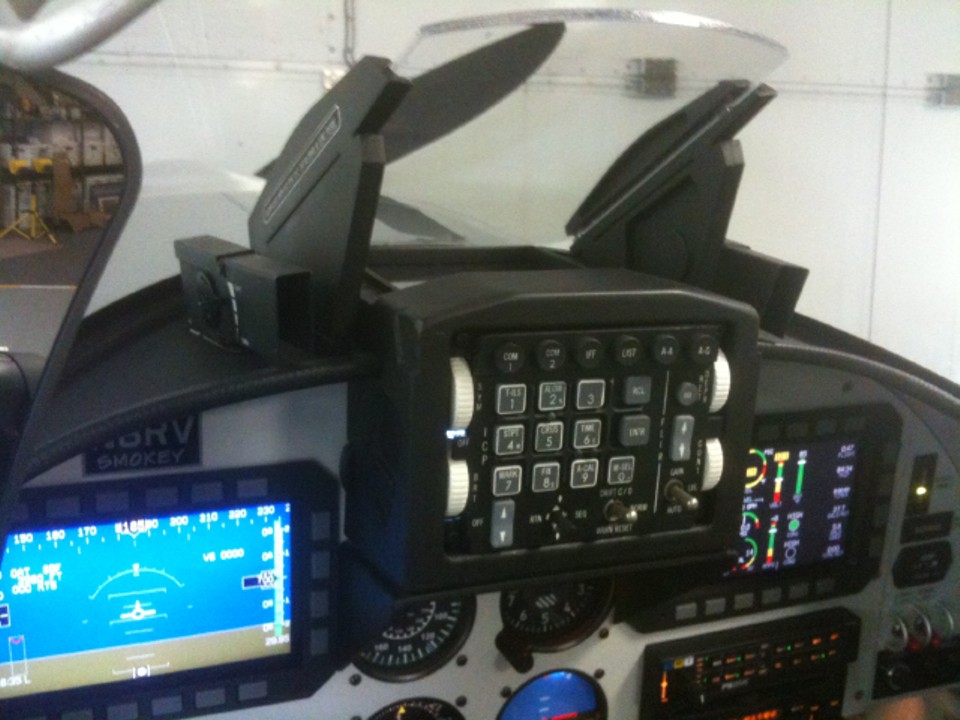 Here is the official photo presumably taken at home in Elkhart, Indiana. 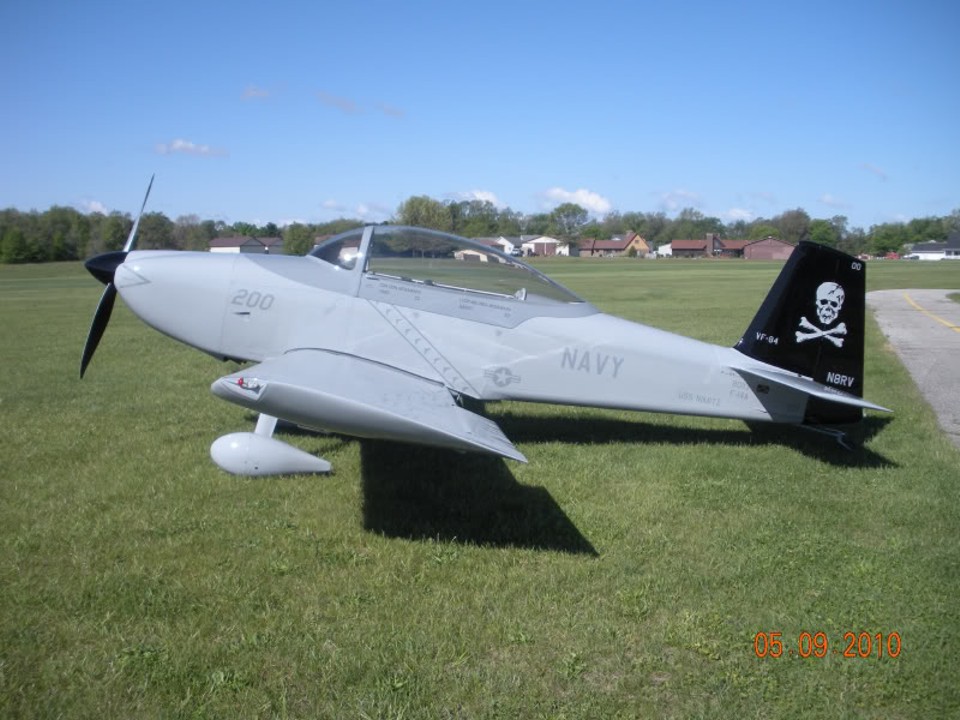 There is no doubt as to who the copilot is on this airplane and in Don's life. 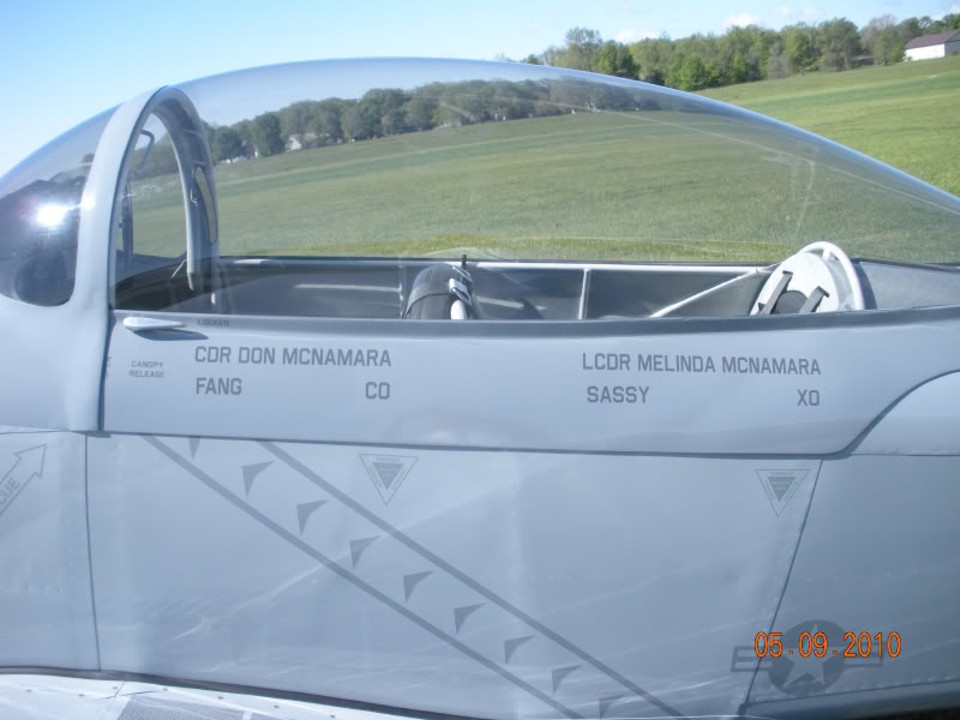