July 25, 2010: When we made our first pass through the museum, we were on the upper floor.  The P-51 on the previous page was on the lower level with the hangar floor with access to the ramp behind the museum and the runway at Pioneer Airport.  When we went into the main exhibit area on the lower floor, we had much more to see.  Here is the interior of the replica Voyager fuselage.   The original Voyager is in the Smithsonian Air & Space museum in downtown Washington, DC.  It is hanging in the main gallery near The Spirit of Saint Louis. 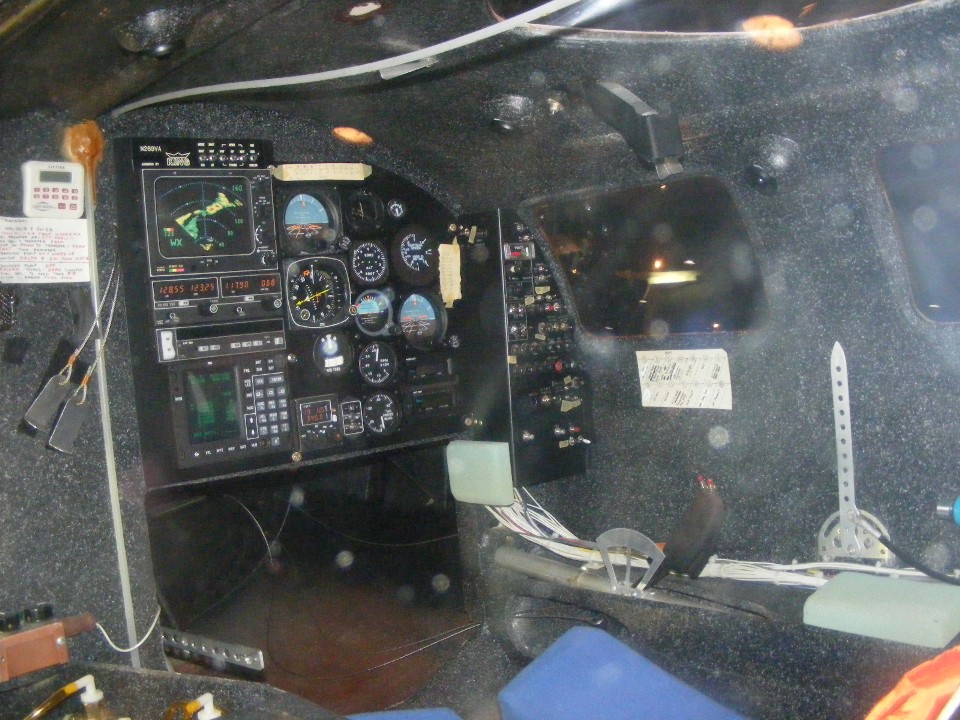 The aft area has this oxygen bottle and space for the off-duty pilot to stretch out.  The flight around the world for Voyager lasted nine days. 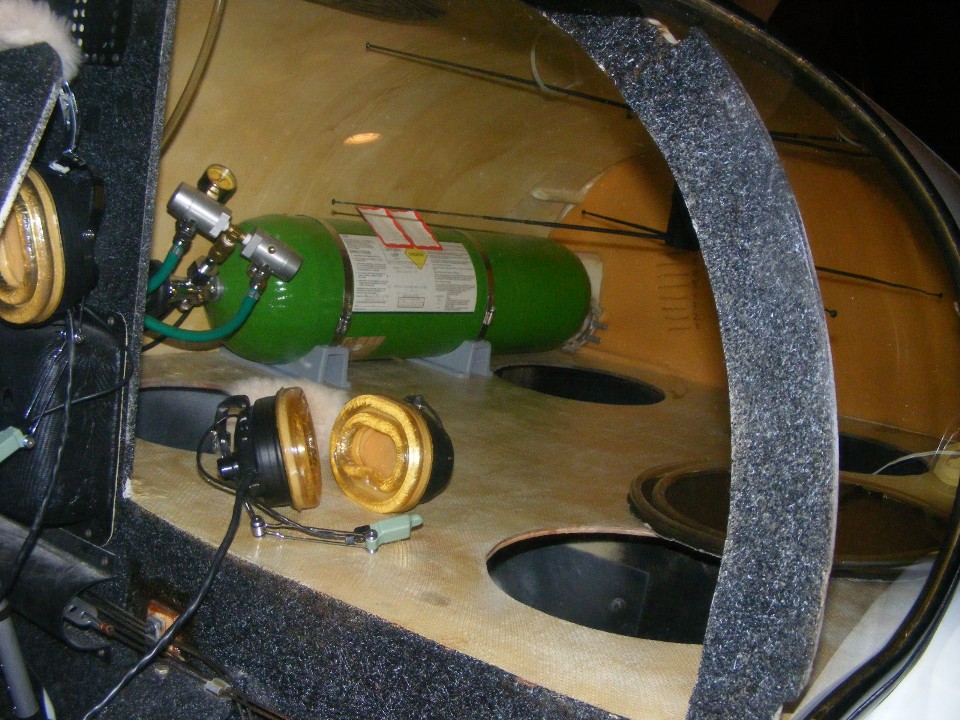 This sign at the exhibit say it all for the nine days of flying around the world. 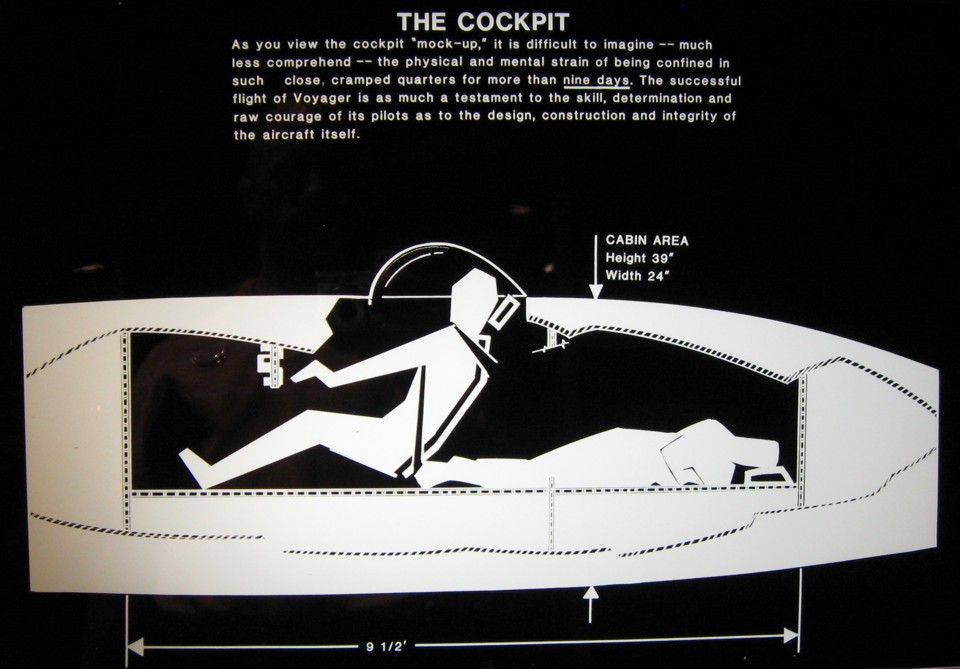 This diagram gives an overview of the all the fuel storage cells in the airplane designed to maintain weight and balance during the world flight. 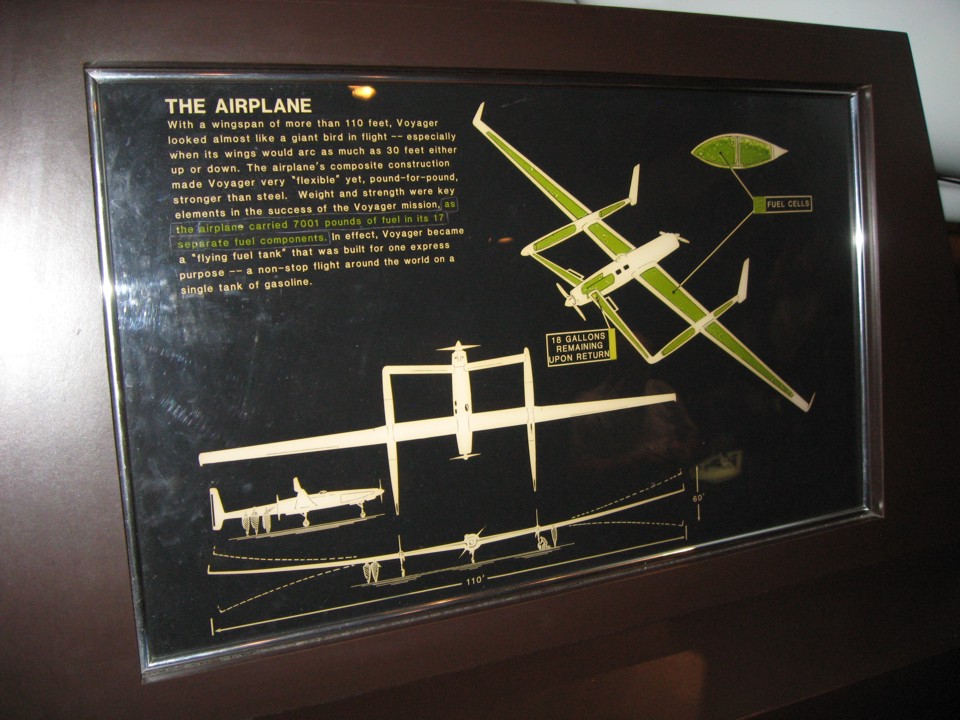 This the text from the diagram above. 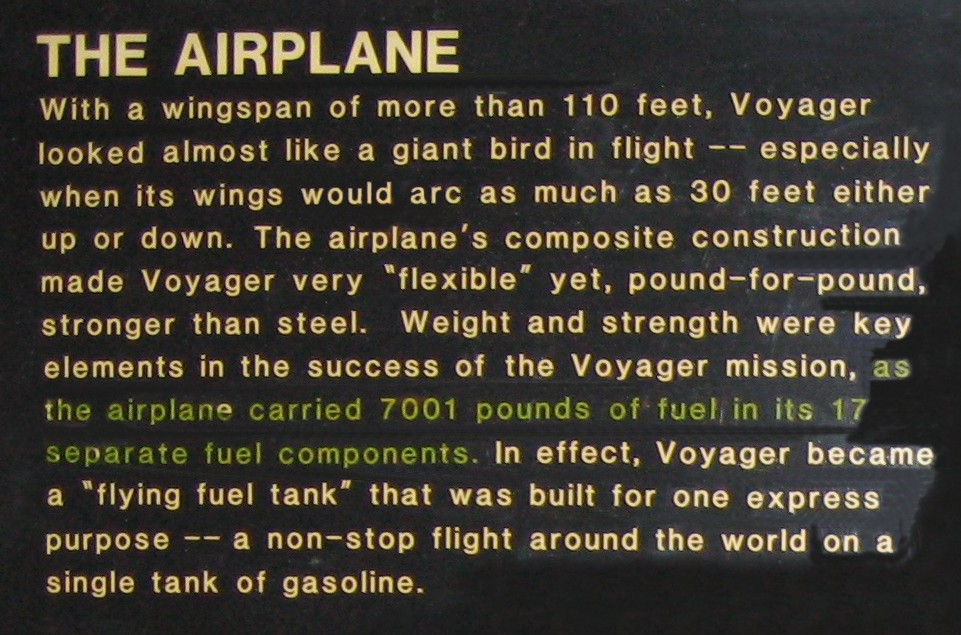 Aerobatic airplanes can be displayed at any angle since they fly upside down just as well as they do upright. 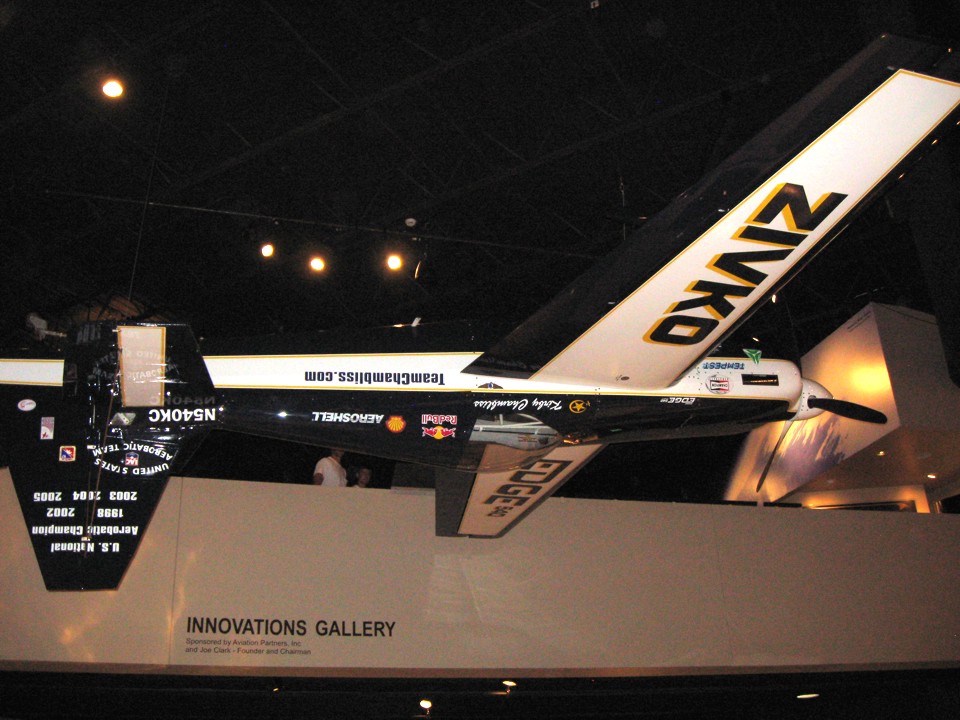 This is the interior photograph on a post near the Bugatti Racer.  I cleared up some photo flash reflection from this photo taken by Edward. 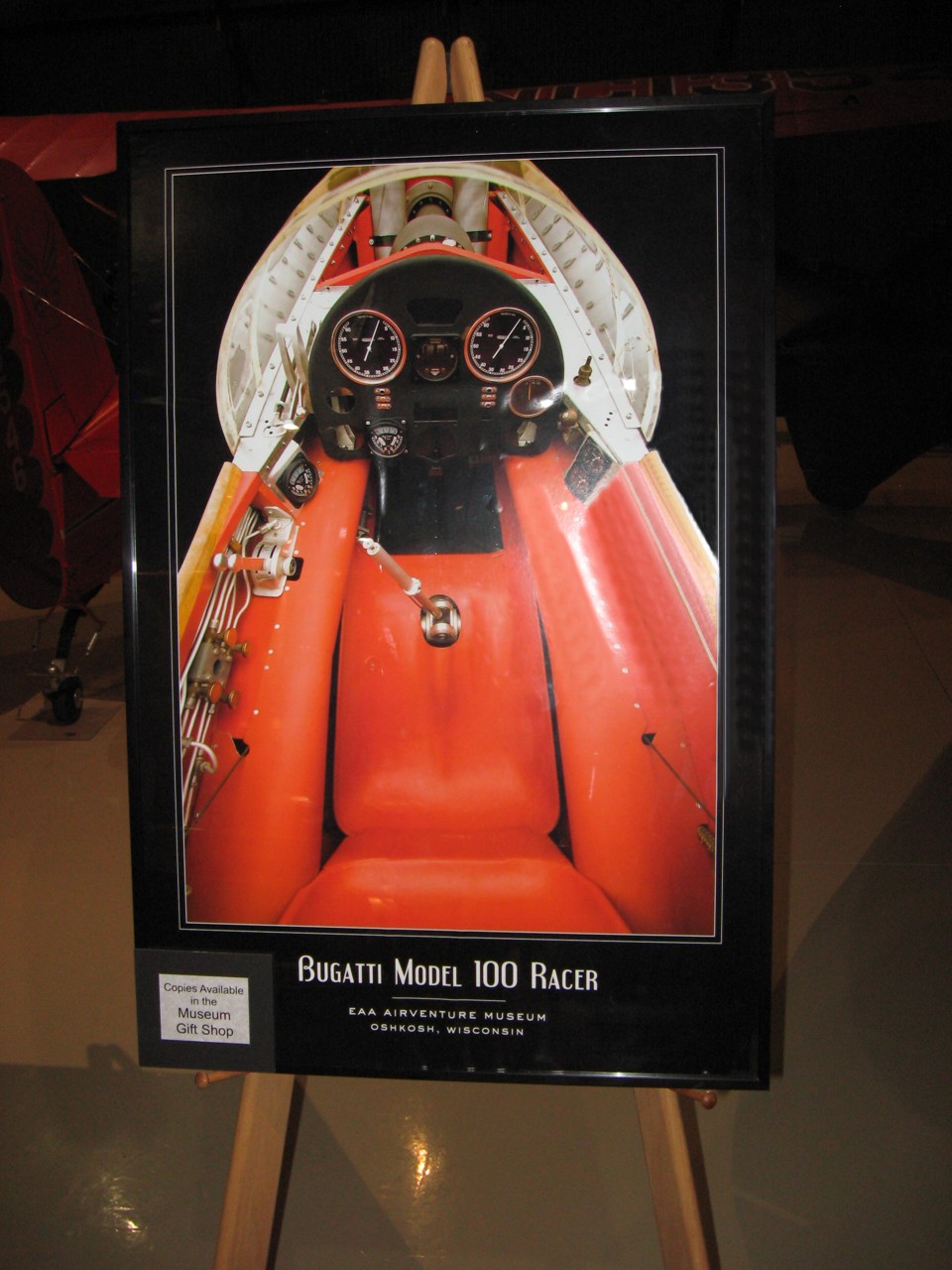 The Bugatti racer was way ahead of its time.  It had two engines located aft of the pilot and drive shafts to the gear reduction box at the propeller on the front. The Bell P-39 Airacobra fighter plane had one engine behind the pilot with a similar drive shaft arrangement and a large cannon shooting through the prop hub.  The P-39 was the first airplane designed around that cannon, not the engine as with most airplanes.  The modern day ground attack anti-tank jet designed around a gun is the A-10 Warthog.  You can learn the secrets of this one-of-a-kind airplane on this web page from the EAA museum.  It has never been flown.  You can learn how this airplane was saved from the Germans when they invaded France in 1940. 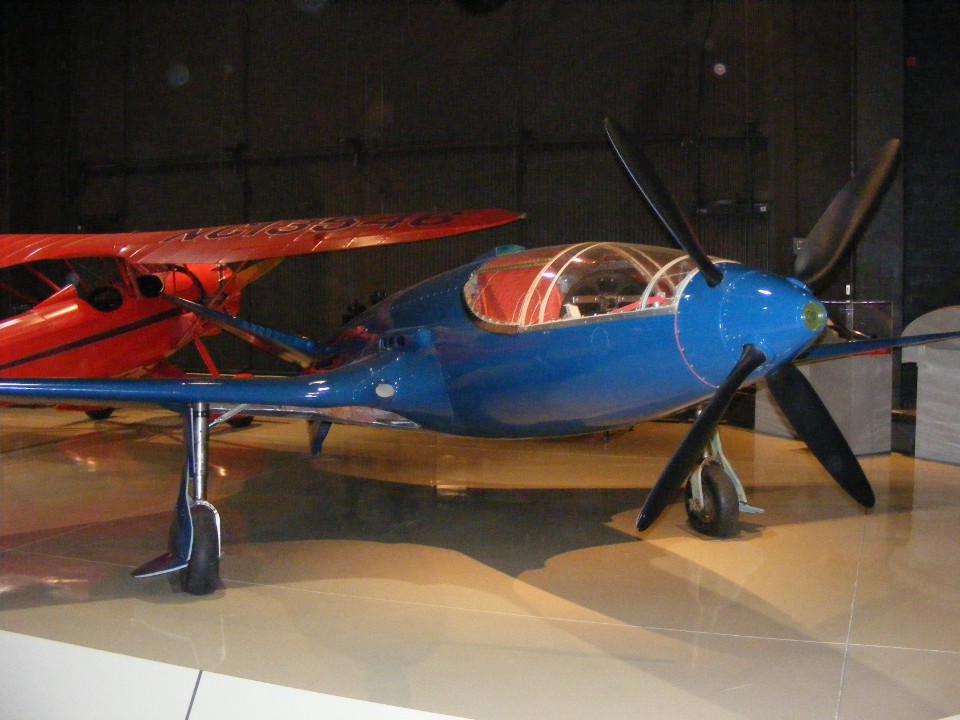 The Bugatti 100 racer was the first V-Tail airplane with a miniature vertical stabilizer that also contains the tail wheel.  There is no rudder.  Do you see the cooling air intakes on the V-tail "horizontal" stabilizers?  This thing was years ahead of the Beechcraft V-Tail Bonanzas that were first made in America after World War II. 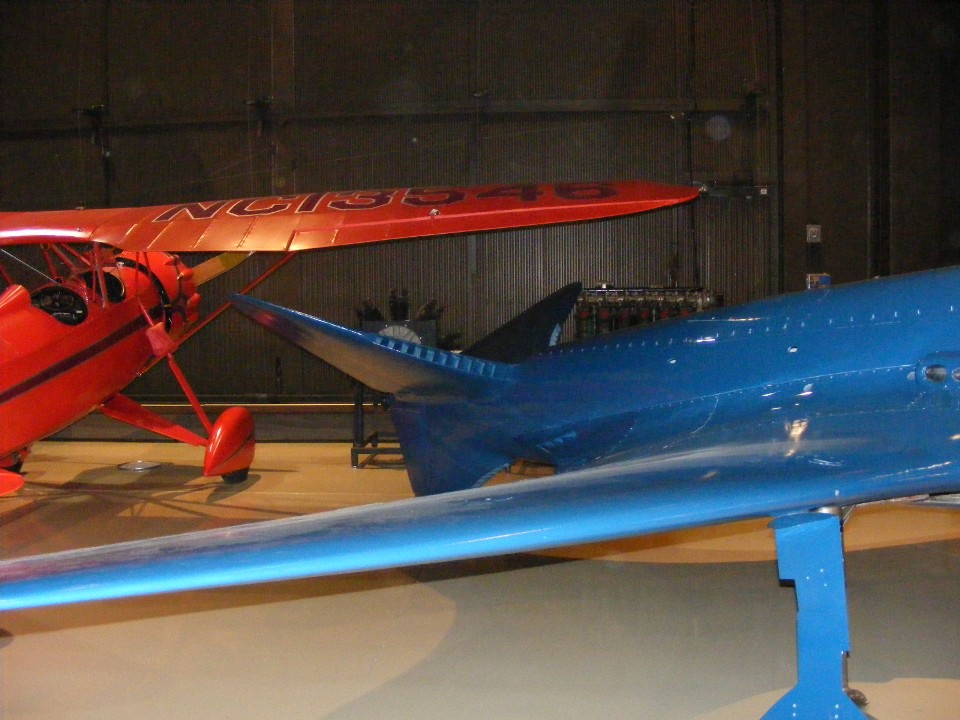 When we first entered the museum, the lady told us the museum would close in 30 minutes.  I mentioned to her that we have tickets for the event that was the reason the museum was closing early today.  This is Dedication Reception for "Little Wings - Big Dreams" with the Academy of Model Aeronautics (AMA) getting an area dedicated to aeromodeling in the EAA Museum.  I was a member of the AMA in the years when I was an active pilot of radio-controlled model airplanes.  If you have been following my web site, you have seen my one-sixth scale 1966 Piper Comanche B model and how I adapted the paint scheme to fit my Van's Aircraft RV-9A. 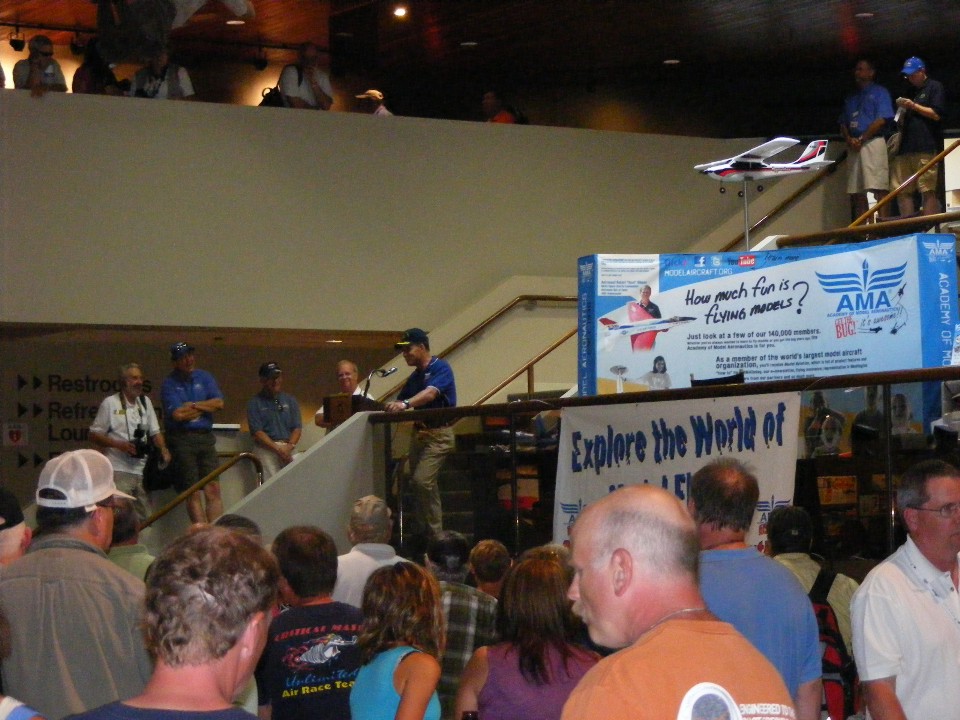 I love the fact that my first "little wings" as a pilot are represented here where a replica of the Wright brothers first powered airplane is displayed. 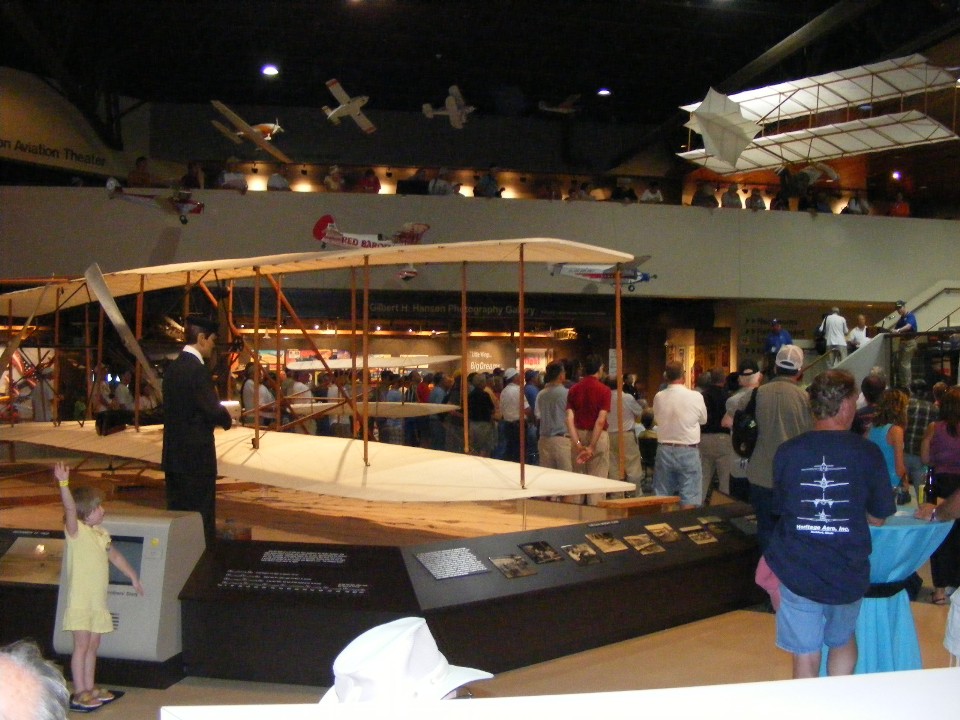 Sandwiches, fruit, and cheese were served after the dedication speeches ended.   I found myself talking with others in the crowd who started out as I did flying model airplanes before finally getting their private pilot license.  I had the photo in my wallet of my RC scale model of the Comanche and the RV-9A "business" cards showing the Comanche paint scheme adapted to my RV-9A "Enterprise."

We left the museum after getting something to eat in the buffet line and finishing our tour of the "Little Wings - Big Dreams" exhibit area.  There were some memories in there going all the way back to my first Cox .049 glow-engine powered plastic model that flew on strings, around and around in a circle.  I was 12-years old when I got that airplane.  With it getting late in the day, we got on the bus to take us back to the airport well before sunset would call a halt to the days activity on Sunday, July 25th.

The end of the day came after we had set up the tent by the airplane.   Edward used his phone to take this picture of the evening twilight looking northwest.  The mosquitoes were telling us to take cover inside the tent. 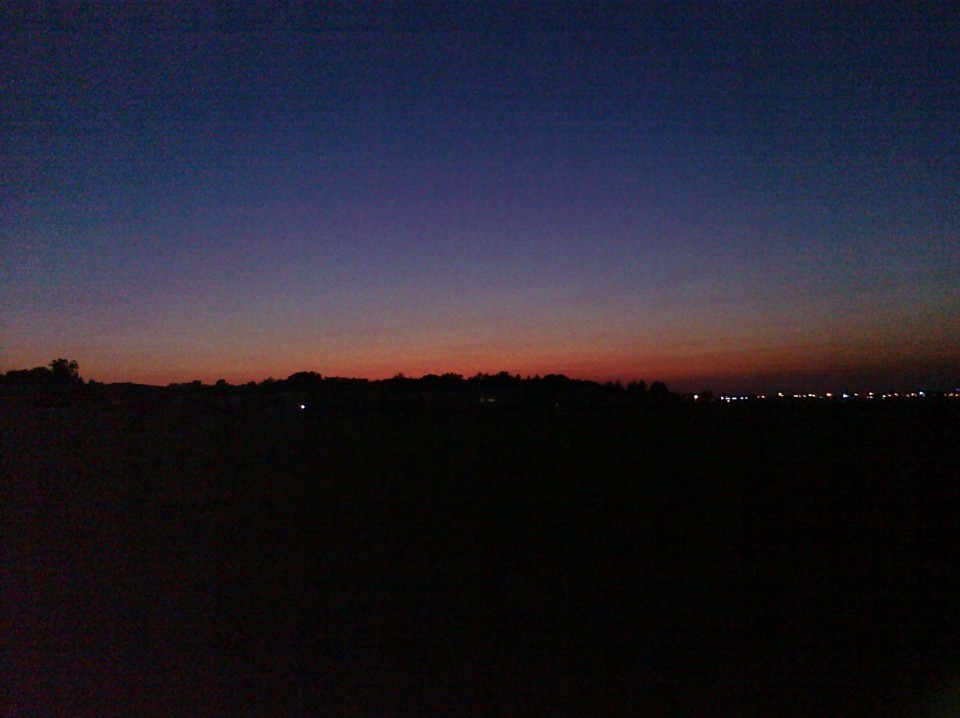 As always, there is something still in the airplane that should be inside the tent.  Ed snapped this photo with his phone which needed some post processing to get it to this point. 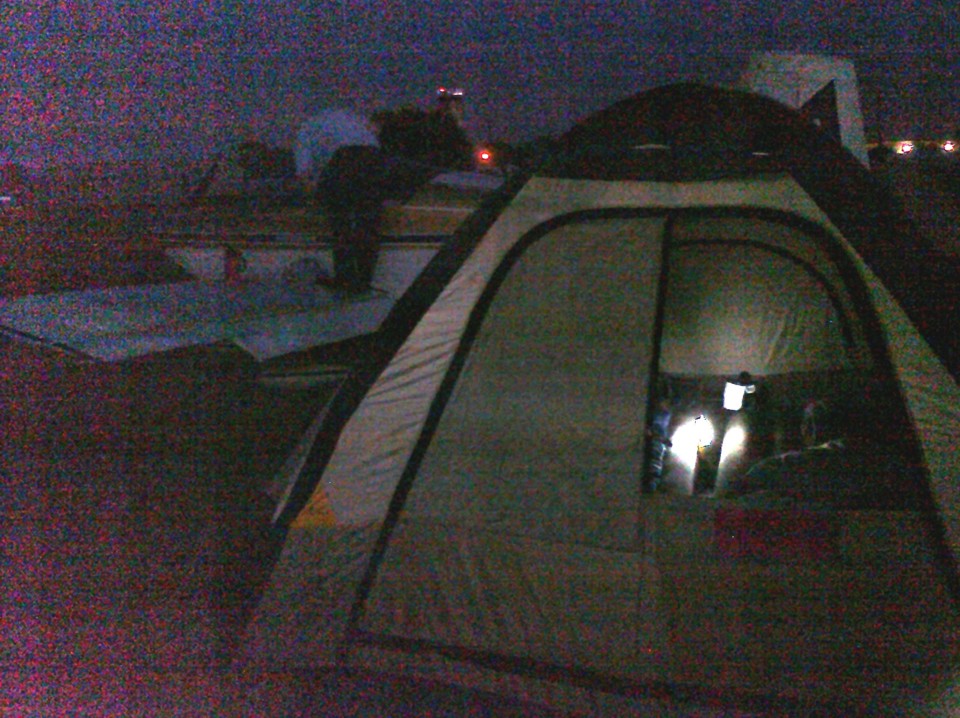