July 25, 2010: The scattered and broken cloud layers were easy to climb past into the clear, cool and smooth air above and smooth sailing toward Oshkosh.  We did not have to climb very high to get here.    The AirVenture NOTAM is ready to consult when we need it during the arrival. 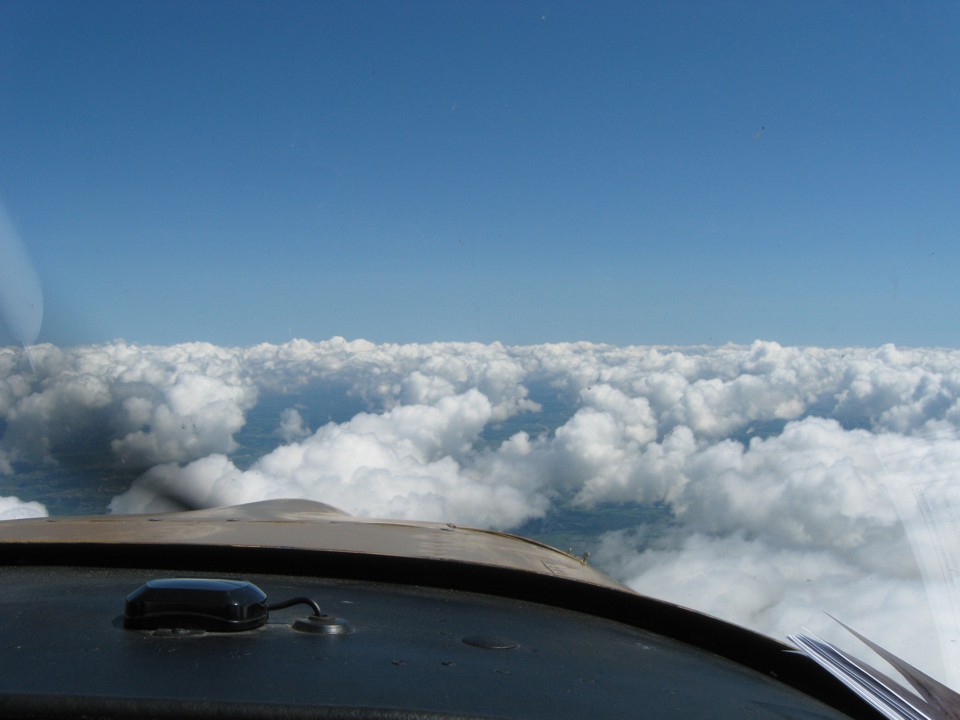 Edward took this shot of the GPS and part of the panel to show our progress.   I zoomed in on the raw photo below to see the Dynon D-10A is reporting 161 MPH true airspeed and quartering headwind of 7 MPH slowing us to 158 MPH over the ground on our heading to a waypoint near Ripon, Wisconsin for the VFR arrival.  The GPS is set to Eastern Time, with 36 minutes expected to cover the 96 miles to RIPON intersection.   The compass reading matches the magnetic course derived by the GPS and displayed at the top of the compass arc on the GPS screen.  I don't usually fly at 7,500 MSL as it burns more fuel.  I stayed at this altitude since the flight time is relatively short and we have to be down at 1,800 MSL when we arrive at RIPON intersection. 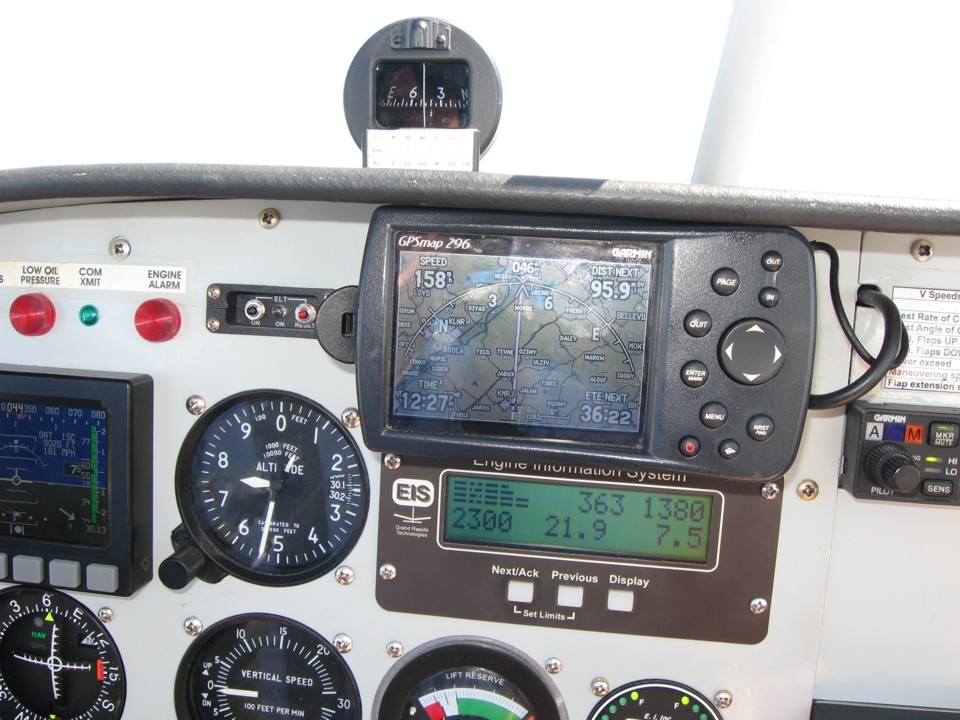 I took these next two photos at 12:28 PM Eastern Time.  The first one is looking north from our flight path. 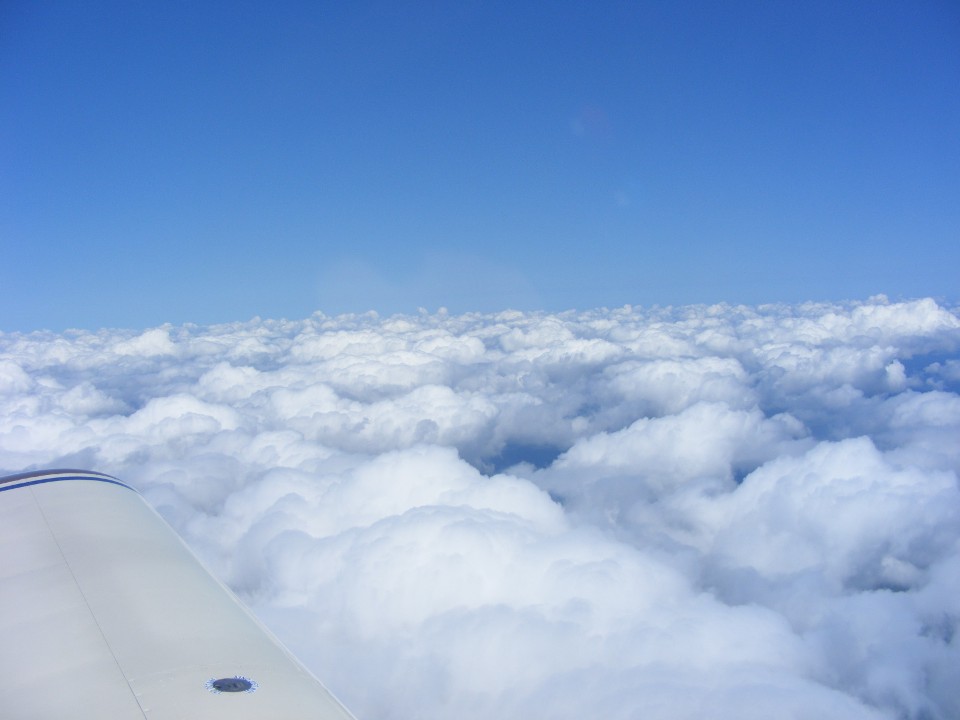 The second photo is looking ahead toward Ripon.  I can see the clouds below are changing from "broken" to "scattered" as we get closer to Lake Michigan and the eastern section of Wisconsin. 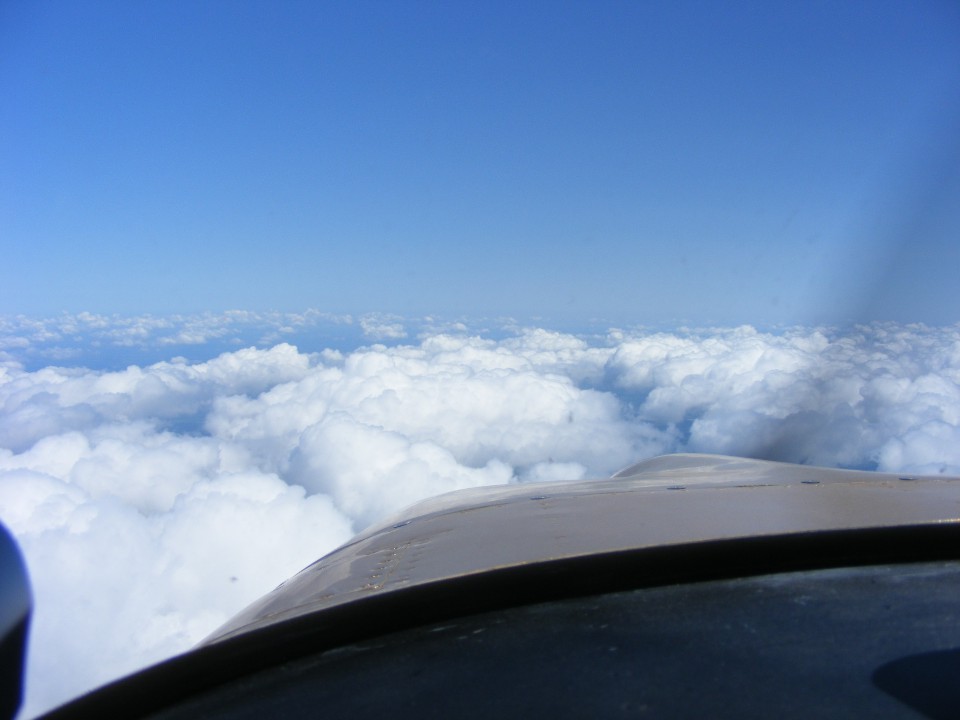 Finally the air clears of most clouds as we approach RIPON intersection near the town of Ripon, Wisconsin.  That is Green Lake out there to the left of the airplane.  The town of Ripon is five miles east of the end of the lake.  The conditions are perfect for the VFR arrival to Oshkosh.  We have been listening to the arrival ATIS and to the FISKE air traffic controllers.  This is my third arrival to OSH including 2005, 2006, and now for 2010.  I had told Edward what to expect.   Now he is hearing it on the radio and will see it for himself as VFR air traffic converges ahead at Ripon. 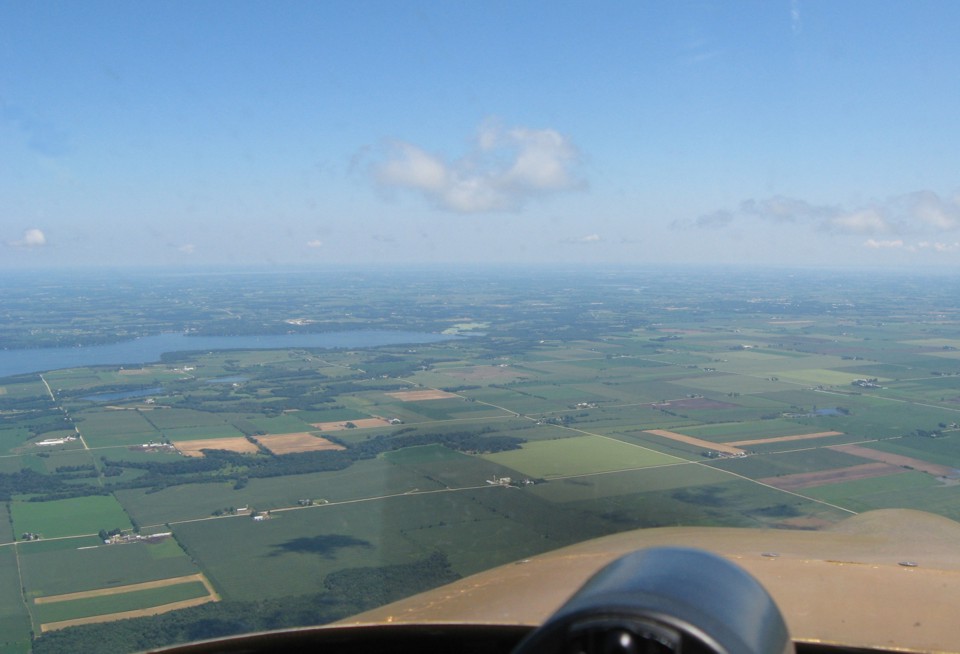 VFR traffic converged on RIPON intersection per the NOTAM arrival instructions.   We counted about SEVEN airplanes coming together and we were one of those seven.   Our entry course toward RIPON was in line with the railroad tracks that would guide us to FISKE intersection 10 miles up the tracks toward Oshkosh.  We maneuvered behind a group of several airplanes coming in on our right and ended up with a high-wing Cessna in front of us as we established 90 knots and 1/2-mile in trail at 1,800 MSL altitude for the 10-mile ride to FISKE.

The Cessna in front of us started off doing a good job, then started descending down toward 1,500 MSL.  When I realized he was slowing and descending, he would disappear below my nose if I did not slow down and go down with him.  In this environment, it is not good to lose sight of the airplane ahead of you.  He cannot see me, so I MUST see him.  Things got exciting when one airplane crossed directly through the "conga line" of airplanes.  He was apparently heading to the Fond du Lac Airport east of our arrival path.  Then there was the airplane that came in low from the west, passing under the line of traffic and then climbed up to 1,800 MSL and cut in line.  The airplane behind him turned out to the right and went somewhere we did not see.  I have all this on video with the sound running on all our comments as we identified each airplane that we had to "see and avoid" on Edward's first VFR arrival to Oshkosh.  Not all the airplanes show up on the video, but our comments about each crazy stunt are recorded on the sound track.

By the time we get to FISKE, the Cessna ahead of me has dropped out of sight below me and slowed down.  I stayed up at 1,800 MSL and put out full flaps to give the controller time to dispatch that guy straight up the railroad tracks for runway 9/27.   He immediately called up to me "RV directly over FISKE, rock your wings" and I did.  He thanked me for doing a good job and awarded me runway 36 for my third arrival at OSH, all via runway 36.  I revved up my engine to get back to 90 knots and pulled in some flaps to keep the engine from overheating.  That idiot in the low-flying Cessna had the gall to transmit to the controller and ask if he could also get runway 36.  The controller said NO and I presume that was to punish the pilot for low and slow flight and talking on the radio.  During this NOTAM arrival, you do not speak on the radio unless there is a problem with your airplane or you are asked a question by the controller at FISKE.

The photo below was taken by Edward when we were well established along Fisk Boulevard toward the approach end of runway 36.  US 41 is on this side of the airport, which is at the center of this photo.  That is Lake Winnebago ahead, not Lake Michigan.  This is Winnebago County, and it is where they build those motor homes and campers.  You can also see that I am again adjusting the camera to get a better view of the airport for the video of the 2010 arrival.  The video has been running since before Ripon and will be turned off only when we are parked in homebuilt camping. 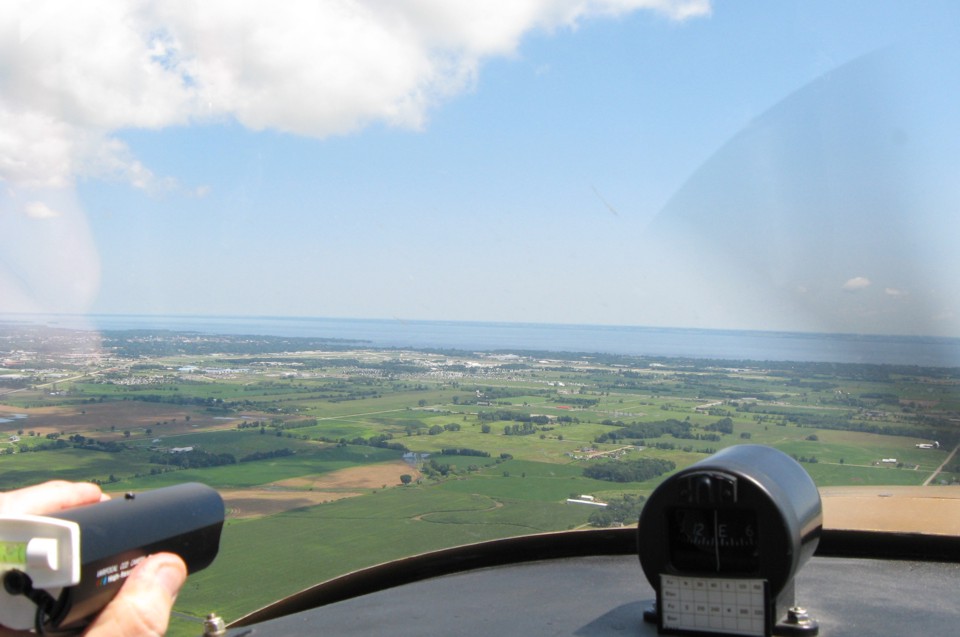 As we get closer, you can now see the long runway 18/36 running parallel to the lakeshore.  Runway 4 is closed and being used for airplane parking, and runway 9/27 is open for arrivals.  During AirVenture, runway 18/36 becomes 18R and 36L, while the taxiway east of the normal runway turns into runway 18L and 36R.  There were two RV's ahead of us and both of them were assigned to runway 36 RIGHT.  One was told to land on the dot mid-field, the other to land on the numbers, about 1/2 mile apart at the same time.  The tower had not spoken to me as I was coming abeam the end of the big runway.  I called him and rocked my wings and he gave me "RV tri-gear, land mid-field on runway 36 LEFT" and that made it "3-for-3" with all my landings on runway 36 LEFT at Oshkosh 2005, 2006, and 2010. 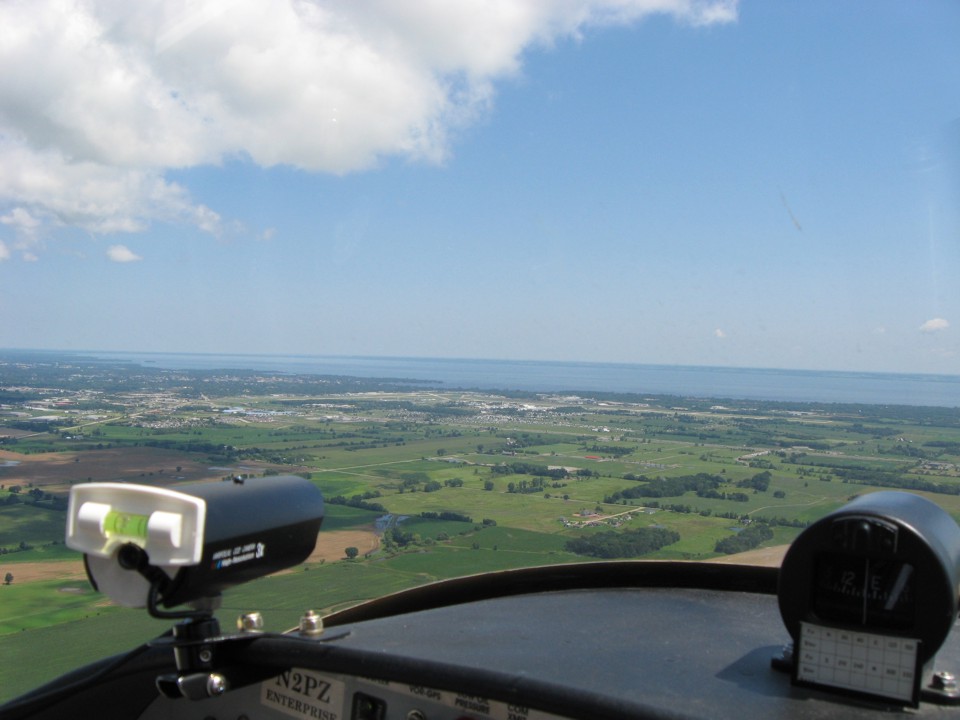 I crossed the numbers at about 40 feet and descended to about 20 feet for the first half of the runway landing on the GREEN dot painted on the runway and was told to go to the end of the runway before getting off.  Another plane landed on the numbers half a mile behind me and was instructed to take the first PAVED taxiway near the middle of the runway.  I got off at a taxiway in 2006 that took me across a temporary grass taxiway.  You can see it in my old videos.

There were a line of RED CONES at the north end threshold of runway 36 LEFT and a flagman over on the right side where the intersecting taxiway brings traffic from the other runways to this point on the field.  A few cones were missing to act as a point to leave the runway and approach the flag man.  I raised my HBC sign for him to see that I wanted to go to HOME BUILT CAMPING.  He motioned me in the correct direction.   The end of the runway between those red cones and edge of the concrete was a taxiway to the real taxiway that goes into the Warbird area and to Home Built Camping, my destination.  As I approached these permanent intersections, the next flag man pointed me toward a young lady who motioned me into the area where this photo is shot.   Edward immediately took this photo looking north on this taxiway to the southwest end of runway 4.  The P-51 Mustang, three T-28's, and a Corsair are parked here, and more military types are parked ahead. 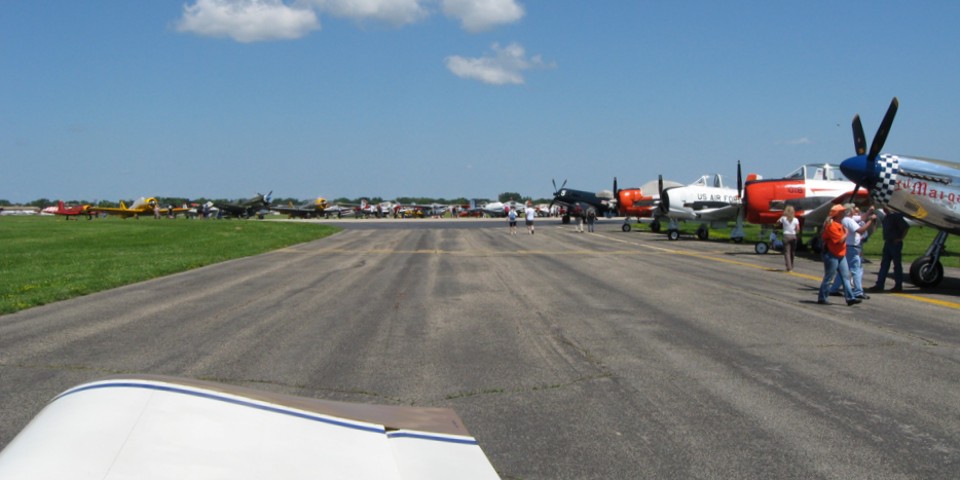 Eddie started to pan his camera toward Warbird Headquarters and took this second shot.  Since we were stopped, I opened the canopy as the young lady came over to me and asked if I could turn onto this taxiway off to my right to make way for a P-51 Mustang coming down the taxiway that I would use to get to HBC.  I had taken my headphones off to have the conversation with her as she stepped behind my wing to speak with me.  I had left them off my head and of course my hat blew off when I gunned the engine and made a right turn to get out of the way of the oncoming P-51.  I made a 270-degree turn to the right to get my left wing out of the taxiway and the path of the P-51.  Those guys don't have good forward visibility and I did not want any part of my airplane chopped up by that big four-blade prop on the P-51.  As I stopped on the taxiway with my nose now pointing south, a nearby pilot brought my hat to me and I thanked him and put my headphones over it to keep it in place.

The temperature here was about 80 degrees, but it was still nice to have the canopy ajar a few inches for the rest of the ride westward to home built camping after the P-51 turned on to the southbound taxiway toward runway 36 LEFT.  The time on these two photos is 1:19 PM Eastern Time. 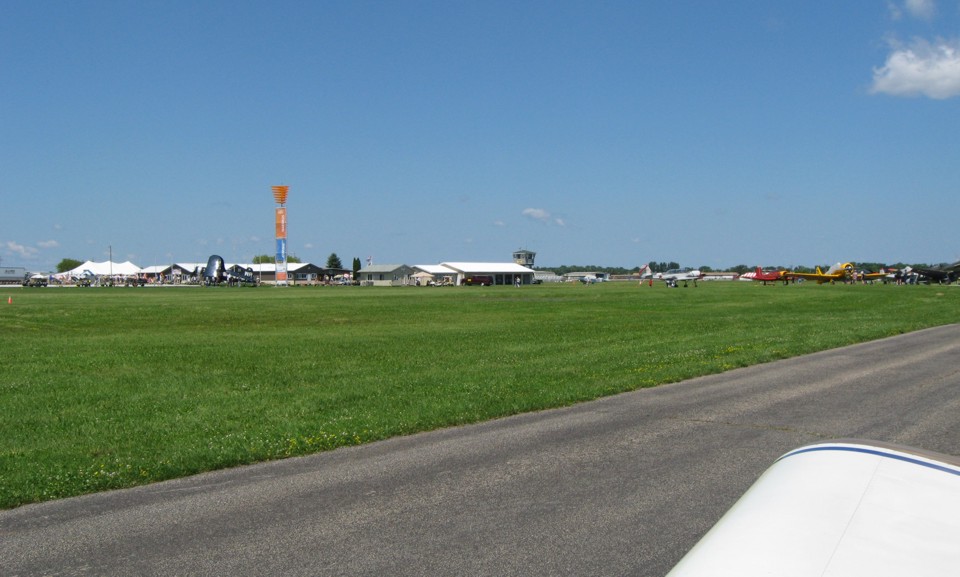 We followed a motorcycle to our parking spot in home built camping.  There were some areas not quite dry enough for campers.  We got a high spot about two rows in front of where I parked in 2006, and about eight airplanes from the end near the showers and porta-potty row.  By the time we got out of the airplane and snapped these pix, it was 1:40 PM Eastern Time.  The video camera was recording right up until the motorcycle rider was standing where he wanted us to park and gave us the stop signal when we were aligned with the red and white Canadian RV-7 you see here.  You can download the VIDEO FROM HERE.  RIGHT CLICK on that link and save the 639.4 megabyte file to your hard drive for viewing.  You will hear me say FISK when I meant to say RIPON, and some colorful language when we see some foolish and potentially dangerous flying along the trip from Ripon to Fisk before the aircraft are assigned to a runway by the controller on the ground at FISKE intersection.   All the radio and intercom conversations are recorded on this video. 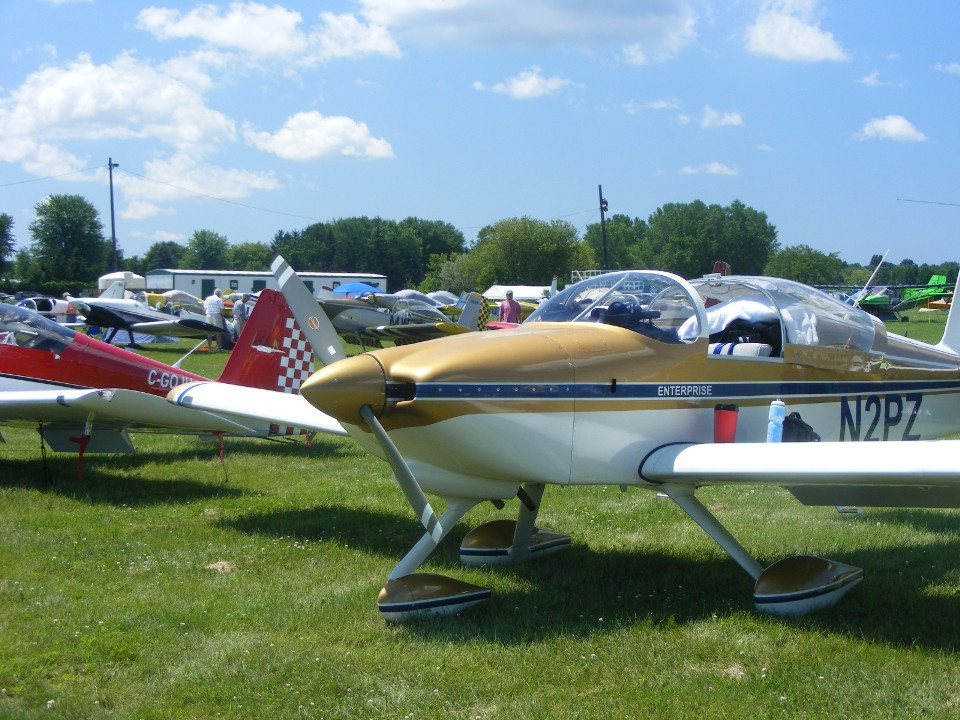 Edward has his video camera out to get some panning footage of the camping area.  Notice how few airplanes are here, and how they are parked in the higher, less flood-prone areas.  There is a Bell 47 helicopter giving rides in the back ground.   They fly only in this back area away from the active runways.  Some of the volunteer staff drive those John Deere four-wheeled utility vehicles, while the guys on motorcycles do things like lead airplanes to the parking areas.  I had a John Deere like this one leading me in to HBC in 2006 with two guys aboard. 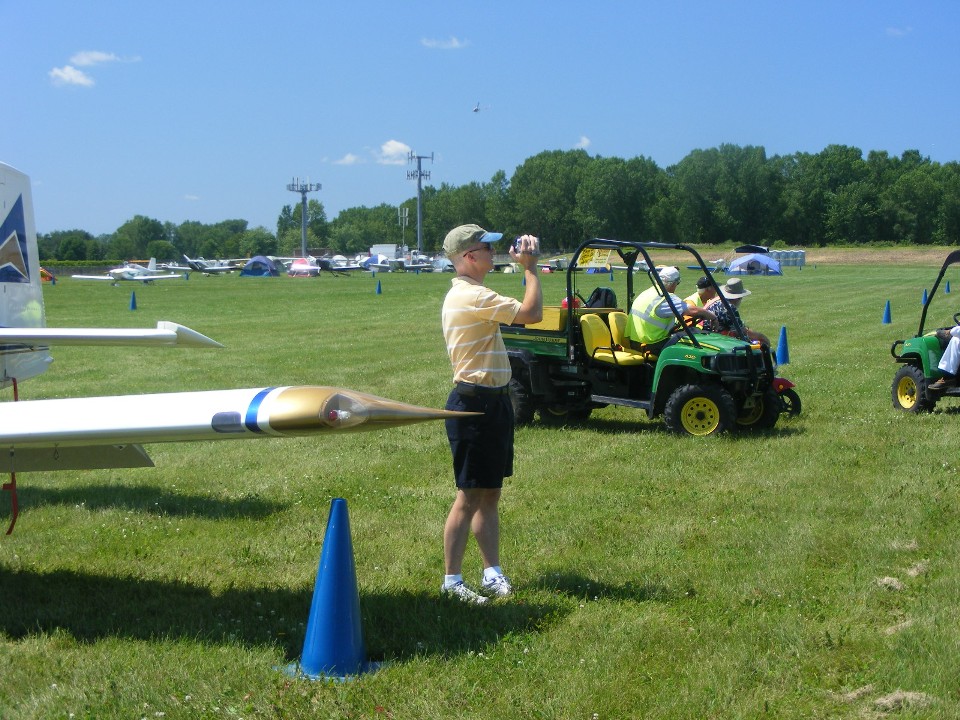 We take a break as it is now time to tie down the airplane in our camping spot.   The rudder gust lock is already in place, and "The Claw" tie downs are in that black bag on the wing. 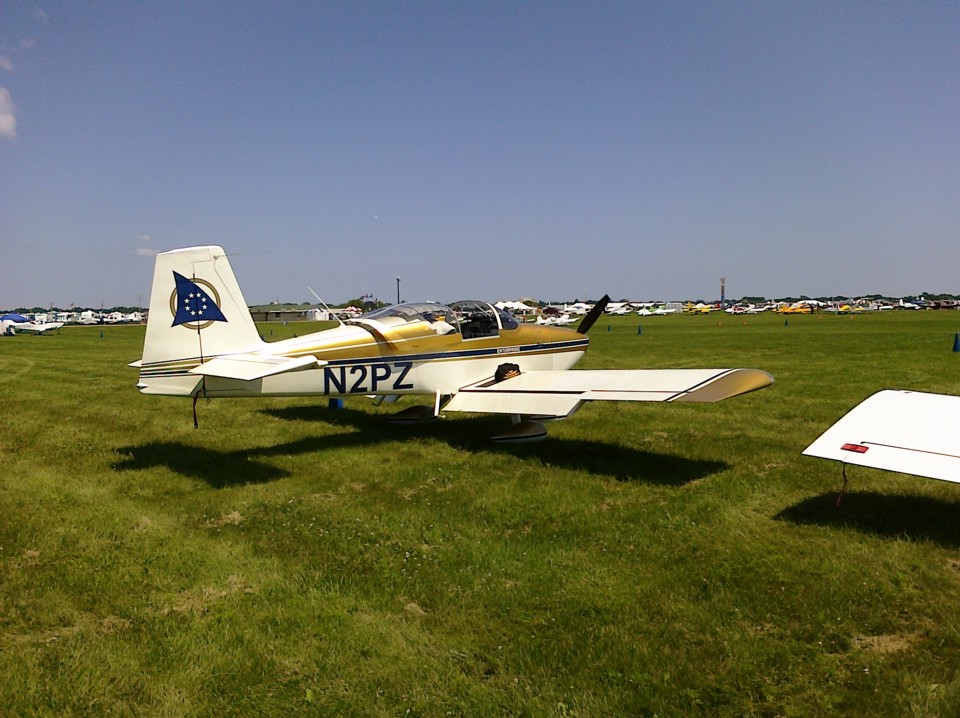 Here is the GPS ground track from Dubuque over to "The Field of Dreams" to Oshkosh.