July 25, 2010: The ramp here at Dubuque has more than just AT-6 trainers on the field.  This P-51 Mustang was warming up his engine before heading for Oshkosh.  We figured that was where he was going, but did not confirm it until we went to KOSH and took more photos of him.  We had both left our digital cameras in the airplane, so Edward snapped these two photos with his cell phone / PDA. 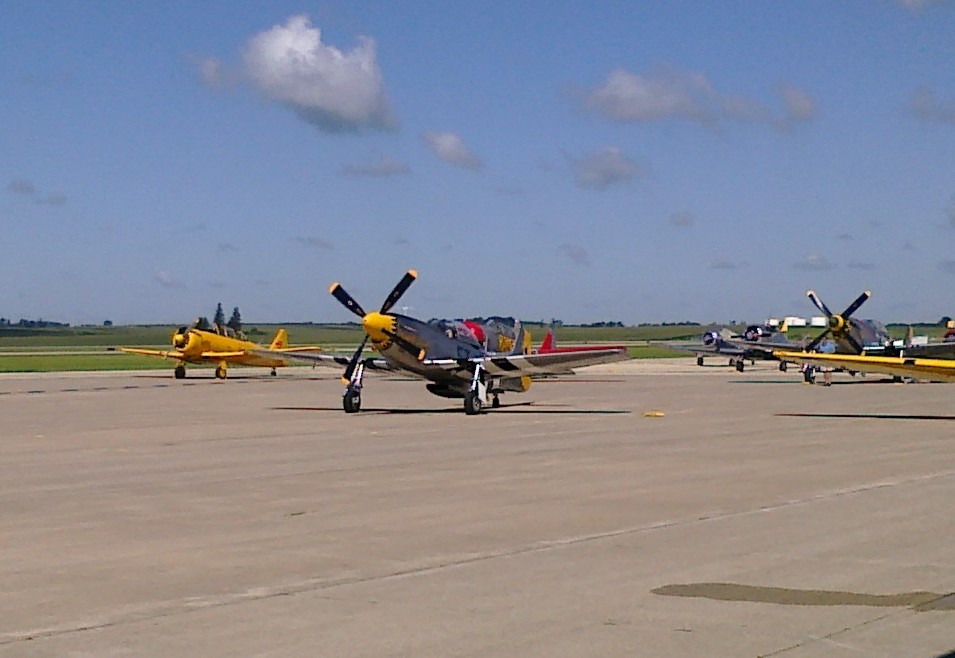 The engine is running and the way the PDA camera processes the image, the propeller blade is slightly "bent" during the processing of the pixels of the photograph.  The Dubuque VOR on the airport is also visible in the background of this photo. 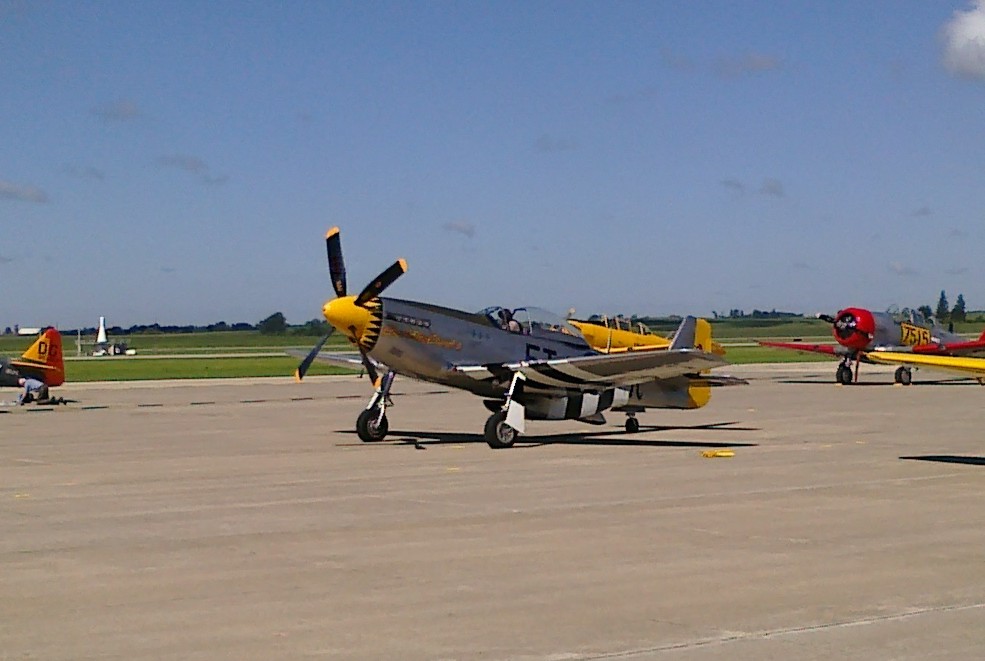 We finished our online checks of the AirVenture web site and got a ride back to the airplane from the FBO office.  The staff were friendly here as they are busy this week.  The welcome wagon is a long series of cars much like riding the parking lot tram at Disney World or AirVenture.  They needed it for those formation practice flights with the AT-6 pilots.  Edward and I were the two of the three riders on this "train" that would hold at least 40 people.  The FBO hangar was setup with many tables to provide services for the pilots who came here with their AT-6 aircraft to practice formation flying before their mass arrival at AirVenture.

Edward took this shot as we departed the self-service fuel area and passed by the FBO.  The next taxiway to the right will take us down to runway 36 for departure. 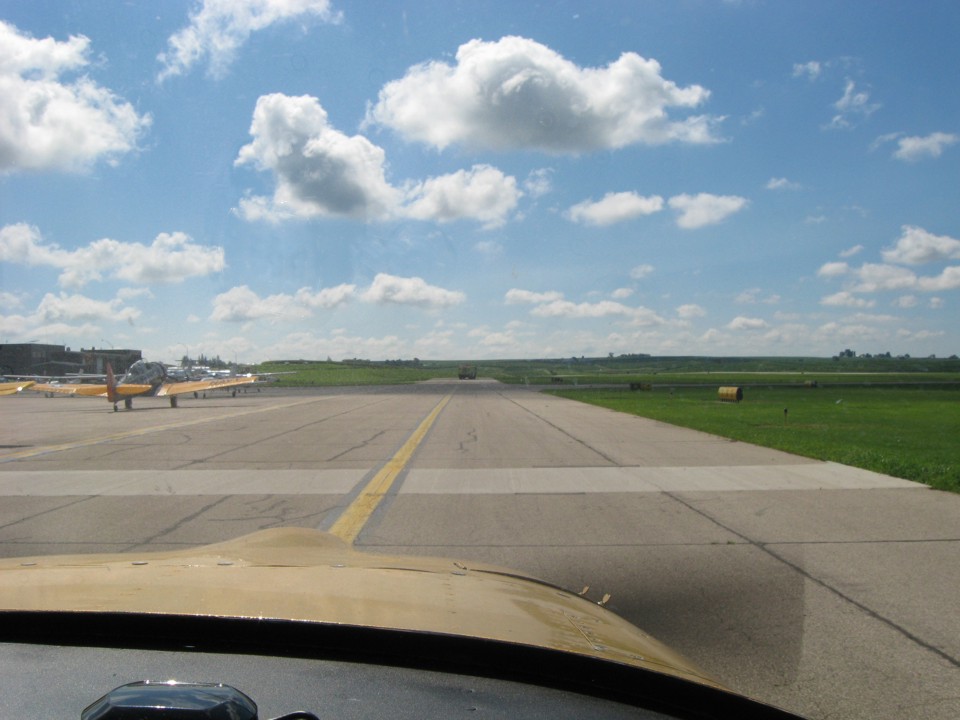 Here is a quick shot of the FBO office and hangar I mentioned earlier. 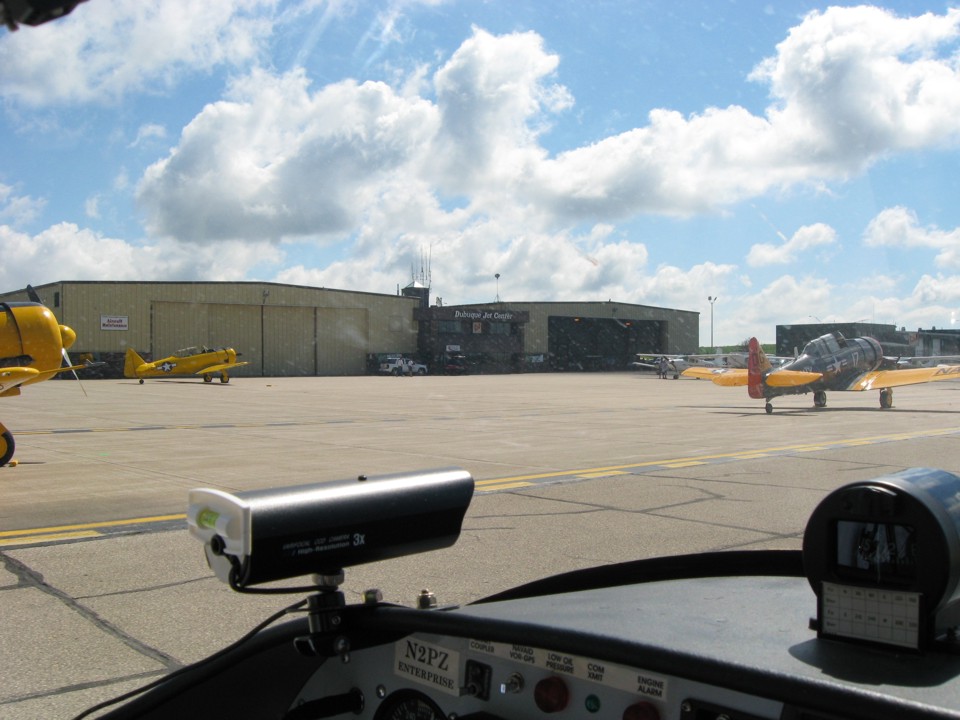 Dyersville, Iowa and "The Field of Dreams" movie location are west of Dubuque.  I came here on a road trip with my son Jason during one week of the 1996 Olympics held in Atlanta.  That lush green grass down there feels good on bare feet.   I made a clock-wise pass around the field to give Edward good photo opportunities.   A bit of my wing tip and stripe around the wing skins are at the bottom of this photo. 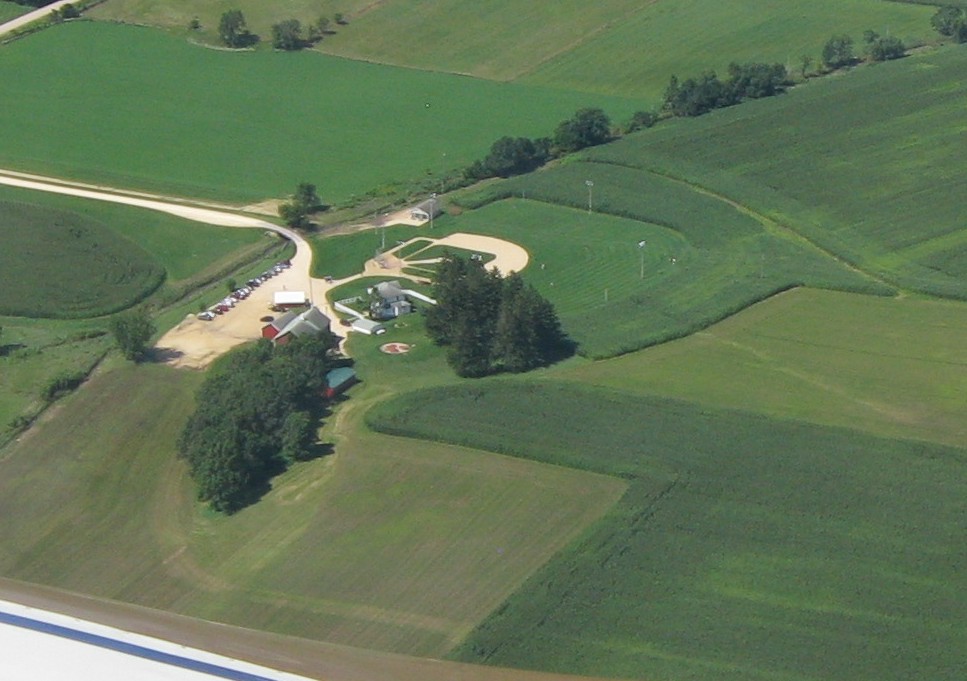 These photos are cropped from the original high-resolution images from Edward's camera. 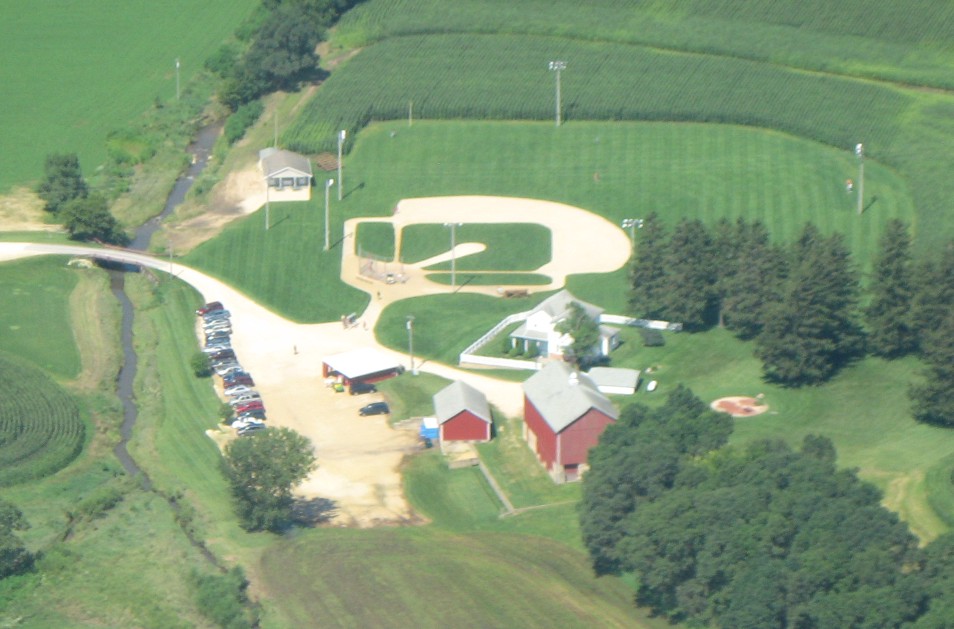 This image was cropped from the full-frame photo.  Remember we are low and slow with rising thermals making the camera more difficult to keep on target.  The cars and light poles show the result of a shaky camera. 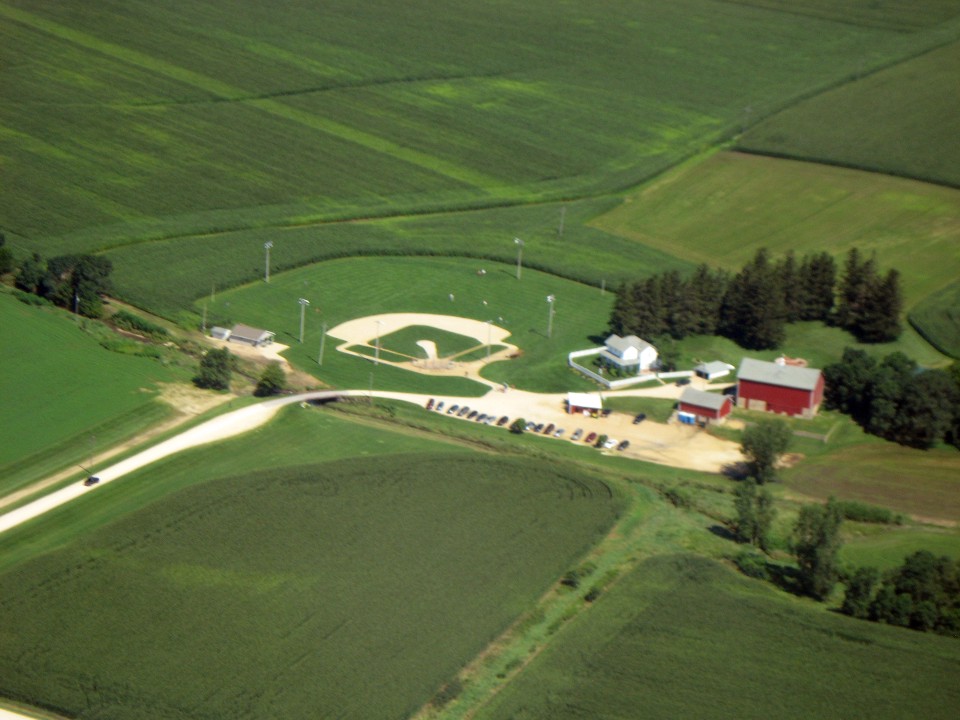 Here is the GPS ground track with one clockwise turn for Edward's photos, then a tear-drop reversal and one "anti-clockwise" turn for the video camera recording.  Our British friends will notice their way of turning LEFT at a "round about" (traffic circle to us Yanks).

The city of Dubuque is on the west shore of the Mississippi River and the the smaller town of East Dubuque, Illinois is on the east side of the Julien Dubuque bridge that carries two-lane route US 20 over the river.  Lock and dam number 11 on the Mississippi was one spot I visited in 1996.  I spoke to a member of the tug and barge crew that day as they locked through heading down stream.

Edward took these two zoomed photos as we turned up the river after passing the new US 61 bridge across the river into Wisconsin less than 2 miles upstream from US 20.   That is the Dubuque Greyhound Park (dog track) at the bottom of this photo.   It is located on an island in the river. 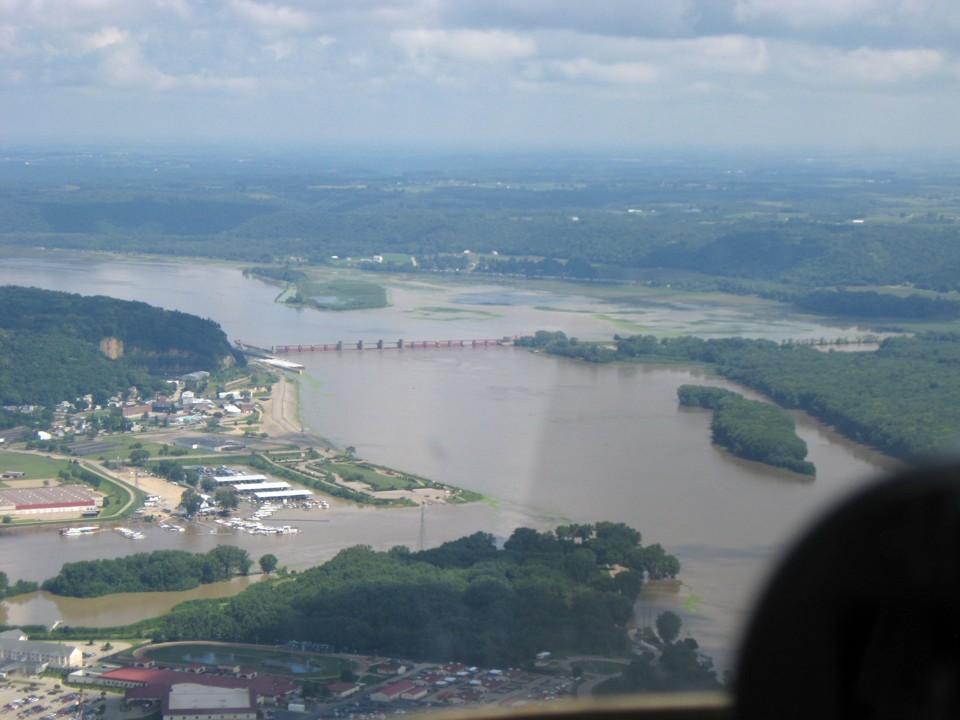 I was leveling and pointing the video camera toward the lock and dam as Edward picked up my camera to take a few photos.  The dog track is now on the left wing and out of this photo.  The lock and dam and Eagle Point Park above it dominate the center of this frame.  The scattered cloud cover above is beckoning us toward Oshkosh, but not until we complete this photo pass up the river.  A couple of bug strikes on the wind shield mark the clouds near the center of this image.

Eagle Point Park is visible on the bluff in this shot I took while I had Edward flying the plane.  Take notice of the railroad hugging the bluff just above the river level.  The first six barges are lashed together to pass through the lock as a unit. 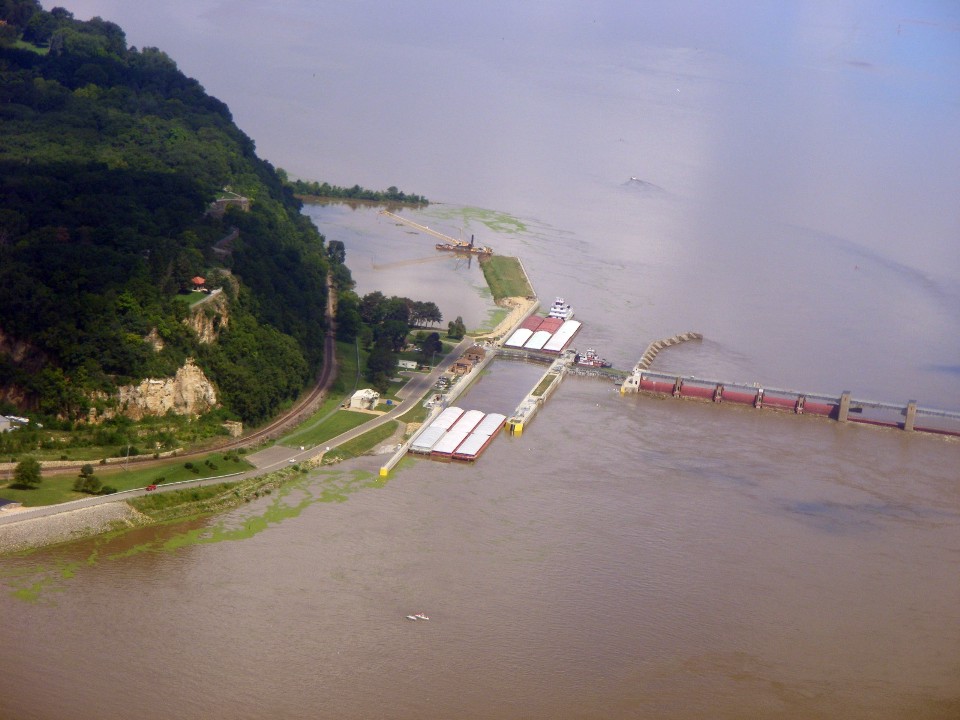 This closer photo shows the first six barges about to clear the lower gates of the lock.  You can see one member of the barge crew walking along side the leading barge.  There are large cleats on the edge of the concrete walkway at the lock.   The crewman is carrying a large looped rope that he will put over one of the cleats as the barges clear the gates of the lock.  The lock controllers are allowing a small amount of water in a the upper end of the lock to float the barges out of the south end at a snail's pace.  There is a lot of tonnage of freight in those barges that must be carefully controlled by one very big rope that will stop them clear of the lower gates.   My son Jason and I watched this process when we were here in 1996.  I was thrilled to see this happening today when I was able to photograph this process from the air and get a video at the same time. 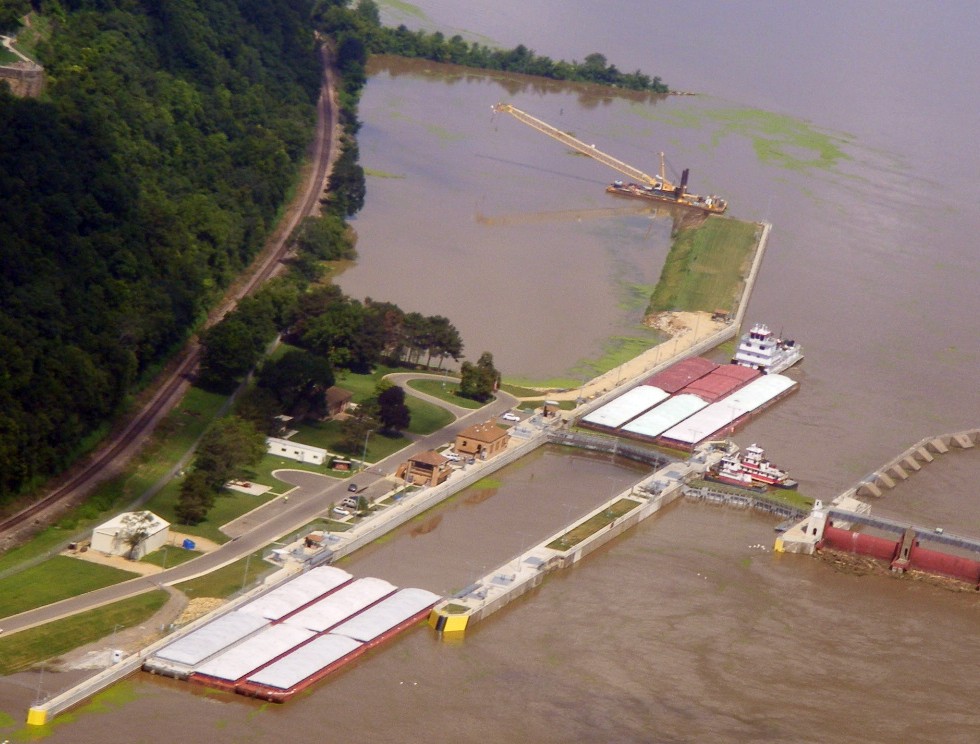 The photo above was taken at 12:11 PM Eastern Time (11:11 AM Central) as we turned on course for Oshkosh, Wisconsin.  The next update to the field conditions is scheduled for 12 NOON Central time.