July 25, 2010: The Quad Cities of Moline and Rock Island, Illinois plus Davenport and Bettendorf, Iowa are directly in our flight path heading for Dubuque, Iowa.  We called the Class C approach controllers for this northbound transit across their air space.  It reminded me of my first student pilot flights across the West Palm Beach Airport (KPBI) near Lantana, Florida where I took my flight training from October 1991 to March 1993. 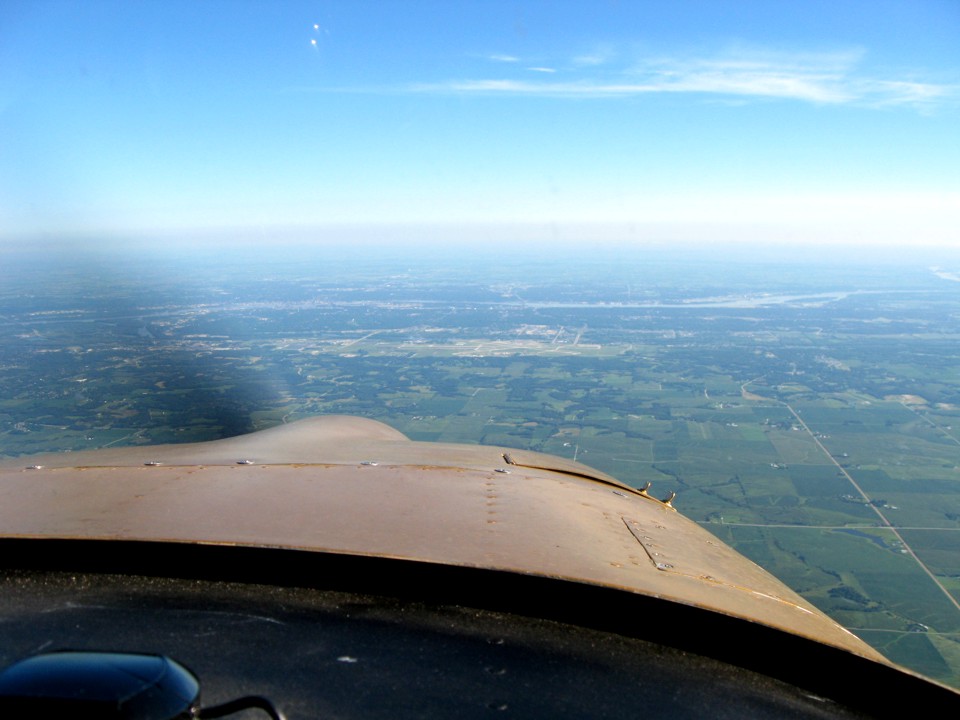 Edward pushed his zoom lens to get the airport in more detail, but unfortunately the photo was not in focus.  I think the auto-focus sensor on his camera was "seeing the propeller" and focusing on it instead of the distant airport. 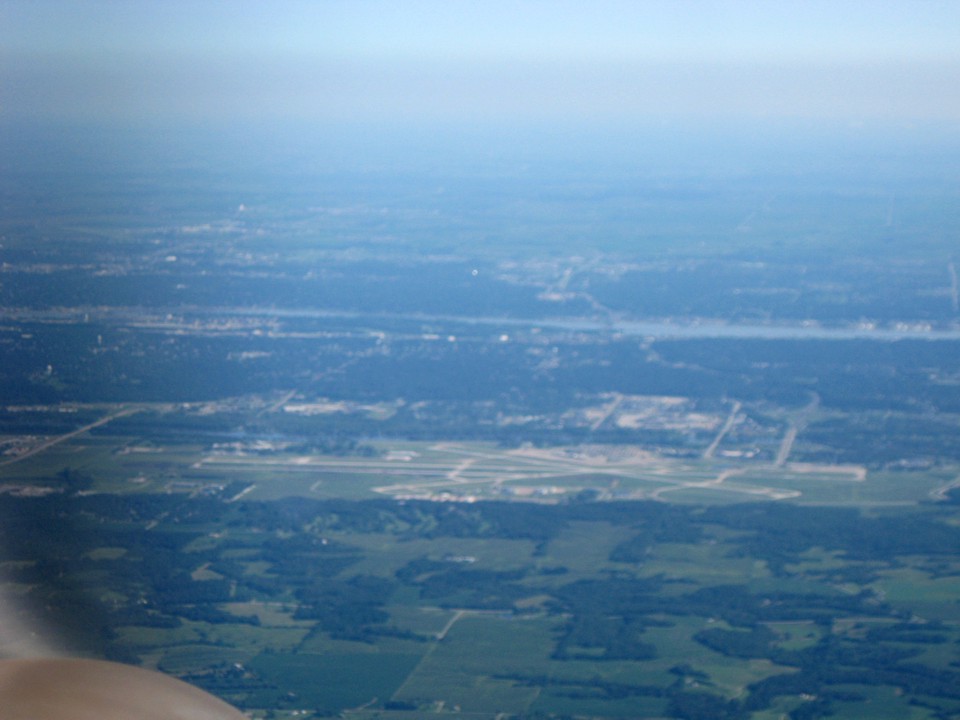 Here is my photo taken at about the same time without the zoom feature. 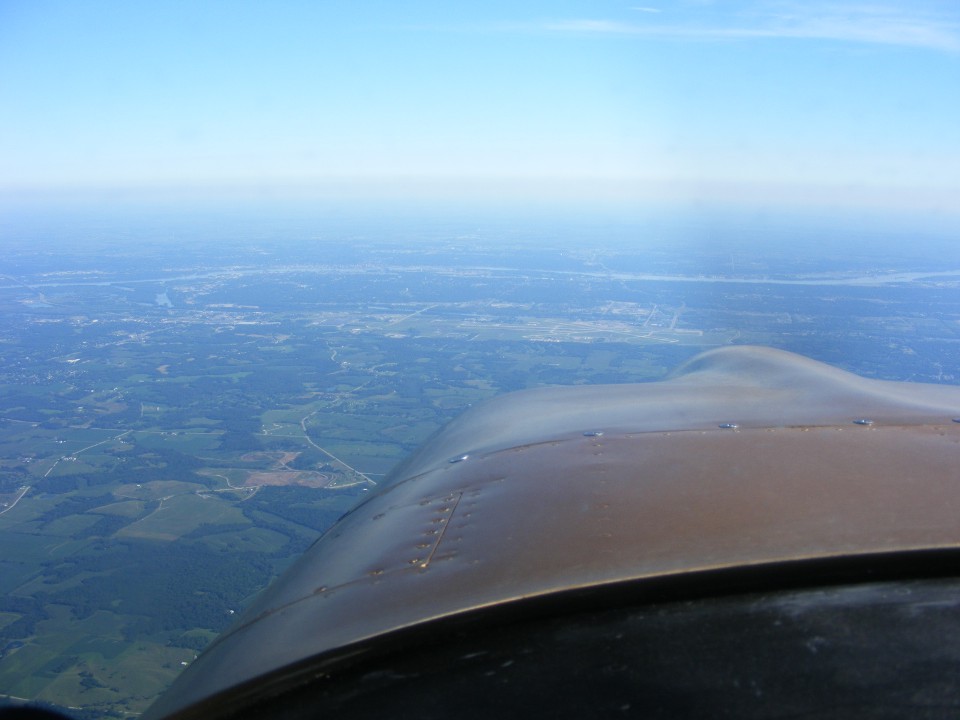 That is Interstate 280 bypassing the cities on the southwest side and crossing the Mississippi River from Illinois into Iowa.  The Rock River joins the Mississippi just to the right of I-280.  The shadow of the canopy and the sunshade above my head are seen on the left wing. 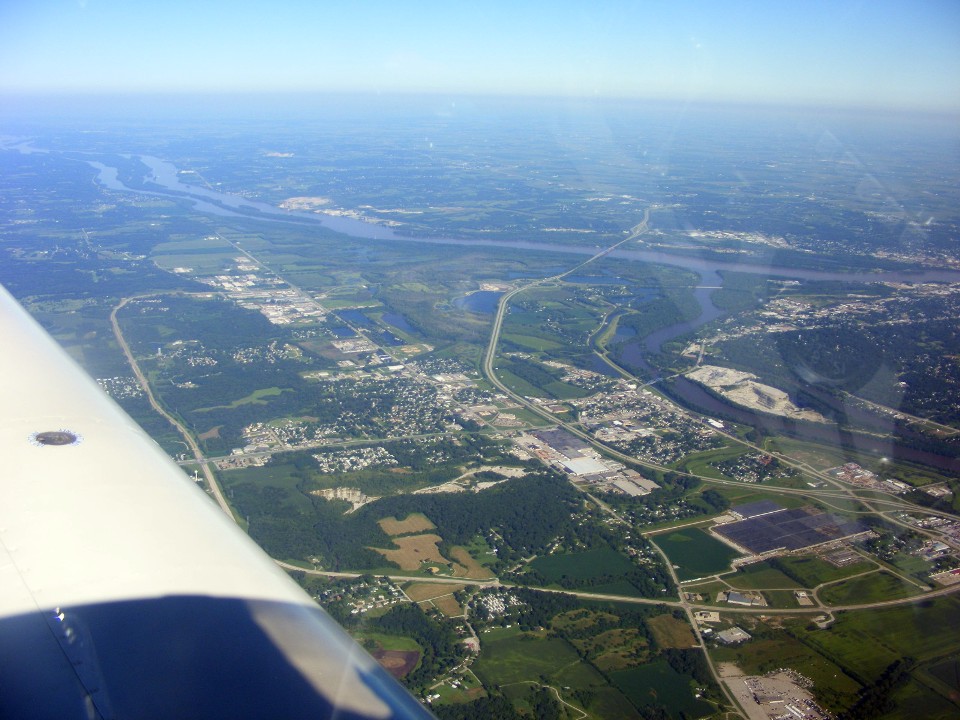 Here is the view looking northeast from above the Quad Cities Airport. 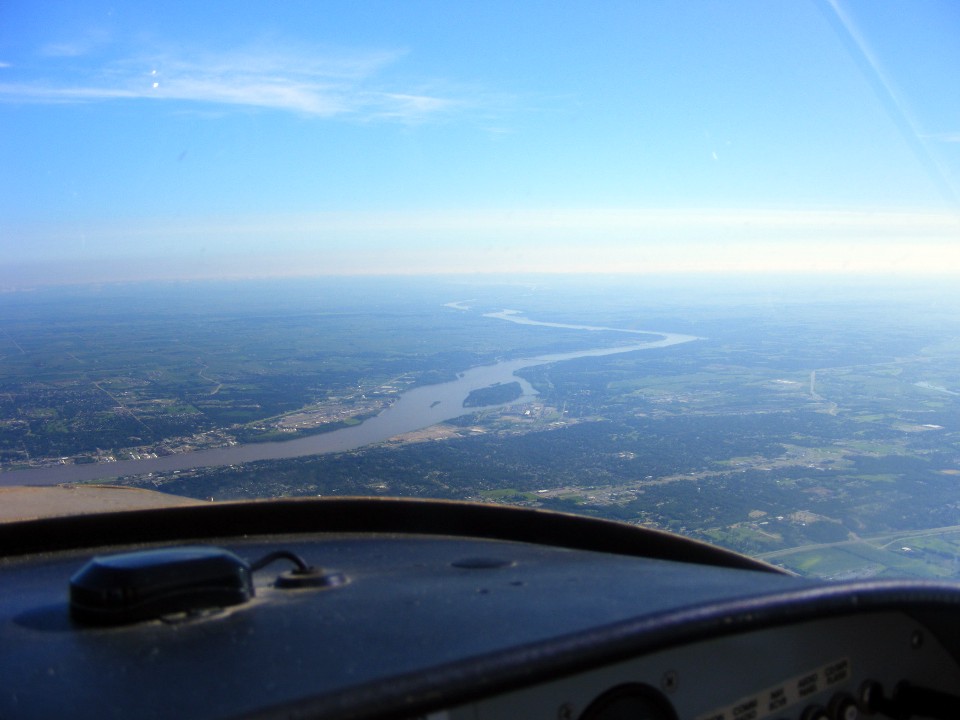 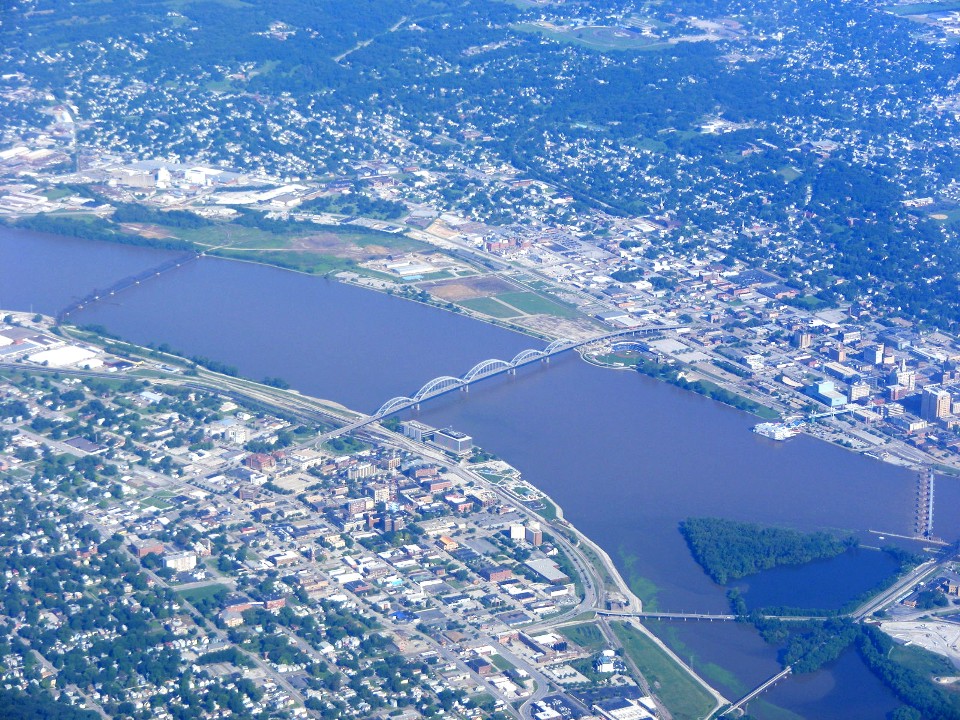 The Davenport, Iowa Municipal Airport is just north of Interstate 80 going left and right across this photo. US 61 is just east of the airport, and is leading north to Dubuque, Iowa.  The blurred dark patch on the right side of the photo is the back side of the propeller which is painted black. 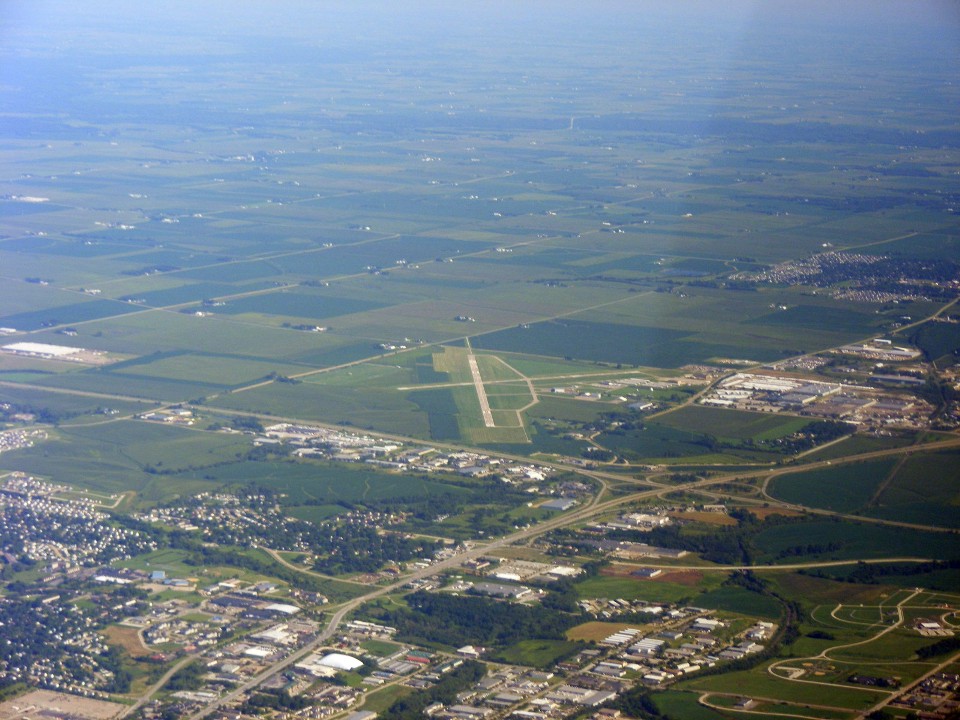 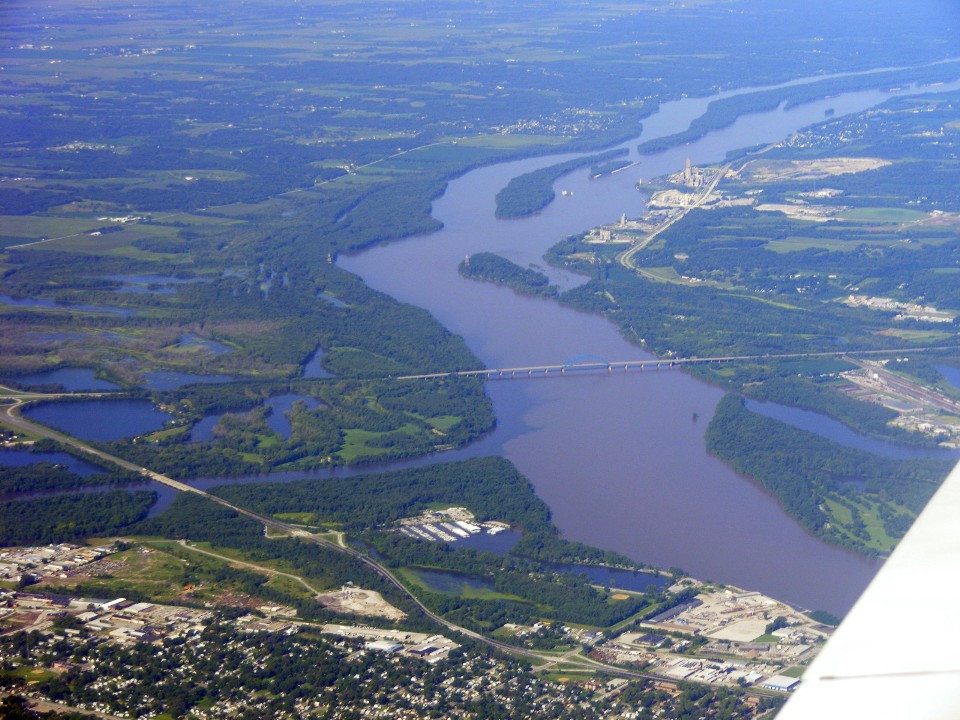 The view looking east shows the Interstate 80 bridge across the Mississippi River and lock and dam number 14 closer to the airplane.  The highway on the left bank is US 67. 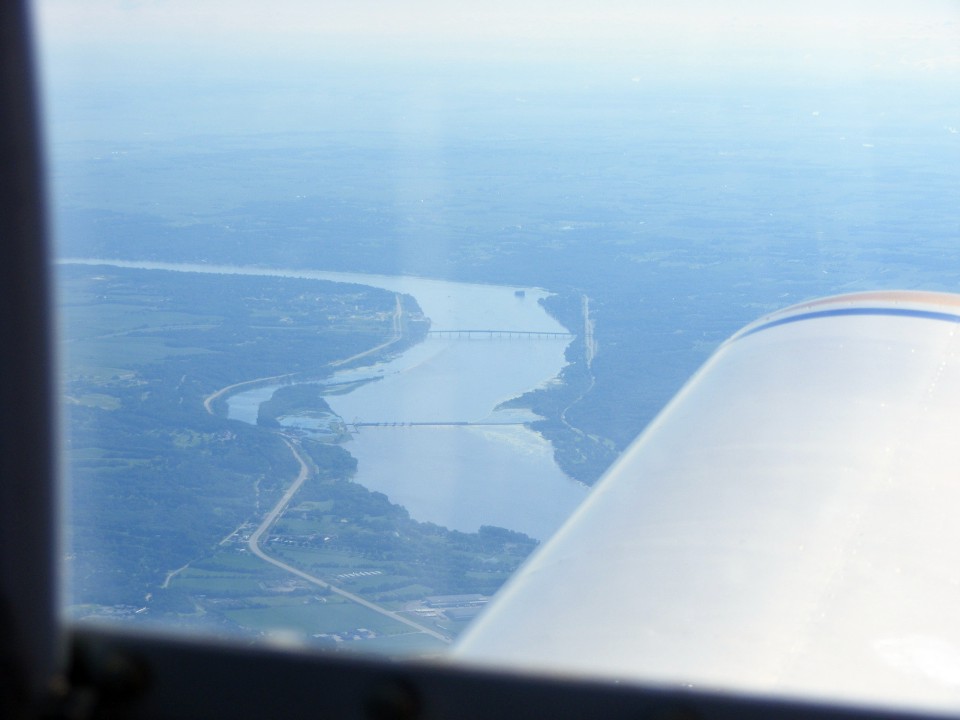 US 61 is closing in on the Dubuque Airport and the city which is hiding in the haze near the horizon on the right side of this photo.  The airport is visible in this photo from 11 miles away.  We would be cleared for the straight in approach to runway 36 at Dubuque Airport.  That grove of trees on US 61 partially hiding the four-lane highway is the location of the small town of Zwingle, Iowa and its 42 households and 100 people according to the 2000 US census. 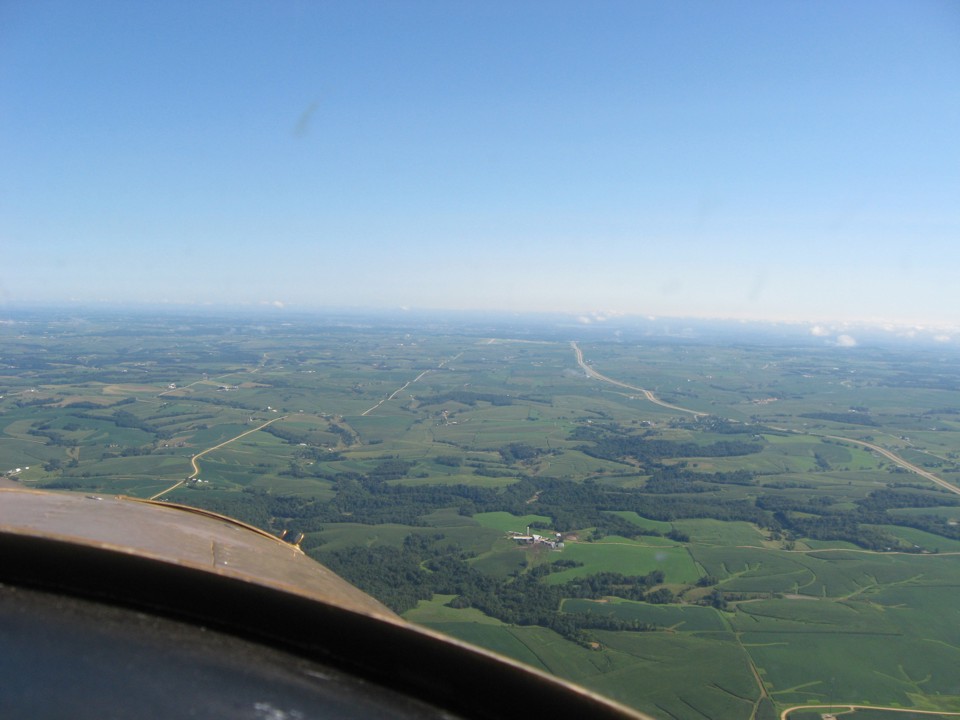 A Lear Jet departed as we were on final to land at Dubuque.  An air tractor was crop dusting just west of the runway, but I was so focused on my approach I did not see him.  Edward was watching him do his job on the nearby fields.  We pulled up to the self-service fuel pumps and topped off the tanks before getting a ride down to the FBO for a break and some updated computer news from the AirVenture web site. 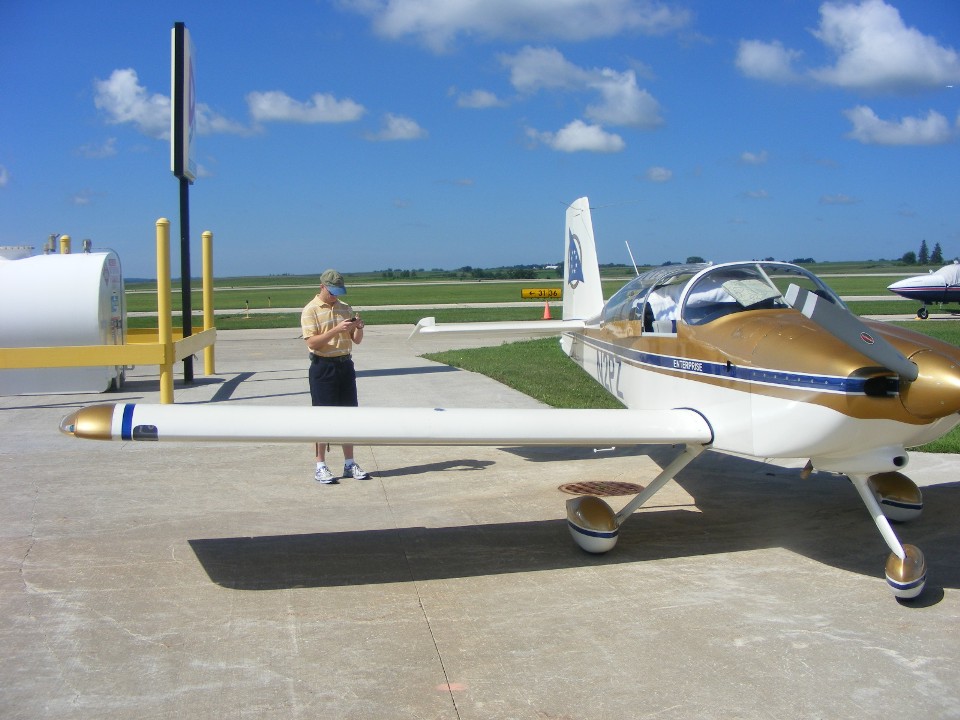 This twin pusher, five-bladed turboprop, canard business plane was a mystery to us here at Dubuque with its foreign registry.  I just checked it online as I am posting this page.  It is a Piaggio Avanti P.180 with a registration from Bermuda.   Those AT-6 World War II training airplanes are here to practice formation flying before they head for a mass arrival at Oshkosh this week. 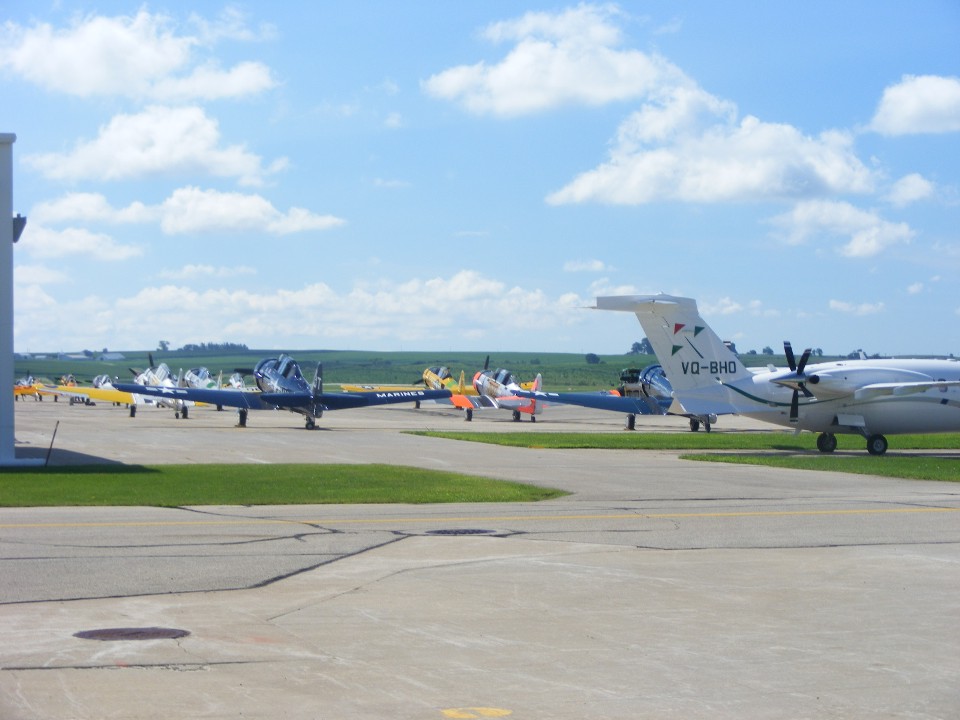 Here is the GPS ground track for the Galesburg to Dubuque flight this Sunday morning, July 25, 2010.

The next pages will cover the fly-over at "The Field of Dreams" and on to Oshkosh, Wisconsin.