July 24, 2010: The town of Macomb, Illinois passes under the right wing at 4:42 PM Eastern Time with mixed weather to the east. 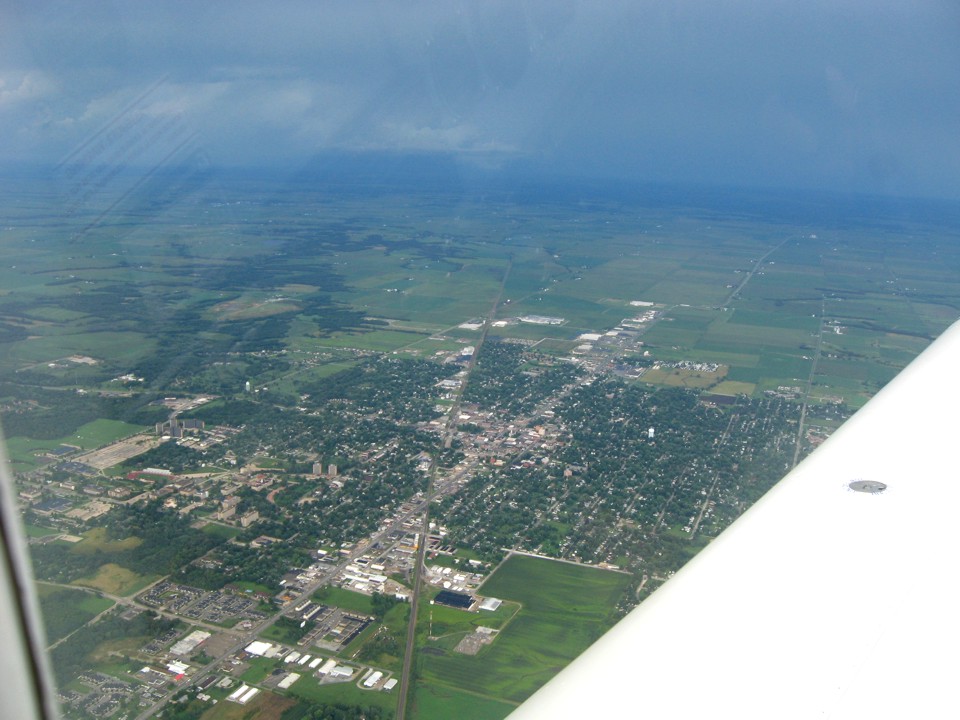 The country airport for Macomb with its east/west paved runway and its north/south grass strip quickly comes into view north of the town. 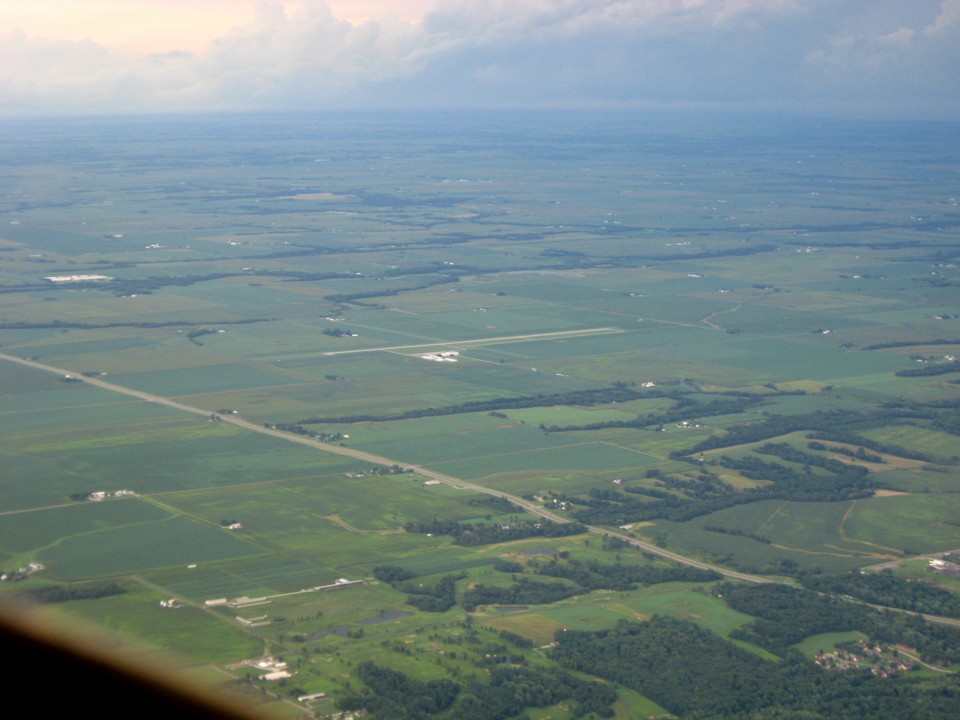 I had the video camera running on the approach and landing at Galesburg.   It was also a silent movie.  Neither of us thought about taking a snapshot with our digital cameras.  Eddie took this one when we pulled up in front of the FBO and spoke to one of the guys asking where to tie-down the airplane overnight. 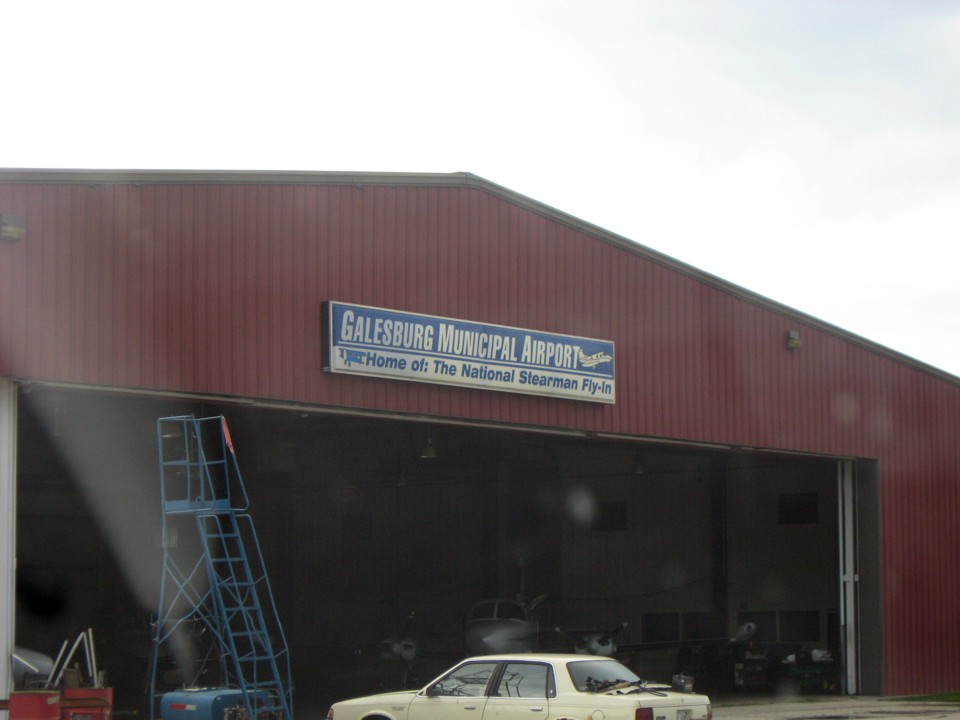 That break in the weather we photographed earlier coming in from the west finally arrived as we tied down the airplane on the ramp. 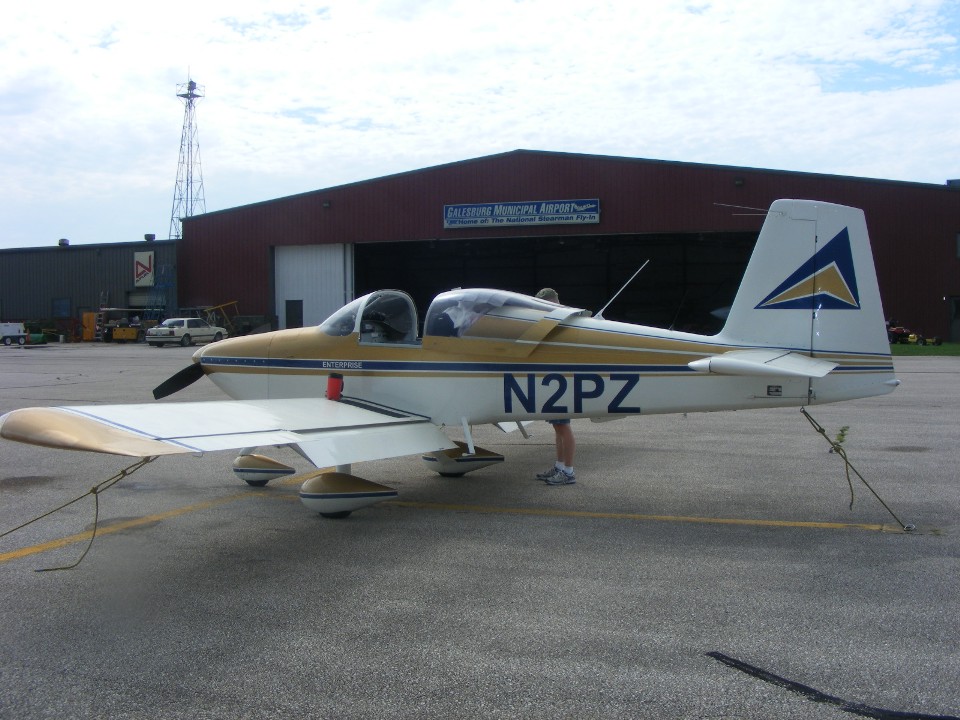 We were unpacking what we would need at the motel in town tonight.  The FBO loaned us the courtesy car for the evening and called to get us a room at the local Comfort Inn.  You can see how the sun came out from the time we tied down the airplane until we got inside and signed out the courtesy car. 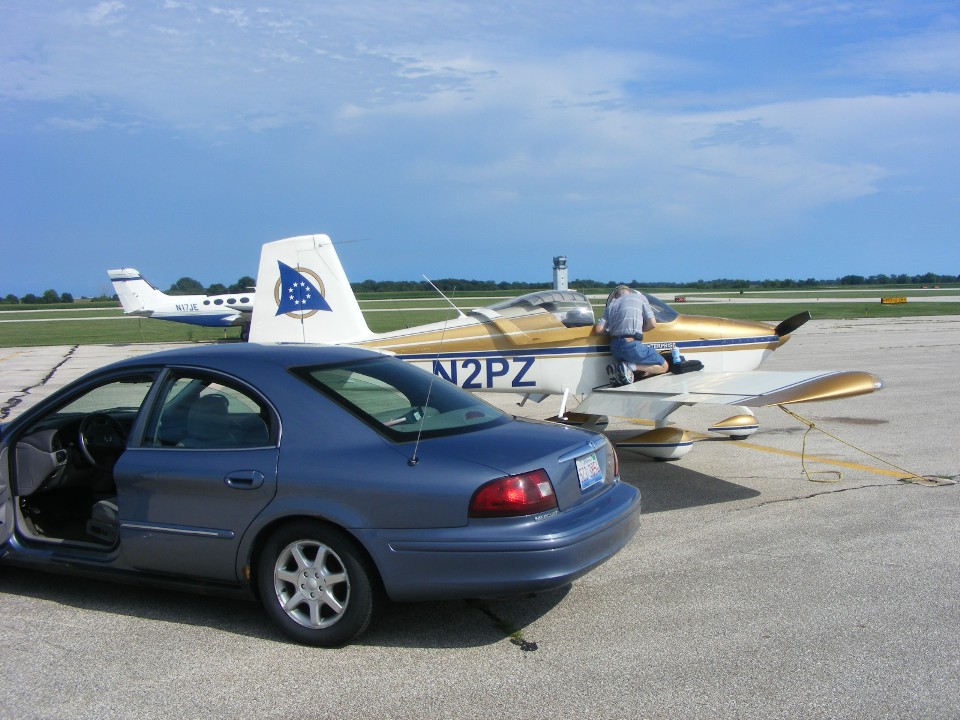 We had some seafood to eat at Long John Silver's and checked into the Comfort Inn to enjoy the air-conditioned room, showering, and a clean bed for each of us instead of tenting on the mushy field at Oshkosh.  Edward re-checked the online information from the AirVenture website.  The next update is scheduled for Sunday morning at 8 AM.

July 25, 2010:  Sunday morning came and we headed back to the Galesburg, Illinois airport after orange juice, waffles, and some fruit at the hotel.  We saw these hot-air balloonists doing their flights across the town before the winds would pick up in with the daytime heating of the land.  This photo is taken from the top of the on-ramp to US 34.  Our hotel was located near this exit. 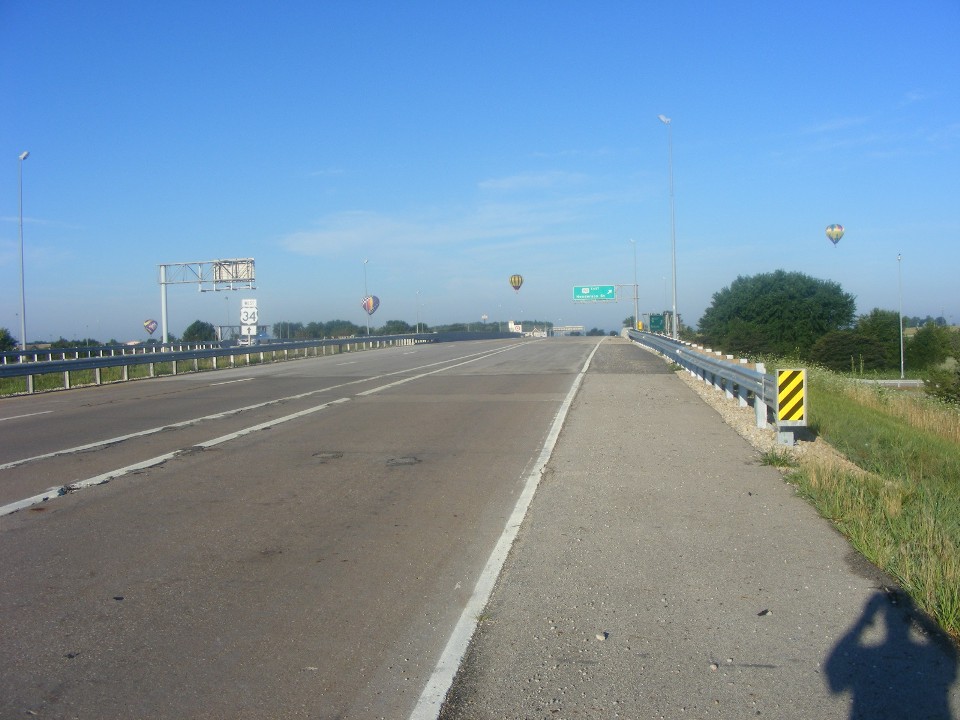 These folks enjoyed a leisurely ride across town.  I had a balloon ride one time when I lived in Florida.  The film in my 35mm camera failed to engage the sprocket and I got NO pictures at all.  With a digital camera, you know immediately that you have the picture saved to memory.  We bought a couple of flash lights yesterday at Target (see sign ahead).  The one I brought from home was five years old and was found broken when I was unpacking the airplane here in Galesburg.  It must have been the heat in Hattiesburg, Mississippi on Friday when I stopped for lunch. 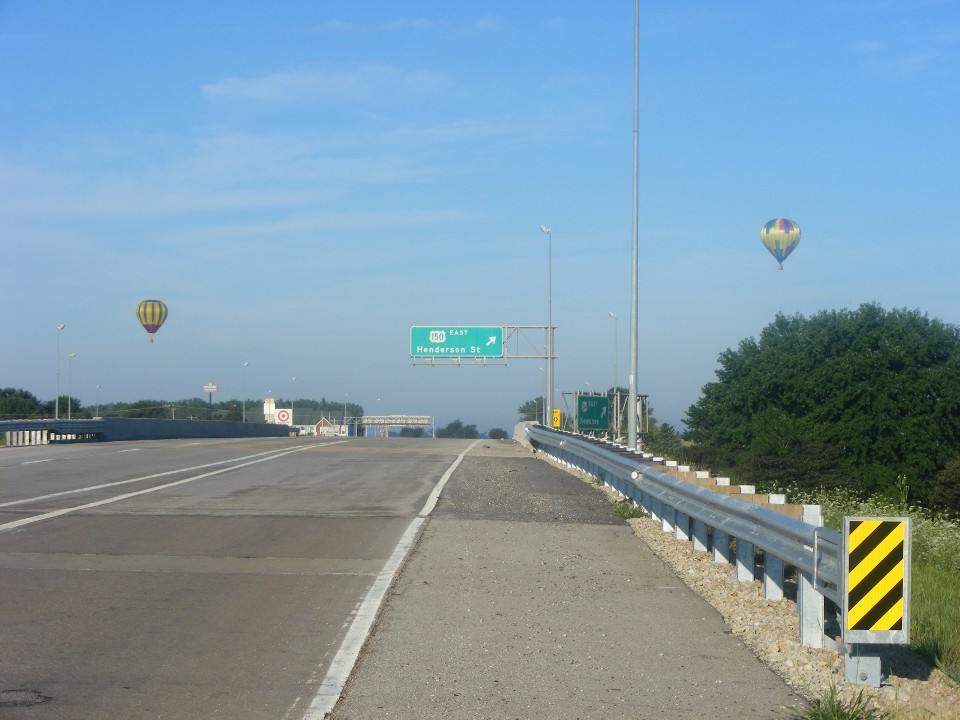 A small adjustment to my polarizing filter adds depth to the color of the sky and the balloon envelopes. 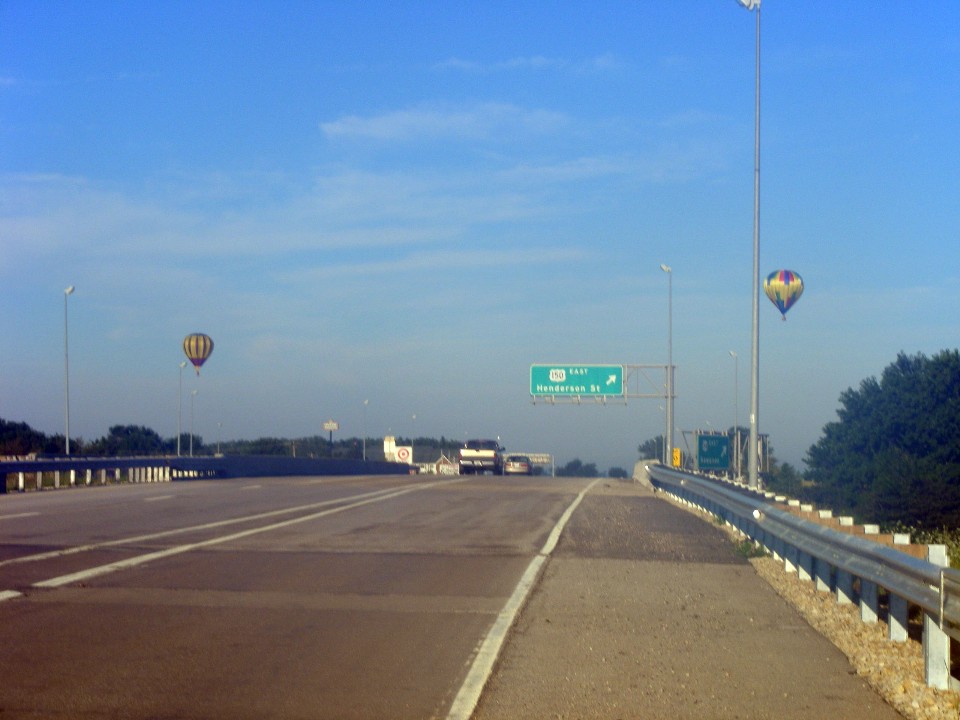 That Meske tip-up canopy modification to Van's sliding canopies makes it much easier to load and unload baggage.  It is a good feature for times like this when there is plenty of cargo.  The courtesy car is almost completely hidden in this photo taken by Edward.  You can just barely see my hat if you look through the canopy. 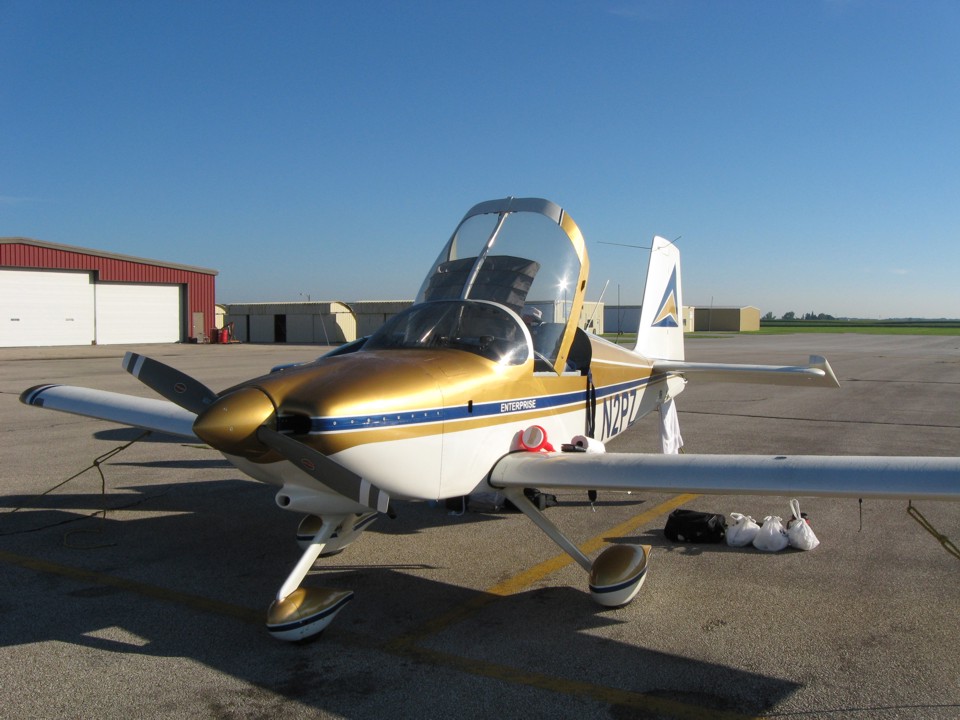 From this angle, the sun lights up the metallic colors of Enterprise.  The clear skies to the west are a welcome sight. 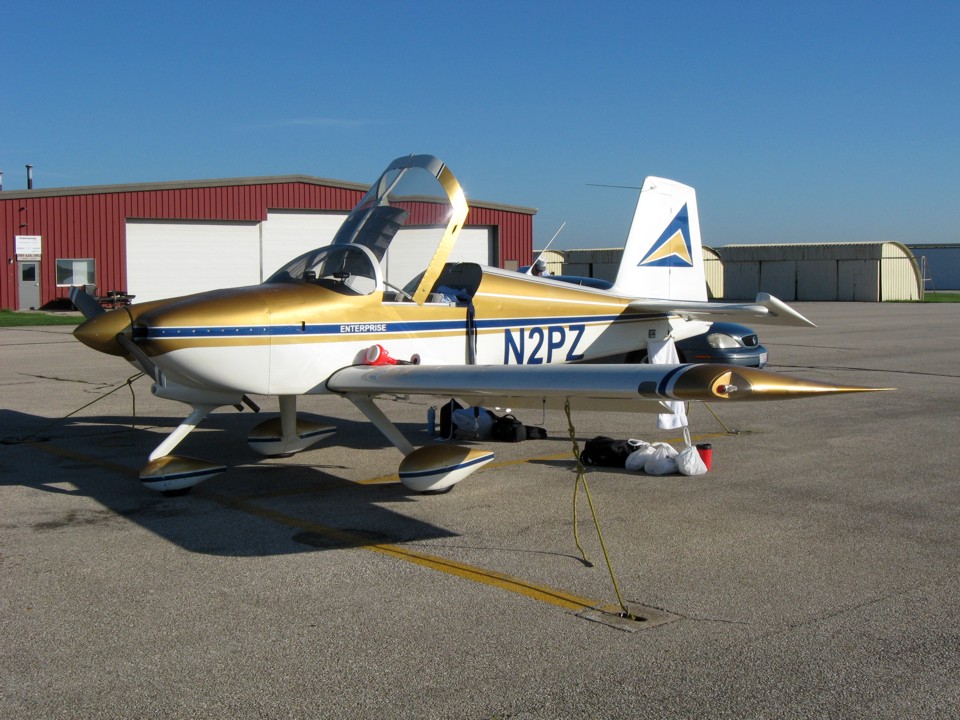 The courtesy car has been unloaded and put back in the parking spot by the FBO office.  Here is my Galesburg ramp photo just before departure.  There were a number of Kildeer birds on the taxiway as we headed down to the south end of the runway for departure in the calm morning air. 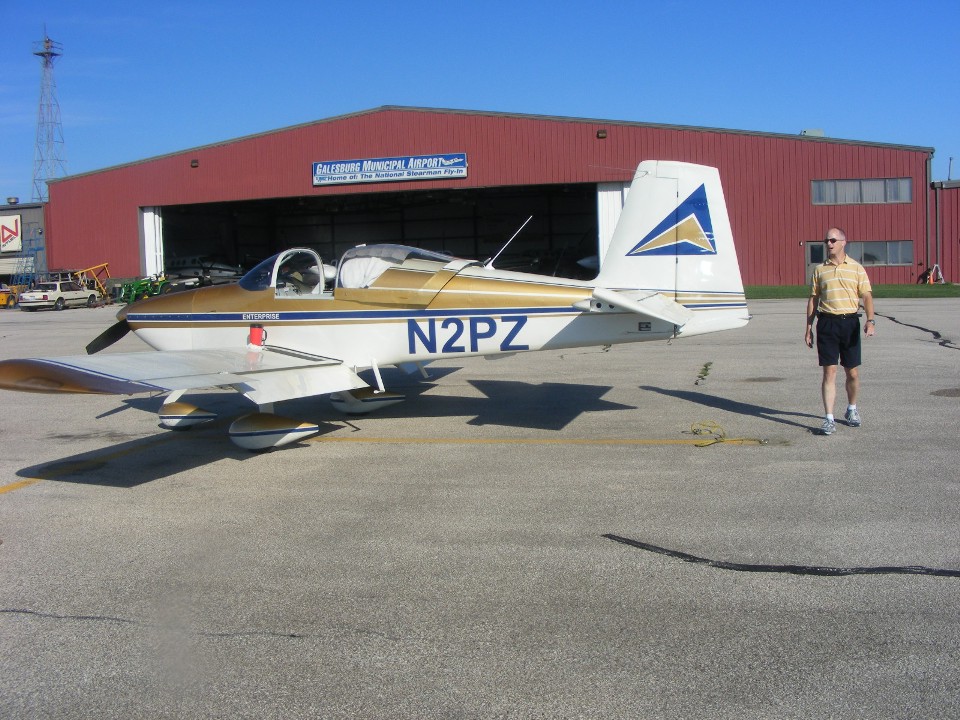