July 24, 2010: The ride to Saint Louis was short and bumpy since we flew along below the clouds and in the thermals from the ground below.   As we approached the Mississippi River south of Saint Louis, the clouds cleared due to the effects of the river and the water temperature.  I spotted the tug pushing these barges upstream and had Edward get some photos as we flew past.  The flooding near the river tells of all the recent rain falling into the tributaries north of this location. 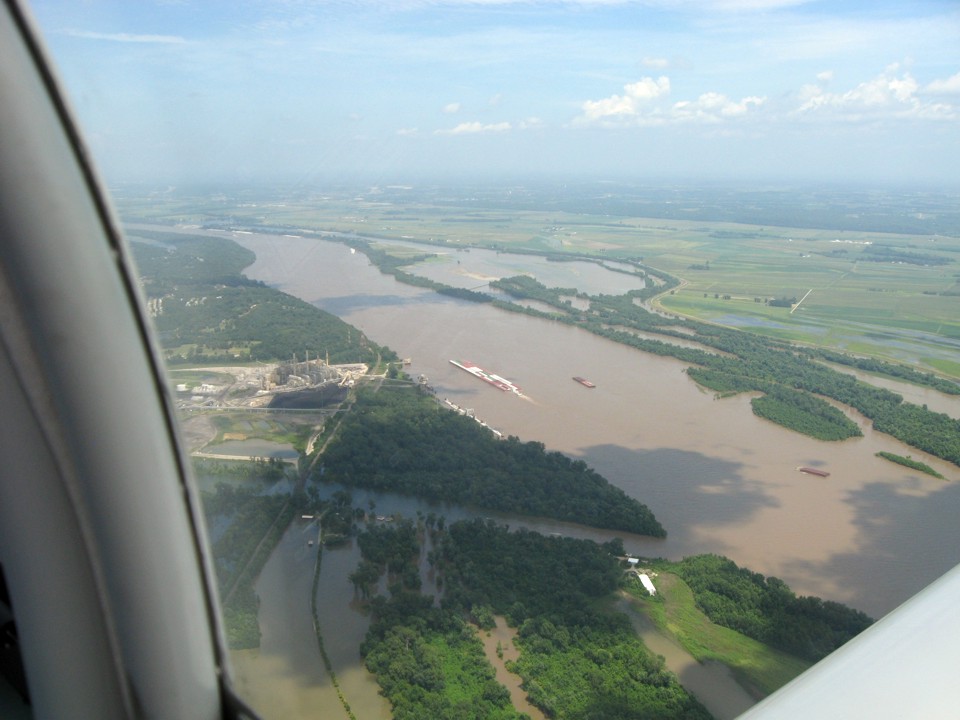 That tug is pushing 35 barges.  That is the most number of barges ahead of one tug boat I have ever counted on the river on any of my flights across the Mississippi River.  The other good thing to see in this photo is the barge loading facilities on this side of the river at the bottom of the photo.  At the bottom right corner of the picture is a place to moor barges either before or after they are filled here. 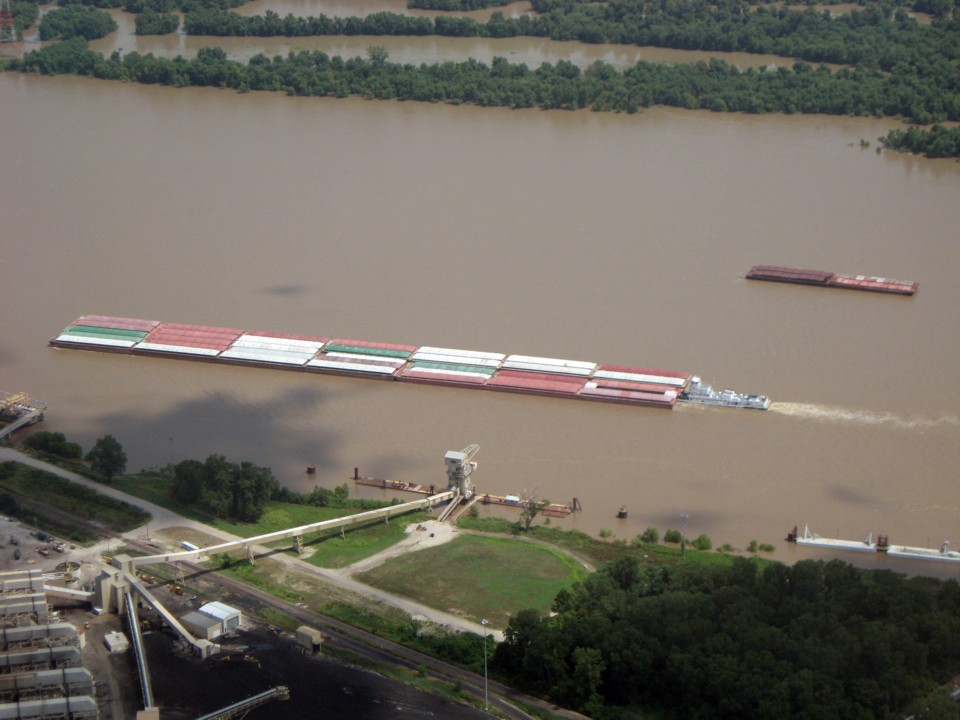 We contacted the KCPS control tower at the East Saint Louis Airport.   Since the Arch is inside their class D air space, we had to get permission for our fly-by and photo shoot.  The video camera is turned on, while I take photos with my digital camera.  Edward is flying the airplane after I give him the landmarks on the ground and the minimum altitude that will keep us legal to fly in this area without violating FAA regulations. 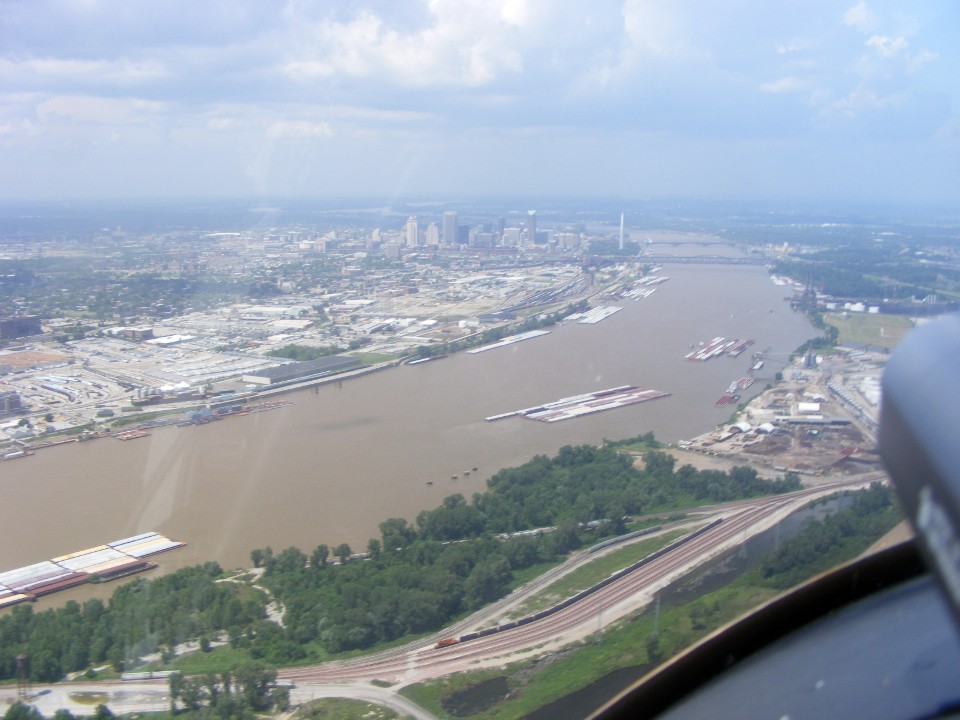 There are a large number of barges anchored near shore facilities for loading or unloading as needed.  You can see railroad yards are here to move freight from the river overland.  The stainless steel Gateway Arch is in the distance viewed from its southern edge appearing as a monolith like the Washington Monument in our nation's capital.

As we near the railroad and highway bridges across the river near downtown Saint Louis, the parabolic shape of the Arch is slowly revealed.  The railroad at the right side of the photo is one-half mile from the arch.  I have checked the distance on a digital map before this flight.  Edward is flying the airplane at this time and will remain east of the railroad at 1,400 MSL. 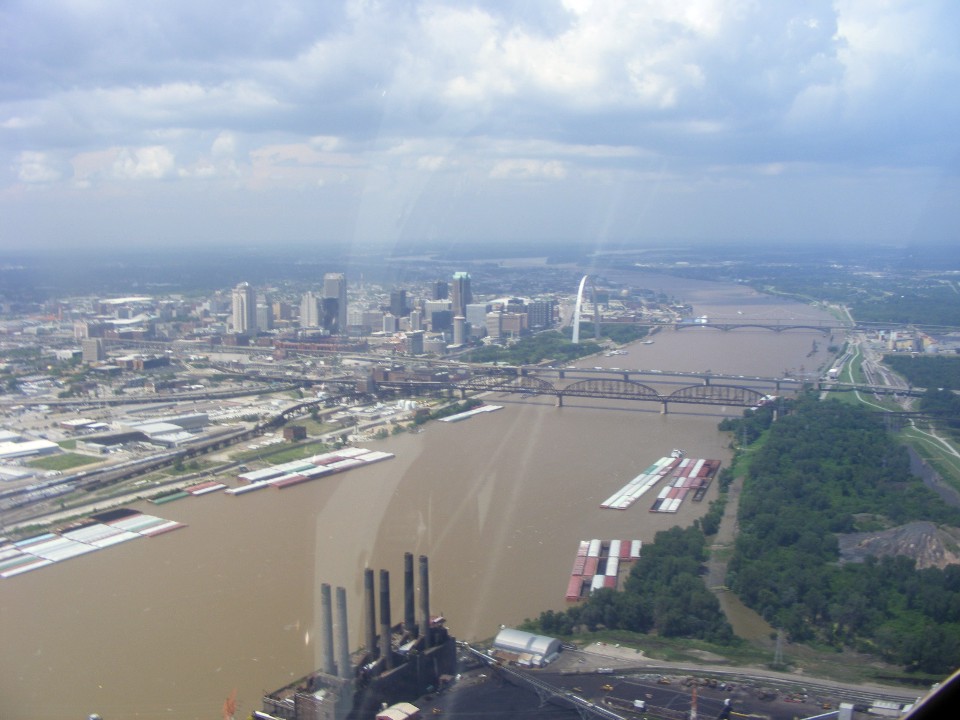 A museum is located underground below the Arch.  It is all about the westward expansion after the Louisiana Purchase added much territory to the USA.  The elevators to the top of the arch are reached via the museum. 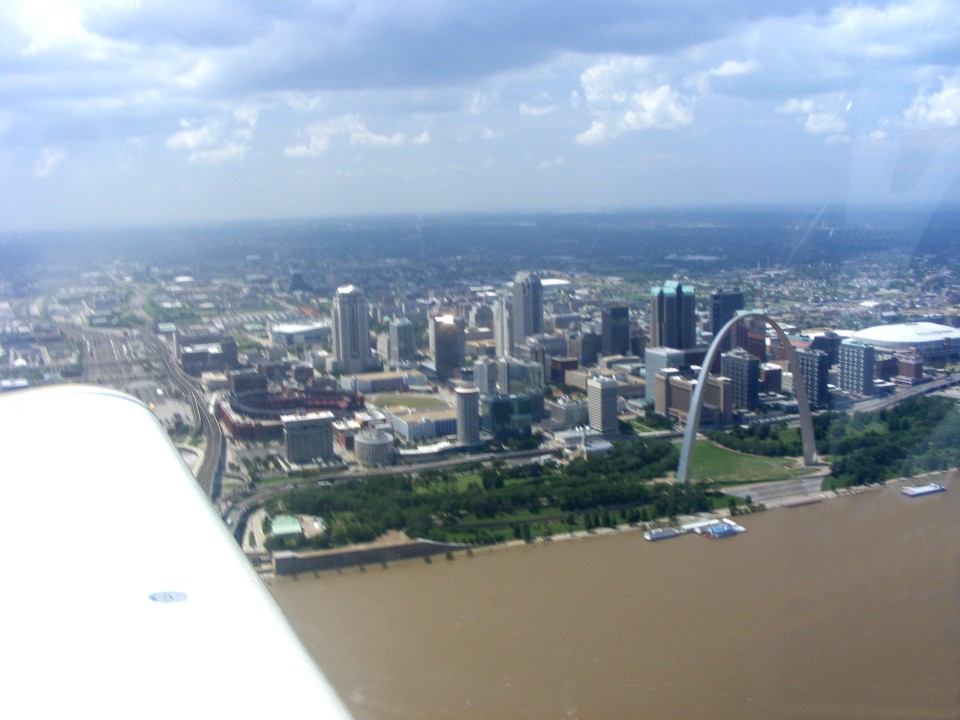 The arch is 630 feet tall and 630 feet apart at the base.  You can stack the "Statue of Liberty" on top of herself and still have head room below the Arch.  The elevators run up and down both sides of the arch from the underground boarding areas in the museum area.  There is an observation deck at the top about the size of a small bus.  The Arch is well worth a stop when you are driving past this area. 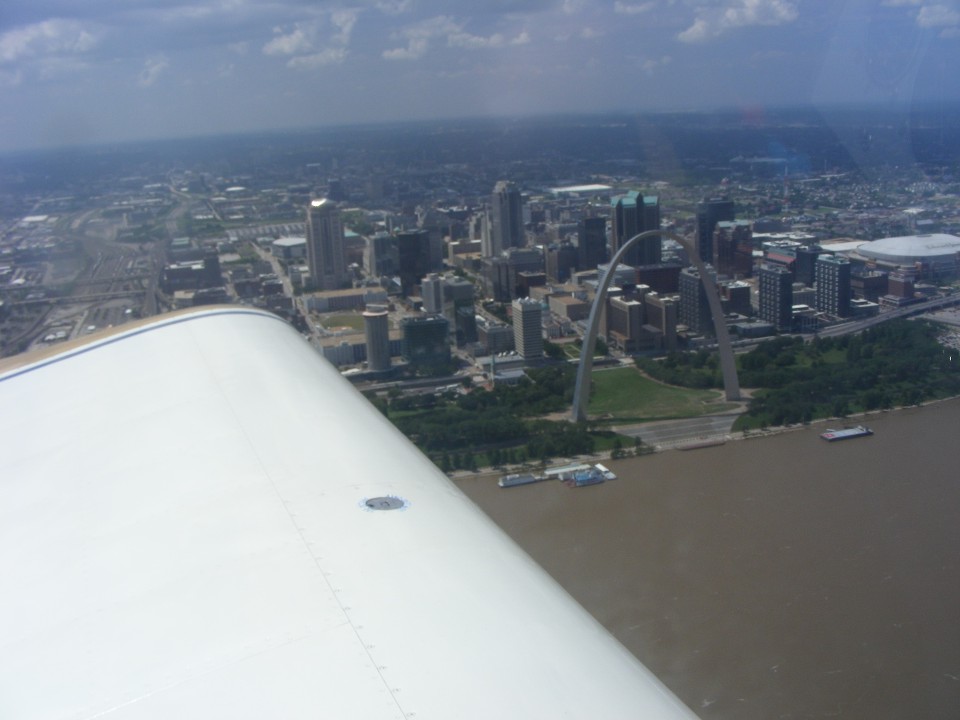 Once we passed the Arch, I took over flying the airplane and executed a tear-drop turn north of the downtown area staying on the Illinois side of the river.  It was Edward's turn to take photos and use his video camera.  Here is a snapshot he took as I was completing the turn and rolling right for a "wings level" pass down the East side of the river. 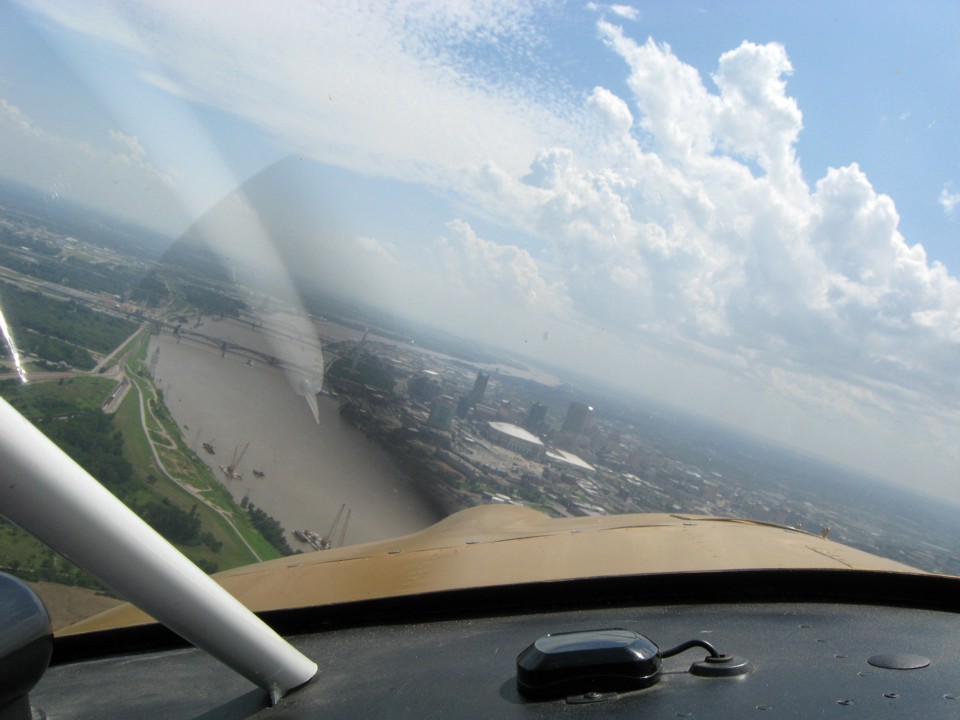 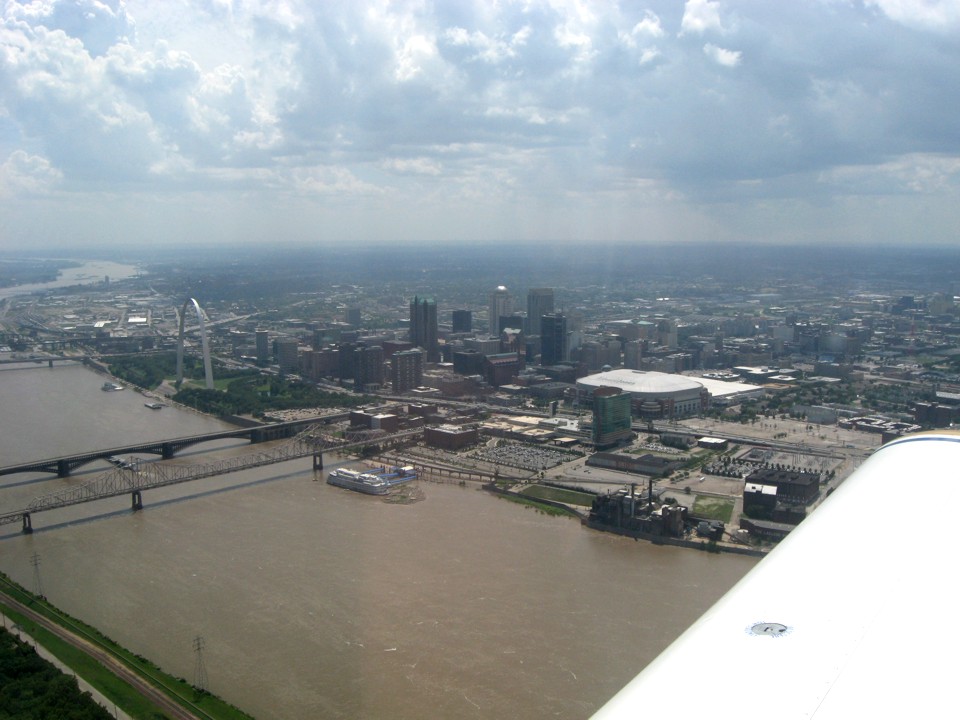 I got this snap shot from my side of the airplane. 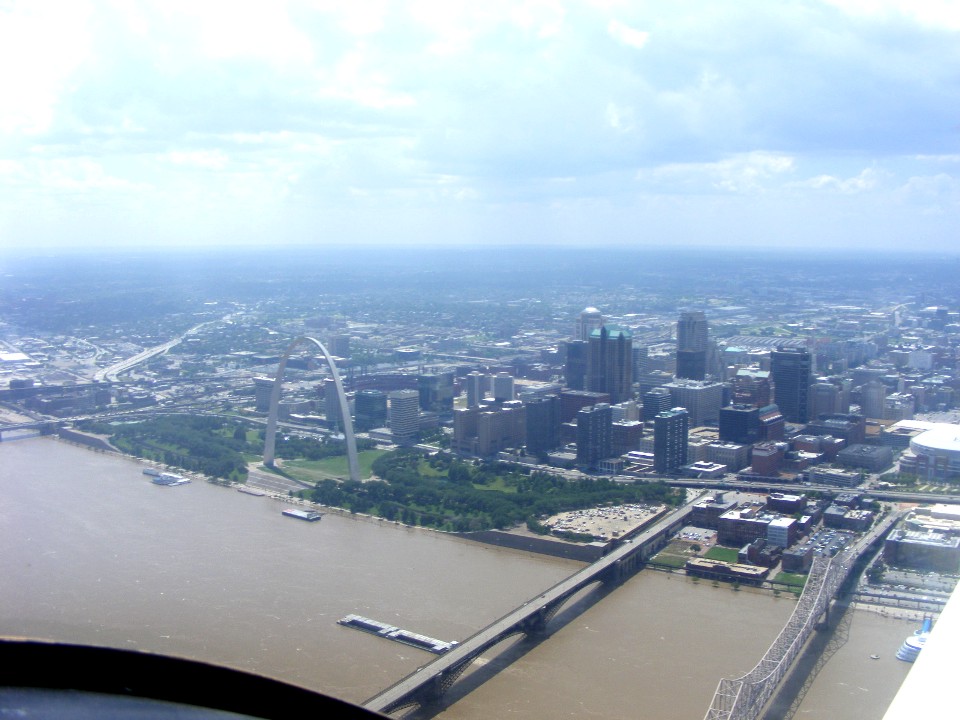 The Arch is in a shadow from a cloud and not gleaming as in earlier photos. 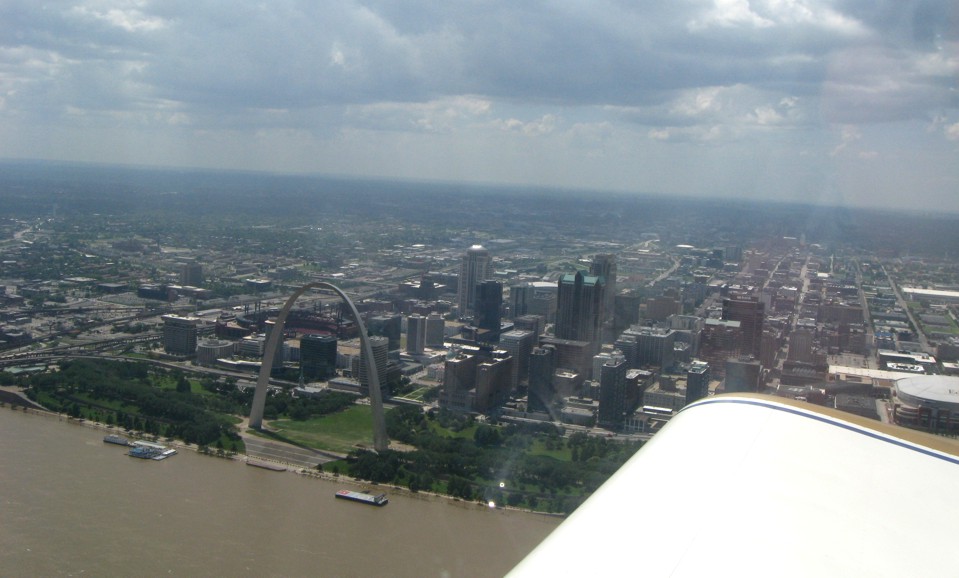 The Saint Louis Downtown Airport (KCPS) at Cahokia, Illinois is just across the river and south of the Arch and all those bridges you have seen in the photos.  We have been monitoring the tower controller and her other air traffic coming and going from here during our time inside their class-D controlled air space.  Edward snapped this photo as we made our southbound pass down the river.  A Lear Jet is about one mile behind us and cleared to land on the longer runway seen in this photo.  I have the Enterprise at full throttle to get out of his way to the approach.  The video camera on the panel is still being recorded on my digital camcorder by my seat. 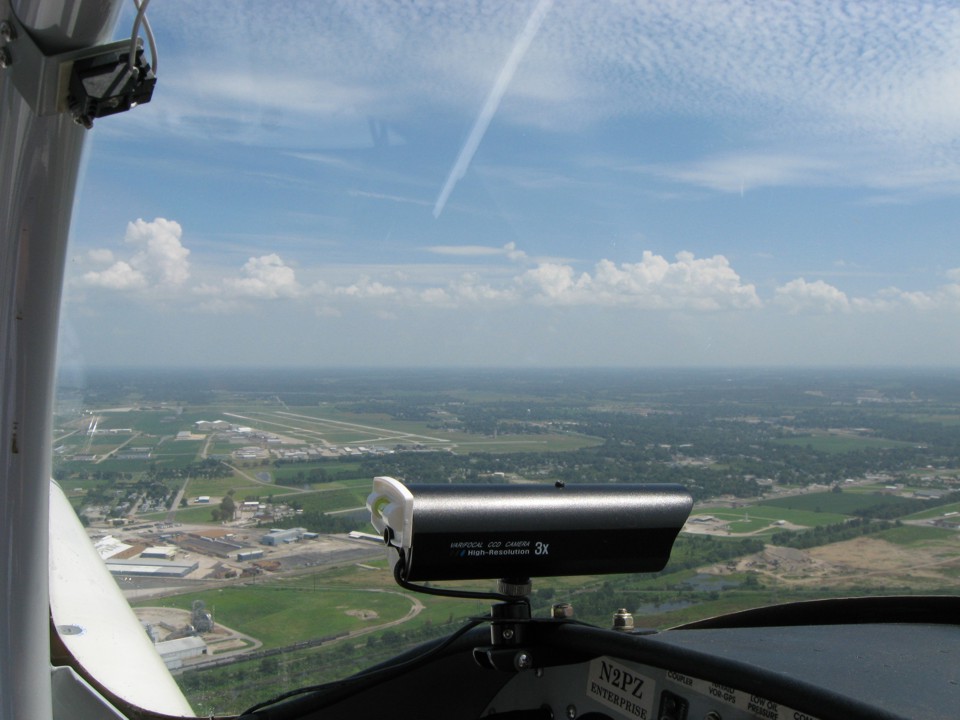 Here is the GPS ground track of the three passes in front of the Gateway Arch.