July 24, 2010: The East Saint Louis Airport controller was very helpful in our photo and movie passes by the Arch and the waterfront along the Mississippi River.  We thought we were getting all the radio transmissions and our intercom conversations on the recording, but it was later discovered the audio cable had been disconnected.  I went over the tape later that evening at the hotel in Galesburg and discovered the silence.

Eddie took this last photo of the Arch and the video camera as we made the last pass northbound to leave Saint Louis behind.  To see the video of the arch flyby with my later narration, RIGHT CLICK HERE and download the 76.6 megabyte MPEG video to your hard drive, then play it from your hard drive. 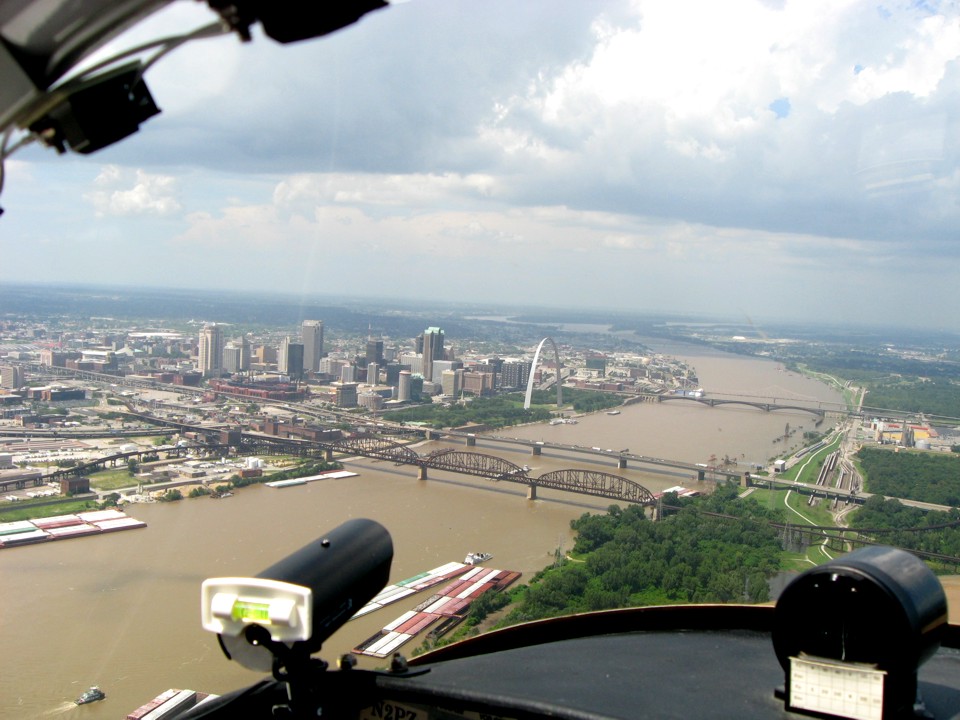 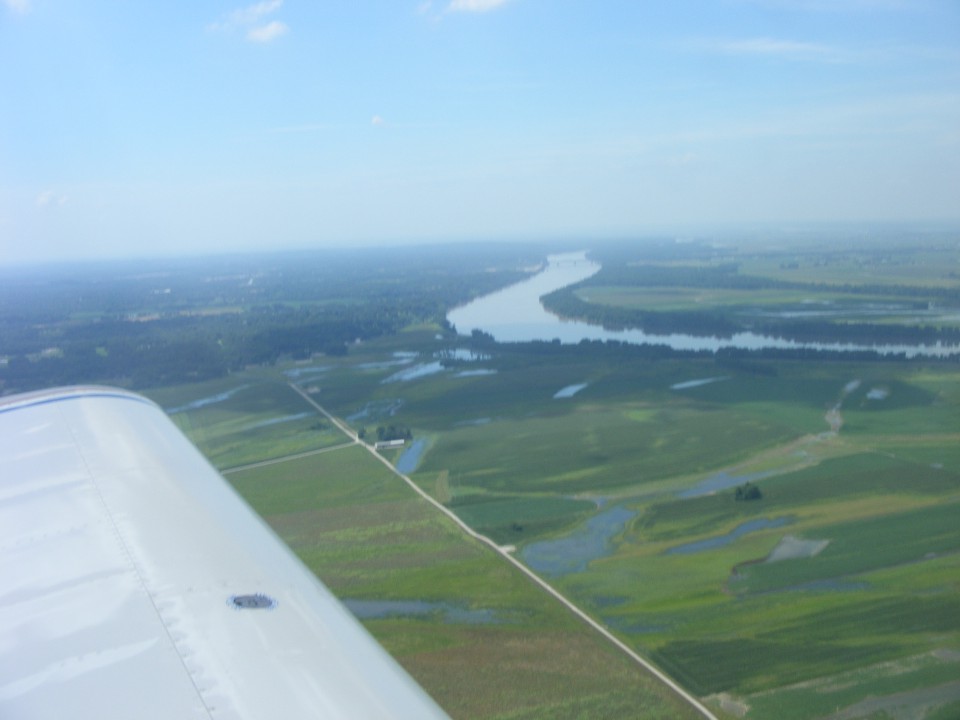 Here is the point of confluence of these two mighty rivers.  From this viewing angle, the Missouri River appears to have a smaller width than it actually has since it is partially blocked from view by the trees. 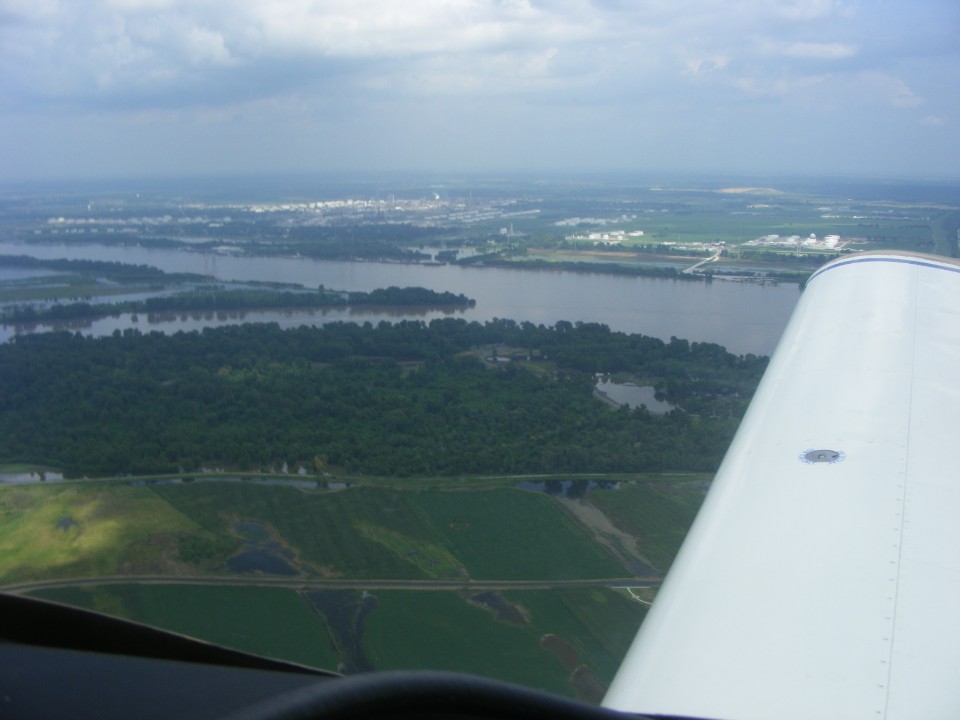 When we began our departure from Saint Louis, the intent was for a direct route north to Galesburg, Illinois.  As we cleared the heavy air and haze of the city, a large developing thunder storm ahead convinced me it was time to head west around the back side of the storm.  Edward took this photo as we were also avoiding an MOA in western Illinois.  We turned the corner of the MOA as we reached the Mississippi and climbed up into cooler air as we cleared the northern boundary of the Saint Louis Class B air space.  This photo was taken at 4:06 PM Eastern Time. 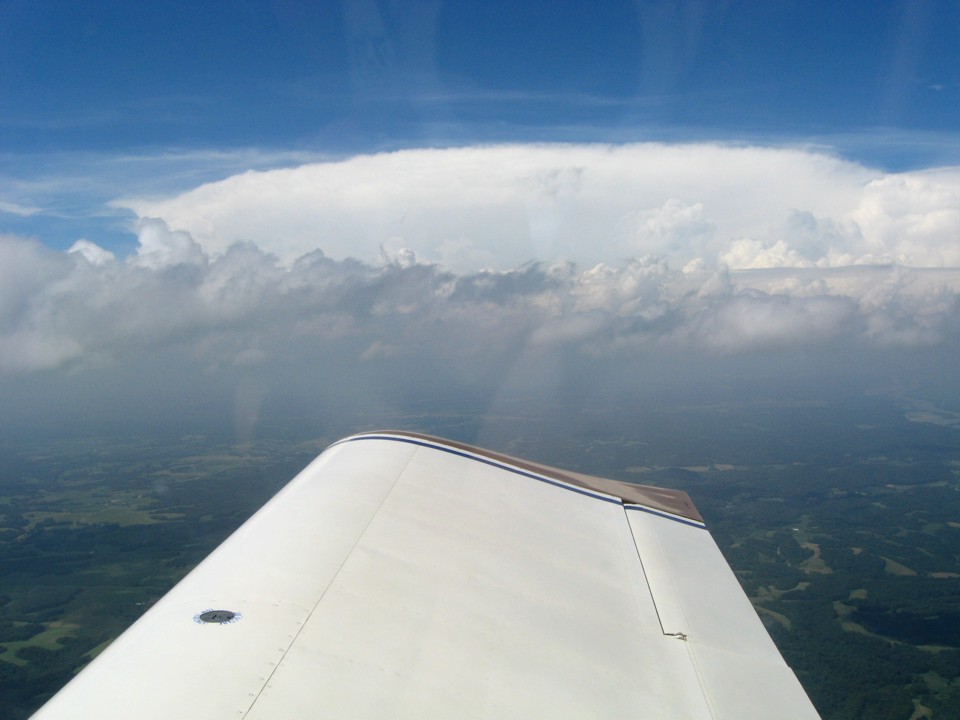 I took this photo at 4:19 PM as we climbed higher and we had a better vantage point due west of the storm.  The winds aloft were 30 MPH from the west.  The crab angle was very noticeable even considering our forward speed of 160 MPH. 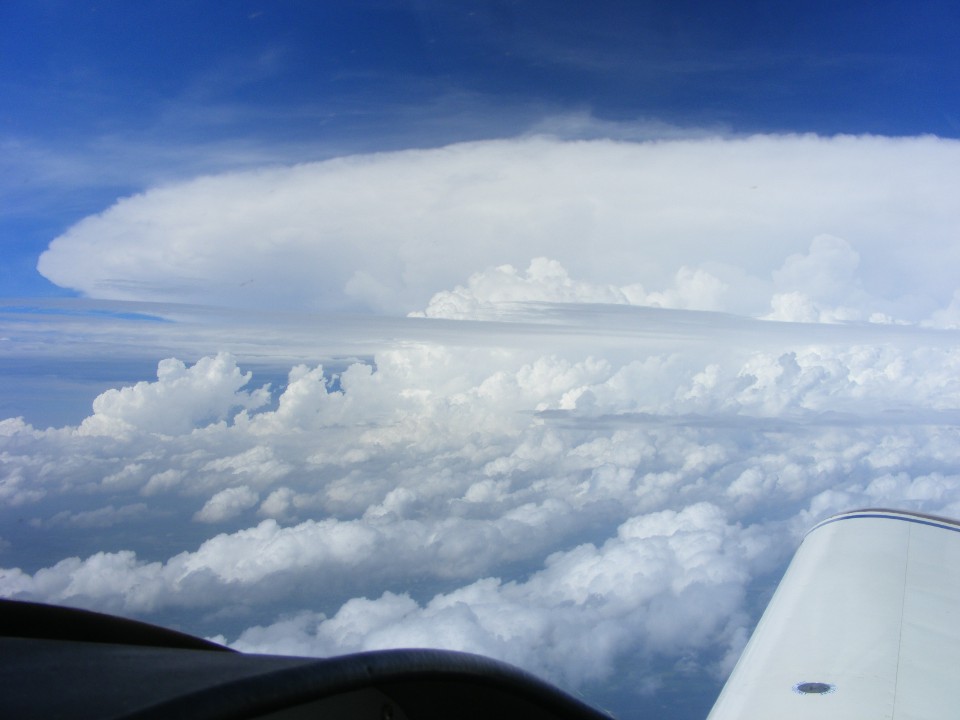 Here is the view of the Mississippi River on the left side of the airplane somewhere south of Hannibal, Missouri.  As you can see, my camera focused on the inside of the airplane, not on the river below.  I must be more careful where the center of the frame is placed on these shots. 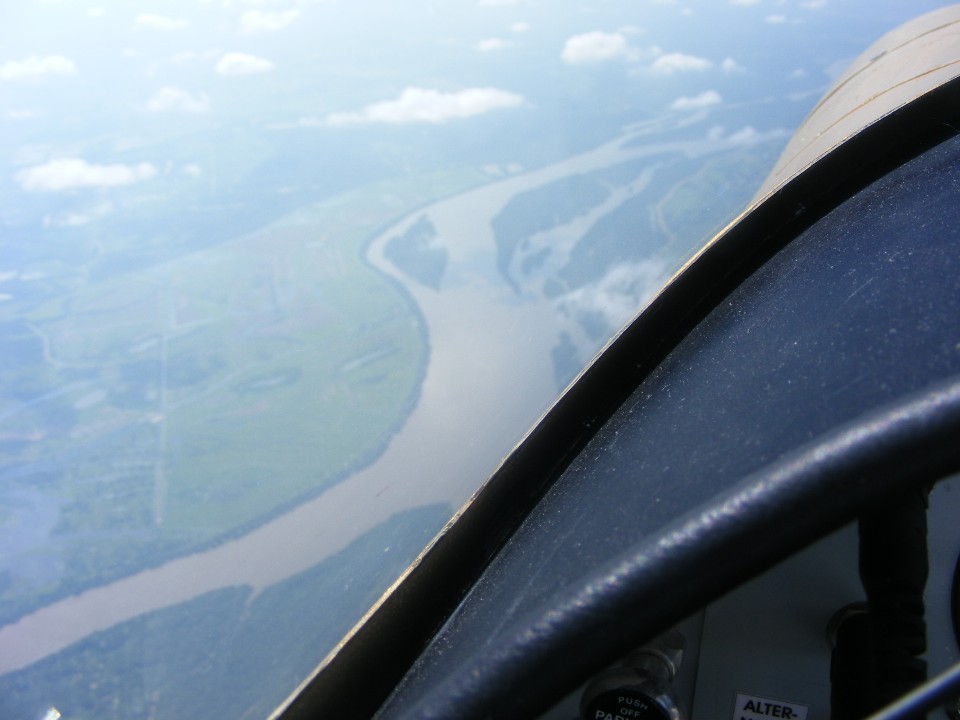 You can see the rain is just a few miles off the right wing and sunlight is in the areas closer to our flight path here in Illinois just east of the Mississippi River banks.  The instrument panel is reflected from the inside the canopy since Edward has no polarizing filter on his camera. 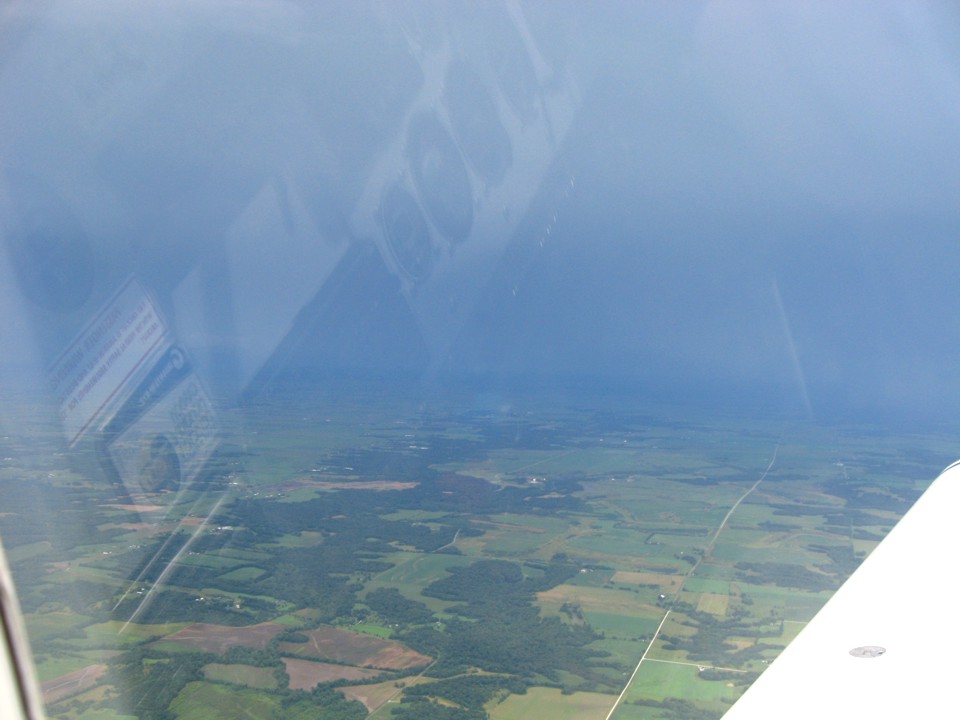 The course ahead toward Galesburg is behind the cold front and the air is clearing as we turn on to the GPS direct route to KGBG Airport. 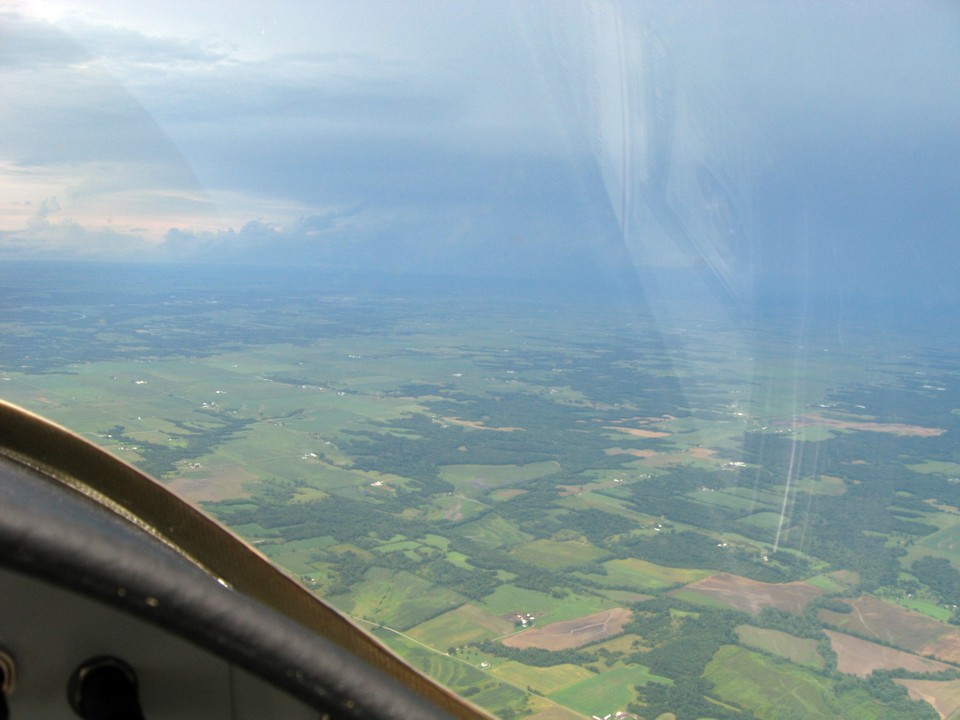 At this time the winds are now a tailwind and the GPS ground speed is up to 219 MPH. 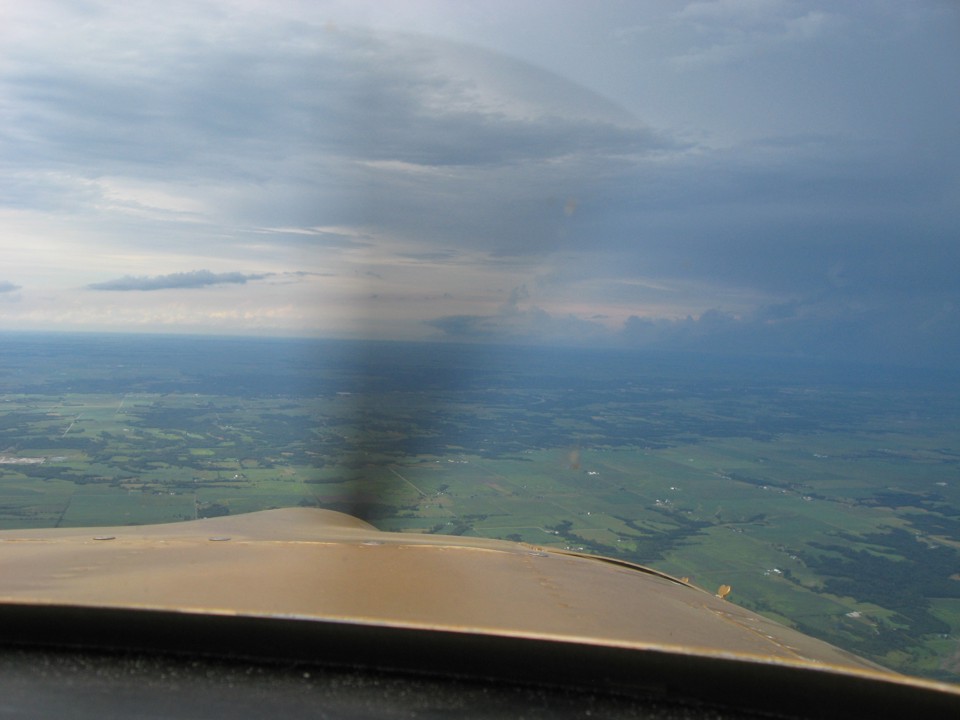 The view looking west shows some clear skies but the possibility for more light rain.  We will reach Galesburg and be tied down well before the weather from the west will be there.  Those high-level clouds are shading the land in this area.  The outside air temperature is 20 degrees cooler than what is was in Saint Louis and points south of there. 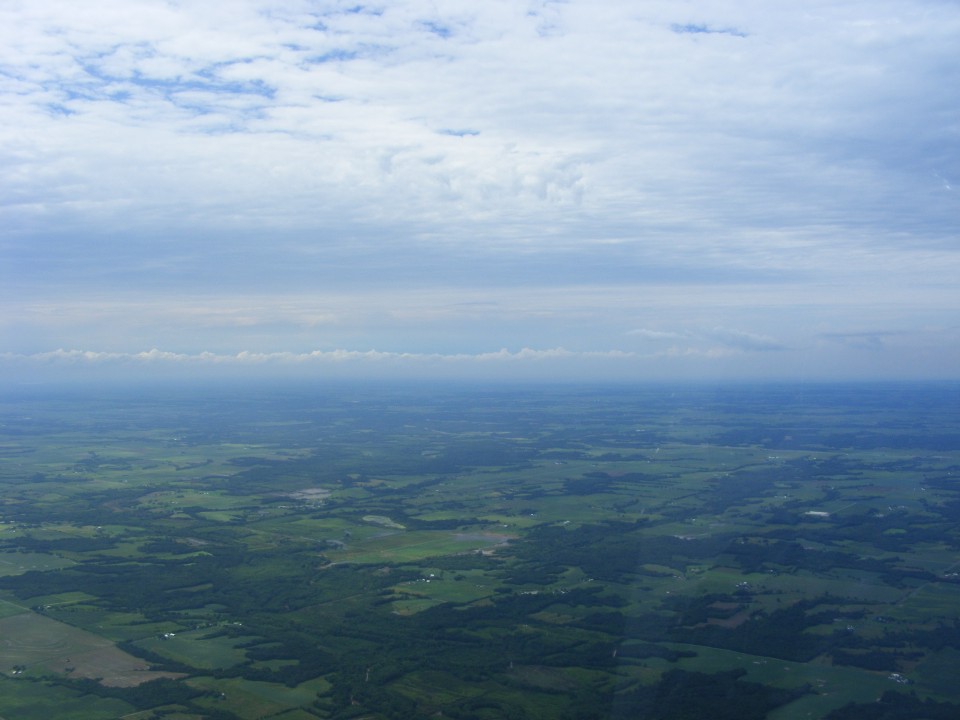 Here is the GPS ground track from Salem, Missouri to Galesburg, Illinois.   The deviation toward Hannibal, Missouri got us past the towering thunder storm across our intended route of flight from Saint Louis to Galesburg.