July 24, 2010: The facility below is along the Texas-Arkansas state line about 14 miles south of Texarkana.  Due to the hazy conditions below, most of the photos on this page have been enhanced for contrast and color.  We made a short video tape as we passed Texarkana.  It was during that video that Edward opened his water bottle with one of those push-to-close, pull-to-open caps like runners use.  He had forgotten the air pressure changes from ground level to 10,000 feet MSL.  He had a bit of water spraying upward like a fountain.  It was only a few drops, but it was funny.  It is just one more lesson about long-distance cross-country flying at 10,000 MSL and above in a light airplane. 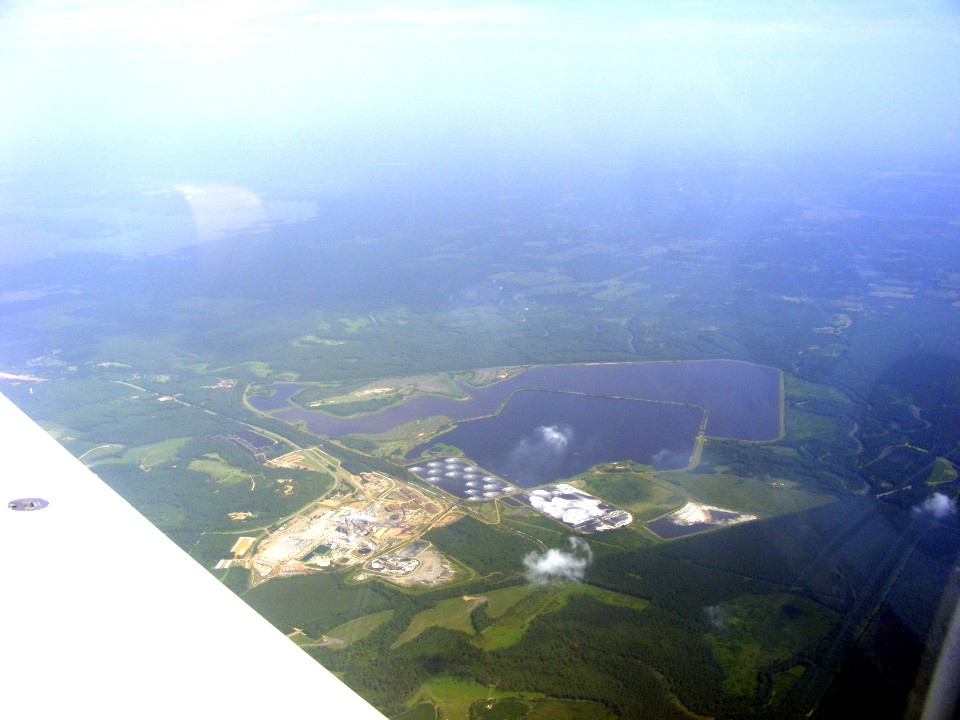 Edward took this photo just south of Daisy, Arkansas where the ridges run east/west and US 70 is down there somewhere.  The hazy air made the photos looking down at the ground less than optimum.  Regardless of the visibility conditions, we both like watching the landscape pass below the airplane at 160 MPH.  We had a small tailwind helping us toward our destination. 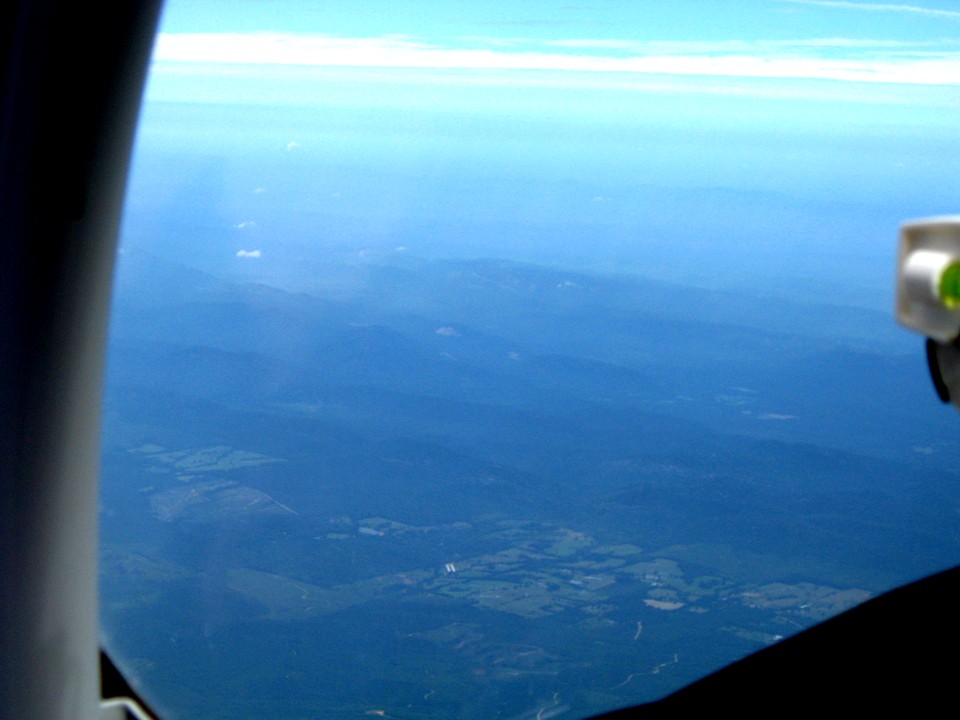 He took this photo about five minutes later northwest of Glenwood, Arkansas which is about 30 miles WSW of Hot Springs. 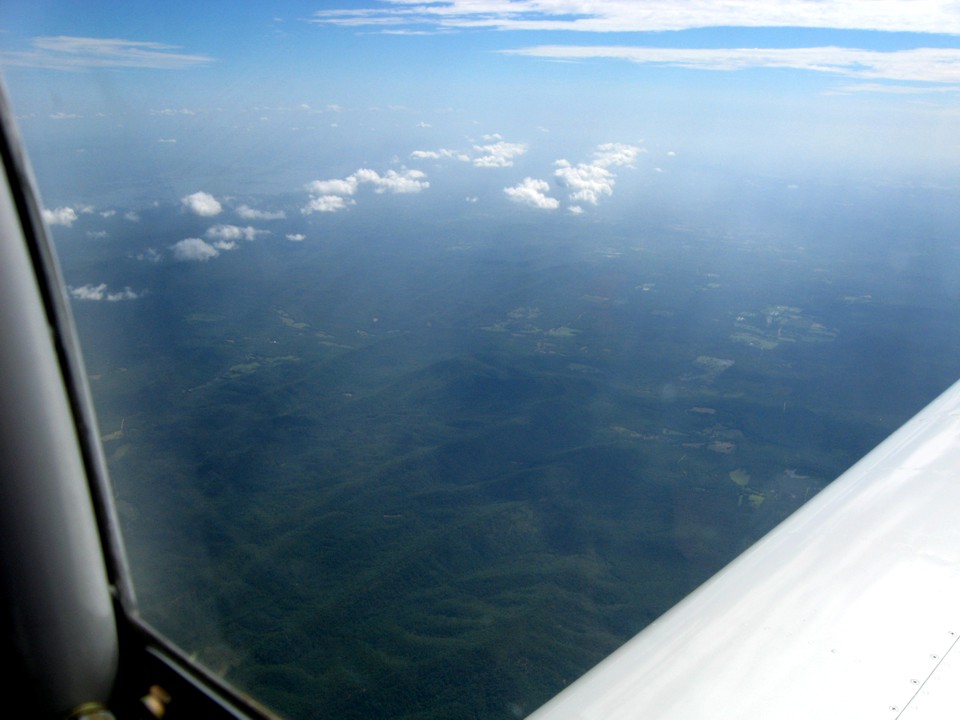 The path to the north is clear at this altitude as it is looking west as seen in these two photos.  That water ahead is all part of Lake Ouachita between Mount Ida at the west end and Mountain Pine, Arkansas at the east end of the lake.  That Indian word is pronounced as "wash-e-tah" by the locals.  I visited Mount Ida back in the late 1980's. 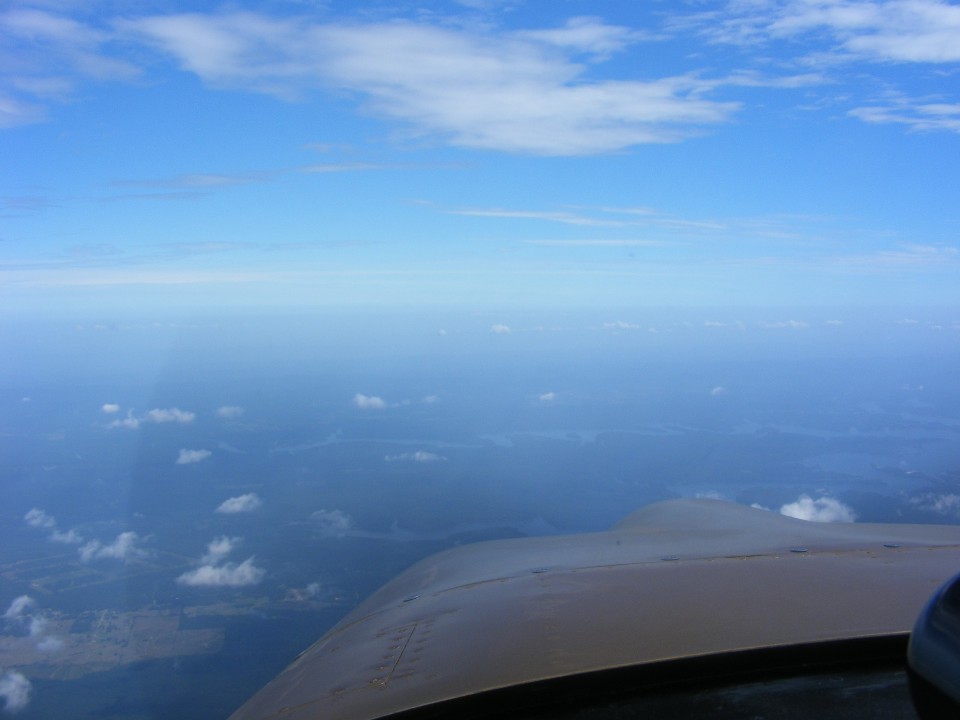 There is a big military operational area nearby to the west. 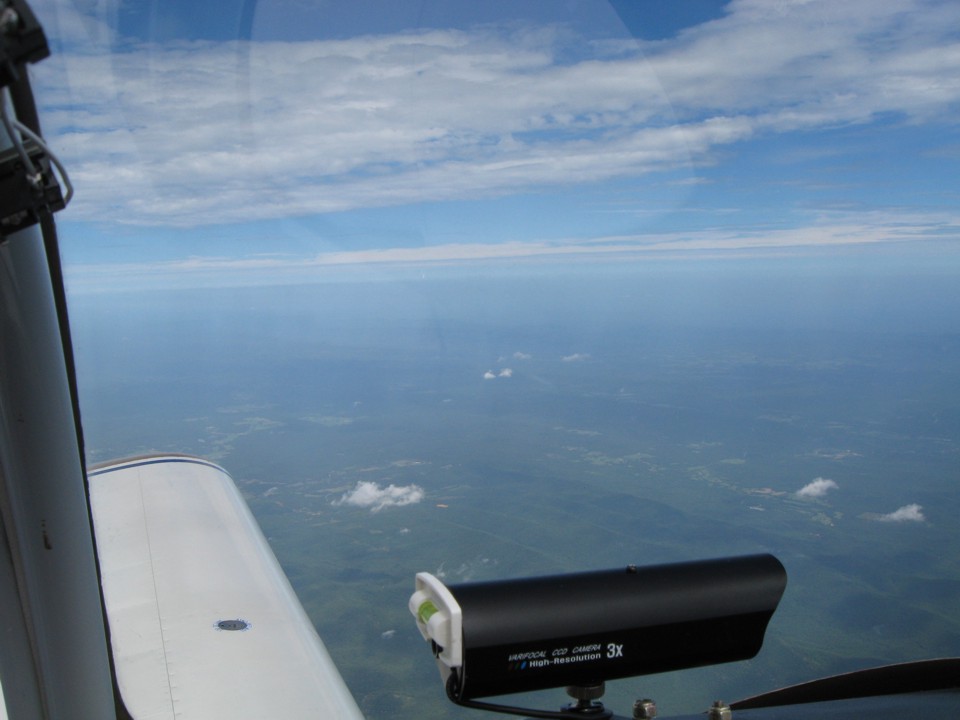 With both of us taking photos, I decided I needed this photo of my oldest son beside me. 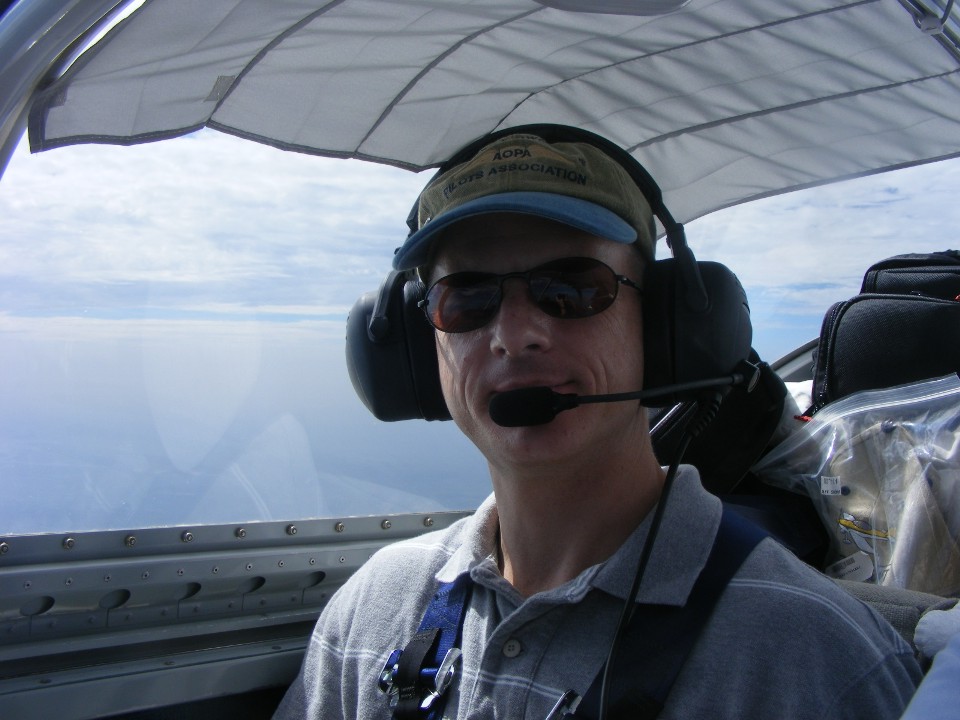 Edward sees the Arkansas River first as we approach the city of Russellville.   I told him how the folks in Kansas pronounce the name of this river as it passes through their state:  AR-KANS-US.  The head waters of this river begin near Leadville, Colorado in the Rocky Mountains.  The highest airport in the lower 48-states is located in Leadville.  Along the way, the river passes Pueblo and Lamar, Colorado.  In the state of Kansas, the towns of Cimarron, Dodge City, Great Bend, Hutchinson, Wichita, and Arkansas City are along the river banks.  Ponca City, Tulsa, and Muskogee are the Oklahoma cities before the river finally reaches Fort Smith, Arkansas at the west side of the state on the Oklahoma state line. 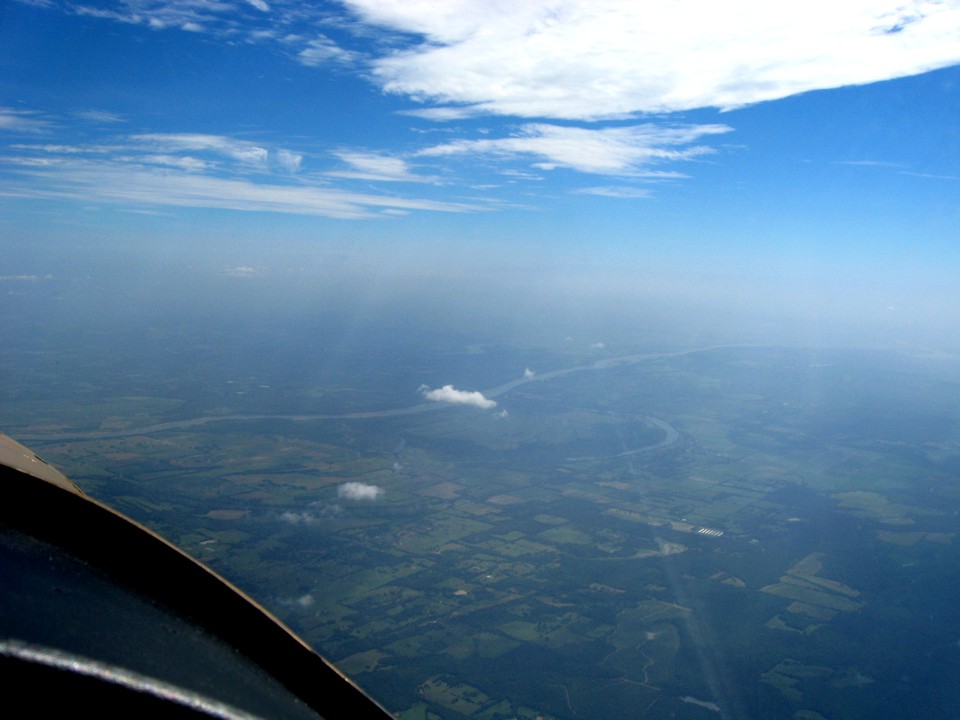 Much of the Arkansas River in Colorado and western Kansas runs parallel with US 50, which is the route from Ocean City, Maryland via Washington, DC, Cincinnati, Saint Louis, Kansas City, Pueblo, Colorado onward to Reno, Nevada, Sacramento, and San Francisco California before Interstate 80 wiped it off the maps.  It was truly an original coast-to-coast national highway before the interstate highways made them less relevant.   We will cross US 50 today at Saint Louis, Missouri.  We are about 75 miles due east of Fort Smith at this point in our flight.  Interstate 40 and US 64 are the roads running parallel to the river and a few miles north of it at the location below.   That little town on this side of the river is Dardanelle where state route 7 crosses the river northbound to Russellville, Arkansas. 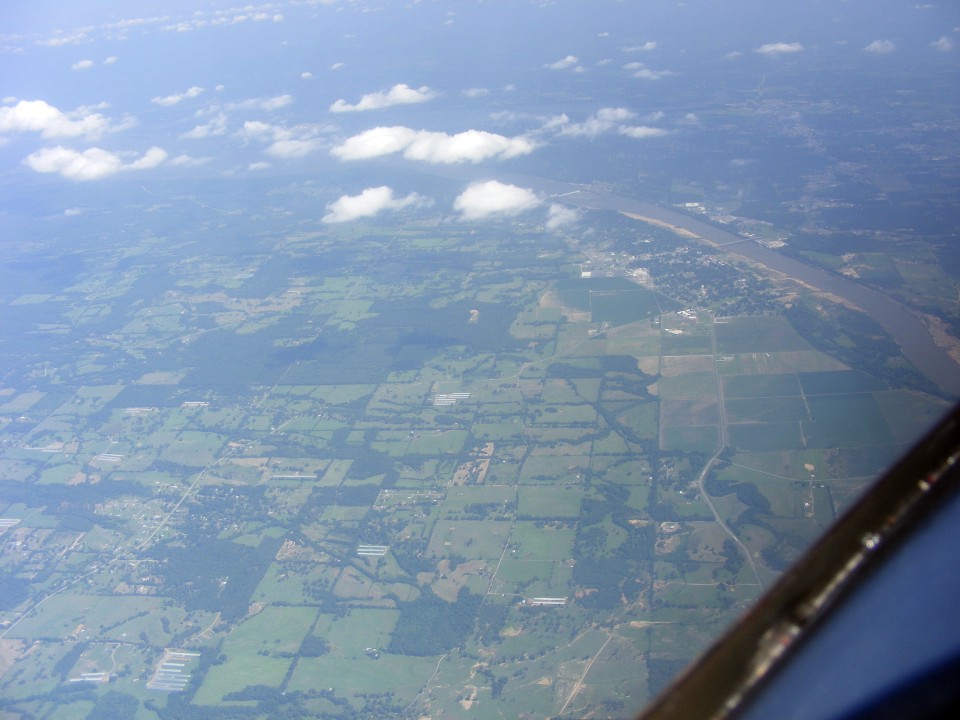 When I fly by myself, I find I take fewer photos.  With Edward beside me making new discoveries along the way, the cameras are getting more use today.  I have processed all the photos, but find myself choosing the ones with better stories behind them to make this ride interesting for those of you who don't get to travel by private airplane across our country.  That is the Buffalo River about 17 miles SW of Mountain Home, Arkansas.  It is the last photo Edward snapped before our next stop along our route to Oshkosh today. 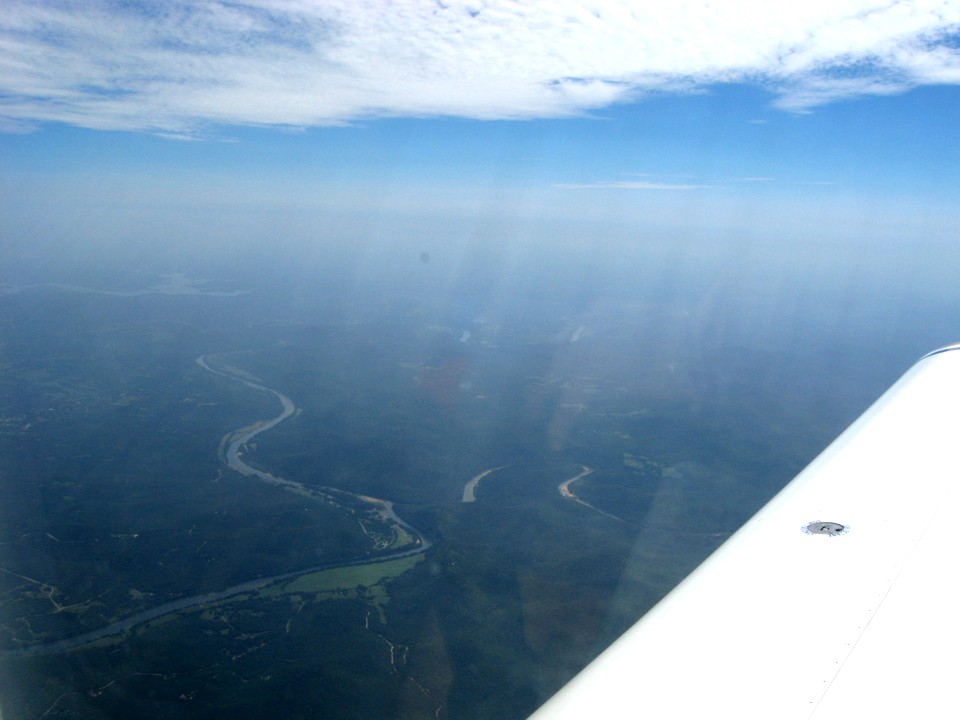 I have been keeping Edward busy with his pilotage and VOR navigation skills this morning by using his sectional navigation charts while looking out the window, and the VOR receiver to compare the signals to the radials from nearby VHF omni-range transmitters along and beside our route.  The map below has the southern end of the blue GPS ground track beginning at Henderson, Texas south of Longview, and ending at Salem, Missouri.

We made a rest stop at Salem, Missouri and ended up buying fuel again "just in case" we needed it for the next flight segment.  What we found when we landed was these facilities hidden from view when approaching from the south end of the runway as we did.  There is a large stand of trees to the south of the ramp, hangars, and the rest rooms seen here.  There were also two other RV airplanes here when we arrived.  The airport is un-attended and has self-serve 100 low-lead fuel available, common to many country airports.  I ate my sandwich I had packed for the flight.  This photo was taken at 2:31 PM Eastern Time (1:31 PM Central). 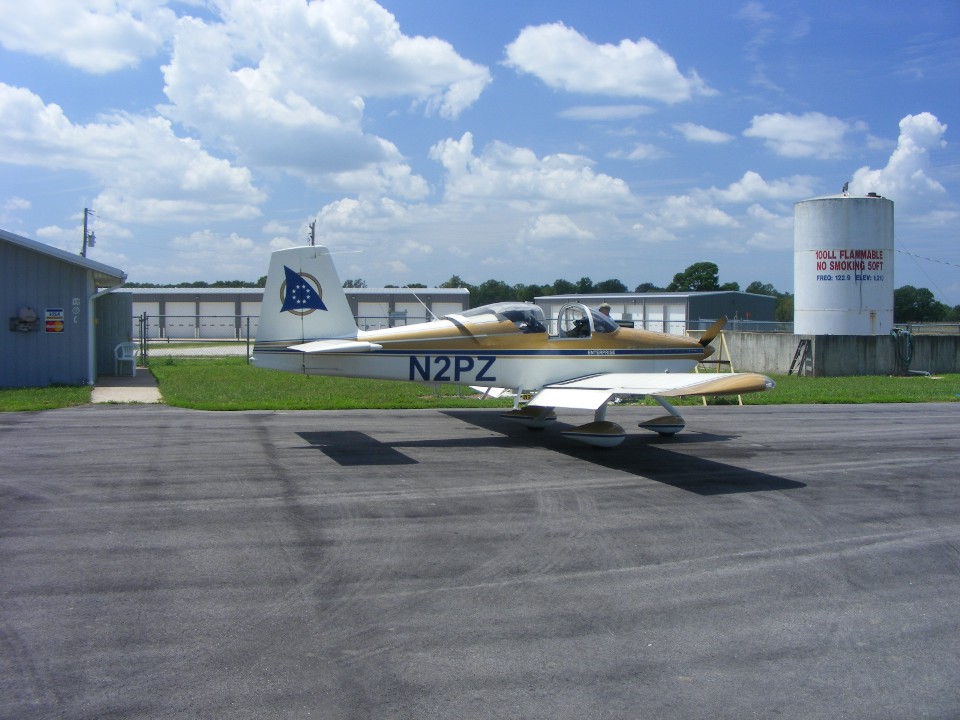 A car came driving up with the two RV pilots in it and another local pilot who had given them a ride into town to a restaurant for lunch.  We asked them if they were heading to Oshkosh, and they replied with "not today since the airport is closed!"  They told a story of their flight from the Dallas Fort Worth area to Salem and discovering much of the camp grounds at Oshkosh are muddy and flooded.   Airplanes are being diverted to Fond du Lac and Appleton, Wisconsin.  I called a friend already at Oshkosh and he confirmed those conditions in the regular camping area south of the main exhibit areas at Wittman Field in Oshkosh.

There is a mobile home at the Salem airport which is the office for a medical helicopter service.  We went in with the two RV pilots to ask the helicopter pilot if he had a computer with internet access.  He let us log on to the AirVenture web site to see for ourselves the latest reports of ground conditions in home built camping, our planned destination for this day.  The reports were grim, but improving since the rain at KOSH had stopped early in the day, this Saturday we were flying from Texas to Oshkosh.  The two RV pilots decided to return home and begin again tomorrow for Oshkosh.  They had not flown as far as we did today.  We had logged 4.2 hours of flying for about 700 miles of traveling.  That is about the time it takes me to fly from Chattanooga to Oshkosh as I did in 2005 and 2006.

At this point we are about 103 miles from the Saint Louis Arch and our next photo opportunity planned for this trip.  Edward briefly mentions the idea of returning to Georgetown and just having a weekend at home.  I talked about how conditions could change on the field at Oshkosh and how we could get our Arch fly-by done and get a room at Galesburg, Illinois.  I have been there on business a few years ago and it has a good general aviation airport.  I had planned KGBG airport as a waypoint on this trip after Saint Louis.  I called the Galesburg airport and spoke with the girl about their courtesy car and nearby motels and restaurants.  Edward and I agreed to fly there to spend the night.  It would give us a chance to rest far enough away from Oshkosh to be sure we could get a motel room and not have to sleep in the tent until we reach Oshkosh.

The decision was made, so let's go on to the next page to begin that part of the story.