August 20, 2004:  I had a visit from Robert Tugwell today.  He lives in the Nashville area as I had said in my Oshkosh 2004 pages.  Anyway, he wanted to see the differences between the RV-6A and the RV-9A canopy frame to aft top fuselage skin relationships.  He saw for himself what I had surmised after seeing his airplane with the original mod kit installed.  So he climbed inside my baggage area and I closed the canopy for him to see what was going on close up and personal.  He had done this in his RV-6A when he first designed the cable kit.  He noticed that there is indeed more room in the RV-9A (yaaayyy!).   He took this picture of the way that I had rigged the system to work after my earlier failure. 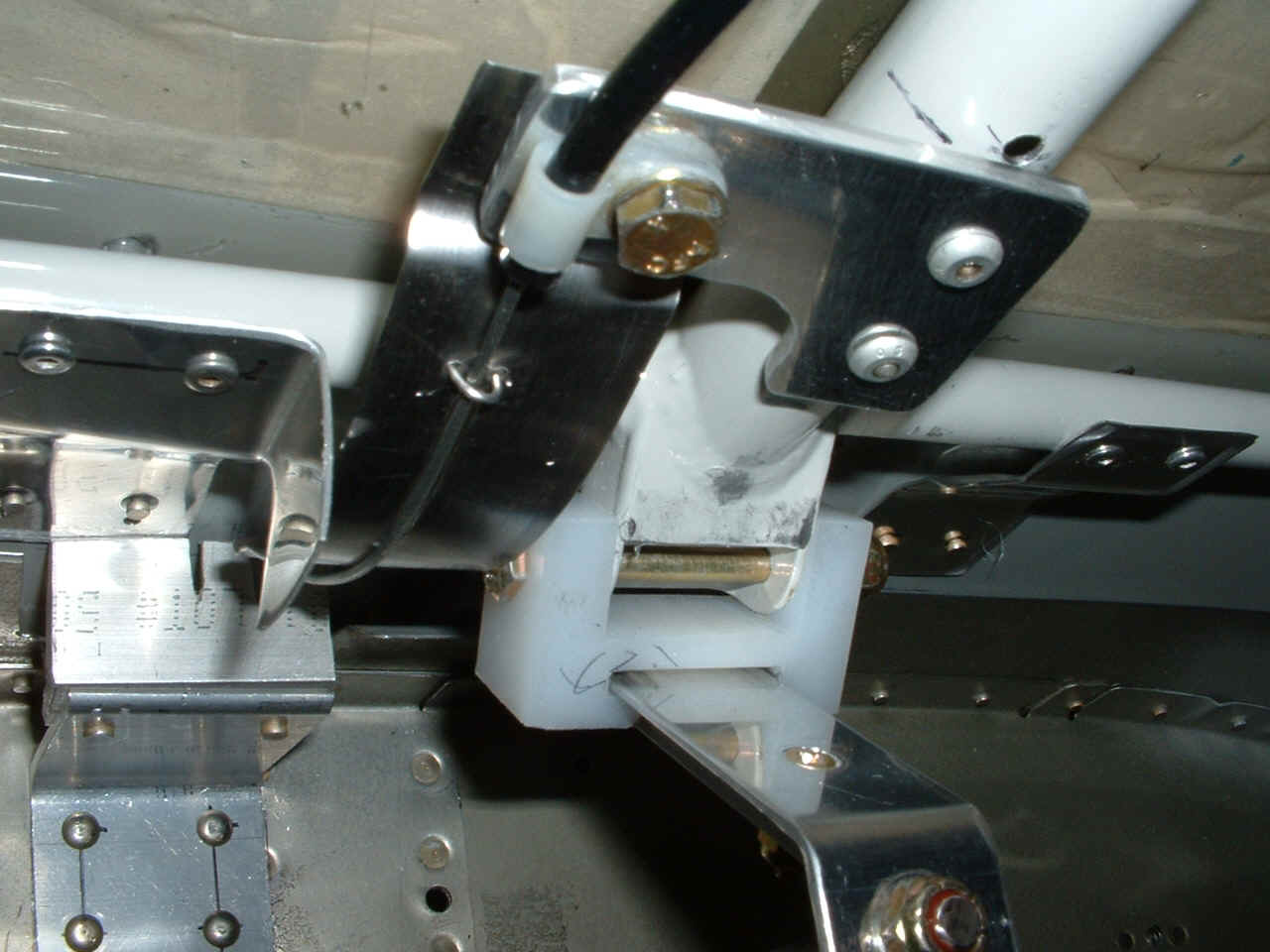 Next was this shot showing the alignment of the cable with the "near slot" in the bulkhead angle brace as the canopy is closing. 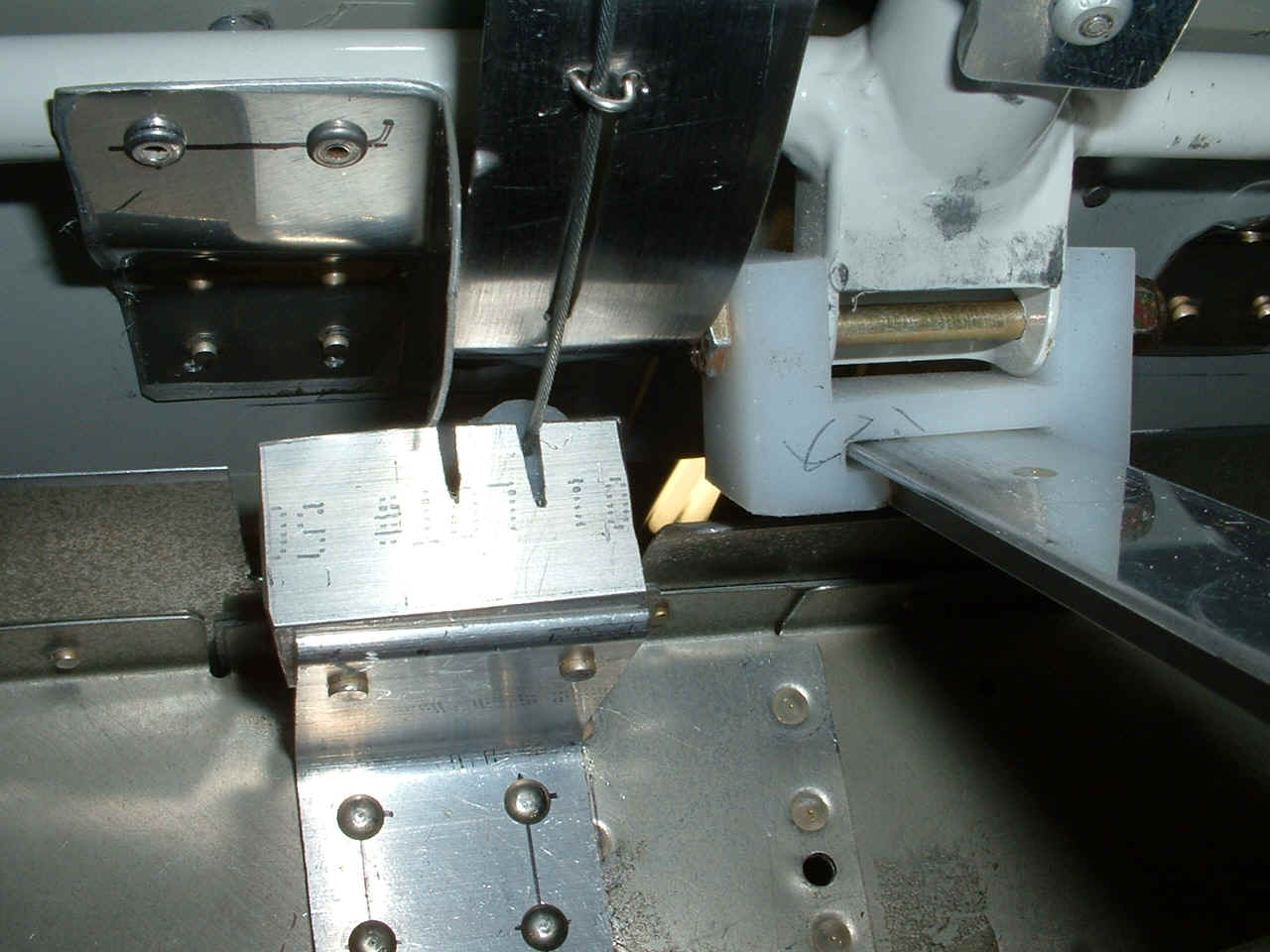 Then this shot shows the cable entering the "near slot" and the length of the stainless steel strap in relation to the angle bracket attached to the baggage bulkhead.  It is a pretty good shot of my aft canopy skirt bracket that also serves to keep the stainless steel strap aligned over the "near slot" and all that...   Notice that this is the original black cable sheath in the white nylon clamp at the right side of the photo and the "L-bracket" is still in the original "RV-6" installation position.   And my bent tab clears the angle every time the canopy opens and closes. 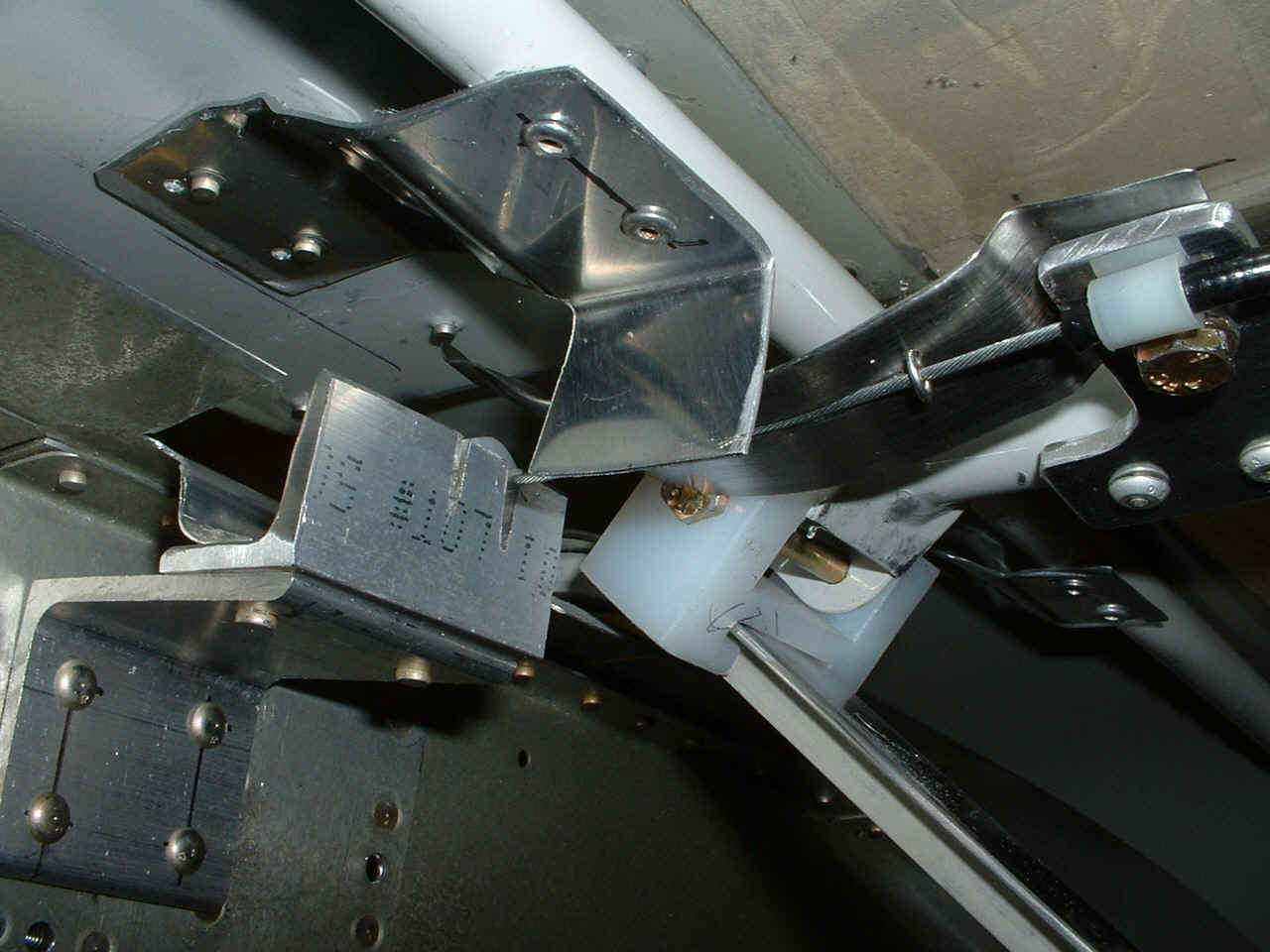 In this shot the canopy is nearly closed all the way down, but not quite.   He was interested in the position of the end of the stainless steel strap near the angle with the "near slot" in it and the way the cable rests in the slot. 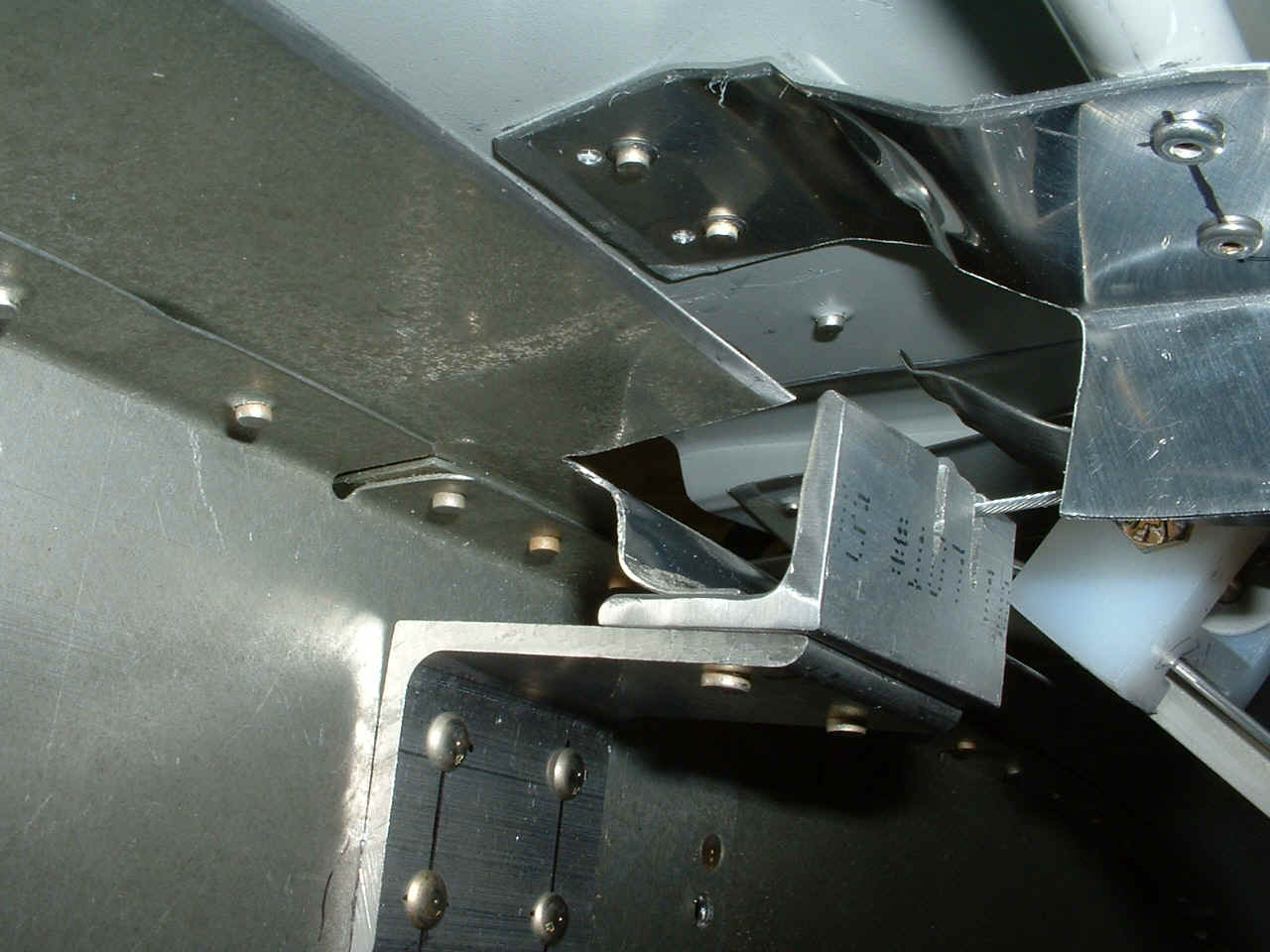 Now this photo shows a measurement regarding the canopy frame tube and the placement of the "L-tab" that secures the black cable sheath".   Remember on my previous "fixed page" I talked about how the tab needs to be as far aft as possible and with the tab flipped over to get the cable sheath as close to possible to the slot in the angle when the canopy slides closed. 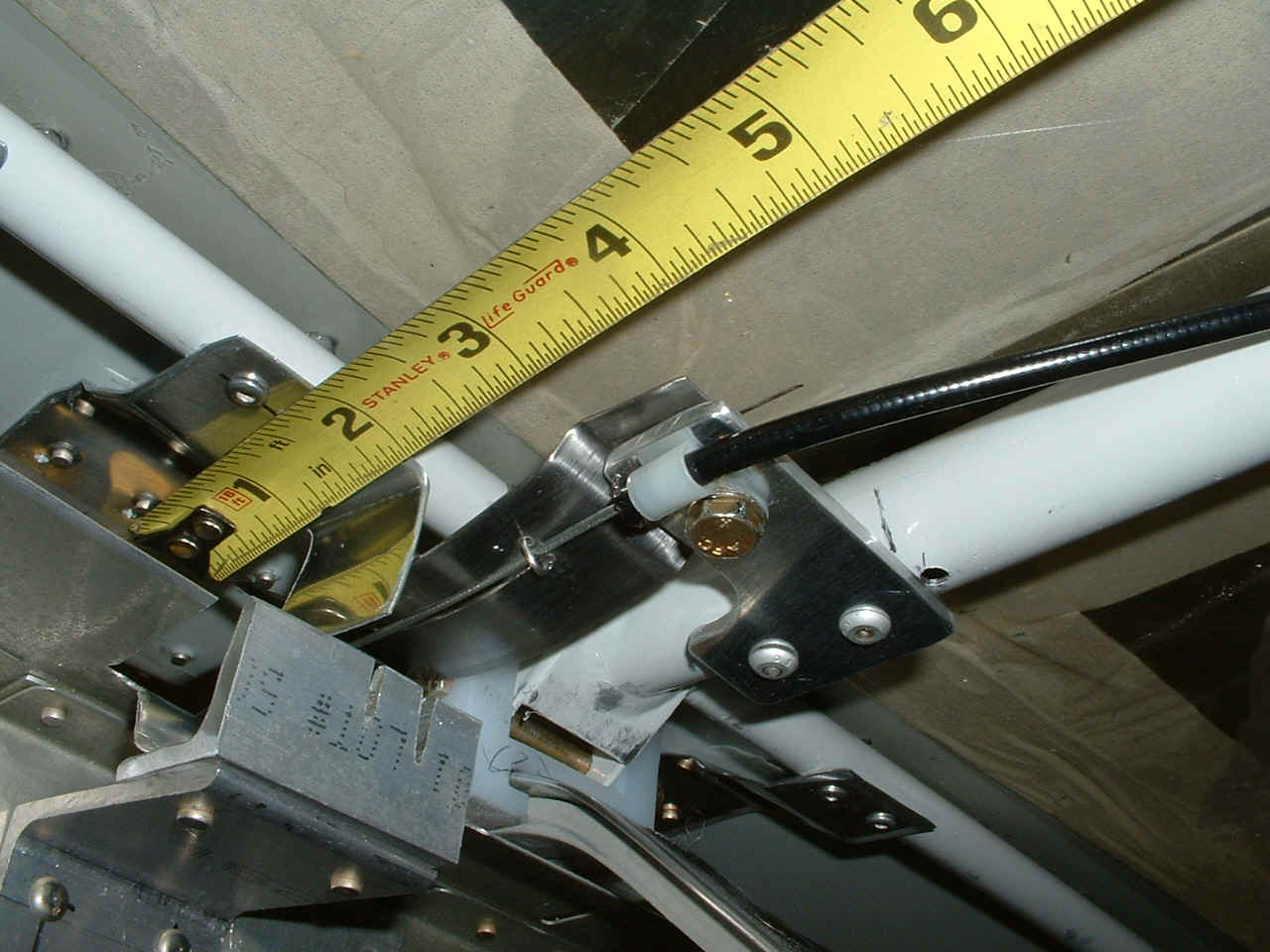 During the time we were "messing with this version of the fix" that I had put in place, you know what happened?  We broke it.  Bent the steel cable like a pretzel and that ruins the alignment of the cable and slot thing.  At that point Robert goes out to his car and brings in a new cable assembly.  During this time we decided to find out why the cable set-screw block was slapping the canopy frame near the latch handle.  I kept some stress on the cable while he turned the handle.   Having the Meske canopy tip-up modification made this part of the testing a breeze.   We finally decided that the "SNAP" was occuring when the tension from the cable on the set-screw block was making it jump over the bronze washer that is on the latch handle shaft.  (While I had the cable assembly removed later, I rounded off the bottom edge of the set-screw block on the side that goes up against the bronze washer.   That was the end of the snapping noise.)

It is getting late for him to get home at a reasonable hour -- so I call a halt to the proceedings we both head for Burger King for the new Angus Burger with Bacon and Cheese.  We talked a bit about jobs, planes, and all that stuff that RV-builders like to discuss.  He offered me a few extra spare parts and I paid him for the modification kit knowing just how I was going to repair our SNAFU when I returned home and he got on the road back to Nashville.

And here is the result of my repairs.  I took out the old short black cable sheath (Robert had another word for it, but I did not write it down.  I drilled out the big Cherry Max #5 pop-rivets and relocated the "L-tab" as I had discussed earlier and drilled ONE new hole, using the previous "aft hole" from the first installation.  I re-used my old cable after straightening it out while it was out of the assembly.  I even re-used my previous stainless steel strap, but in a slightly different way.  This time the safety wire "wicket" is holding the black cable sheath as far back as I dared to go and still clear the angle with the slot in it when the canopy opens and closes.  Remember that black line I drew with the Sharpie pen?  There it is at the end of the stainless steel strap, still marking the overlap of the aft canopy skirt with the leading edge of the fuselage skin that extends forward of the baggage bulkhead.  I was standing in the baggage area on a wide board taking this shot about 12 inches from the cable and strap. 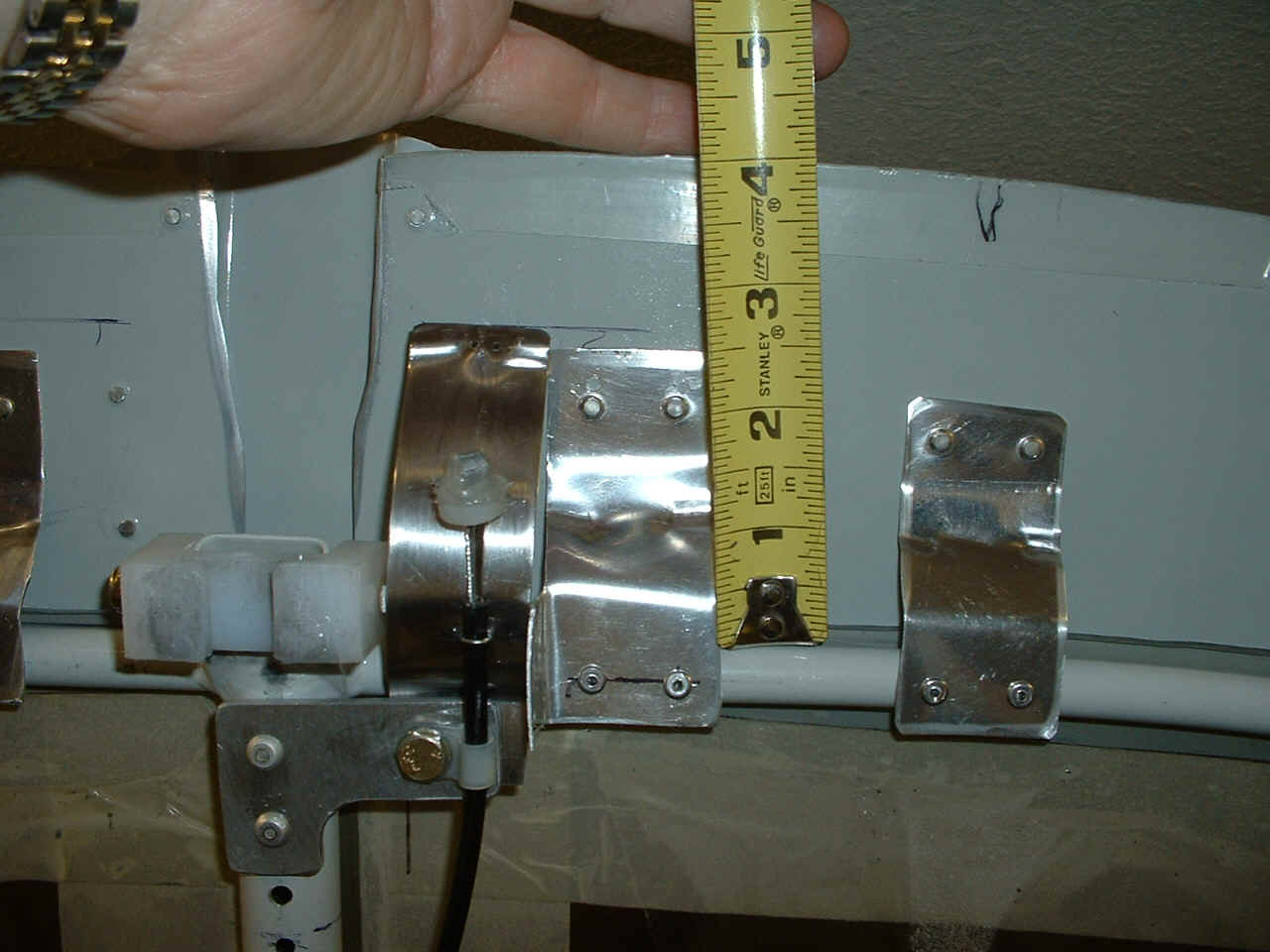 Here is a wider shot of the assembly with me standing on the floor and zoomed in a bit.  In this photo, you can clearly see that orientation and placement of the "L-tab" is near the aft canopy frame tubes that are riveted to the plexiglass and the aft canopy skirts.  You can also see that in all the man-handling of the cable that the RTV has let go of the UHMW disk. 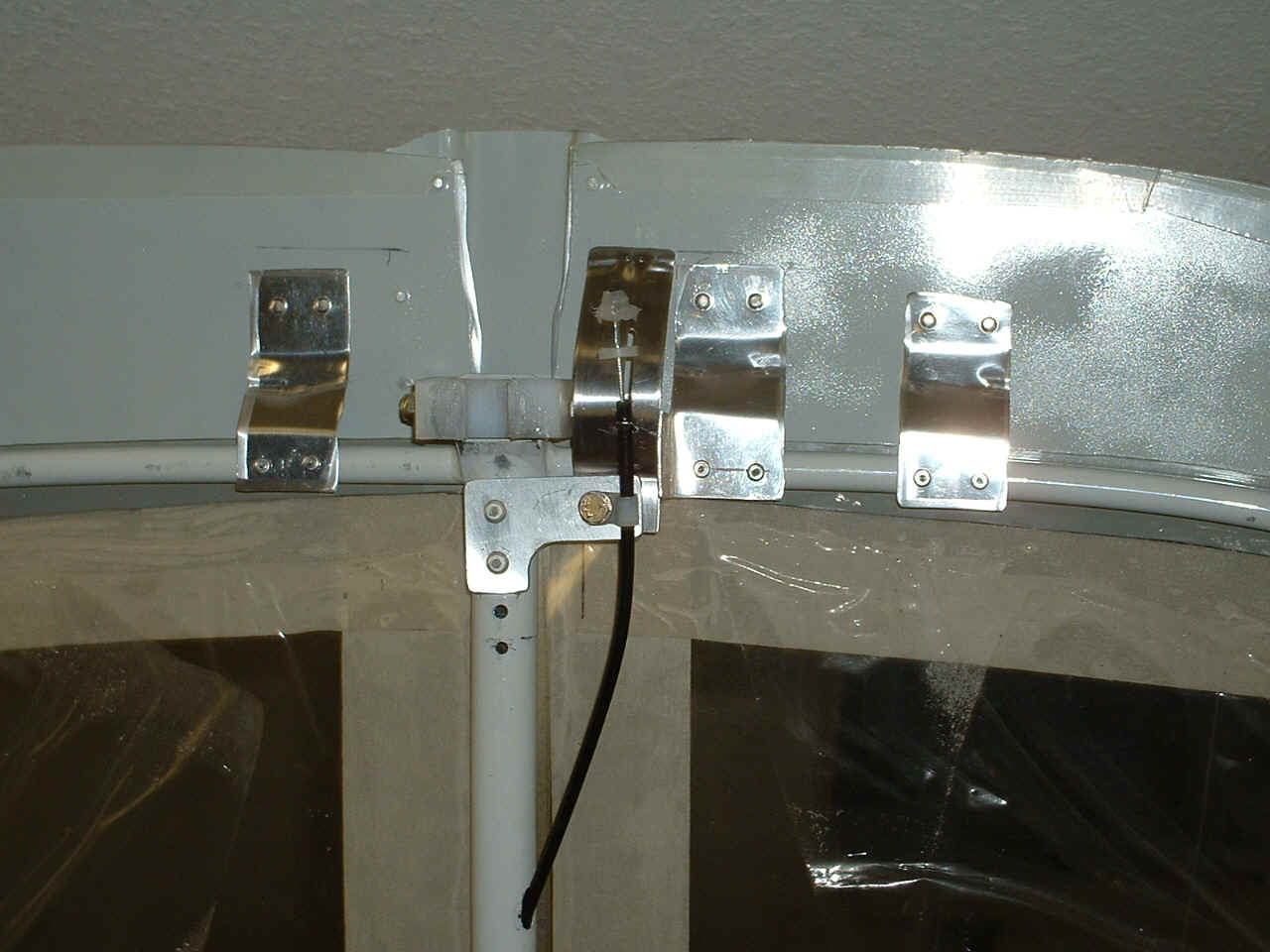 Last shot for this page is showing a little more detail and less reflected flash.  The steel cable no longer rides in the slot, so don't bother cutting it in the strap.  But note the location of the two 1/16" holes and the safety wire "wicket" that keeps the black cable sheath on track toward the slot in the angle, etc.  At this location of the "L-tab" on the canopy frame center tube, the stainless steel strap is "UNDER" the head of the bolt that holds the slider block to the frame. 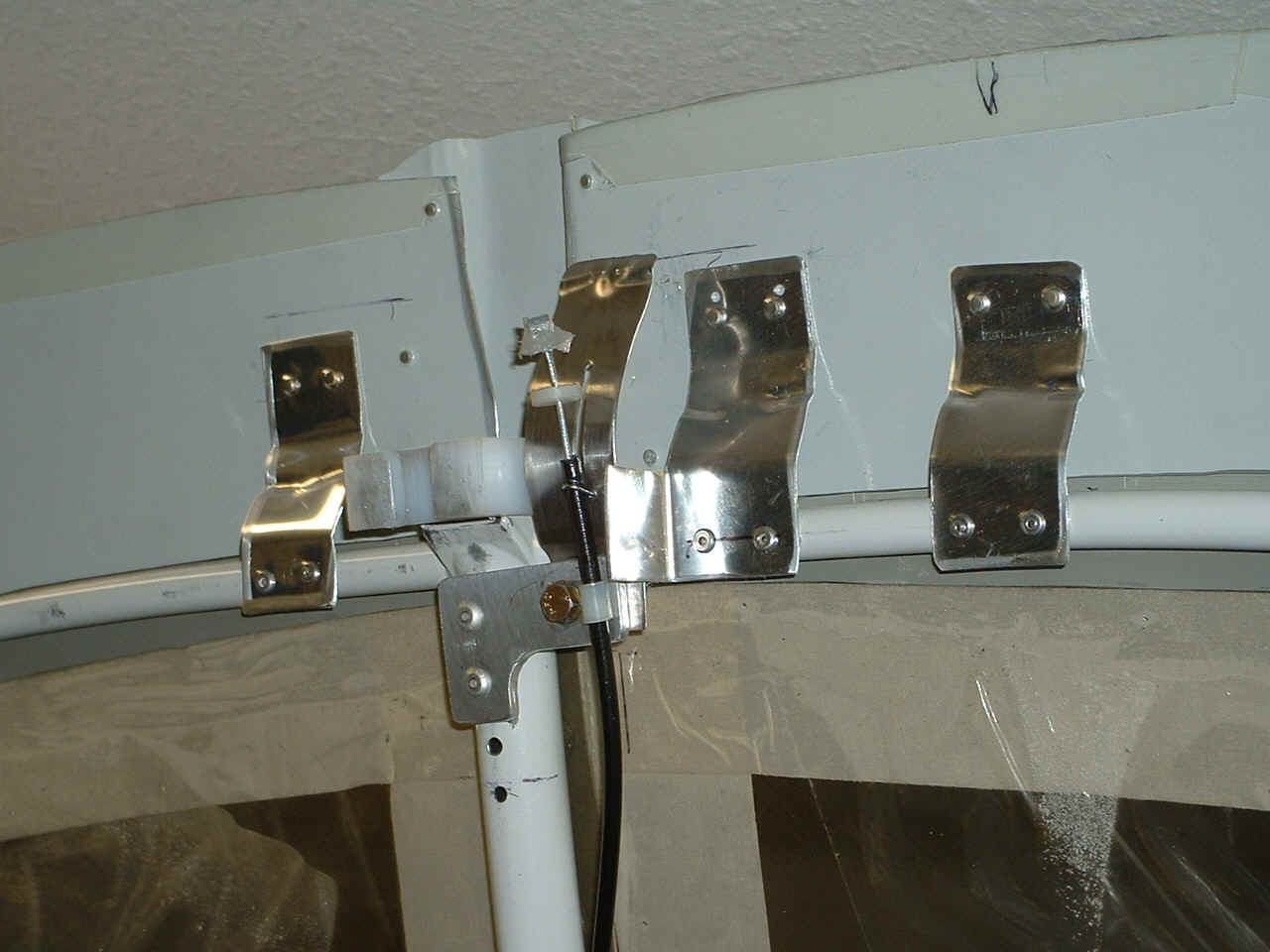 CLICK HERE for Tugwell canopy mod page 4 (the last one, I hope!)