July 27, 2019: This is one of the big days of our trip to the mid-western states.  Linda took most of the photos on this page.  I put the YELLOW identification notes on them in post processing of the images.

The XB-70 Valkyrie dominates the view as you enter the NEW hangar which has research airplanes and other types with many good exhibits as you will see on this page.  This hangar has some ONE-of-a-Kind aircraft from experimental tests of new designs.  The P-59 was a secret project that began in 1942, well before the end of World War II.  Read this article to get plenty of information on the Bell P-59. 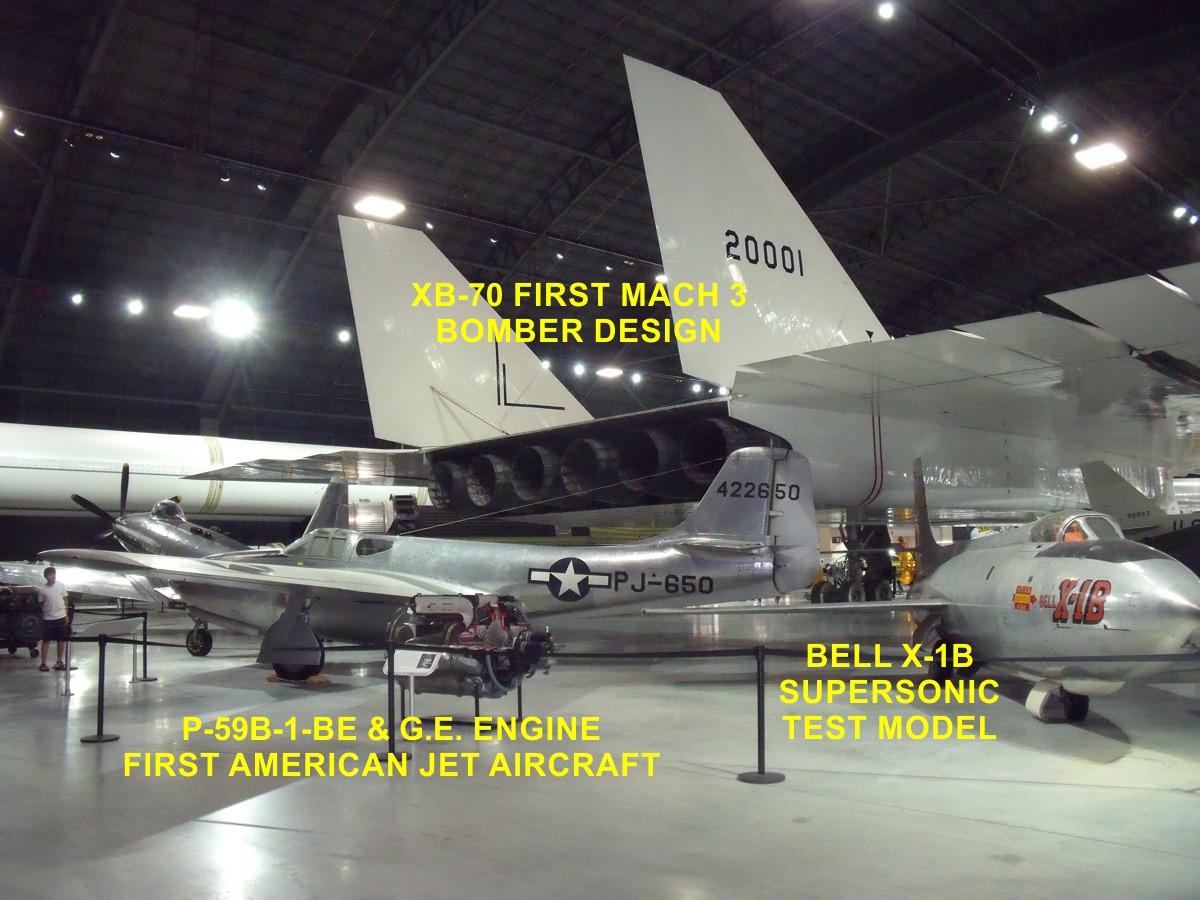 The other interesting airplane in the photo above is also made by Bell Aircraft.  It was the second supersonic X-plane designed to fly faster than the speed of sound.  The Bell X-1 was flown by Air Force Ace fighter pilot Chuck Yeager in 1947 as the first rocket-powered aircraft to exceed the speed of sound.  That one hangs in the National Air and Space Museum in Washington, DC.  This web page on the USAF Museum site is about this Bell X-1B.

The jet engine below is one of SIX that were used on the XB-70 Valkyrie.  https://en.wikipedia.org/wiki/North_American_XB-70_Valkyrie 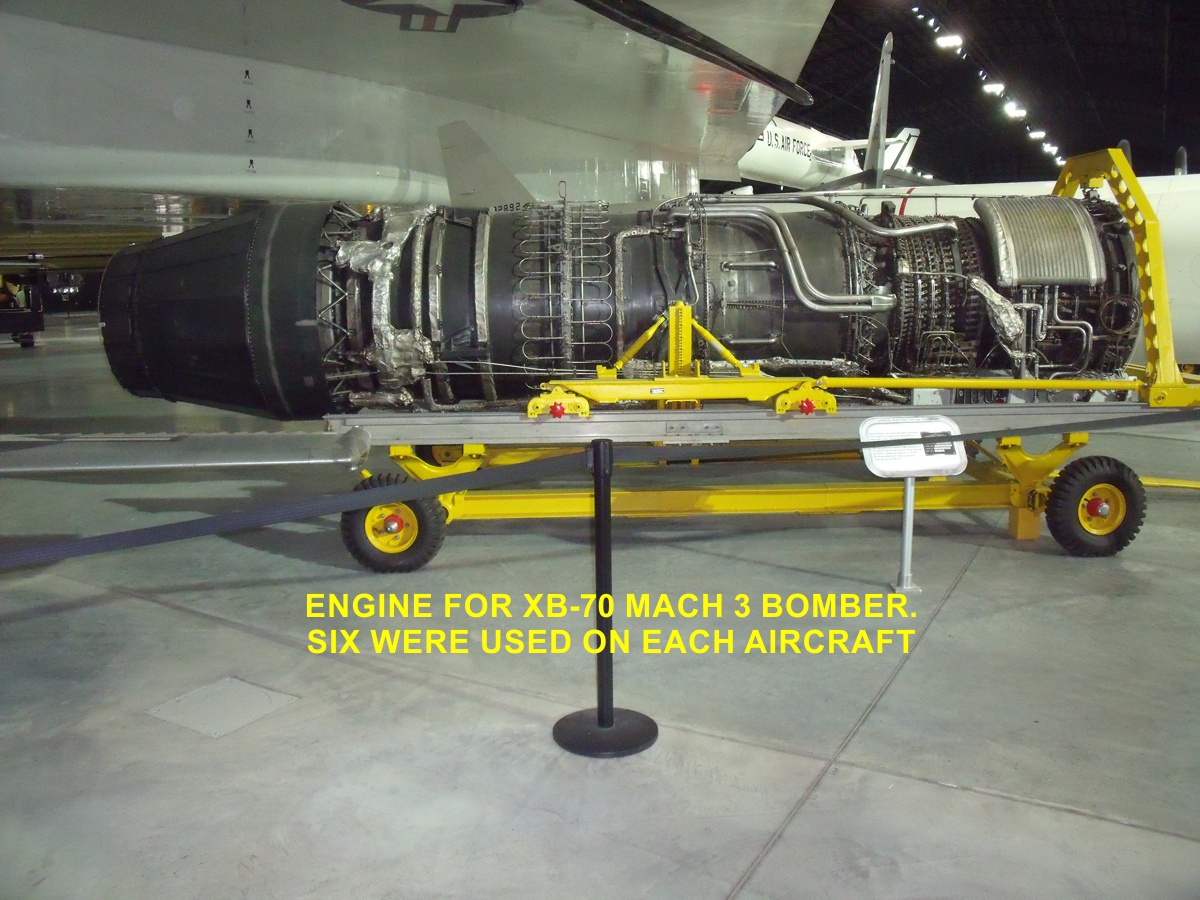 The airplane pointed at the camera with two jet engine intakes is the Douglas X-3 Stiletto.  It was the first X-plane to use titanium in its structure.  The wing type was the best feature and adopted by the Lockheed Skunk Works in the design of the F-104 mach 2 fighter jet.  The XF-85 Goblin was an attempt to give fighter support for the big and slow B-36 long-range bomber.  The Goblin was designed to be carried in the B-36 bomb bay and deployed to defend against enemy fighters.  This hangar features mostly experimental aircraft and that is why the Goblin is located here with other X-planes, not with the B-36 in the other gallery next door.. 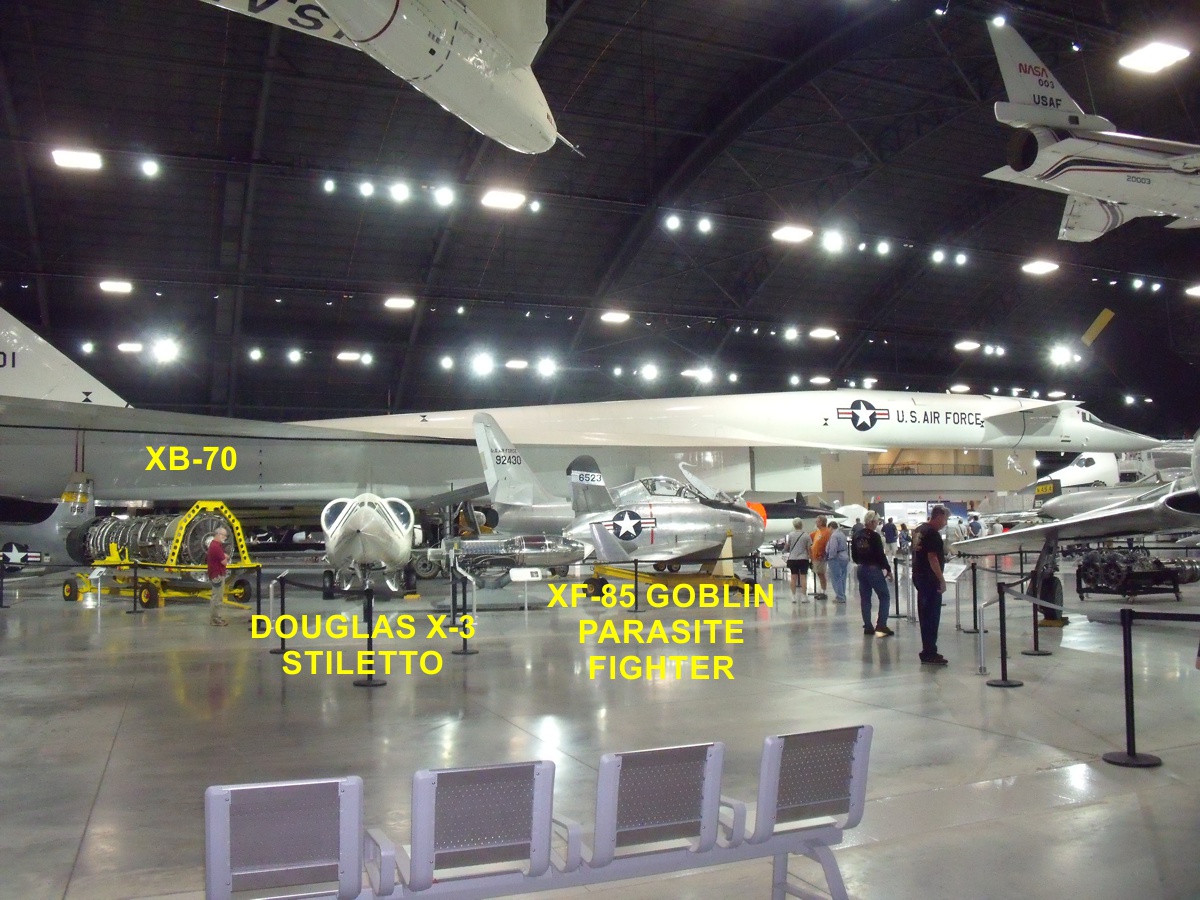 Here is my first picture of the XB-70 Valkyrie below which includes Linda at the bottom right corner of the photo.  When the XB-70 flew at mach 3, the paint came off from the heating of the skin.  The airplane in the upper right corner of this photo is the X-29A which was built from an F-5A freedom fighter fuselage parts and F-16 main landing gear. The forward swept wings were intended to give better agility in air-to-air combat. 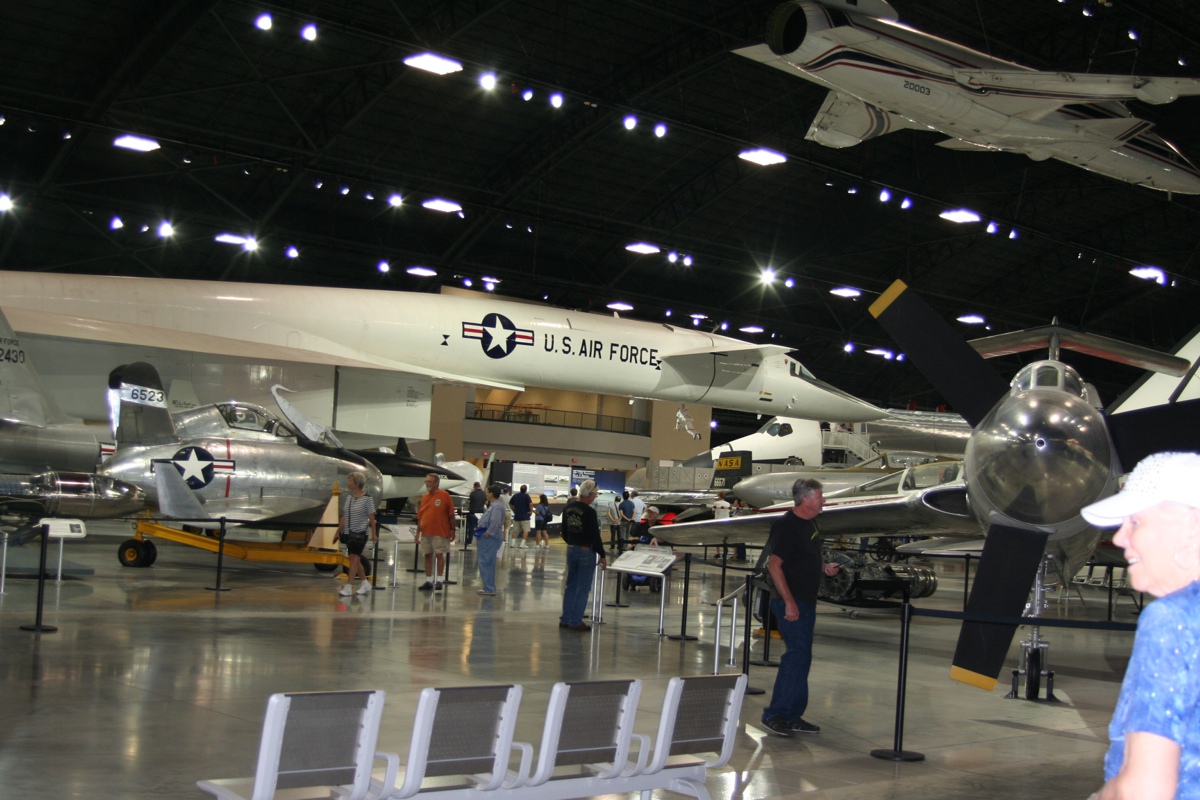 My second XB-70 image shows the tail section.  Do not think that big rocket engine nozzle behind and further away is part of the X-B70.  That rocket is displayed on it side for close-up views over on that side of the hangar. 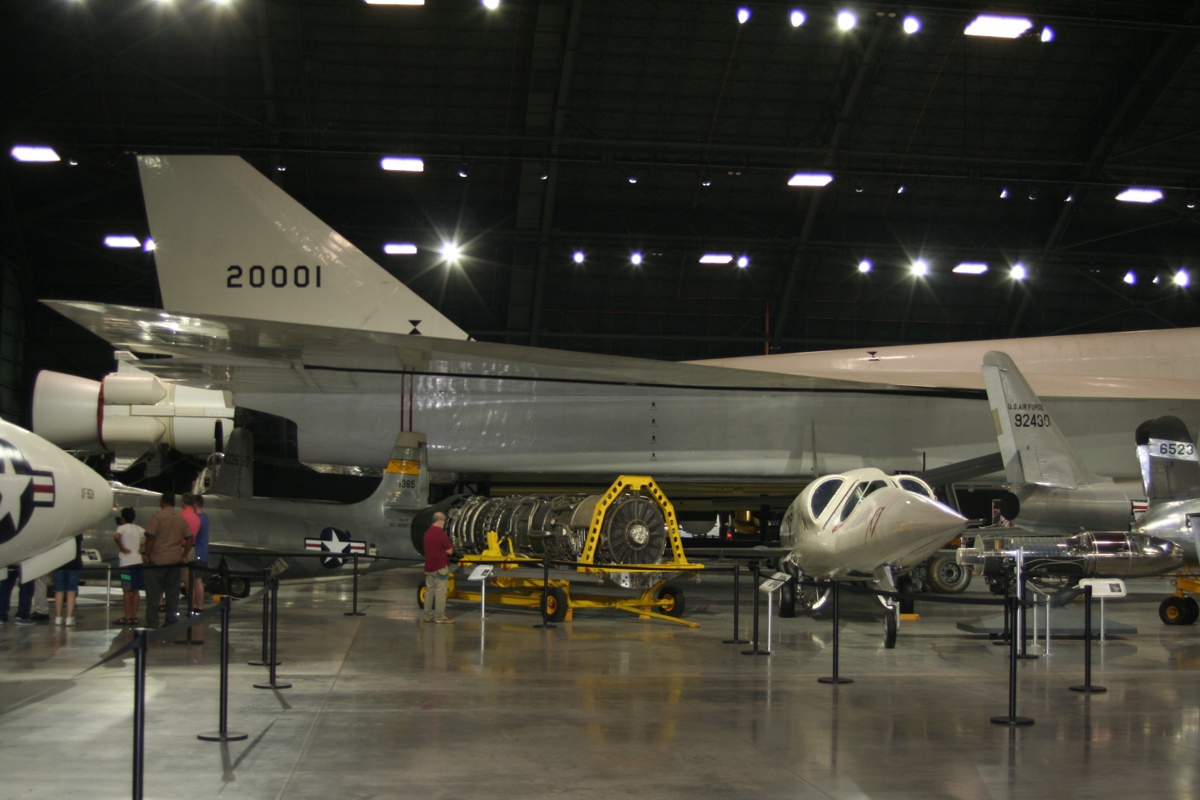 Linda took this photo of a large sign about the XB-70 Valkyrie.  This sign is on the other side of the Valkyrie facing the aircraft.  The image also shows one of the lifting body gliders used to develop the concept of the Shuttle landings at the left side of the photo.  One of those rockets displayed horizontally is also partially visible beyond the lifting body. 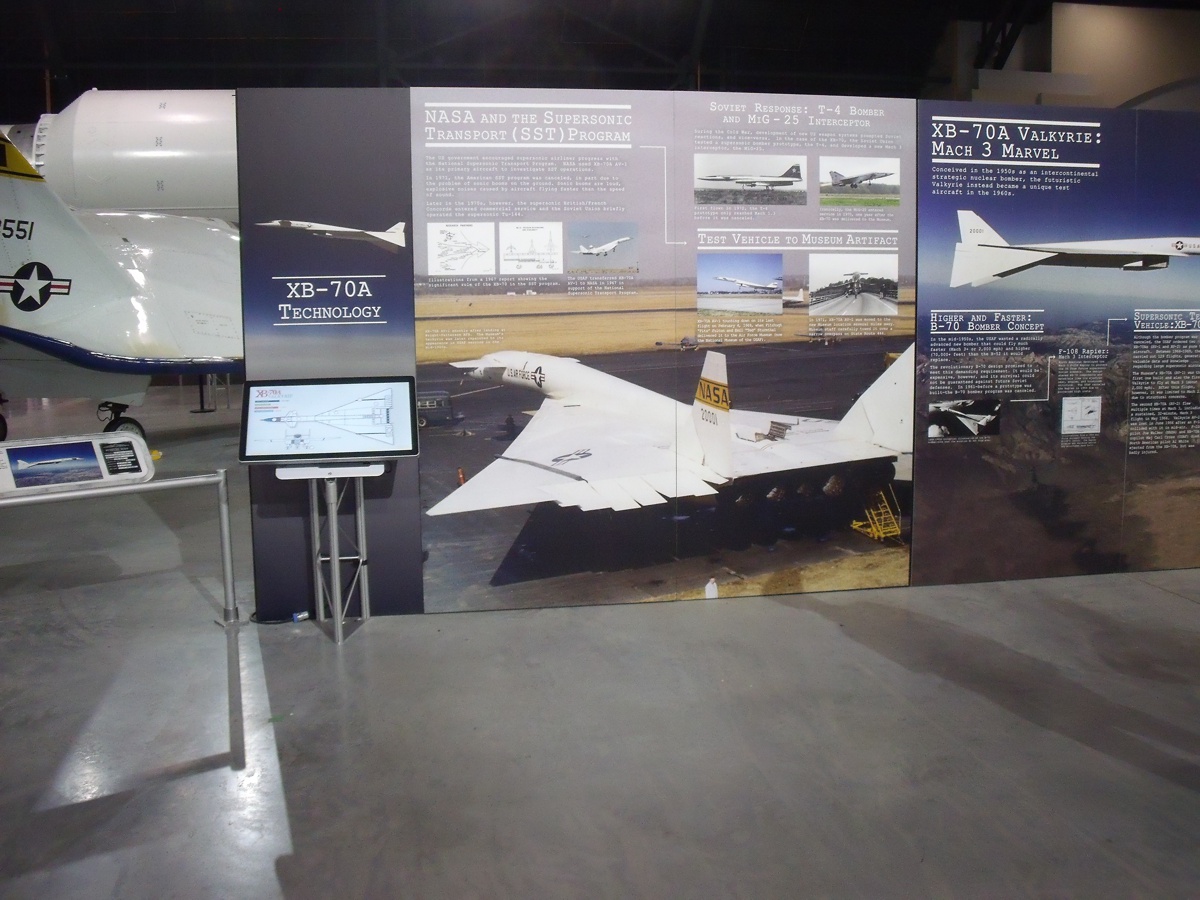 This image taken from the mezzanine shows a couple of lifting body experimental research vehicles. 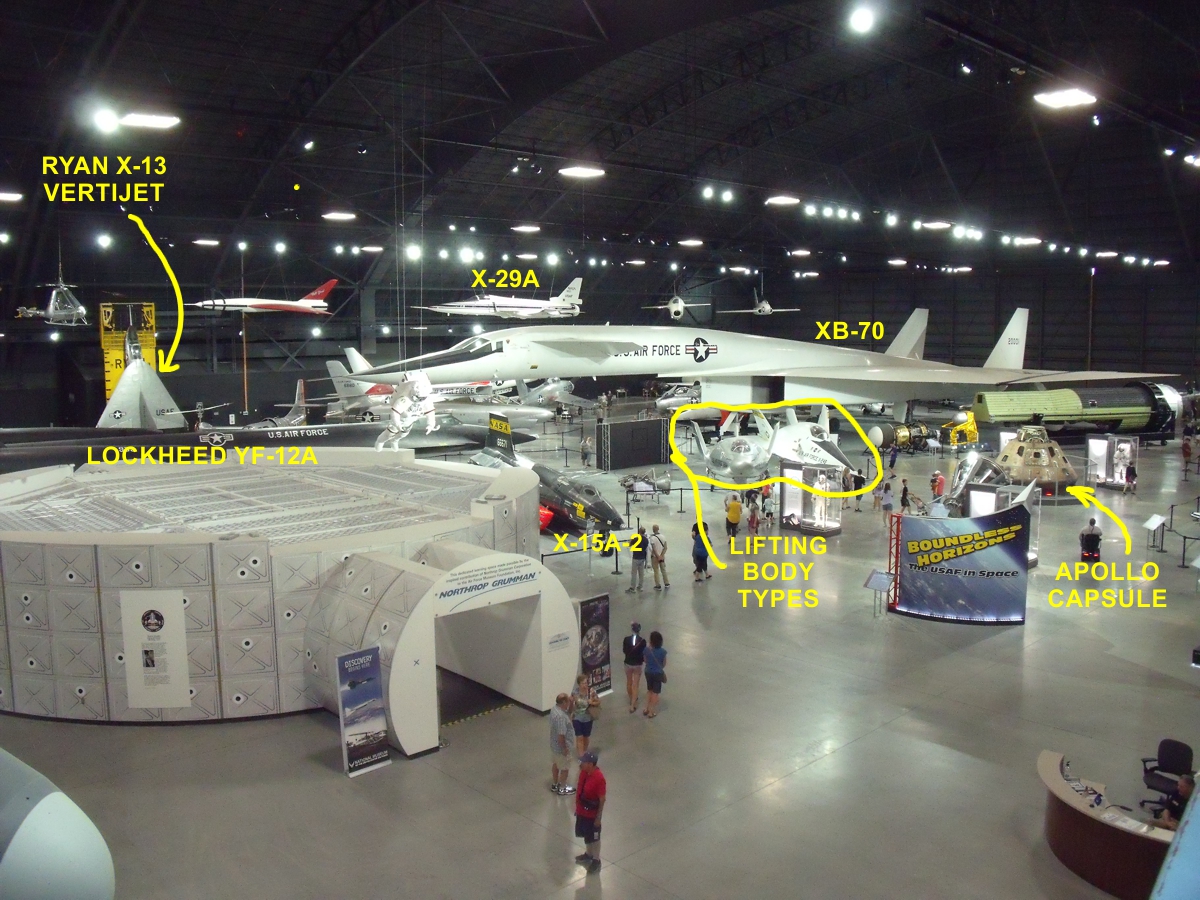 Here are two more views of the XB-70 Valkyrie and surrounding exhibits.  The X-29 is seen in full profile above and just beyond the Valkyrie. 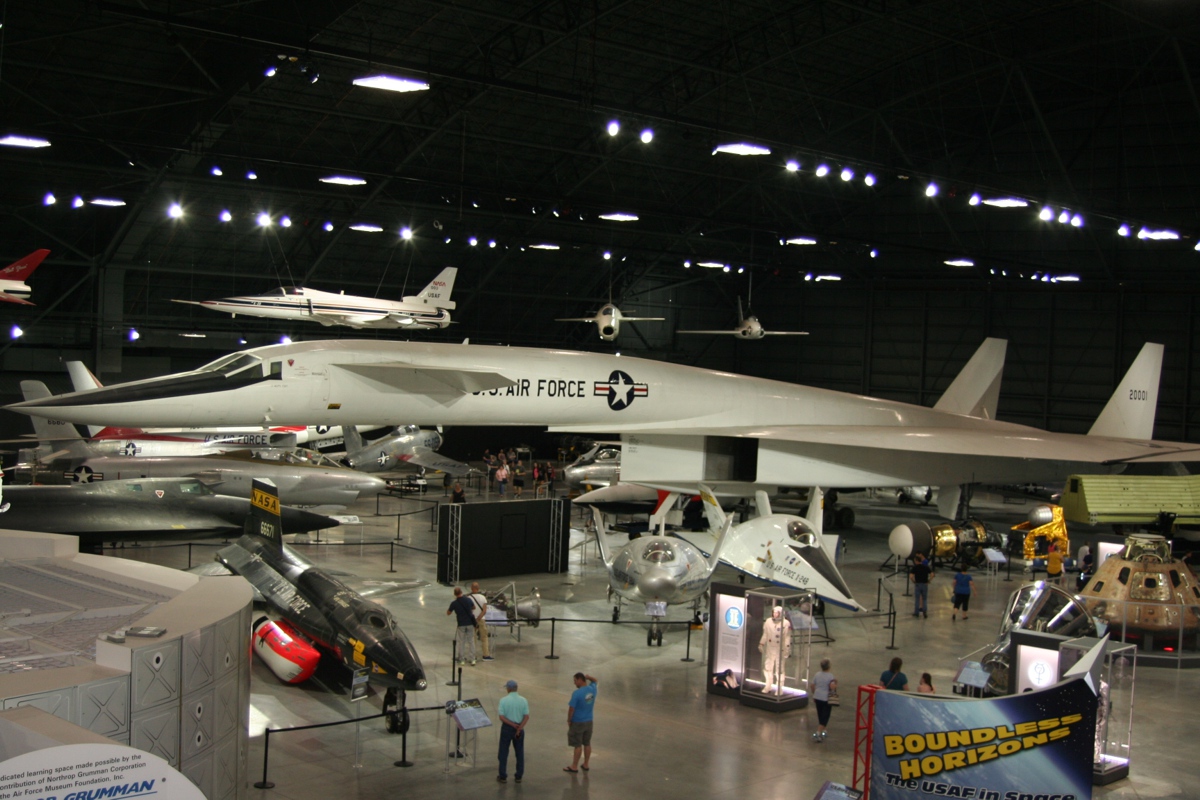 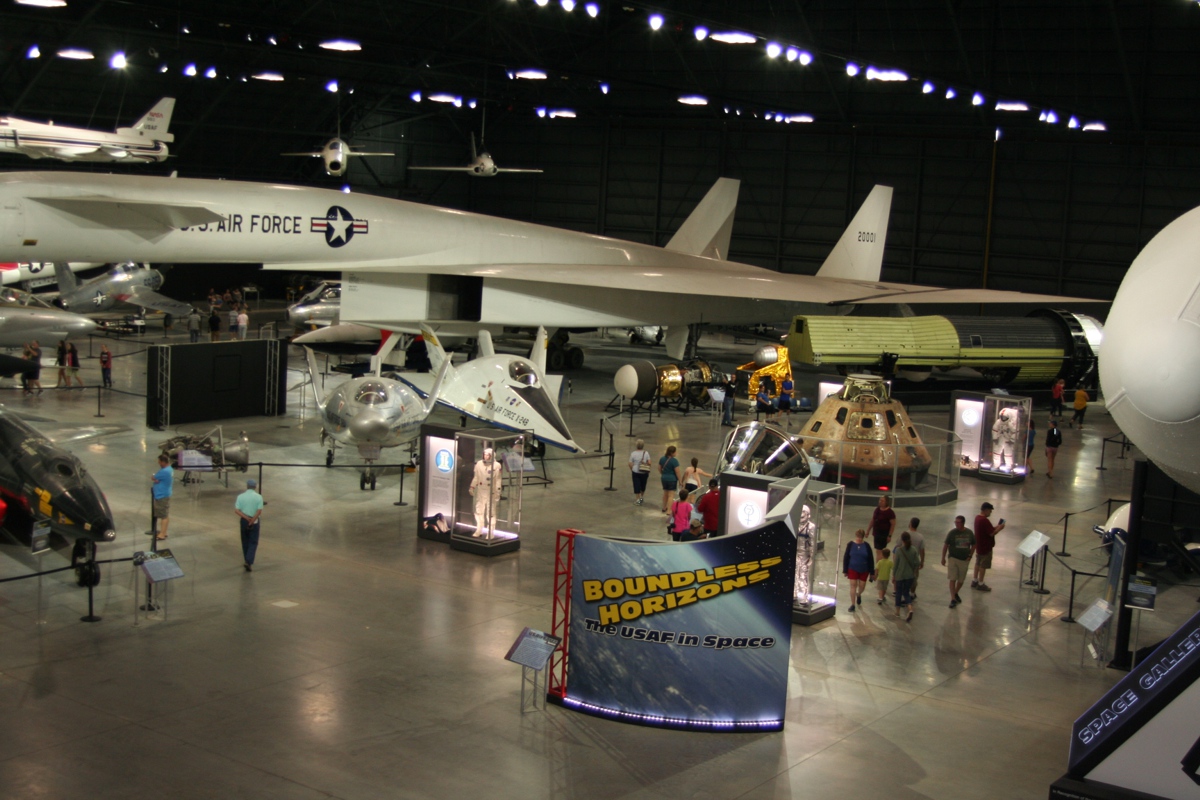 Here is a better view of the YF-12A which was developed before the SR-71.  More information about this series of Lockheed aircraft is found on Wikipedia. 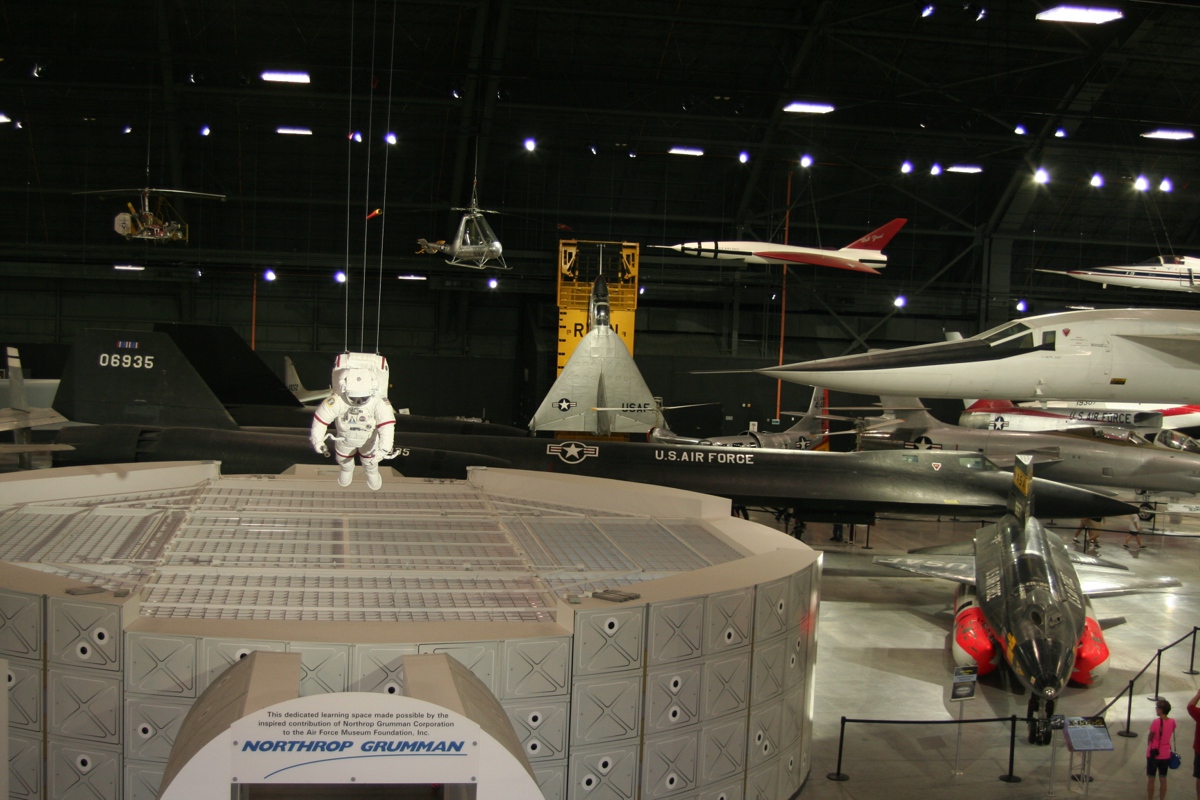 This is one project that paved the way for more advanced models.   Follow the link below to learn more about the DARKSTAR.  The text on the sign is found on the web page. https://www.nationalmuseum.af.mil/Visit/Museum-Exhibits/Fact-Sheets/Display/Article/195774/lockheed-martin-rq-3-darkstar/ 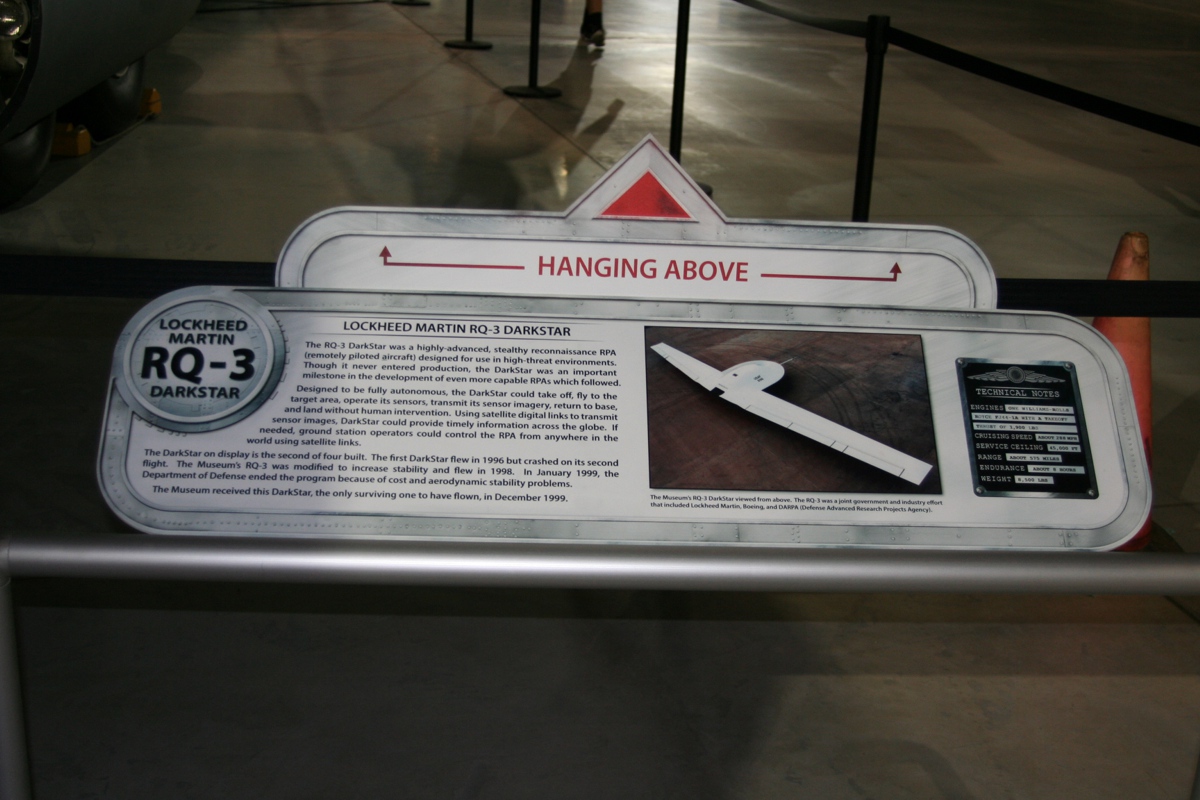 Dark Star is has a shape made for stealth.  The next project with a similar mission was the RQ-4 Global Hawk. 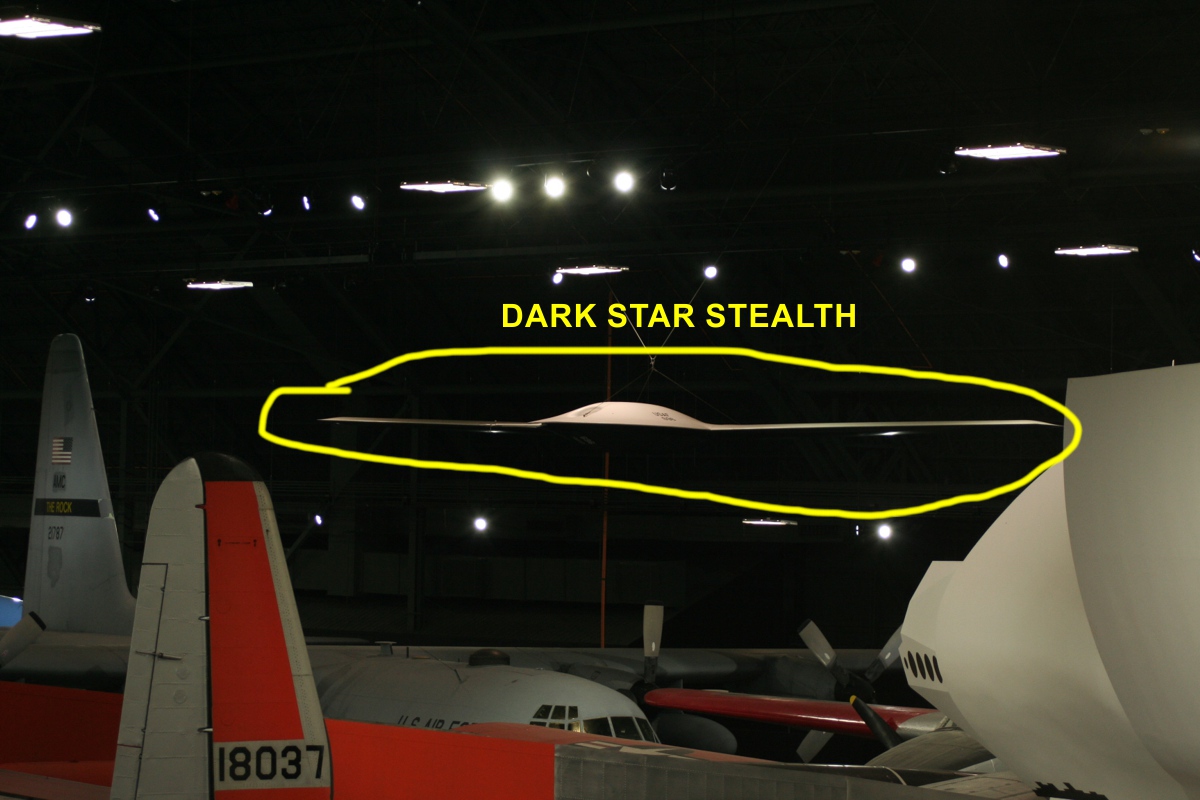 The Global Hawk was the next generation of remotely piloted and autonomous reconnaissance aircraft after Dark Star.  You can see more pictures and learn about this amazing aircraft by clicking on this web link to the USAF Museum: https://www.nationalmuseum.af.mil/Visit/Museum-Exhibits/Fact-Sheets/Display/Article/196043/northrop-grumman-rq-4-global-hawk/ 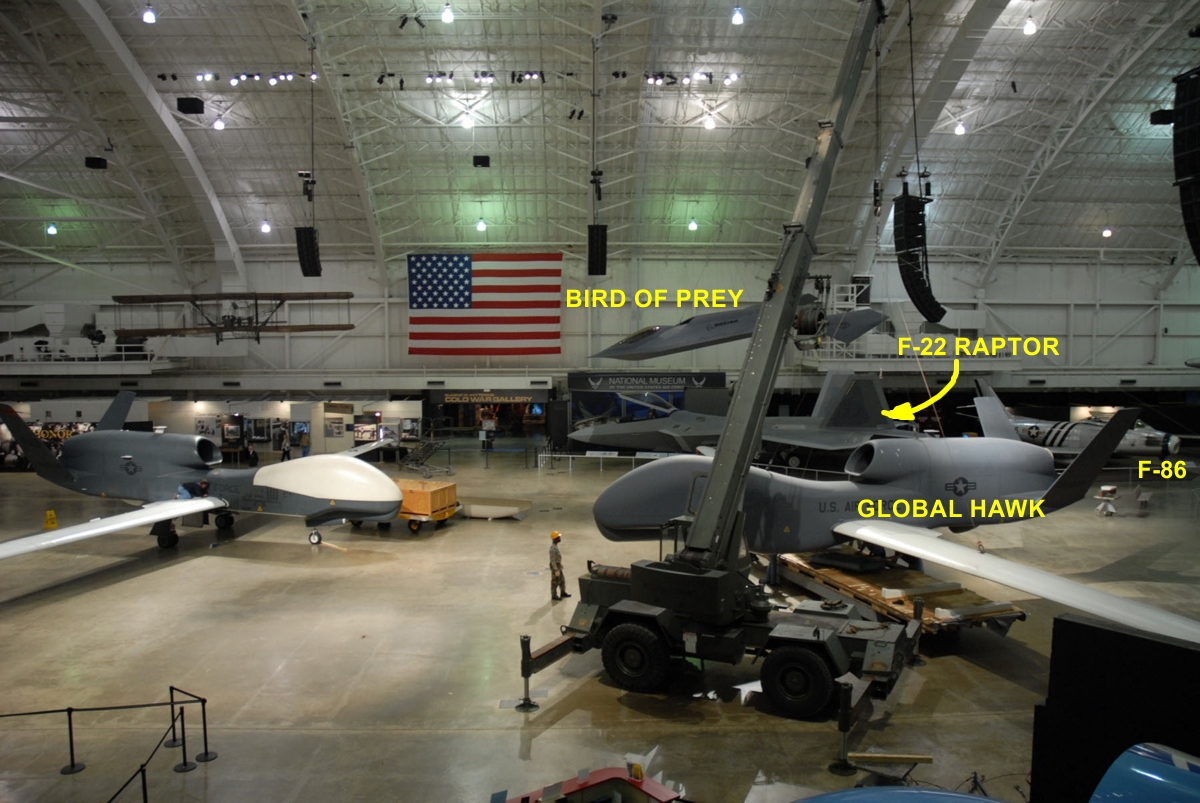 The F-22 Raptor is the current US Air Force top line fighter with stealth technology:
https://www.nationalmuseum.af.mil/Visit/Museum-Exhibits/Fact-Sheets/Display/Article/196040/lockheed-martin-f-22a-raptor/ 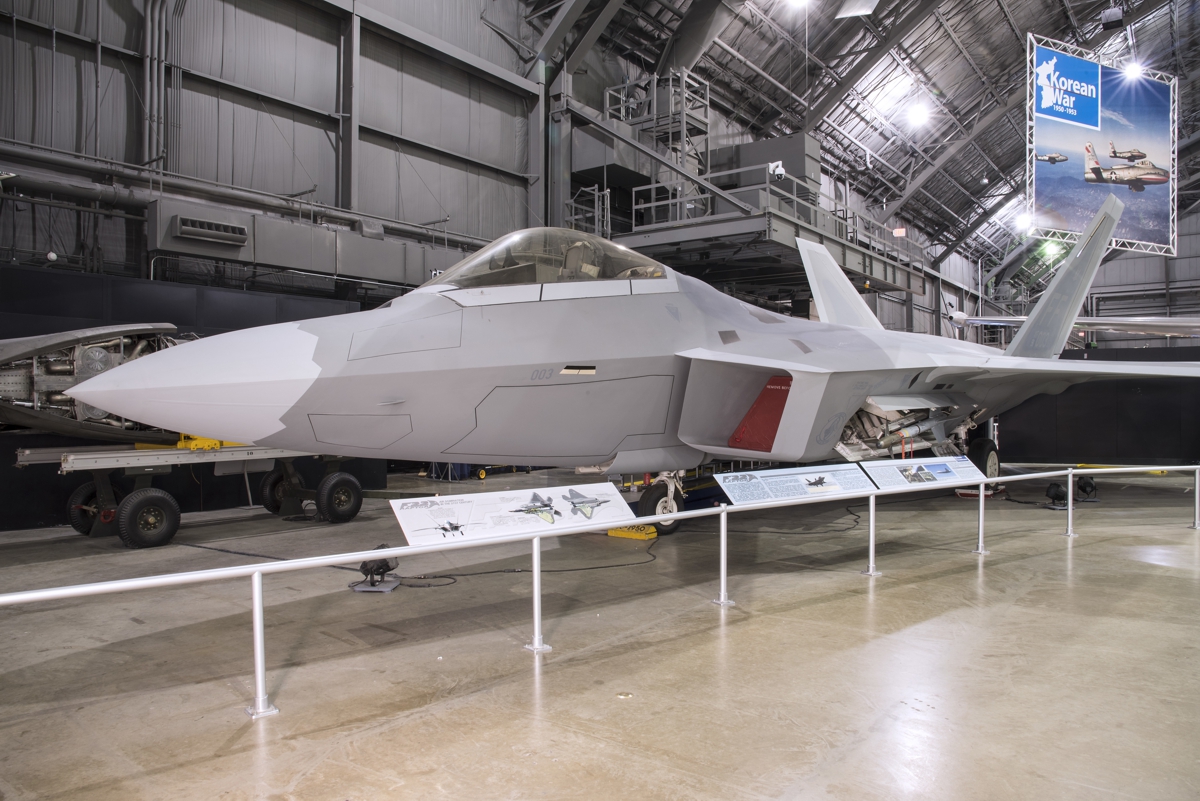 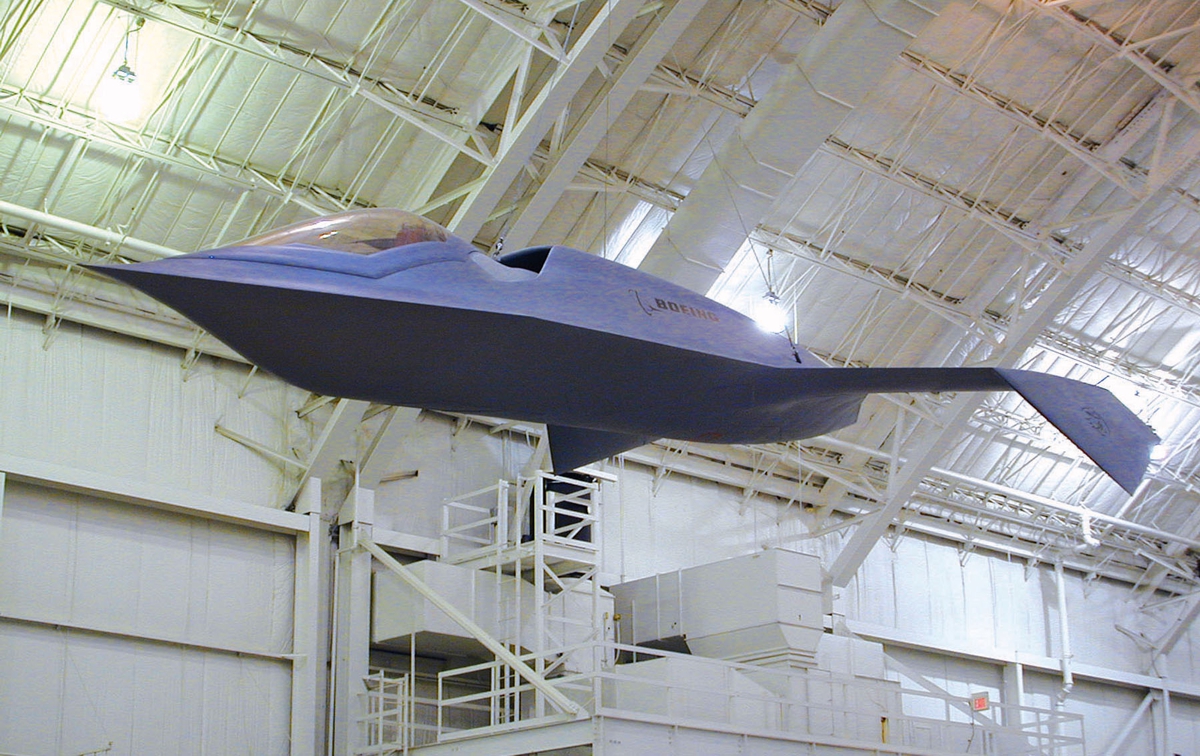 The Boeing X-45A J-UCAS is a highly autonomous uninhabited aircraft with no pilot onboard.  This aircraft is a joint project for the US Navy and US Air Force.  The Navy model can takeoff and land on an aircraft carrier at sea. https://www.nationalmuseum.af.mil/Visit/Museum-Exhibits/Fact-Sheets/Display/Article/196732/boeing-x-45a-j-ucas/ 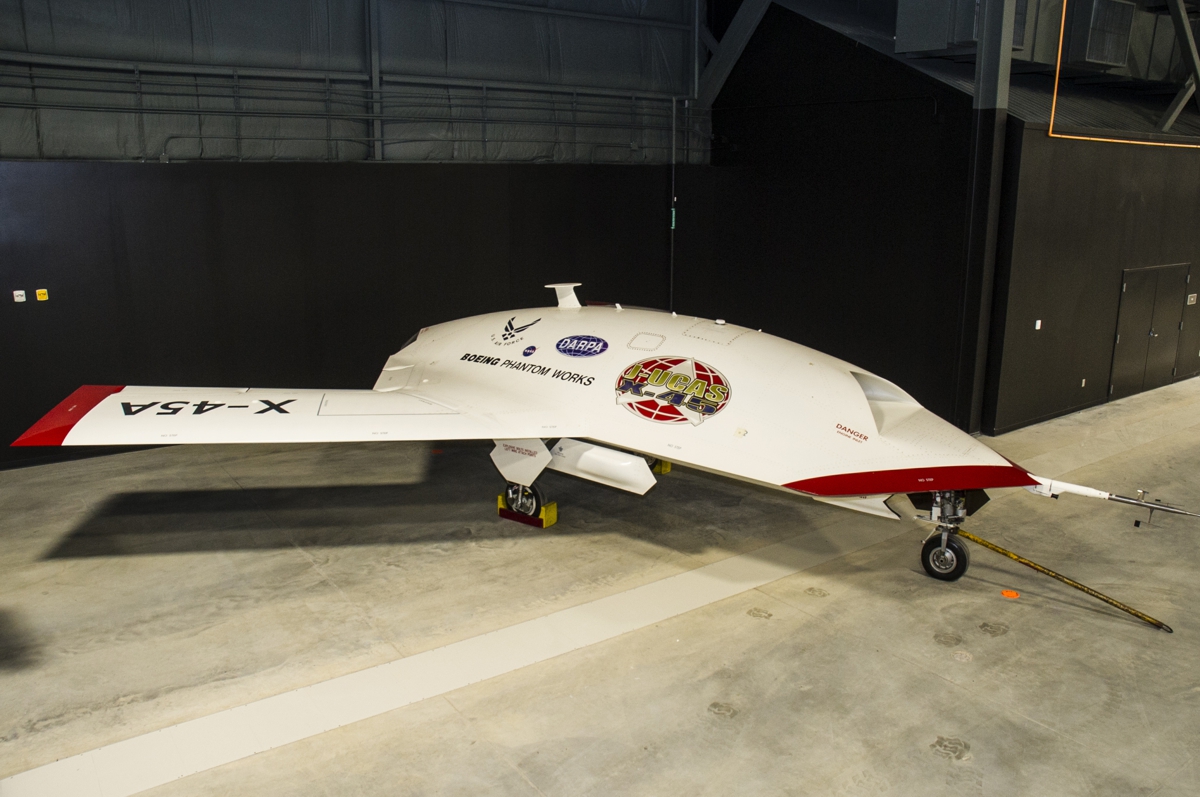 When I took a photo of the shuttle, I saw this Northrop YF-23A stealthy fighter that lost the bidding competition with the Boeing F-22.  Here is link to the USAF museum web page about the YF-23A with more photos:  https://www.nationalmuseum.af.mil/Visit/Museum-Exhibits/Fact-Sheets/Display/Article/195766/northrop-mcdonnell-douglas-yf-23a-black-widow-ii/ 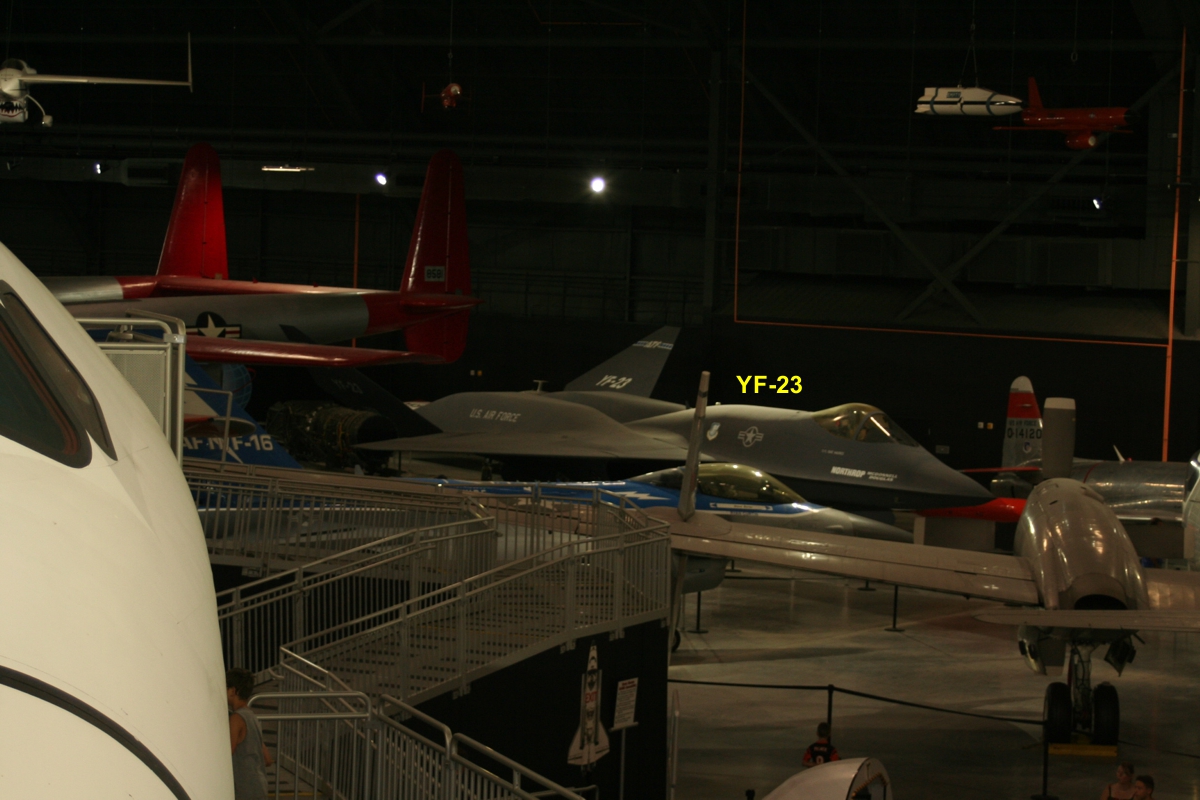 Here is a Space Shuttle full-size mockup ground trainer from NASA.  I have seen this exhibit when it was displayed at Kennedy Space Center.  KSC currently has a retired space shuttle on display in Florida.  I took this photo from the mezzanine level.  The YF-23 is seen at the right side of this photo. 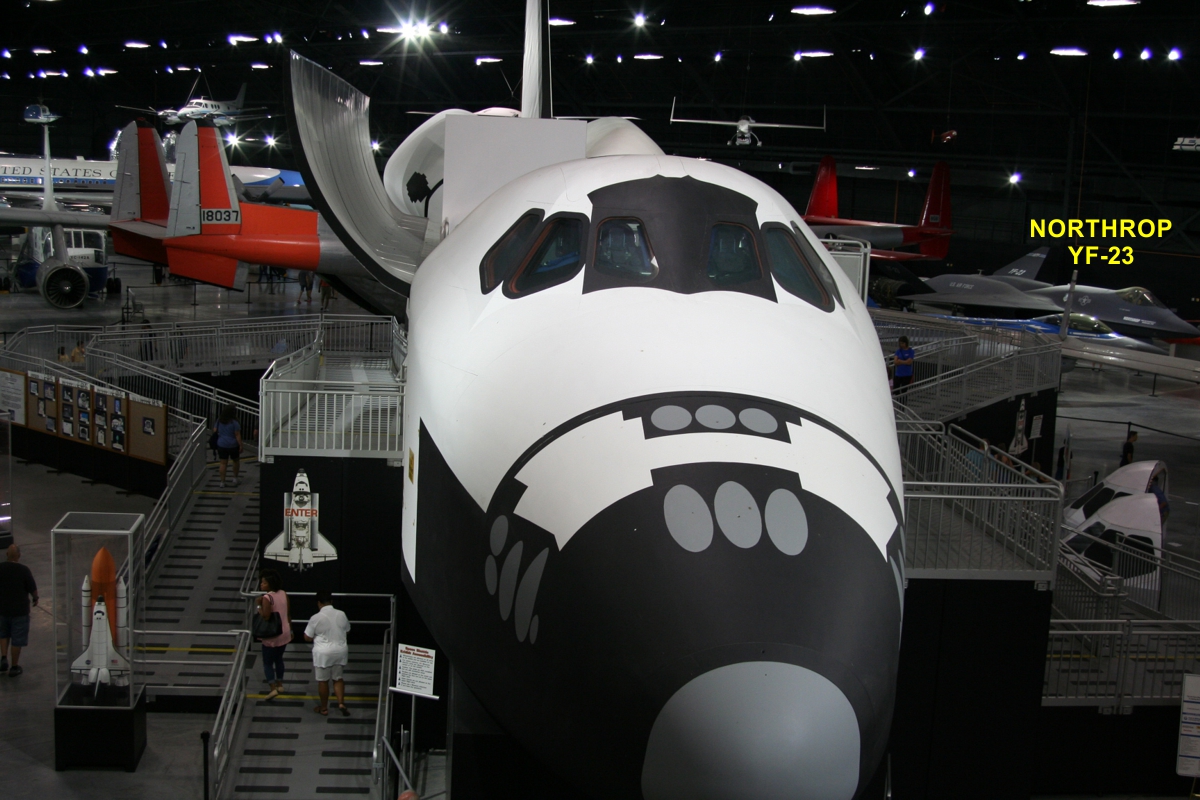 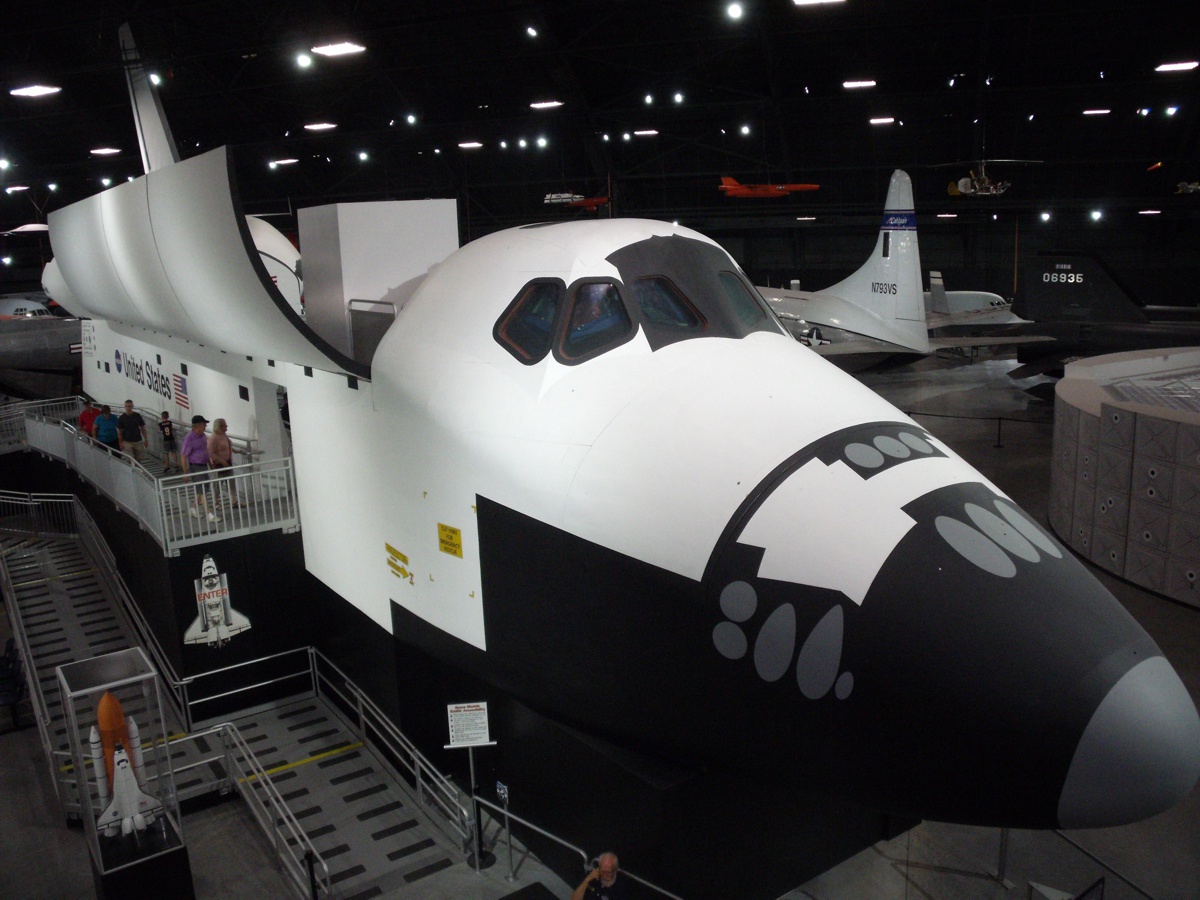 Here is a ground floor look at the shuttle ground simulator. 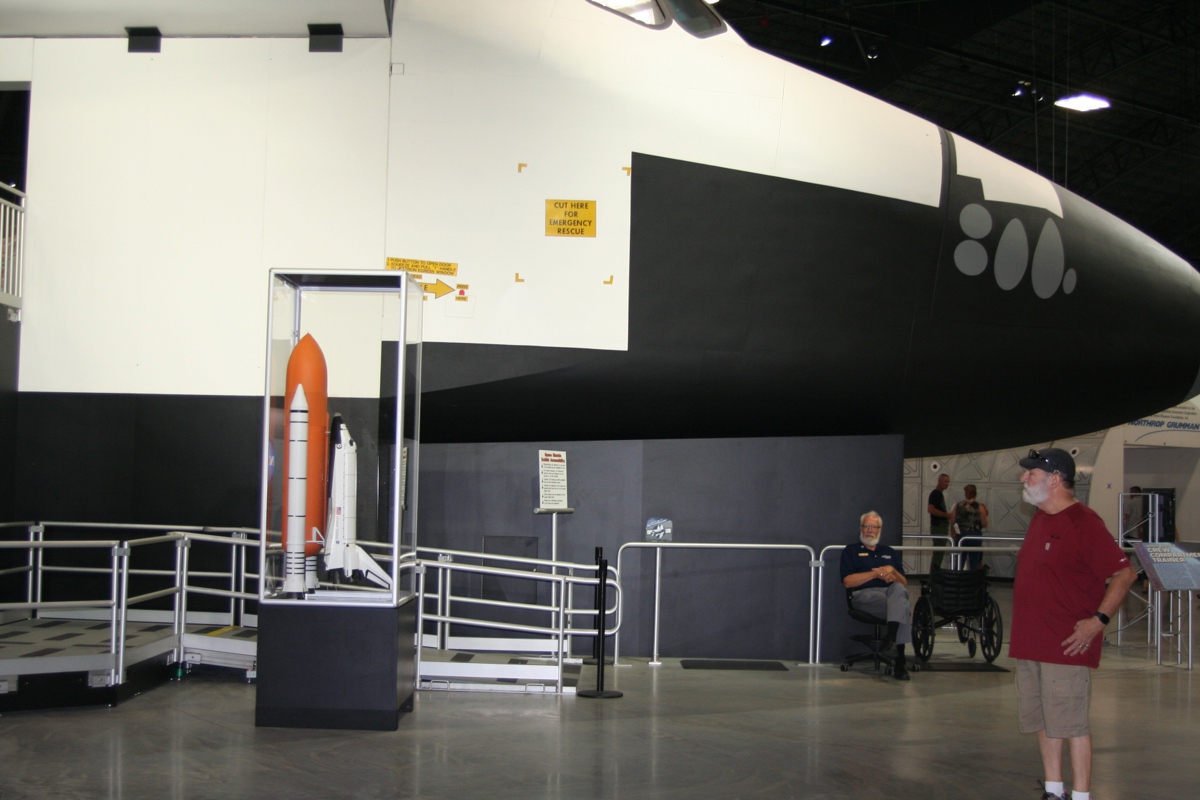 This Boeing YQM-94A was the first long-duration remotely-piloted surveillance aircraft.  The Global Hawk now fills that role in long-range surveillance missions and it is autonomous since it can be programmed for each flight with GPS guidance. 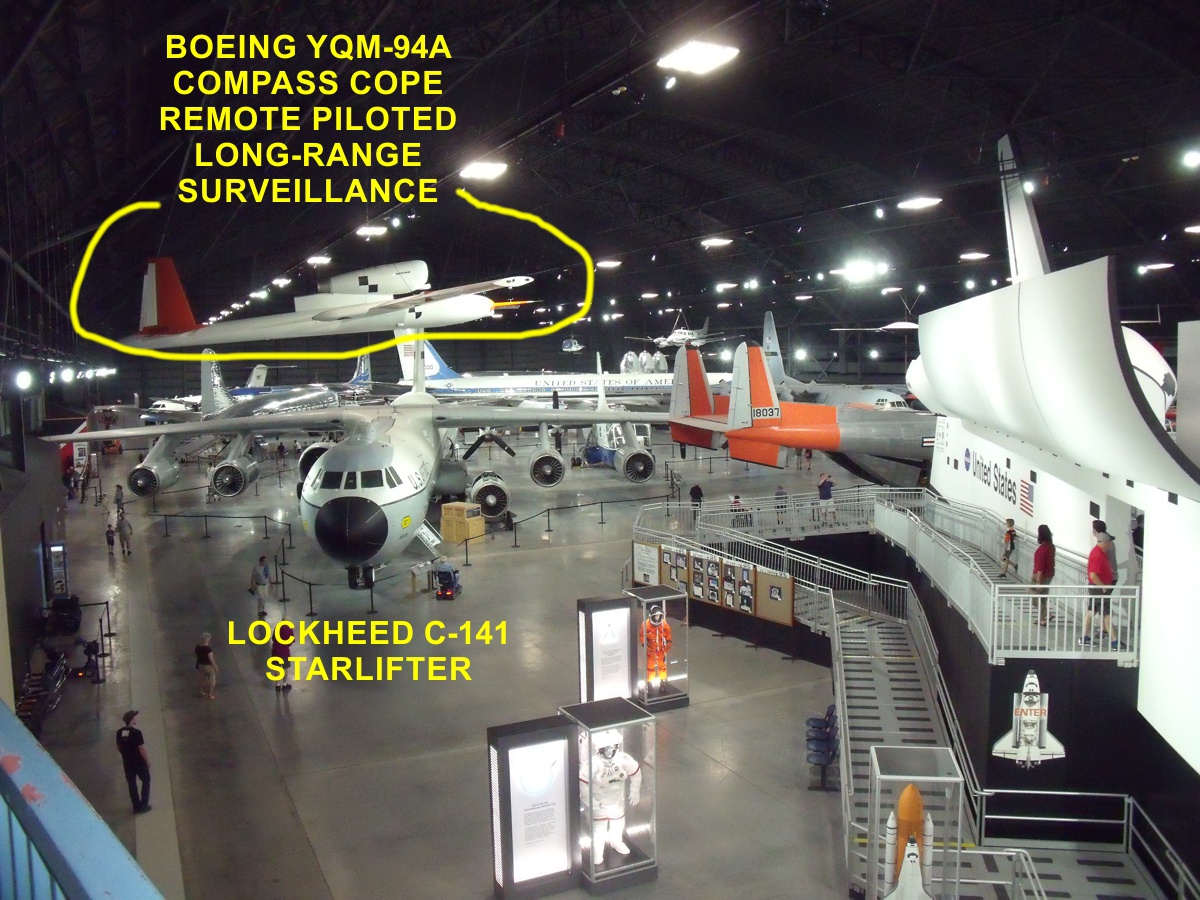 Looking north from the mezzanine in hangar 4 reveals many special aircraft including the Presidential Gallery. 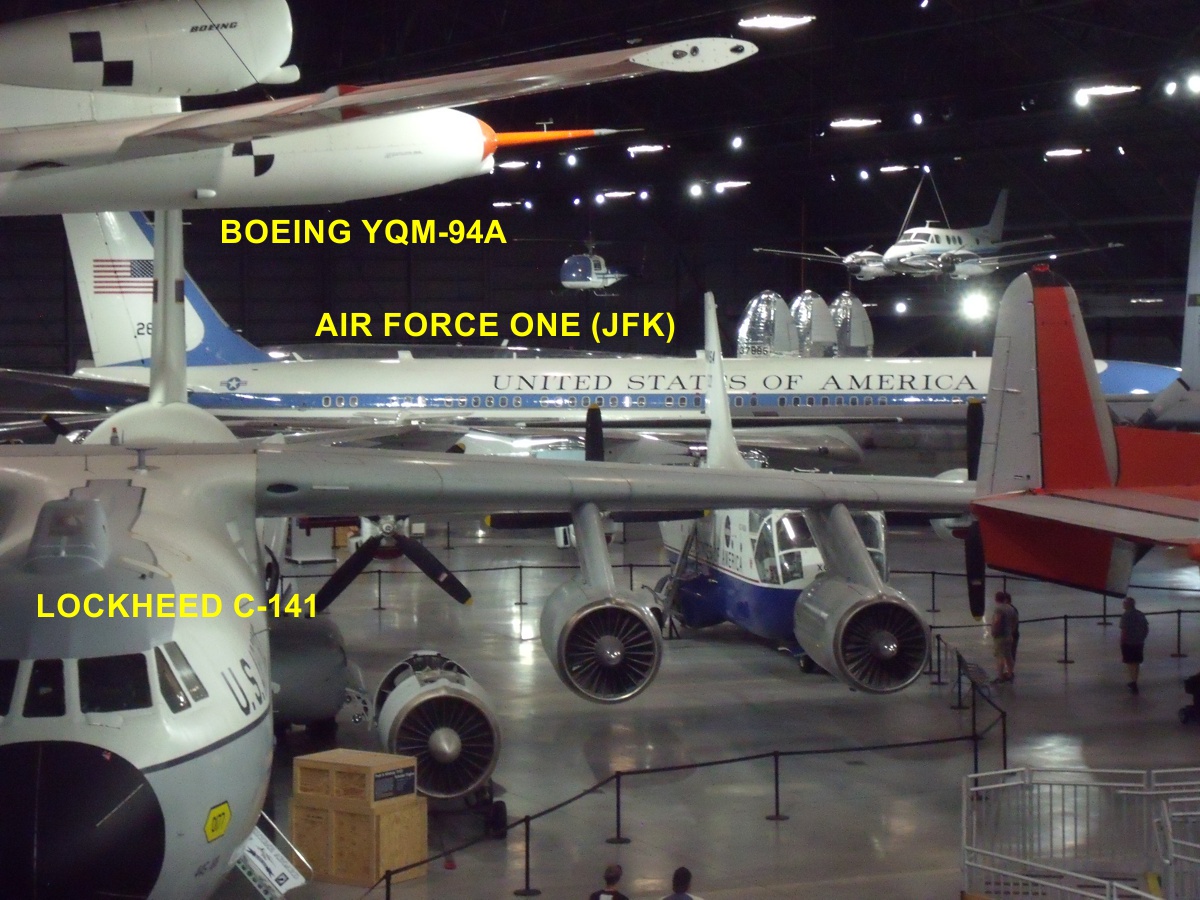 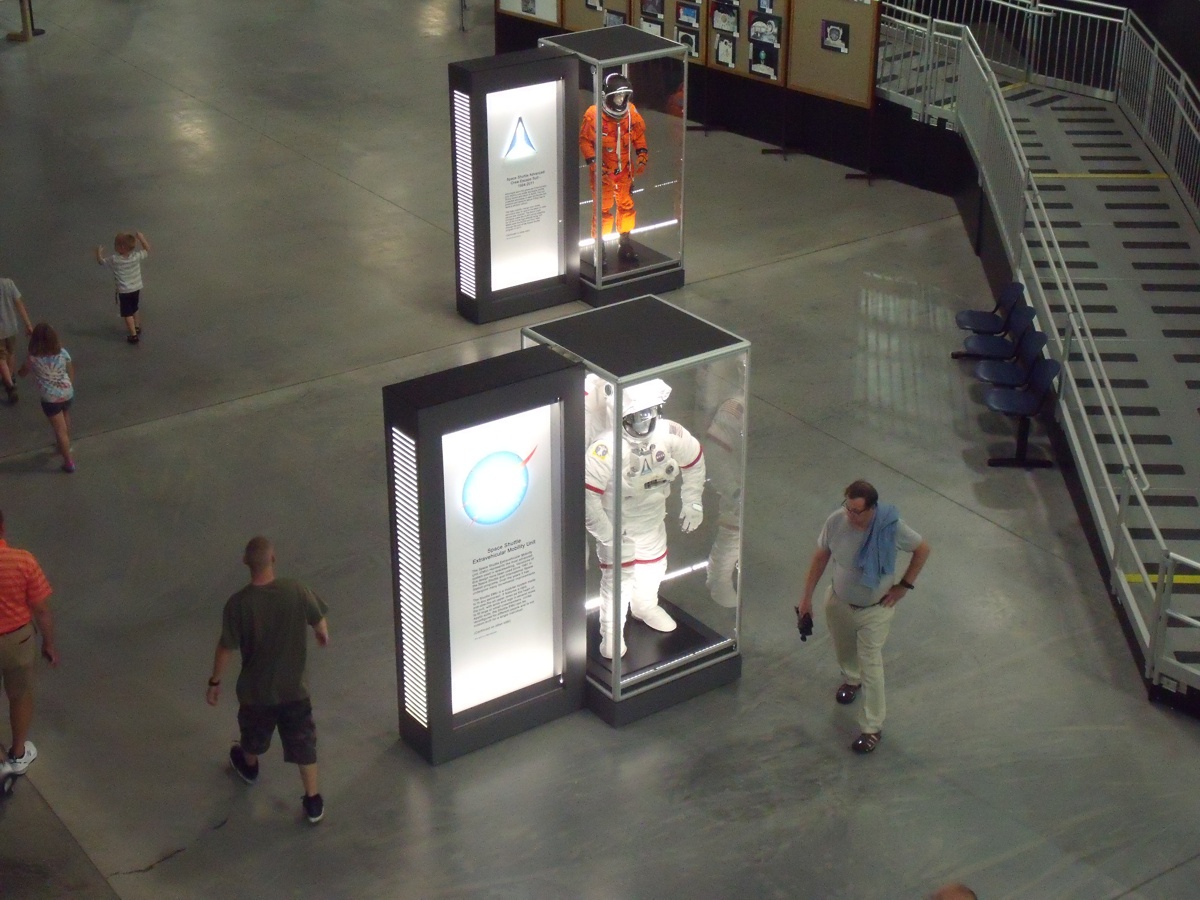 There is a mezzanine level that has a view of two hangars looking down on the main floors.  This view is looking at hangar number 3 north of the newest hangar where the XB-70 Valkyrie is on display.  That large wheel seen below was too heavy and it was a single-point of failure.  The B-36 was the first heavy aircraft to have multiple tires on a "truck" that would spread the load evenly to more than ONE tire.  Linda took this photo. 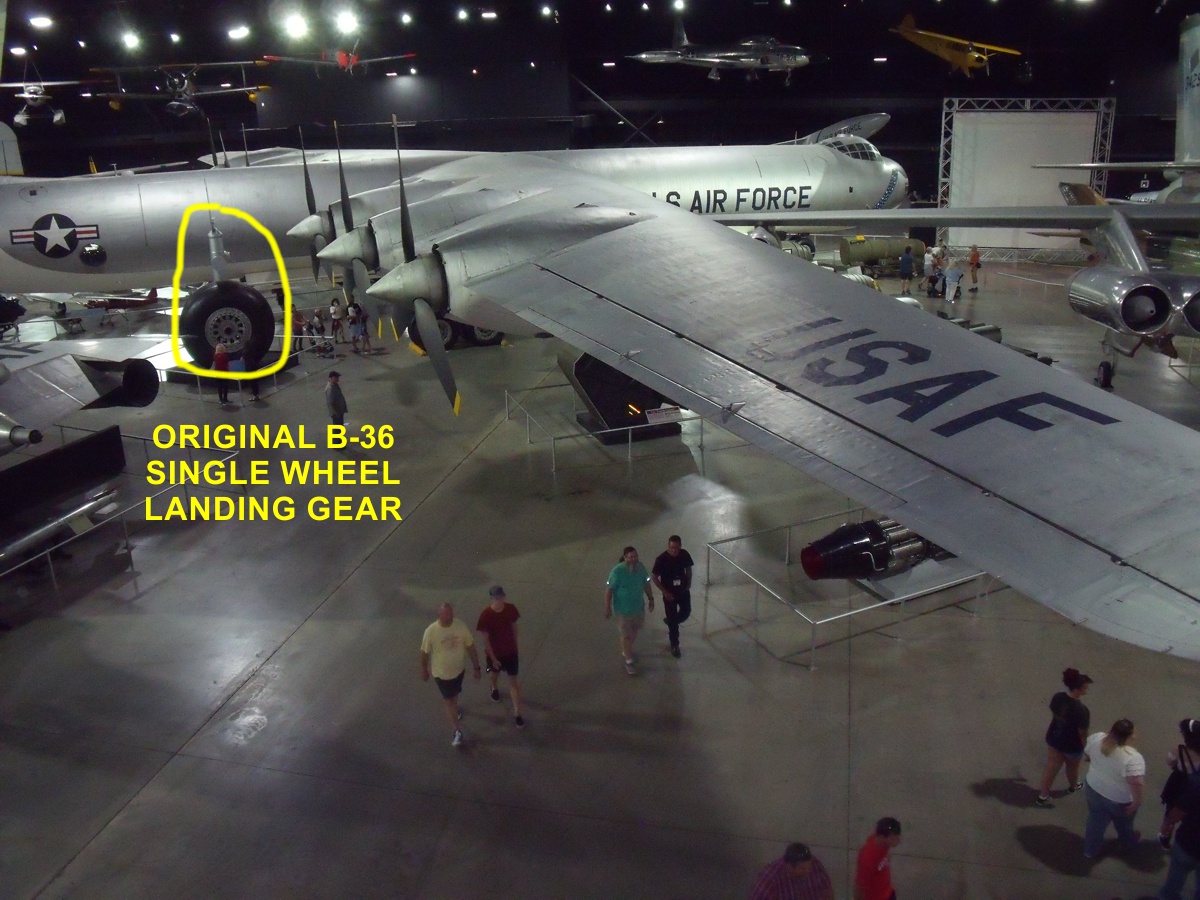 I took this photo down on the ground floor of the Cold War Gallery.  It shows several types of nuclear bombs that could be carried by this long-range bomber built before aerial refueling was perfected. 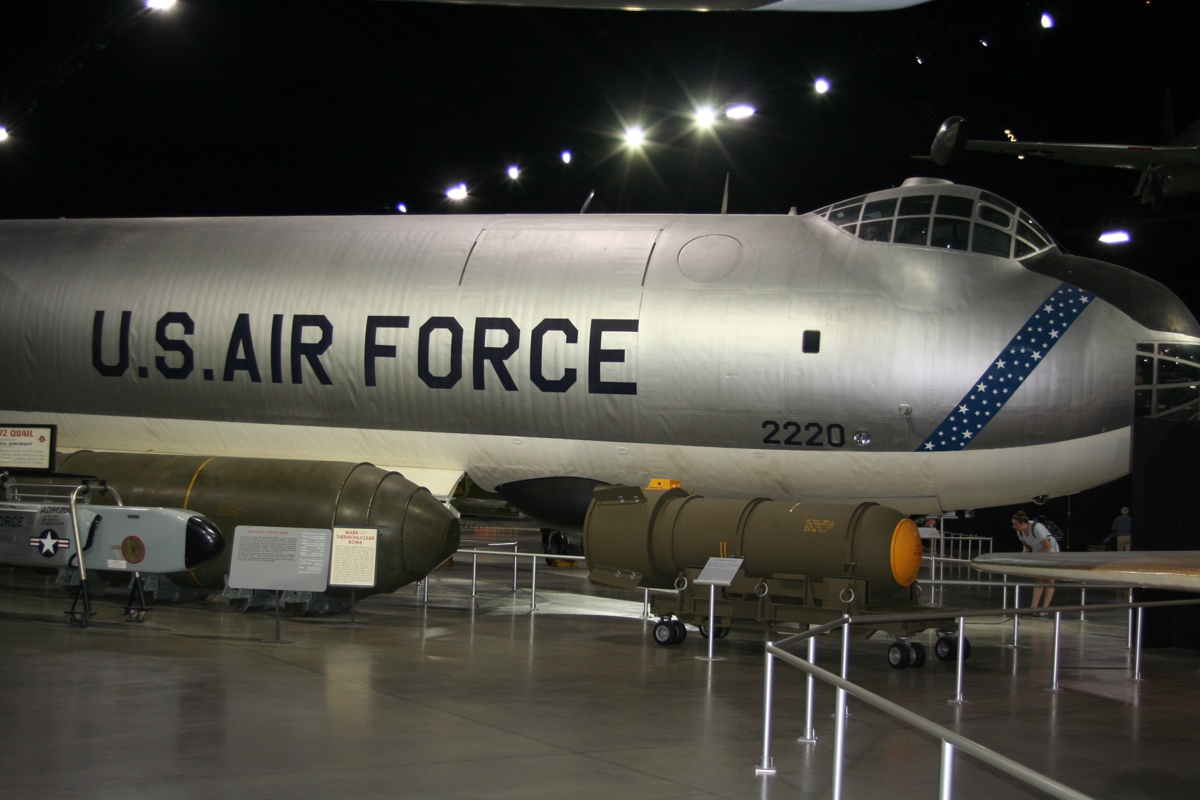 There is one exhibit in this photo that is NOT associated with the B-36.  There is an air-launched missile with the sign showing it as GAM-72 which was it's original designation.  That little missile was carried in the bomb bay of a B-52 to be flown with a B-52 as a RADAR DECOY to confuse enemy ground radar systems.  McDonnell built it with folding wings that would open when it was dropped out of the bomber.  The current designation is ADM-20 Quail.  It can fly on a parallel course and at the same altitude as the bomber, provide a radar signature as if it is really a B-52.  With the introduction of long range, air-launched cruise missiles (ALCM), the B-52 carries the missiles with their warheads about 100 miles from the target before launch from the B-52.  The bomber stays out of range while the ALCM (flying bomb) is sent to destroy the target. 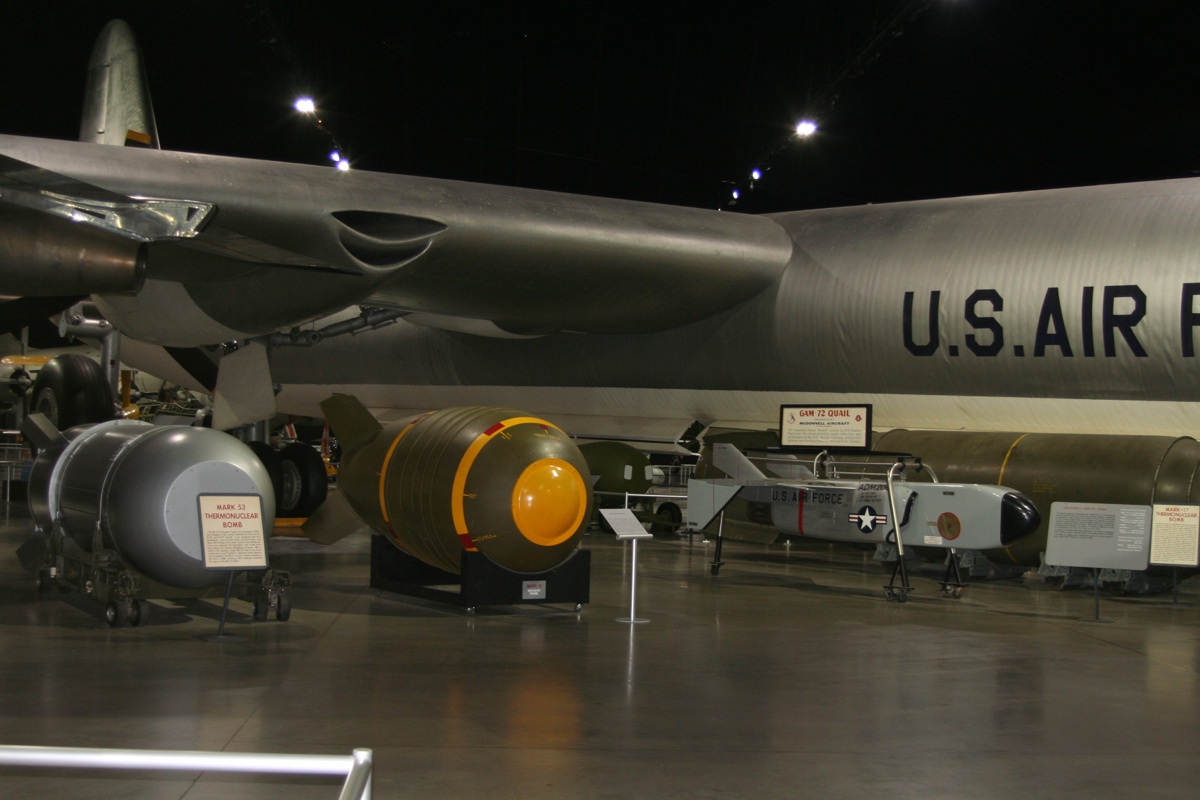 There are TWO bomb bays on the B-36 as there are on many modern bombers like the B-52 and the B-1B supersonic bomber.  This allows for bombs to released alternately from the front, then the rear to maintain aircraft weight and balance requirements for stable flight.  Proper weight and balance is a requirement for all aircraft, not just bombers. 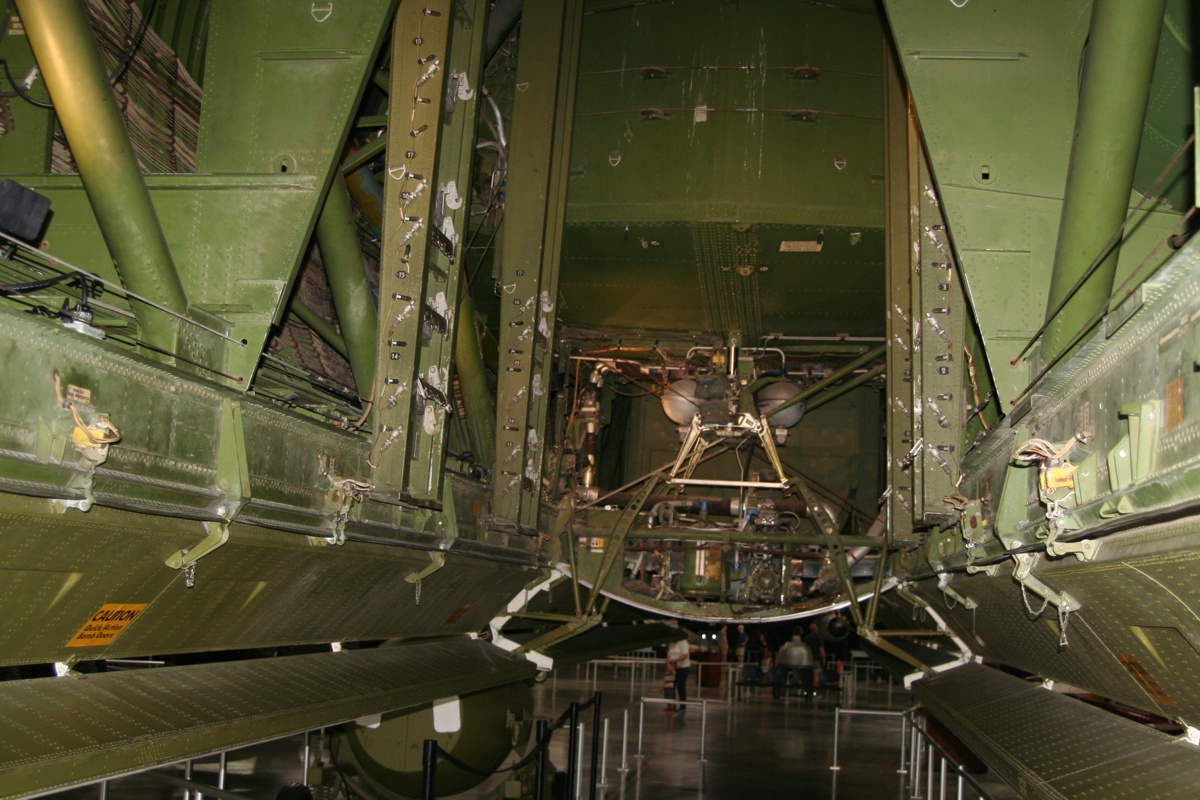 I took all the remaining photos on this web page. 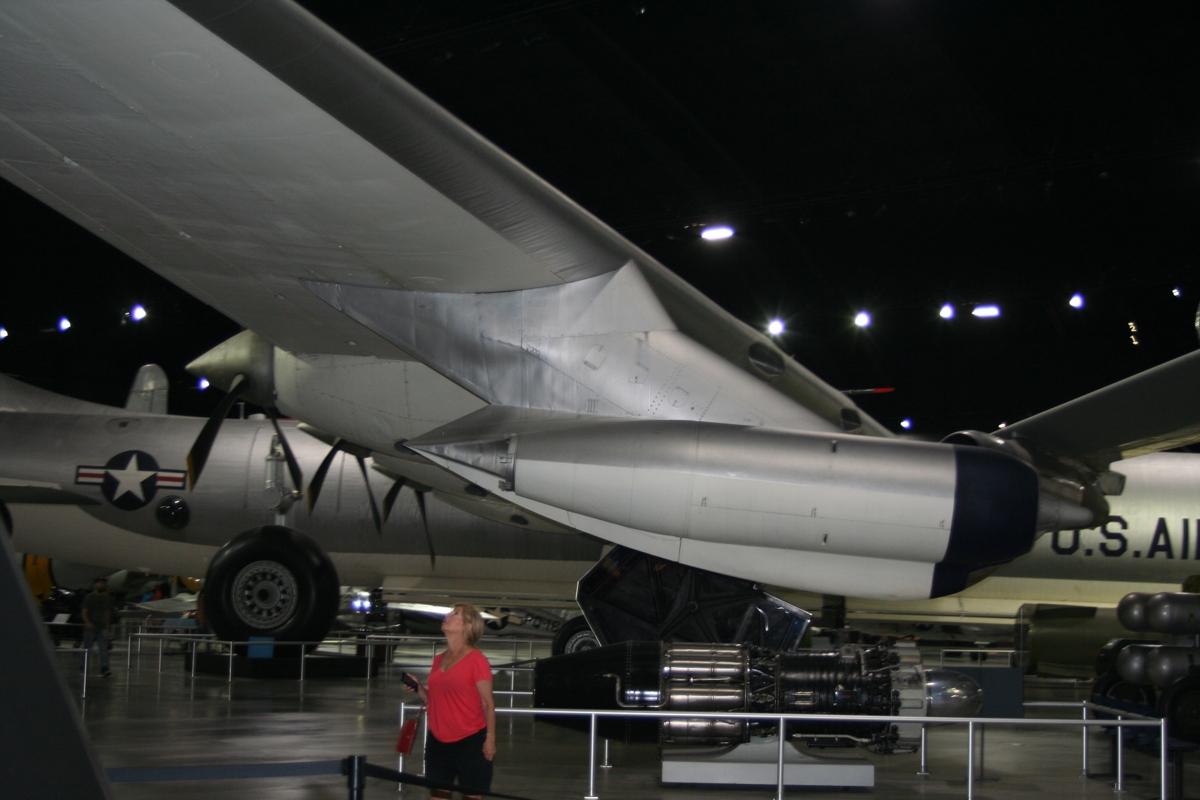 The four-tires on the right landing gear is an example of a "truck" to distribute the weight of the aircraft evenly to the tires. 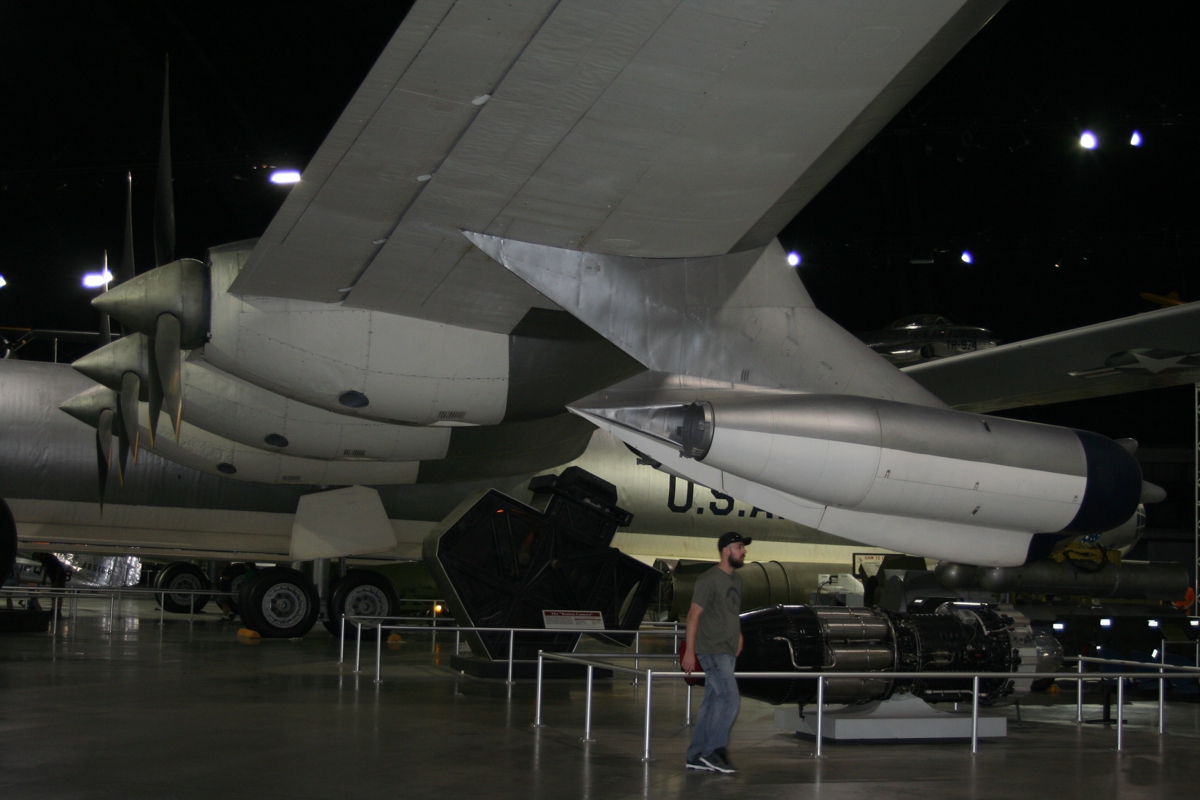 Compare the ONE large HEAVY tire to the four smaller lighter-weight tires.  That large tire was one of TWO on the prototype B-36.  Those large tires were replaced by the four tires seen on the floor holding up the airplane from both sides of the fuselage. 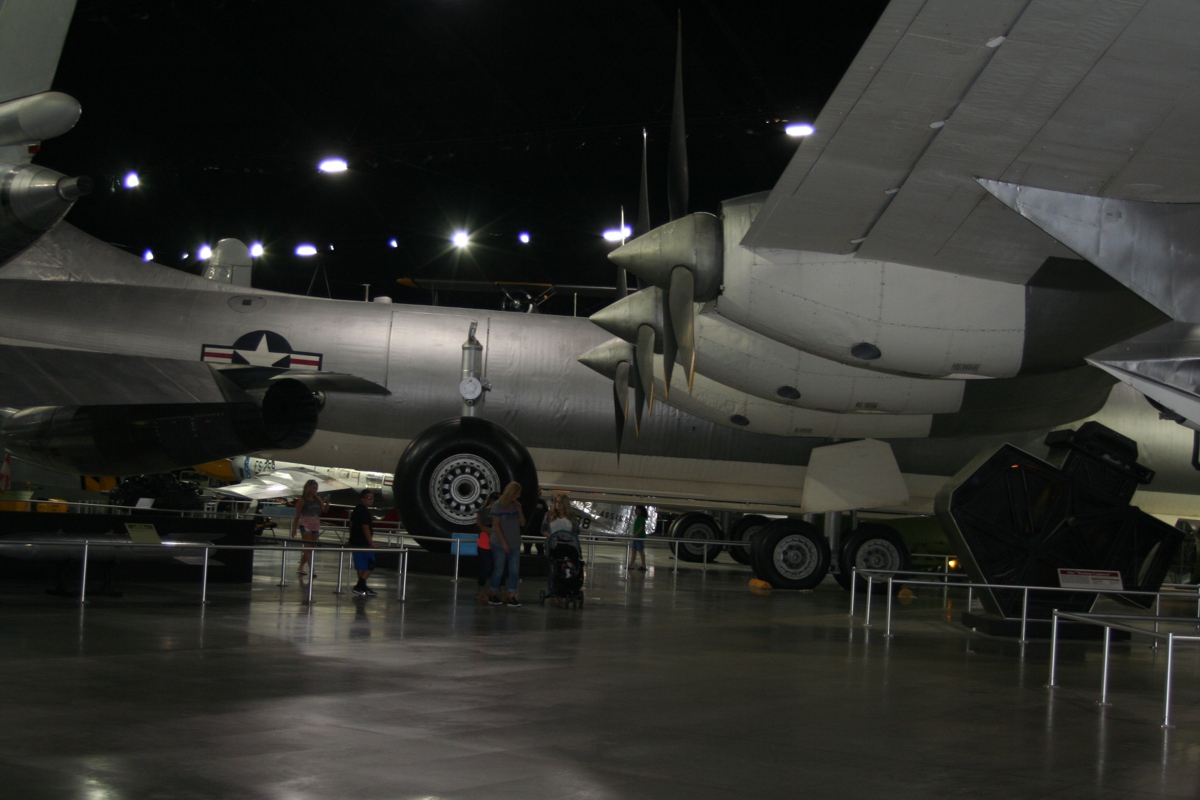