When we went up to the mezzanine, we had a new perspective on the aircraft below on the hangar floor. 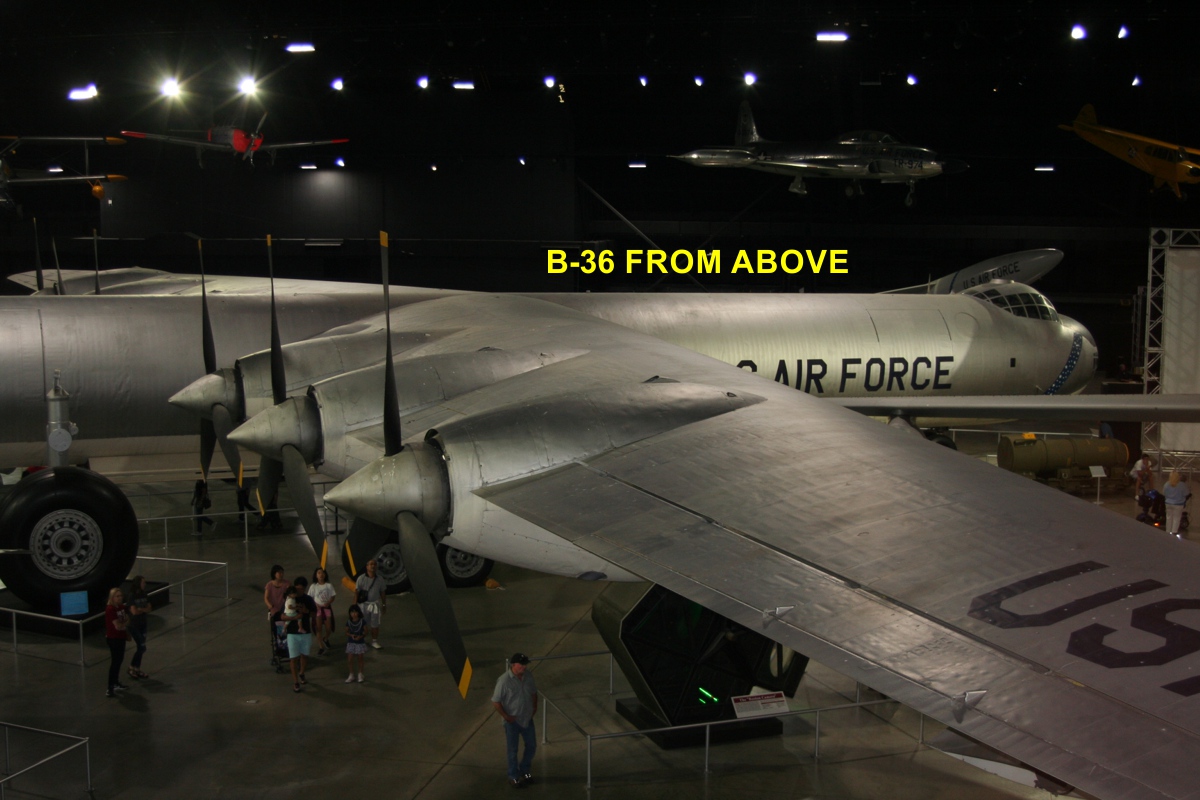 There is one jet engine on the floor like the FOUR that were on the B-36 wings, two on each wing, 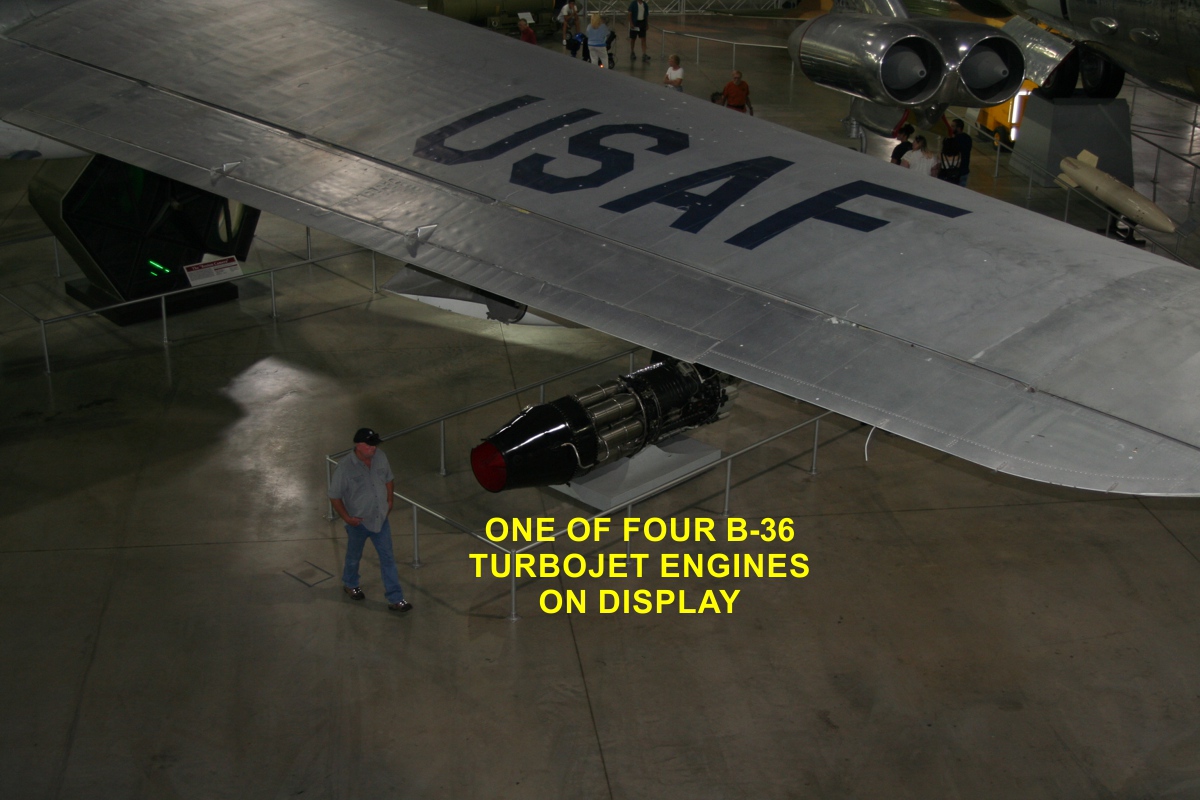 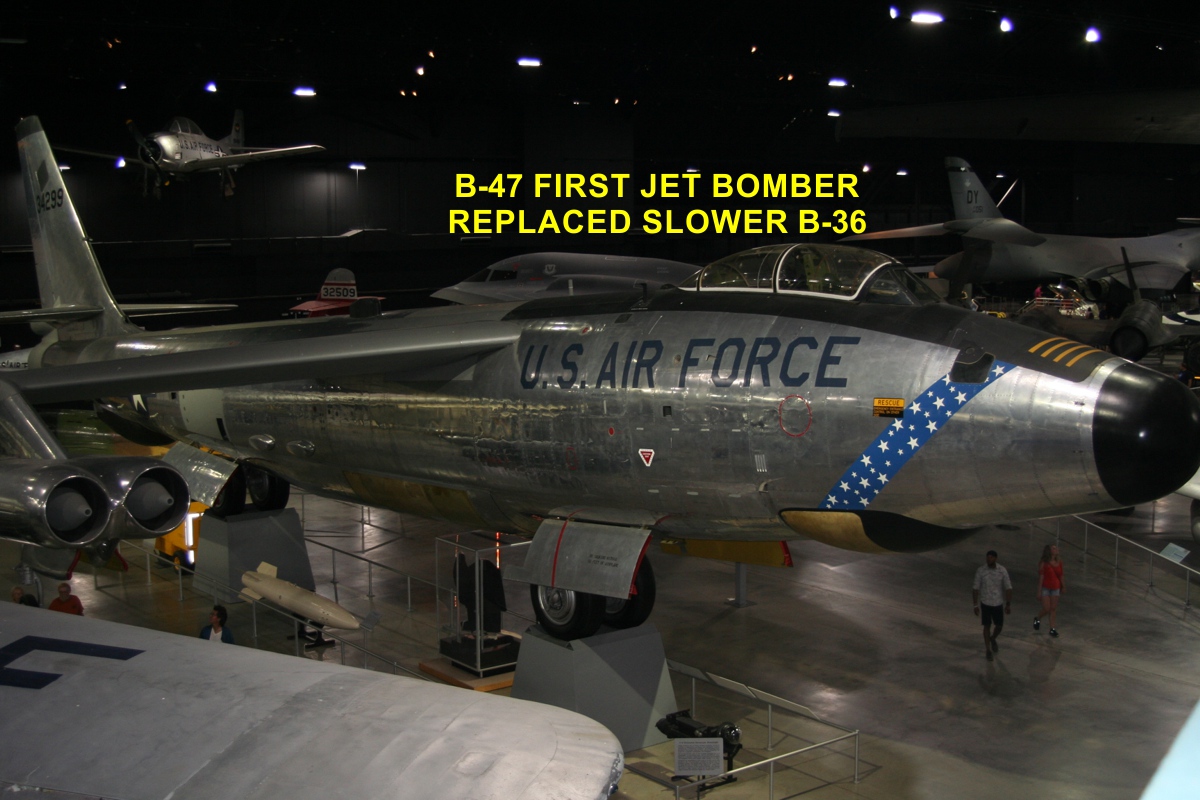 The B-47 jet bomber was also featured in the 1956 movie "Strategic Air Command." 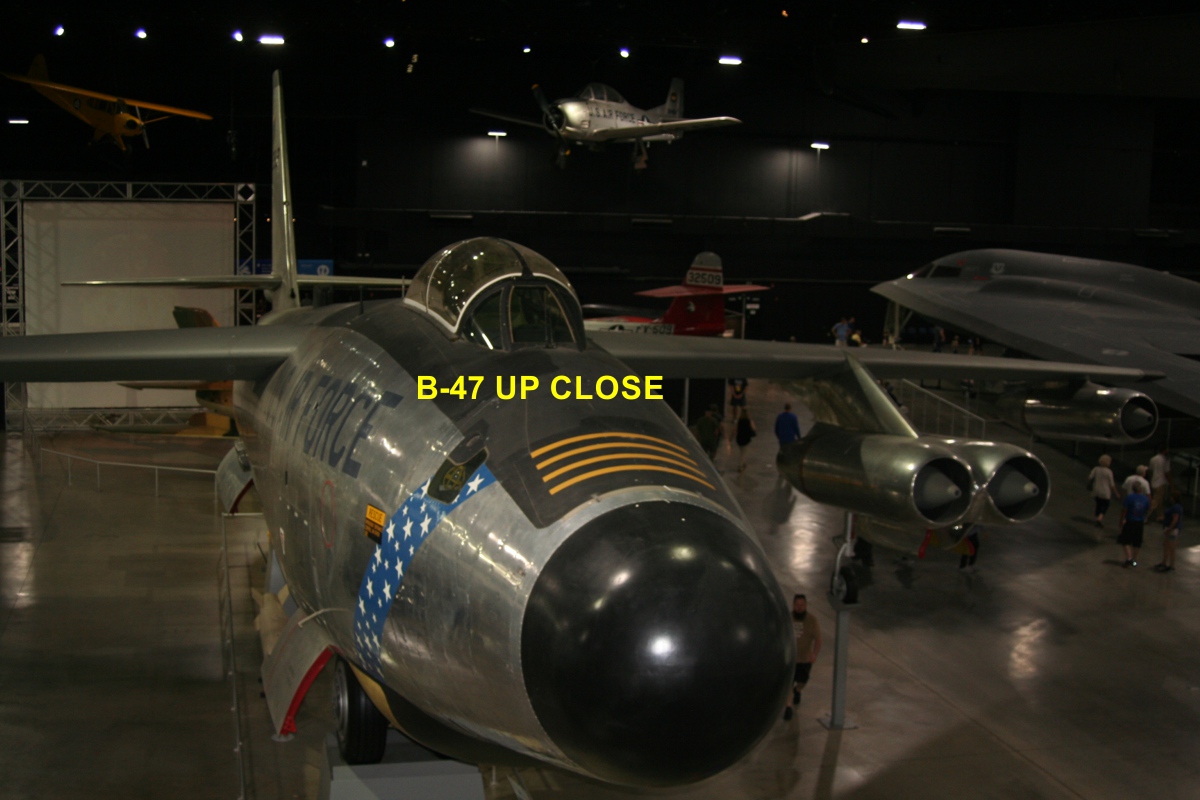 This image shows the RIGHT wing of the B-47 with three jet engines of the 1950's. 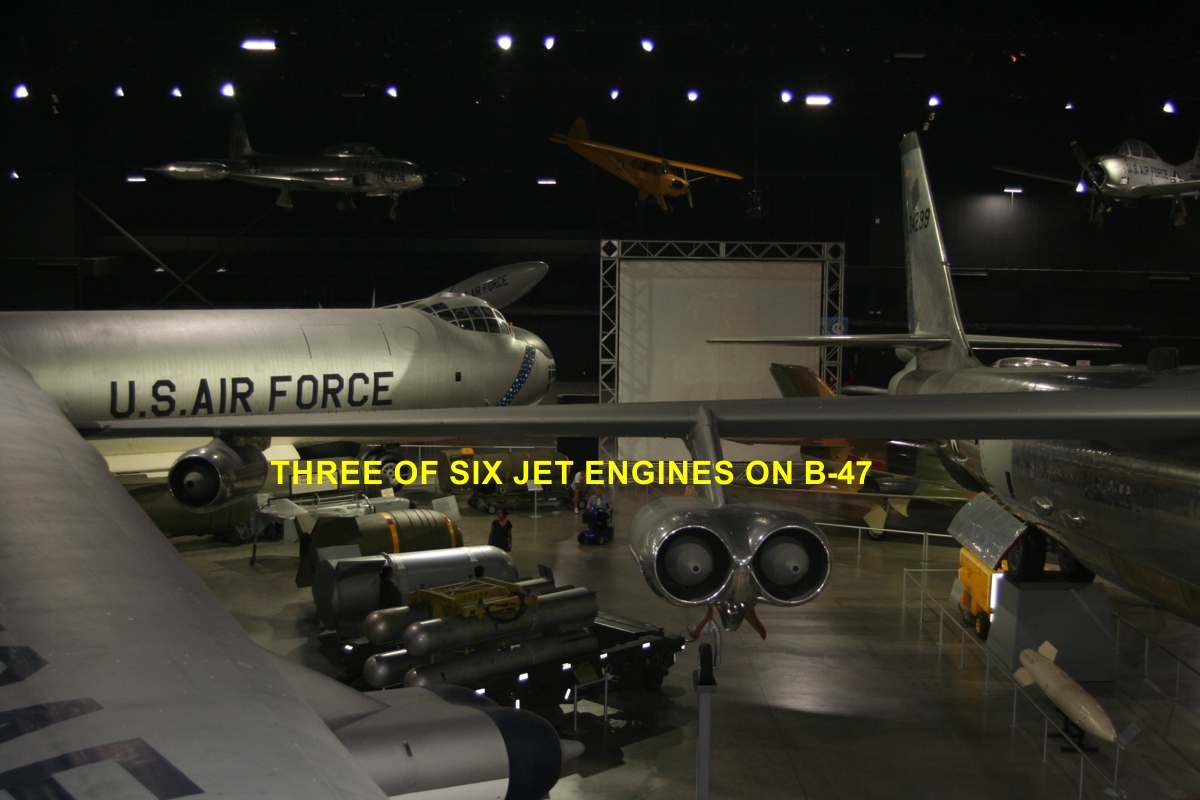 B-2 Stealth Bombers are assigned to the 509th Bomb Wing, the same squadron that dropped the atomic bombs on Japan using Silver Plate B-29's in August 1945 to end that war.  This image also shows the LEFT wing of the B-47 with the other three engines. This image is similar to the photo above but with a wider field of view to show more of the SR-71 and the tail section of the B-1B supersonic bomber. 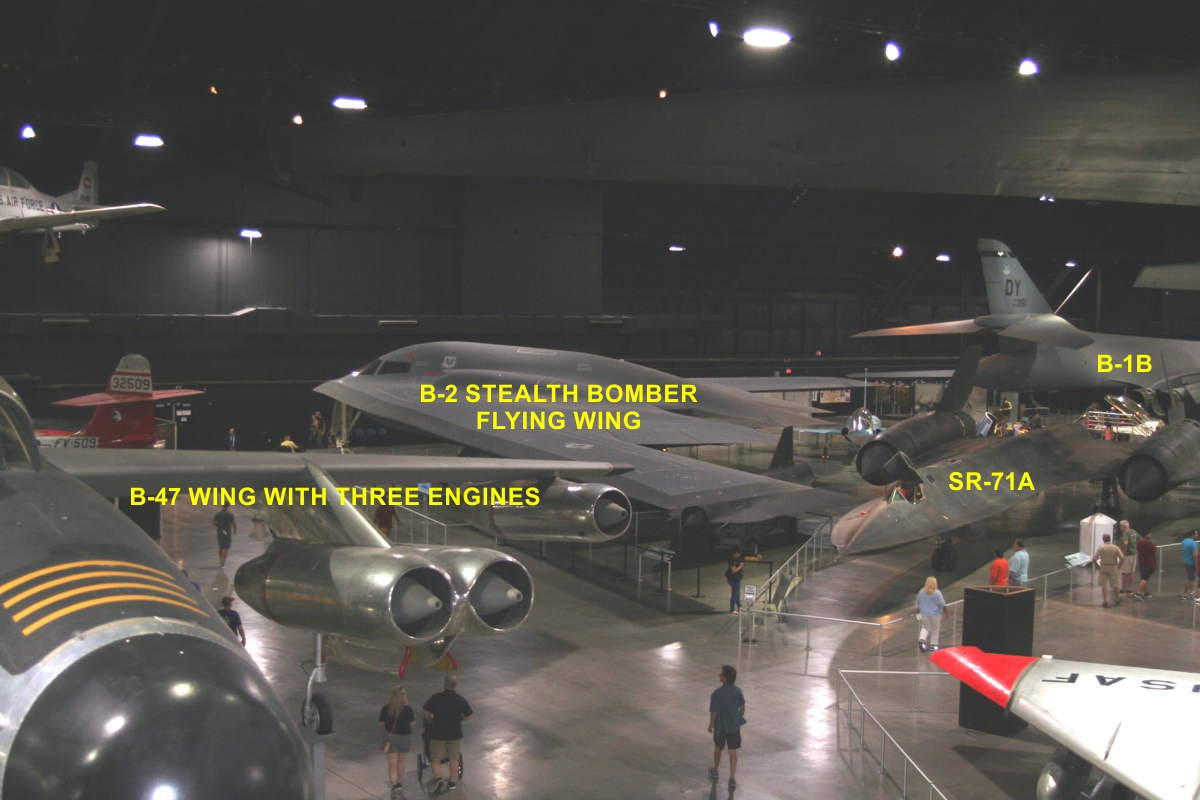 This image is panned a bit to the right of the photo above.  Since the US-2 is painted black, I had to put the yellow label on the underside of the right wing. This is a view from the second level of the Missile Gallery snack bar area.  The U-2 is painted BLACK on the bottom and you would have missed it if I had not marked it with yellow lettering showing the long wings of this early spy plane.  The Lockheed SR-71 Black Bird is seen in this gallery.  It's smaller YF-12A predecessor is in the research gallery parked near the XB-70 and the X-15. I put yellow labels on a view of the airplanes here. 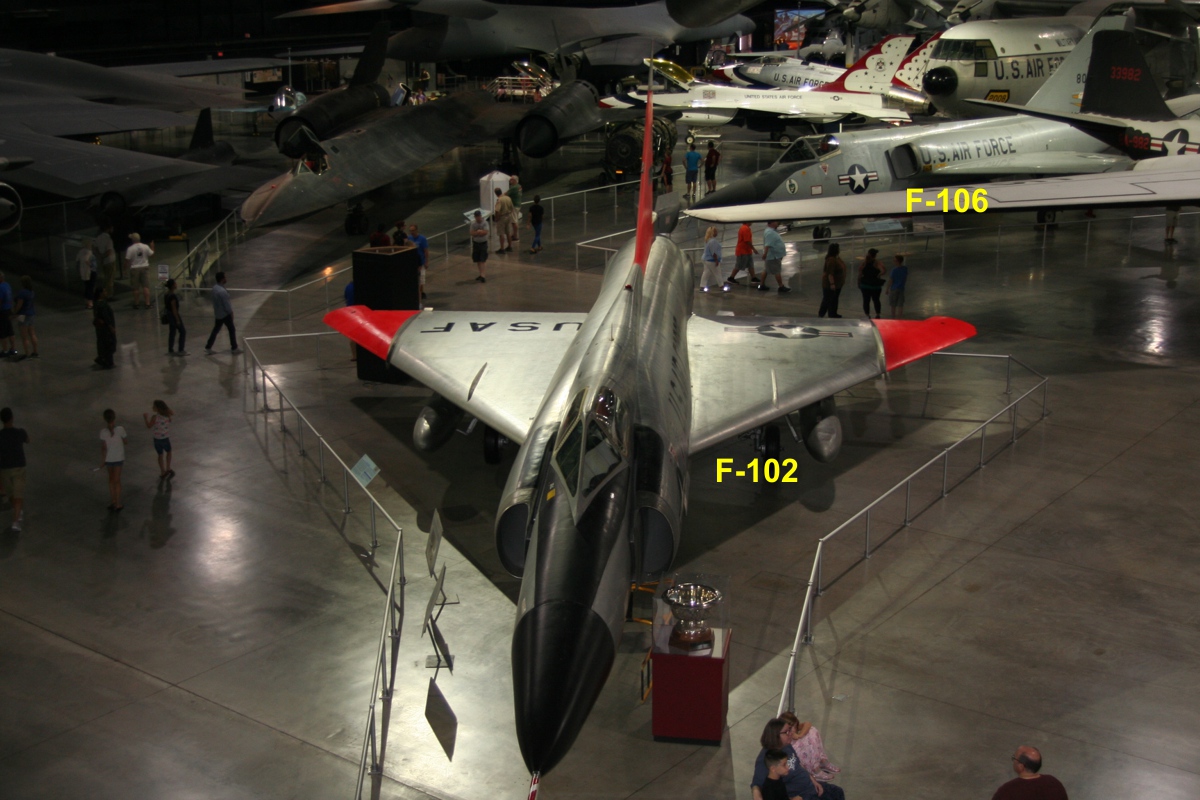 Wider field of view looking further back from the mezzanine. I wanted to emphasize the RB-57D in this image. The Lockheed F-117 Stealth Fighter goes into the battle first to take out high-value targets without being detected by enemy radar. There is a C-141 Lockheed StarLifter cargo jet behind the Stealth Fighter. 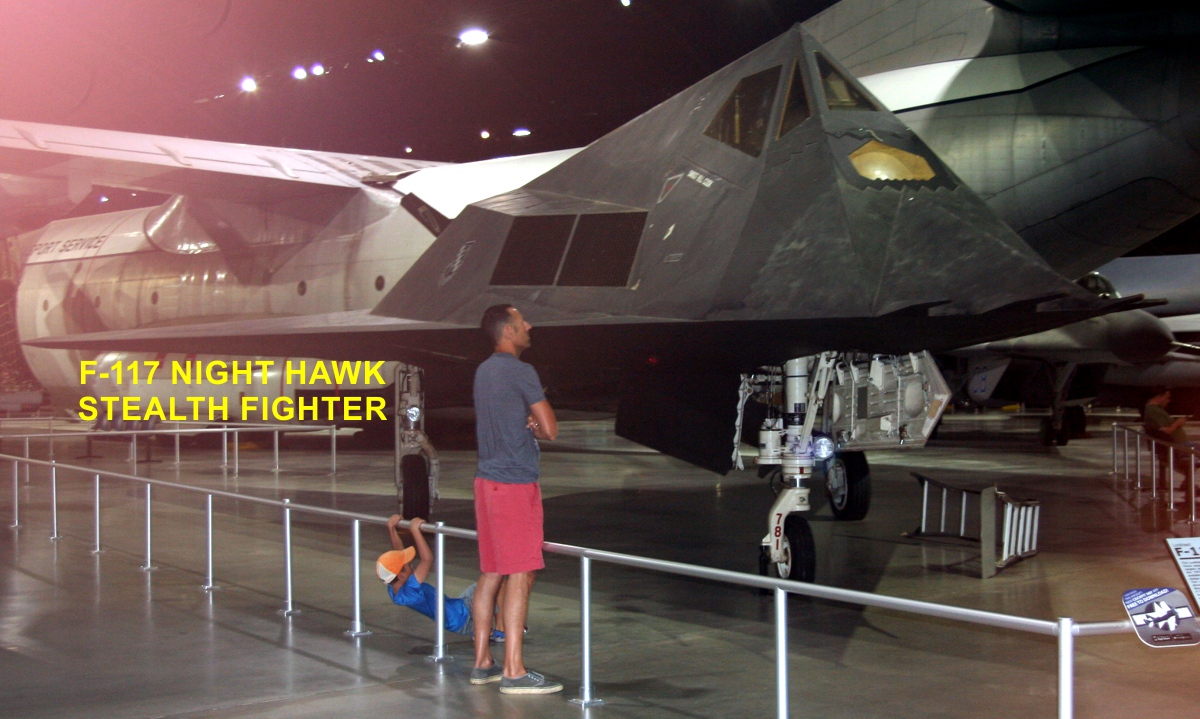 These black airplanes are hard to see. 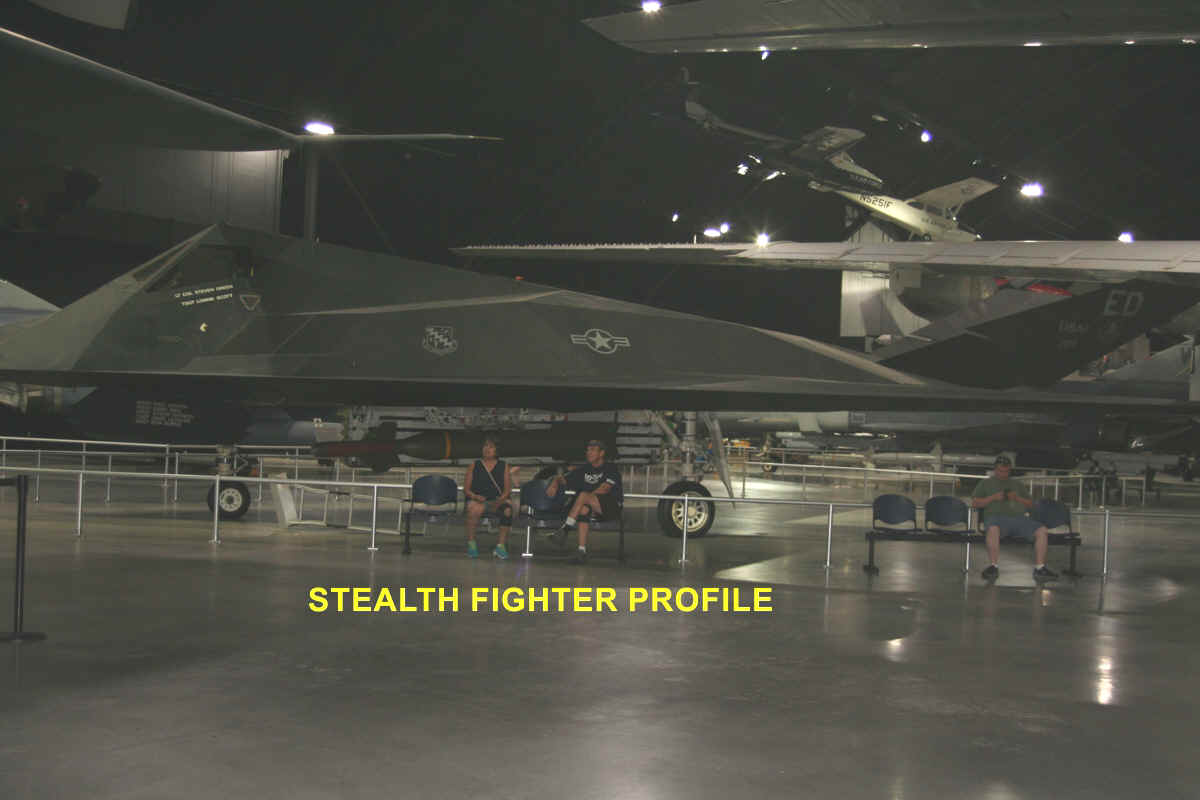 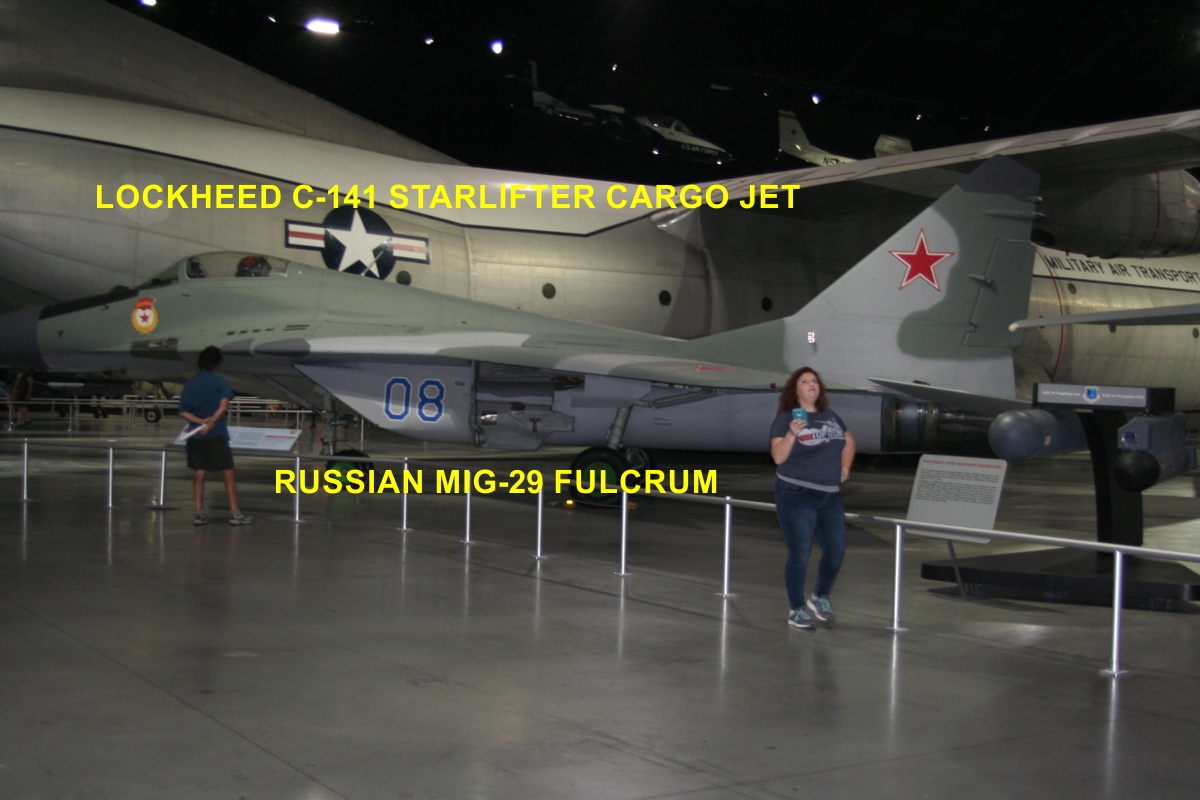 The MIG-29 seen more head on from the front. Here is the data sign on the MIG-29.  You may be able to read it using the zoom control on your web browser. 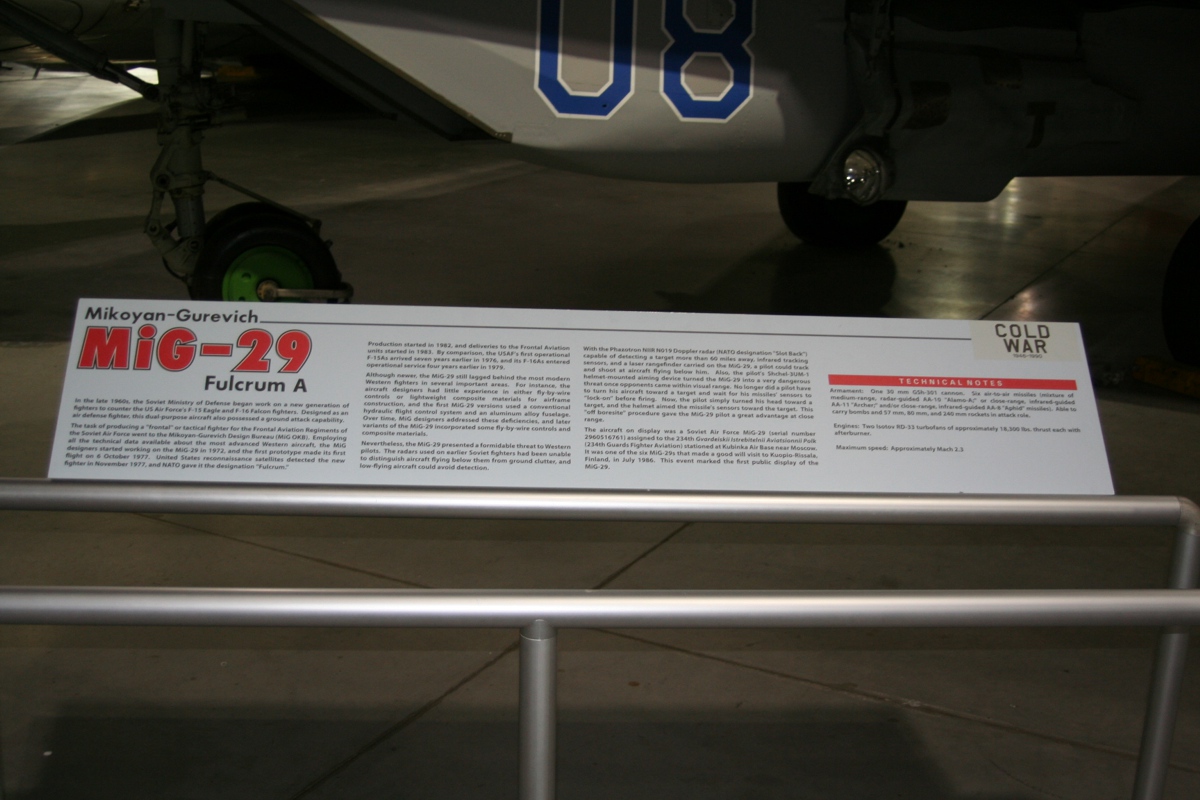 The A-10 proved it is the best close air ground support fighter in the first gulf war.  It is OLD but it is still the best at what it can do.  Linda took this photo. 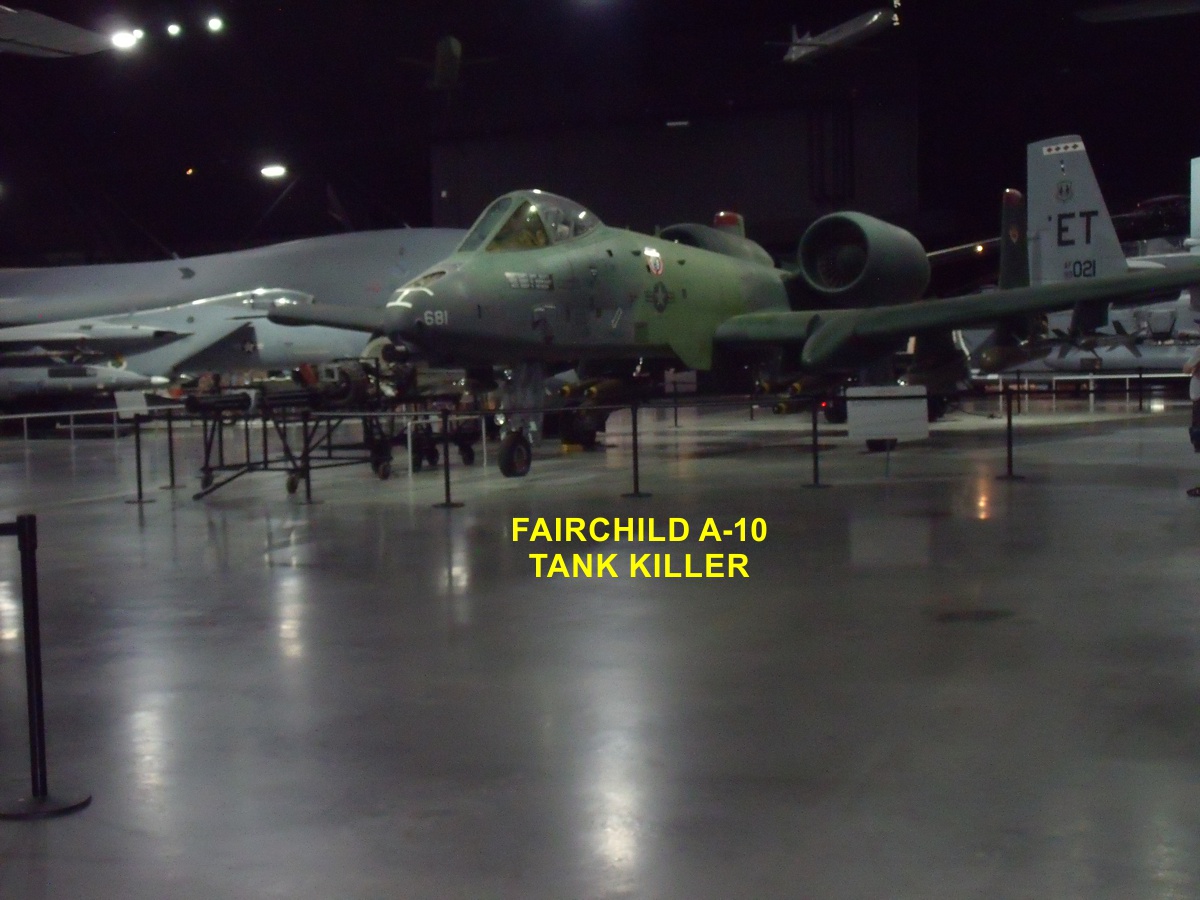 This airplane is not stealthy as it gets down in the fight and kills enemy tanks and trucks.  A few of these aircraft destroyed an Iraqi convoy trying to leave Kuwait in the first gulf war.  I took this photo. 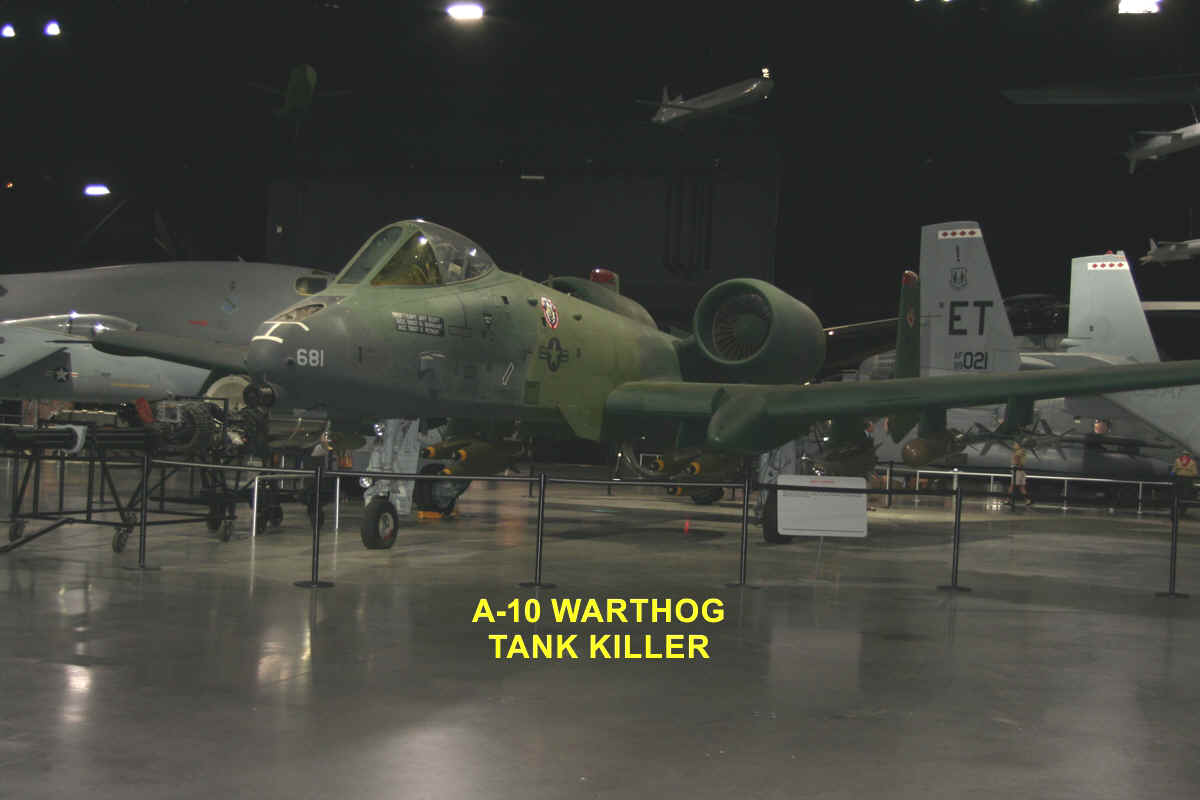 The very sturdy air frame was designed to carry this Gatling gun into battle.  The airplanes usually made it back to base with combat damage. The F-15 Eagle has been replaced by the F-22 Raptor.  Here is the data for this F-15:
https://www.nationalmuseum.af.mil/Visit/Museum-Exhibits/Fact-Sheets/Display/Article/196332/mcdonnell-douglas-f-15a-eagle/ 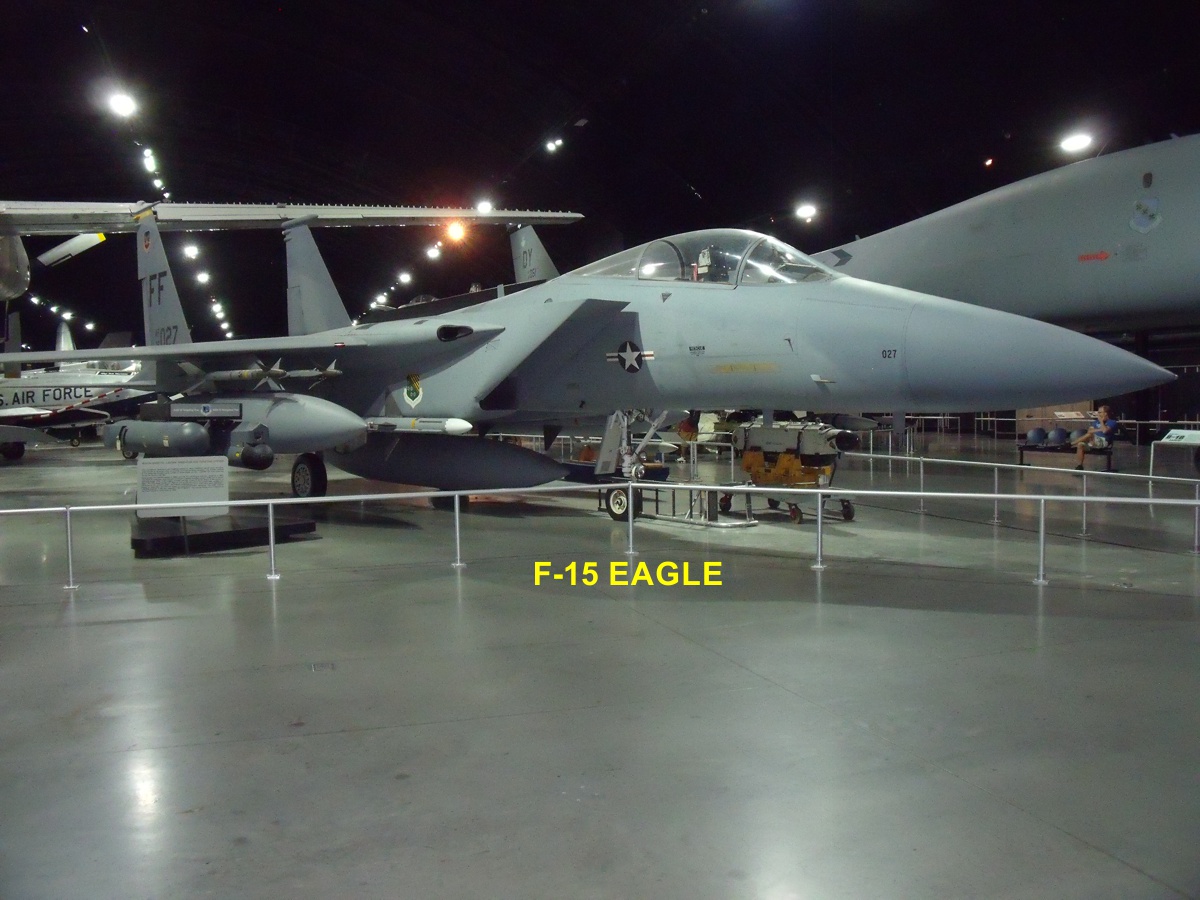 The photo below shows some of the items that can be mounted to the wings of the F-15 Eagle. 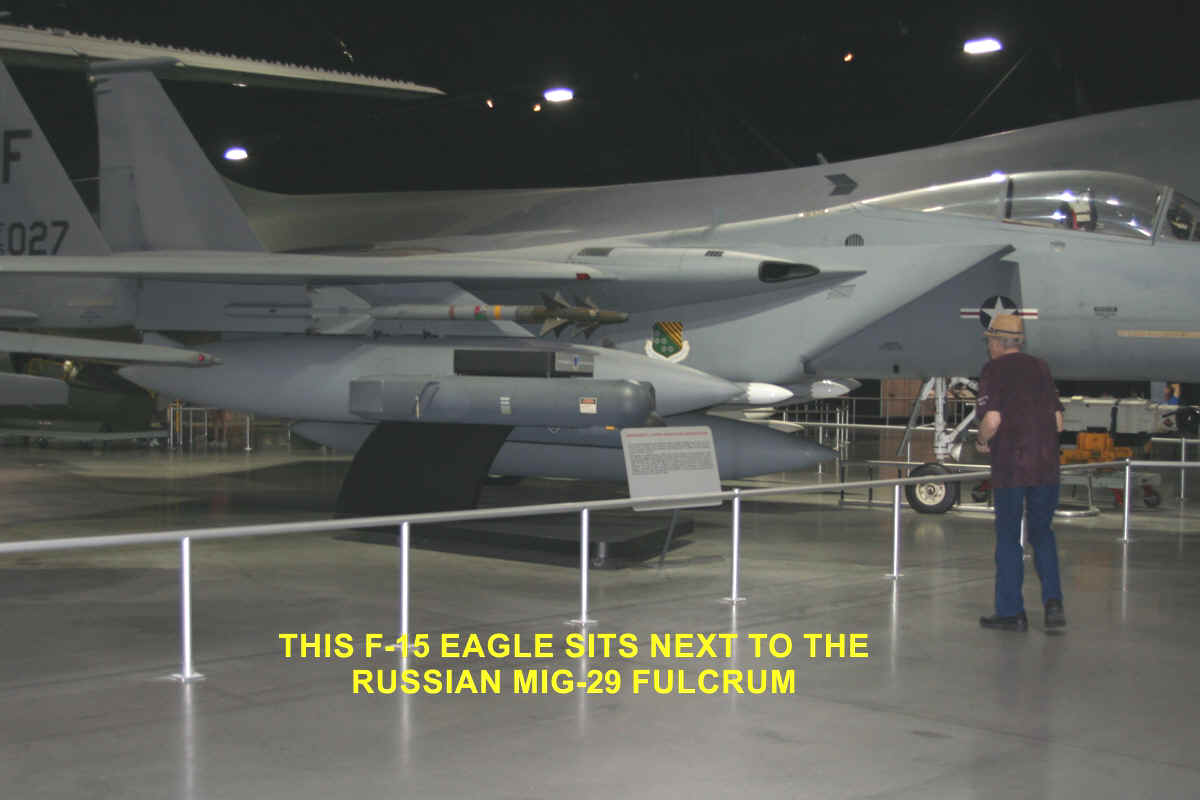 The B-1B supersonic bomber is a swing-wing design I have seen on the ramp at AirVenture.  Here is the web page with details about this aircraft:
https://www.nationalmuseum.af.mil/Visit/Museum-Exhibits/Fact-Sheets/Display/Article/198101/boeing-b-1b-lancer/ 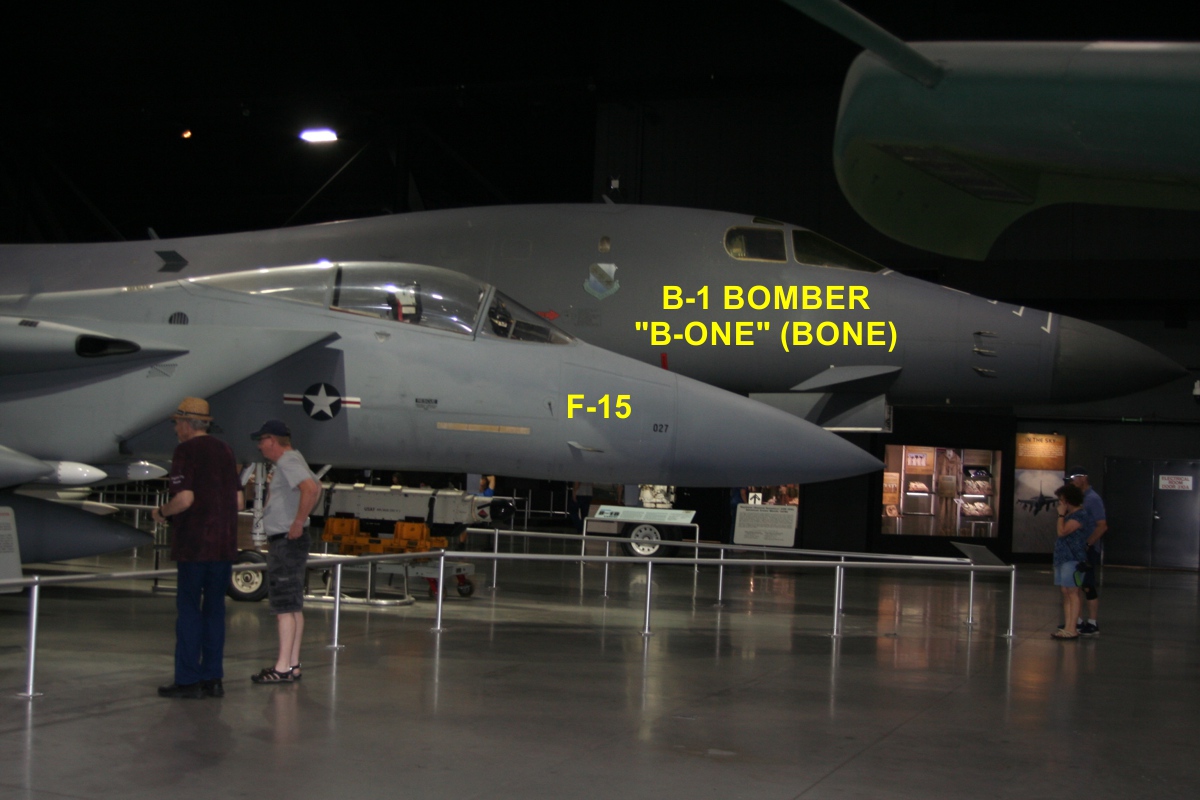 This Lockheed AC-130A Spectre gunship saw duty during the first Gulf War on February 26, 1991.  The details are in this USAF Museum web page:
https://www.nationalmuseum.af.mil/Visit/Museum-Exhibits/Fact-Sheets/Display/Article/196341/lockheed-ac-130a-spectre/ 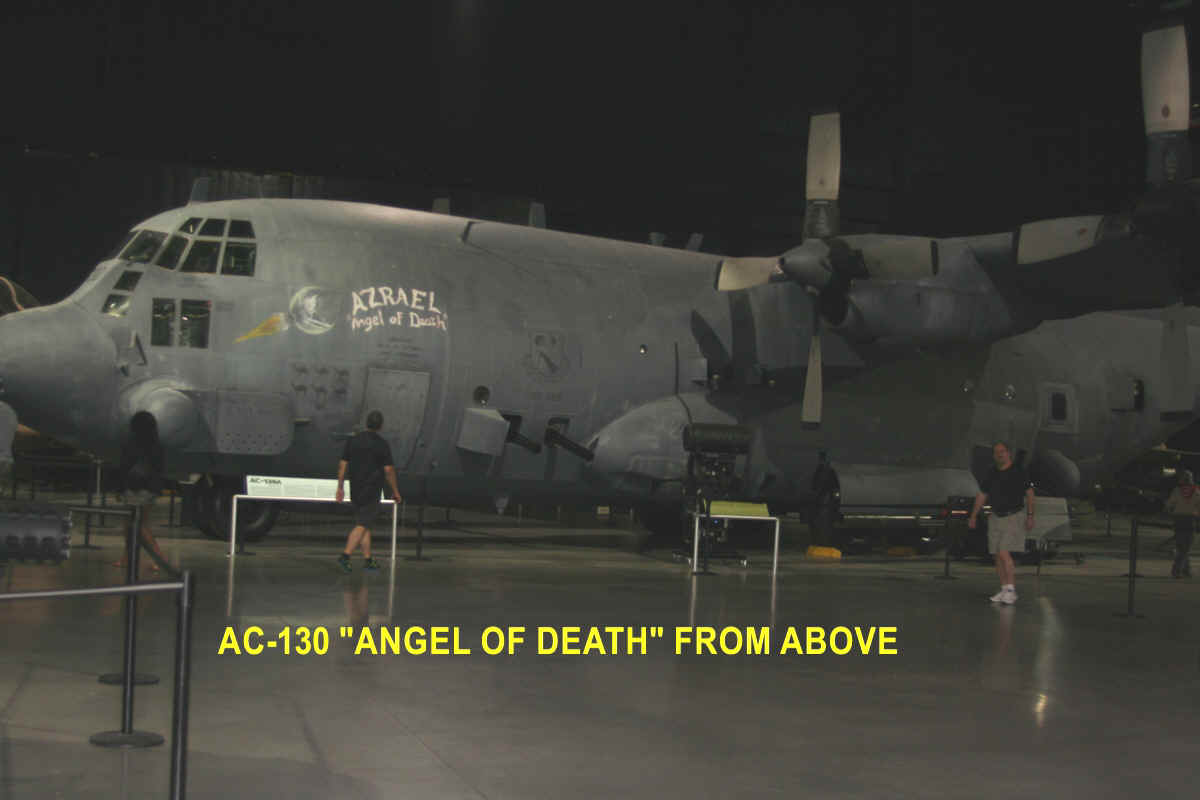