July 27, 2019: This is one of the big days of our trip to the mid-western states.  We have come to the BEST aviation museum in the USA! 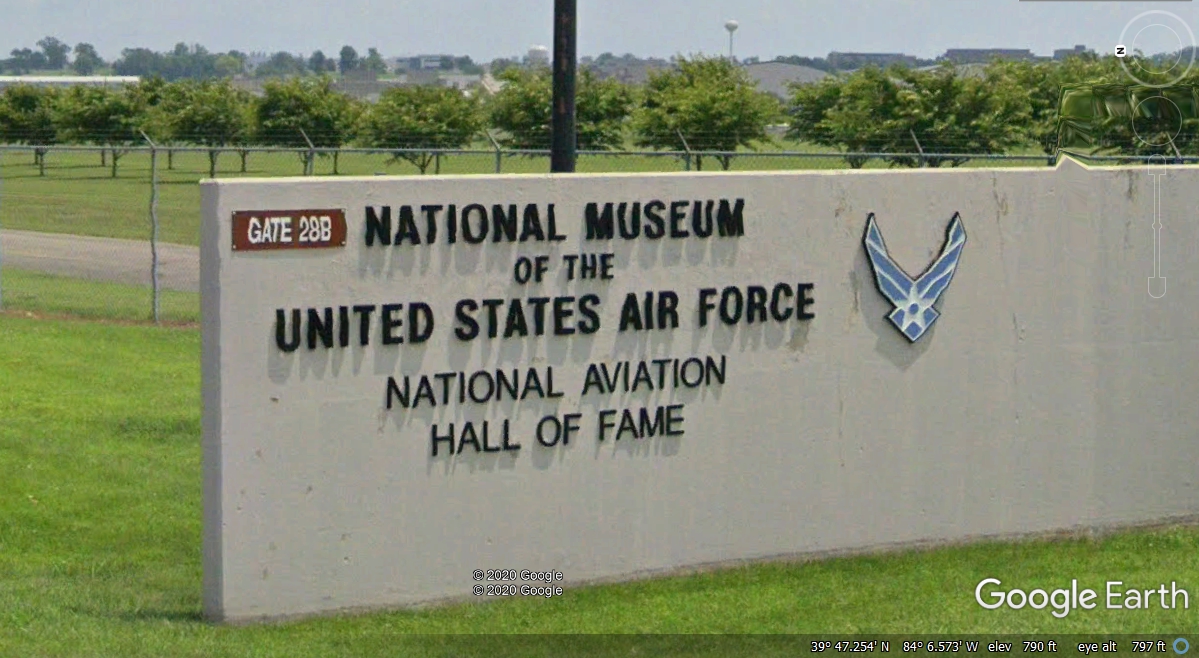 Google Earth got this view from outside the fence in front of the museum.  All the hangars for the museum are shown. 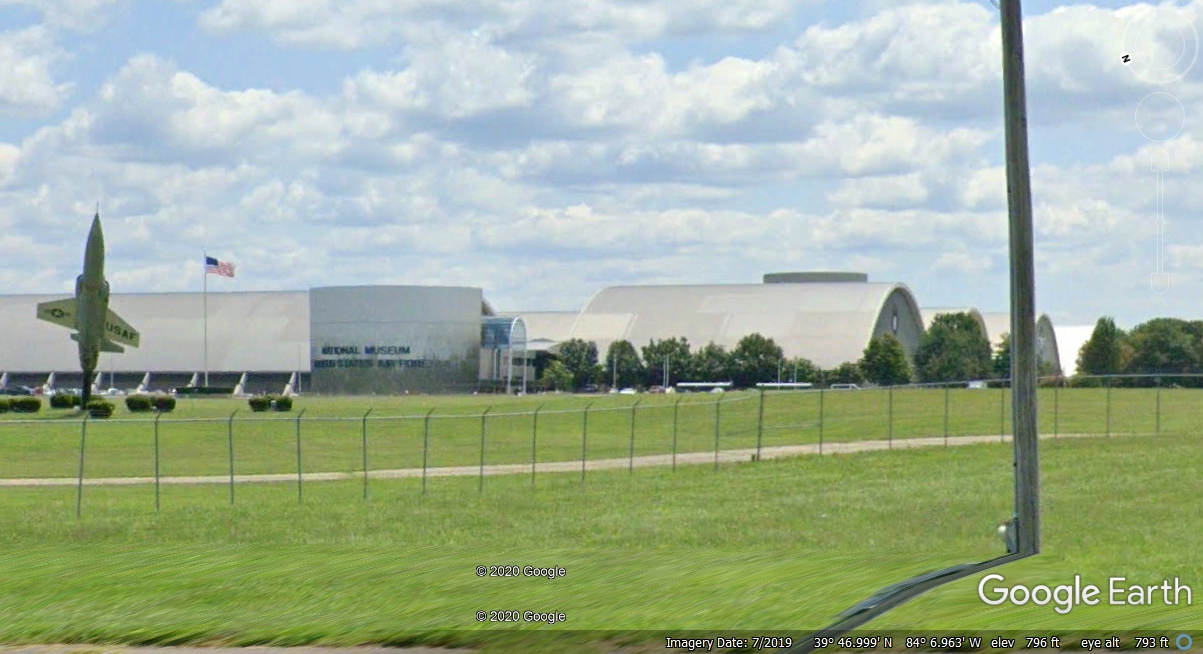 It appears the same Google vehicle captured the side view of the Lockheed F-104 Starfighter. 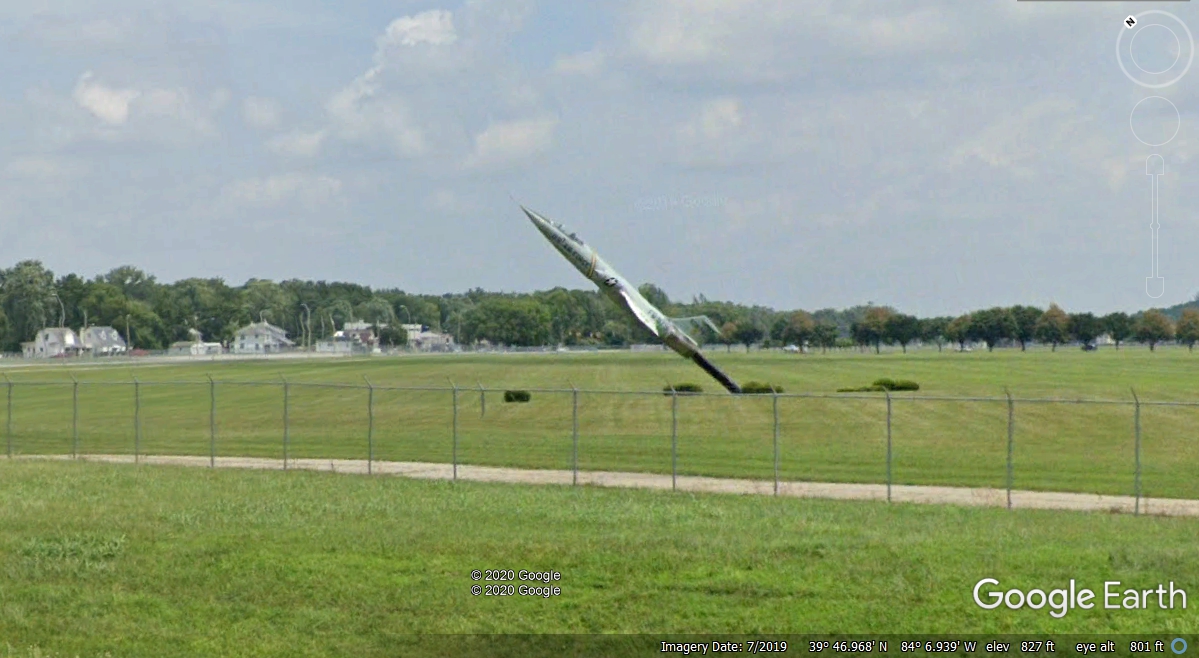 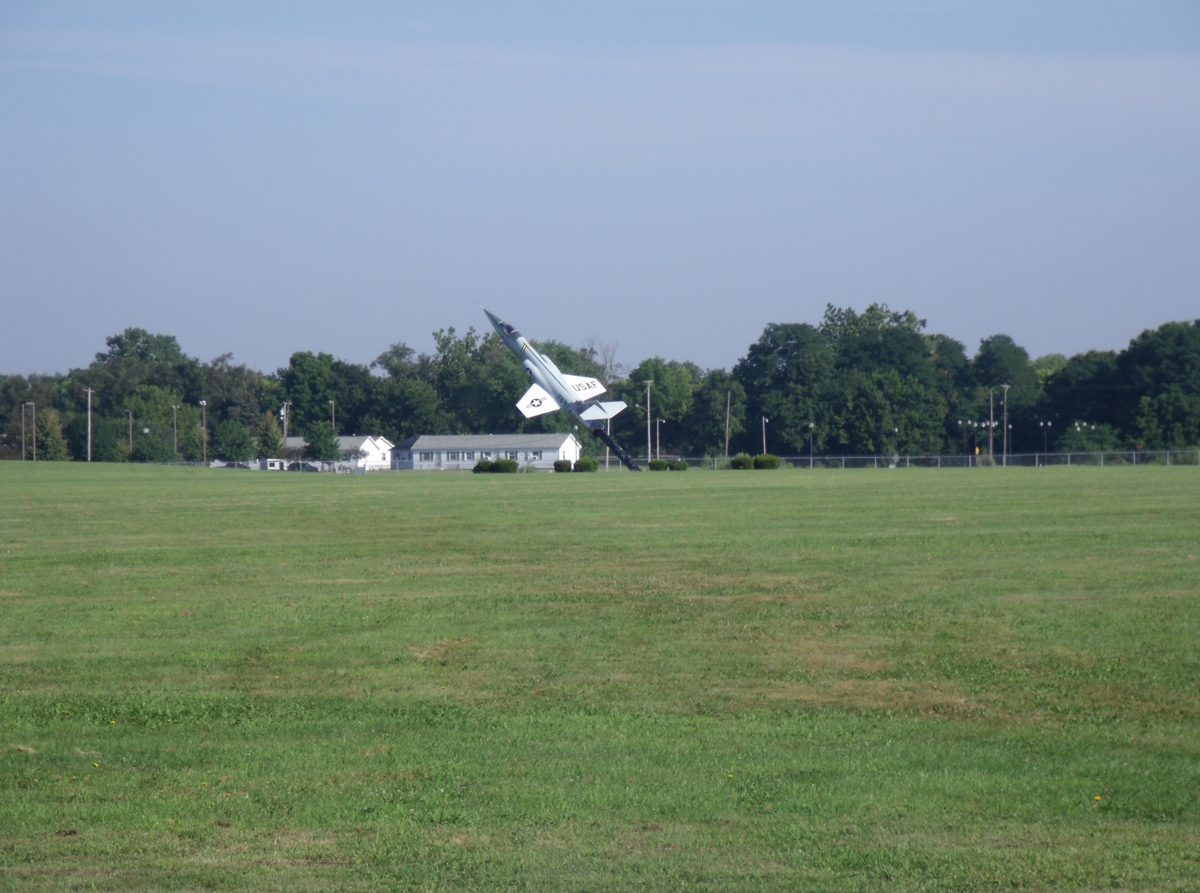 Here is the map of the buildings from their web site. 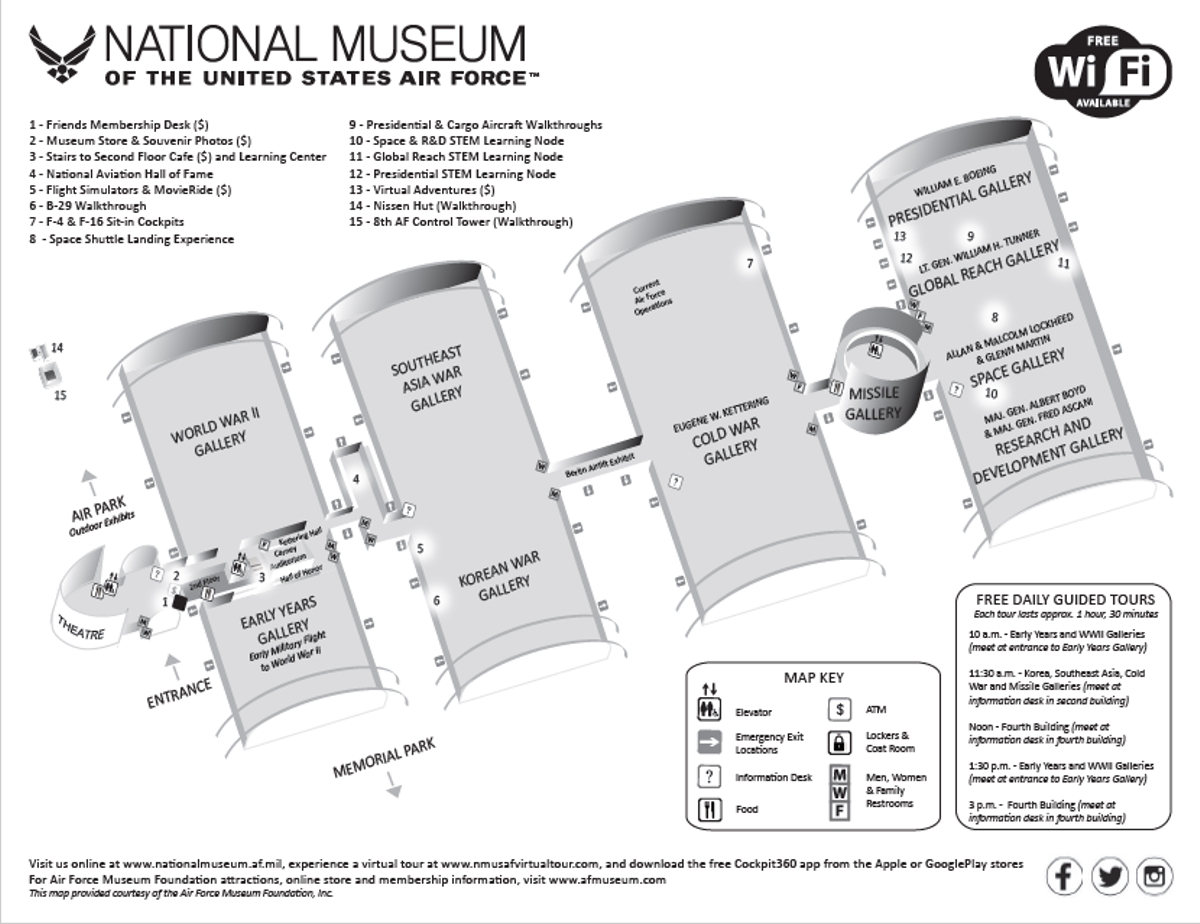 Linda took this photo of a mural as her first photo inside the museum.  Since the words are not legible in this image, I went to her original high resolution photo from her camera and posted the next image below this one with more details visible. 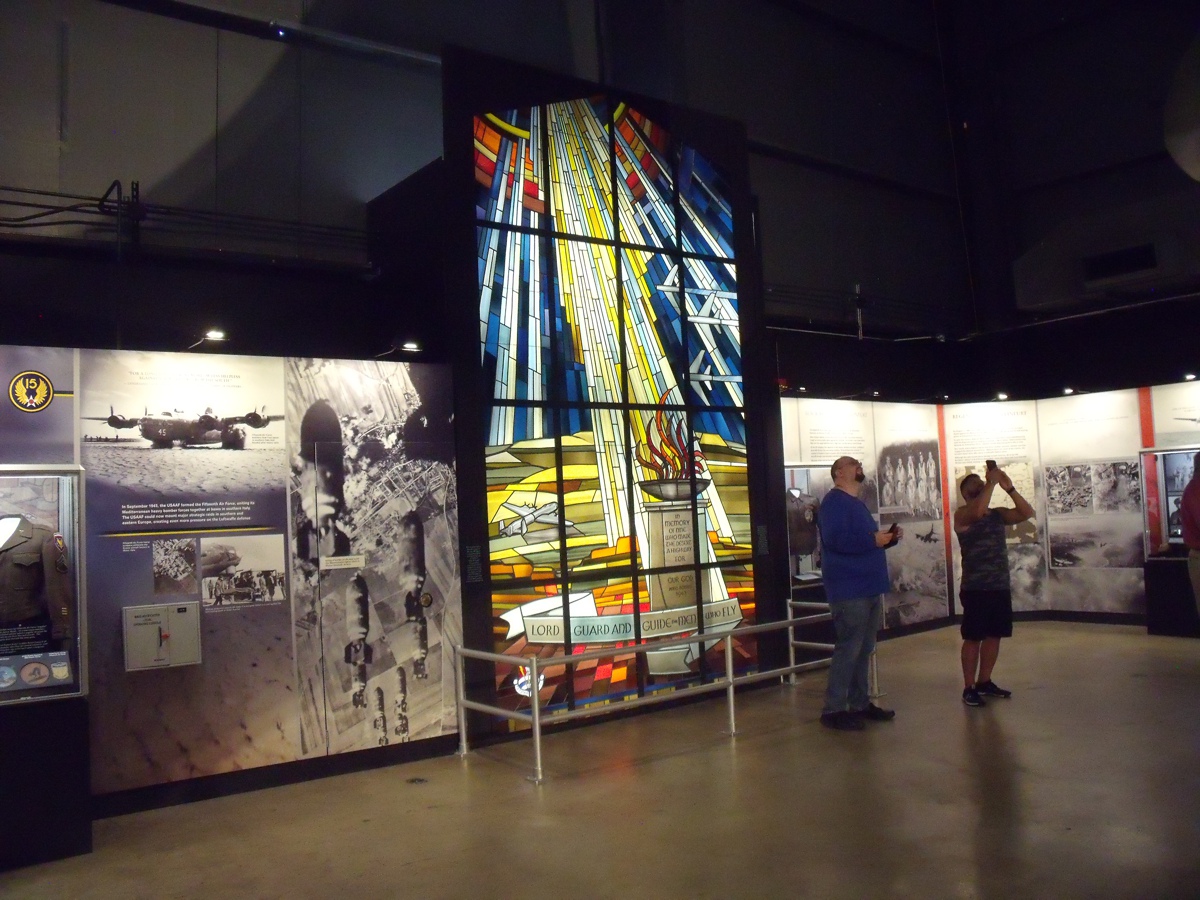 It is an eternal flame and a 1941 prayer for pilots in a stained-glass image. 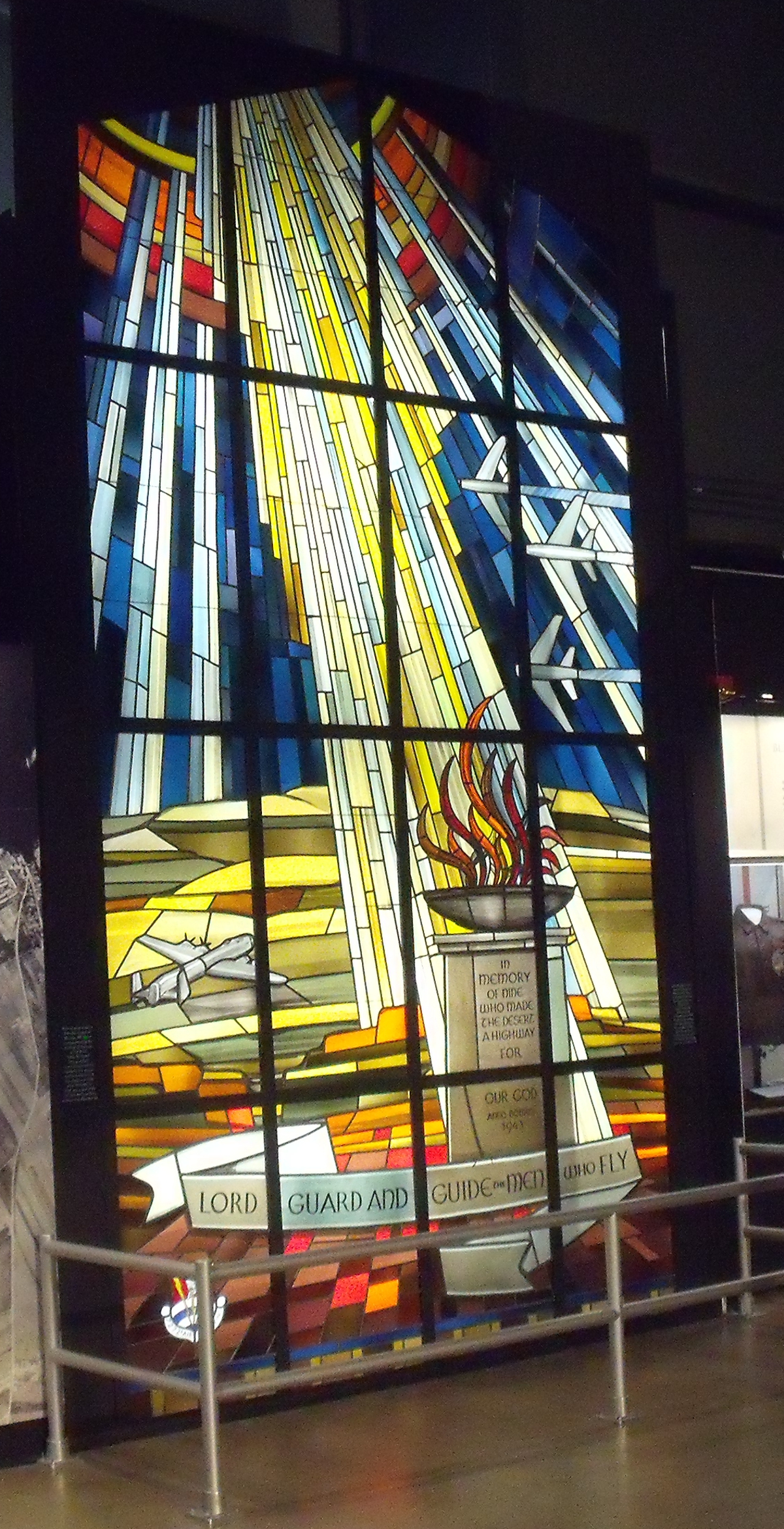 Linda took the photo below of information about the Caquot Type R Observation Balloon.  Unfortunately, her camera did not get the sign in good focus.  Fear not, as the US Air Force Museum has provided the full text of this sign on their web site via this LINK:   https://www.nationalmuseum.af.mil/Visit/Museum-Exhibits/Fact-Sheets/Display/Article/197400/caquot-type-r-observation-balloon/

Tethered balloons allowed World War I observers to see as far as 40 miles behind enemy lines to spot troop movements, chart trench systems and direct artillery fire. The observation balloon most used by Americans was named for its designer, French engineer Lt. Albert Caquot. The hydrogen-filled balloon could lift two passengers in its basket, along with charting and communications equipment, plus the weight of its mooring cable, to a height of about 4,000 feet in good weather. Normal operations were between 1,000 and 4,000 feet. During WWI, American balloon observers directed artillery fire at targets such as troop concentrations and supply dumps. They noted more than 1,000 enemy airplane sightings, 1,000 instances of military traffic on railroads and roads and 400 artillery batteries.

Caquot balloons were manufactured in great numbers in WWI; nearly 1,000 were made in the United States in 1918-1919. During World War II, the British produced Caquots once again, but in limited numbers. Manufactured in 1944, the balloon displayed at the museum is believed to be the only survivor. The British used it for parachute testing and non-combat aerial observation and photography until 1960. The British Ministry of Defense, Royal Aircraft Establishment, presented the Caquot to the museum after it was located with the aid of American and British WWI balloon veterans in 1975. Assisted by the Goodyear Aerospace Corp. of Akron, Ohio, which had produced these balloons during WWI, museum personnel mended and sealed the balloon fabric and prepared it for inflation. It was placed on display in May 1979. 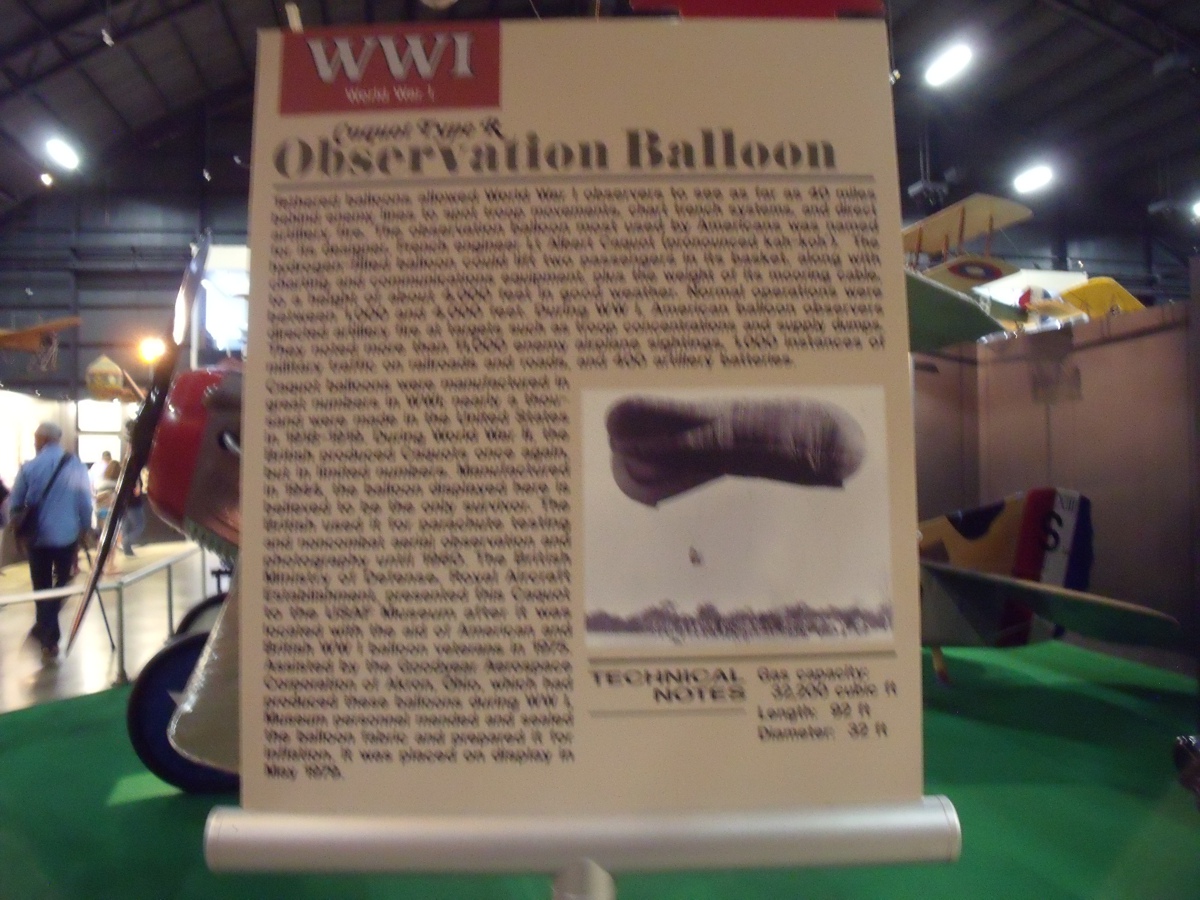 Here is her photo of the balloon displayed above the sign. 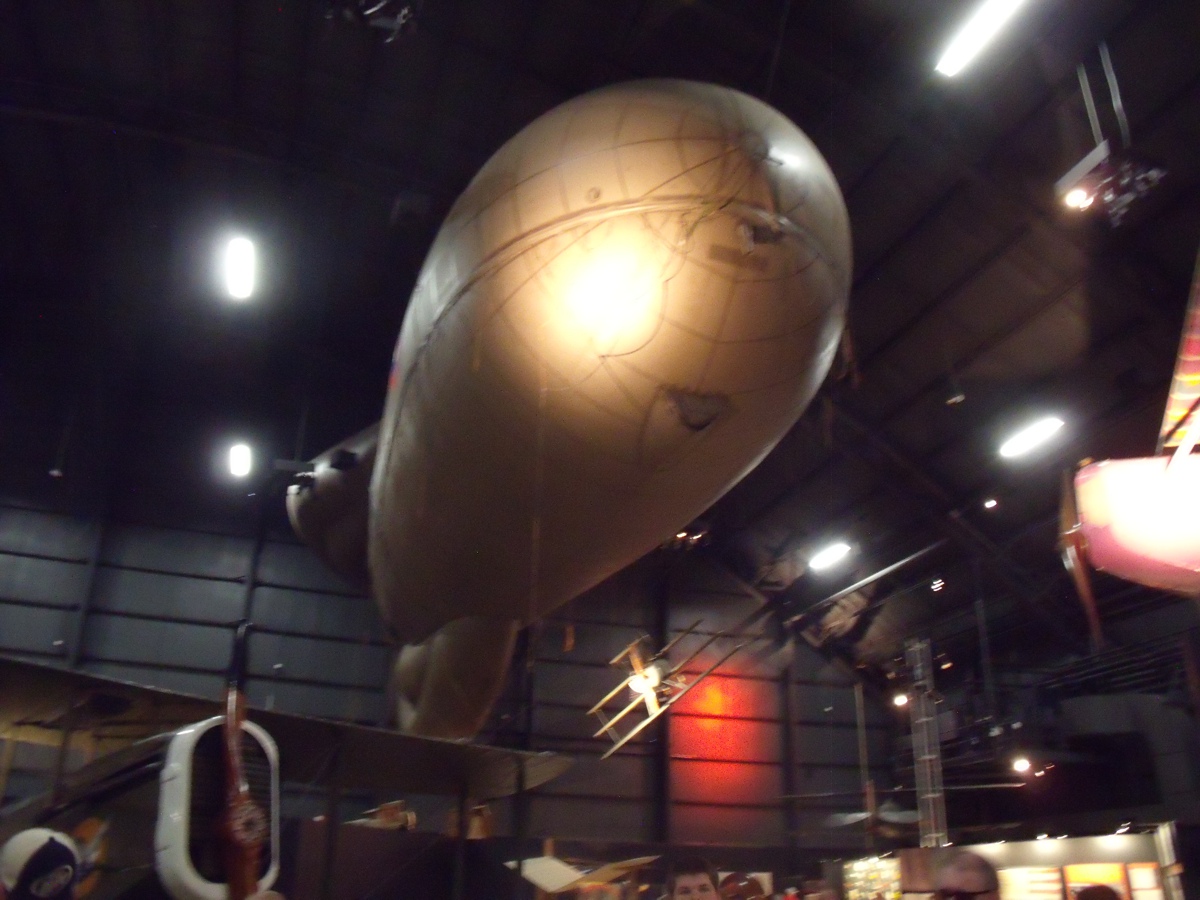 The balloon flew with a two-man crew.  One of them had headphones and a microphone to talk to artillery crews on the ground.  This hangar near the front entrance of the museum is about early flight and World War 1. 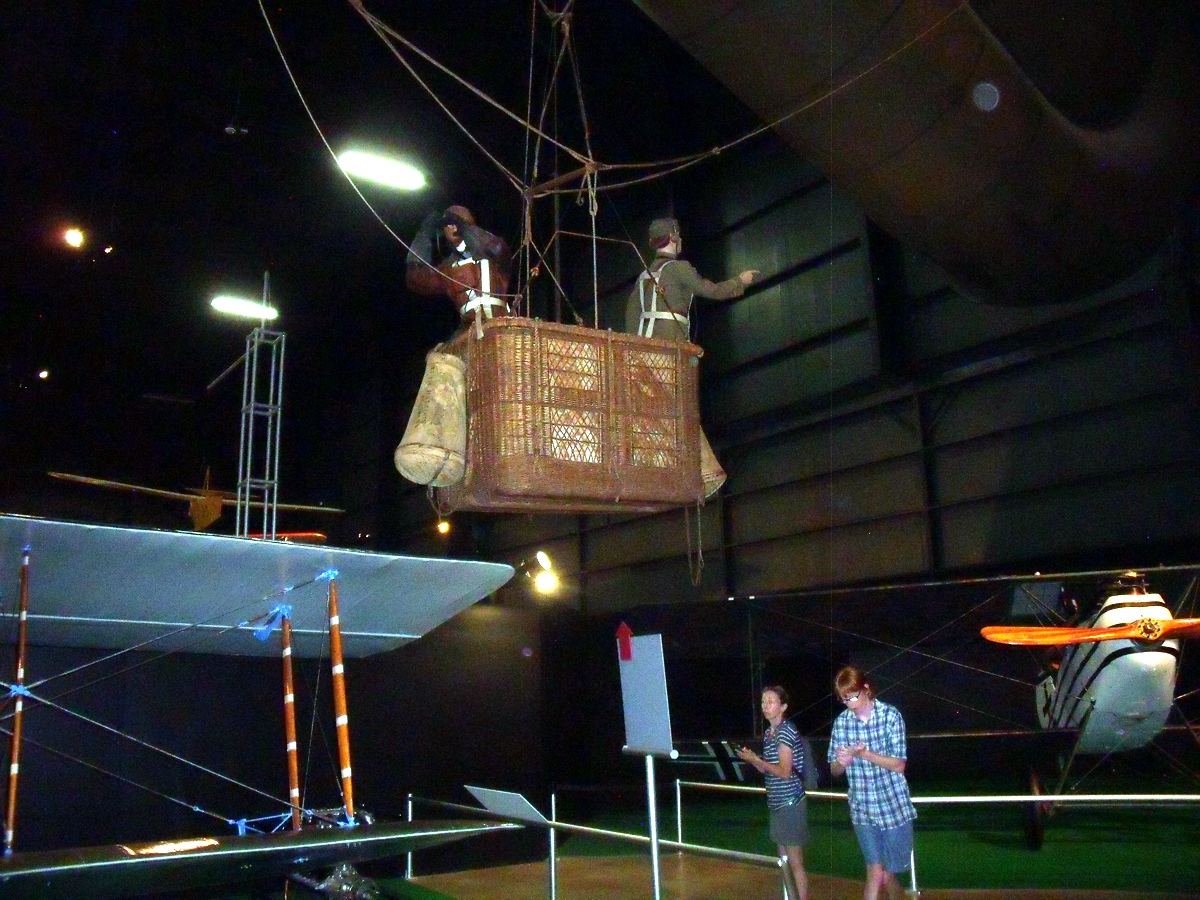 If you saw the 1956 movie "Strategic Air Command" you had a chance to see a B-36 Bomber in flight.  The large wing with three propellers and two jet engines on each wing is part of the B-36 at the USAF Museum.  This image taken by Linda is also about a pair of P-51 Mustang fuselages connected together to become the F-82 fighter:  https://www.nationalmuseum.af.mil/Visit/Museum-Exhibits/Fact-Sheets/Display/Article/196411/north-american-f-82b-twin-mustang/ 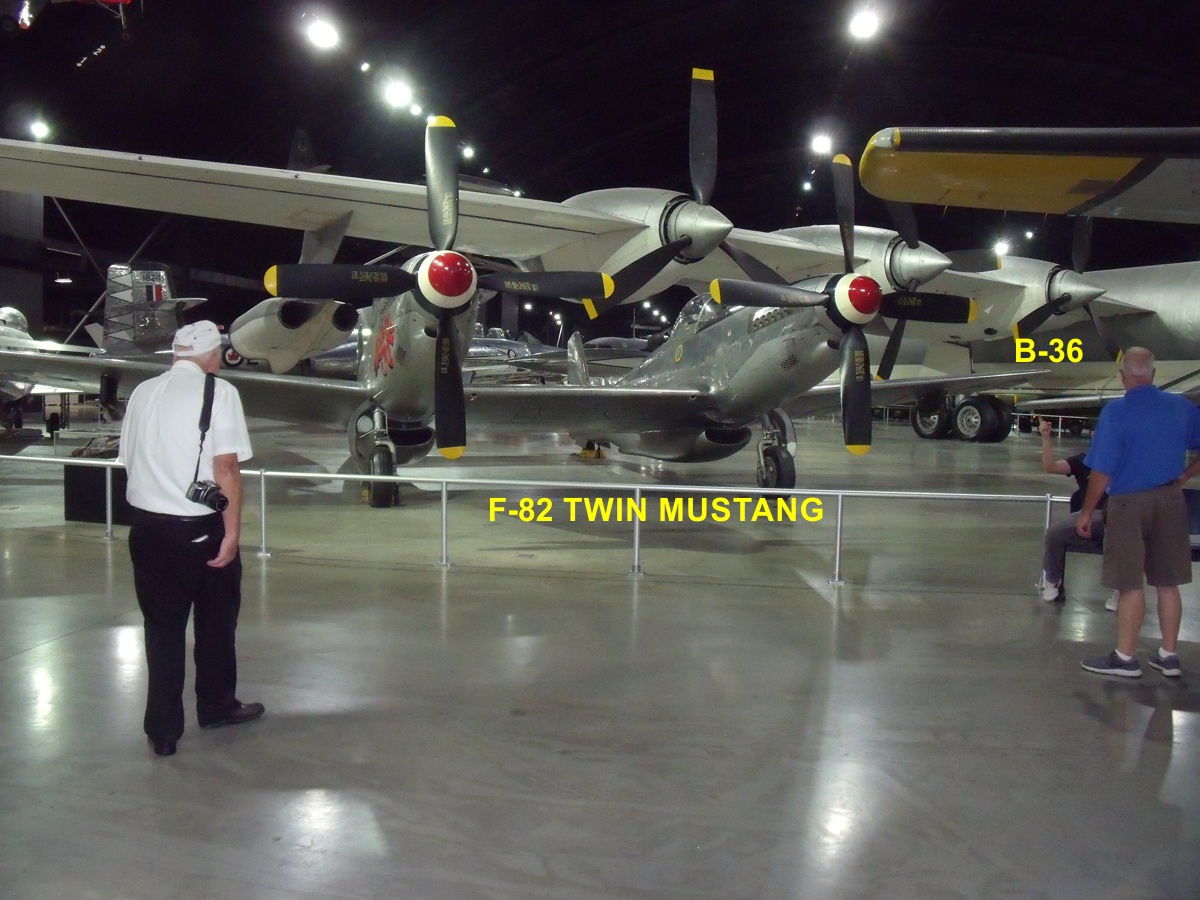 I provided the YELLOW labels on many photos taken this day at the museum.  The F-82 was the last propeller driven fighter used by the USAF before the Jet Age arrived! 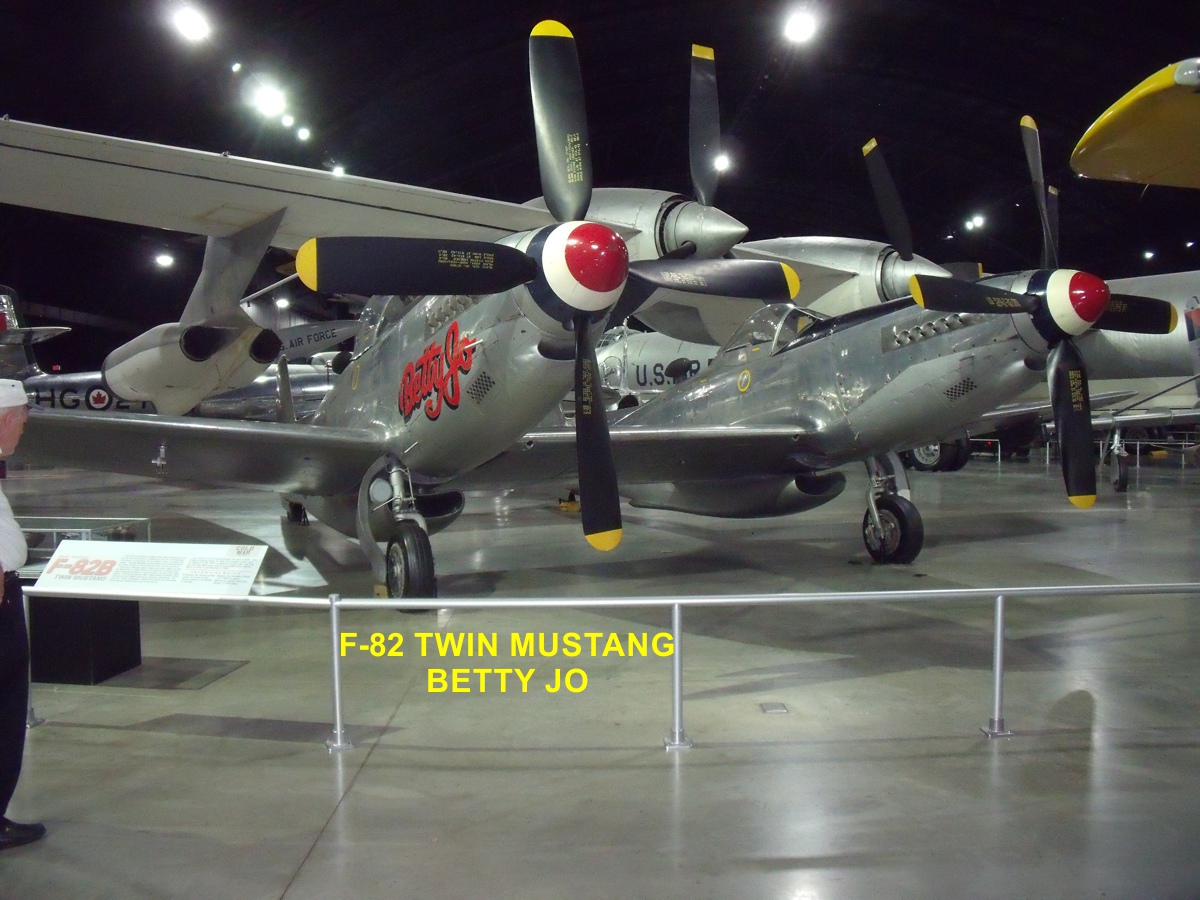 This F-86 Sabre Jet is stripped bare to show much of what made it a great fighter aircraft during the Korean War. 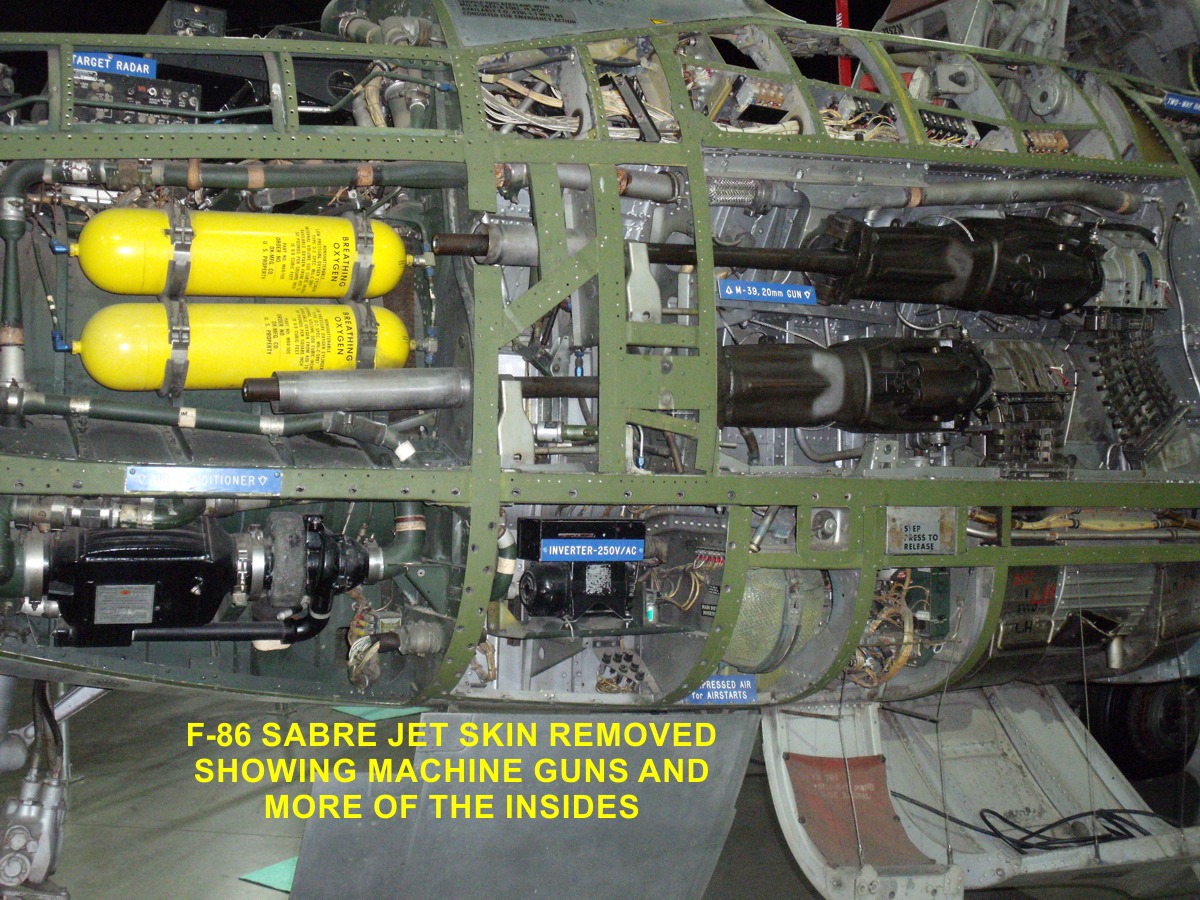 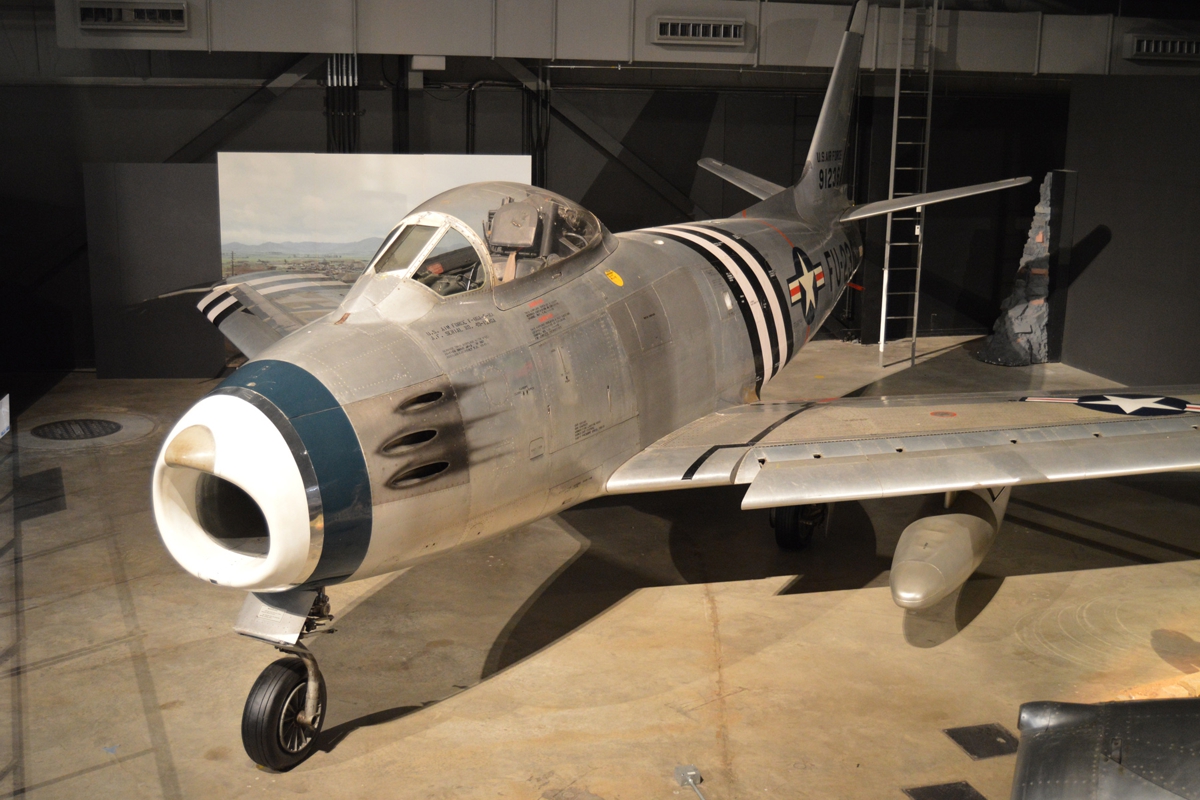 This is how a properly-dressed F-86 looks.

This image is dominated by the Douglas C-124 Globemaster II cargo plane.  The Korean War Gallery is that section beyond the Global Hawk seen hanging from the ceiling in the foreground of this image.  Here is the data for the C-124: https://www.nationalmuseum.af.mil/Visit/Museum-Exhibits/Fact-Sheets/Display/Article/196101/douglas-c-124-globemaster-ii/ 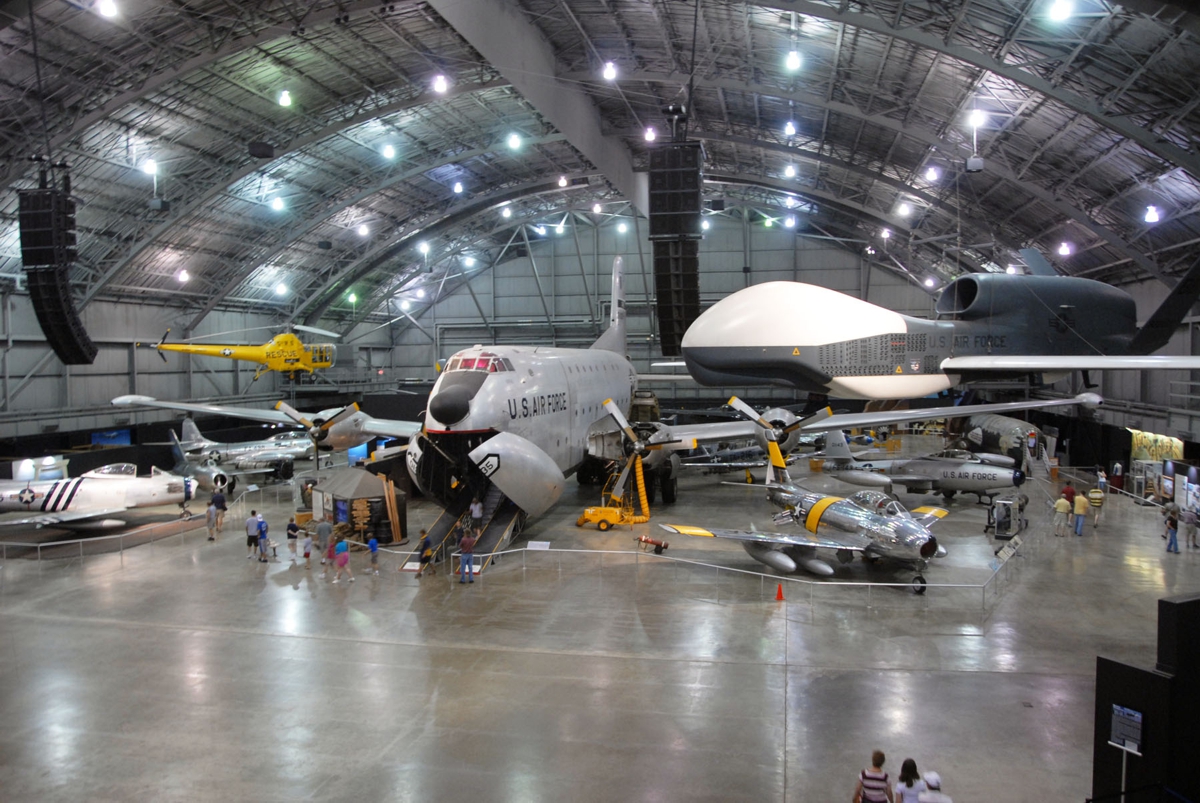 Here is the front of the B-36 in the museum.  Here are models of some types of atomic bombs that could be carried on the B-36.  This hangar is about military aircraft that were mass produced, not experimental planes. 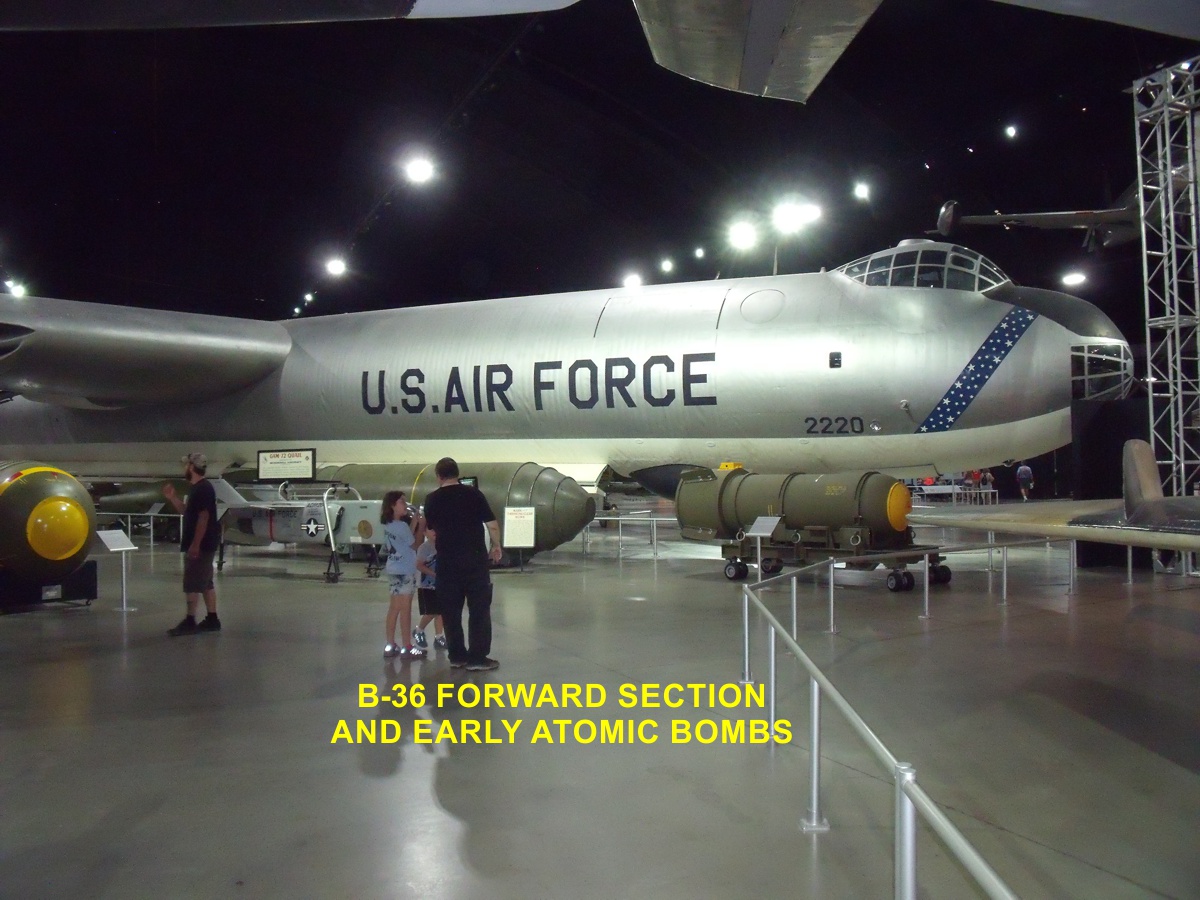 Since we talked about the B-36, lets take a look in the bomb bay. 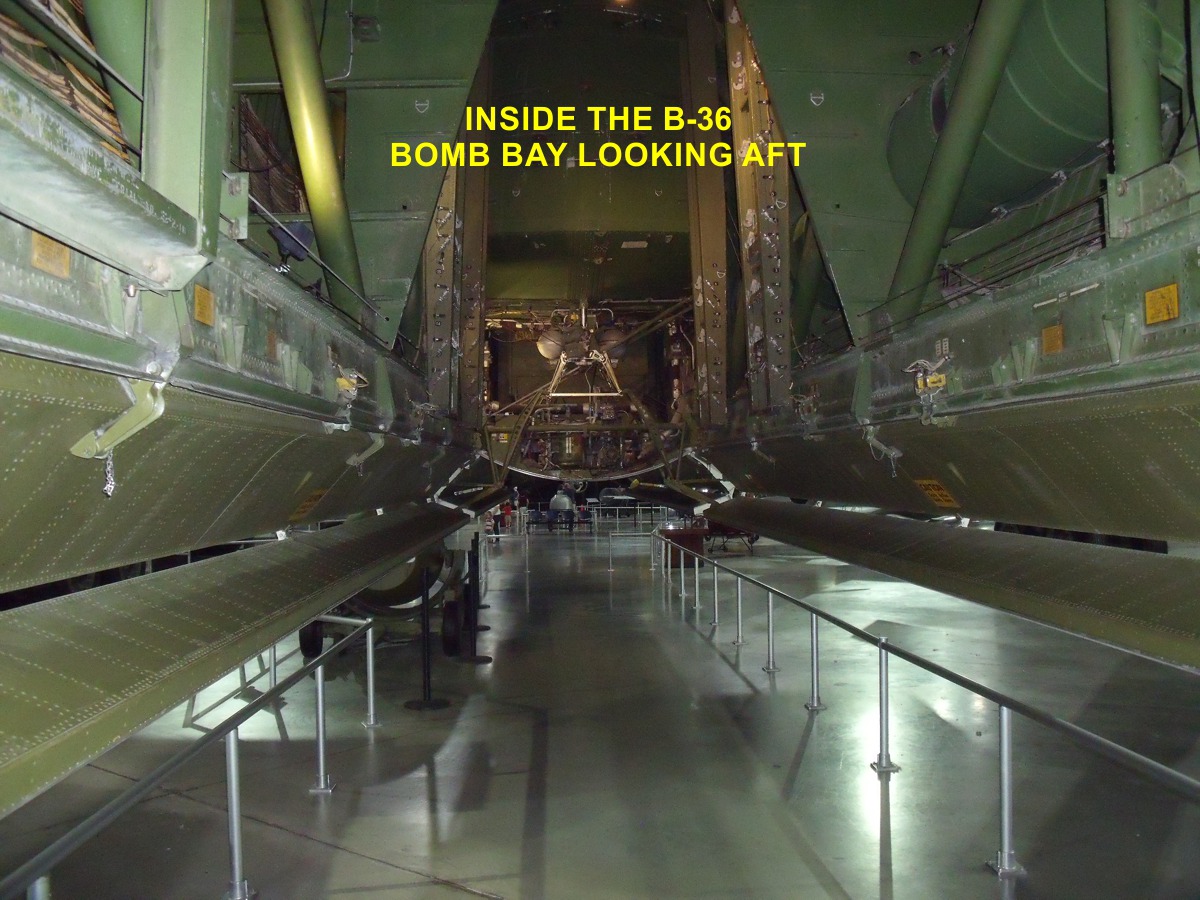 This view is from further away with a wider view of the bomb types.  That large black "bubble" at the top of this image is part of the belly of the B-47 you will see later. 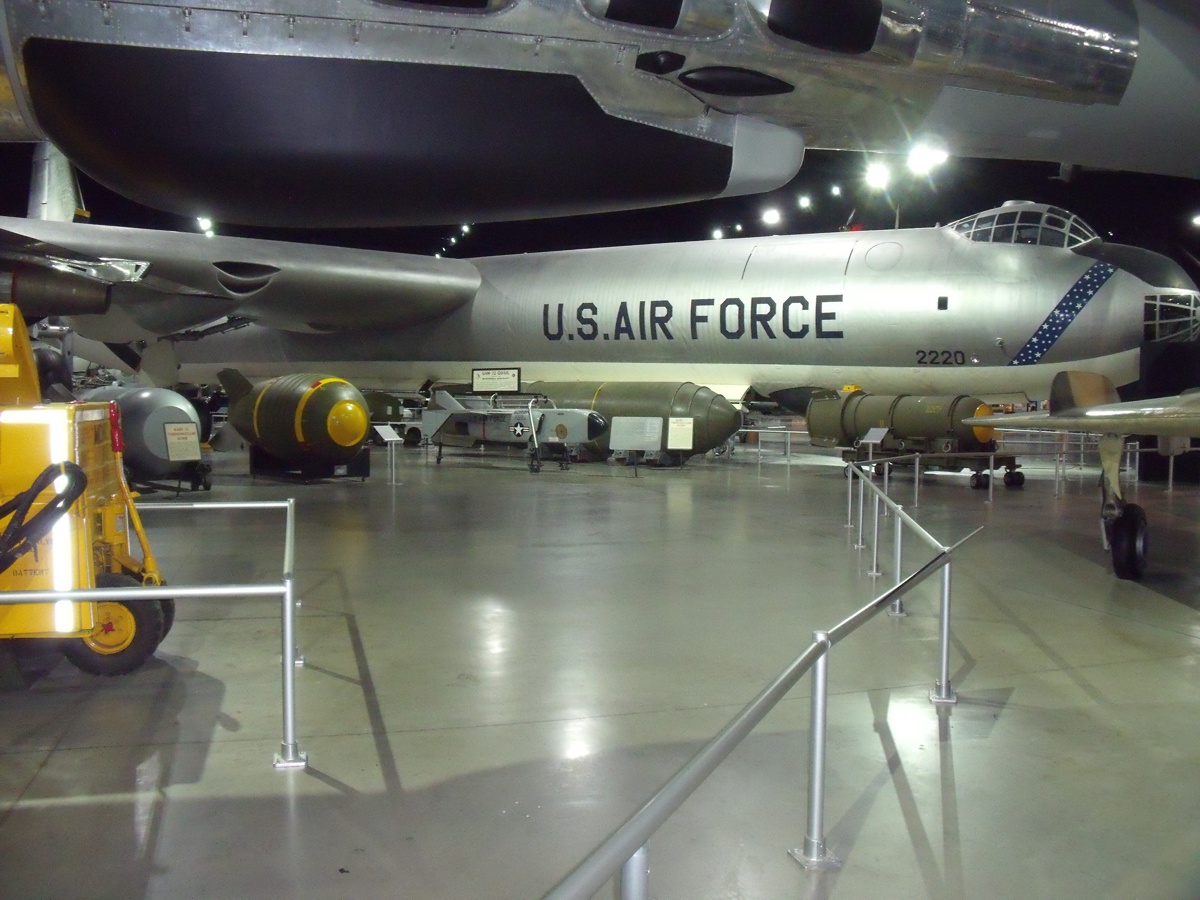 We were walking toward the last hangar with the newest displays.  Along the way the route is through an area with satellites and ICBM's. 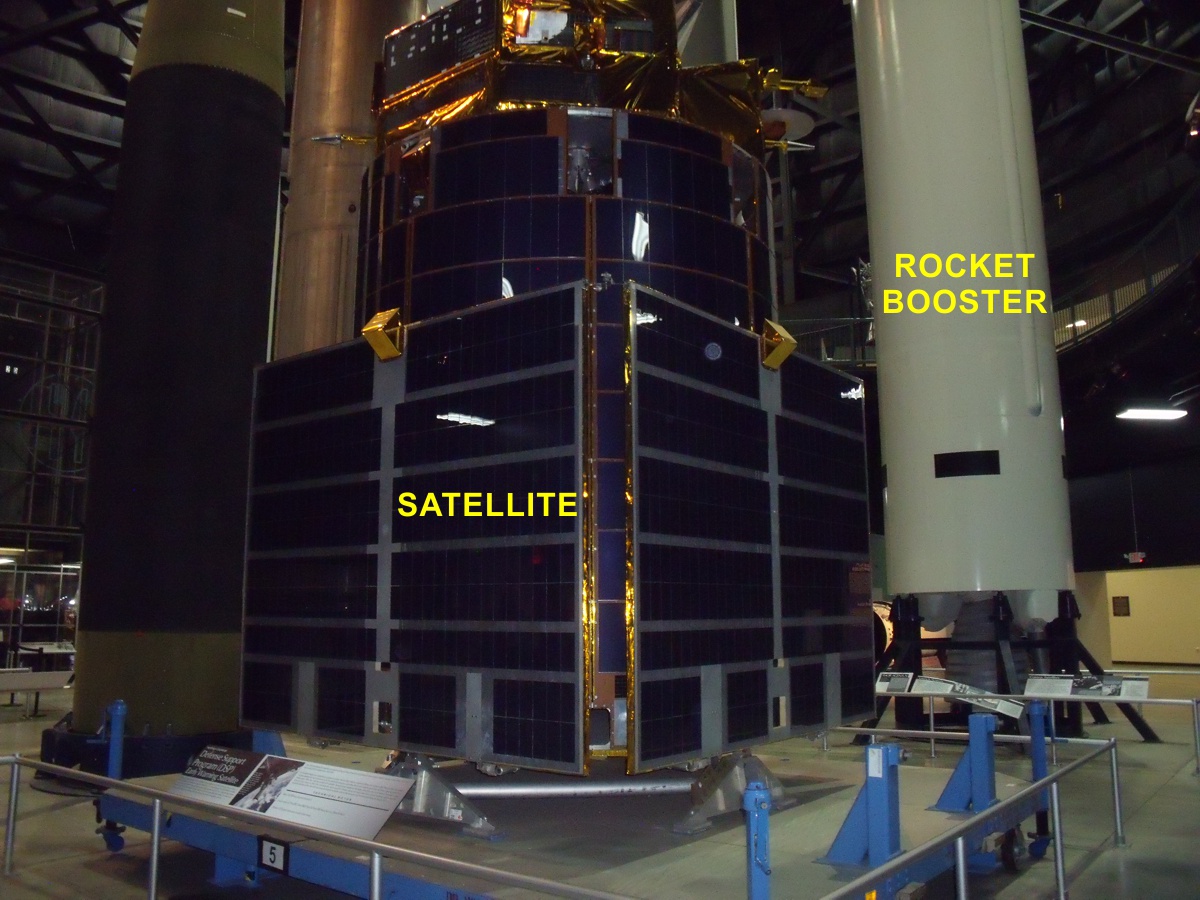 Linda focused her camera up high and did not notice the other lady until I posted these images to a web page on March 27, 2020.  These photos were taken on July 27, 2019. 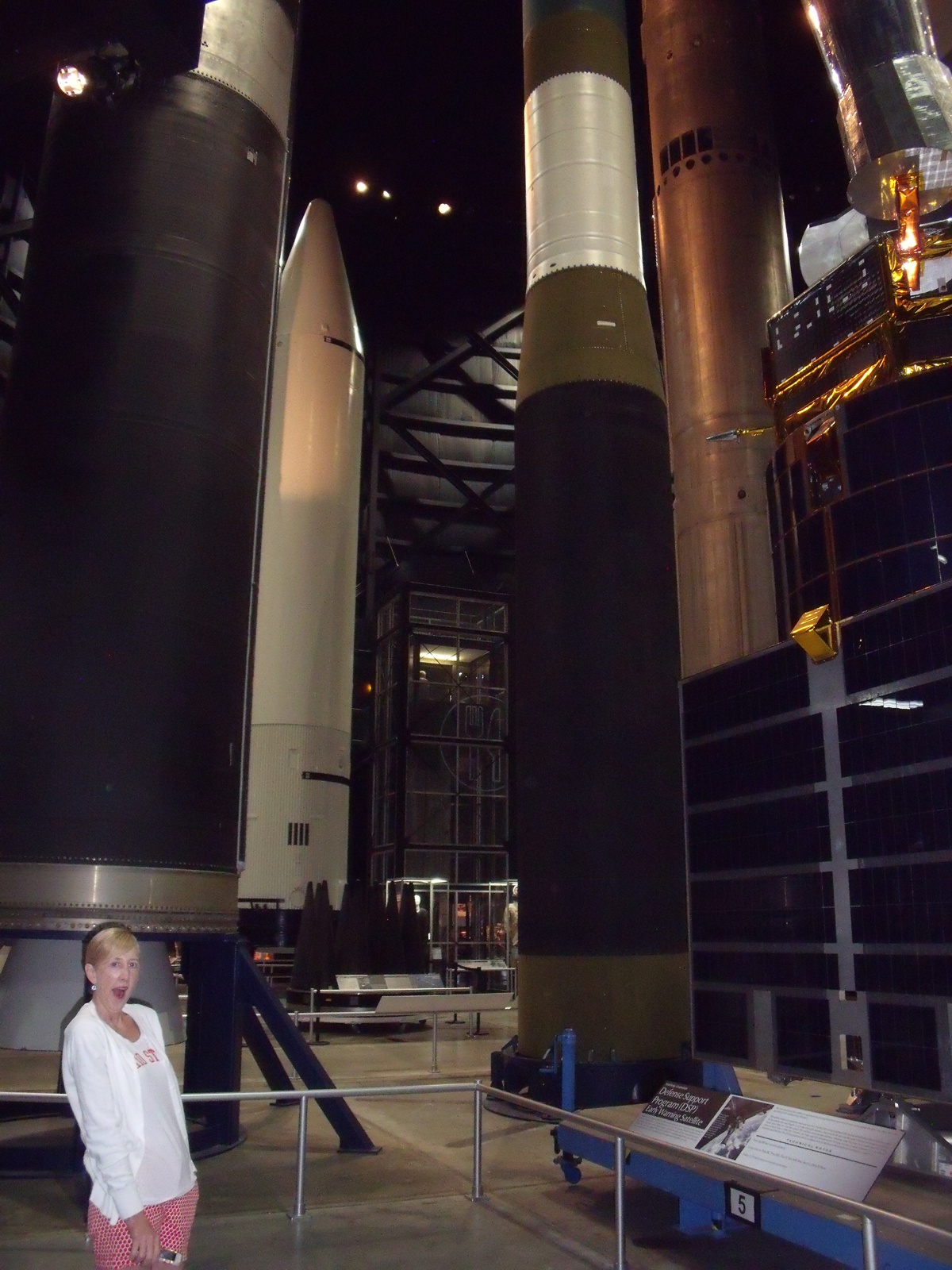