July 26, 2019:  This is a November 2016 view of Big Bay De Noc further East on US 2 on the road to Manistique, Michigan.  Lake Michigan is beyond where the land ends on the south side of the bay. 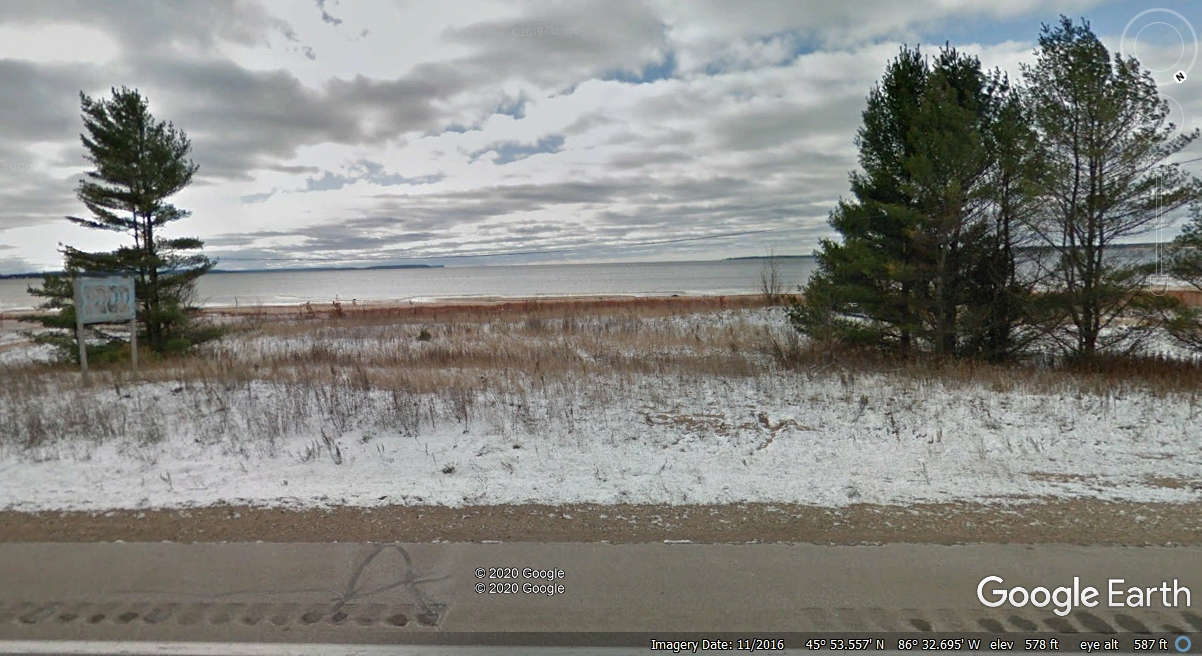 The county road ahead at Garden Corners goes south from US 2 along the eastern shore of Big Bay De Noc. 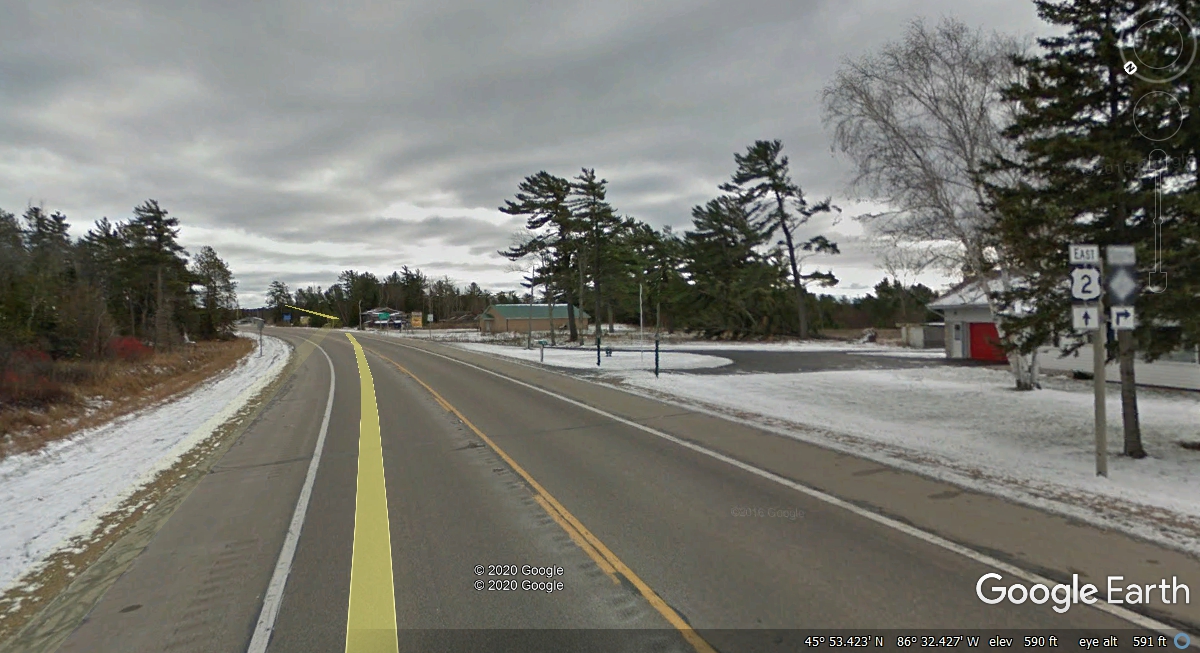 Finally, a view of Lake Michigan from US 2 about half way between Thompson and Manistique, Michigan.  Remember we passed this way in July 2019 as you will see from our pictures we took in Manistique.  All the images with snow were recorded by Google Earth vehicles in November 2016. 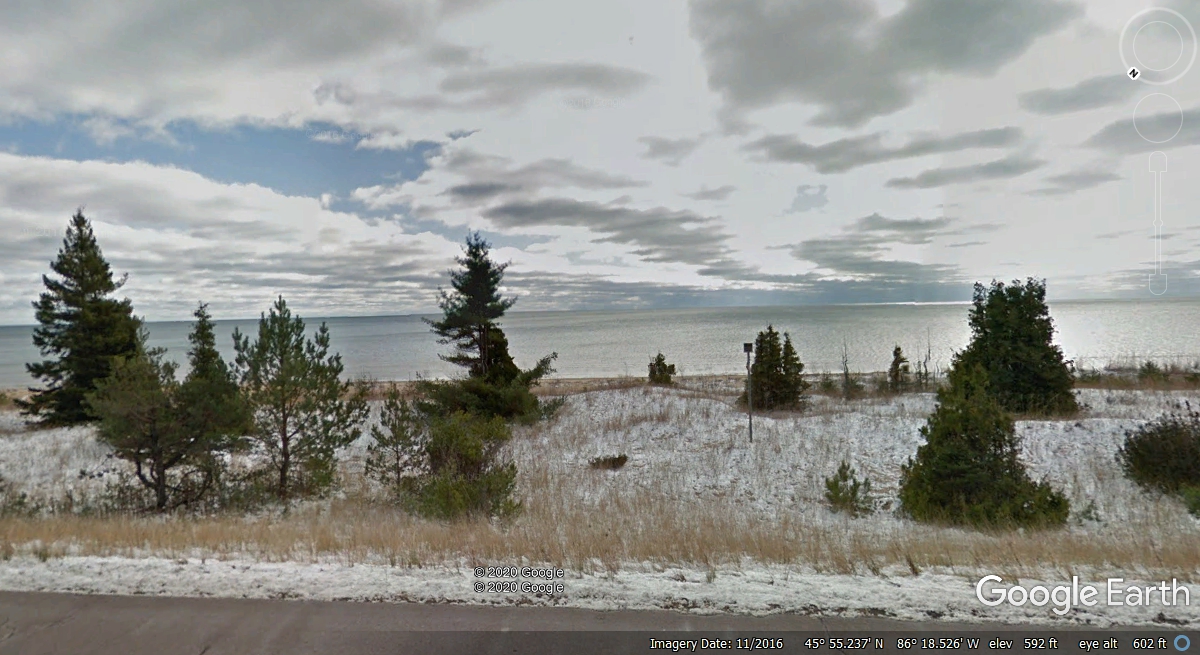 Here is the Aerial View of Manistique taken in May 2016.  It shows the hospital at the west side of town and the Airport at the East side of town. 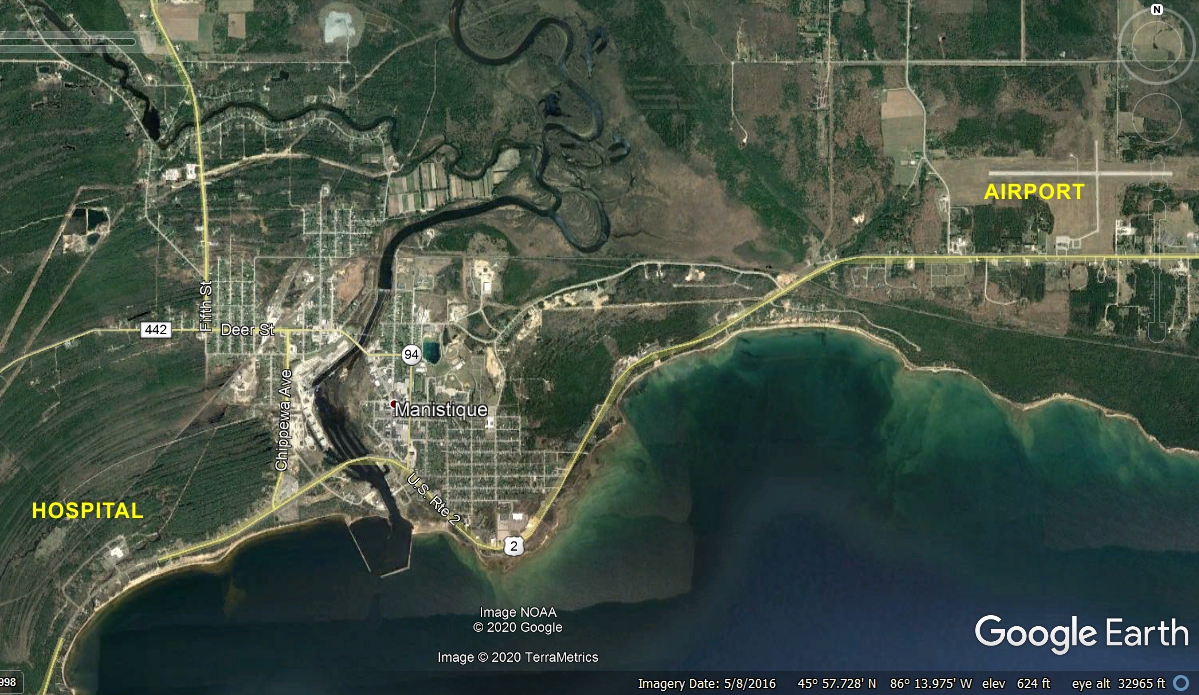 We did get off of US 2 in Manistique to drive through the business district and passed this location with a sign out front: "Schoolcraft County Historical Park & Water Tower."  This is one way to have a heated water tank that will not freeze in winter. 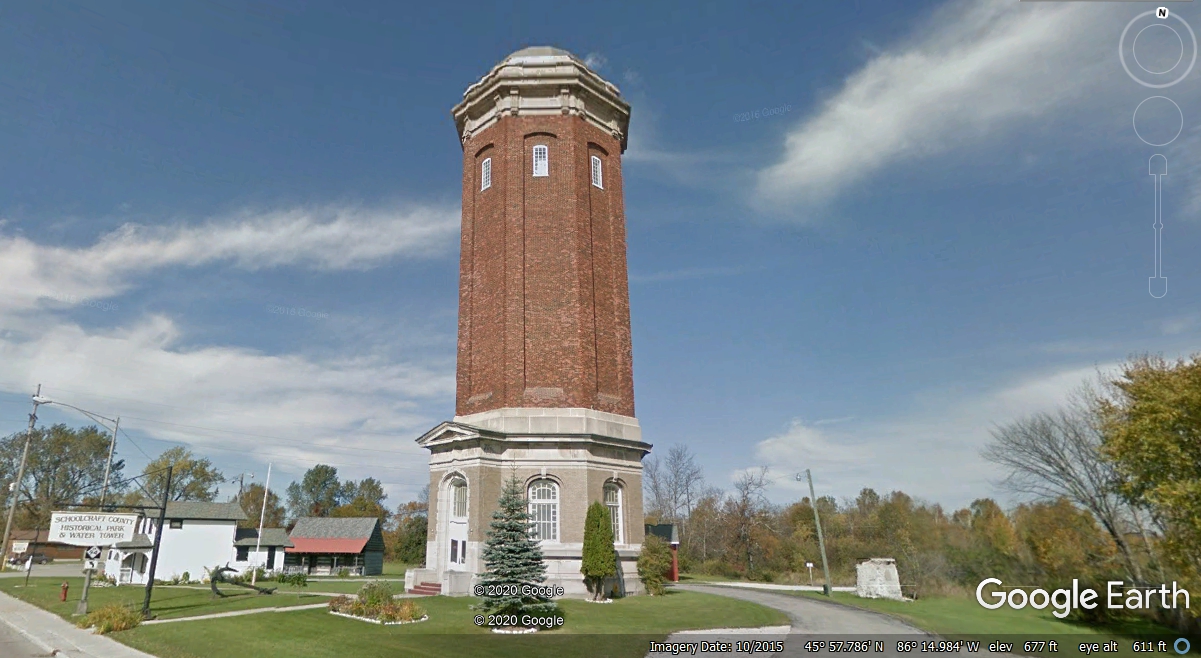 Here is the view looking north on Cedar Street past the US post office to the old store fronts with modern day clients located there. 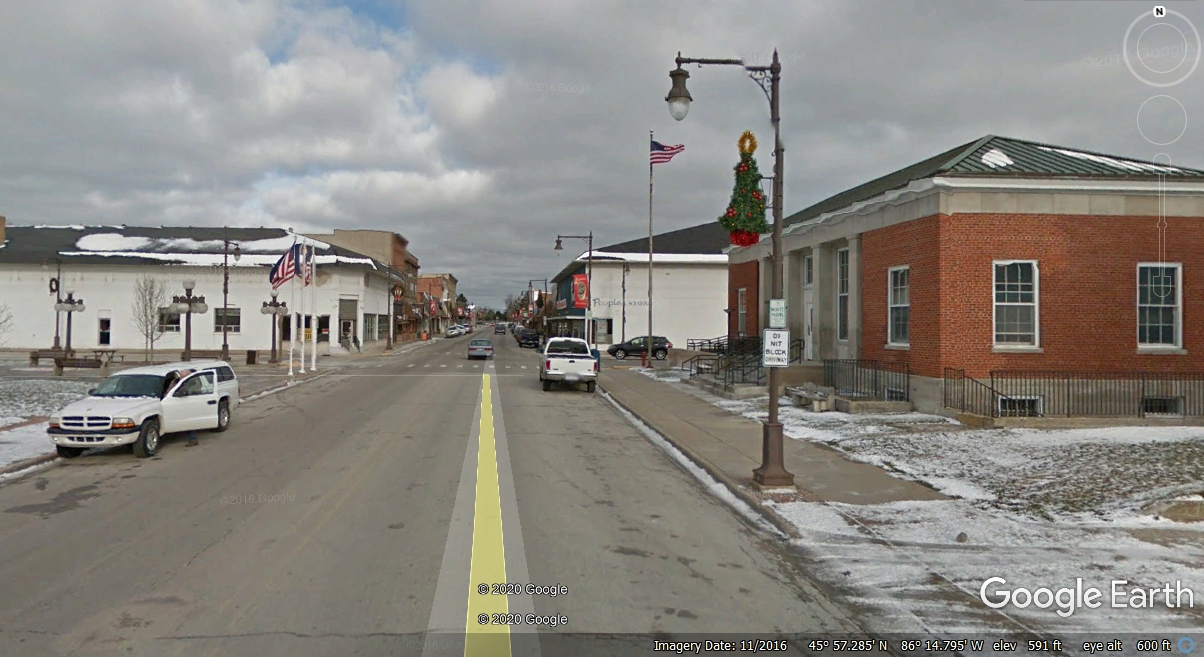 It was 10 AM when we first passed by this Big Boy restaurant.  We noticed a public park across the street with good views of Lake Michigan. 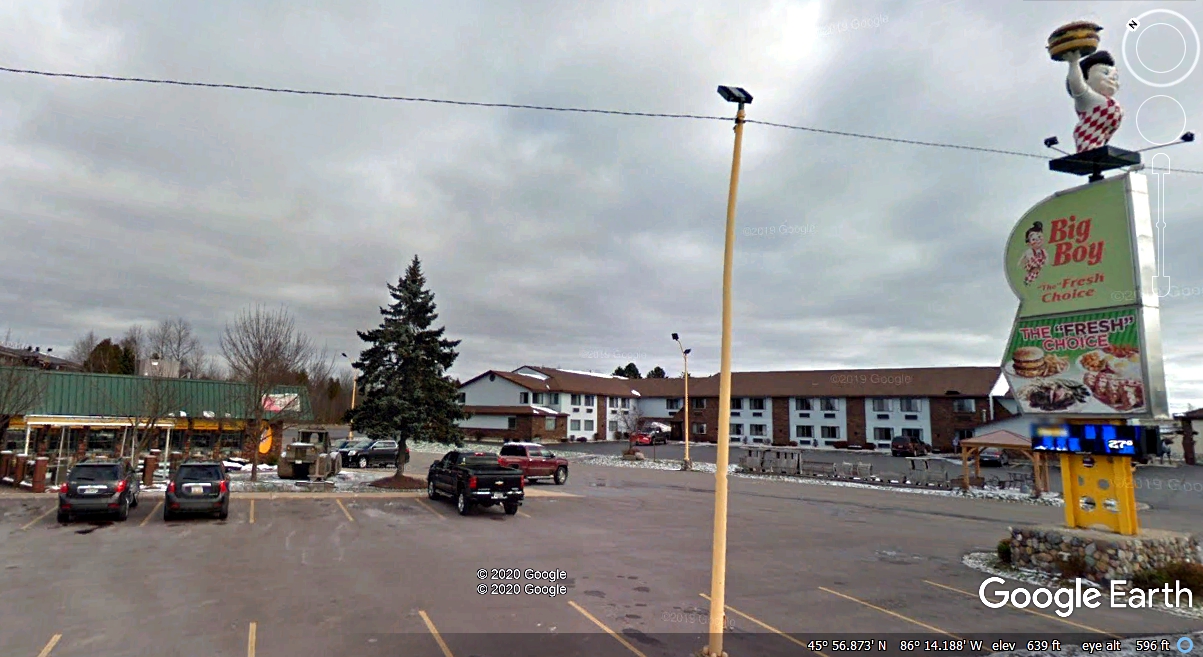 This is a Google Earth Aerial view showing two areas where we stopped to take photos along the north shore of Lake Michigan including the Manistique Light House.  It also shows our BLUE GPS ground track when we stopped at the Big Boy restaurant to take some photos you will see later. 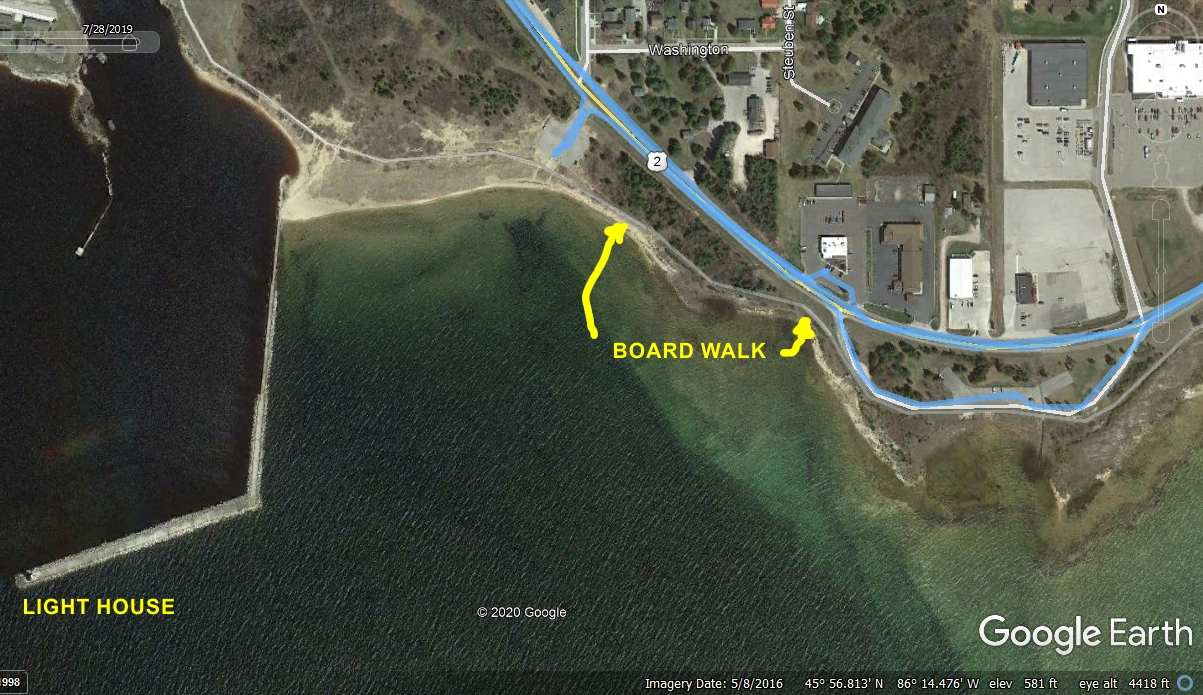 This was Linda's first photo of Lake Michigan when we pulled into the park nearby.  She had a hard time accepting waves on the lake since we have the Atlantic Ocean on the East coast of Florida.  I had to remind her this lake is over three hundred miles long from Gary, Indiana to this point at Manistique, with wind driving these waves onto the north shore where we are standing.  This image was taken the last week of July 2019. 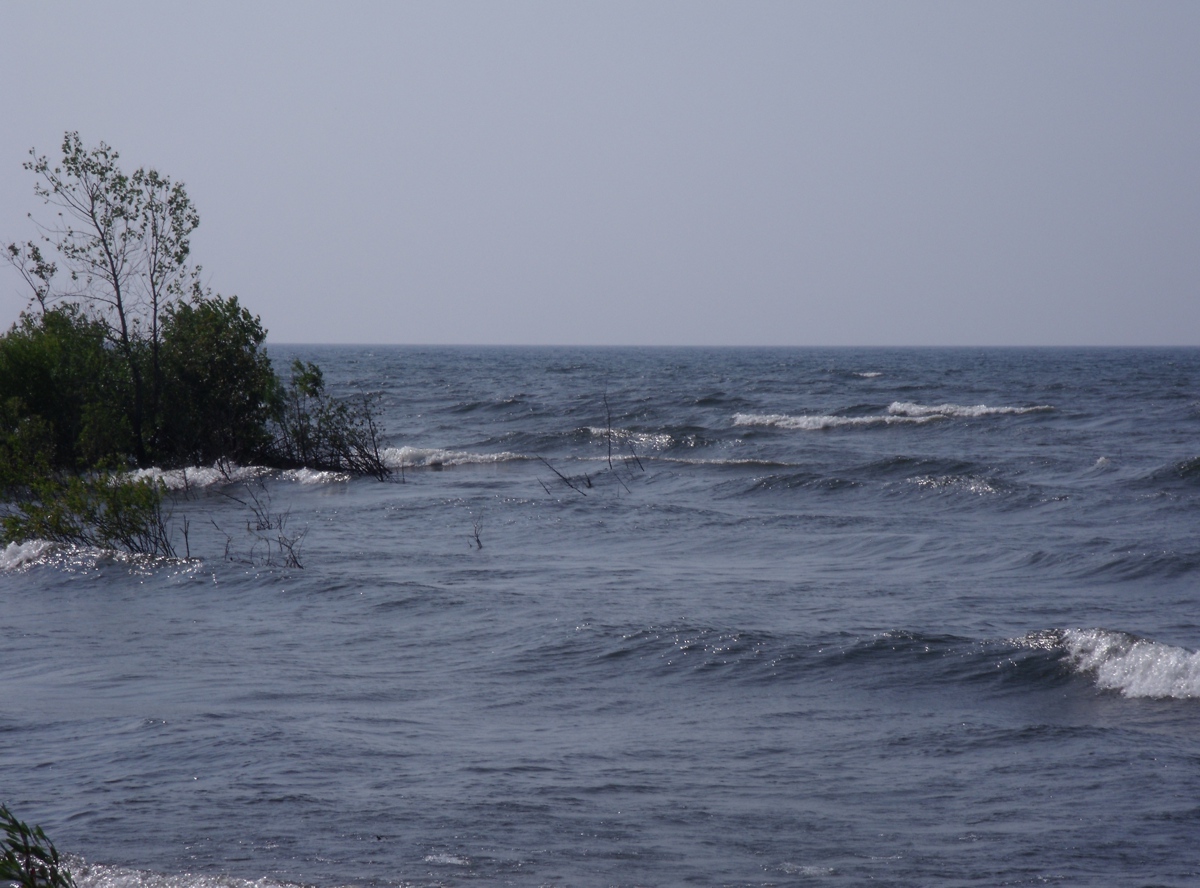 This is the second photo Linda took at the first view point.  Again, her focus was on the white caps in the waves. 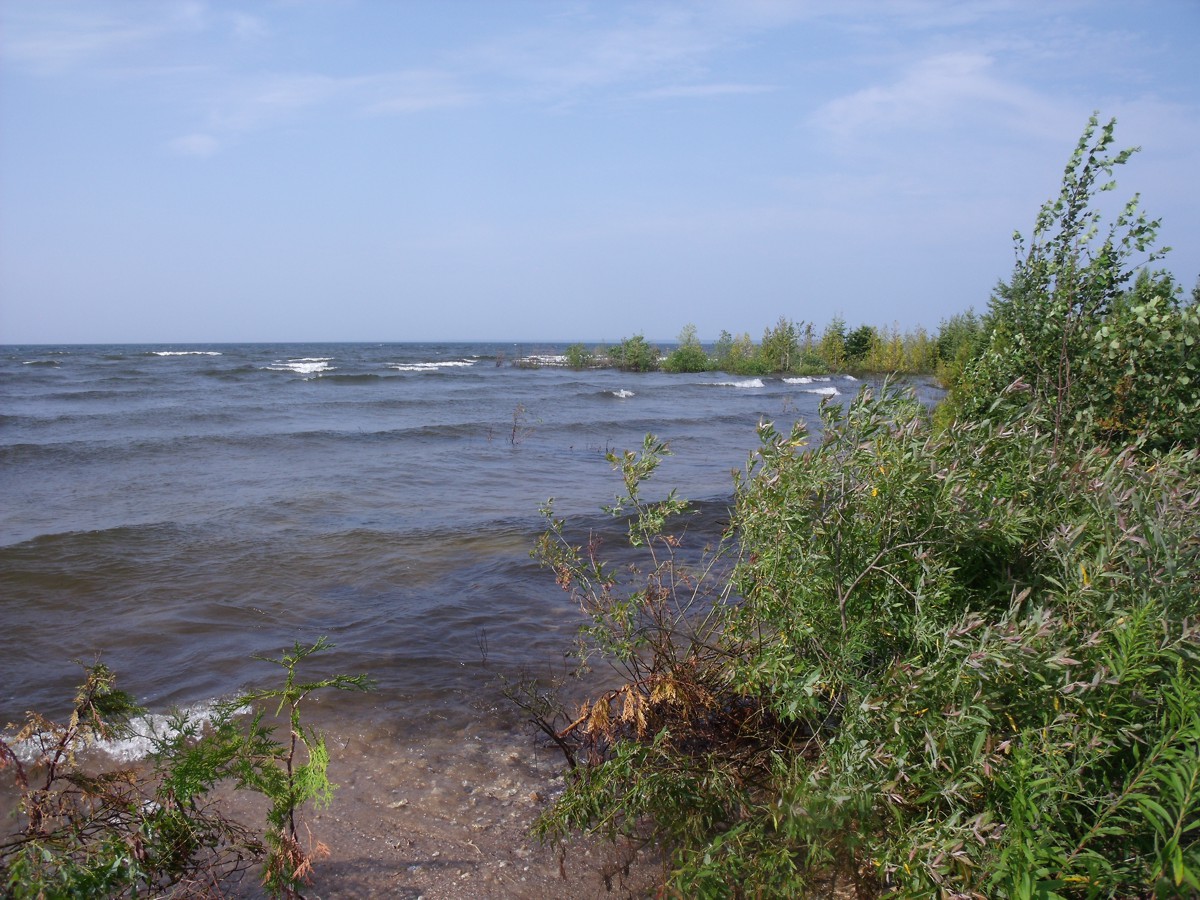 Linda looks at a plaque near the shore. 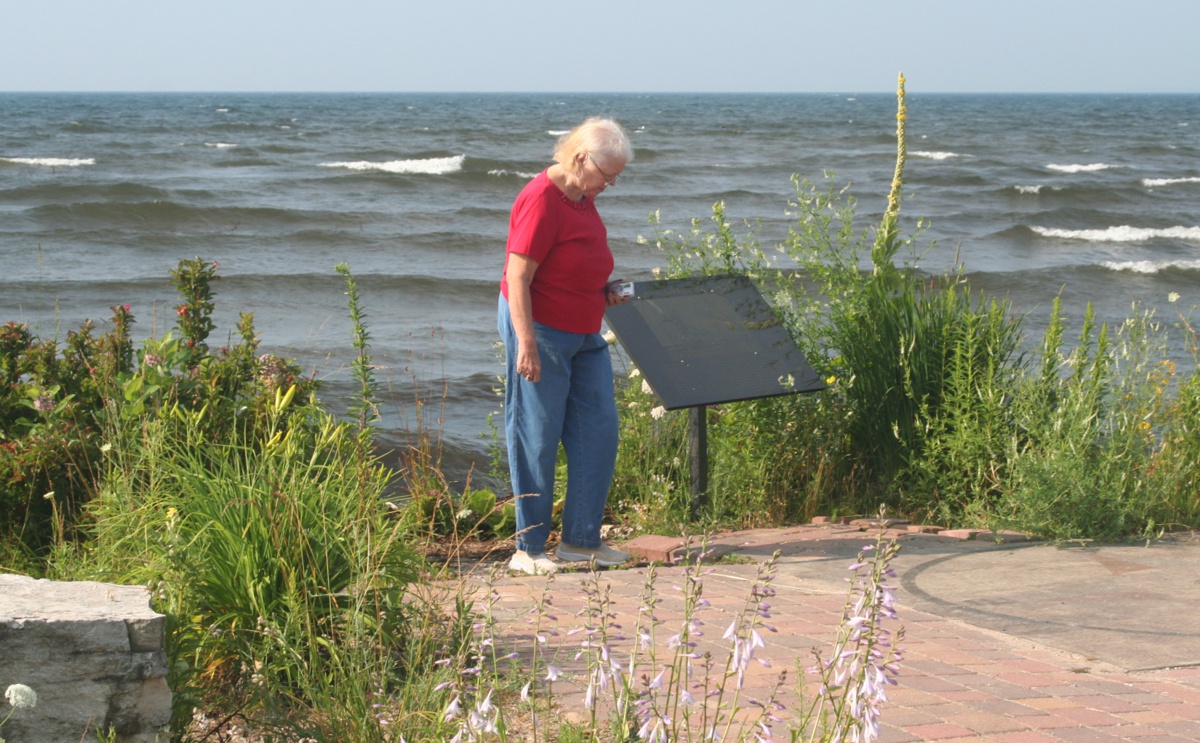 Here is an image of the plaque seen with Linda in the photo above.  A Google search for the CARL D. BRADLEY gives the complete story about a winter storm and the loss of the ship and most of the crew. 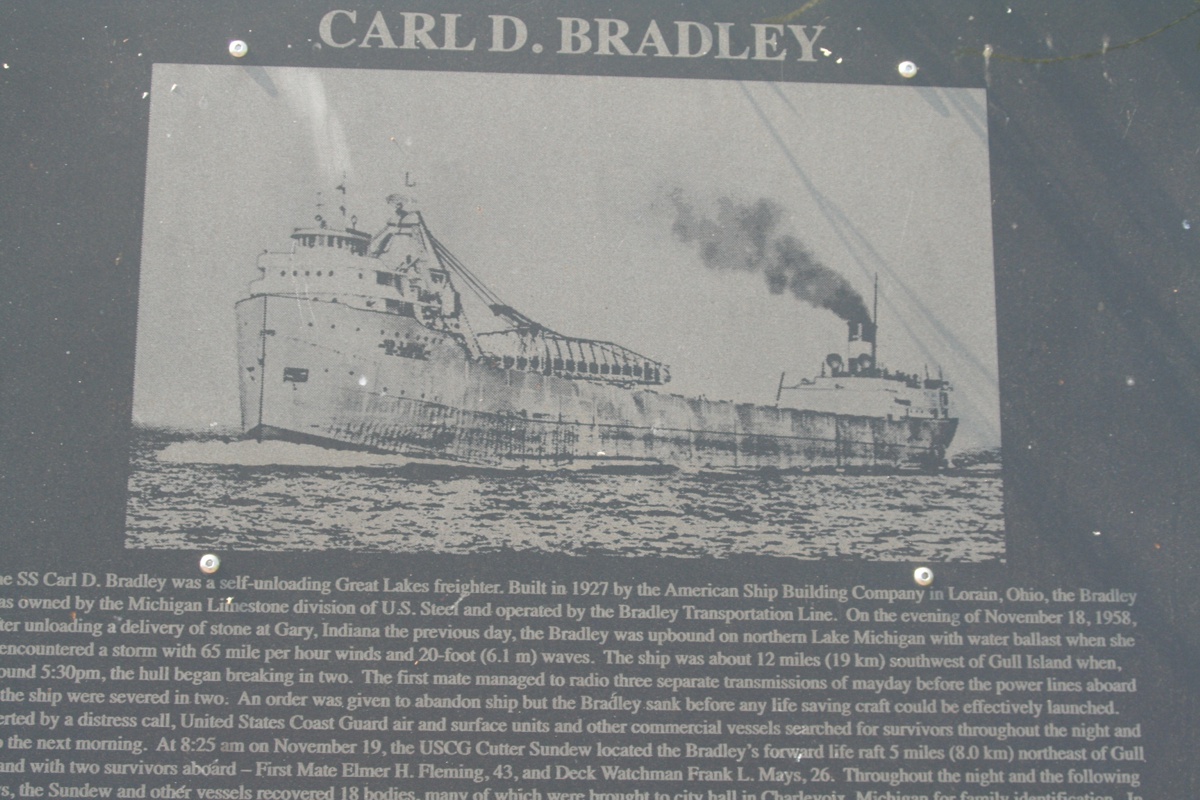 This park bench honors the ship and crew. 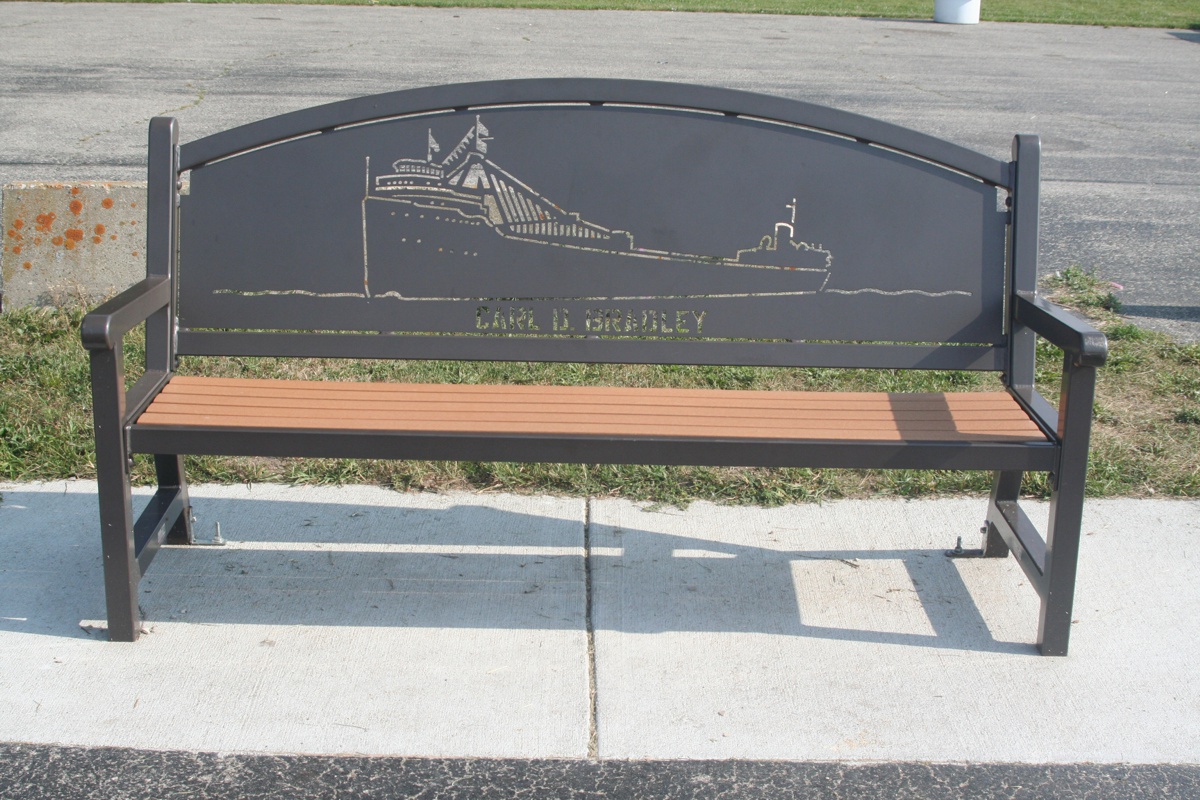 I watched Linda taking a picture toward the Manistique Light House. 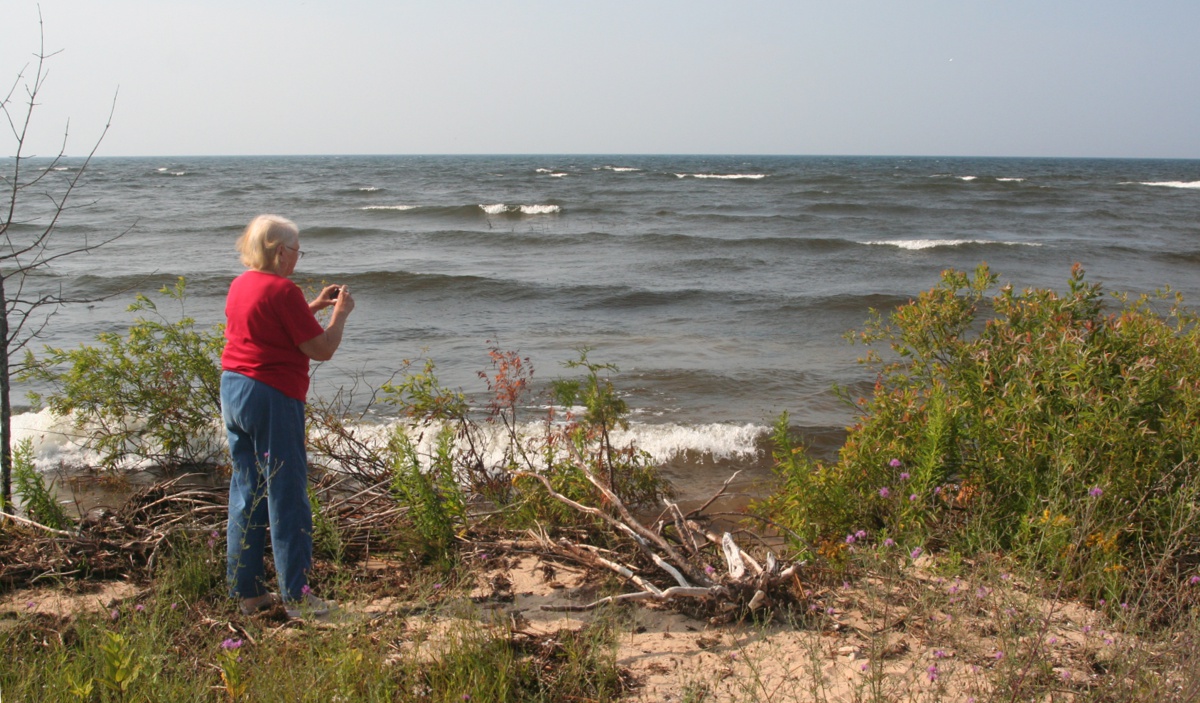 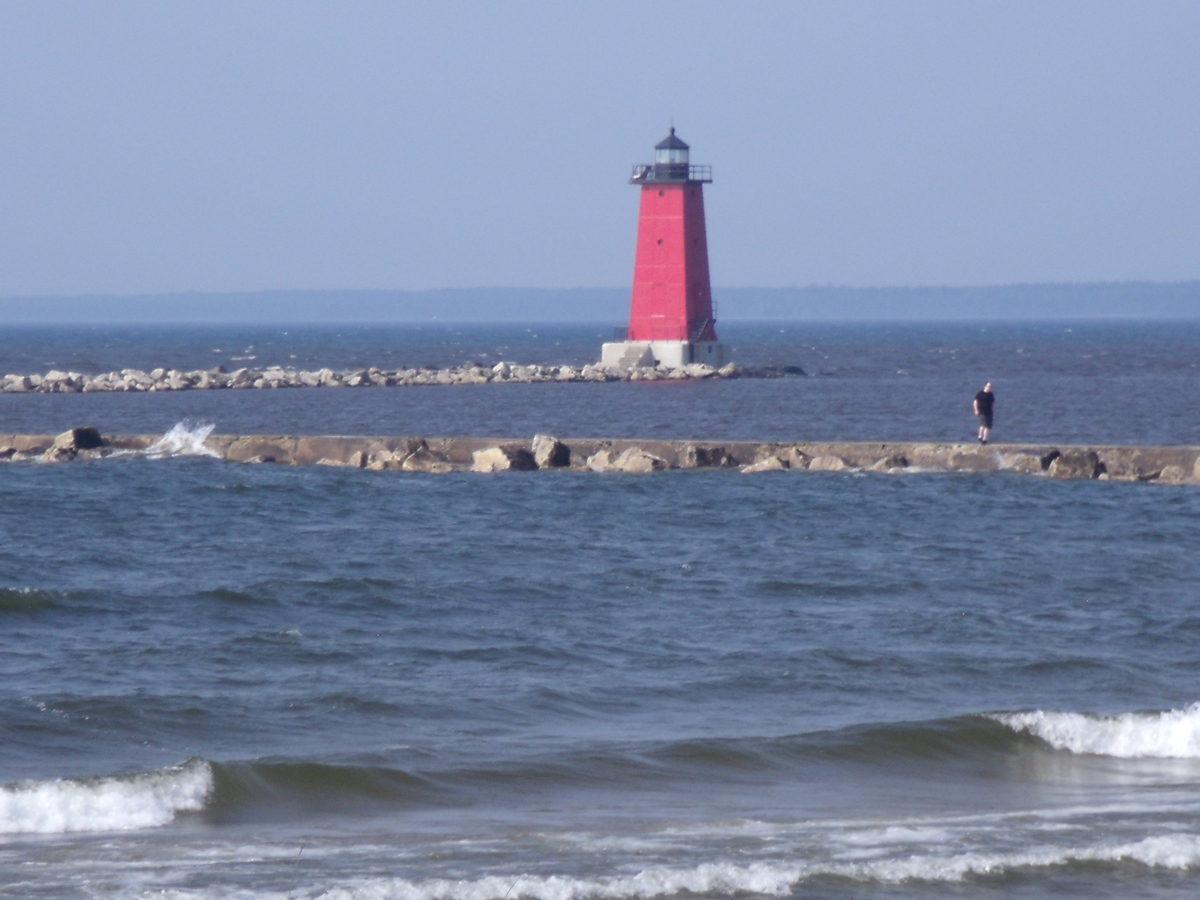