Monday, July 26, 2004: I spent Sunday night in Vincennes, Indiana and headed north on US 41 the next day.  I stopped for an "early" lunch at 11:30 Eastern Daylight Time on my watch.  The clocks here said 10:30 AM since this part of Indiana does not observe daylight time.  This Burger King is located at the corner of US 41 and US 36 at Rockville, Indiana.  This photo is looking East on US 36 in the direction of the historic downtown district. 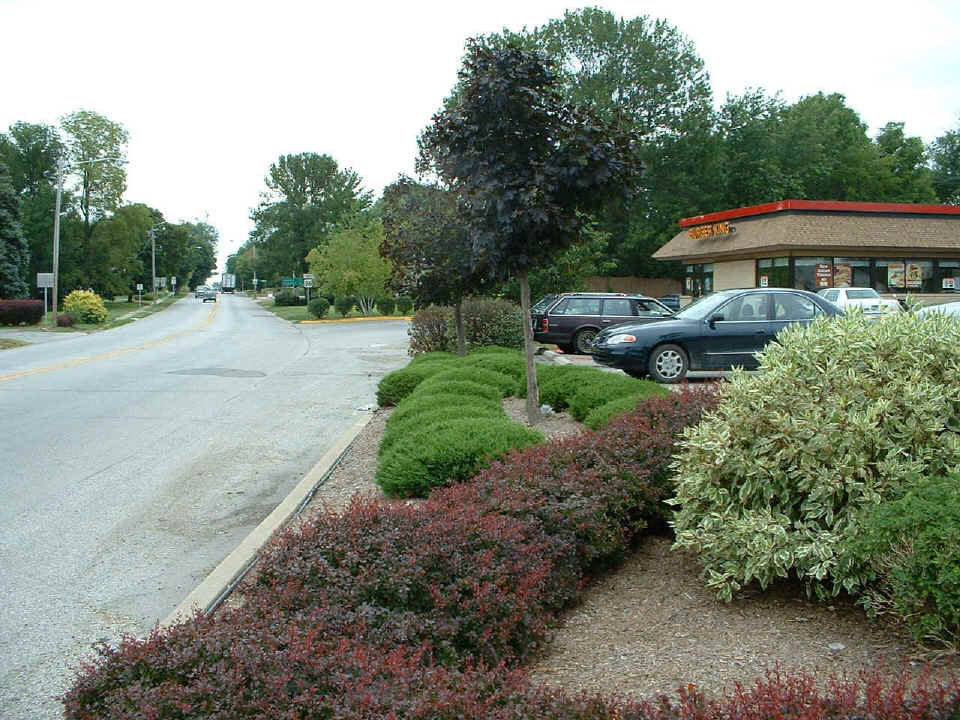 On the northwest corner is this new drug store, while on the southwest corner is a modern gas station.  This is quite a difference from the very old buildings seen yesterday back in Guthrie, Kentucky. 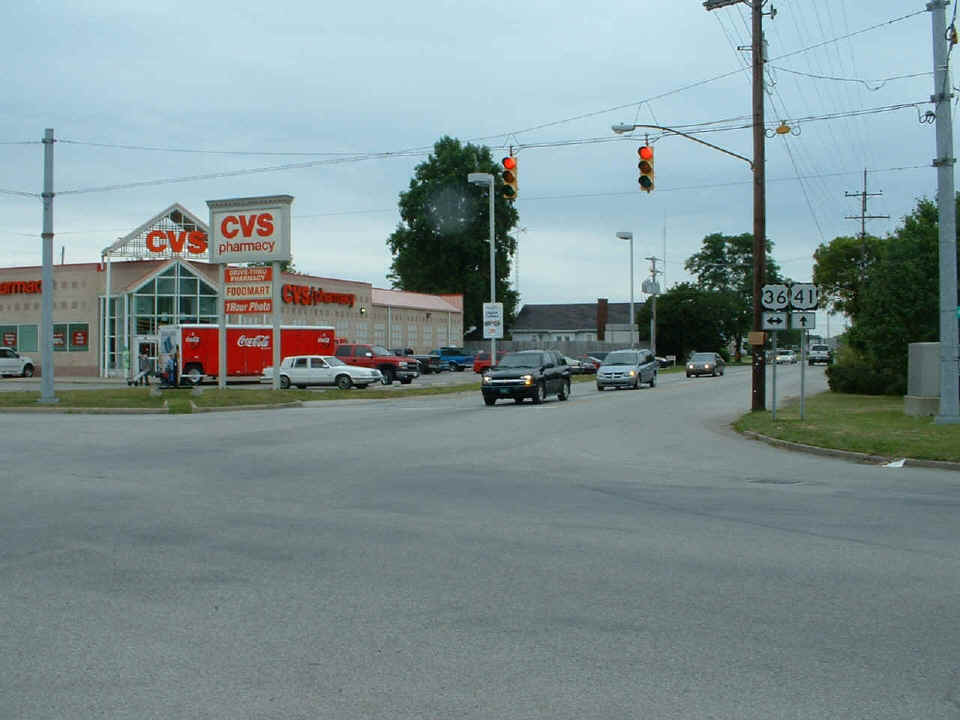 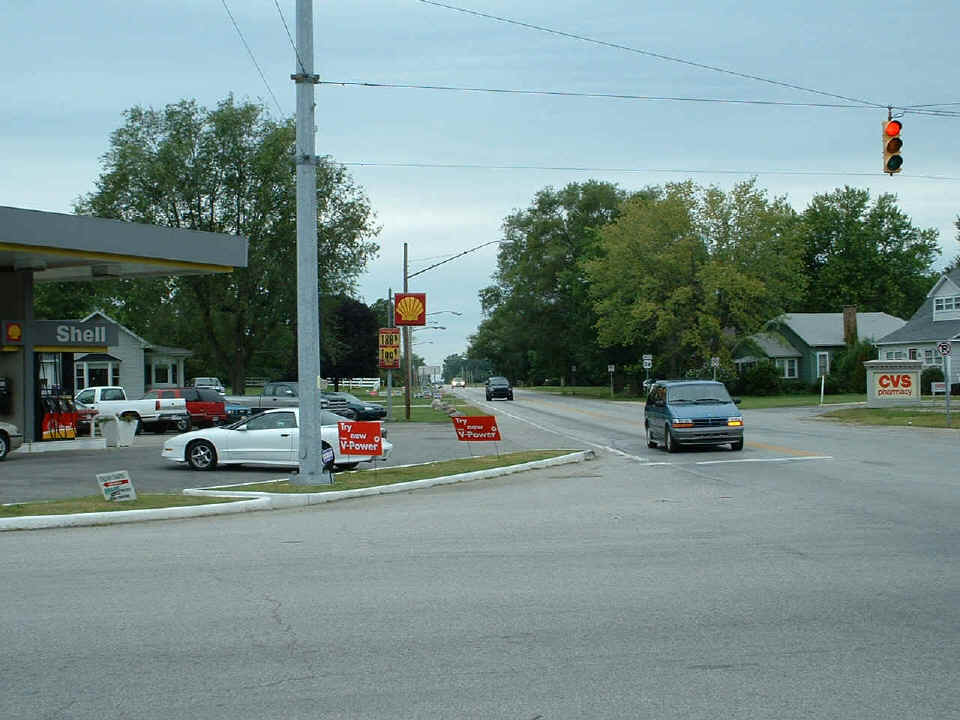 The historic district of Rockville shows the better-kept side of mid-America.   This restored movie theater is one block from the town square.  They are running a reduced schedule compared to some movie megaplex centers in larger cities, but  they are surviving and showing current movies on their ONE screen.  Those glass doors are like the ones in the Wink Theater in my home town of Dalton, Georgia. 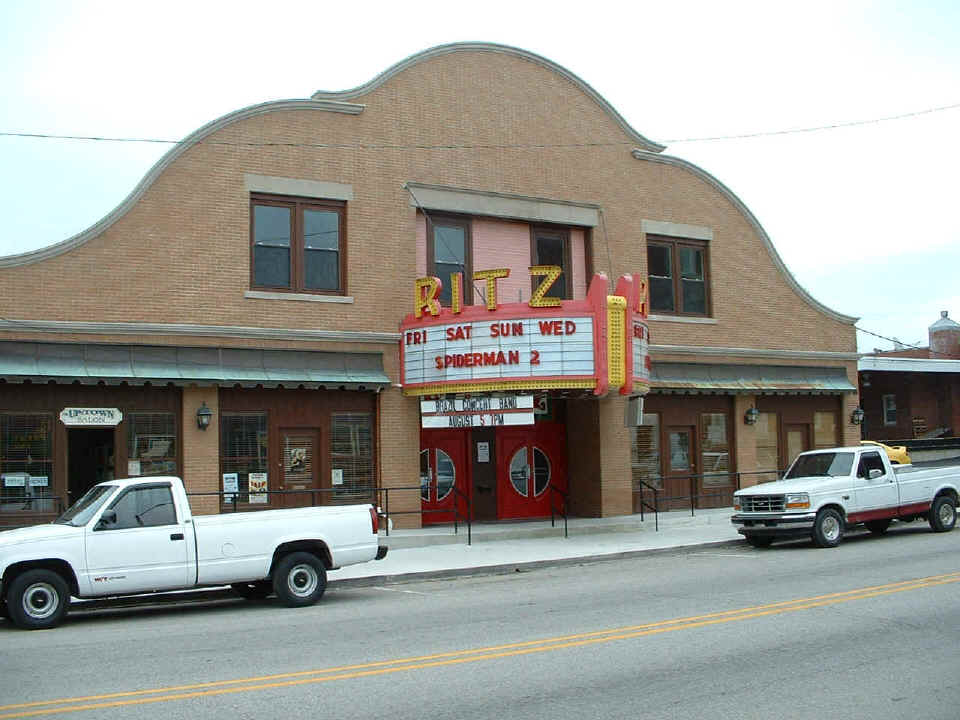 The US post office is on the northwest corner across from the town square, while the church shown in the second photo is in the next block north of the post office.   The influence of European architecture in this church cannot be overlooked. 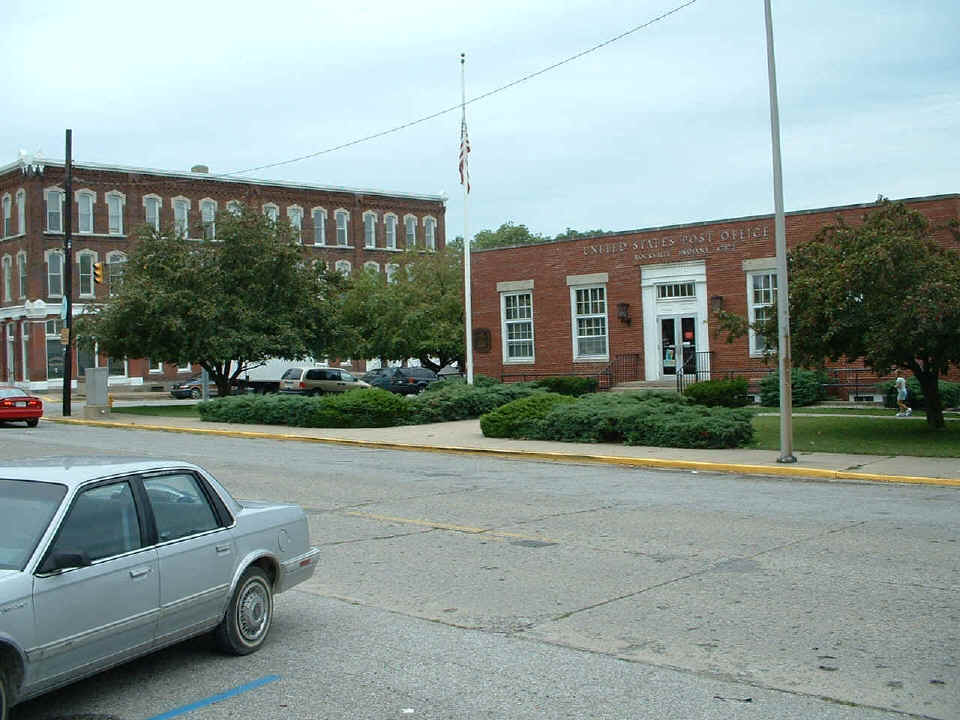 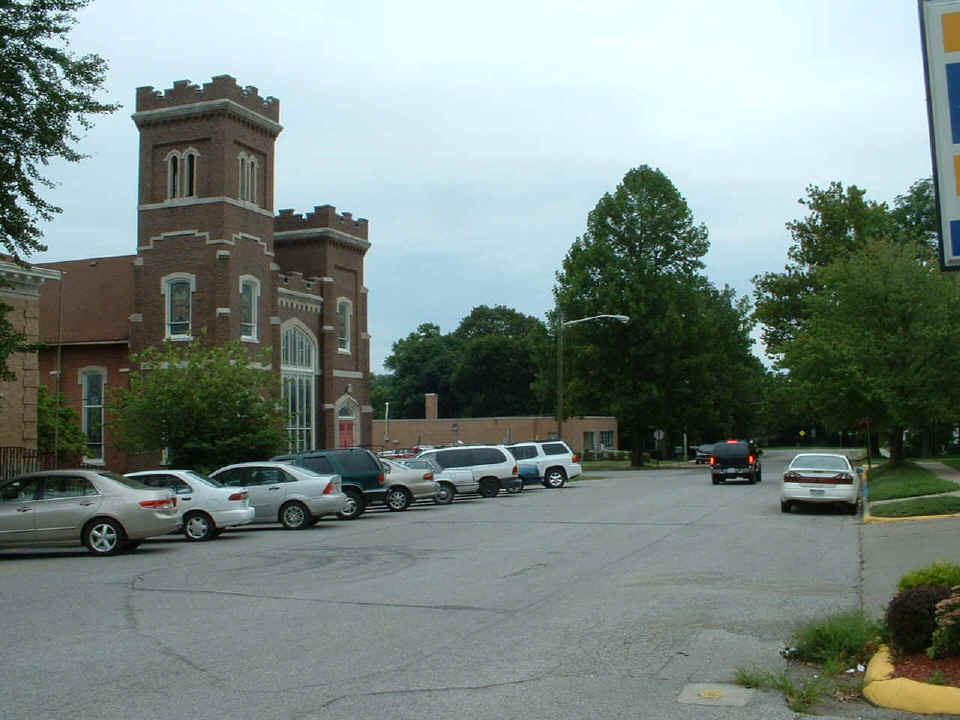 At the center of the town square is the court house of course.  This French Provincial building and some of the store fronts along the town square house the county government offices. 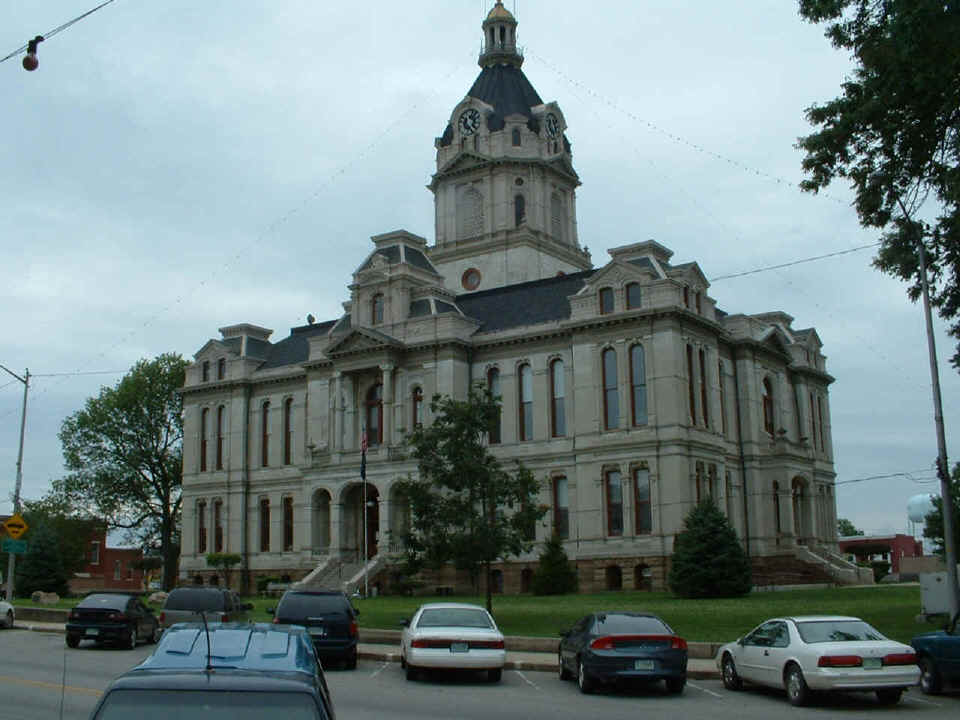 Facing the court house from the north side of the street is this row of buildings still occupied by local businesses.  Wal-Mart has not invaded this town and it shows in the commercial district that surrounds the town square. 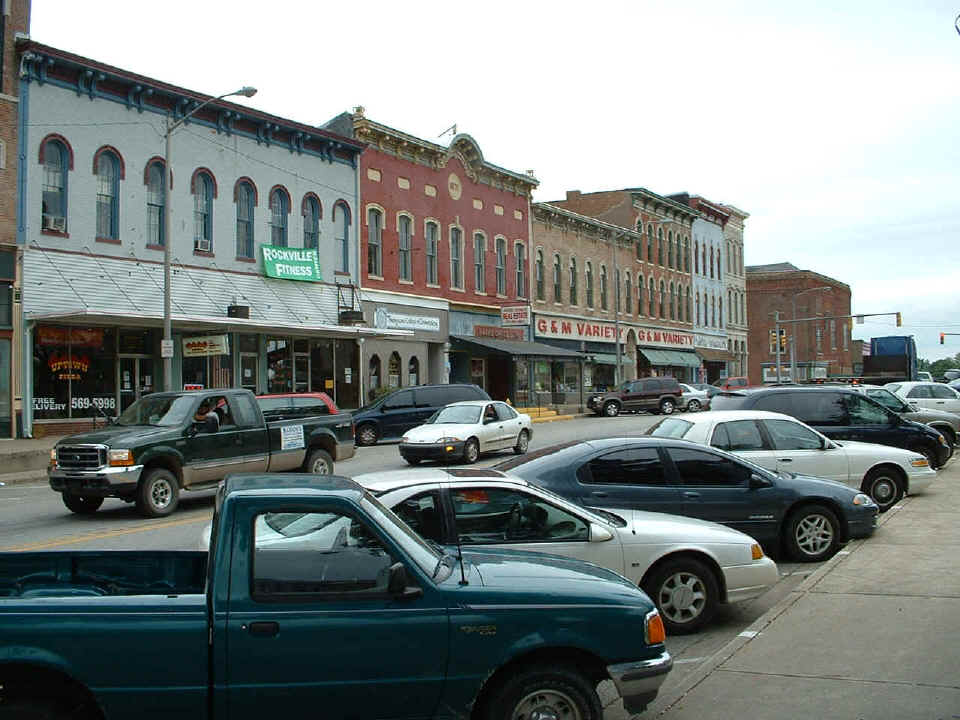 About 70 miles further north is the very small town of Kentland, Indiana with its rural one-runway municipal airport.  I noticed it coming up on my GPS as I was driving up US 41.  My attention was also drawn to it by the pilot of this Piper Super-Cub 105 making a high approach to runway 9 as I was nearing the airport.  He was low on fuel and came in to re-fuel.  If he had run out of fuel and came in short, he would have ended up in the bean field on the west end of the runway.   The rest of the airport was surrounded by tall corn. 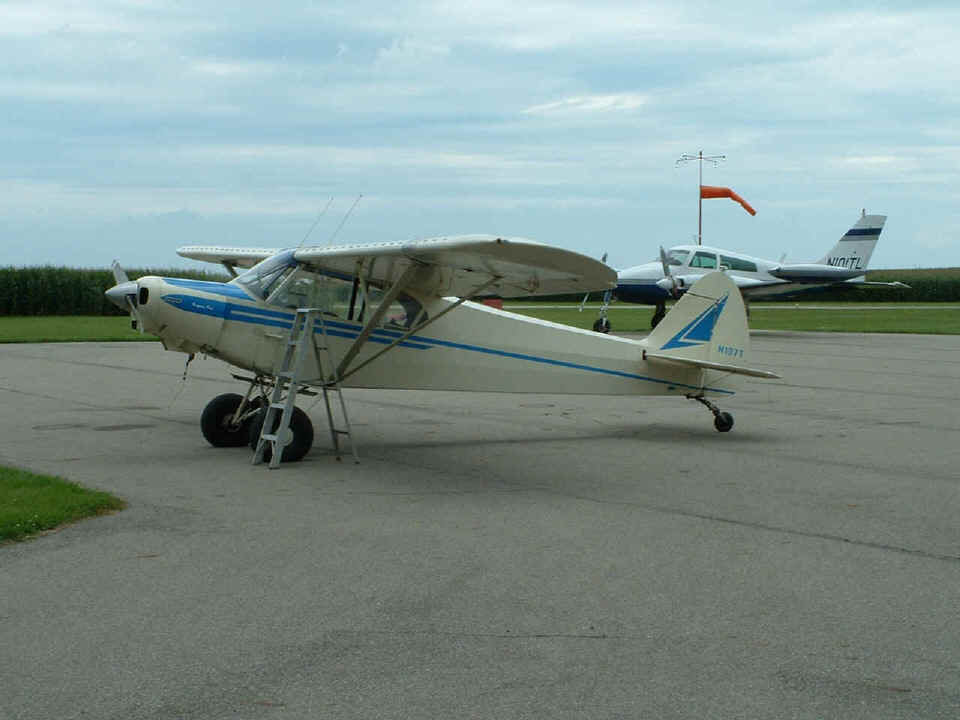 This little airport is a one-man operation where the manager Harold pumps the gas for you.  By the way, the pilot of this plane was frustrated at an airport west of here on the Illinois side of the line.  He had tried to buy fuel there but there was a problem with the fuel pump.  When he got here, it required 36.2 gallons to fill the tanks.  The airplane only holds 36 gallons.  That explained the high approach he made to the airport.  He wanted to be sure he could glide to the runway if the engine quit.  He managed to pull up to the pumps with the engine running.   Harold was telling both of us about a guy he found pushing an airplane up to the pumps one day who did run out of gas on "final" approach.  The fuel tanks in this old bird have fuel sight tubes allowing the pilot to see that there is still fuel remaining in the tanks. 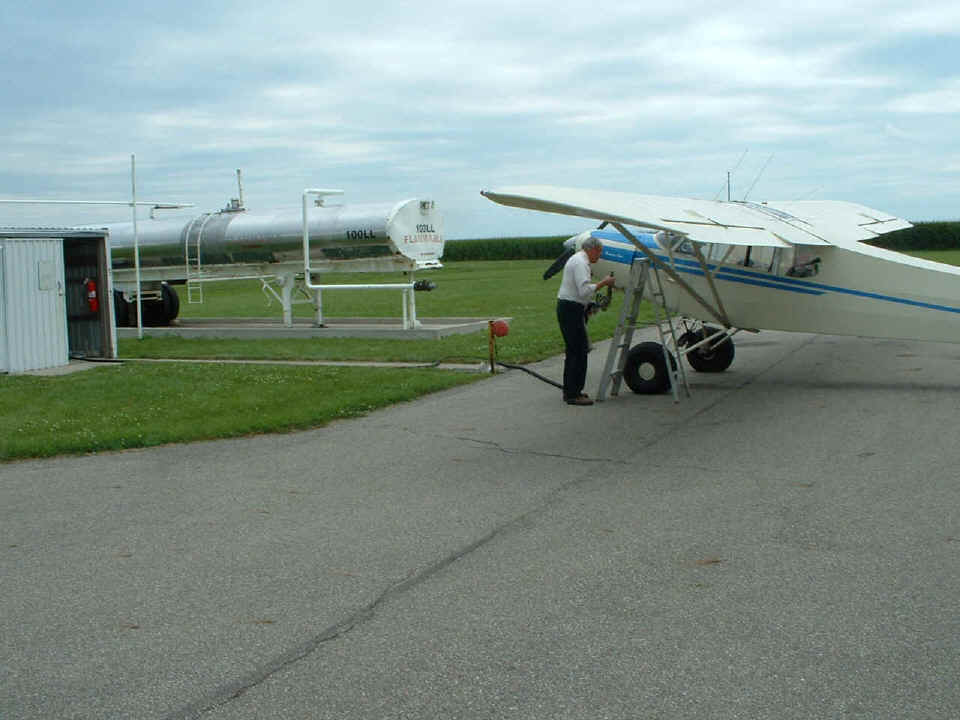 And speaking of fuel tanks, that stainless steel tanker truck is actually the "mobile" storage tank for the avgas.  The pump is in the shed with a clip board on the pump for local pilots who have keys to the shed.  They enter the amount of fuel they use on a yellow pad on the clip board.  It is still the honor system here for the locals.  Most small airports like this one have a credit card control on the pump, but not here.  Harold complained of that when we were inside later, saying that they sometimes don't work.

And just to prove his point, the credit card company had an alert on the pilot's credit card from the cancelled transaction he had in Illinois about 30 minutes before he got to Kentland airport.  Harold had to call the credit card company for approval and the lady on the other end wanted to speak to the pilot to verify his identity and find out about the earlier aborted fuel sale at the other airport.   As you can see by the smile on Harold's face, all was settled with the bank and he signs the fuel ticket for the pilot. 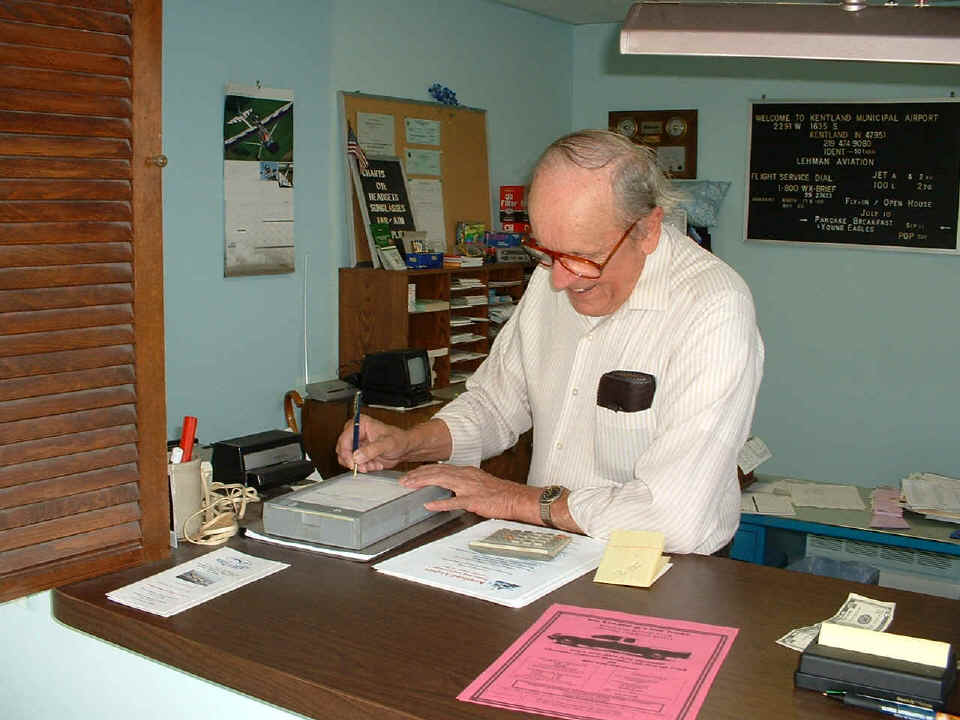 Most of the rest of the day was boring after being in the lush green country of northern Indiana.  You know, traffic, road construction, Chicago, Milwaukee -- normal stuff.  I tried to finish this entry and post it to the web Monday night at the motel west of Milwaukee, but time and fatigue cut my online session short last night.  I am grateful for the high-speed internet connection in this hotel.  More for you all later on in the week -- and of course, some photos from Oshkosh.