Thursday, July 29, 2004: I had a day to visit with two of my cousins in northern Wisconsin yesterday.  Traditional "Southern" meals were served since we are all from the South.  I got on the road this morning and drove up to the northern end of US 41 to see the sights along the shore of Lake Superior.  I have traveled up and down US 41 for years, but this is the first time to the northern end.   There were many places along the way where cell phone service was poor to non-existent.  It got me away from my job for a few hours, but that was not the plan.   As you can see, the pavement ends at the left of the photo and there is only this paved circle for traffic to turn around and head south again. 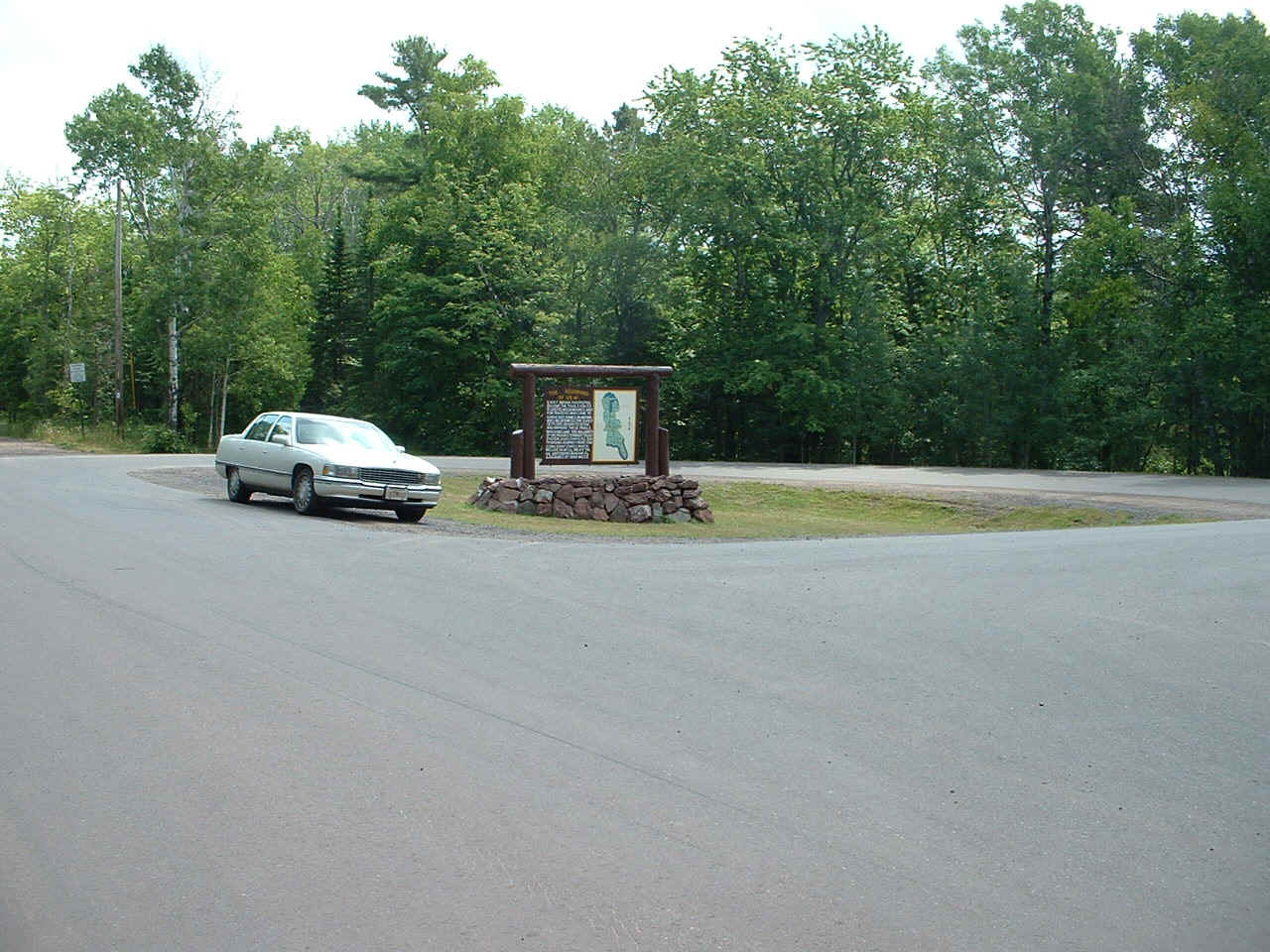 Speaking of heading south, here is what you see looking back down the road.   This is inside the Fort Wilkins State Park near Copper Harbor, Michigan. 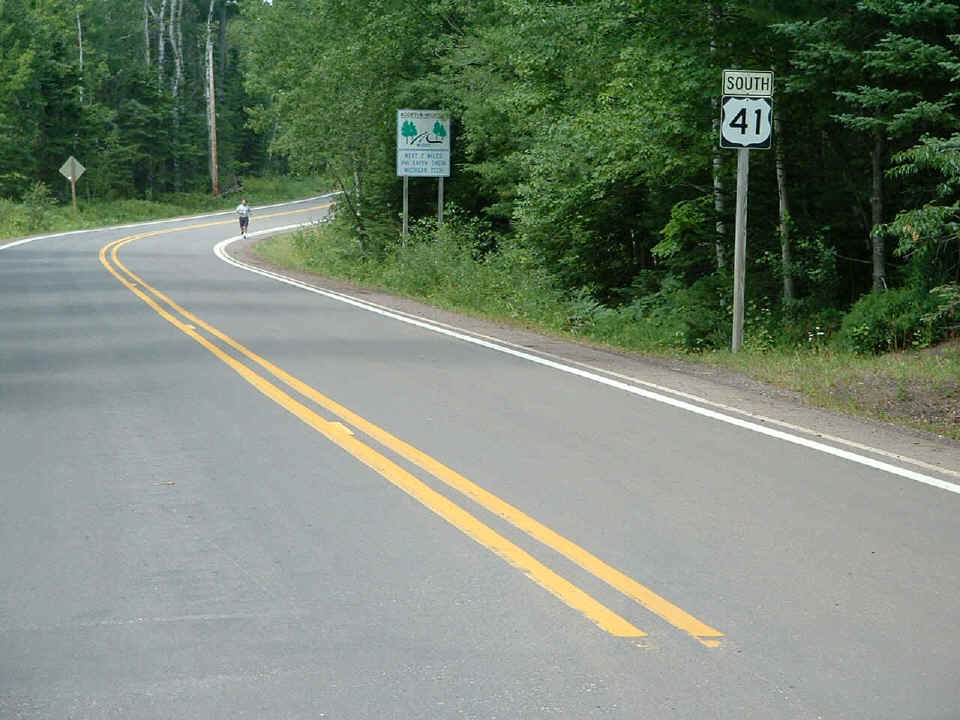 Right before I drove away, this family showed up and I realized that if I did not take their film camera pictures, Dad would not be in them.  The little girls got a kick out of seeing this picture on the screen of my digital camera.  I panned and zoomed in on each of them on the camera's small screen. 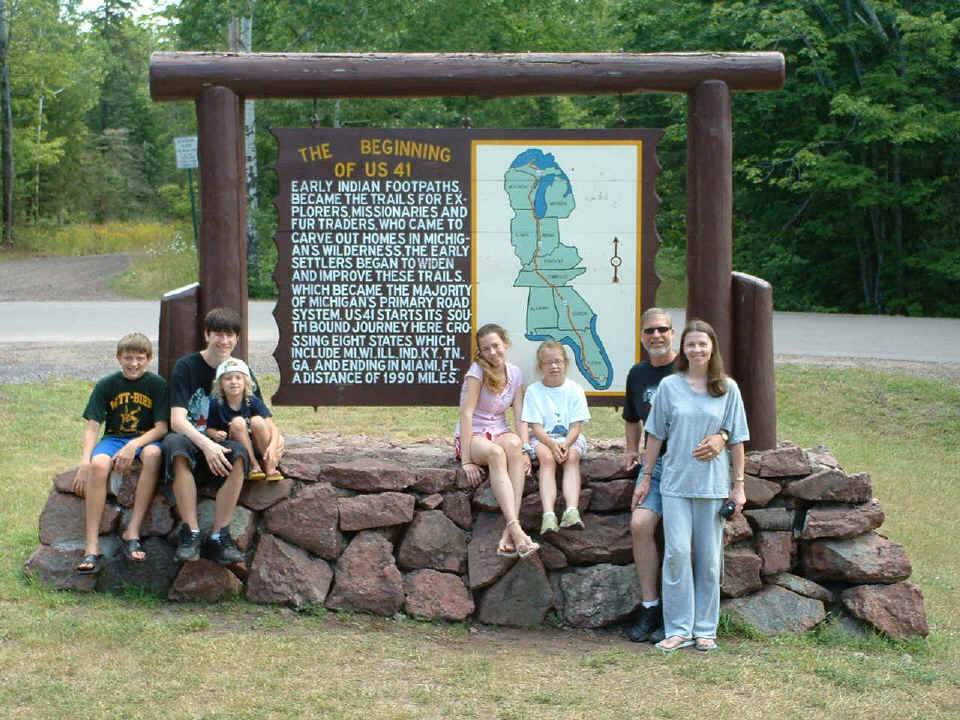 This is the view of the Copper Harbor Light House from the roadway looking LEFT as you pass by the main gate of Fort Wilkins State Park on the RIGHT side of US 41.  No, I did not take a picture of the park ranger in the gate house.  I did not want to bore you that much! 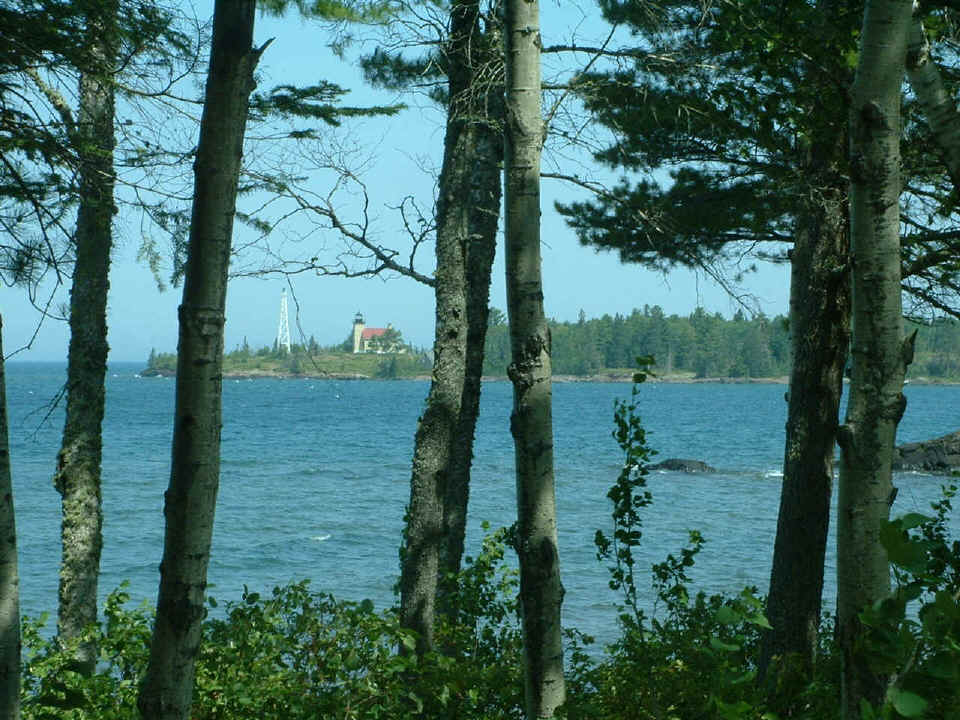 For you antique car fans, this well-restored Ford A model should make you happy.  A friend of my in high school found a 1931 Ford Crown Victoria similar to this one and painted it with similar colors during the restoration.  This one sits in front of a motel in Copper Harbor. 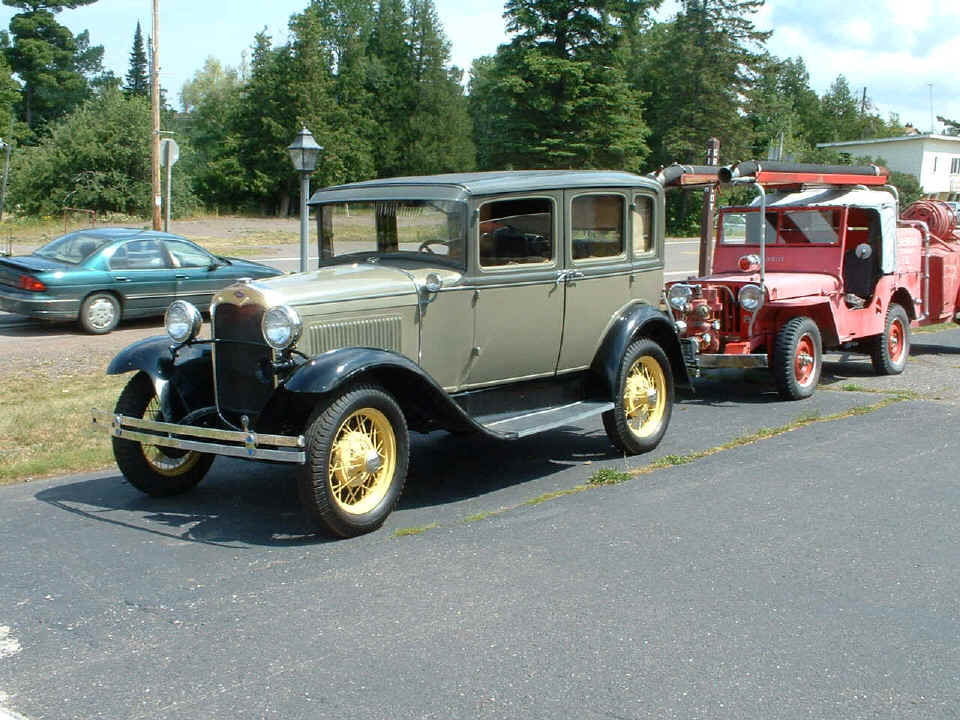 Here is a bit about the history of Lake Superior. I just noticed the name of the French explorer as I was posting this photo.  I visited my older cousin near the little town of Brule, Wisconsin.  The Brule River came right by the back of her house.  On the way down to Green Bay, I crossed the Brule River again at a point where it formed part of the state line between Wisconsin and the U.P. of Michigan. 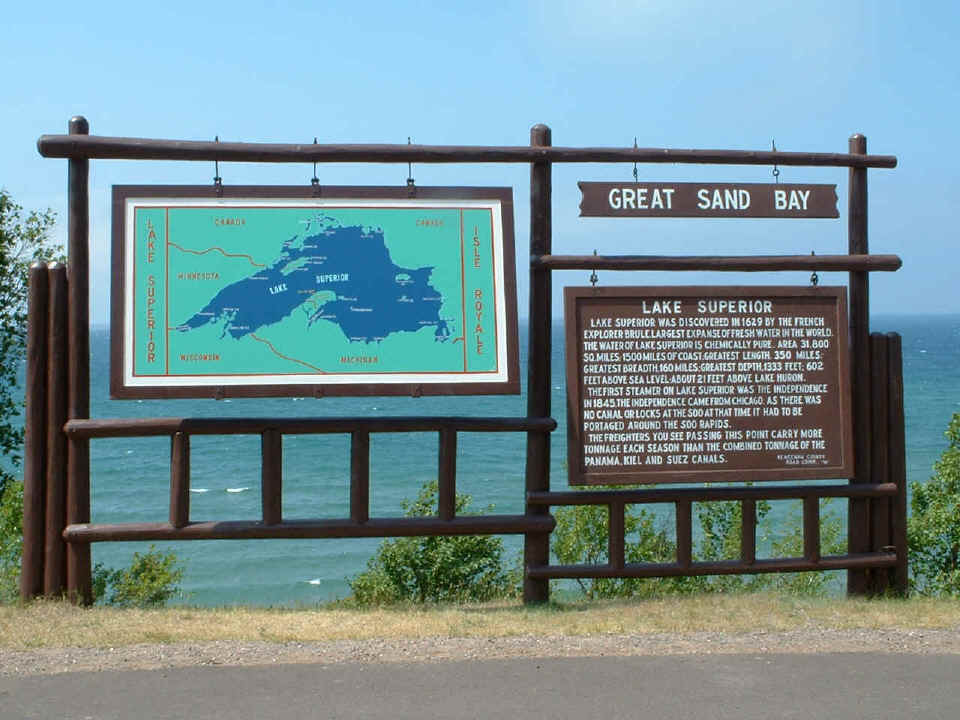 Here is the shoreline of Great Sand Bay. 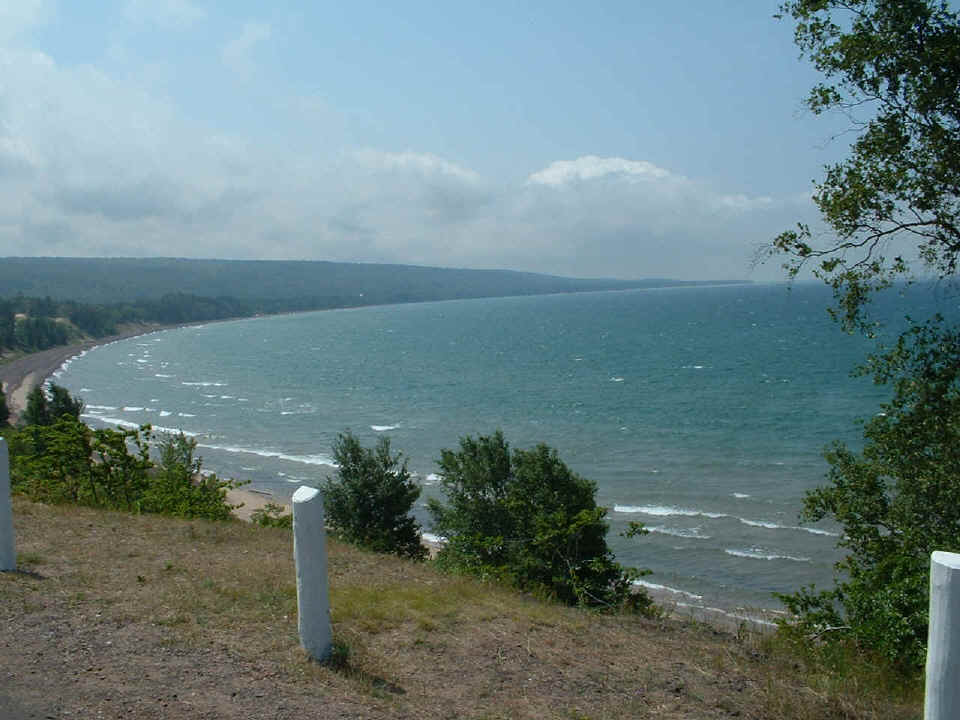 Since this is the northern-most county in Michigan, they have claimed to have record snowfall amounts east of the Rocky Mountains.  Here is how they drive home the point. 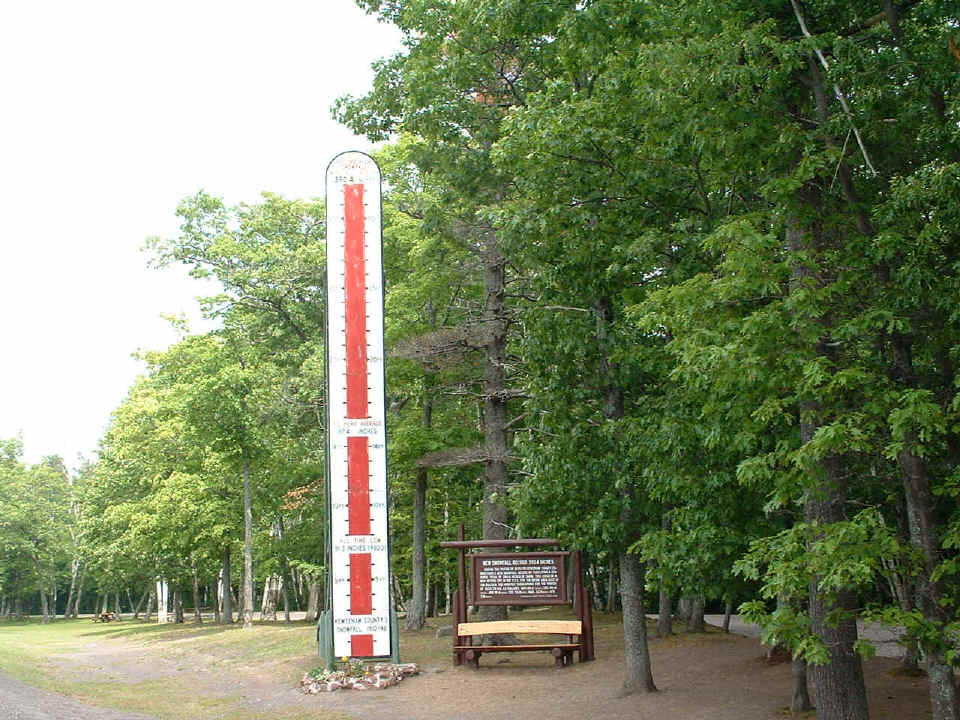 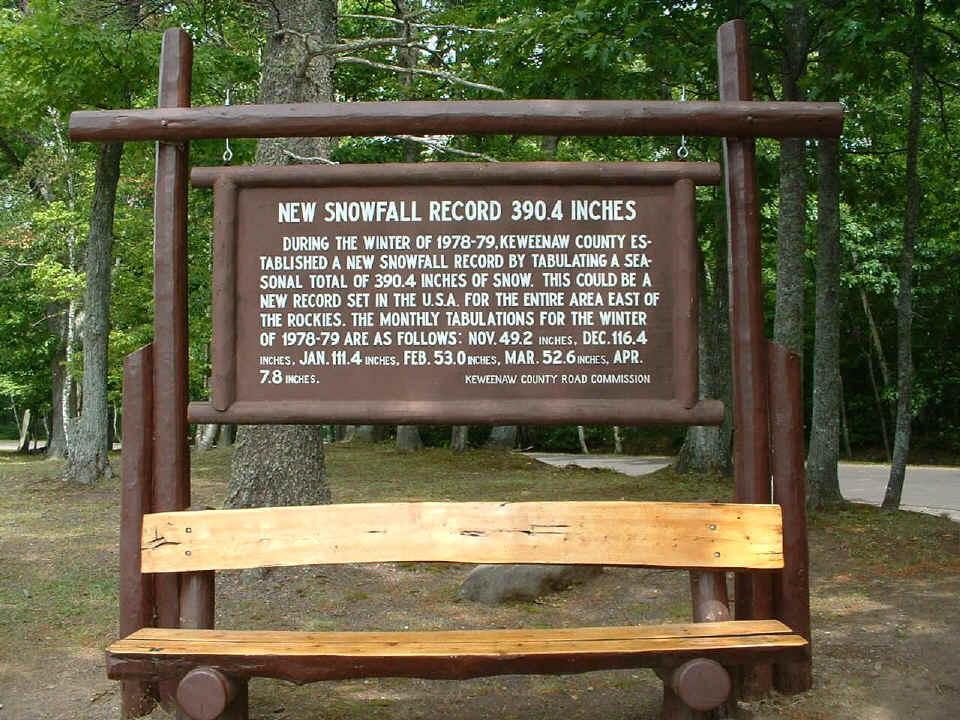 Luis, if you think the idea of gun boat diplomacy is dead, think again -- although this one is on the rocks.  Or maybe I should say, IS MADE of rocks!   Some of the "guns" have been broken off from the sides.  You can see one of them remaining on this side of the "boat" by looking at the shadow amidships.  Most of the pipe guns were in place on the other side, but the sun angle was best on this side to show the colors in the rocks. 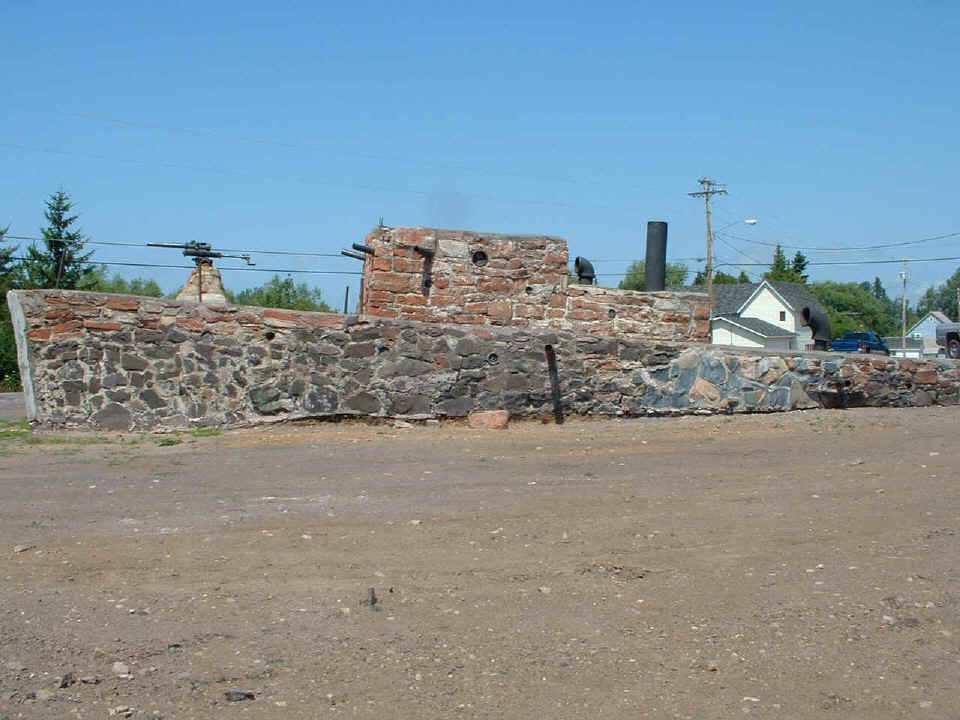 The last town going north toward the end of US 41 that has a Burger King and a shopping center with bank, etc. is the "Village of Calumet, Michigan."   This is the town hall one block off of the one-way, cobble-stone main street with all the classic old buildings on it. 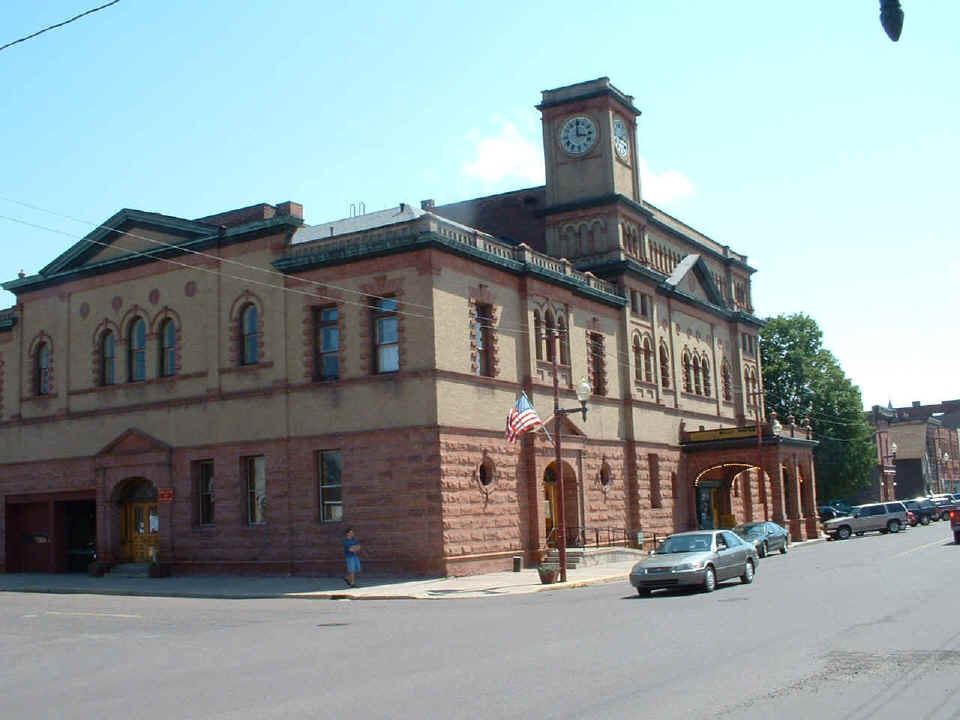